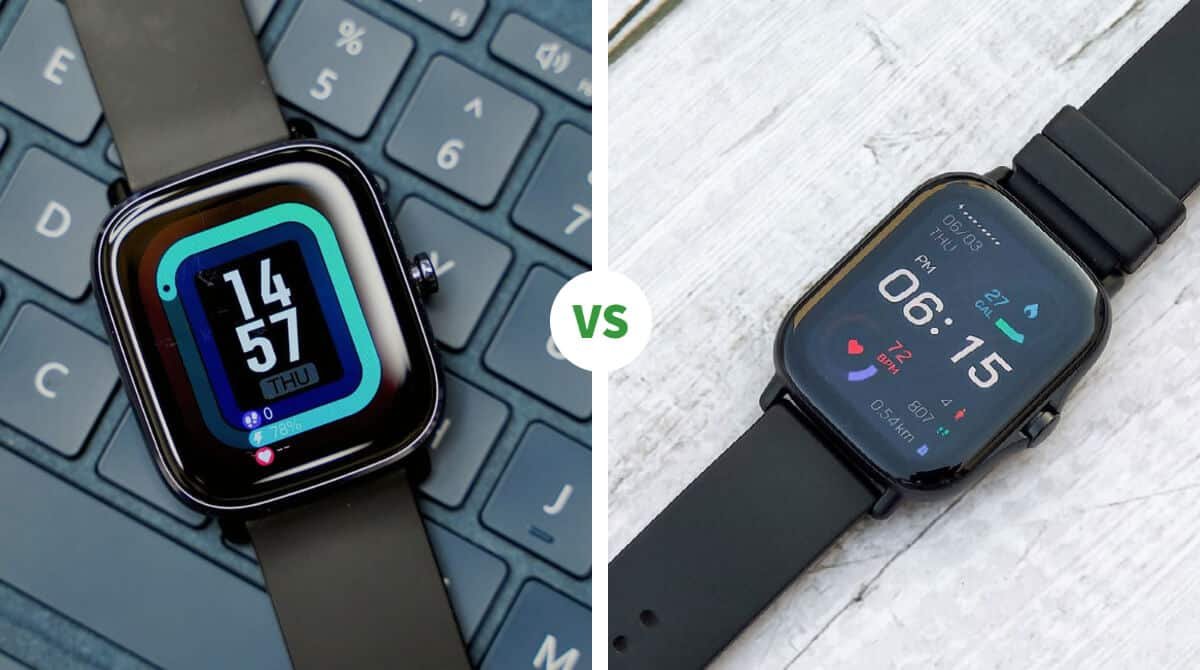 At the beginning of the year, we told you about the excellent fitness watch Amazfit GTS 2 from the Chinese company Huami; we propose expanding your horizons with one more affordable model GTS 2 mini. What are the common, and what are the differences? We will find out further, and at the same time, we will understand whether it makes sense to overpay.

The models comes with identical magnetic charging cables with two connectors, and documentation.

The most important element of any smartwatch is, of course, the display.  The TFT-matrix with a significant “chin” and lack of auto-brightness is noticeably inferior to colorful AMOLED panels with symmetric frames and AoD support.

In addition, it is worth paying attention to the curvature of the glass: the GTS 2 has a “noble” 3D curvature, the GTS mini has good 2D is almost flat. In the first two cases, the devices get extra points for aesthetics, but it is much easier to apply a protective film on a flat display.

Both devices are equipped with a physical T-shaped button on the right side, but the older watches have a decorative overlay that hides sharp corners. At first glance, there may not be much sense in this, but in fact, the design does a good job of saving you from snagging your clothes. Although the button rotates and visually resembles the Digital Crown on the Apple Watch ( review of the sixth version), it is just a button. Rotation is not functional here.

Although Amazfit GTS 2 is slightly larger than others, all watch models under consideration have a similar form factor. Square glass stones a la all the same Apple Watch, except that the junior model is not easy to confuse with an expensive analog.  If you like that – great! If not, there is a direct road to the GTS 2 and GTS 2 mini. They have a much more serious aluminum frame, and in the case of the mini, it is chrome-plated.

The watch is equipped with the same set of biosensors and almost does not differ from the back. As well as the attachments for 20 mm straps, this is a standard clamping mechanism. And all the devices can withstand up to 5 ATM underwater, so the shower and the pool are not afraid of them.

The branded application gives access to various watch faces for every taste and allows you to make your own based on several presets. 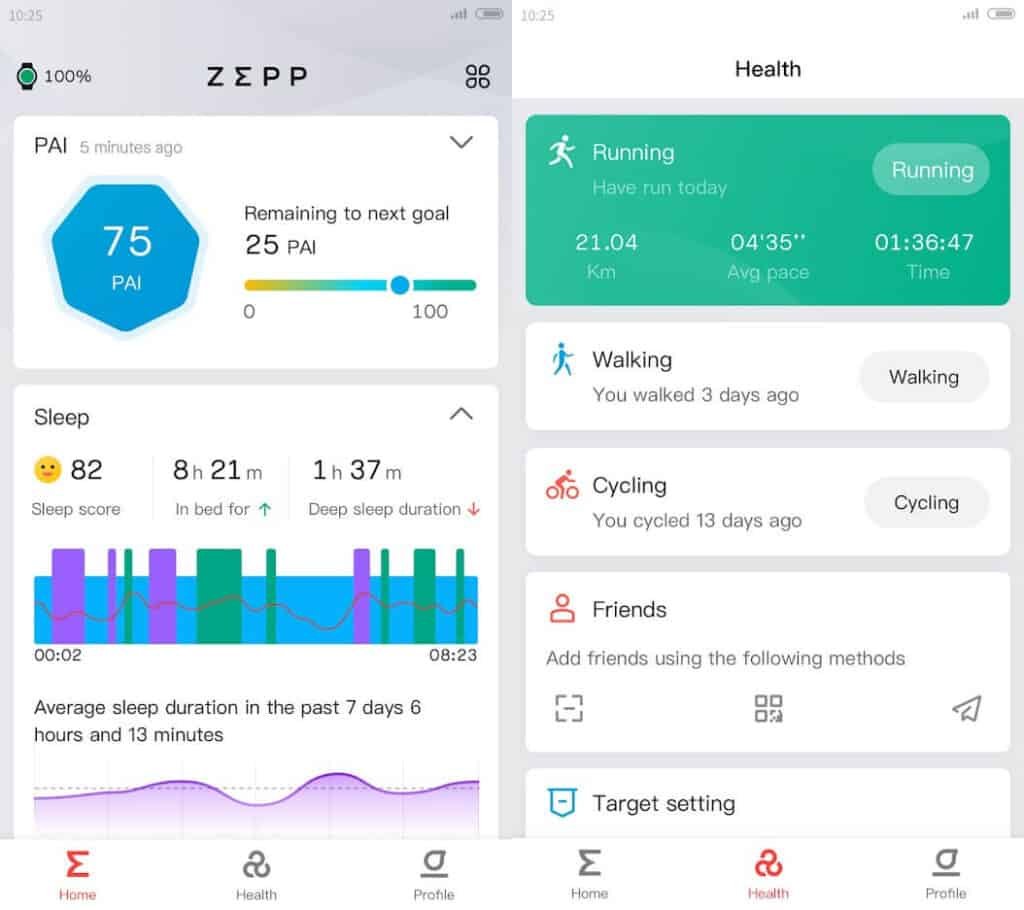 The watch works great with the proprietary Zepp application. After a simple pairing procedure, Zepp will open both a bunch of settings for the watch and an intelligent aggregator of collected data. The dry numbers of the steps taken will turn into pretty graphs, and the rating system will also tell you how well / poorly you slept at night and advise what to do about it. Also, in Zepp, a “white sheet” and conditions for the arrival of notifications on the clock are configured.

Gestures and buttons control all three models. The logic of the shell is the same, but there are still some nuances. The first thing that catches your eye is the difference in the responsiveness of the systems: the GTS 2 gives out a pleasant frame rate and only sometimes allows itself to twitch the animations a little, while the GTS 2 mini are not to say that they frankly slowed down, but the smoothness of the work is noticeably lower.

Navigation through the system is quite simple and intuitive: there is a curtain at the top, at the bottom of the notification, widgets are located horizontally, and a button press opens a menu with many items from workouts to settings.

Even though the devices are similar in appearance, their capacities are different. The GTS 2 mini have a slightly simplified shell compared to the older model. So, the curtain has become poorer by several shortcuts, the quick access cards have been abolished altogether, and the widgets to the right of the dial require pressing to reveal detailed information. By and large, all these are little things that rather affect the aesthetics. The only functionally important point is multitasking. While you can minimize activity tracking on the GTS 2 and turn to any other widget, the GTS 2 mini cannot do such a trick. On the other hand, you have access to music control when tracking sports, which is perhaps the most common need.

The GTS 2 has an indisputable advantage a speaker and a microphone (yes, the rest also have microphones, but they are used to control the voice assistant Alexa, so we believe that they are not). They can be used both to answer calls and to play music. That’s it, no audio notes, voice responses in instant messengers, and other things shouldn’t be expected.

The lists of supported device functions overlap in many ways, so let’s quickly go through the main list and move on to the features. So, all current Amazfit models can: measure the number of steps, calories burned, heart rate, blood oxygen saturation, track workouts, GPS location, monitor sleep (including daytime sleep), stress level, PAI (individual exercise index), measure time using a stopwatch and timer (with the possibility of their background work in the case of GTS 2), wake up with vibration, display SMS and notifications from applications (photos, stickers, and some emojis are not displayed), as well as receive (in the case of GTS 2) / reject calls straight from the clock.

Let’s move on to the features and differences:

Apparently, the devices use the same sensors: there is almost no difference in tracking different metrics. As for measuring the heart rate, the difference there also came out small (5-10 beats), but measurements should be taken on the wrist, and three hours, as you understand, do not fit on the wrist, so we will assume that there is not much difference here either.

Sports modes. There is almost no difference between sports tracking on the GTS 2 and the GTS 2 Mini in practice. It’s strange. Thinking of Amazfit, and now the older model boasts 90+ sports to track, and the content with a pitiful 50+. Another thing is that the number was finished off by far from the most popular and well-developed options.

Amazfit GTS 2 has a barometer and an altimeter in its arsenal, which will be useful for those who like to climb higher.

Amazfit GTS 2 can act as a player. The watch allows you to upload up to 3 GB of music, podcasts, audiobooks, or whatever else your soul desires, then connect directly to a Bluetooth device (headphones, speaker, etc.) and enjoy without the need to carry a smartphone—a desperately convenient opportunity for jogging and other workouts.

The devices are equipped with similar 220 – 246 mAh batteries; however, their battery should differ markedly according to the manufacturer. At about the same load, the GTS 2 mini should last 14 days. But the GTS 2 promises only 7 days, but the point is that its load included, among other things, telephone conversations.

Today’s devices are smart fitness watches with a good shell, a well-developed application, and a standard set of sensors for tracking the body’s activity.

Amazfit GTS 2 mini left a good impression. An excellent display here side by side with good autonomy for a city device and a bright appearance. The chrome edging is eye-catching, and if you replace the standard bracelet with something more elaborate, you can get a sensible accessory. With all this, his price is quite restrained.

Finally, GTS 2 has incorporated many pluses, such as an extended set of functions, a slightly more advanced shell, a noticeably smoother operation, a slightly larger size, and a representative look. Unsatisfied from the Wishlist remained except that payment via NFC.