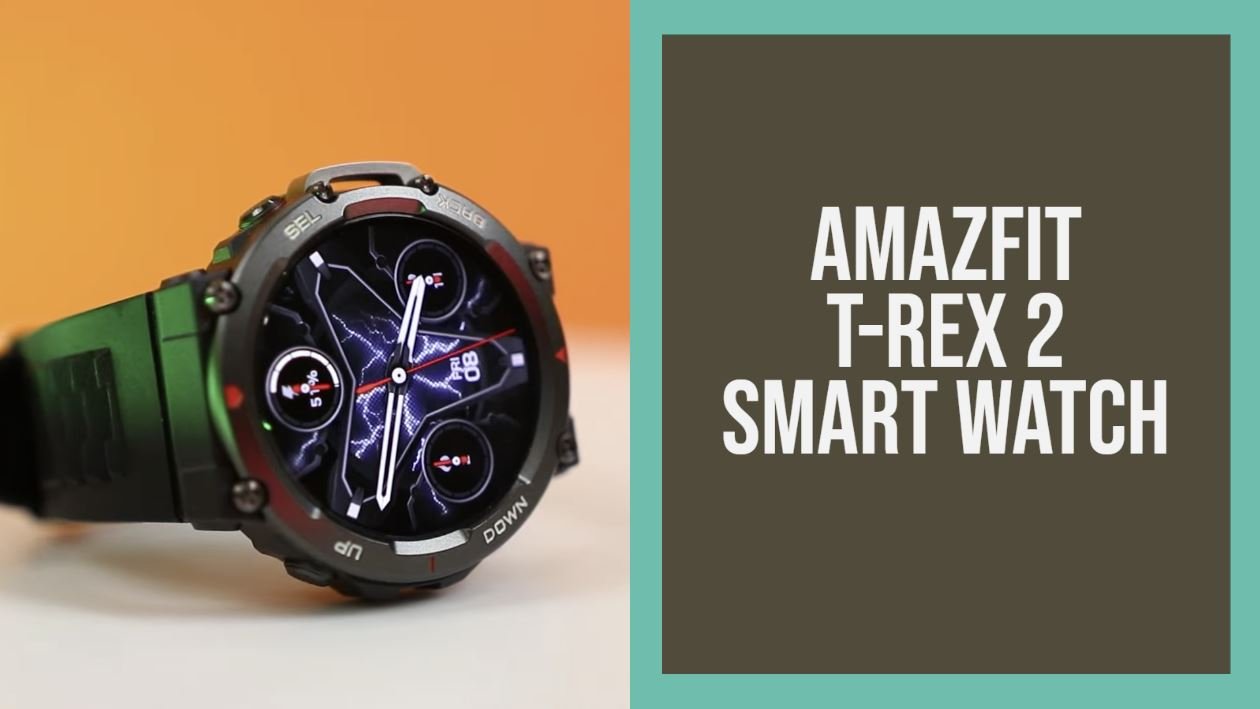 The Amazfit T-Rex 2 was officially unveiled, and it features an AMOLED display, a powerful battery, and multi-band GNSS. With these specifications and a reasonable price, we have one of the most intriguing outdoor sports watches on the market. 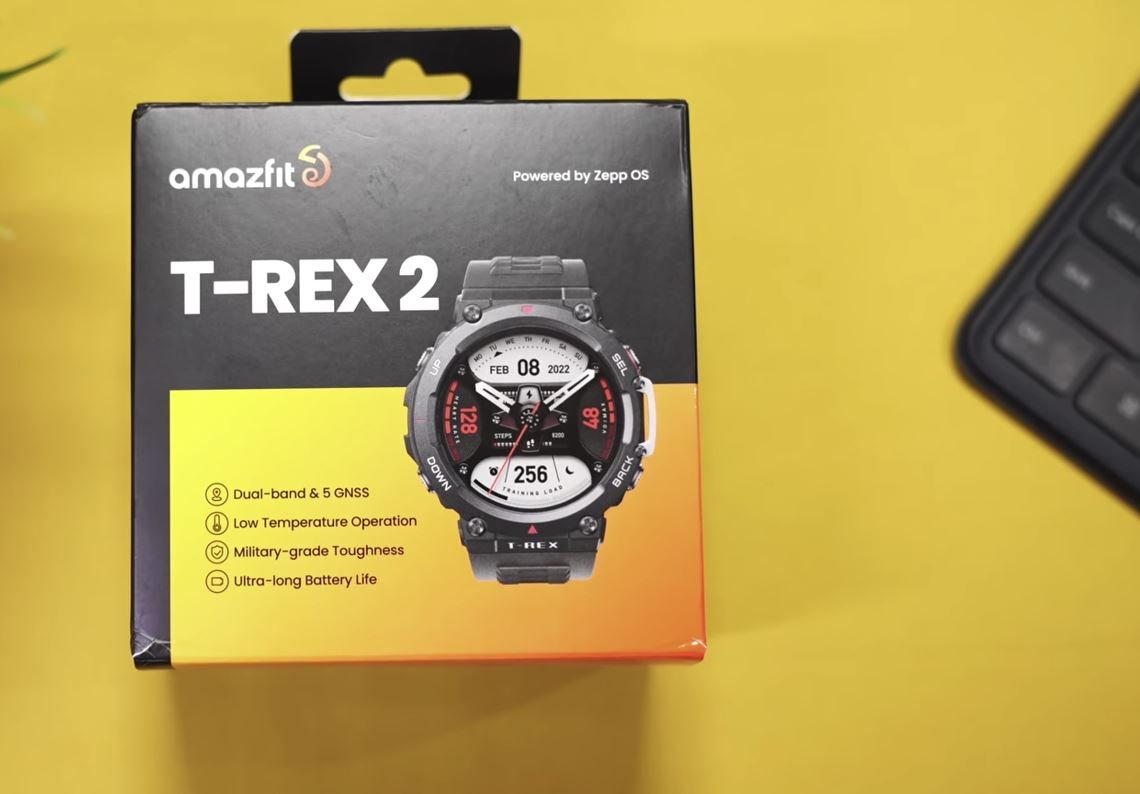 Amazfit is already familiar with multisport and outdoor watches. After all, two intriguing models in this category have already been released: the original T-Rex and the T-Rex Pro. However, it appears that this was insufficient for the manufacturer, as Amazfit attempted to bring an attractive watch to market with the T-Rex 2.

And it appears to have been a success. However, before diving into the new Amazfit T-Rex 2, we compared it to its predecessors.

In the spring of 2020, we met our first T-Rex. After the Pro model was released a little over a year later, the series went into a long period of silence. This time around, the T-Rex 2 has a few major upgrades. 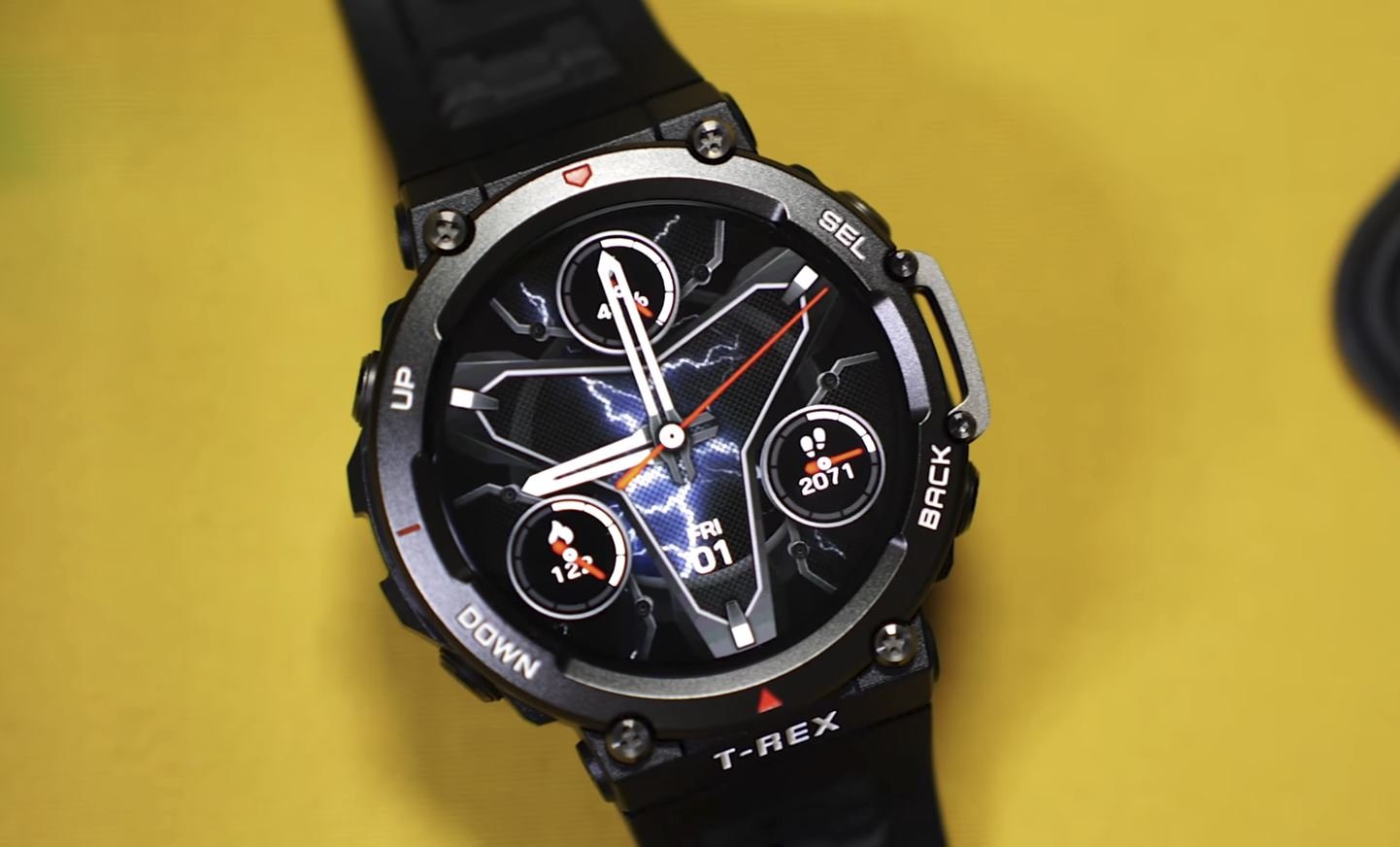 As the comparison clearly shows, the Amazfit T-Rex 2 can offer some interesting innovations.

This makes the T-Rex 2 a true outdoor sports watch that can keep up with other comparable models, but we’ll get into that in a moment.

The T-Rex 2 is no different from other models in this series, relying on its durability and resilience. Due to its water-resistance and other military-standard tests, the case is made of reinforced polymer. 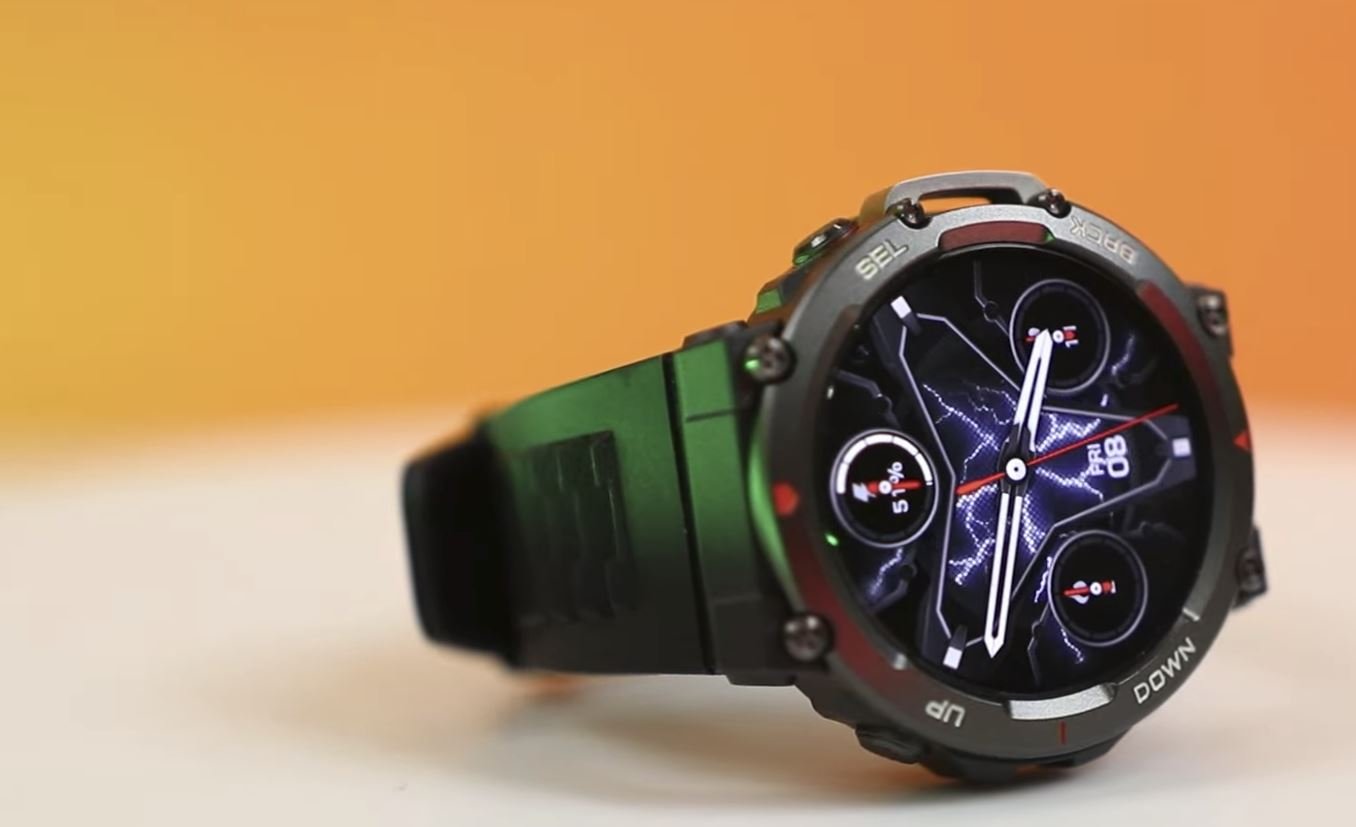 The watch, which has a diameter of 47 mm and a weight of 66 grams, is clearly aimed at men who enjoy a more active lifestyle. 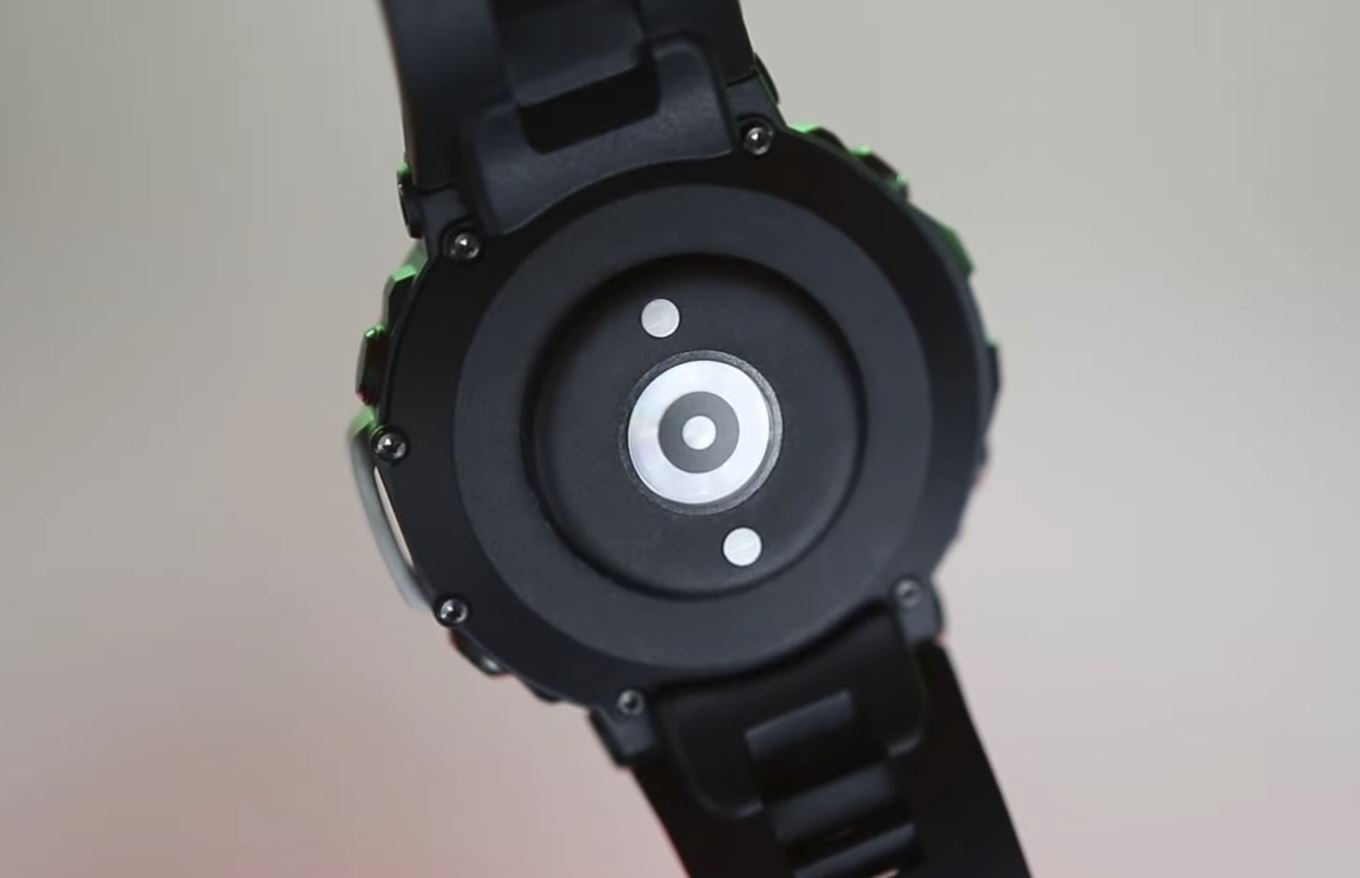 Astro black and gold, black, wild green, and desert khaki are all options for the watch – although the latter isn’t yet available. 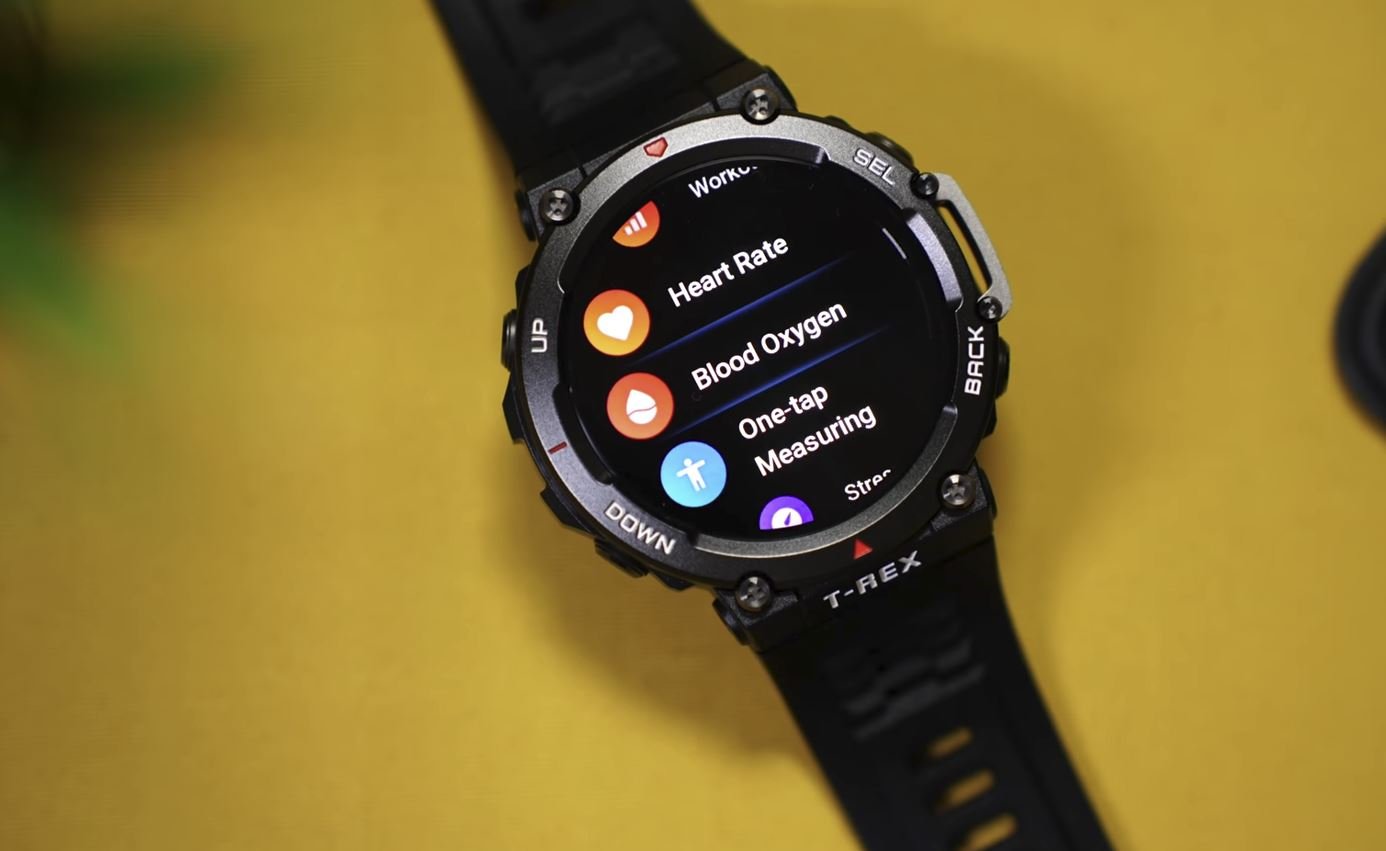 When it comes to the watch’s external appearance, the display is undeniably a highlight and a true eye-catcher. Amazfit has made the best use of the available space by installing a 454-by-454-pixel AMOLED touchscreen in the available space. The four side buttons on the clock can also be used to control the time, which comes in handy when it’s raining or snowing.

As already mentioned, the manufacturer has given the new model a much more powerful battery with an impressive 500 mAh capacity. Amazfit provides precise information about the runtimes.

Even if these are manufacturer specifications, which are usually a bit too optimistic, these are still very decent runtimes, only achieved by a few models in this price category.

And even if the battery should be almost empty, the watch is fully charged again within two hours.

While many other smartwatches come with similar features, Amazfit’s T-Rex 2 has all of them.

In addition to basic calorie consumption and distance tracking, SpO2 and stress tracking are offered as additional options. Breathing rate monitoring is also available as part of comprehensive sleep monitoring.

Additionally, the Amazfit GTR 3 and GTS 3’s 4 in 1 measurement is on board. Heart rate, blood oxygen saturation, respiration rate, and stress (heart rate variability) are just a few of the crucial vital signs monitored for 45 seconds, and the results are displayed immediately.

Perhaps the inspiration for the Health SnapShot feature on the Forerunner 255 and 955 was found here.

The T-Rex 2 uses Amazfit’s well-known PAI system, which records all activities and assigns a point value based on their intensity. The user will be able to see at the end of the day how active he was as a result of this.

The watch has pre-installed sports profiles for up to 160 different types of workouts and training sessions. Some of the most important modes are listed below.

Cycling: Outdoor cycling, spinning, mountain biking, and BMX are all types of cycling.

Outdoor Training: Exercises that can be done outdoors include climbing and hiking as well as other activities like orienteering, rock climbing, fishing, and hunting, as well as skateboarding, rollerblading, parkour, ATV, and dirt biking.

Martial Arts: Taekwondo, Jiu-Jitsu, Kendo, and other forms of martial arts are included in the category of “martial arts.”

Water Sports: Sporting activities in and around the water include everything from sailing and kayaking to dragon boat racing and stand-up paddling to indoor surfing and tubing (added via OTA update).

Winter sports: Sledding and bobsledding are two of the most popular winter activities. Snowmobiles and snowshoes are also popular, as are cross-country skiing and biathlon.

Skipping, archery, equestrian, driving, stair climbing, and triathlon are some of the more unusual activities you can take part in.

The watch automatically detects various forms of exercise, including running, walking, cycling, swimming in a pool, rowing, and using a cross trainer.

Amazfit has also added two new sports features to the T-Rex 2 thanks to their work with the company.

On the one hand, there is a special sports mode for strength training that should automatically recognize dozens of exercises, count repetitions, and record rest periods. After you finish a workout, the Zepp app tells you which muscle groups were worked the hardest and shows you a list of all the exercises you did.

For years, Garmin, for example, has offered a similar feature on various watches, but it was not particularly convincing when it came to recognising an exercise or counting repetitions.

Another novel feature is the web mode for distances greater than 200 and 400 meters, which includes, among other things, automatic curve correction and a virtual pedometer. It remains to be seen how that works in practice and what benefits it brings, but it certainly sounds intriguing.

Finally, the small and compact PeakBeats training analysis, which evaluates your training sessions in detail, should be mentioned. The training load, training effect, ideal recovery times, and Vo2max are all calculated. 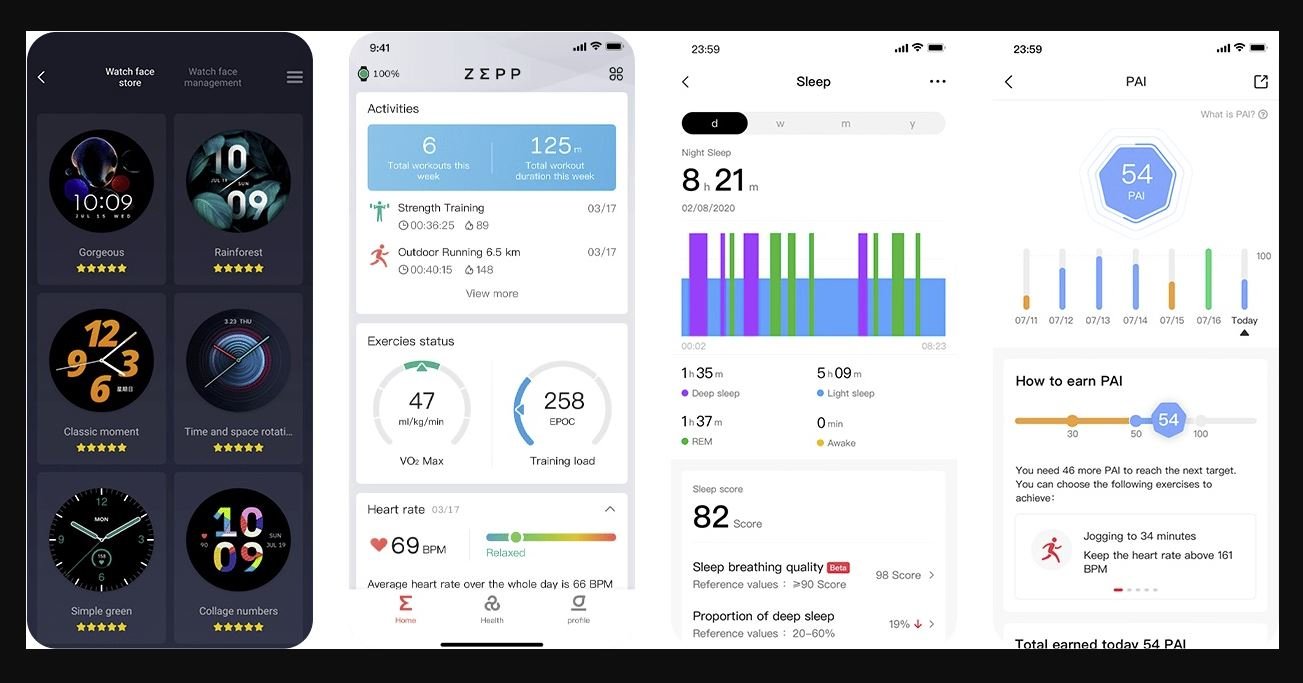 Although the two previous models  Amazfit T-Rex and T-Rex Pro—made the impression of seasoned outdoor watches from the outside, they were actually very robust smartwatches.

The new T-Rex 2 is different. The watch comes with real navigation, route planning, and route import, which is a significant improvement and makes the Rex a real outdoor sports watch.

However, it must be said at this point that it is not yet clear how the entire navigation actually works in practice. The following questions arise in this connection:

You have to find out all this first to be able to say how good the navigation on the Amazfit T-Rex 2 really is.

Nevertheless, I find it very pleasing and interesting that with Amazfit there is now another supplier of outdoor sports watches.

When discussing navigation, we must also briefly mention the new multi-band GNSS in this context.

It is also included in the Xiaomi Watch S1. And, given that Huami, the owner of Amazfit, works closely with Xiaomi, it’s no surprise that the T-Rex 2 now has this feature.

Amazfit provides a nice selection of various smart functions on the watch as well as in the associated app, with unusual but useful features like timer and password protection.

Of course, you will be notified of any incoming messages or phone calls. There is also a weather and calendar app, as well as a plethora of watch faces available for download in the app. Making phone calls is not possible because the watch lacks a built-in speaker or microphone. You’ll also be without a music player. 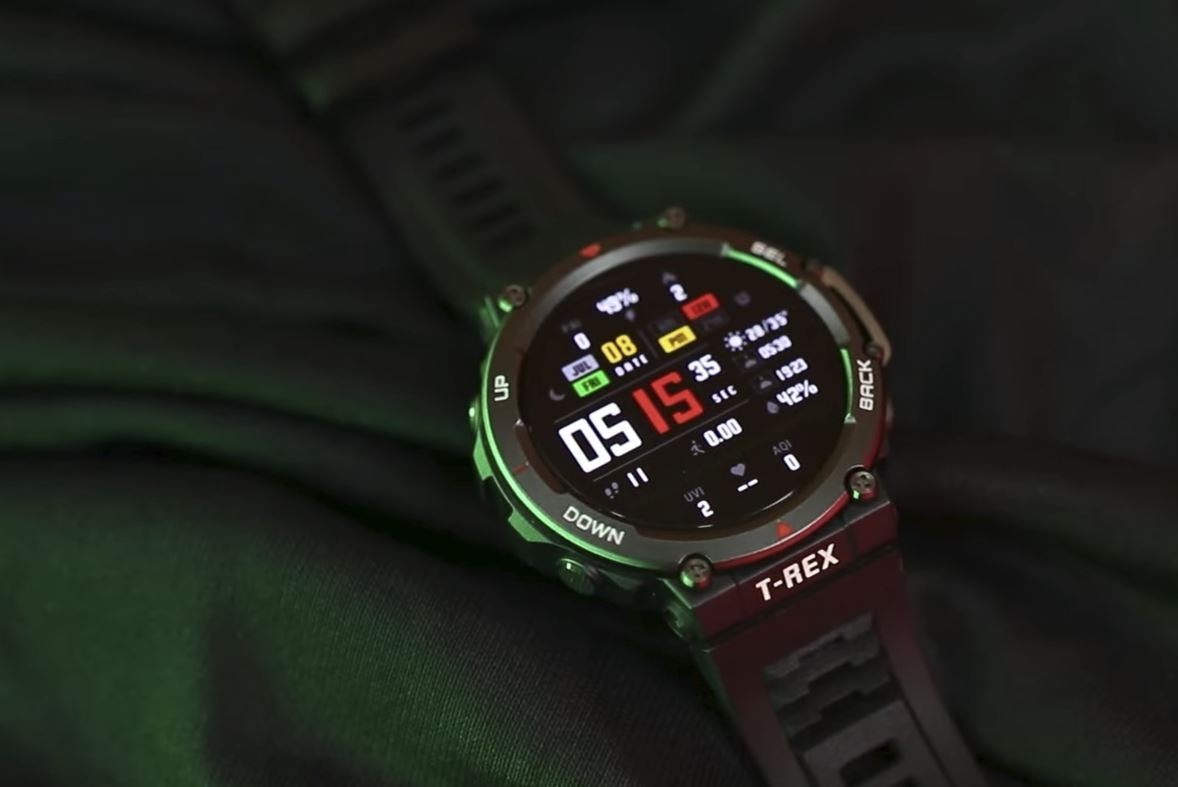 This year’s big surprise could be the Amazfit T-Rex 2. We’re talking about a rock-solid and extremely durable watch with a large AMOLED touchscreen, an enormously powerful battery, and improved distance measurement and navigation. There is also a large selection of sports modes and many interesting sports and fitness features.

And all of this equipment is available for a very reasonable price of around $229. (The watch can already be pre-ordered; delivery is scheduled for mid-June at the earliest.)

Of course, it remains to be seen how the watch performs in everyday use (which makes a test almost imperative). However, based on the specifications, I consider the Amazfit T-Rex 2 to be a compelling alternative to comparable outdoor sports watches like the Garmin Instinct 2 and the Polar Pacer Pro. 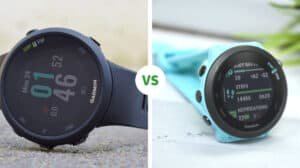 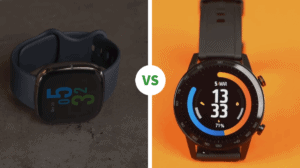 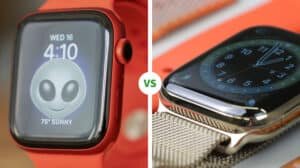 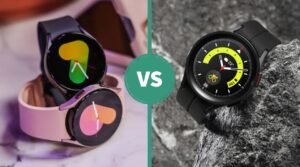 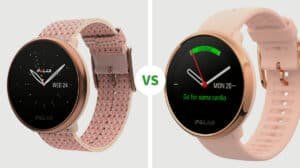