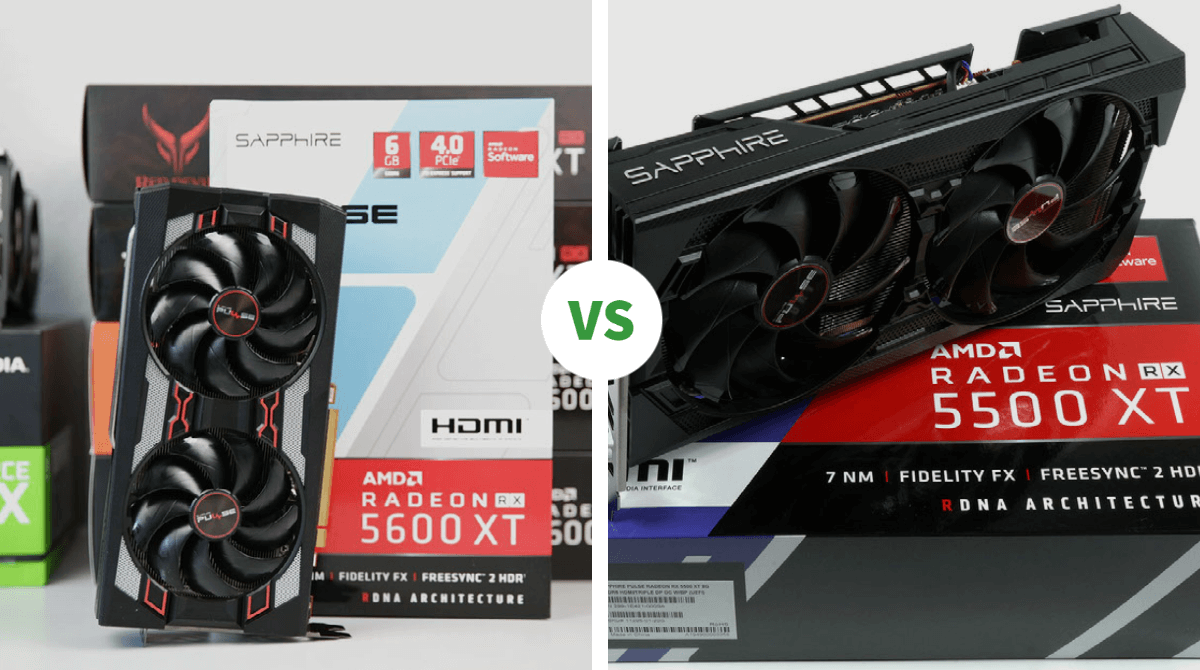 The Radeon RX 5600 XT AMD has placed a graphics card on par with the Nvidia Geforce RTX 2060. Both do not compromise on performance, offer (only) 6 GB, and cost a comparable amount. For AMD to come close to the GeForce RTX 2060, a BIOS update was necessary, even surprising partners.

The Radeon RX 5500 XT, AMD is replacing the Polaris generation on the desktop, currently in the Radeon RX 570, RX 580, and RX 590. Unsurprisingly, the new GeForce GTX 1650 Super is Nvidia’s direct opponent. The navigation graphics card shows a good performance, but the price is clearly too high at the start.

The Radeon RX 5600 XT Pulse is comparatively compact, but the graphics card is not small either. Above all, the model is quite high at 13.5 cm. An eight-pin power plug is still required for operation.
When it comes to the Dual-X cooler, there is no difference between the two models. There is a single large aluminum cooling block, but copper is in direct contact with the Navi-10 GPU. Three heat pipes ensure faster heat transport. Two axial fans with a diameter of 95 mm are responsible for the fresh air, which stop at low GPU temperatures. There is an aluminum backplate on the back.

Those whose Radeon RX 5600 XT Pulse still have the old BIOS versions can download the new and faster versions themselves from Sapphire. In addition to the new BIOS files, the download also includes installation instructions.

Sapphire equips the Radeon RX 5600 XT Pulse with two different BIOS versions. The alternative BIOS is also based on AMD’s specifications in the final version. The game clock is specified with 1,460 MHz, the boost clock with up to 1,620 MHz. The GPU can allow itself a maximum of 135 watts, which is, however, a value that the graphics card with the alternative BIOS simply cannot achieve.

The primary, factory-active BIOS deviates from this and thus also from AMD’s reference specifications. Sapphire makes intensive use of the BIOS restrictions that AMD relaxed shortly before the launch. For the primary BIOS of the Radeon RX 5600 XT Pulse, a game clock of 1,615 MHz and a maximum boost of 1,750 MHz apply, which is a huge plus of 240 MHz and 190 MHz, respectively, compared to the reference. In addition, the memory is “overclocked” from 6,000 MHz to 7,000 MHz. And the GPU can allow itself up to 160 watts. So there is a pretty big difference in performance between the two BIOS versions.

Apart from that, the Radeon RX 5600 XT Pulse is a fairly simple graphics card. There are no special features, and the RGB lighting with the Sapphire lettering is simple. It can control the monitor from three DisplayPort 1.4 outputs with DSC compression or an HDMI 2.0b connection.

The Radeon RX 5500 XT Pulse is based on its bigger brother, the Radeon RX 5700 Pulse; only everything is one size smaller. The dual-slot cooler is shorter at 23 cm and not quite as high at 12 cm. Towards the end of the card, it clearly protrudes above the PCB because the PCB with the seven voltage converter circuits measures only 18 cm.

The graphics card does not rely on several small heat sinks; instead, there is only one large one. This consists exclusively of aluminum; only above the GPU is there an embedded copper block. Three heat pipes should improve the heat transport; the same applies to the attached backplate. Two axial fans with a diameter of 95 mm are responsible for the fresh air. These switch off at low temperatures. 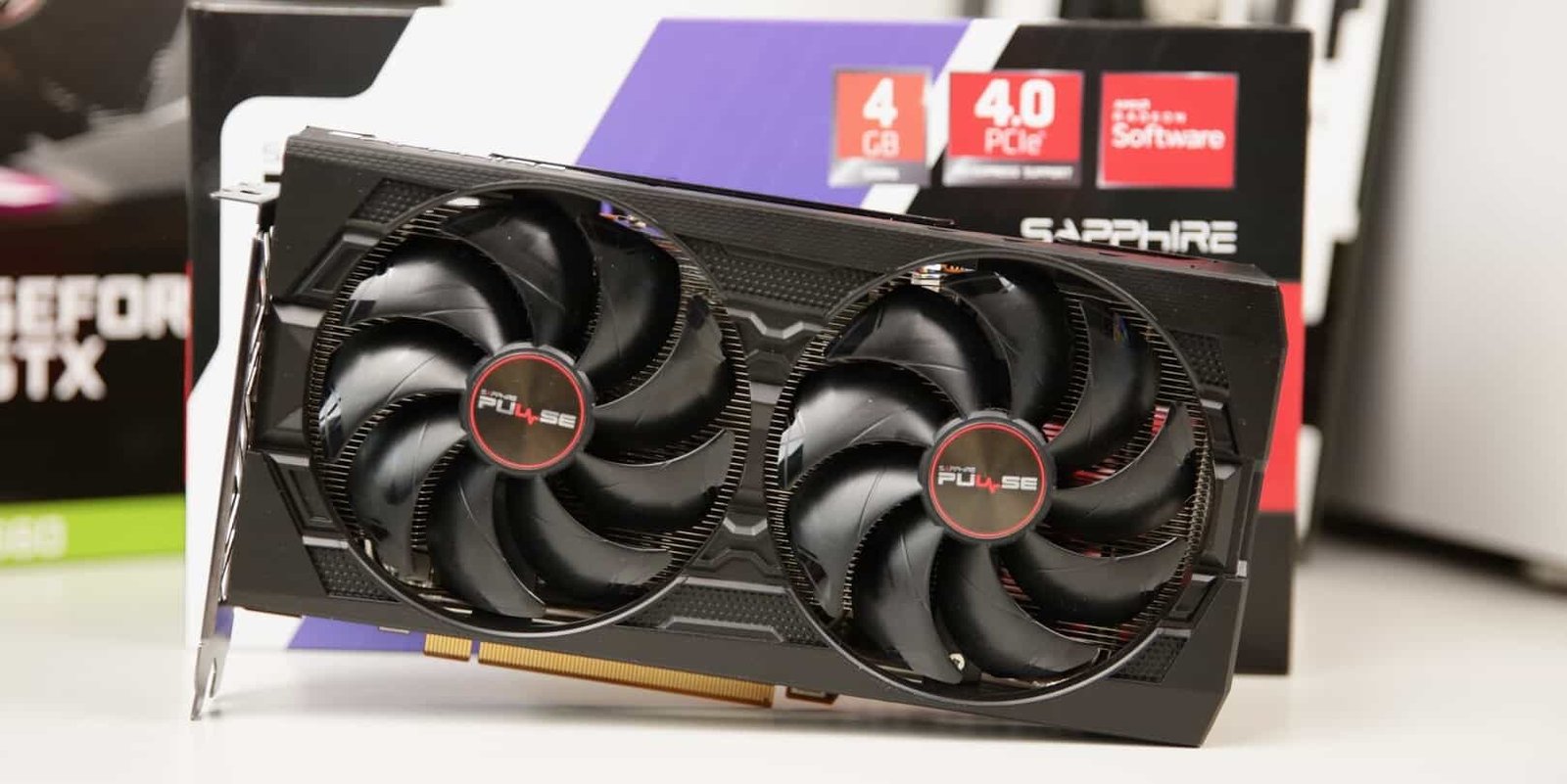 Sapphire names the clock rates of AMD’s reference specifications for the Radeon RX 5500 XT Pulse with 1,607 MHz, 1,717 MHz, and 1,845 MHz. Unfortunately, the manufacturer does not provide any information on GPU power, but the Afterburner shows around 100 watts. The entire graphics card can accept 135 watts, which is 5 watts more than the reference specification. This means that the model is minimally overclocked. The 4 GB GDDR6 memory clocks at 7,000 MHz. Those who prefer 8 GB of memory, but are generally interested in the Pulse, can rest assured that the same model will also be available with the aforementioned amount of memory.

The Sapphire Radeon RX 5600 XT Pulse can hardly be overclocked. This is not due to the hardware as such; rather, AMD set a few limits in the end. The GPU can only be overclocked by 40 MHz and the memory by 440 MHz before the driver limits. Without the faster BIOS, there would have been more leeway with the BIOS; however, the potential increase in performance has largely been used up at the factory. After all: the Radeon RX 5600 XT Pulse easily copes with the small margin.

The speed increases by a further 4 to 6 percent, depending on the game. That is an astonishing amount for the minority of the changes.

The Radeon RX 5500 XT only has limited overclocking potential. Both graphics cards ran stably up to a clock frequency of around 1,910 MHz, values ​​above that led to crashes. That is about 50 to 100 MHz more than in the original state. Even then, the higher power limit of the Radeon RX 5500 XT Red Dragon is not needed. The voltage of the GPU cannot be increased further on either model.

The driver allows a maximum clock speed increase of 440 MHz in terms of memory, which both graphics cards can handle without any problems. The built-in GDDR6 memory has no problems with 7,440 MHz. In games, about 5 percent more performance could be squeezed out of the Radeon RX 5500 XT.

AMD’s Navi-10 GPU is frugal on the Windows desktop, and that also applies to the Sapphire Radeon RX 5600 XT Pulse. More than 7 watts are not required for the desktop. When playing a UHD video with 60 FPS on YouTube, on the other hand, the hunger for energy increases significantly. However, with 28 watts, the graphics card still needs a little less than the Radeon RX 5700 and Radeon RX 5700 XT, but ultimately still a good deal more than the competing products from Nvidia.

The Radeon RX 5500 XT is frugal on the Windows desktop. The Sapphire Radeon RX 5500 XT Pulse has a good, if not spectacular, 9 watts; the PowerColor Radeon RX 5500 XT is even satisfied with a perfect 7 watts. The comparably fast Radeon RX 590 still required 20 watts in the same scenario. While playing a UHD video on YouTube, the graphics cards generate 23 or 25 watts, which is better than the Polaris predecessor and comparable to the Turing competition. The measurement also shows that the PowerColor graphics card requires less energy than the Sapphire accelerator when there is no or low load.

The specifications relaxed by AMD make the graphics card faster without power consumption and volume getting out of hand. However, if you want to own such a Radeon RX 5600 XT shortly, you have to use the BIOS update tool manually because the models that will be available in stores now still rely on BIOS versions that allow less clock speed. That shouldn’t have happened to AMD.

The Radeon RX 5500 XT AMD has finally replaced the old middle class of the Polaris generation and successfully brought the modern RDNA architecture into the new entry-level class. This works so far in the benchmarks because the Radeon RX 5500 XT delivers on average Radeon RX 590 and is therefore ahead of the Radeon RX 580. Nonetheless, this time, too, the trend observed last: there is no leap in performance. If you want more performance, you have to go one class higher – at a higher price.

Nvidia probably knew pretty well in advance where the Radeon RX 5500 XT would land. AMD had the chance to pull by with a fully activated Navi-14 GPU but didn’t use it. The reason for this is not known. The Radeon RX 5500 XT crosses the finish line by just a blink of an eye on the editorial team.