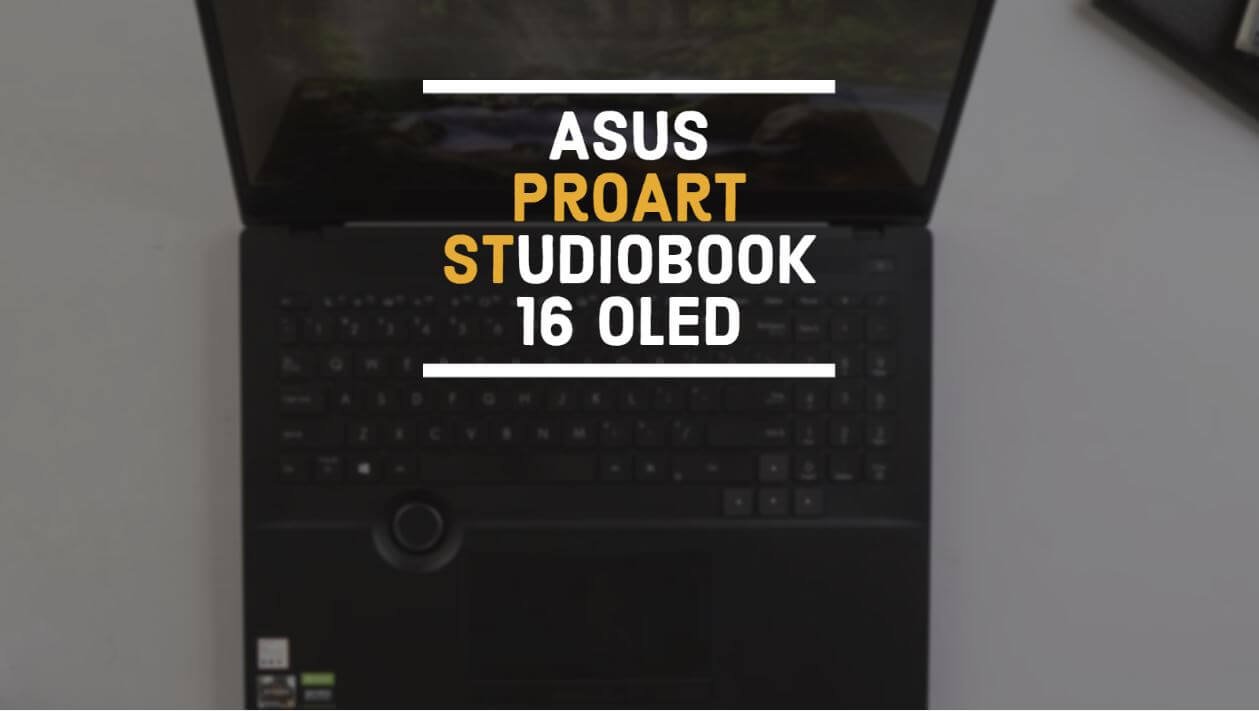 ASUS has been offering monitors and other accessories for professional Youtube, photographers, etc., with its ProArt series for a long time.

The StudioBook 16, characterized above all by its display, is now very fresh! ASUS relies on an OLED panel here! OLED panels are prevalent in smartphones and televisions, but they are a rarity in notebooks.

The ProArt StudioBook 16 OLED should also convince apart from the 16-inch OLED panel! This also brings a unique rotary knob that should facilitate video editing and photo editing. A new SD Express card reader, fingerprint scanner and lots of performance are also on board!

At first glance, the StudioBook 16 OLED reminds a bit of the ASUS ROG Zephyrus G15. The cases of the notebooks are, of course, not identical, but ASUS relies on a similar design and material. But this is not a bad thing.

ASUS ProArt line of notebooks is designed for professionals involved in creativity. The ProArt Studiobook models seem to form a separate niche in the market. It is difficult to compare them with competitors.

The configuration is based on the AMD platform with a powerful top-end Ryzen 9 5900HX processor (8 cores, 16 threads), installed mobile video card GeForce RTX 3070. Supports the NVIDIA Studio platform requirements with the possibility of hardware acceleration of professional applications, including functions based on AI and ray tracing. The laptop is 32 GB of RAM; the storage system uses two NVMe drives in RAID 0 mode. 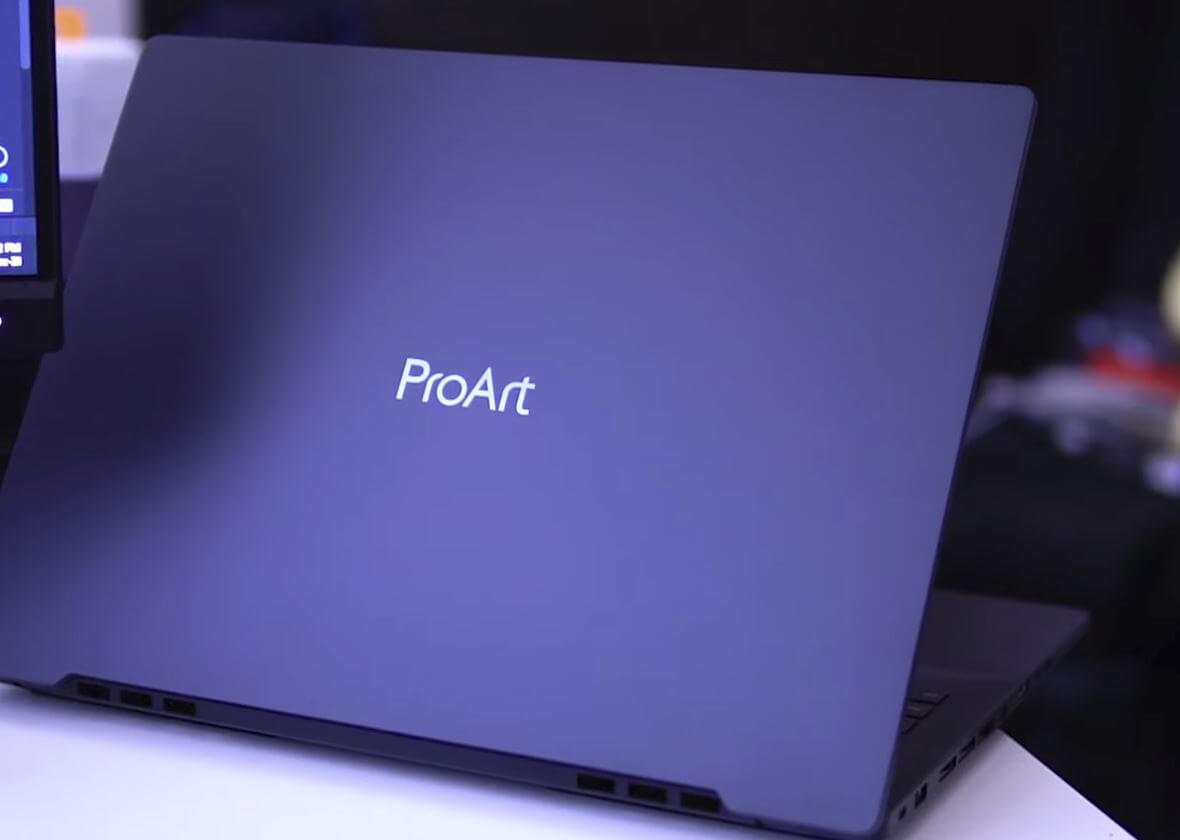 The ASUS ProArt Studio book 16 OLED has a simple matte black casing with only the ProArt logo on the back. The bezels around the screen are noticeable but not very large when the laptop itself can be called compact. It measures 36.2 x 26.4 x 1.99 cm and weighs 2.4 kg, which is not much considering the protection of the military standard MIL-STD 810H. 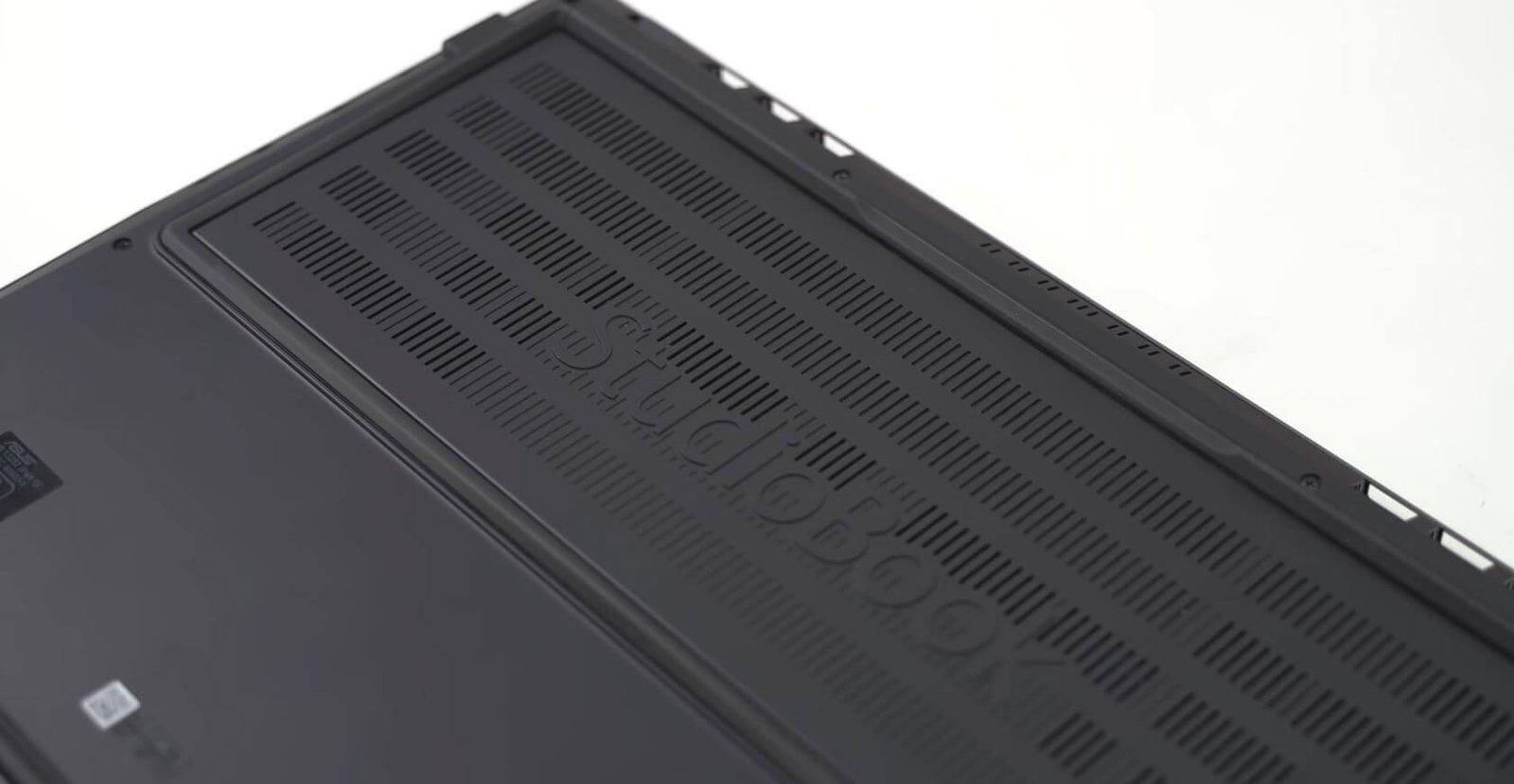 We have a plastic notebook in front of us, but the lid is covered with aluminium, for example.

Since we have a 16 inch 16:10 display, the StudioBook 16 OLED looks a bit larger than most 15-inch devices. The notebook is more like a 17-inch model. This also fits the weight, which is slightly higher at 2.4KG. The thickness again seems acceptable at 21.4mm.

The ASUS ProArt StudioBook 16 OLED would not be my first choice to take with me to school or university every day! However, it is quite portable enough to take with you to a shoot. 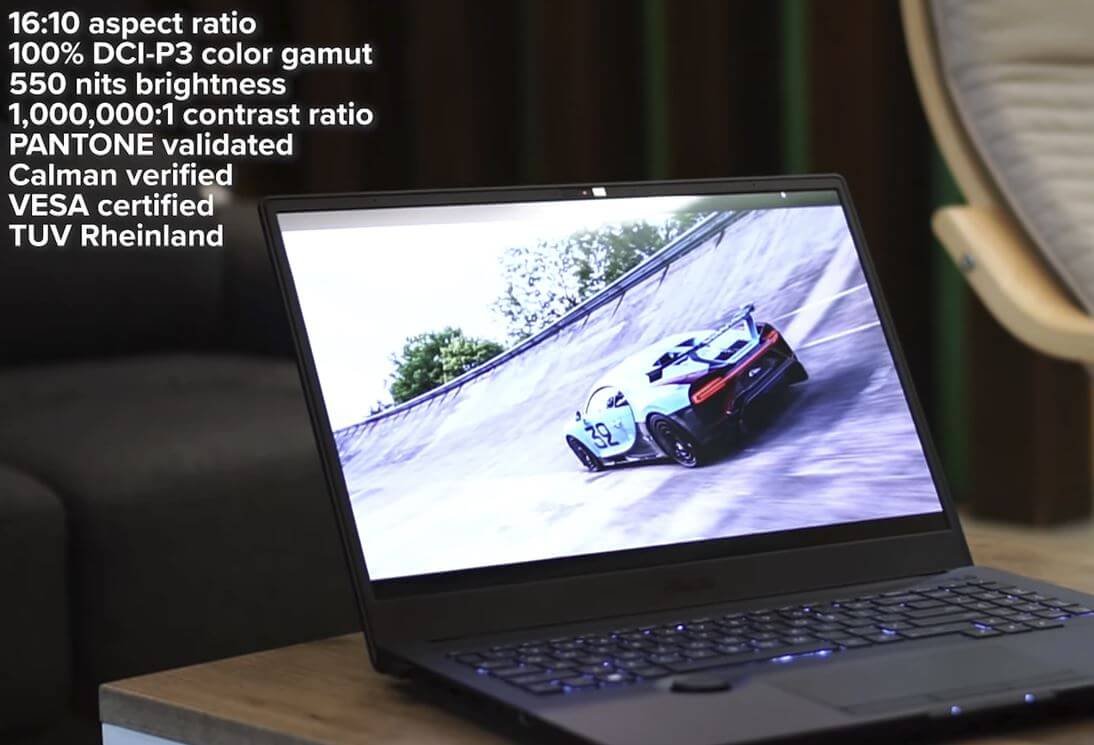 The image is vibrant and detailed; this is one of the best laptop screens recently. The certificates of Calman and Pantone indicate the high accuracy of the shades – the deltaE value is less than 2. The color depth is 10 bits, and the coverage of the DCI-P3 space is 100%.

These characteristics allow you to work with photos and videos in programs like DaVinci Resolve and Adobe Lightroom Classic professionally. A contrast ratio of 1,000,000: 1 means blacks are intense. This is ideal not only for creating content but also for viewing it.

The brightness reaches 550 nits in HDR mode, so the laptop complies with the VESA DisplayHDR 500 True Black standard. True, up to 1600 nits, like the latest Apple MacBook Pros, is far from it, because they use mini-LED displays. However, for professional work, the true blacks of OLED are preferred over the huge brightness of the mini-LED.

With all the praise, a “high end” IPS panel like in the Dell XPS models comes very close to the StudioBook 16 OLED! At least subjectively.

The ASUS ProArt Studiobook 16 OLED internals are not the most powerful professional notebooks out there.

The performance is sufficient for professional work with any content. Nvidia RTX 3070 is used as a discrete video card instead of RTX 3080. However, the latter would not speed up work in professional programs in any way. But the heating and the price of the laptop became higher.

There are no questions about the rest of the internal components either because here, the best mobile processor from AMD is the eight-core Ryzen 5900HX. RAM is 32 GB, and internal storage reaches 2 TB. The laptop runs Windows 10 Pro, although an upgrade to Windows 11 is due early next year.

Excellent performance, although it does not match the MacBook Pro on the M1 Max (821 points), although the Apple laptop is far ahead of all competitors in terms of performance. The Studiobook 16 performs well in games, although not intended for them. It is better not to set the maximum settings, but the frame rate is high. Of course, the 4K display is a limitation; the refresh rate does not exceed 60 Hz. 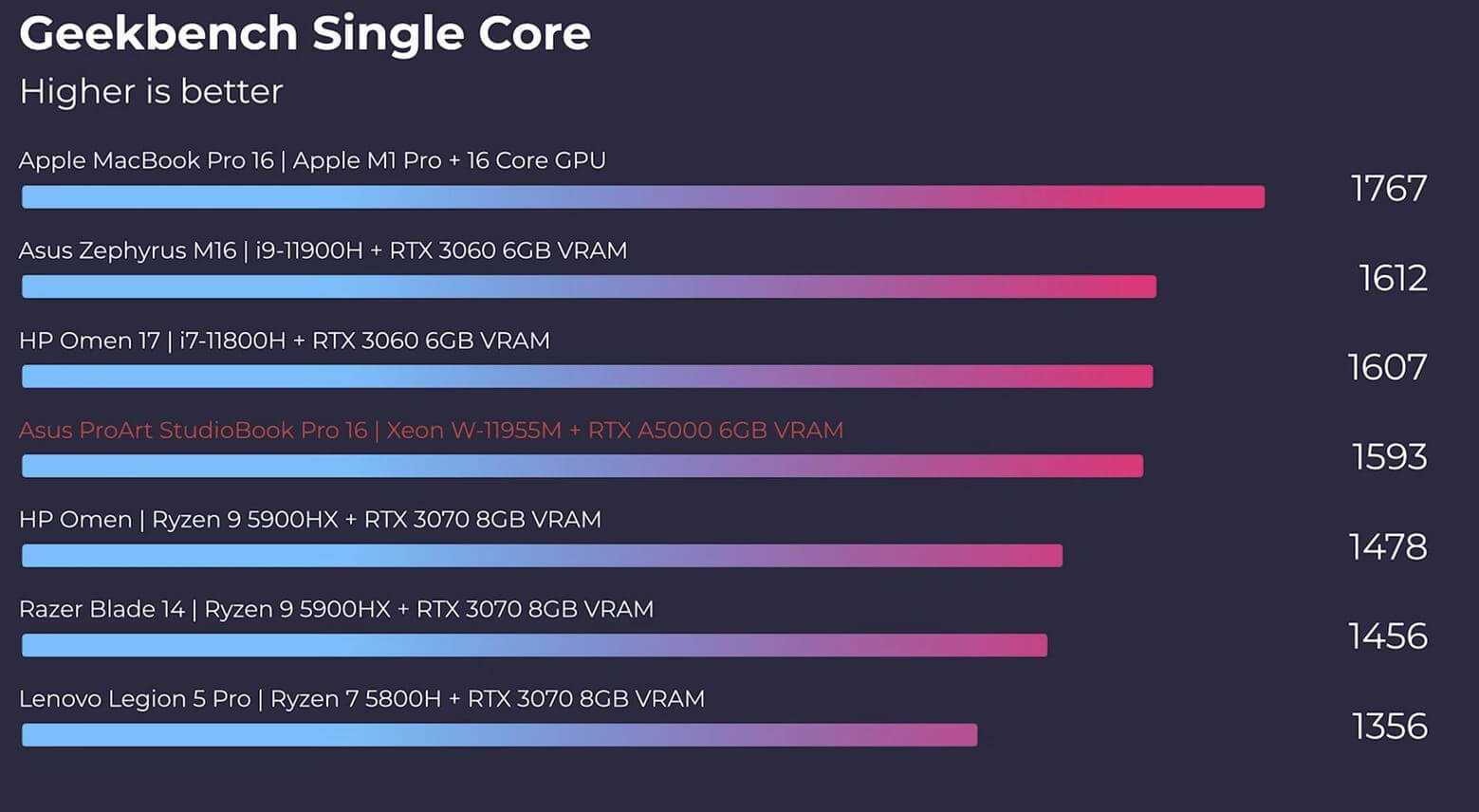 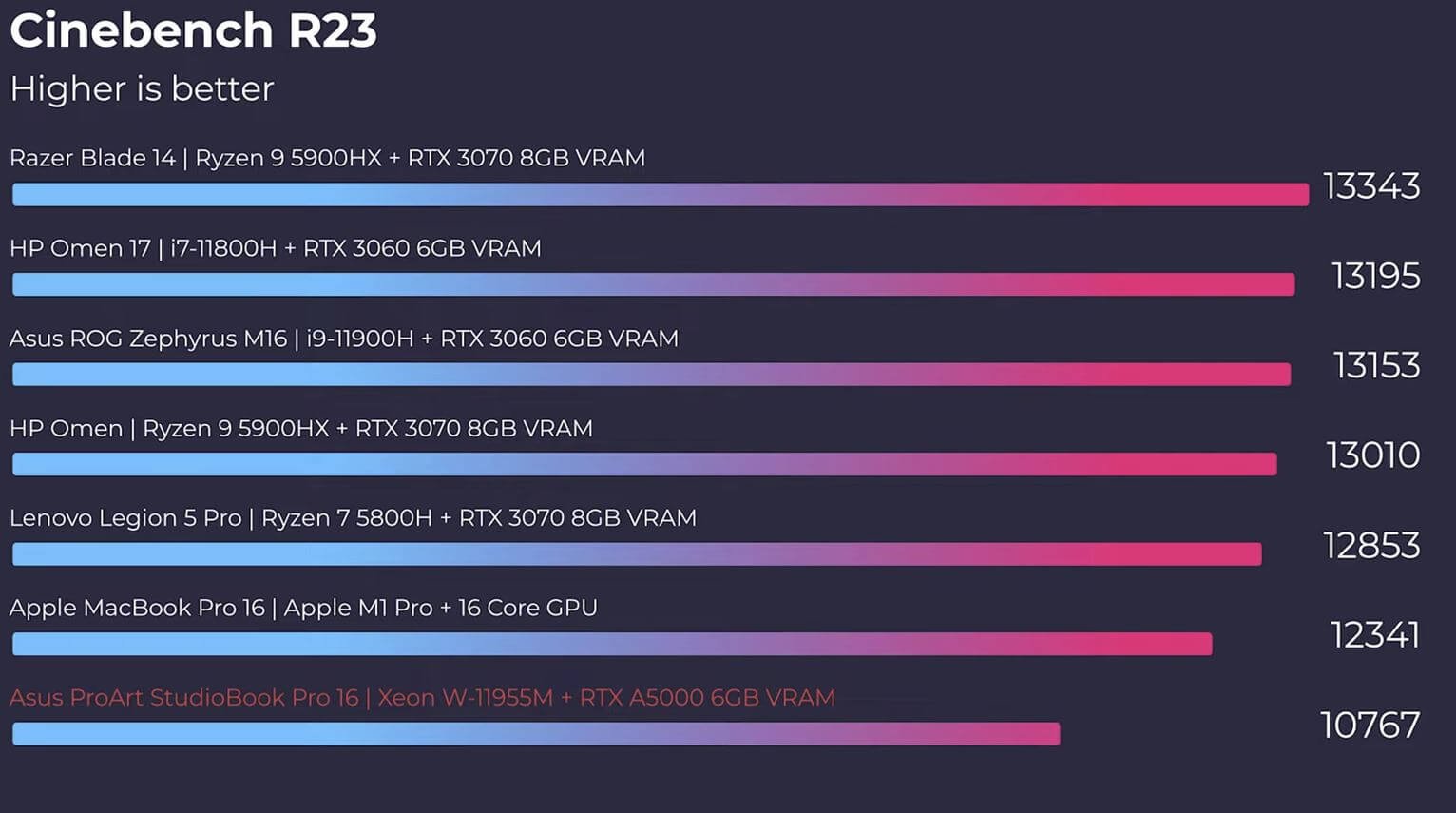 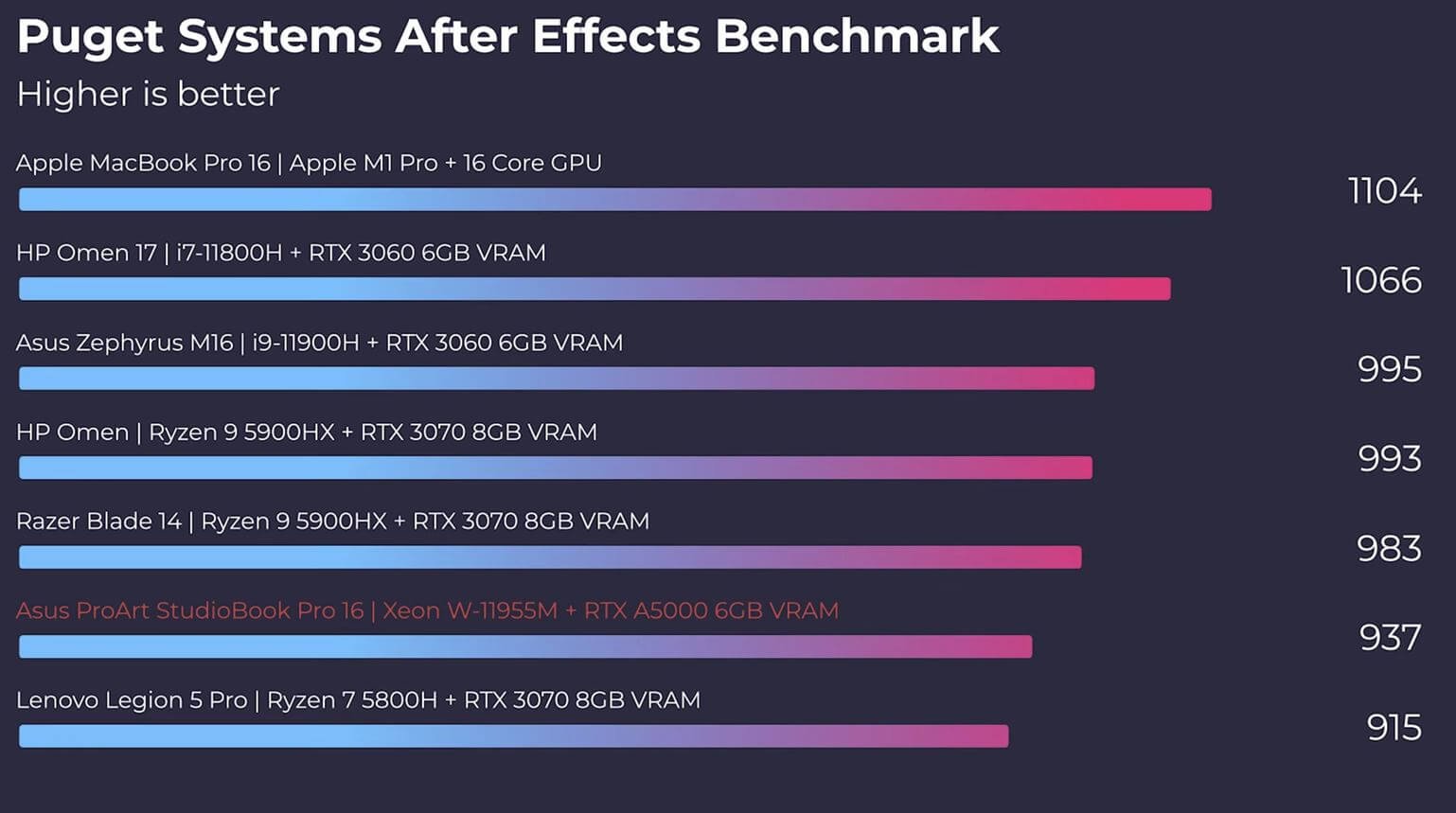 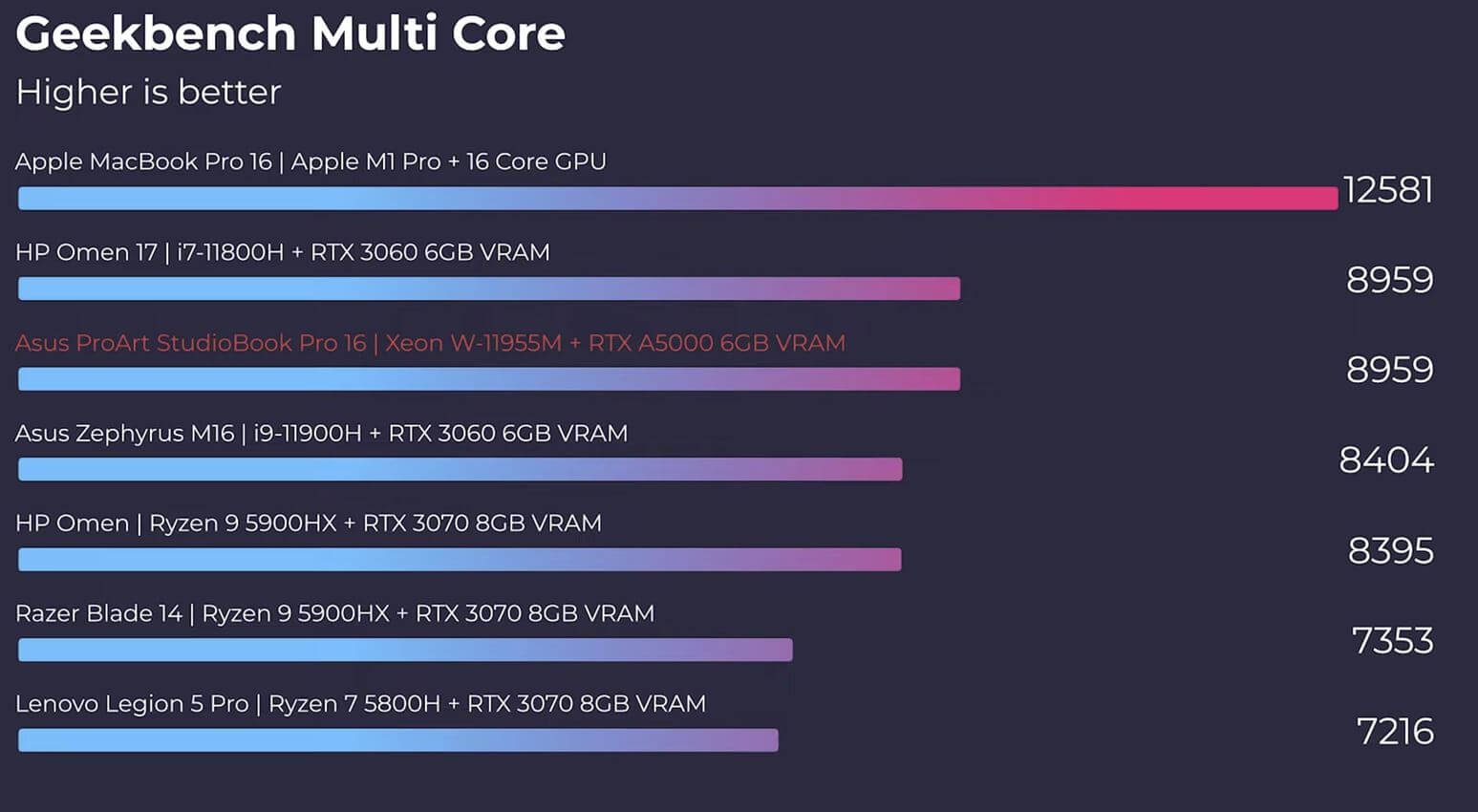 ASUS has developed its own IceCool Pro cooling system, also used in the ProArt Studiobook 16 OLED. 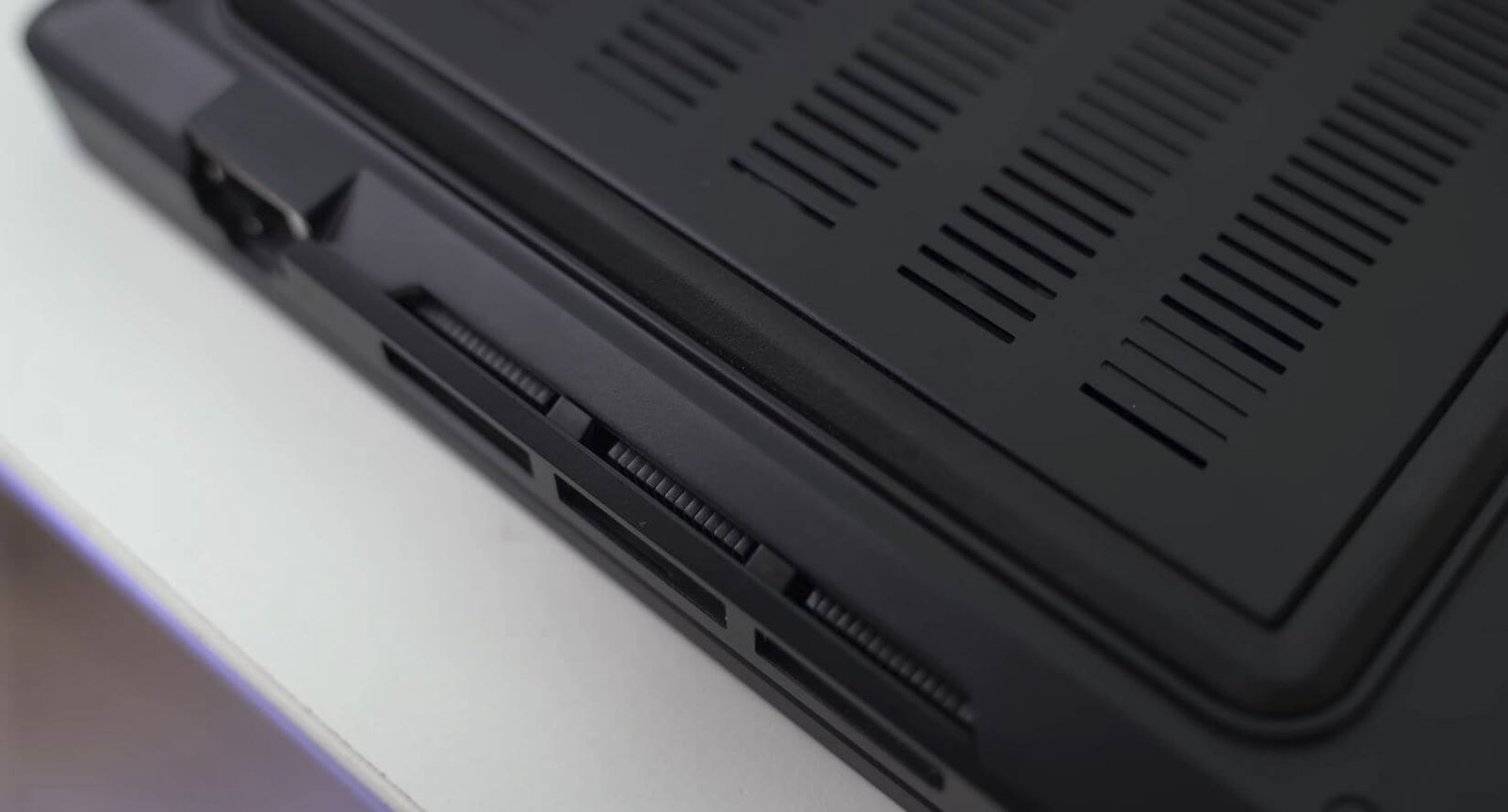 The airflow increases by 16%, and the noise does not exceed 40 dB in standard mode. This is made possible by seven smart sensors, six heat pipes, and two fans with 102 blades.

A high-speed mode is also available, in which the thermal package of the processor and video card is increased to the maximum, and throttling does not occur. The fan noise becomes more noticeable. But this is a convenient mode for leaving rendering and doing other things. 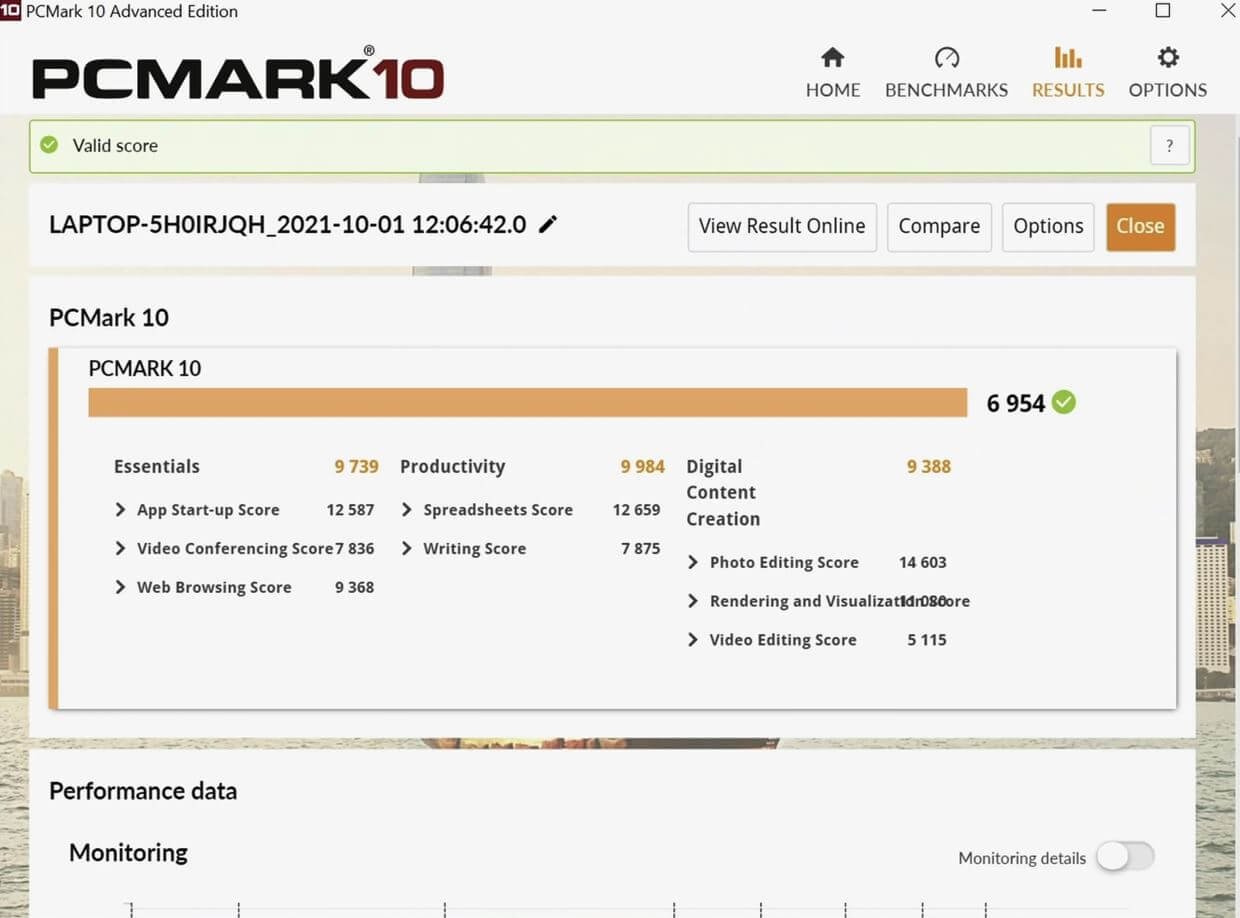 There are plenty of ports and connectors on the ASUS ProArt Studiobook 16 OLED for connection.

With that, the port equipment is pretty much perfect! You couldn’t ask for more in a current notebook.

There are only two speakers here, not four, as on some other modern laptops. However, the Harman / Kardon drivers are tuned, so their sound is excellent: the bass is deep, and the mids are distinct. Other features include a fingerprint scanner on the power button and an HD webcam. The camera has a privacy shutter and face recognition for unlocking via Windows Hello.

The controller’s right in the ProArt Studiobook 16 OLED is a large touchpad with three buttons.The third is for 3D designers because it allows models to be rotated and other operations more efficient. The touchpad also supports MPP 1.51 styluses, making it suitable for drawing and handwriting.The ASUS ProArt Studiobook 16 keyboard has a long travel and good feedback. On the right is a set of numeric keys. The keyboard is too high on the opposite side because the ASUS Dial controller takes up a lot of space above the touchpad. The buttons are small, but you can get used to it. 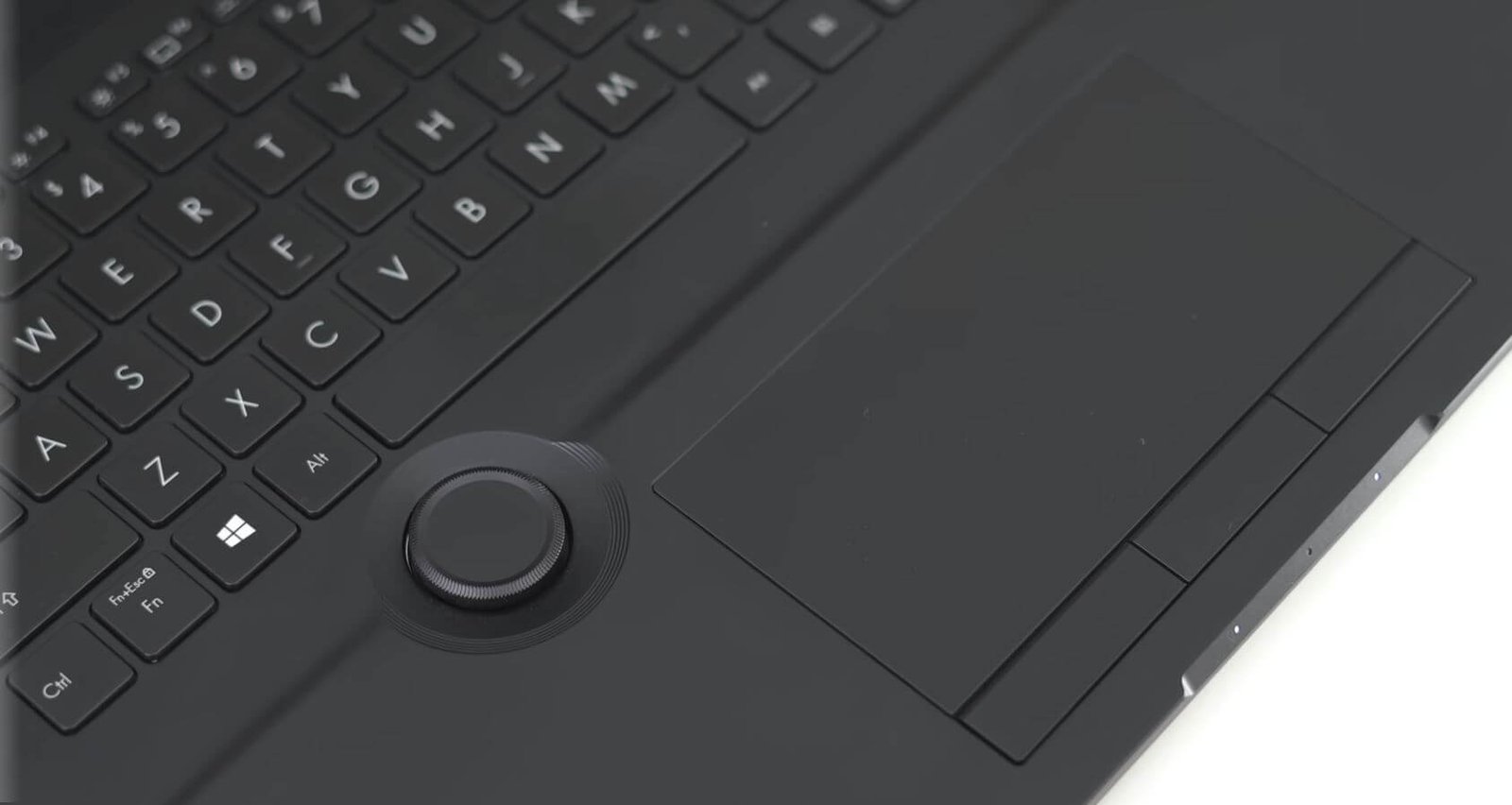 A unique feature of ASUS ProArt Studiobook 16 OLED is the innovative ASUS Dial controller. Usually, such elements complicate the work with the laptop and take up unnecessary space. But, this versatile controller turns out to be useful. ASUS Dial is round in shape with a pleasantly textured coating located under the keyboard on the left. 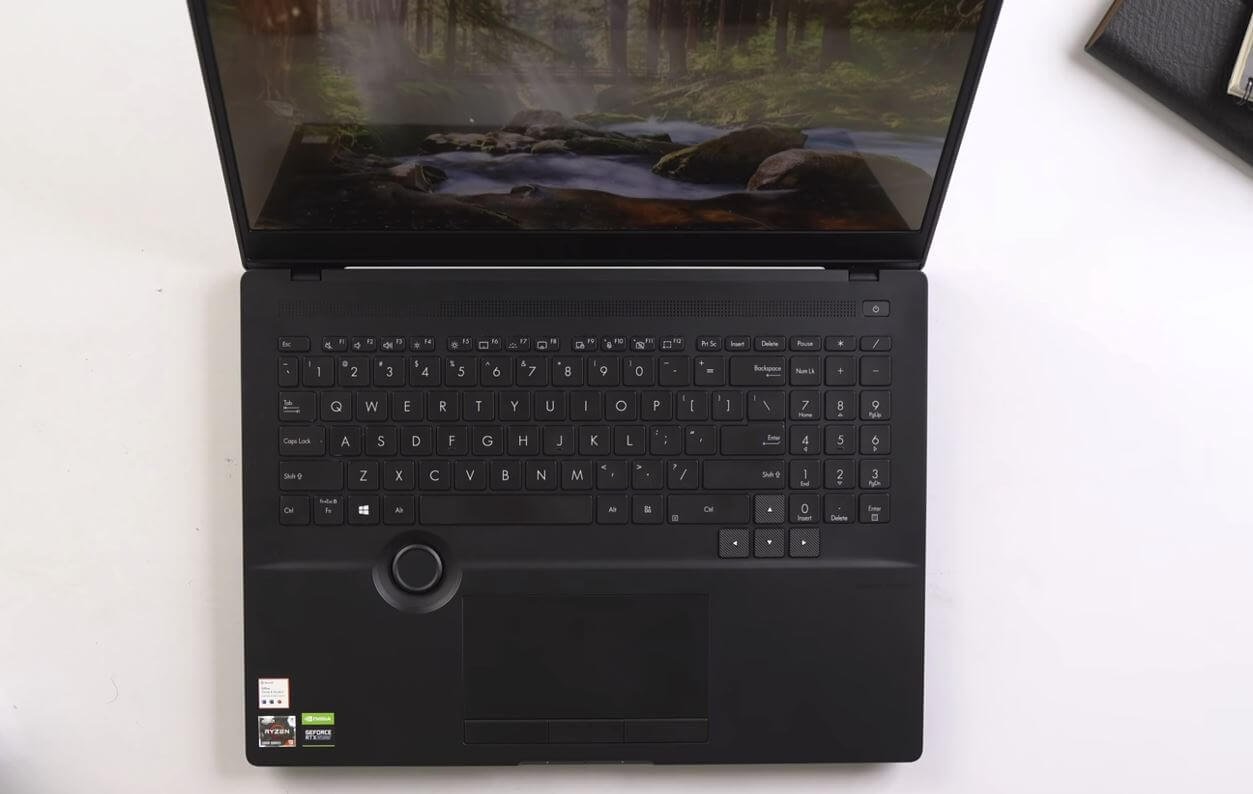 During normal operation, scrolling the controller will change the volume or brightness of the screen. This is more convenient than the function keys. However, Dial becomes useful while working in Adobe Creative Cloud applications.

In Photoshop, clicking on a controller opens a menu with quick access to several commonly used tools and functions. Switching between them is carried out by turning the controller. Pressing it again opens the parameter editing window. This allows you to quickly change the brush size, image scale, contrast, and other settings. There are similar menus in Premiere and After Effects.

A 90 Wh battery is built into the StudioBook 16 OLED. The battery life in practice fluctuates highly due to the OLED display!

An OLED display uses more energy when displaying a white screen and less when you display a black one. Accordingly, ASUS also uses a black Windows theme by default.

The battery life fluctuated between 5 and 8 hours in everyday life, depending on the display brightness, etc.

The ASUS ProArt StudioBook 16 OLED does a lot right and is a great notebook, but it’s not for everyone! Stunning 4K OLED screen with flawless hue accuracy. Powerful hardware enables fast image and video editing applications. And the easy-to-use ASUS Dial controller boosts your productivity.