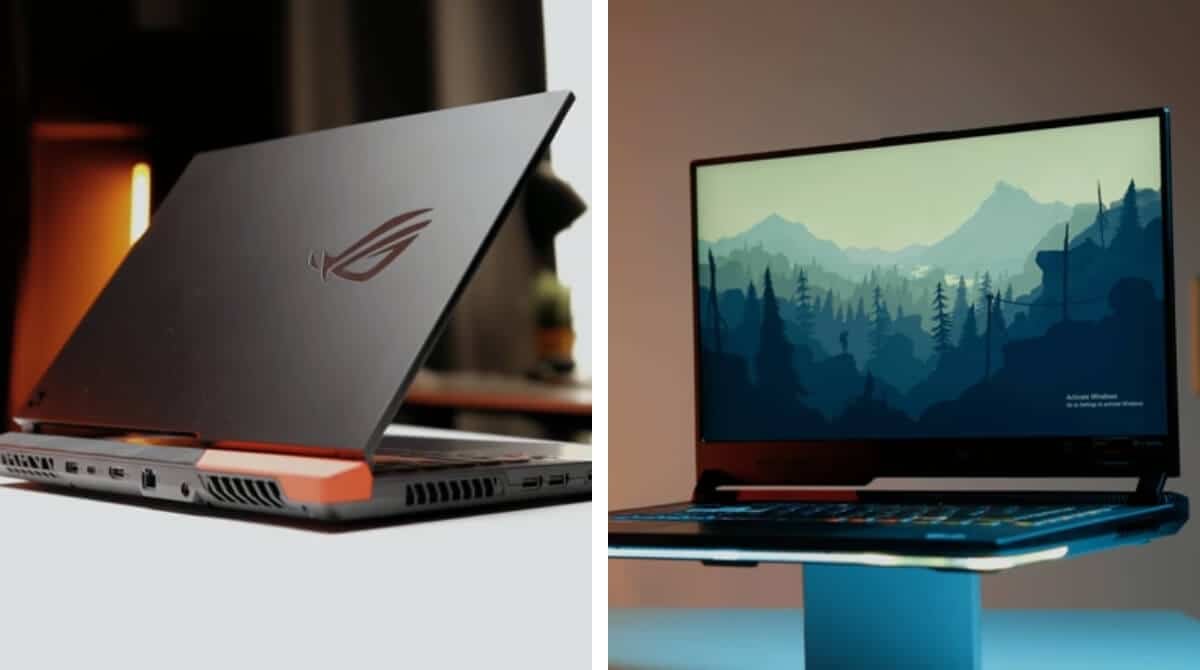 For several years, it has been impossible to design a high-performance laptop without having recourse to the couple Intel for the processor and Nvidia for the graphics card.

But today, the situation has changed. AMD has indeed returned to titillate Intel on the processor market and even offered itself the luxury of taking advantage of its latest Ryzen H series.

This end of spring 2021 marks a new stage with the arrival of the latest AMD 6000 series graphics cards. And as often, it is Asus, already at the origin of great successes in recent months, which draws the first with its ROG Strix Advantage Edition G15 G513.

The screen closed, regulars of the brand will not be disoriented. The Strix Advantage Edition takes the design of other Asus gaming laptops, namely a black color with a clean-cut based on “small dots” (only for aesthetic purposes here, they are not hollow, we can also see the ROG inscription according to the tilt angle). 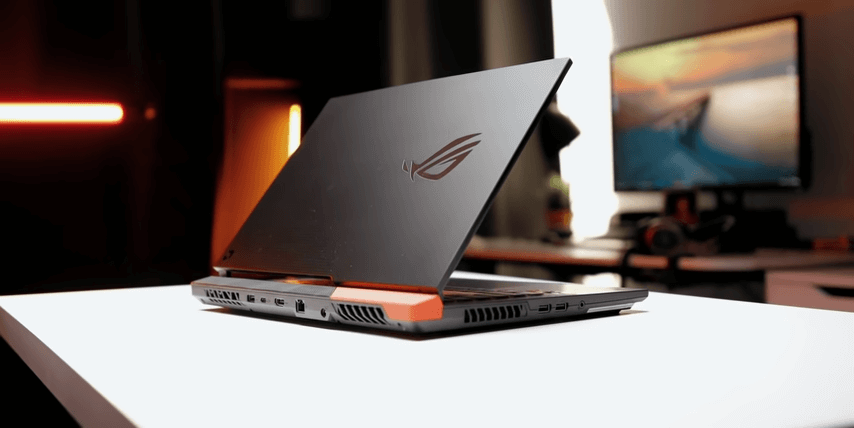 Despite the emphasis on plastic, the entire chassis is well made and inspires confidence. The rigidity does not call for reproach. The Asus ROG G513QY will therefore be able to blend into most environments. Ultimately, our only complaint would be its sensitivity to fingerprints. And this, from the first start. 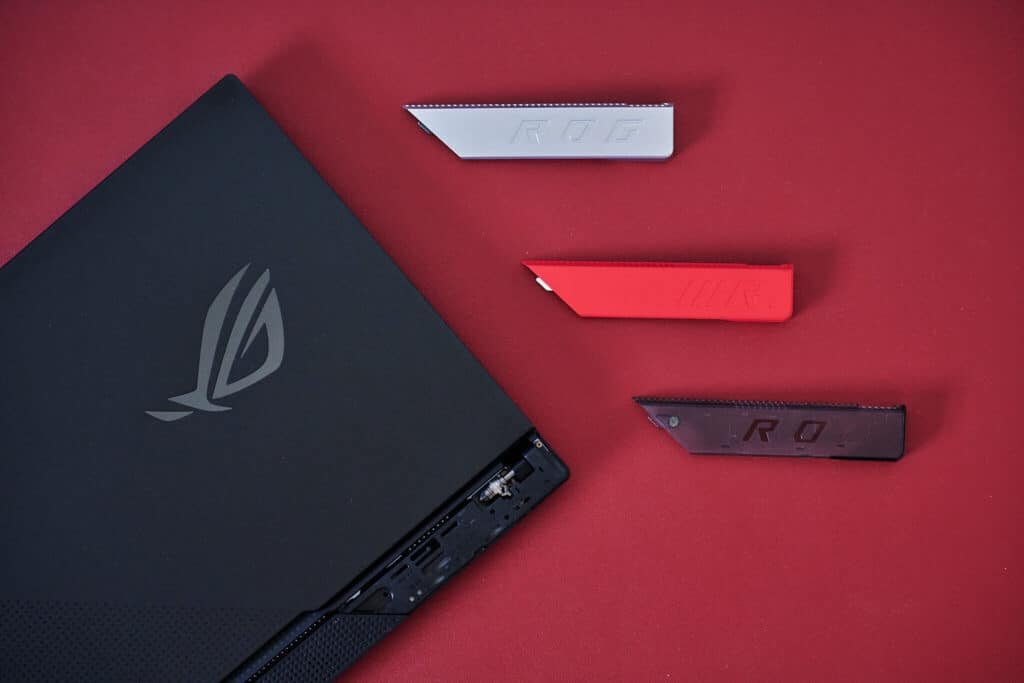 Unlike other Asus gaming laptops, the Scar, for example, the imposing ROG logo (90×45 mm), does not light up. On the other hand, we find the Armor Cap, the small removable part where ROG is registered at the level of the screen hinges. Asus provides 3 in total, but if you have access to a 3D printer, you can create new ones thanks to the plans available.

Opening the computer, no doubt, the Strix Advantage Edition is indeed a gaming laptop with the highlighting of the ZQSD keys in translucent white. There is also a 45 ° cut effect on the right side of the chassis, still, with the letters, ROG superimposed. 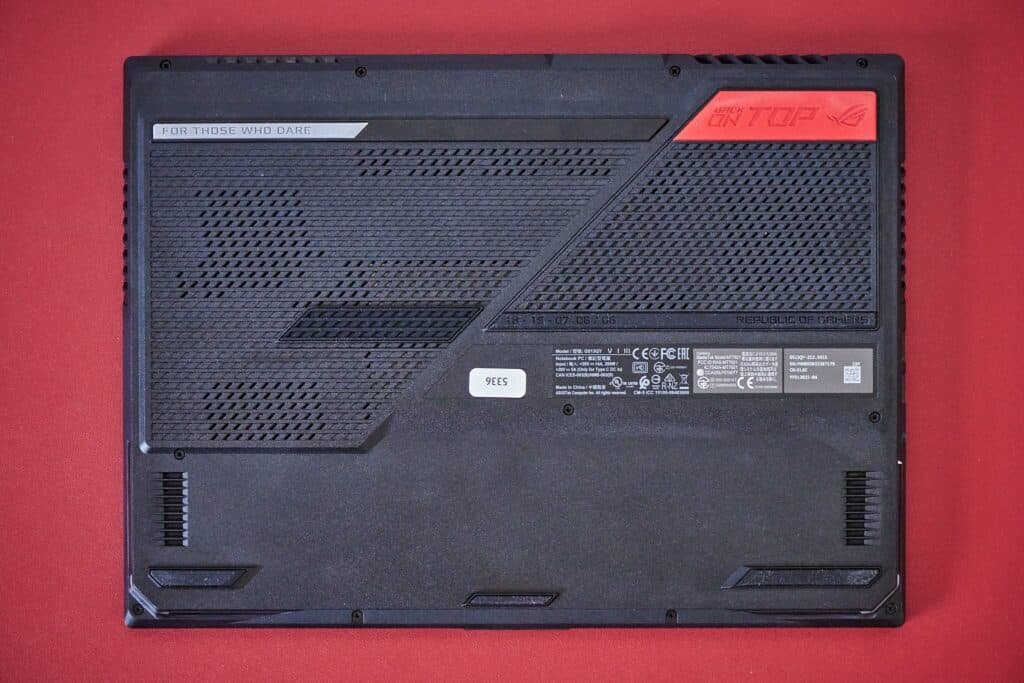 The underside of the chassis has not been forgotten with pretty rubber pads with a worked design. Access to the components does not pose any particular difficulty, provided you have a small object to leverage and unlock the numerous clips without damage. Be careful; two small cables are connected. So do not try to detach the bottom before having disconnected them.

We discover an imposing cooling system with two fans of large diameter for a laptop PC. Both RAM slots are accessible, as are the two SSD (NVMe) ports. 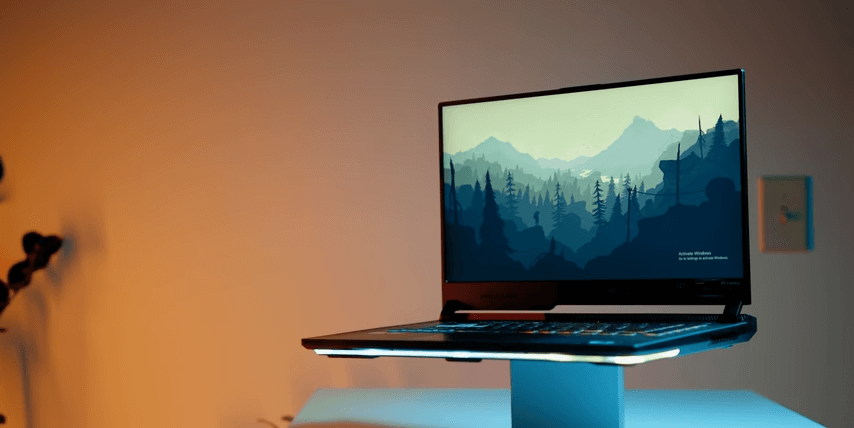 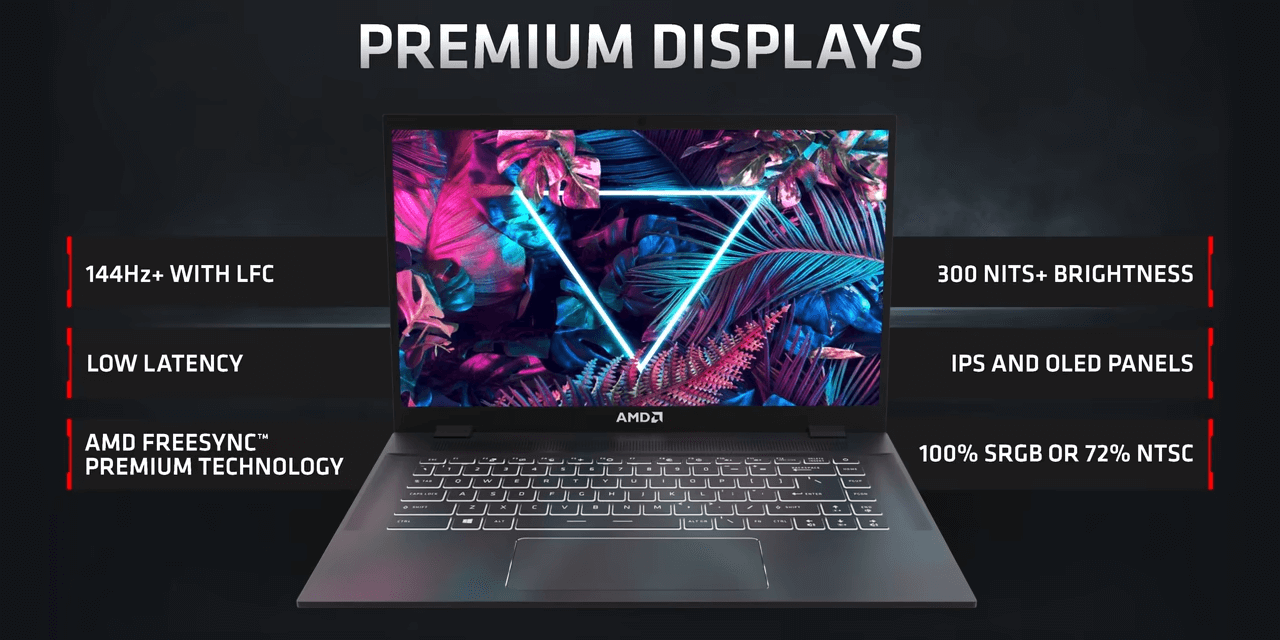 The Strix Advantage Edition is offered with two different screens, one Full HD 300 Hz, which equips the model tested. Both are also FreeSync Premium compatible. A second, WQHD (2560×1440 px) 165Hz 3ms will also be available.

In addition to a more interesting definition, the latter also stands out for the total coverage of the DCI-P3 space against only the sRGB space on the Full HD panel. To see according to the prices charged, but, in our opinion, it is, therefore, better to favor the WQHD screen.

As for other characteristics, the Sharp brand Full HD panel (LQ156M1JW25 – SHP152C) displays a maximum brightness of 320 cd / m2 for a contrast ratio of 1156: 1. In terms of colorimetry, the white point is by default too high (7700K). It is, however, possible to adjust it downwards via the GameVisual tab of the Armory Crate utility. After characterization, the DeltaE stands at 1.34, a good result.

From an aesthetic perspective, if the borderless screen contributes to a pleasant design, Asus has not seen fit to try to integrate a webcam. Too bad, it will therefore be necessary to equip yourself with a USB camera. We will console ourselves with the rather convincing microphones (for a laptop).

After these aesthetic considerations, it is now time to take an interest in the uniqueness of this Asus ROG Strix Advantage Edition, namely the presence of a configuration based on an AMD processor and graphics card assembly. 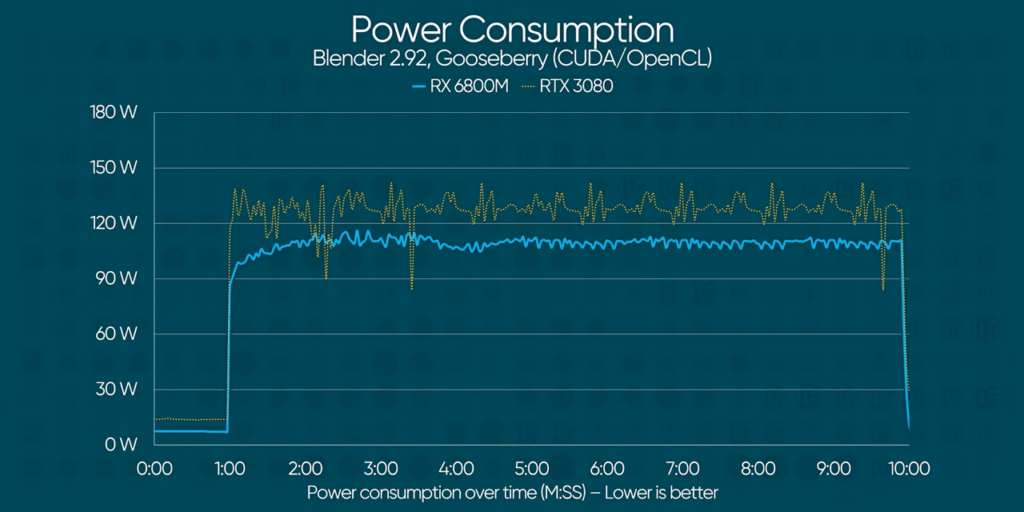 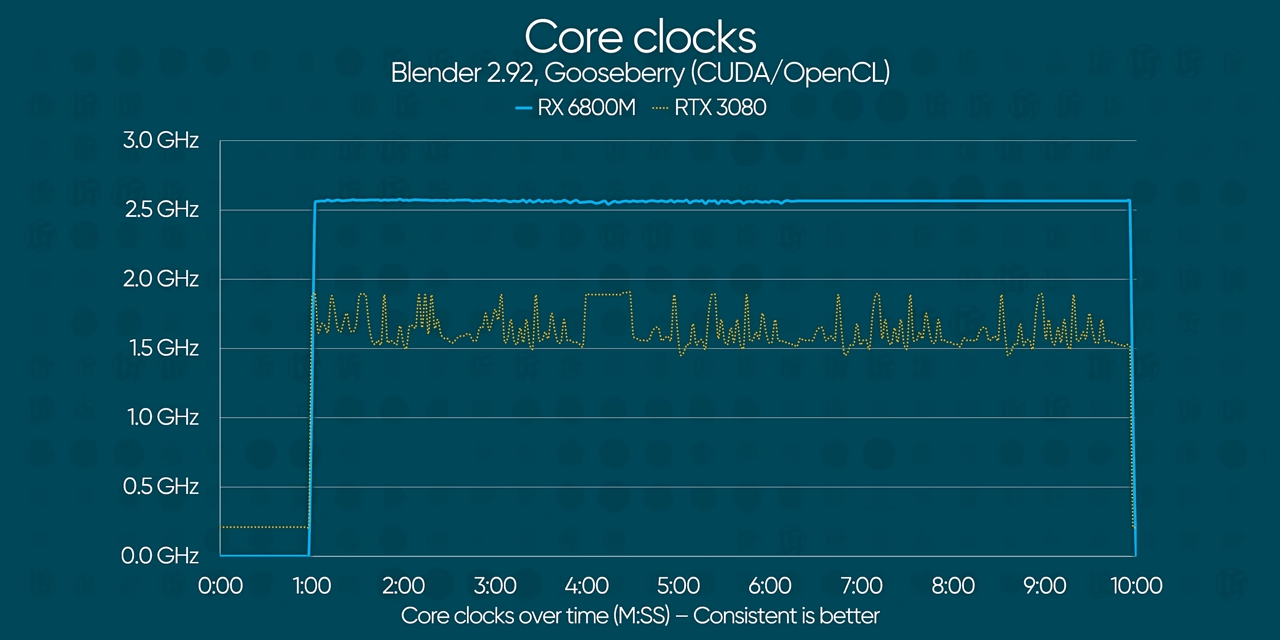 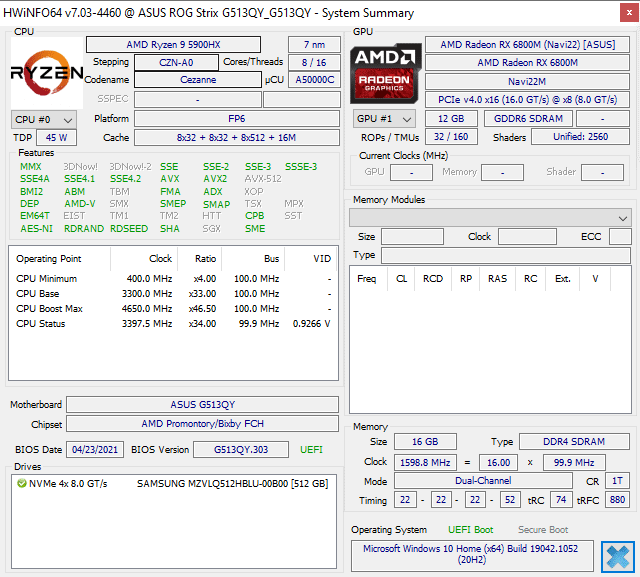 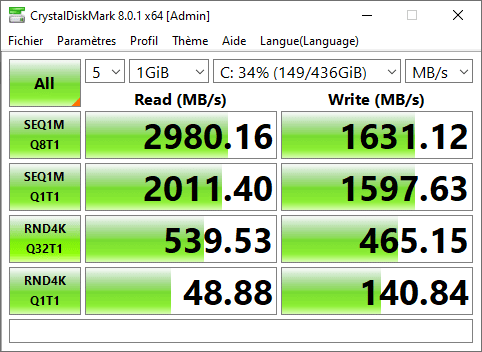 If the first characteristic is now common, the latest Ryzen being currently the most powerful processor of the moment as we had the opportunity to see in our test of the Ryzen 9 5900HX, the second is less so. 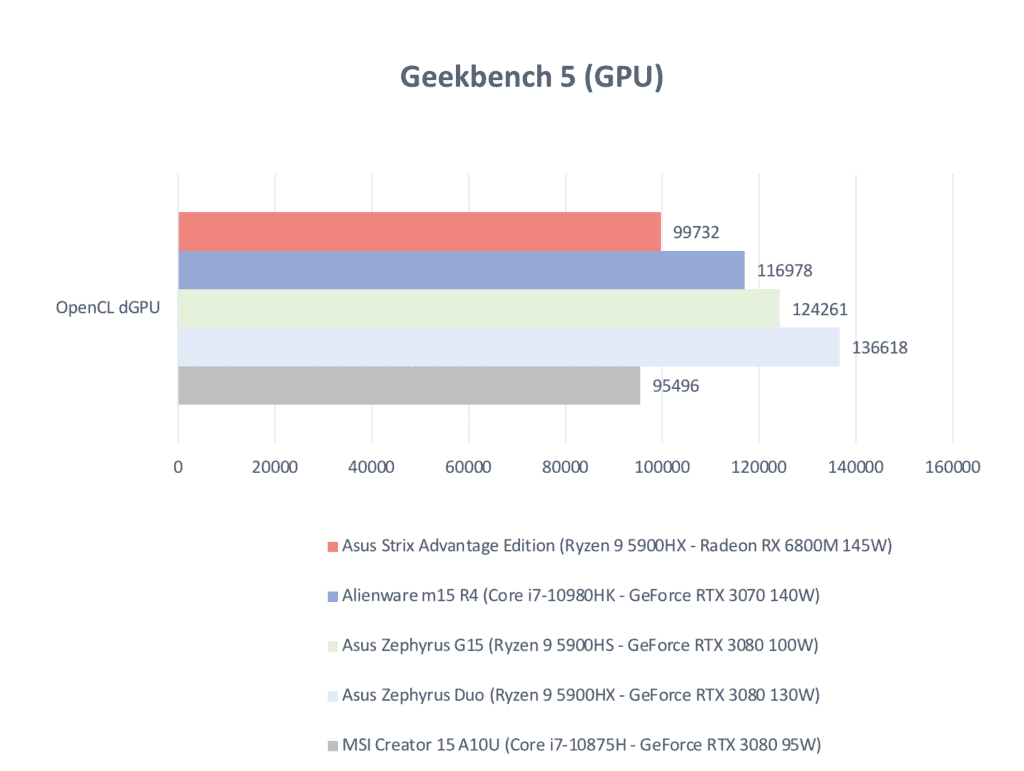 The Asus ROG G513 is the first laptop PC to embed the new Radeon RX 6800M, just announced at the Computex. Based on the latest RDNA 2 architecture, the RX 6800M is the most powerful trio of AMD graphics cards destined to titillate Nvidia’s hegemony with its GeForce RTX in the gaming laptops market. Based on a Navi 22 processor made up of 2560 Stream Processors and 40 Compute Units, the RX 6800M has 12 GB of RAM associated with a 96 MB Infinity Cache.

So what is this Radeon RX 6800M worth in practice? Has AMD kept its promises, and can it now compete with an RTX 3080? 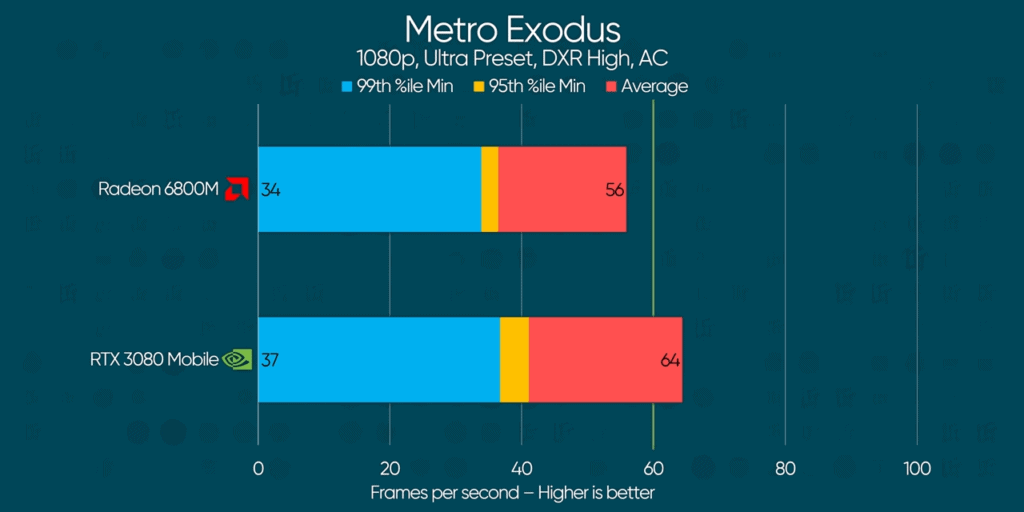 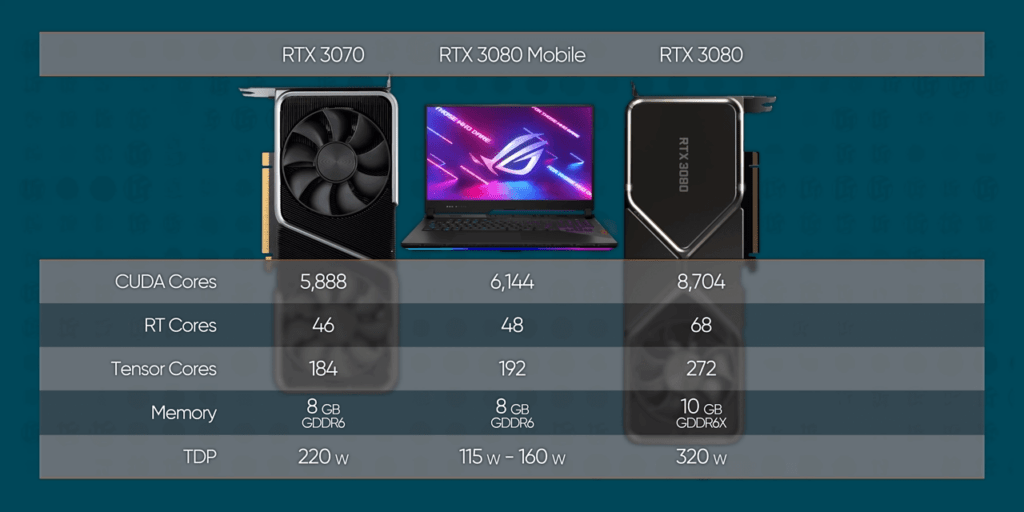 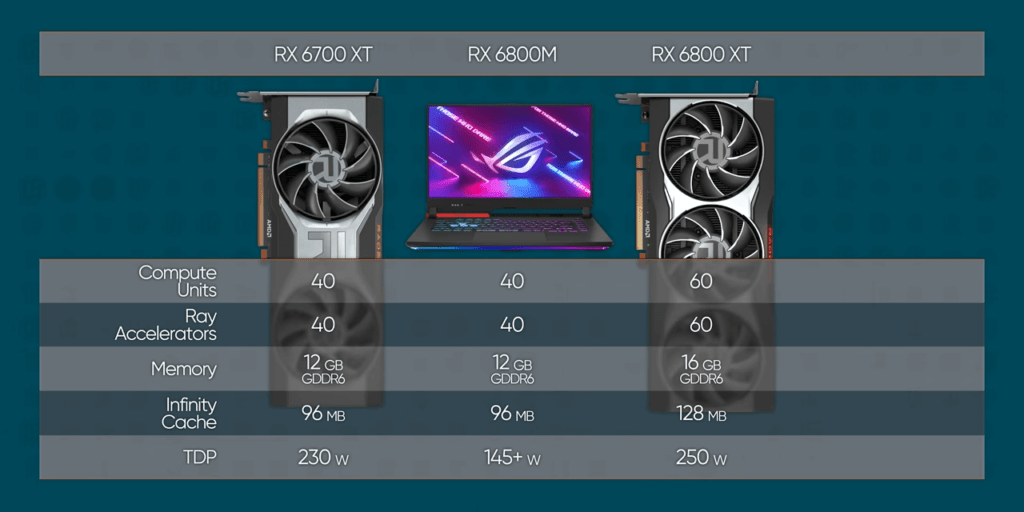 In practice, the RX 6800M offers an average of 90/100 + FPS on the latest AAAs with an Ultra level of detail in Full HD. By activating Ray Tracing, it is more reasonable to expect an average of 50/60 FPS. But Ray Tracing is always tricky for gaming laptops, even if Nvidia is doing well on some titles, thanks to DLSS. To see to what extent the upcoming arrival of AMD FidelityFX Super Resolution, the response to DLSS from Nvidia, changes the situation or not. 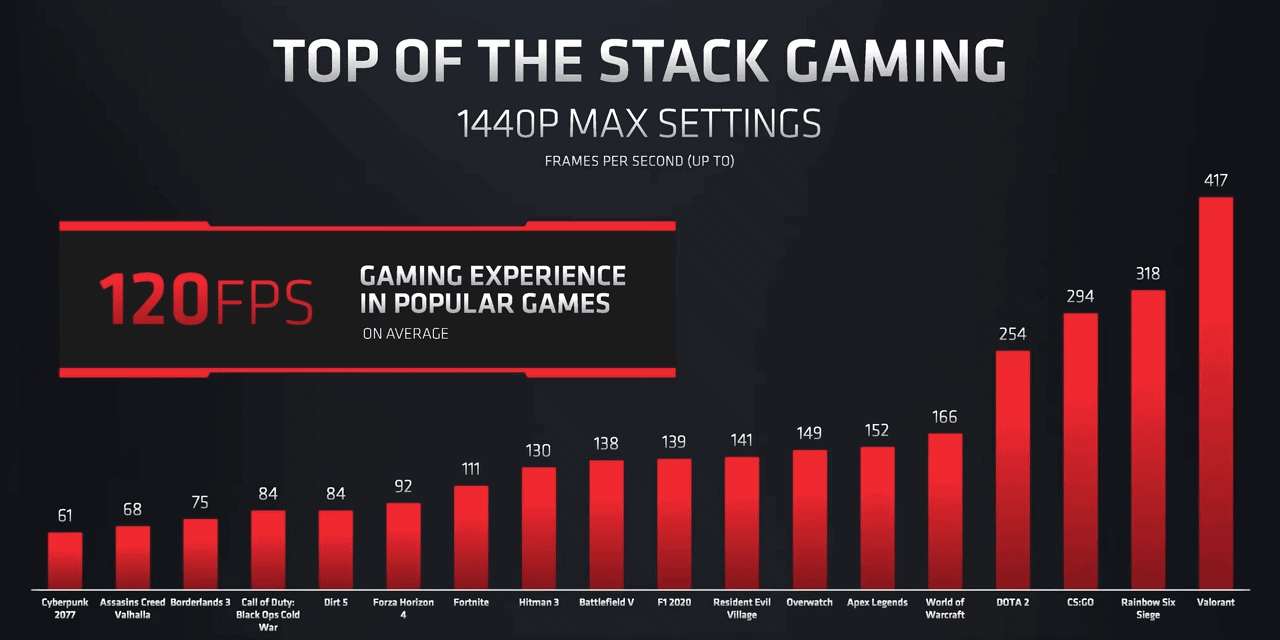 The implantation of the connection leaves no doubt as to the gamer DNA of the G513. No port on the right side so as not to interfere with the movement of the mouse; most are positioned on the backside. A little more practical for “cable management.” 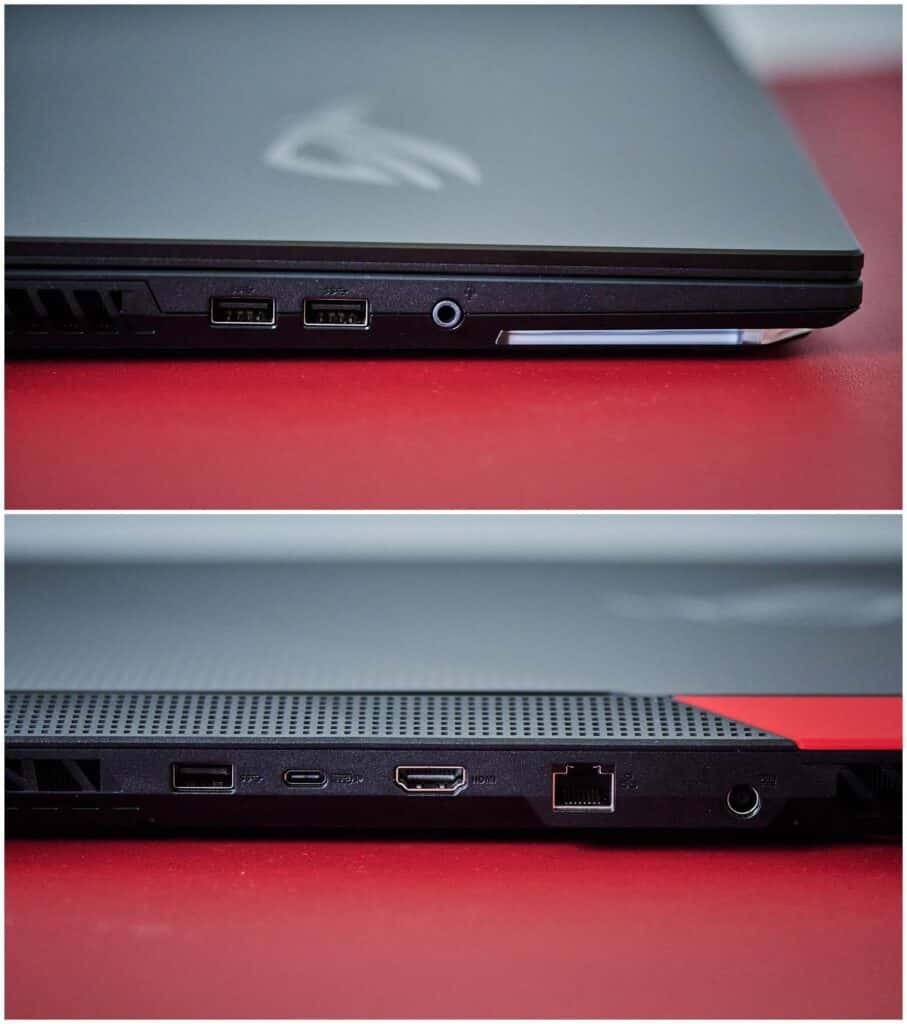 The mains power socket, an Ethernet port, an HMDI, a USB-C (compatible load within the limit of 100W and DisplayPort), and a USB-A are present. The G513 receives 2 additional USB-A Gen 1 ports and a combo mic/headphone jack on the left.

A complete connection, therefore, even if a USB-C port on the side, would have been practicing daily to quickly connect an external SSD without having to go to the back of the chassis.

With two small speakers located under the palm rests, this Asus ROG Strix Advantage Edition is not the best equipped to put all the ears.

If the volume is not lacking in power, it is better not to exceed 60%. Otherwise, the distortions will be amplified. Below, the rendering is quite typical of a laptop. Correct, and sufficient for occasional use, but little more.

As for the Dolby utility, if it manages to improve the rendering significantly, it is better not to leave it in dynamic mode to favor other profiles, often more convincing.

If the dimensions of the keys are classic (15.5×15.3 mm), their spacing (4.1 mm) and especially the stroke well above the average (1.8 mm) leave no doubt: the keyboard of this ROG has well thought out for the players above all. However, its soft touch, associated with a muffled sound, is suitable for much more versatile use, including writing.

Aura Sync compatible, the backlighting can be personalized according to 4 zones. You can also choose from five effects. No fingerprint sensor for Windows Hello, however. It’s a shame, especially since the Strix Advantage Edition G15 does not have a webcam. 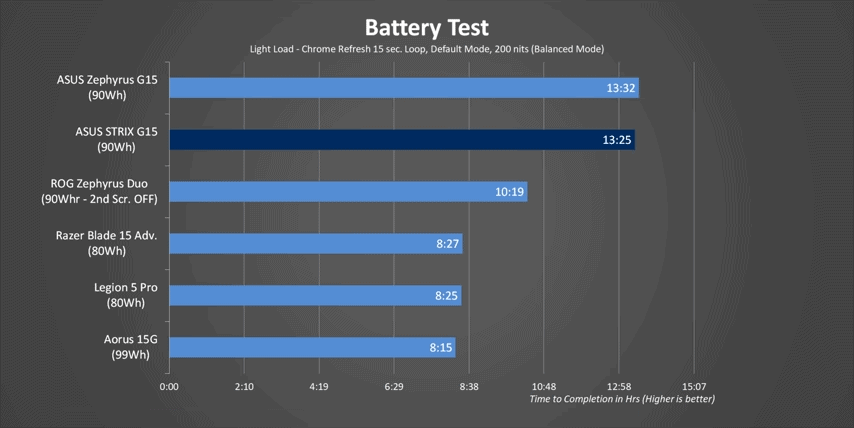 Due to its dimensions and muscular configuration, the Strix G513QY is a priori, not the best equipped for nomadic use. But that’s without counting on its large battery and good energy management. In practice, he is doing very well.

The 240W power supply unit is not compatible with nomadic use (175x85x35 mm – 565g). On the other hand, it is still possible to use a USB-C charger but with a limit of 100W. Insufficient to maintain the battery charge in play, for example.

In this regard, if you use your laptop PC on mains, you can set the charging threshold via the Asus utility.

Another reason is the most important in our eyes; a gaming laptop PC should not be reduced to its performance. It may seem paradoxical, but many tend to forget it. A laptop, unlike a desktop, is above all an inseparable whole, whose lifespan will by definition be limited. It is not possible to upgrade essential components such as the processor, graphics card, or to a lesser extent, the screen. Conceding any of these features involves dealing with them throughout the life of the computer.

Some people are probably wondering where we are going with this? Well, in this perspective of finding a homogeneous laptop PC, the ROG Strix Advantage Edition G513 is the one that has convinced us the most in recent months.

There remains one last point, and not the least, the price. Announced in 2400 USD, the ROG Strix Advantage Edition will face a lot of competition. However, we can bet that the “Street Price” will quickly become more aggressive after the novelty effect. Asus / AMD with the ROG G513QY would then have all the cards to position itself as a star for the summer of 2021 for gamers!