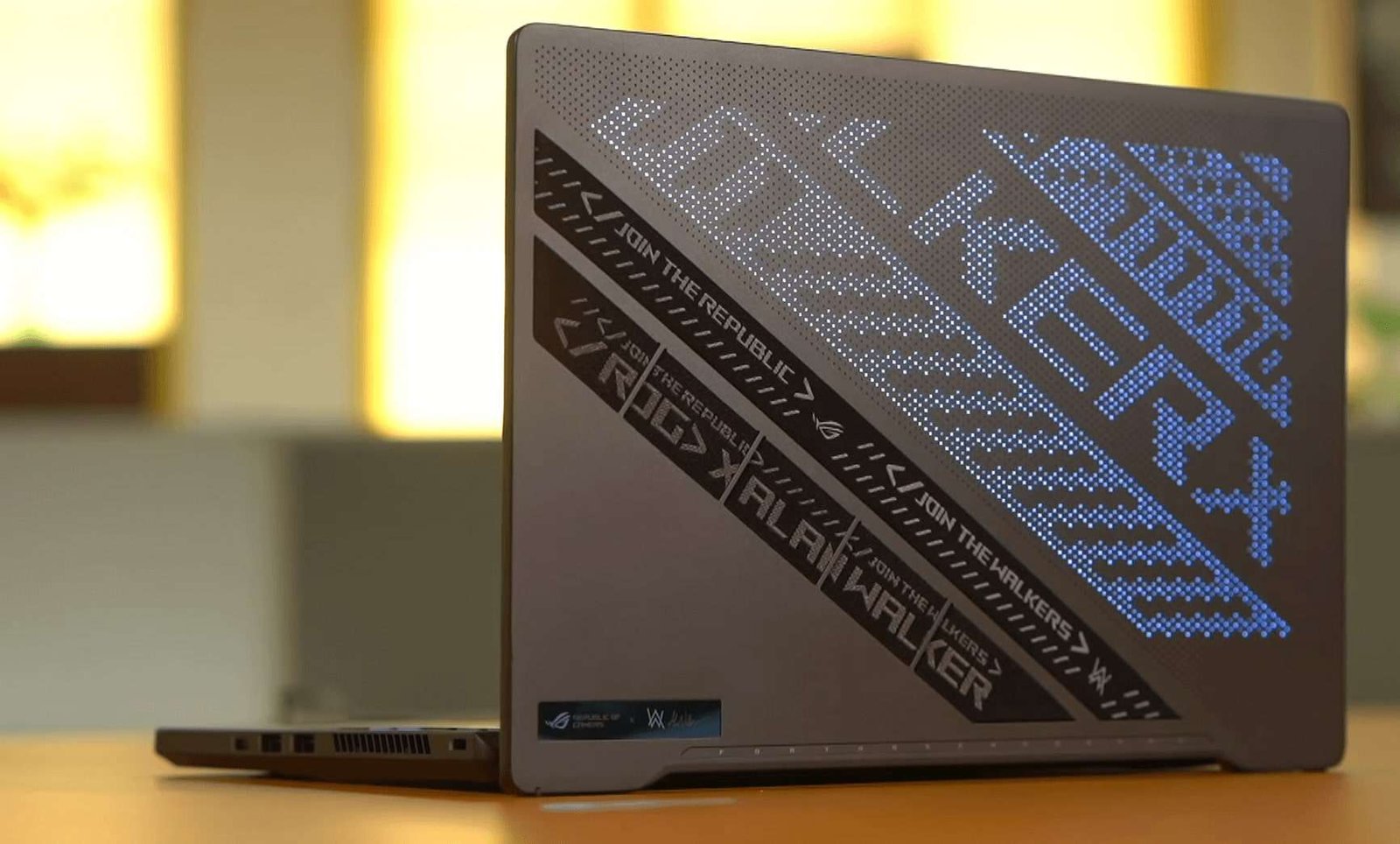 ASUS ‘idea of ​​the collaboration turned out to be successful, as the company decided to launch the limited-edition ROG Zephyrus G14 of the 2021 model this year. The new laptop was created in collaboration with Norwegian DJ and producer Alan Walker, who was best known for his song ” Faded ” in 2015.

Original design in partnership with the famous DJ for the Asus Zephyrus G14 Alan Walker GA401QEC-064T, Portable PC gamer oriented creator nomad with its autonomy of 7 hours. Ready for High Definition with its 14-inch Pantone IPS WQHD anti-glare display that improves gaming smoothness with its 120Hz frequency and displays more faithful colors than average, this versatile compact laptop benefits from a fast SSD storage of 1 To which reinforces its responsiveness. 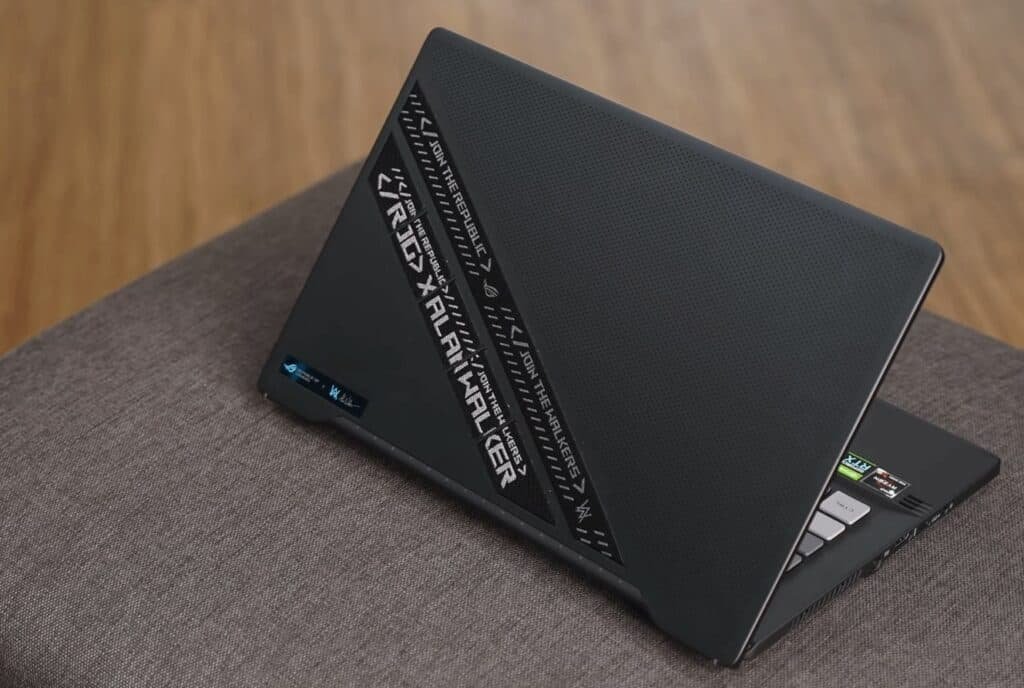 Power is on the program of this laptop PC designed to play and create thanks to its AMD Octo Core Ryzen 9 Cezanne processor, its 16 GB of RAM and its GeForce RTX 3050 Ti which accelerate multimedia processing and allow you to play a number of titles. Backlit keyboard as well as Wi-Fi ax and USB-C connectivity are also on the program, as is a cover provided. 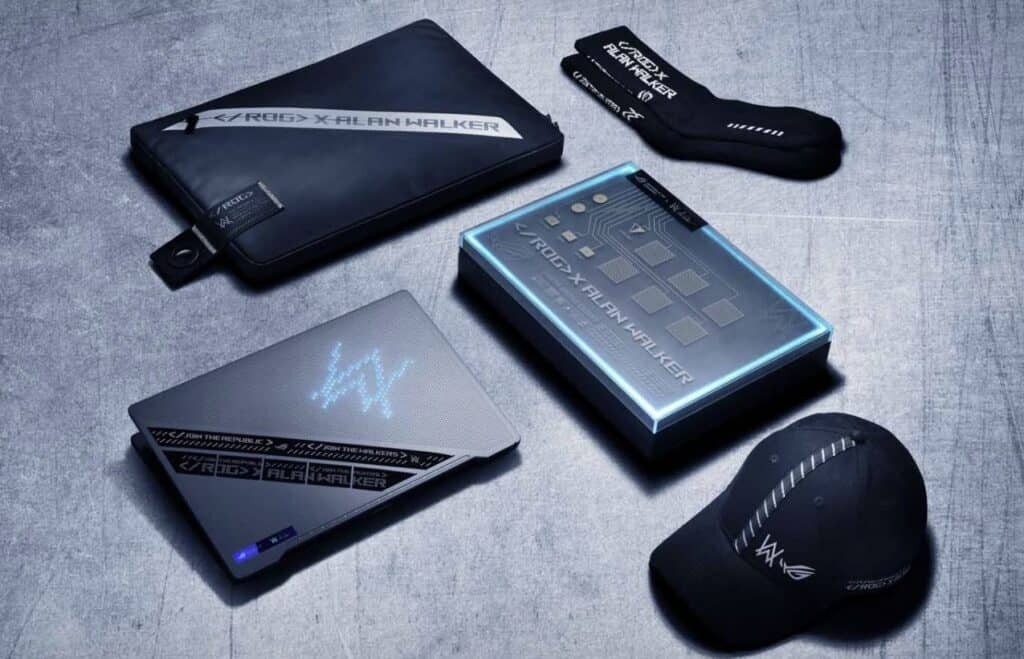 The box in which the laptop was stored. There is a recess on the side of the package where the manufacturer installed the USB-C connector. When you connect a computer to this connector (the USB-C cable is for), the system will instantly launch the ROG Remix application, and the outline LED backlighting is activated inside the box. Here you understand that we have another hidden accessory in front of us – a sampler. Using the touch buttons on the plexiglass lid, you can create your mixes in the ROG Remix app.

The touch panel allows you to play and pause the current track, speed up and slow down the playback speed, and use a low-pass filter that can cut off high-frequency content by setting the spectrum limit, on which the cut-off of frequencies occurs. Six large buttons are responsible for playing 18 recorded samples for this accessory. You can switch between the lists of examples by alternately pressing the button in the shape of a triangle. In general, it is not a bad toy for those fond of music, but the average user will most likely abandon it in a couple of evenings.

RELATED:  M1 MacBook Air vs M1 MacBook Pro 13: Which Mac Should You Buy

The Asus Zephyrus G14 Alan Walker GA401QEC-064T. It meets every few competitors in its category. It is one of the few to benefit from such a powerful processor, high definition screen, and an SSD of such large capacity in such an original, slim design. And compact. 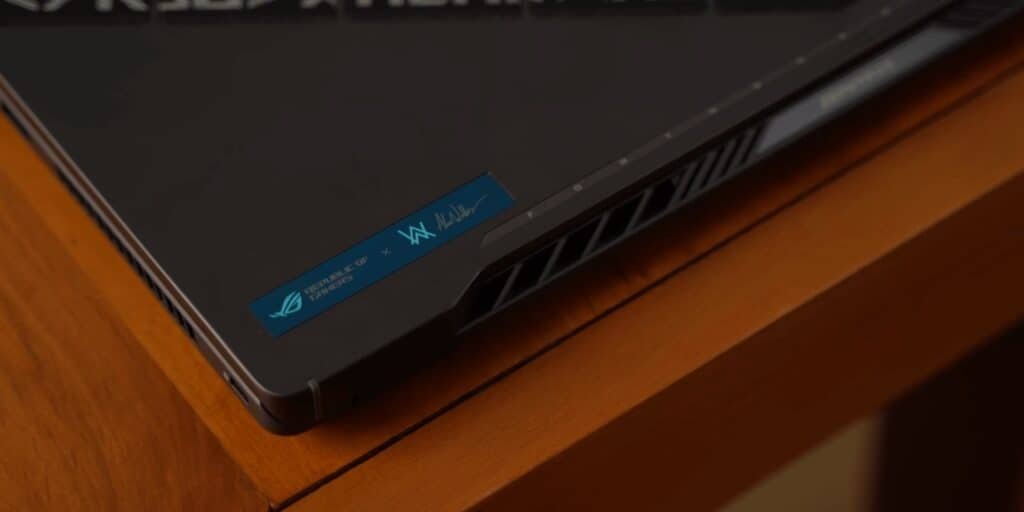 If this Asus Zephyrus G14 Alan Walker GA401QEC-064T does not meet all your criteria, you will find other configurations on our laptop gamer guide to playing with a similar budget. For the same budget, choose the model with the most powerful graphics card; it will have the most impact on performance.

The laptop received a screen from Thermotrex Corporation. It is an 8-bit IPS matrix with a matte antiglare surface, QHD resolution (2560 x 1440 pixels), and a refresh rate of 120 Hz. The maximum brightness is 300 nits, and the contrast ratio is 1000: 1. With such a brightness, it will be impossible to use a computer outdoors under the direct light of the sun, but it is not made for this.

To prevent tearing and distortion in dynamic scenes, the model’s screen is equipped with Adaptive-Sync technologies. The response time from gray to gray is 3ms. The matrix supports a color gamut of 100% sRGB and 84% Adobe RGB. Color reproduction is high when viewed from any angle. Also, from the pleasant moments, it is worth mentioning the complete absence of PWM when the brightness is reduced. The backlighting of the screen is uneven – we noticed several highlights on the lower part, including one large one almost in the center of the lower edge. 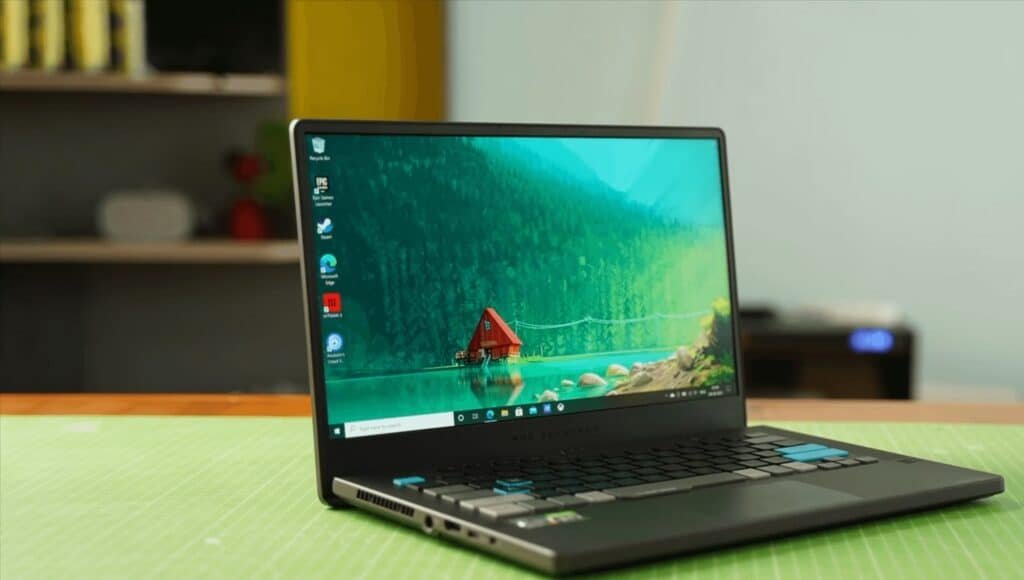 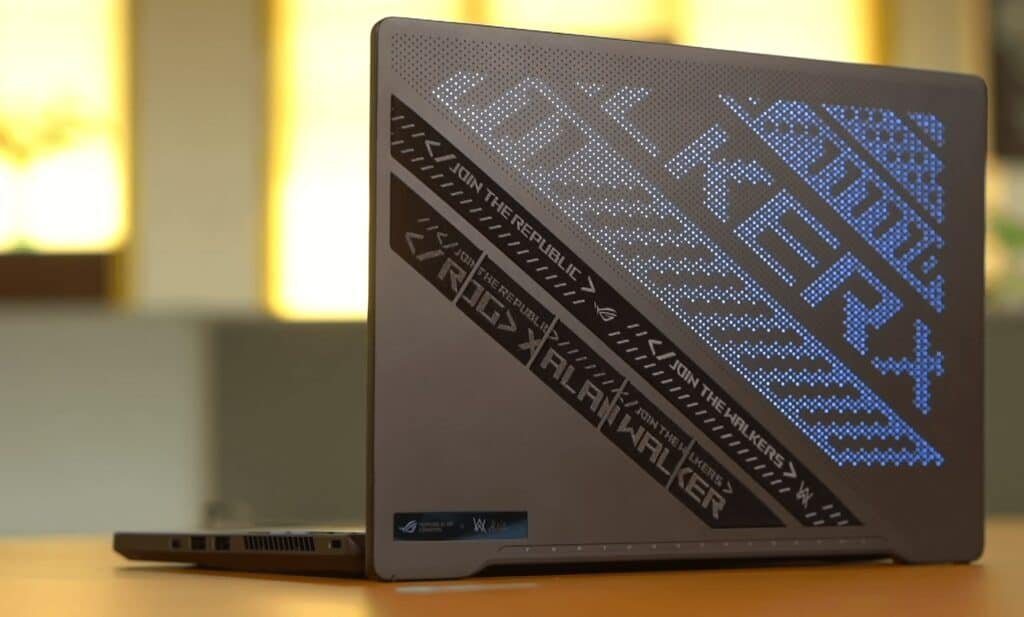 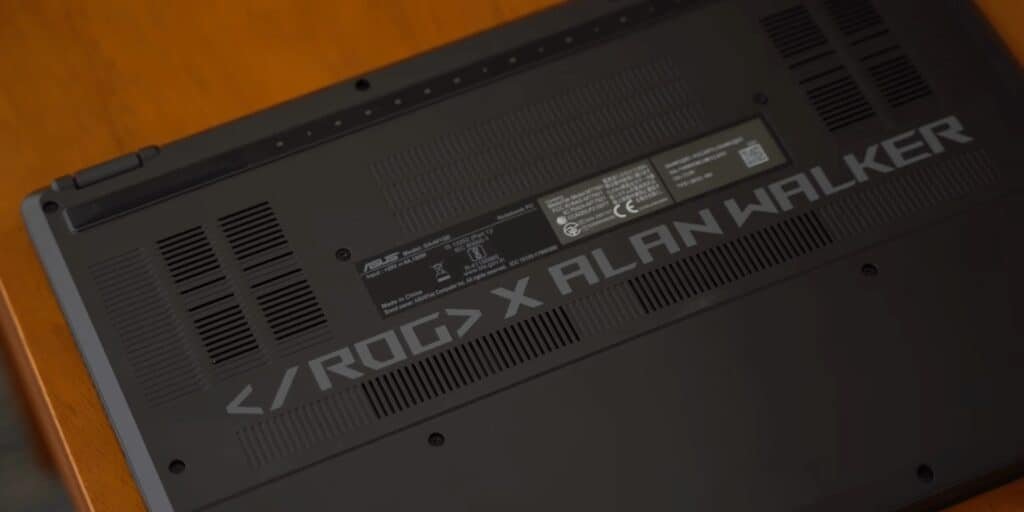 Designed in partnership with DJ Alan Walker, it features an original gamer allure in dark gray tones, AniMatrix animation On the shell, and touches of color.

Housed in special packaging, it is supplied with a protective cover. It is cooled by ROG Intelligent Cooling technology which uses two n-Blade fans (81 blades), heat pipes, and air vents.

The screen will like by both creators and players because it promises to be IPS 100%, DCI-P3 Pantone. As a result, it has horizontal and vertical viewing angles, reproducing colors much more faithfully than average. As a bonus, it is very well suited to display High Definition content thanks to its WQHD definition being superior to Full HD.

Thanks to its frequency of 120Hz, the screen also improves fluidity in games compared to a 60Hz panel. Anti-reflective coating, the screen also offers better visibility than a shiny panel in a bright environment (eg, outdoors). 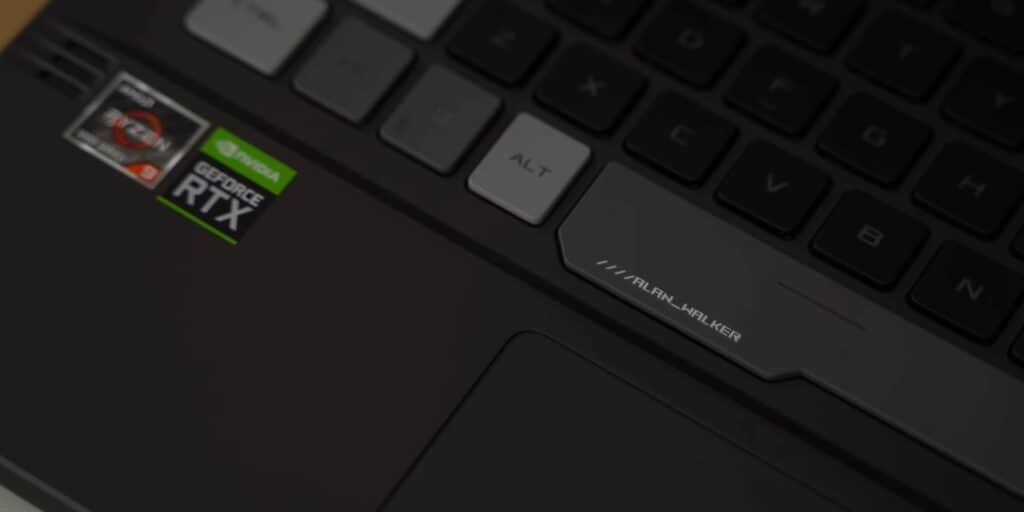 The Asus Zephyrus G14 Alan Walker GA401QEC-064T may be of interest to those looking for a versatile, compact, robust, and nomadic laptop PC-oriented game and creation adopting an original design and ready for High Definition.

The all-around power of this portable PC designed to create and play is sure to satisfy demanding users because its heart consists of 16 GB of RAM and an AMD Octo Core APU (Accelerated Processing Unit) Ryzen 9 5900HS Cezanne processor.

This duo notably guarantees much faster processing than 8 GB DDR4 and a Quad / Hexa Core processor. The difference is particularly notable in greedy areas in RAM and CPU resources using multicores, such as video editing, 3D rendering, or retouching.

Therefore, something to appeal to creatives significantly as the dedicated onboard GeForce RTX 3050 Ti graphics card can speed up processing under software that takes advantage of GPU computing power (e.g., Sony Vegas, Adobe Premiere / Photoshop).

Equipped with the NVIDIA Ampere architecture, the GeForce RTX 3050 Ti ray tracing will also be of interest to gamers since it can run a large number of games if we agree to adaptations under the titles that consume the most graphics resources. Note that WQHD requires more calculations from the GPU than Full HD, which implies a lower number of fps.

NVIDIA Optimus technology assesses graphics needs in real-time based on the tasks performed and activates the GeForce RTX 3050 Ti if necessary. This is requested when the more modest services of the AMD Radeon Vega 8 solution integrated into the Ryzen 9 Octo Core Cezanne prove to be insufficient to perform the desired tasks.

Of course, you can watch photos and videos, whether with the GeForce RTX 3050 Ti or the Radeon Vega 8. The Vega 8 is, however, preferred as much as possible by Optimus because it is energy efficient, which promotes autonomy. 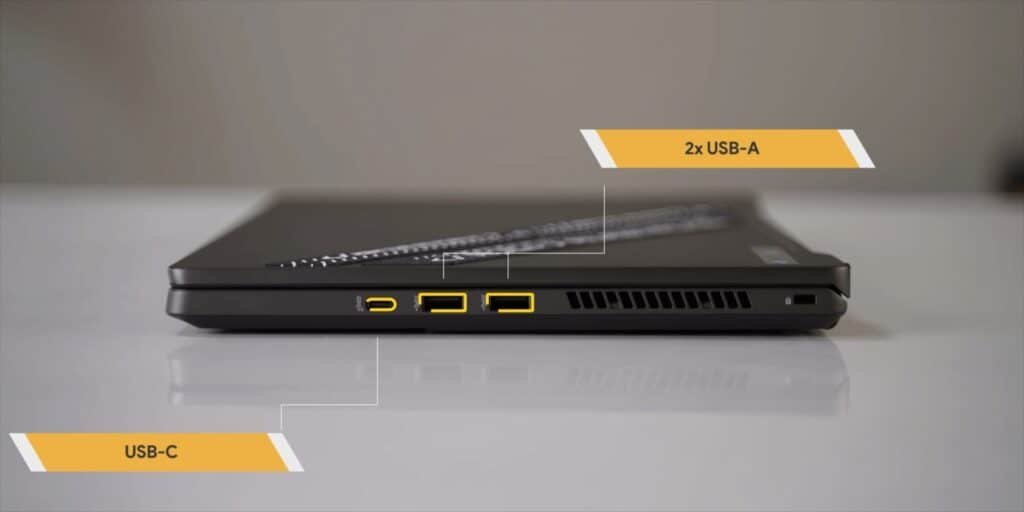 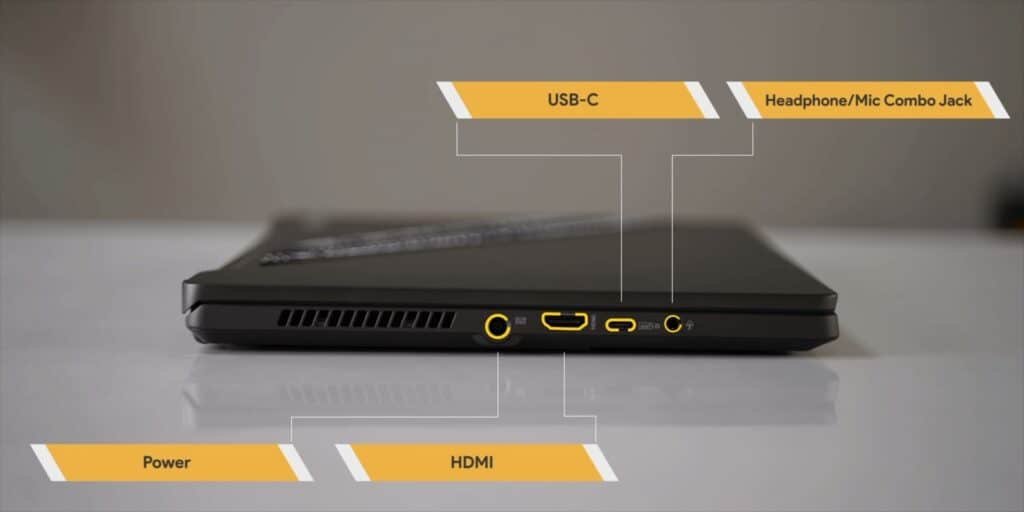 This designer gaming laptop PC benefits from a good connection, including 2 USB-C (against one maximum usually), wireless Bluetooth 5.0 and Wi-Fi ax modules ( more recent and efficient than Wi-Fi ac ) to communicate and connect remotely, a helpful HDMI video output to easily connect it to a TV or monitor, for example, an audio port but also 2 USB 3.0 (USB 2.0 compatible) guaranteeing transfers up to 10 times faster than in USB 2.0 if you plug in USB 3.0 peripherals. 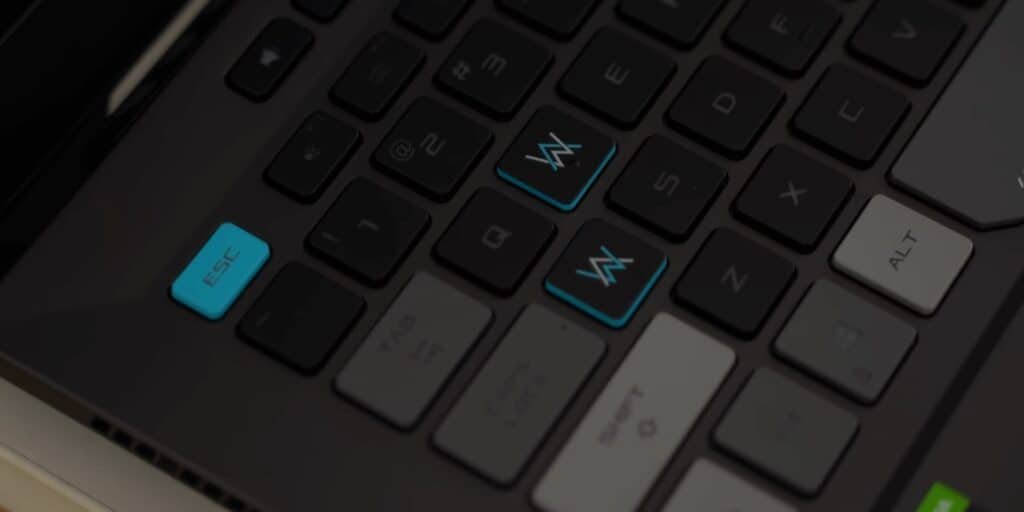 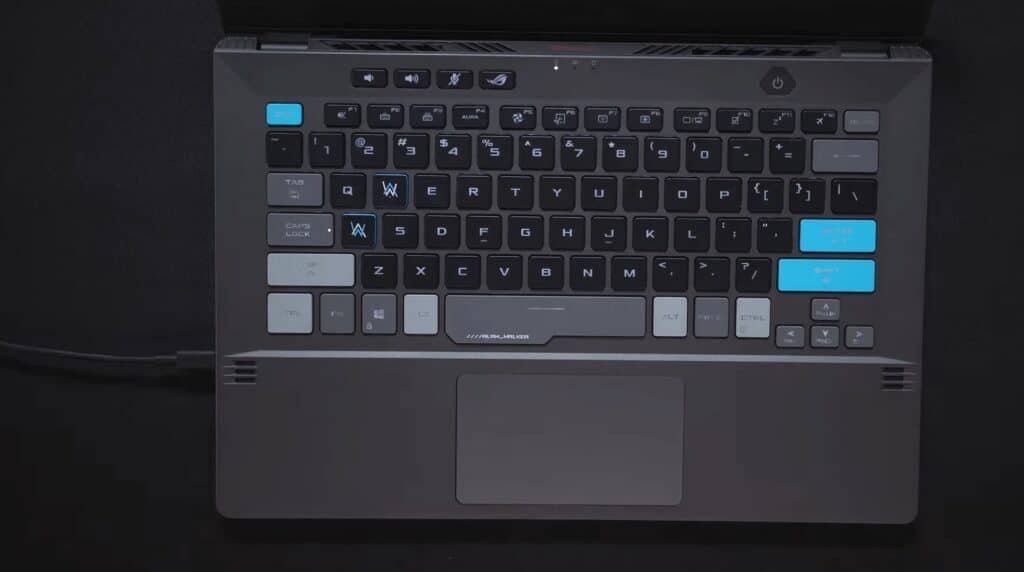 When it comes to battery life you will get 7 hours of battery in light use. The onboard storage in this compact multimedia laptop PC is up to the task because it is entrusted to an SSD with a high capacity of 1 TB that easily rivals hard disks in this area.

ASUS ROG Zephyrus G14 Alan Walker Special Edition is a laptop made for the electronic music fanatic. It is perfect for those who like to create mixes and those who like to stand at the remote control in clubs or at parties, as it will attract others by its appearance. On the other hand, it can hardly be called a powerful gaming solution, as the 3050 Ti has poor performance. You expect something more powerful from a limited edition laptop for such a high price. On the other hand, it is perfect for work and watching movies on the road, thanks to its great autonomy, compactness, and fairly lightweight. We generally have a device from fans and fans, which will sell out anyway since minimal circulation.