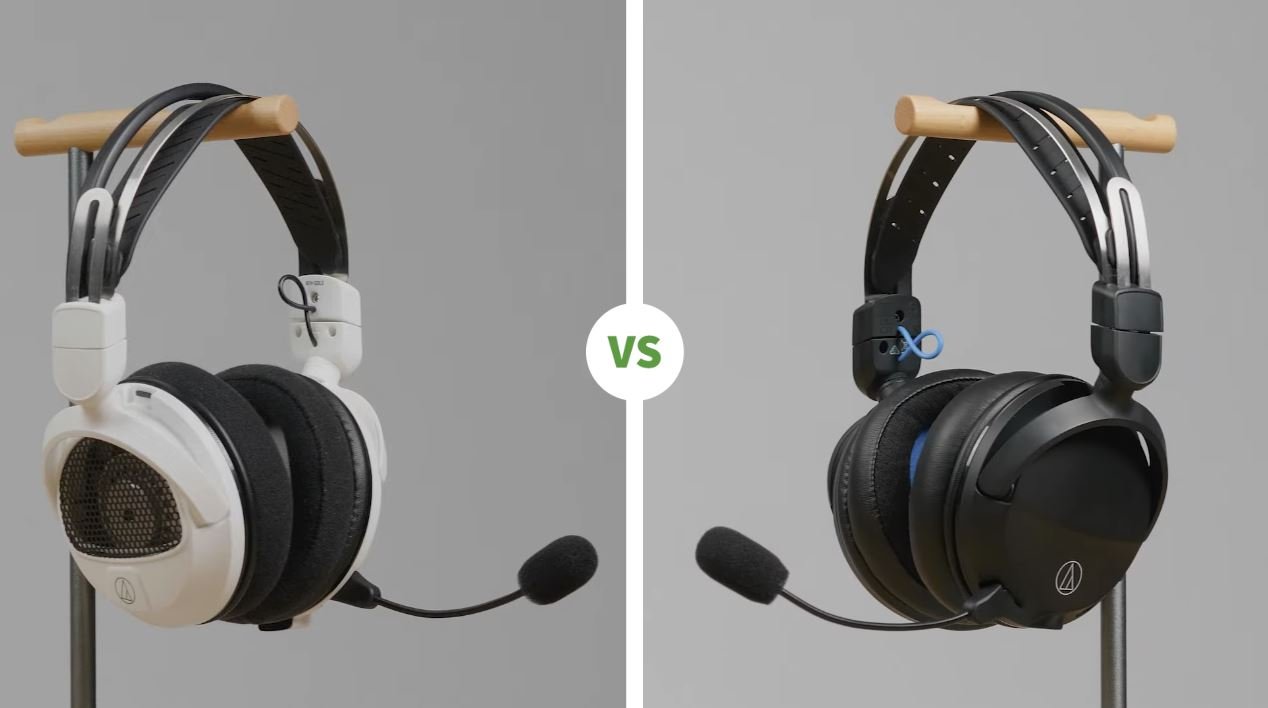 At Audio-Technica’s 2021 new product launch conference, two new gaming headsets, ATH-GDL3 and ATH-GL3, were officially introduced to the world. If you remember, it has been since Audio-Technica’s last launch of game-specific headset microphones. It was two years ago.

Audio-Technica has not launched many gaming headsets over the years; every time it is launched, it has received quite good reviews from players. We can find that Audio-Technica has never used dazzling RGB lighting effects as a gimmick, let alone pursued it blindly. The wireless function increases the weight of the headset. From the beginning to the end, the headset’s ultimate goal is to create the best listening experience, to create every product that suits the needs and tastes of the user. The newly launched ATH-GDL3 and ATH-GL3 gaming headsets this year, what kind of sparks will burst out? People look forward to it.

The Audio-Technica’s newly launched ATH-GDL3 and ATH-GL3 gaming headsets are still like twin brothers, except that ATH-GDL3 is an open type, while ATH-GL3 adopts a closed design through inherent structural differences. , Which creates a completely different sound quality; it can only be said that no matter which one it is, it is quite worth a try.

Different from other brands, for over-ear gaming headsets, Audio-Technica tends to provide closed and open styles for advanced players to choose from. In the face of closed-end headsets that are mainstream in the gaming market, Audio-Technica, With its unique technical research and development capabilities, expands areas that most gaming headsets cannot reach. This persistence and professionalism can be one of the biggest features of Audio-Technica’s gaming headset products.

The ATH-GDL3 first. As an open earphone, the metal mesh cover on the outside of the earmuffs is naturally the most prominent feature in its appearance, and due to the large openings, you can directly see the inner single through the mesh. Body structure, so the internal monomer has also undergone color separation. The black version of ATH-GDL3 is painted with metallic blue, while the white version of ATH-GDL3 is silver. This design highlights Outside the three-dimensional level inside and outside; it looks quite full; of course, the visual ingenuity does not stop there.

The design of the ATH-GDL3 black metal mesh cover is very eye-catching. You can see the new 45mm driver unit exclusively developed by Audio-Technica through the aperture.

The support arms on both sides can be adjusted by sliding rails, and the range of expansion and contraction is not small, which can adapt to various head types.

The slide rail structure is made of metal and has a scale design. In addition, there is also a headphone model mark on the inside of the headband.

The overall design of the headband is quite special. In addition to using metal material to increase the strength, a single-piece rubber head pad is used to replace the traditional common memory foam.

The rubber head pad is the part that is in direct contact with the top of the head. In addition to being elastic and without head pressure, it can be disassembled and cleaned by itself to keep it clean at any time.

The earpads of ATH-GDL3 are covered with a flannel-like material, which is very comfortable to the touch and allows players to replace them by themselves.

The earmuffs themselves are approximately round, and the internal elliptical space can completely cover the ears and not cause pressure on the ears. There is also a more lively L/R font design on the inside of the earmuffs, allowing players to use them. It’s clear at a glance.

The control interface is located on the left earmuff, including the volume knob, mute switch, sound source hole, and microphone jack.

The black version of ATH-GDL3 adopts a black and blue design, which aligns with the tonality of gaming headsets. 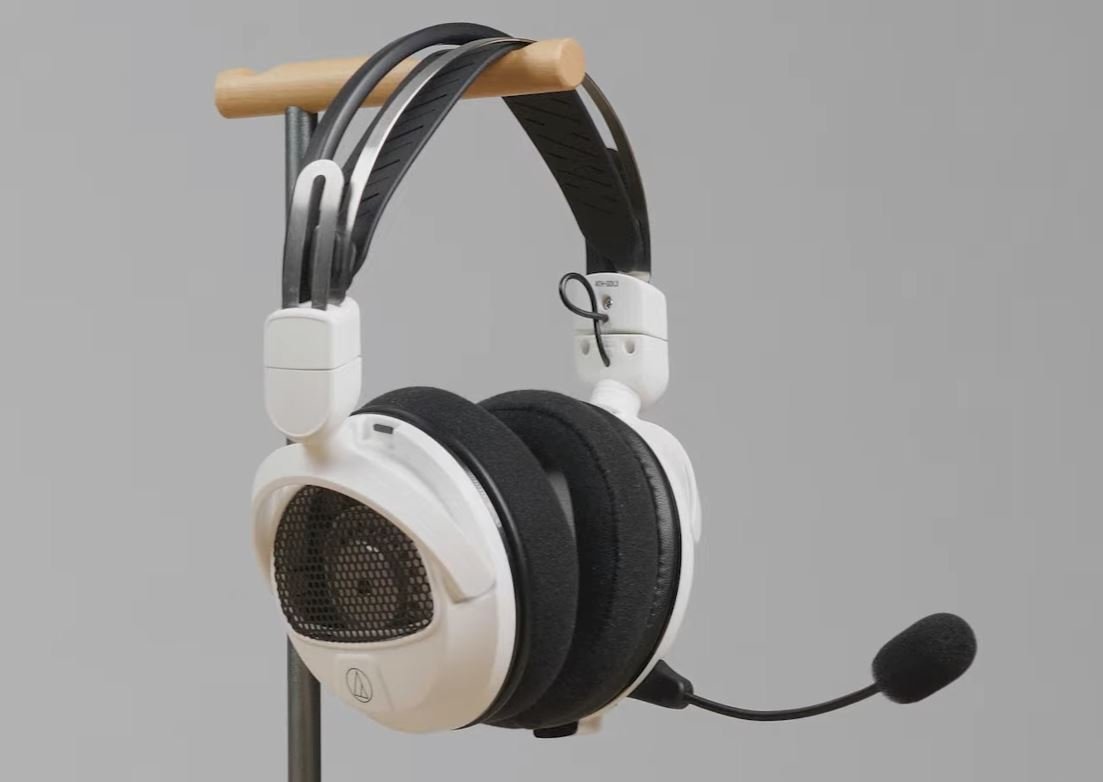 ATH-GL3 with a closed structure. The biggest difference from ATH-GDL3 is naturally the shell design of the earmuffs. Due to the all-plastic closed shell, the overall appearance looks more elegant and low-key. It is worth noting. The little place is about the earpads of ATH-GL3, which are designed with a composite material, which is different from the full flannel covering of ATH-GDL3. The earpads of ATH-GL3 are made of artificial leather and breathable material fabrics, which ensure the sound insulation effect simultaneously. It also minimizes the sultry feeling when wearing it, which can be quite intimate. In addition, ATH-GL3 is in the same line as ATH-GDL3 in the design of headrest, arm, detachable microphone, and control interface.

ATH-GL3 is a closed design, with a full plastic shell, and the arc and fold lines add a lot to the appearance.

The earpads are made of thick and soft foam and are covered with artificial leather and breathable cloth.

Due to the difference in the material of the ear pads, there are some slight differences in the tactility of the two headsets, ATH-GL3 and ATH-GDL3.

After disassembling the microphone, ATH-GL3 looks just like a normal music headset, no matter the black or white version, and can even be used as a personal style accessory. 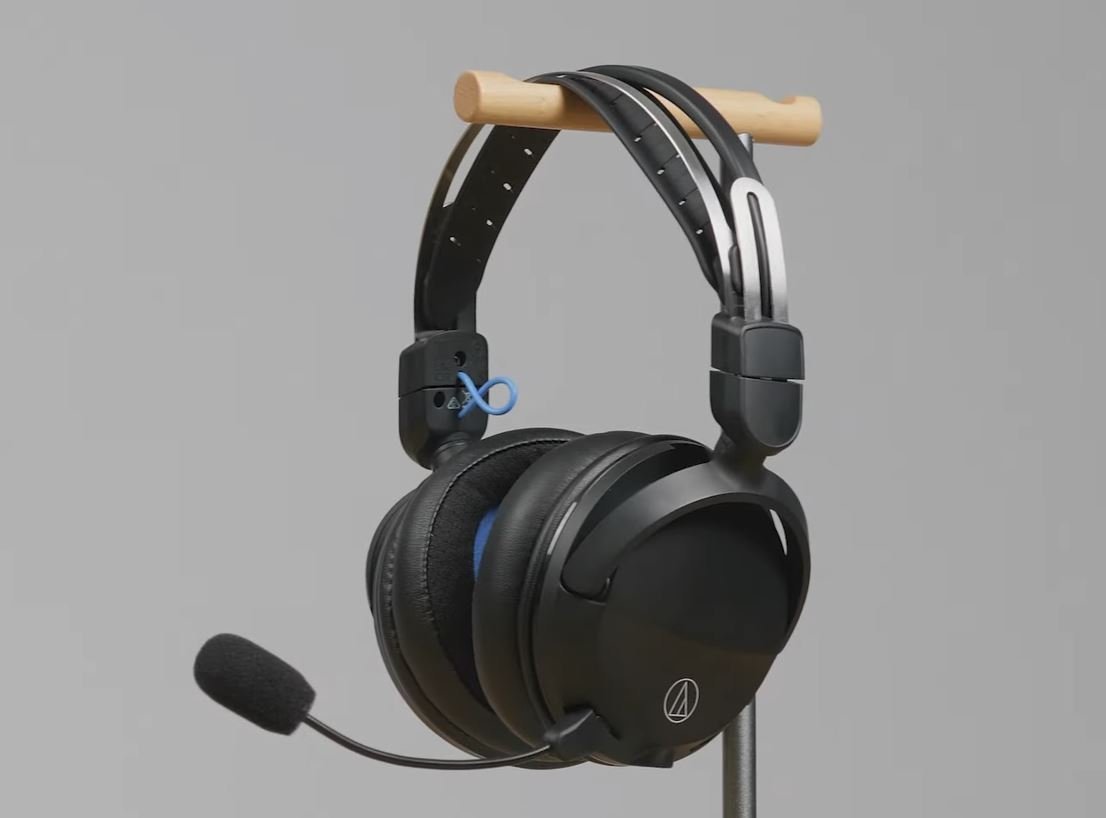 In terms of hardware specifications, ATH-GDL3 and ATH-GL3 have a 45mm moving coil unit, an impedance of 45 ohms, a sensitivity of 98dB/mW, and a wide frequency response 10～35,000Hz, which are indeed slightly better than most gaming headsets. , Especially under the blessing of the large-size driver unit, it can restore abundant sound energy.

The feeling of the first audition still retains the unique tuning characteristics of Audio-Technica; that is, the mid-to high-pitched vocals are particularly clean and clear, slightly forward, when listening to popular music, there will be no turbidity common to other gaming headsets. However, the positioning of ATH-GDL3 and ATH-GL3 is, after all, headsets for gaming, so we still have to investigate from the gaming perspective. 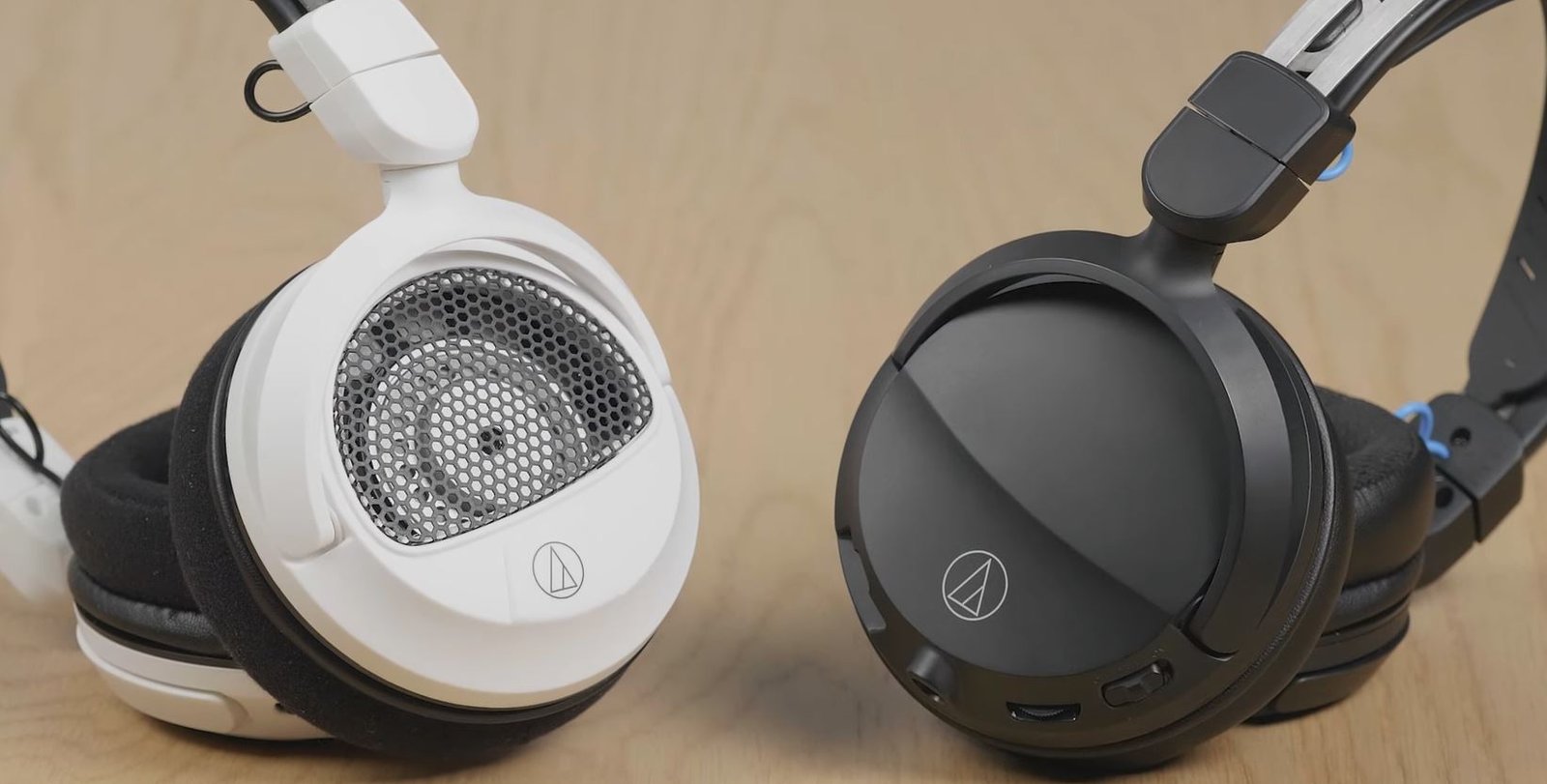 However, although the two headsets have similar hardware foundations, the open-type ATH-GDL3 and the closed-type ATH-GL3 bring the “sound” performance of the game to different realms.

ATH-GDL3 creates a sense of space and air that is closer to reality. Although the open structure will slightly weaken the low-frequency resonance effect, the overall environment atmosphere is more natural. In addition to the sound you can hear, The direction of the source, more particularly, is that you can feel the “distance and nearness” instead of simply changing the size of the sound. This sound imaging with relative position can only be displayed more clearly through open earphones such as ATH-GDL3.

In addition to external sounds entering ATH-GDL3, the sounds in the game will also be transmitted through the open structure. Therefore, in public or shared dormitories, you should also consider whether it will interfere with others. 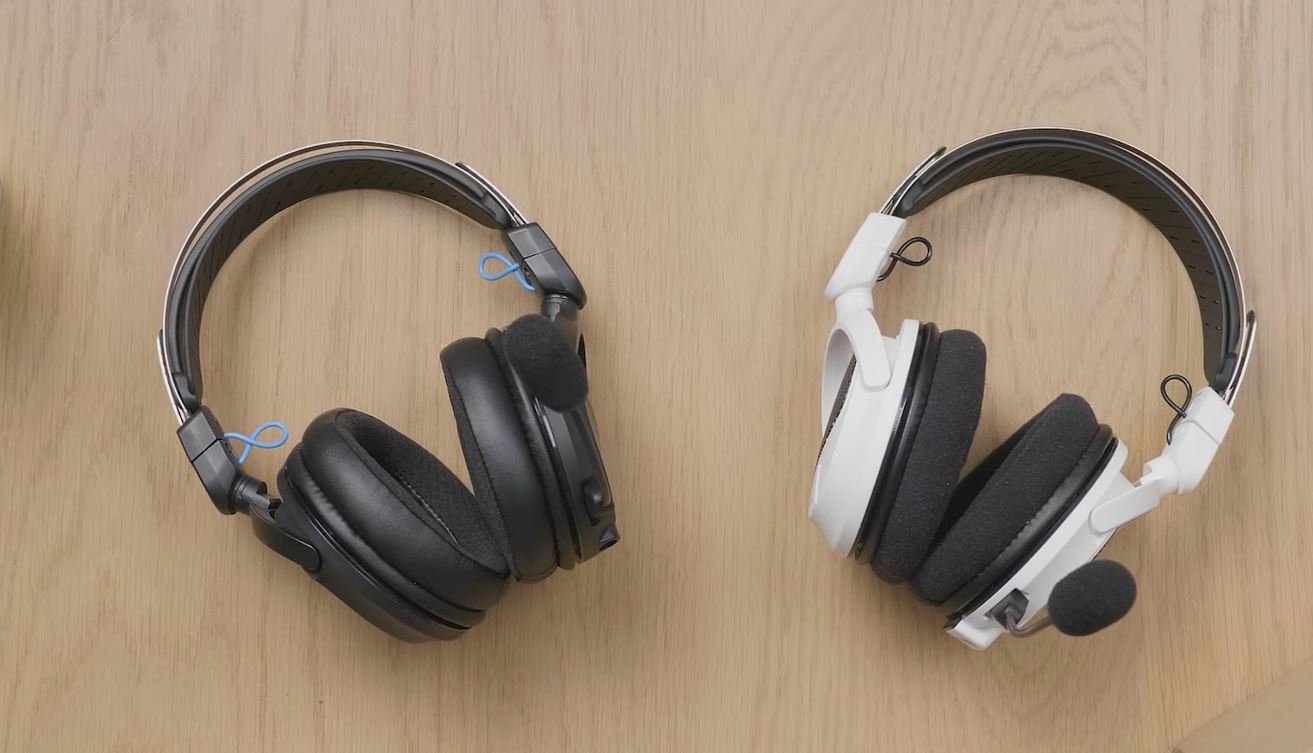 The lightweight headphone design that does not cause a sense of pressure can allow players to focus more on the game.

In addition, instead of using the wire control method, the control interface is directly built on the earmuffs. Audio-Technica is also a small ingenuity for the user experience, which can avoid the collision noise caused by the shaking of the wire control, plus the buttons. Simple, no complicated functions such as power button, wireless pairing, or noise reduction are required, and it is very intuitive to use. It is a pity that the earmuffs of ATH-GDL3 and ATH-GL3 do not support horizontal flipping. If carried out, they may take up more backpack space when storing.

The earmuffs cannot be flipped and stored. Although the weight is extremely light, the portability is still somewhat limited.

Both ATH-GDL3 and ATH-GL3 adopt a wired design, do not have wireless transmission functions, and do not support USB digital audio. They can only be connected to various game platforms through a 3.5mm analog interface. The use is quite simple, but it is, therefore, more comprehensive Supportability, including desktops, laptops, mobile phones, tablets, home game consoles such as PS5 / PS4, Xbox Series X/S, Nintendo Switch are applicable, do not worry about the compatibility of wireless specifications (such as Xbox Wireless), but also Avoid delay problems caused by wireless transmission.

Due to the wired design, ATH-GDL3 and ATH-GL3 can almost be applied to various game platforms. Surprisingly, the ATH-GDL3 and ATH-GL3 boxes are equipped with two independent audio source cables instead of one adapter, which corresponds to the computer’s 3-pole 3.5mm headphone/microphone separation cable, which is long Up to 3 meters, even if the computer host is placed under the desktop, there is sufficient cable length to facilitate movement; another 4-pole 3.5mm audio source cable can correspond to single-hole devices such as game handles, Switch consoles and mobile devices, etc. The 1.2-meter cable length fits the distance of hand-held operation.

ATH-GDL3 and ATH-GL3 also have a special feature in the wire specifications. The wire and earphone interface uses a very rare 4.4mm 5-pole plug. The purpose of this is to give the microphone and earphone separate Grounding, thereby reducing the possible mutual interference between the two; this is another design that is rarely seen on most gaming headsets. From this small detail, we again see Audio-Technica’s core concept of sound quality.

The plugs on the audio source wires are all gold-plated, and the corresponding microphones or earphones also have clear illustrations.

The condenser microphone is also the same for both earphones. It adopts a cardioid direction to receive the sound, and it can suppress the noise from the rear and the side, and the sound quality is good.

Remove the sponge windshield; you can see that the microphone is also printed with the Audio-Technica trademark, which is full of details.

ATH-GDL3 and ATH-GL3 are competent even for video conferencing and remote teaching purposes.

Although the sound orientations of ATH-GDL3 and ATH-GL3 are different, there is no question of which one is better. Audio-Technica provides players with various choices to match their game listening preferences. On the other hand, Audio-Technica uses excellent process design, starting from lightweight and intuitive, to minimize the oppression and interference during gaming. Today, when the functions of gaming headsets are becoming more and more complicated, this kind of not drifting with the flow and simplifying. Product thinking can better reflect the original intention of product design.