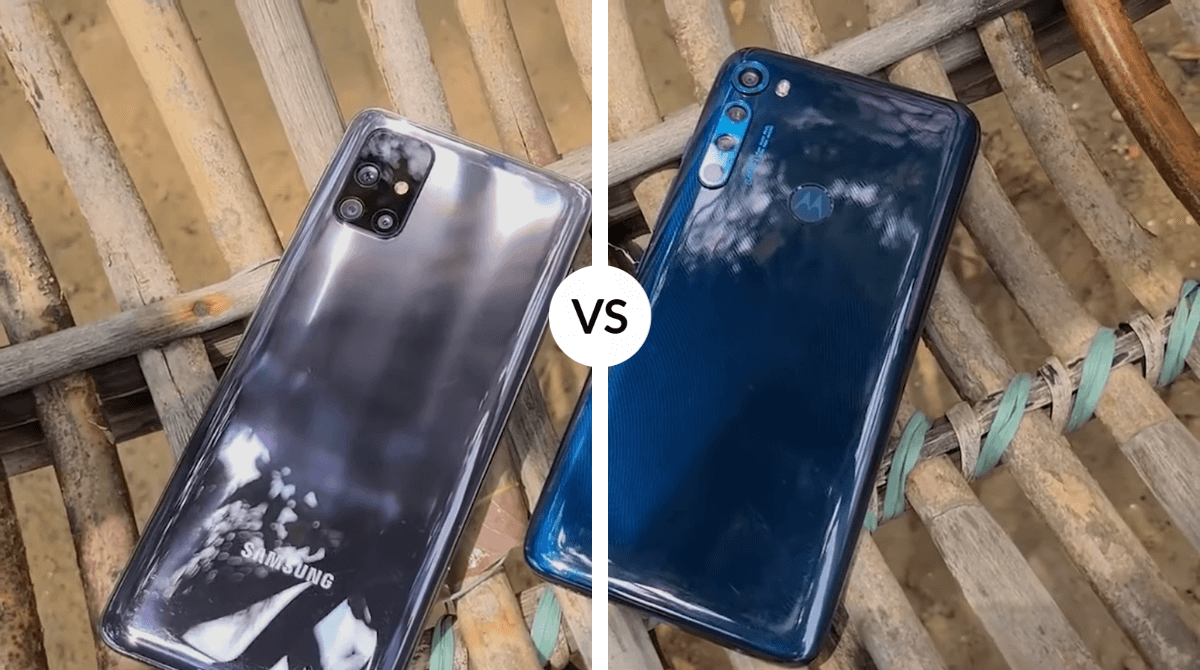 Hey everyone you’re at Top2Gadget we compare the best products to help you to choose the device which is best suited for your choices. Today we will look at a close fight between two entry-level Android smartphones. In this article, we will compare Samsung Galaxy M31s and Moto One Fusion Plus to know which one is better for your choices. 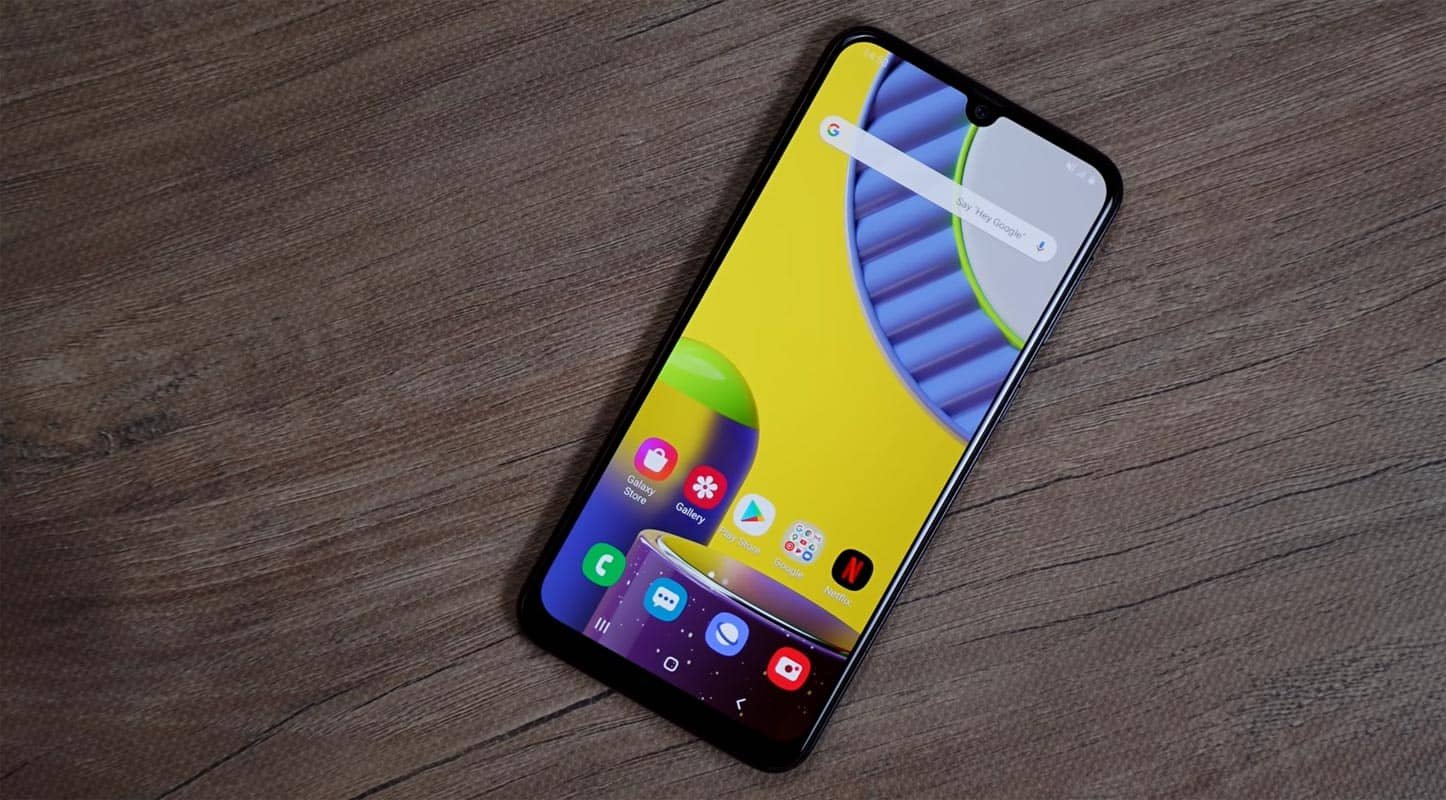 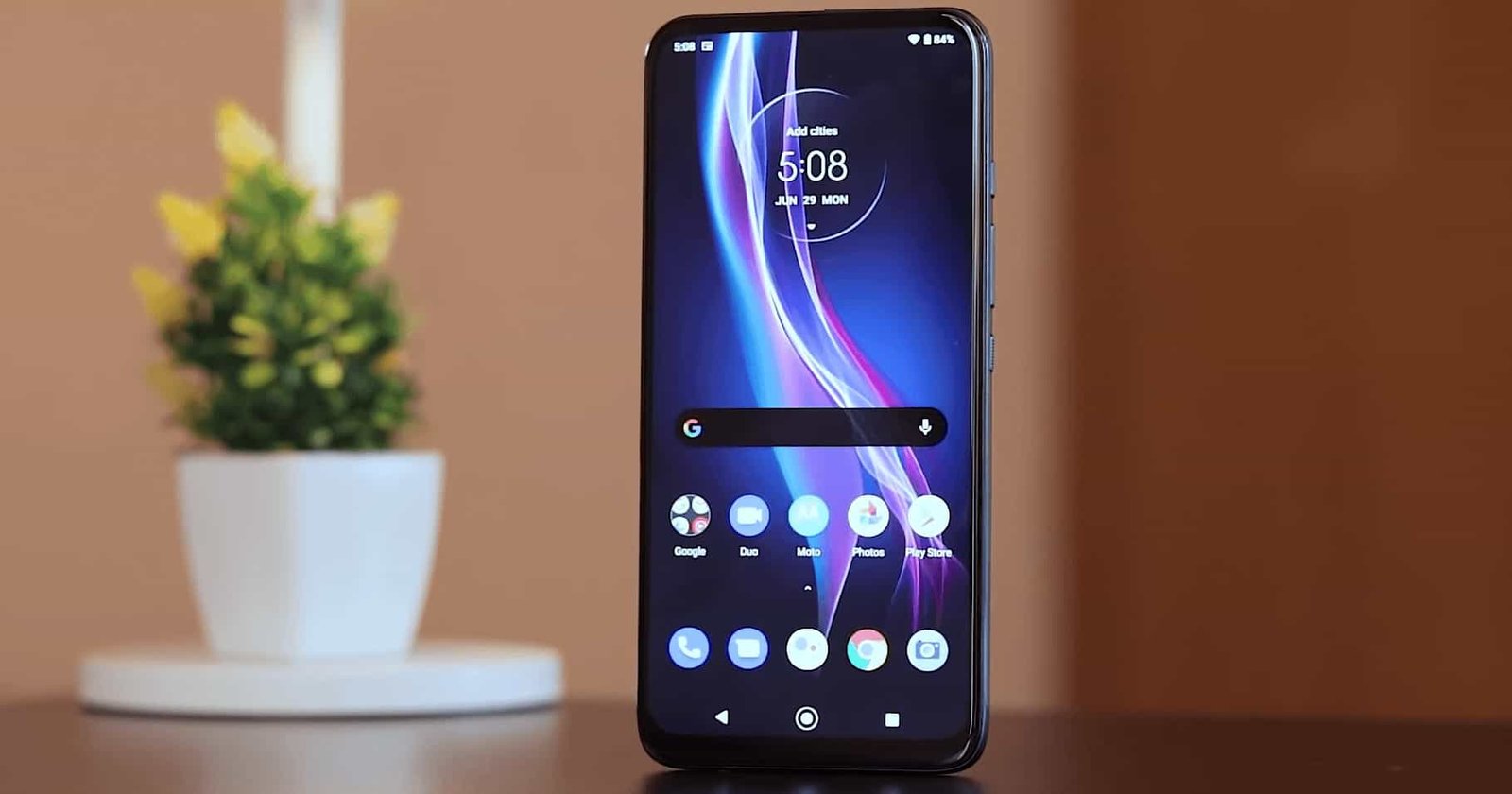 When it comes to the design of both of these smartphones draw a lot of parallels. Firstly both these phones have been constructed in tidy plastic so you do miss out on a premium build. Here that being said you will like the design of the motive on Fusion Plus a little more simply because it manages to stand out thanks to its gradient finish and unique camera module. Now it’s not every day you see a split between the main camera and the auxiliary sensors furthermore if you manage to get your hands on the white color variant then you will have quite possibly the most unique color at this price range.

Now coming to the Samsung Galaxy M31 the smartphone’s monochromatic hues don’t do it any favor and you could easily mistake the smartphone for any budget Samsung smartphone. Now that being said the handset is more manageable to use with just one hand as it weighs almost 20 grams less compared to Motorola’s offering and tips the scale at just 191 grams. It also comes with a dedicated micro SD card slot so you can put in two SIM cards and expand the storage on the phone unlike the one fusion plus which offers only a hybrid SIM tray. And we think many people’s favorite feature will be the camera bump is almost non-existent on the phone so you can use it even when it’s laid flat on a table. Now that said the one fusion plus offers the best haptic feedback in its price segment and after revisiting the M31 my opinion hasn’t changed. It also offers a pop-up selfie camera which is a better conversation starter along with a dedicated google assistant key.

So, on the whole, we feel that the One Fusion Plus offers a little more charge in the design department. Whereas the Galaxy M31 goes for a more utilitarian approach but with that being said. Let’s talk about the biometrics and sensors now both the phones we have here today offer a revered mounted capacitive fingerprint sensor which was faster on the One Fusion Plus. Now we don’t know what it is about Samsung’s fingerprint sensors but they always tend to be a little slow that said, unlike the one fusion plus. The M31 does offer facial recognition which again isn’t the fastest. 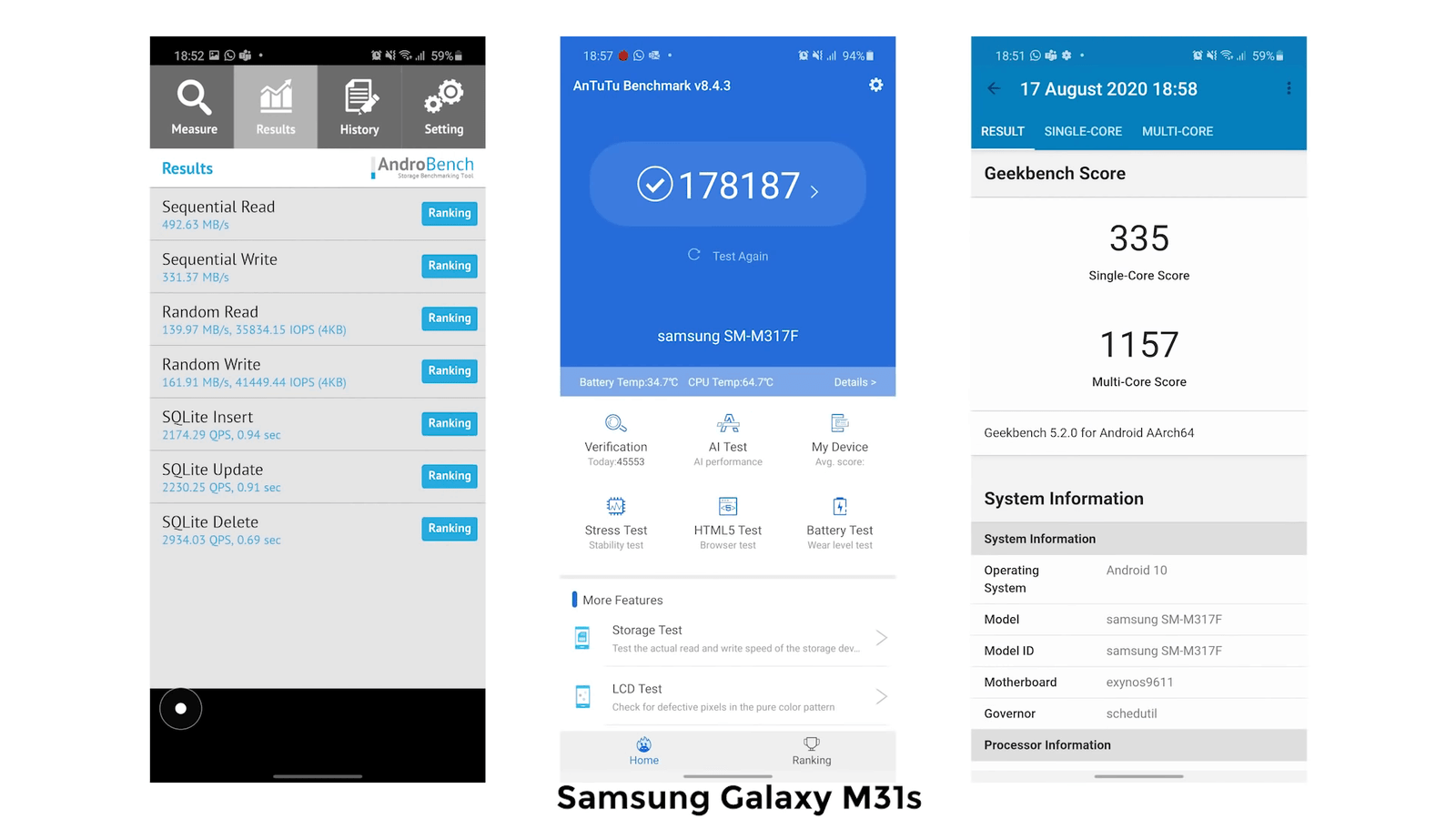 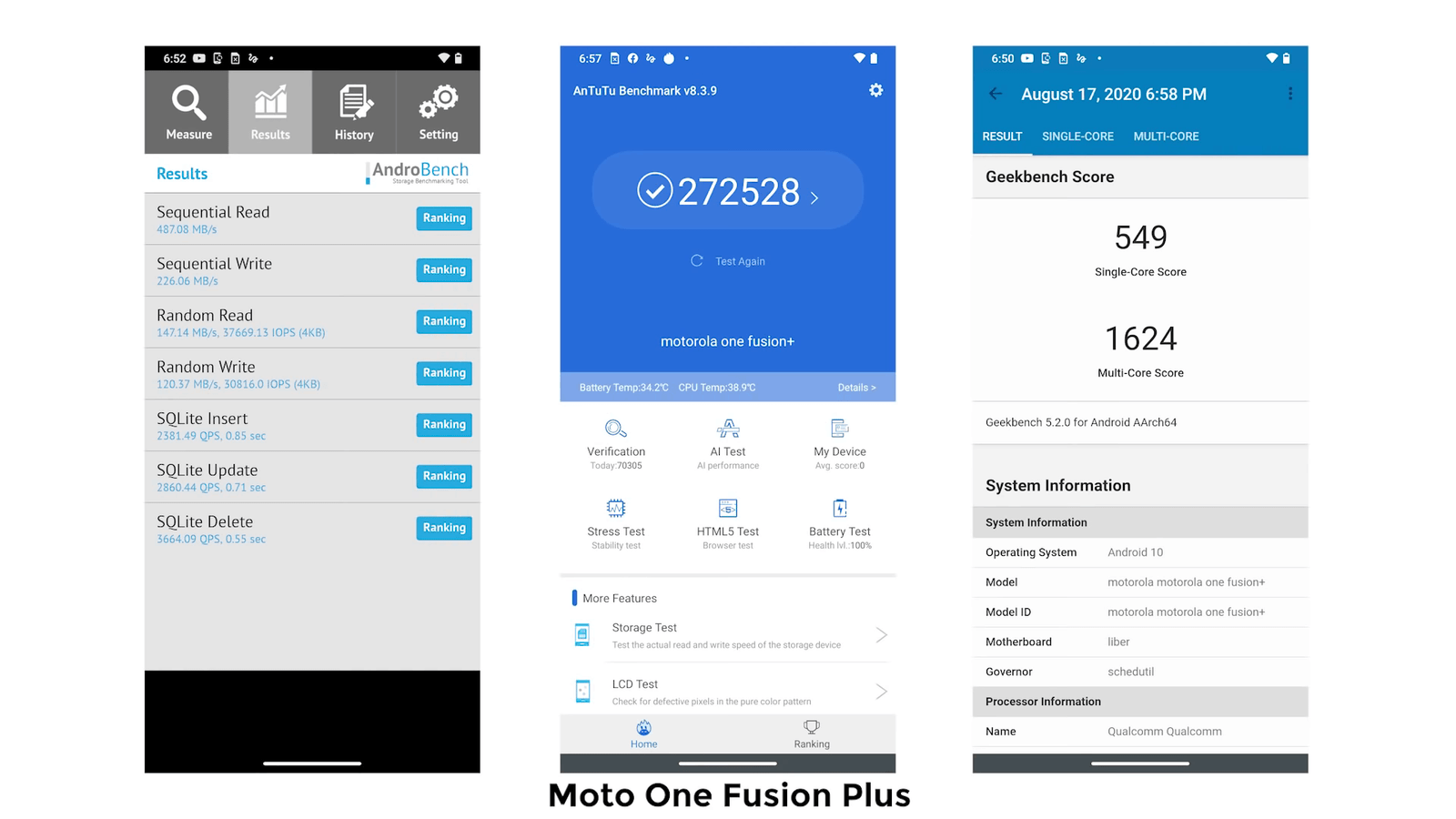 Let’s see how they differ in terms of performance. Now in terms of core specifications, the Samsung Galaxy M31 is powered by the company’s in-house built Exynos 9611 processor and the phone is available in three different SKUs of 6 GB and 64 GB storage, 6 GB RAM, and 128 GB storage. The Motorola One Fusion+ is coupled both with a Snapdragon 730 and 730G depending upon the variant, hence the chipset remains more or less about the same level, though it carries simply a 6 GB of RAM. The SoC located with the Samsung Galaxy M31 is mediocre in terms of performance than the Snapdragon 720G and 730, so it suffers in the gaming and heavy usage comparison. But during daily usage M31 performance is good. With both these phones, you get Android 10 but it comes with a customized UI.

Both of these devices come with the identical 64 MP Quad Rear Camera setup. Samsung Galaxy M31s will be a better choice if you’re a fan of click many selfies because it gets a more reliable 32 MP Front Camera while the comparison to Motorola One Fusion Plus’s only gets a 16 MP Front Camera. But in terms of rear camera performance there also the Smasungs camera set up does a good job than the Motos camera.

Talking about the sound quality output the Motorola One Fusion Plus and Galaxy M31 comes with the Dolby Atmos Sound. This gives both smartphones a particularly rich and superior audio quality. Now both get music lovers’ favorite 3.5mm headphones jack.

Talking about the battery life start with the Samsung Galaxy M31 you will get a huge 6000 mAh battery that lasts for fully two days with normal use which is claimed by Samsung. On the other hand, One Fusion Plus gets a compact 5000 mAh battery than the M31 which according to Motorola lasts long for two days with internet surfing and gaming.

Talking about the connectivity you will get 4G support with both of these devices also you will get a dual SIM card slot including dual 4G support which is great. Talking about the Bluetooth connectivity both gets a Bluetooth version 5.0 which gives both devices a solid and stable Bluetooth connectivity range of 10m. Coming to the sensors the biggest omission on the One Fusion Plus is that the smartphone doesn’t offer a magnetometer which means you won’t get orientation support on your phone. Now the contrary the M31 does come with the sensor so if you use Google Maps a lot this could be a deal-breaker for you.

Look both devices are served in the market around the same price range and have very good features and durable built quality. But in terms of battery life and camera quality, the Galaxy M31 is surpassed the One Fusion Plus. Though in terms of performance the One Fusion Plus is better than the Galaxy M31. But when we talk about the overall package and value for money scenario we suggest that you should go for the Samsung Galaxy M31 to get an overall better product.