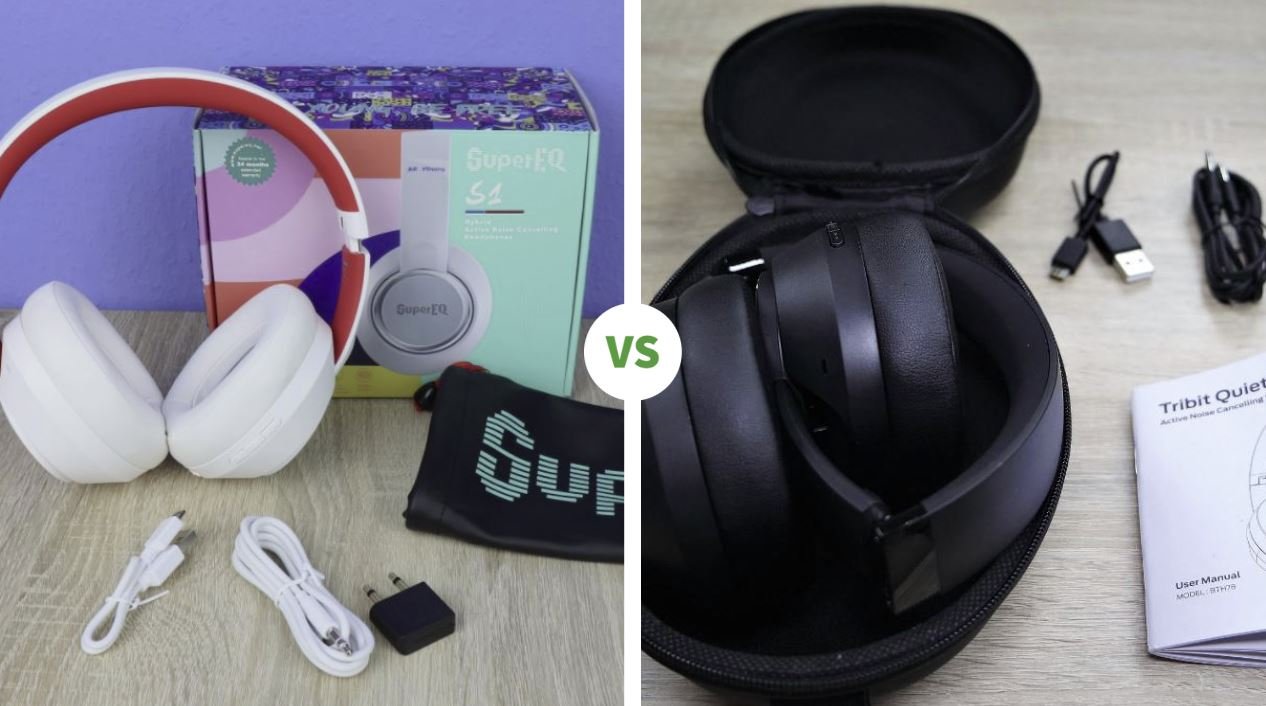 With the S1 active noise-canceling headphones, SuperEQ is taking a young and stylish approach. The SuperEQ S1 should move away from dull black and white and accommodate a little more color variants and alternative designs, of course, without neglecting the sound.

The Chinese manufacturer Tribit, which is not so well known, sells numerous Bluetooth audio products. Including the brand new QuietPlus 78 headphones with ANC function.

Lest compare SuperEQ S1 vs Tribit QuietPlus 78 both are noise-canceling headphones. Does it work out?

SuperEQ S1- Before you can use the SuperEQ S1, you first have to connect it to a device of your choice. For this purpose, are Bluetooth and AUX ports available? The former is activated by holding down the power button, after which the device can be paired.

The battery in the SuperEQ S1 is relatively narrow for a wireless over-ear. SuperEQ specifies itself as 380 mAh. The Chinese say 45 hours at 60% volume. Courageously deviating from the usual 50%. 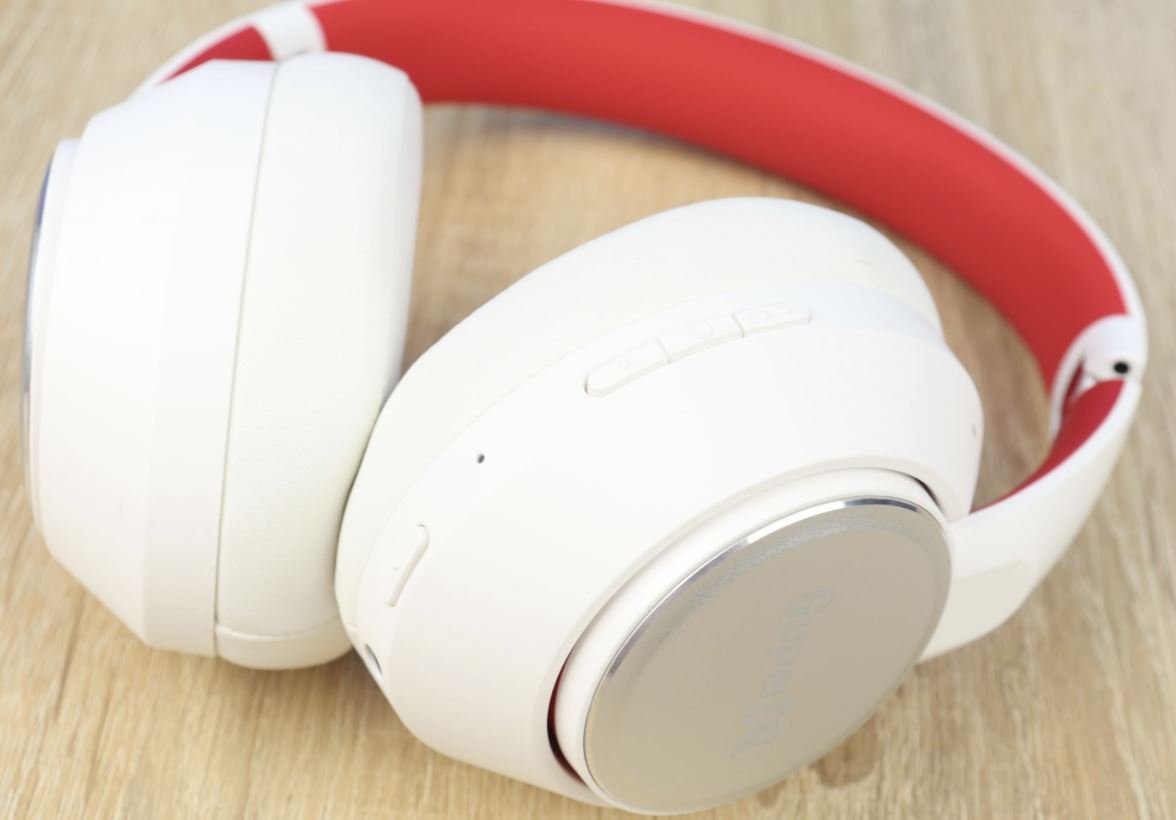 Tribit QuietPlus 78- There are three buttons next to each other; the upper and lower buttons increase and decrease the volume. If this is held longer, the next track is played, or the previous track is repeated. The middle button is used to switch the headphones on/off, search for the Bluetooth device, and press to pause or take a call. For Apple users, a double press activates Siri.

Two 40 millimeter drivers are responsible for playback. The frequency range covers 20 Hz to 20 kHz. The impedance is 32 ohms.

The headphones can be used either with a jack cable or Bluetooth (5.0). The coupling with the smartphone or tablet works quickly and smoothly even without NFC support. The maximum wireless range is just under ten meters.

A pleasant voice indicates the current battery status when the audio product is switched on. The built-in battery offers up to 30 hours of runtime at 50 percent volume. The charging time is just under 3 hours.

It is operated directly on the left headphones: on/off switch, volume control, and ANC function on / off. 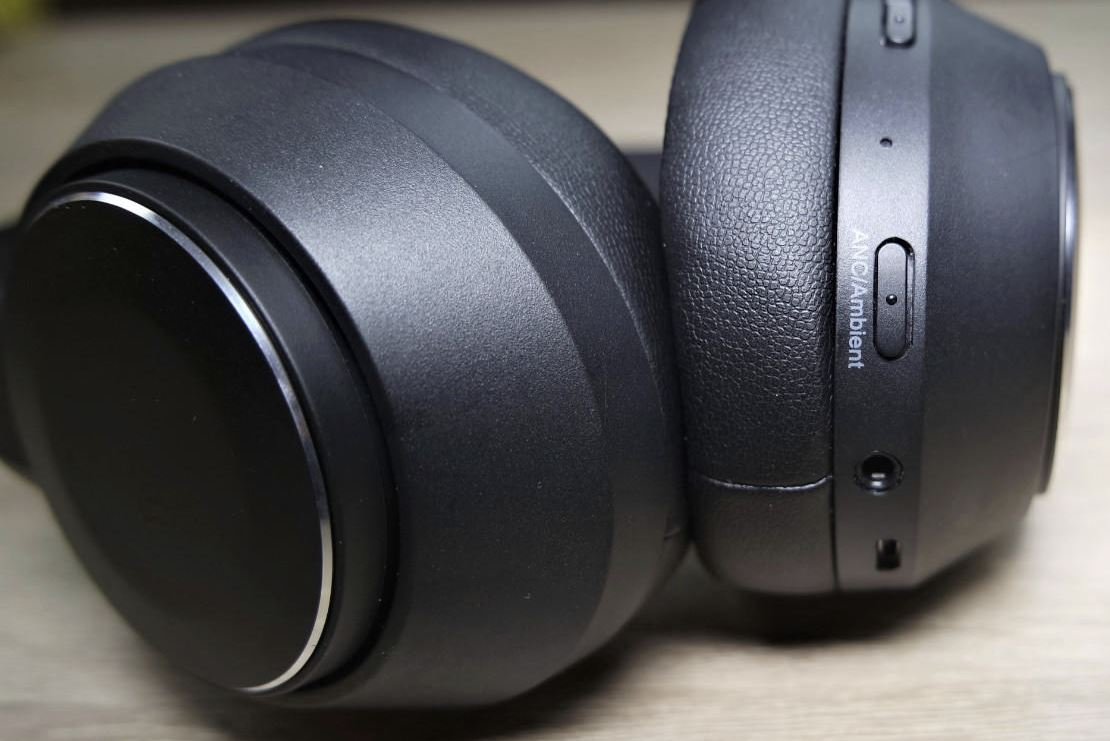 SuperEQ has three different over-ears and a TWS in-ear on offer. All with ANC and significant visual differences. At least for the eyes, that makes you want more. Our model is the SuperEQ S1 in white and red.

Without a doubt, the headphones look chic. Despite the young company, the quality of the headset is impressive, but a few small tricks are also used to avoid major blunders. The padding for the crown of the head, for example, is not made of synthetic leather but thick rubber. There is no other foam underneath.

Most of the rest of the headphones are made of plastic. Only the bracket rail and the outside of the driver housing are clad with aluminum. The rail can be adjusted in 10 steps and pulled out a maximum of 3 cm. In addition, the side panels can be folded in so that the headphones fit in the carrying case.

The Tribit QuietPlus 78 is only available with a black coating, robust plastic and weighs just under 270 grams. The quality is good: all parts are in their places, nothing rattles or protrudes. As with the adjustable headband, soft synthetic leather padding is also used on the ear cups, making the headphones comfortable to wear. The foldable construction of the QuietPlus 78 makes it easy to transport in the supplied hard case.

There is also a slight scratching when moving the ear cups, but it was not noticed in any way when wearing the headphones. The control buttons are not perfectly aligned. But you get a lot for the price of just under $70, so in our opinion, you can accept these minor problems. 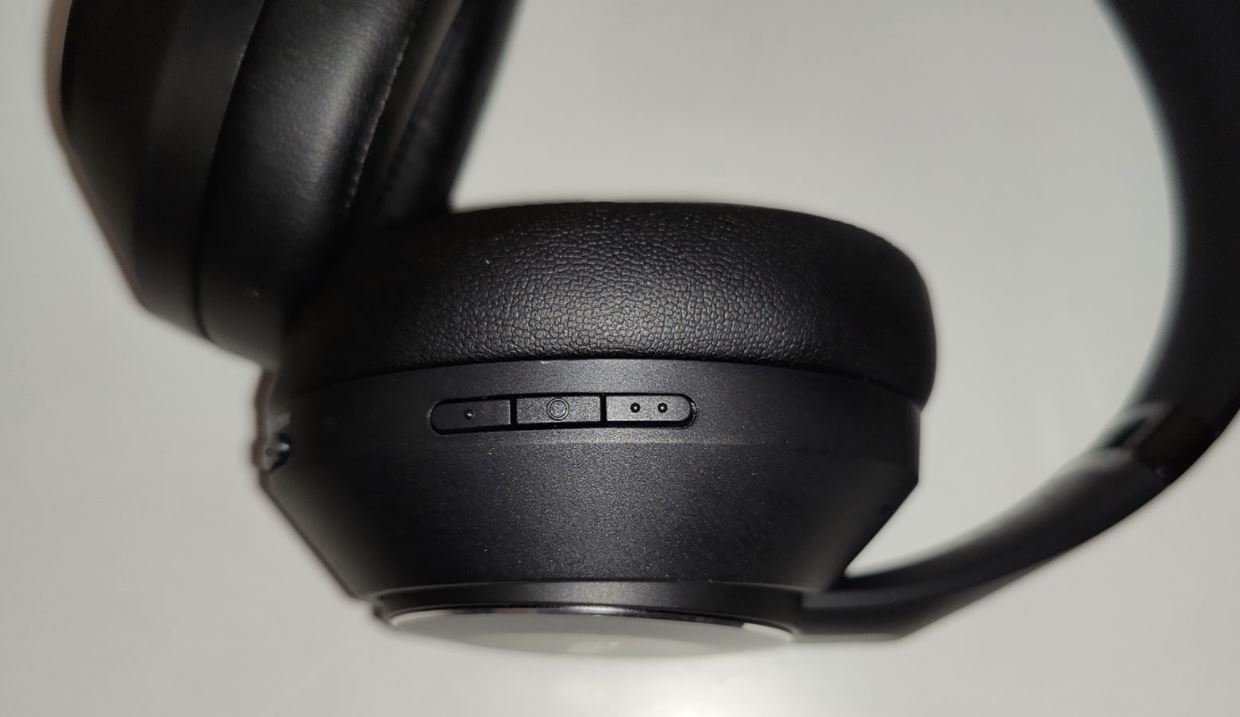 The SuperEQ S1 is standard over-ear headphones. This means that the parting receives a large part of the weight and distributes it as effectively as possible. In the case of the SuperEQ S1, this works quite well. The rubber is more comfortable to wear than expected, and the headphones sit tight.

The earpads themselves are also pleasant. Synthetic leather and foam give way enough to avoid pressure. The cutout for the ears should have been a little more oversized. At 5.5 x 4 cm, my spoons only barely fit into it. You are in the upper midfield at 210 grams when it comes to weight. Short sessions have no problem, but you will notice the weight with more extended use. There is no IP rating or any other advertised protection. 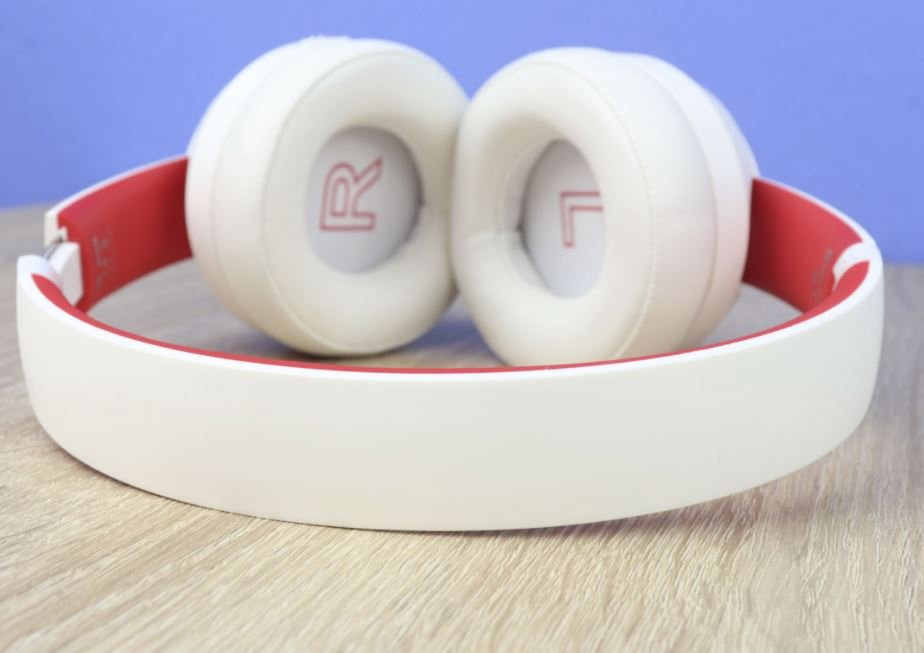 Tribit QuietPlus 78- The ear cups are covered with very soft synthetic leather, and the filling nestles very well. The weight of 220 g on your head is quickly forgotten, and you can cope with everyday life with them. However, it would help if you considered other headphones for sporting activities such as jogging, but rowing or dumbbell training, for example, is possible.

The QuietPlus 78 gets another plus point for the adjustable headband, underlining comfort. Slight downer: the leather cover quickly makes your ears sweaty. 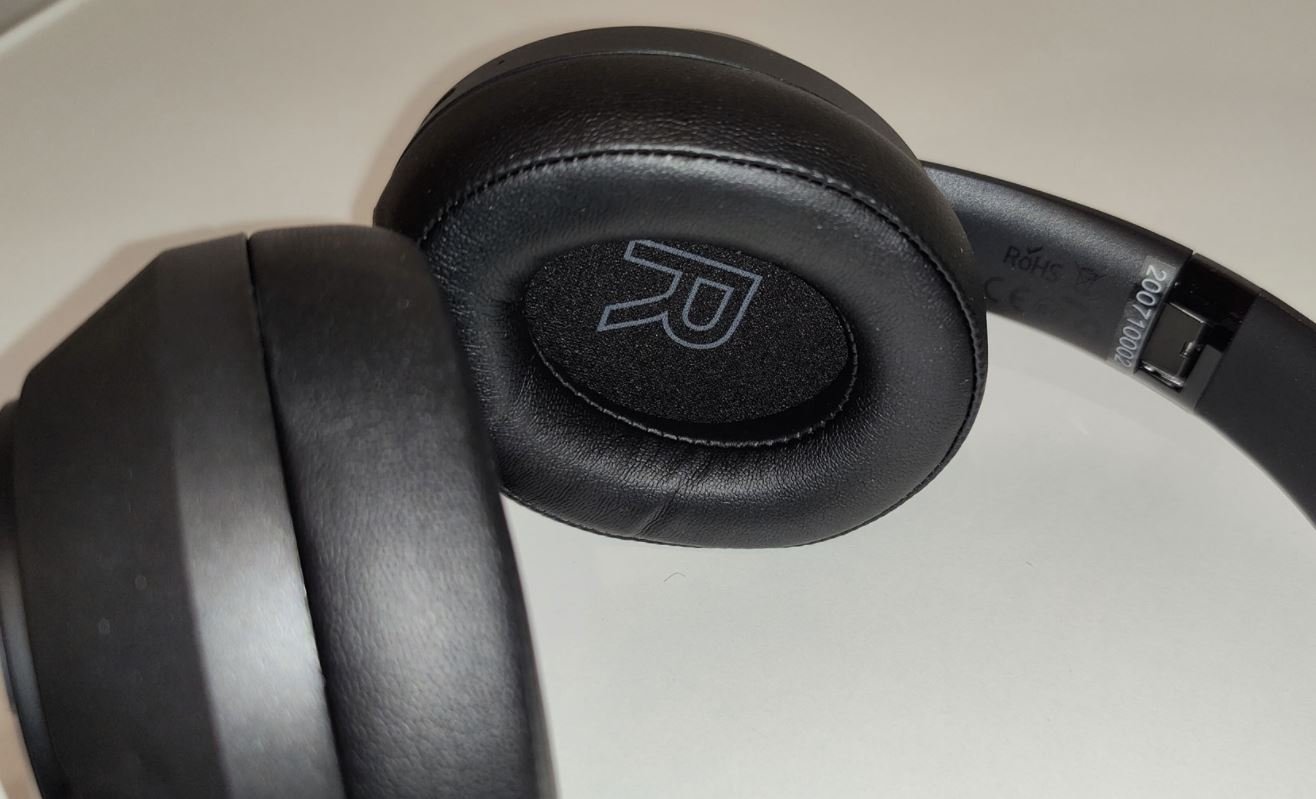 With 40 mm drivers, the SuperEQ S1 is within the norm for most over-ears. Version 5.0 is used for the Bluetooth connection. The RMS should be 20 mW. With the codecs, you have to be content with AAC and SBC. Of course, we shouldn’t forget ANC at this point, to which there is the possibility to connect an aux cable, only charging is possible via USB. So do you still get the promise of design and sound? We’ll clarify that in a moment.

Let’s start with the positive aspects. The SuperEQ S1 impresses with bass and bass. SuperEQ’s over-ears shine in bass-heavy scenarios or with deeply tuned acoustic pieces. However, the higher the piece, the more the details become blurred, and the tips also fall short of expectations and do not develop the intended drama that accompanies them.

The transparency mode does it better because it does not influence the sound image or leave out ANC, although that should not be the point.

If you use the AUX connection, the sound image hardly changes. Overall, the vote remains the same. The connection via the cable is a bit quieter on the smartphone.

SuperEQ advertises four built-in microphones. Two of them are outside the driver housings near the headband. However, these are mainly responsible for ANC detection. The primary microphone is in the front on the right side.

Here it becomes clear that the SuperEQ S1 is not designed for long calls. Although ANC also works during the phone call, which makes it very quiet, the recording is more beneficial. It echoes, sounds tinny, and the voice is transmitted very monotonously. In addition, only a tiny amount of background noise is filtered out or attenuated sufficiently. Therefore, it is advisable to go to a quiet place when making phone calls and generally not to hold excessive conversations.

At least the range of the transmission is convincing. 20+ meters was possible in most situations. A floor or wall shouldn’t be a problem. 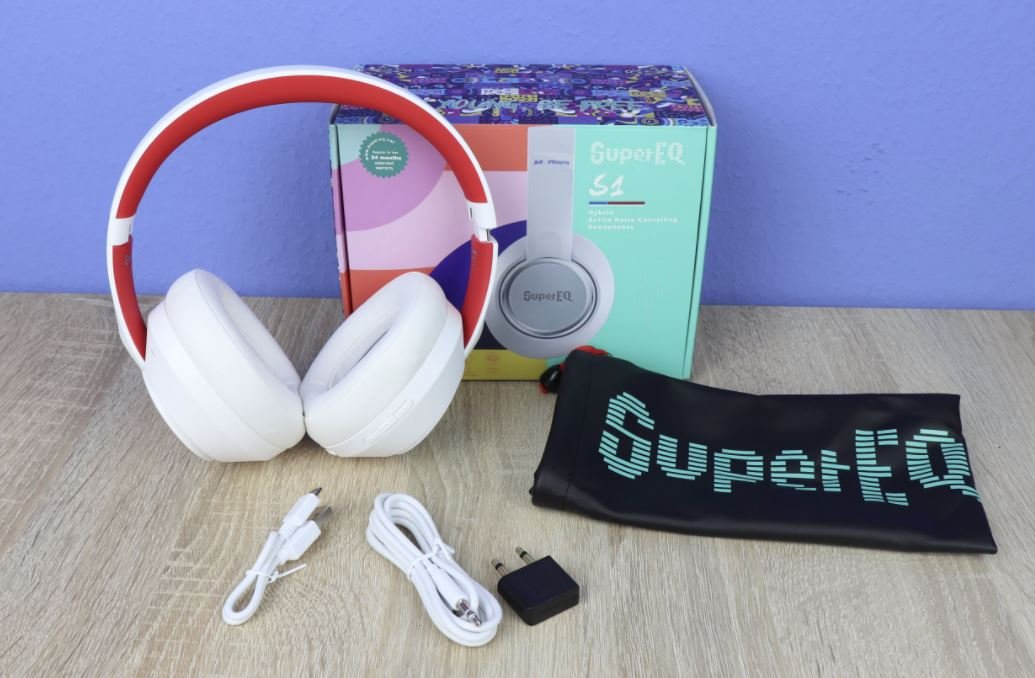 Tribit QuietPlus 78- We have decent 40 mm drivers here; these have a usable bass foundation, which is certainly not the great strength of the headphones. However, the voice reproduction and thus the mids are excellent. The highs are reproduced correctly without drifting into a clang.

We liked the playback of podcasts best here, as the voices were understandable. Even with films, the voices could always be perfectly understood without being drowned out by other soundtracks.

He can only play music when it goes to the extreme of bass addicts, such as Pink Floyd, and on top of that, at maximum volume, the drivers start to pump, and it sounds unclean. At 75% volume they catch up again, and such music can be played with a clear conscience without missing anything.

No hair is blow-dried when playing techno music, but the sound remains solid. The bass remains but could be crisper.

A few more descriptive words about the ANC technology of the QuietPlus 78: Ambient noises are recorded with microphones, then the headphones produce a kind of counter-sound. You can enjoy your music as undisturbed as possible; external noise, such as that inevitably arises on the plane or train, is reduced by up to 15 decibels. If the battery is empty or the noise suppression is deactivated by pressing a button, you can continue to use the headphones as usual. In this case, the outside noise is also attenuated, but only passively.

When playing the sound via the jack connection, there is only Noise Cancellation On or Off Here; the sound in On mode is slightly reduced in the bass range and, depending on the sound, can also sound a bit tinny.

However, it must be said that the noise cancellation cannot keep up with the top representatives ala Sony, but here too you have to see the price in relation, the ANC cuts a good figure. 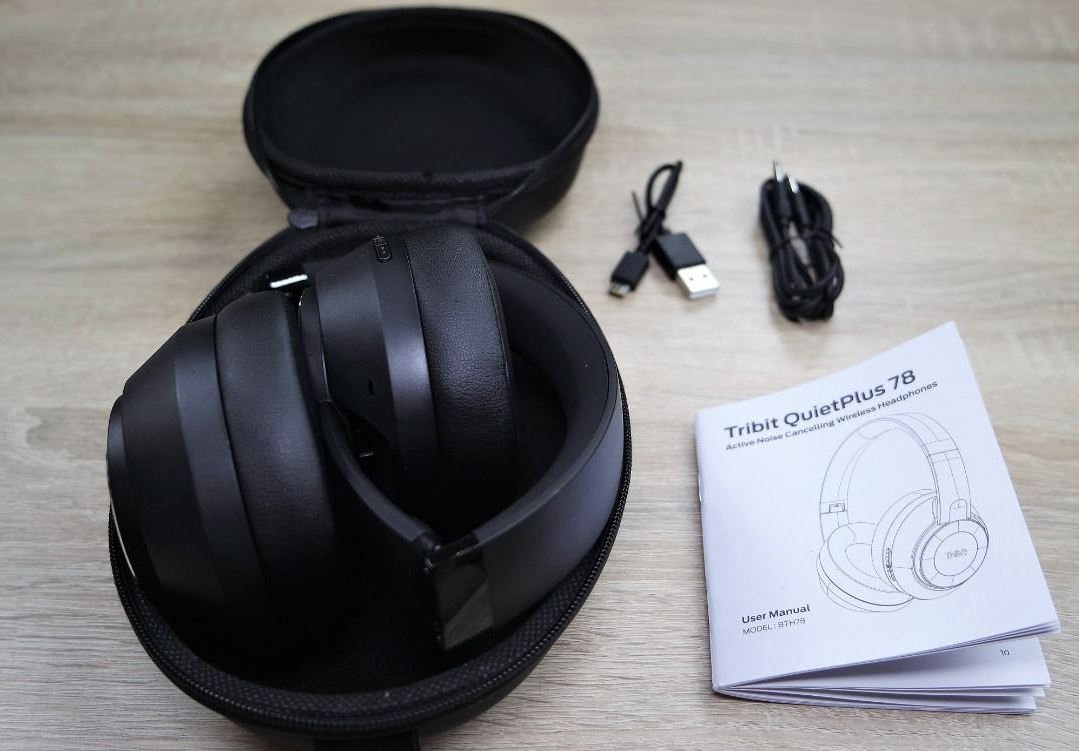 SuperEQ’s first over-ears are a roller coaster ride of impressions. Modern design meets strong bass and powerful lows but generally makes the sound. The controls for the headphones are varied, but the voice quality is poor. ANC is available for as little as $55 on the S1, but the implementation is not particularly successful. You do not have a unique selling point with this price point but are in a highly competitive territory.

The Tribit QuietPlus 78 are a decent debut with a slight weakness in the bass range, which only appears in extreme situations. Super comfort, quality corresponding to the price on a good but not outstanding level. Long battery life and usable ANC are good Bluetooth headphones for many situations. You will get an overall carefree package if you don’t always insist on 100% volume.

Of course, you shouldn’t expect hi-fi sound for just under 70 USD, but the sound quality is sufficient for the mobile saver/traveler. Only the short cables and the just “okay” microphone slightly spoil the overall impression.