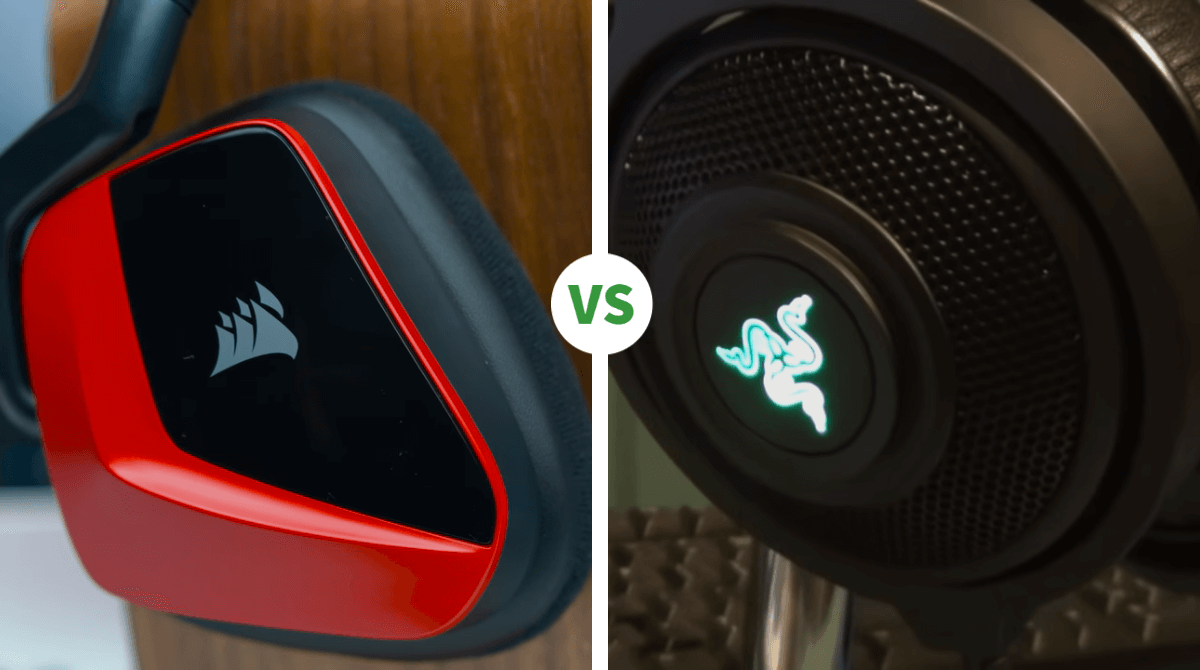 We are back again with another interesting comparison for you from the gaming headsets segment. Today we have two budget and famous gaming headsets present in the market. Here we have Corsair Gaming Void Surround Hybrid and Razer Kraken 7.1 Chroma V2, we will compare these two to know which one is really worth your consideration.

Today we’re looking at Corsair’s newest addition to their Void and lineup of headphones. This is the surround model priced at $79 retail. We also provided the link in this article so you can go on Amazon and you can click on the link. This is the pair of overhead gaming headset which comes with the wired connectivity. Despite coming with the wired connectivity these headsets are a little bit heavy. They are served in the market with only one color option which is black color.

The Razer Kraken 7.1 B 2 gaming headset is a headset that boasts some serious comfort, as well as really great sounding audio and you surely want to know to take a look at these things. These are again a pair of gaming headsets with the overhead design and comes with the wired connectivity. They are fairly light in weight and only come with a one-colour option which is black color.

The headband is all hard plastic with a decent amount of cushion for the crown of your head. It’s wrapped in microfiber fabric the ratcheting system works great offering very cliquey feedback and unlike some of the other cheap headsets that you have tried so far. The ratcheting system stays put and you won’t accidentally have these extend or retract during movement moving down to the ear cups. These do graciously swing exactly 90 degrees for a lay-flat stowing but still retains a decent footprint since the ear cups don’t fold inward. The foam earpads are removable if you ever need to replace them and inside you’ll see the single 50-millimetre driver that pumps out the audio.

The outside the air cups are a glossy black finish with Corsairs logo and with matte red accents all around. Now the left side has a mute button yet moving to the rear end nicely hidden is the volume adjustment scroll wheel. The mute button is responsive and gives nice subtle feedback but the wheel, on the other hand, felt a bit cheap scrolling barely had any resistance and it felt and sounded like lower quality parts when in use but the rest of the headset however does feel very well made.

Out of the box, you will immediately notice that this headset feels solid the 7.1 b-two has an aluminum frame that makes it sturdy which is great in the headset. Because really how often do we take our headsets off and on have them fall on the floor or any number of things that snag. The wire on the headset to have them come flying off so it’s good to have something that feels like it can take a beating to offset some of the ruggedness. The V2 comes with some serious padding the ear cups come with really thick memory foam pads that kept my large ears from touching the inside of the speakers. This is by far my most common complaint from a lot of headsets the headband is also fairly comfortable consisting of a lightly padded band wrapped in cloth.

There’s also a Razer logo embossed in the faux leather on the topside well we didn’t find the headband particularly unpleasant to where it does feel like it could use a little bit more padding especially with having that aluminium frame underneath. Razer says on their website that one of their ideas behind the design philosophy on this headset was to decrease fatigue from wearing the headset. Razer did succeed in eliminating a lot of the pressure points that would usually cause me to fatigue the 7.1 V2 is comfortable overall especially around the ears and the large memory foam cups don’t cause any discomfort when pressing on the frames. In terms of extras the Kraken 7.1 V 2 does have sixteen point eight million color RGB lighting in the Razer logo on the ear cups.

The mic is also well positioned with options of pivoting up and down and although made of some tough silicone or rubber-like material. The microphone end is adjustable for your needs and just a heads up the microphone with the audio cable that extends out of the headsets they’re not removable. However, they’re both well-built tuggings and pulling on them simulating accidental pulls and tugs and since the environment, my controls are on the headset itself.

There’s no inline controller which was perfectly fine the surround model is compatible with both PlayStation and Xbox. But only offers stereo separation via its 3.5-millimetre plug for the surround sound effect which is software-driven you would have to utilize the included USB download and download the Corsairs queue application with this application you can utilize Corsairs own equalizer to fine-tune your audio. Which works pretty well but nothing too drastic and also toggle Dolby surround sound on and off.

Talk about the buttons and inline controls but unfortunately there just aren’t any except for a simple mute button which is located on the tip of the microphone. It is indicated by a red LED everything else on the headset is controlled via Razer synapse which is just kind of a dumb move in our opinion. It just seems like a careless omission to not even include a simple volume scroll wheel. The ear cups do a great job at isolating you from your environment allowing you to immerse yourself.

If you have an Xbox One, a PlayStation 4, and a PC, this headset remains ideal to work beyond all. If you have just one of these, it remains further a piece of fabulous advice at its reasonable cost. This does an excellent entry-level or moderate headset concerning gamers of every operation and practice. This is an exceptional headset concerning versatility and fluidity, and this one cannot be underestimated.

The Razer Kraken Pro V2 remains a standard and firm gaming headset including an excellent microphone. The mic perfectly transcribes your call and filters out a set of environmental noise. They additionally have a nice sound that you can modify through the Razer Synapse software.