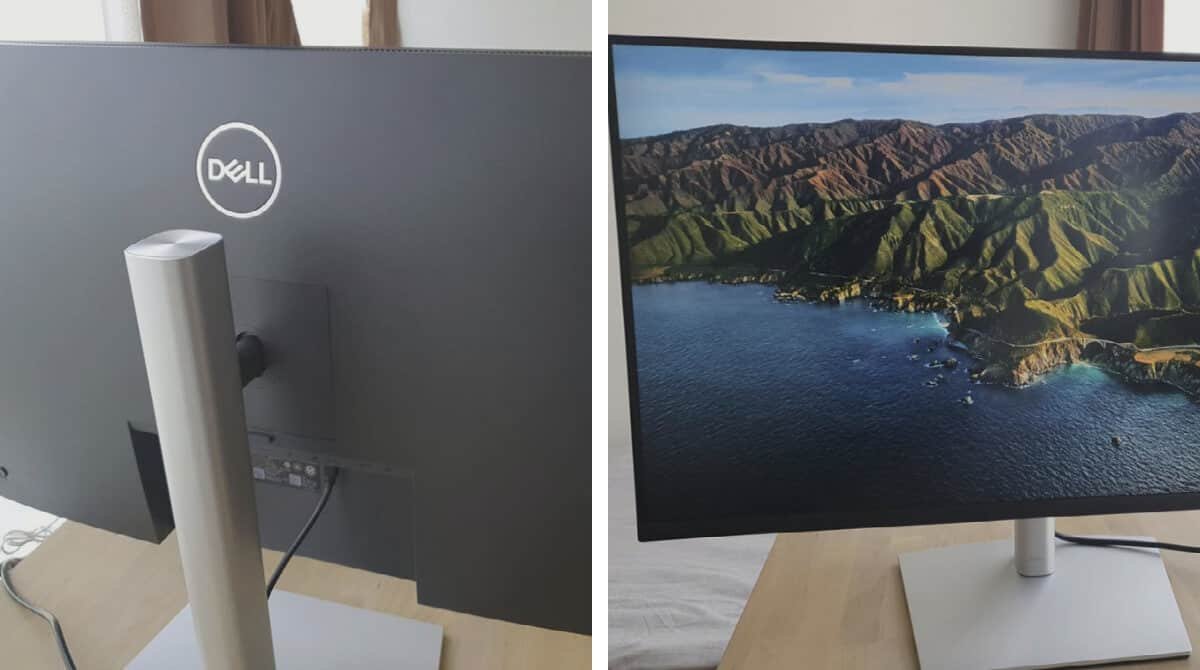 While most laptops are looking to reduce their port count for various reasons, our need for these ports has not changed. So, when you have a laptop PC that only has USB-C ports, and you want to connect a screen, an Ethernet cable and maybe even some peripherals, while recharging the said PC and not plugging in only one cable, one of the solutions that come our way is the USB-C or Thunderbolt dock. 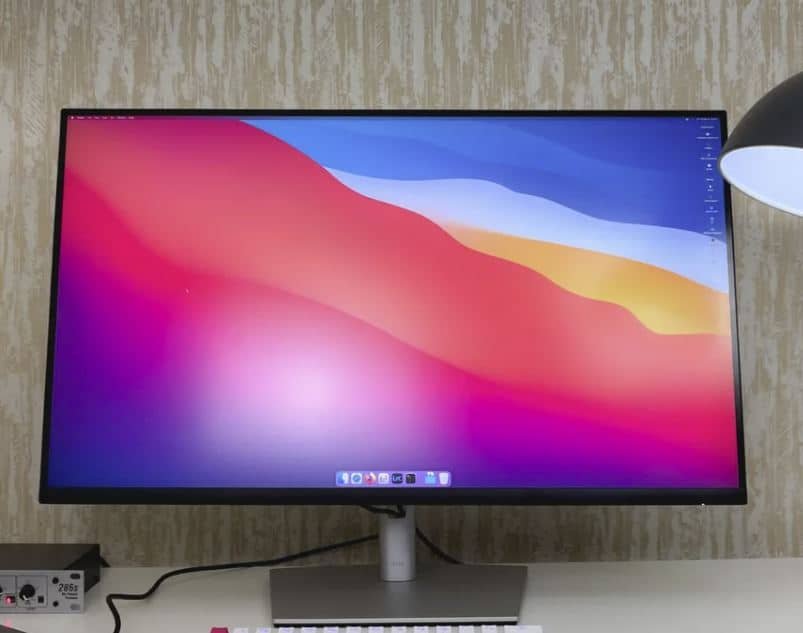 So, of course, technically, only one cable is connected to the computer, but the dock remains one more object on your desk, an object from which several cables leave rather challenging to arrange. We are far from the minimalist set-up that we see on the promotional materials of these laptops with four identical ports. That’s when the Dell P3222QE comes in, a display that will take you one step closer to your dreams of a tidy white desk. 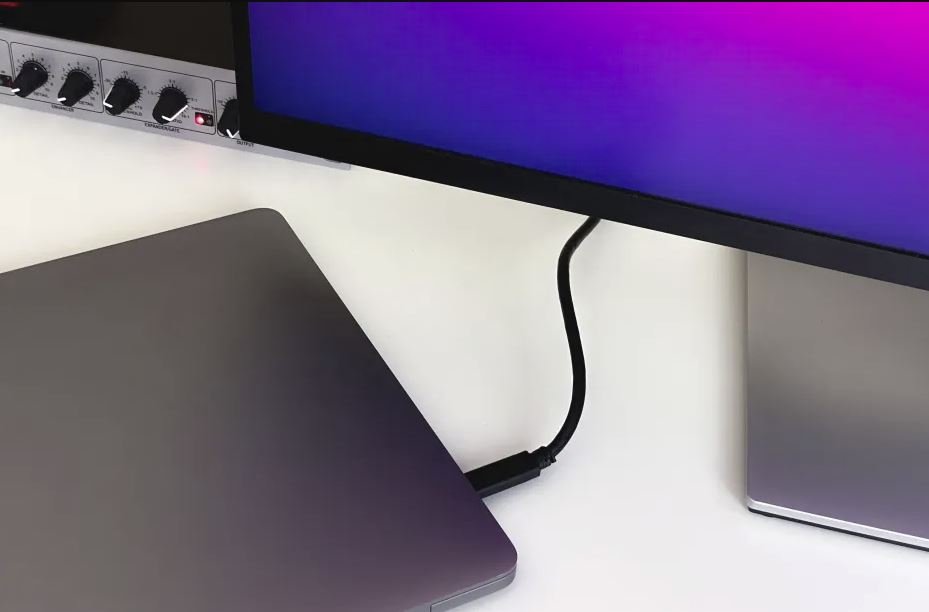 The screen is really designed to be used with more than one computer. When used to its full capacity, none of the cables supplied with the display is unnecessary. 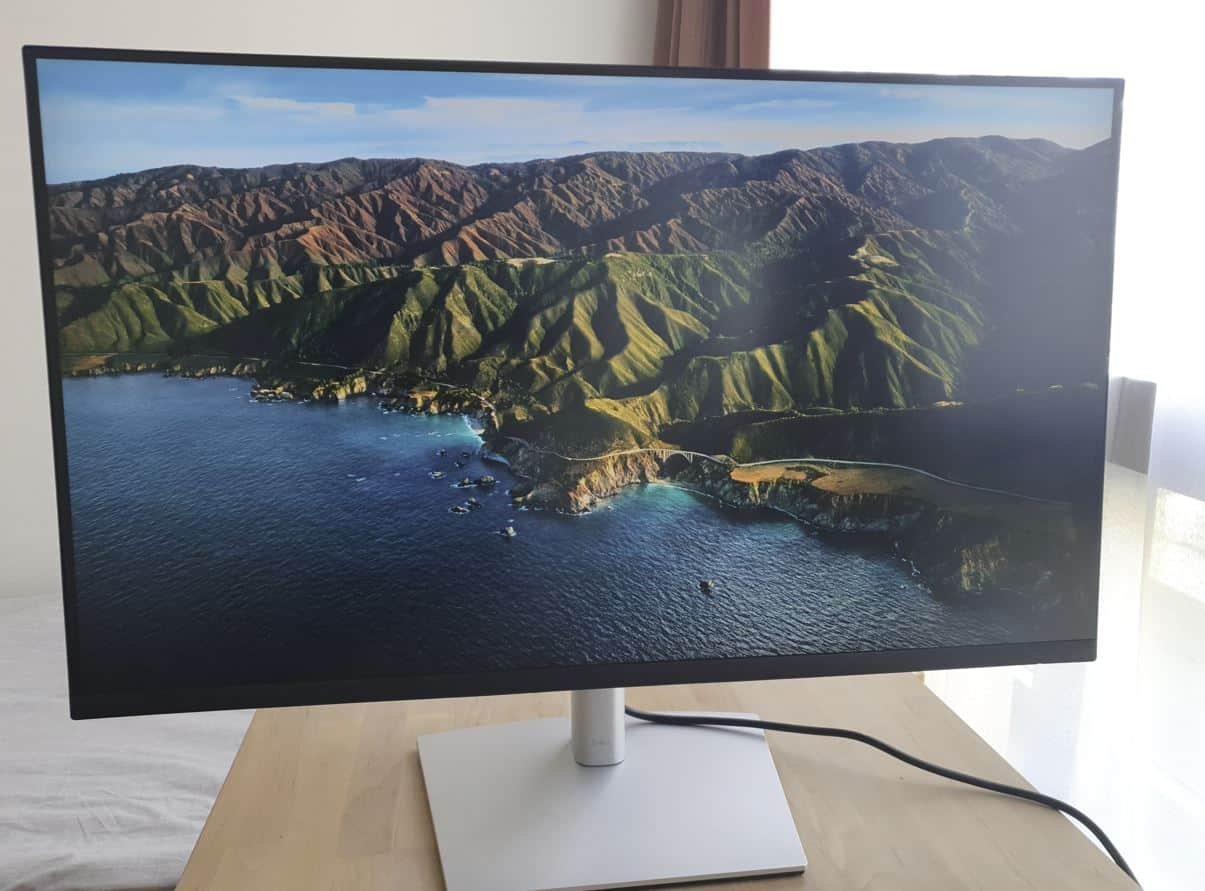 As for the screen itself, it seems huge when you see it for the first time. So much the better, at the same time, at least we are sure that none of the 32 ″ promised by the manufacturer is missing.

The panel is constructed entirely from matte black plastic of acceptable quality. The borders are pretty thin, with the bottom border sticking out to the front and made from that plastic mentioned earlier. Nothing interrupts the sober appearance of the front panel, not even a logo; only a small white LED indicating the status of the screen and which can be deactivated in the settings. 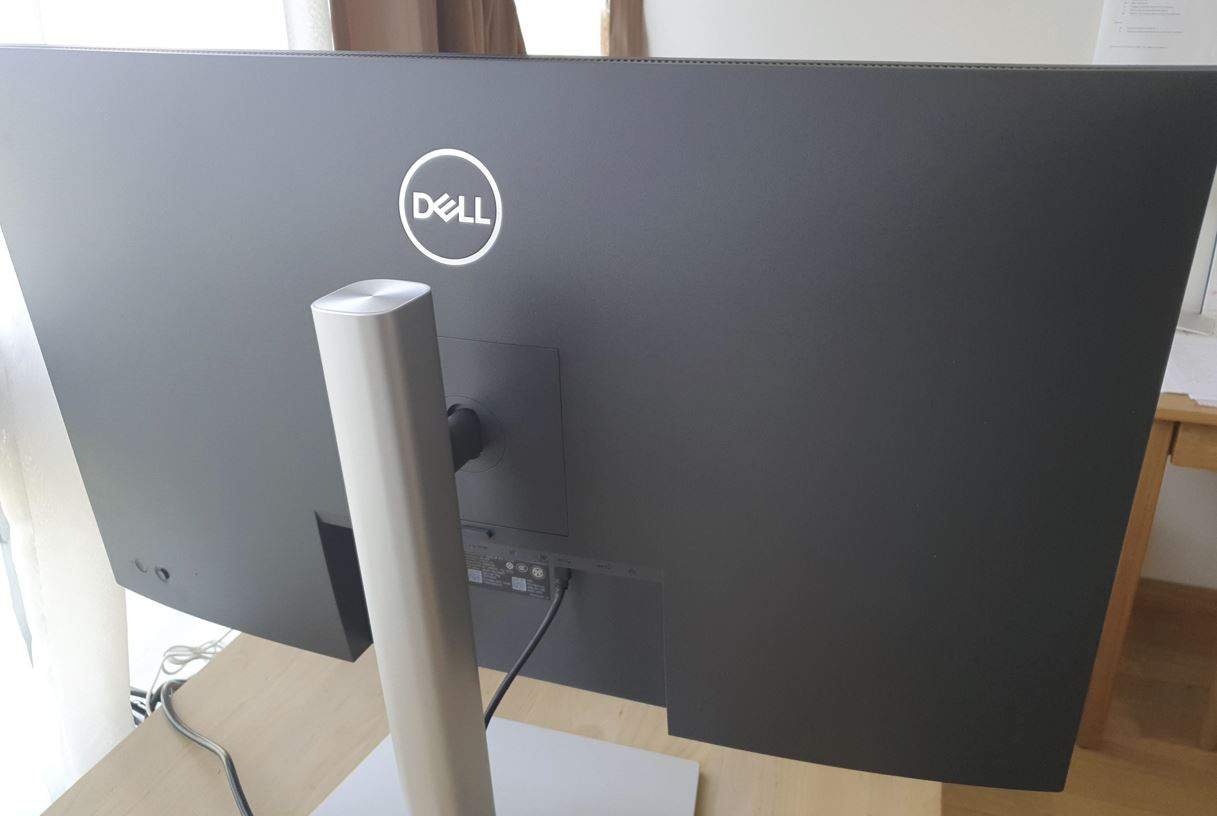 In reality, only two logos are present on the product, one on the back of the panel and one on foot. The latter is mainly made of grey plastic, with an aluminium base in the same colour. This stand has an adjustable height, including adjusting the screen high enough to be seen over a laptop.

The rotation is also adjustable, allowing the screen to be rotated in portrait mode in both directions. Finally, a hole is dug in the foot, which will allow you to run your cables more cleanly.

The Dell P3222QE is, a sober screen that will fit in more or less any set-up. It will also remain credible in a professional environment due to the absence of obvious branding and thanks to these very neutral colours.

The Dell P3222QE is very pleasant to use, no matter what size you are, thanks to the formidable stand with which the screen comes. 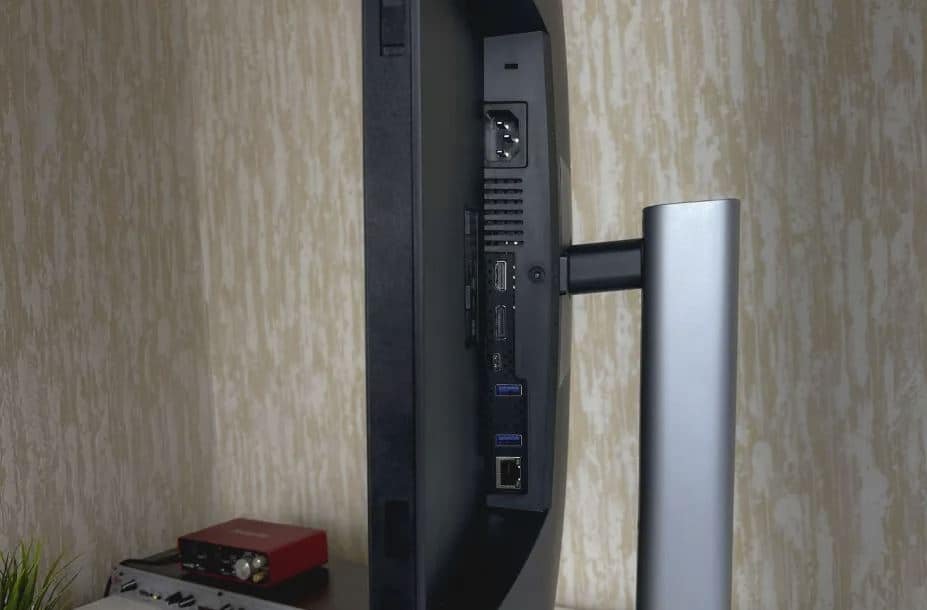 A height adjustment of 150mm, can adjust the panel to suit even taller people, who are usually forced to invest in a third-party stand to use a screen without having a sore back.

The rotation is 180 degrees, so it is possible to rotate the screen in both directions, allowing the ports to be positioned correctly. However, it lacks a small * click *, sound and tactile, to signify that the screen is back to degree 0.

Finally, it is possible to rotate the screen from left to right and from bottom to top, which allows you to position the screen ideally in any situation. As with the height, the range of these adjustments is huge.

We especially salute Dell for this stand, making life easier for those who normally have to use an often ugly third-party product to use a computer without having a sore back.

The P3222QE is simply a pleasure to use every day. On the one hand, the picture it produces is perfect, thanks to the 4K definition of this screen, but also due to its colour reproduction. So, yes, there are certifications for the colour more glorious than the 99% sRGB that the brand puts forward, but the colours are still perfect, especially for the price of this screen.

With its 350 nits of brightness, the screen remains quite usable in most situations, even when the shutters are wide open in bright sunlight.

The screen produces is quite versatile images, in the sense that it is good enough to do a lot of things like retouching photos, doing a bit of colourimetry for its videos and even gaming; however, if you are looking for a screen that excels particularly in one of these areas, the P3222QE may not be right for you.

The refresh rate and latency are surely the first things that will put off the bigger gamers. While 60Hz is still the standard on most screens and remains completely decent for casual gaming, 8ms in normal mode and 5ms in fast mode are still fairly slow response times, even compared to screen-centric displays.

That doesn’t mean the screen is unusable; if you’re not gaming or your most hardcore gaming experience is Minesweeper, you surely won’t feel the difference, but if even launching Valorant is on the agenda, we recommend that you turn to other options.

The screen size, 31.5 ″ is convenient in video editing work. Even with the 150% magnification of Windows, working on any software is fun. We sometimes go to 125% to display even more of the Premiere Pro timeline for maximum productivity.

By the way, even at 31.5 ″, the screen resolution is still higher than the ever-popular 1080p at 24 ″. Indeed, it would take a 48 ″ screen in 4K to obtain the same resolution as a 1080p 24 ″ screen, or 92ppi. Despite its size, this screen is therefore always sharper than the one you probably had previously.

The connection of the P3222QE is a fairly important point since, above all, this screen aims to make the dock an object of ancient times. And with all the connectivity that this screen has, Dell may have something. 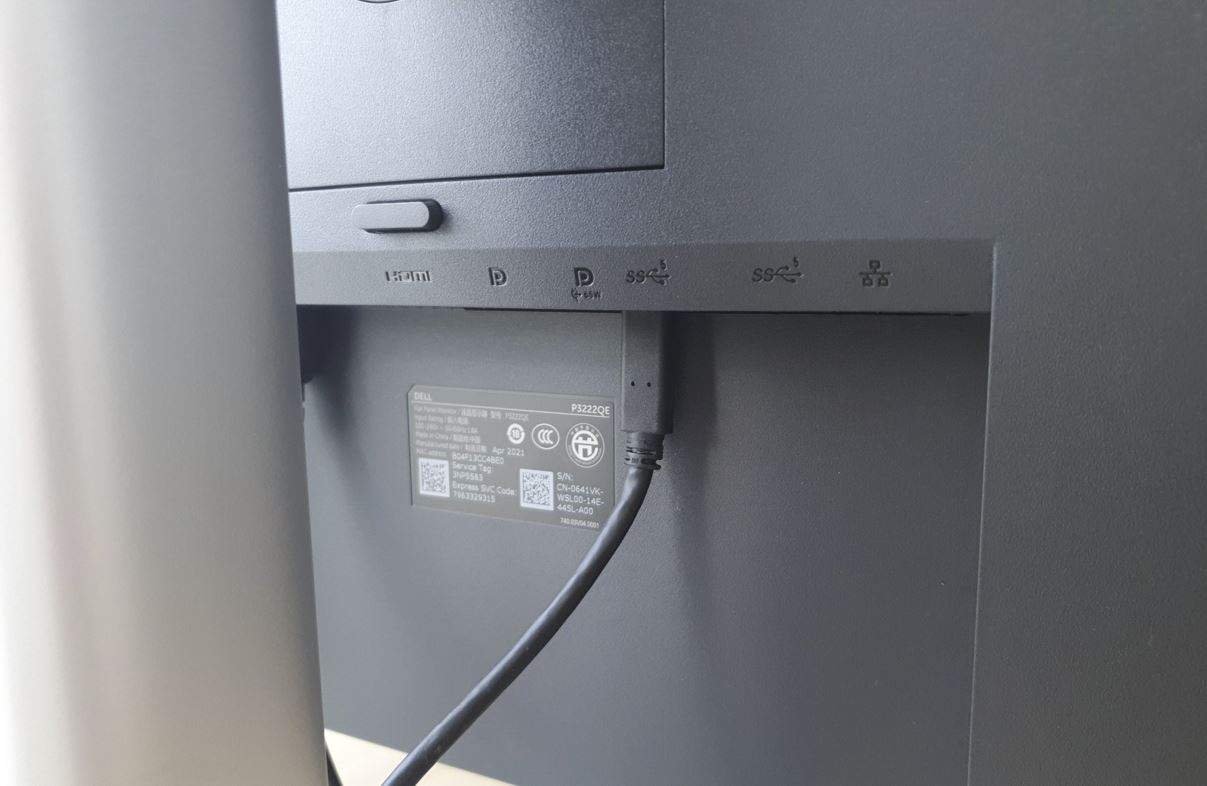 Before you can connect a whole bunch of stuff to your screen, you need to properly connect the screen to your computer, and you can do this in several ways. The simplest is the USB-C, no need to think in which direction to connect the cable or which output to use, we put the male in the female, and the image appears. On top of that, you can charge your laptop through the screen, which, while this feature has been around for ages, is still incredibly sexy.

The screen still has more traditional ports such as DisplayPort or HDMI for machines that are either older or fixed. These machines technically couldn’t take advantage of the product’s docking capabilities, but Dell has thought of that as well, including a USB-C to USB-A cable. Therefore, you can use the screen’s Ethernet port, even on your fixed PC, through this USB-A port.

In addition to the Ethernet just mentioned, there are four USB-A 3.2 ports present on this screen. Two are positioned at the back of the screen, intended for your sedentary peripherals such as a keyboard or a mouse. The other two are for more occasional connections, such as a USB stick or an SD card adapter, among others.

These ports are super practical, even on a desktop PC, to plug something in quickly without digging through the pile of cables at the back, but especially when you have a laptop, so you don’t have to reconnect your keyboard every time.

If this screen were to be revised, we would like to see a second USB-C port, allowing the USB-C to USB-A cable to be plugged in at all times. The management of machines that receive ports from the display could be handled based on which video input is used.

For example, if the screen detects that one of the USB-C ports is being used to display an image, access to the hub via the second cable is blocked, and all ports are redirected to the laptop. Even a laptop in the scenario could make the screen even more interesting for developers needing two machines.

The Dell P3222QE is an excellent, ultra-versatile display. Its sober and neat design will fit perfectly into all installations, but above all in a minimalist set-up.

Despite its competitive price, we would like to see a tactile “click” when the screen is perfectly aligned horizontally, as well as a wider gamut than sRGB.