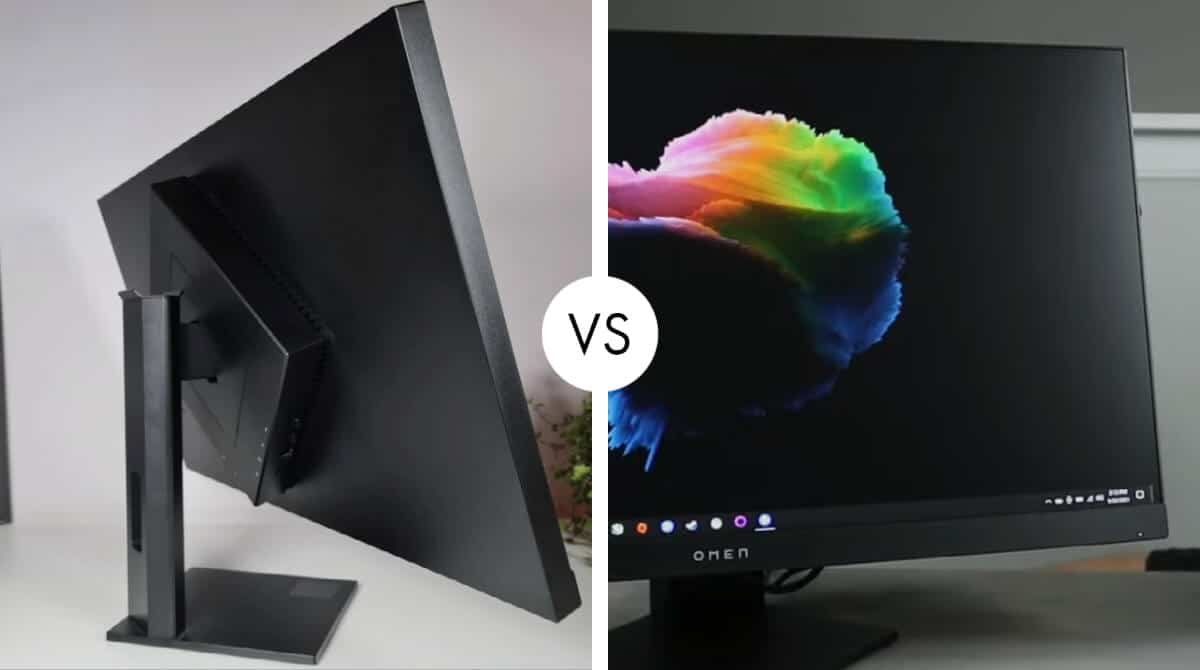 Finding a 24-inch Full HD gaming monitor that manages to stand out from the competition isn’t easy. The choice is often difficult in this category as the references are numerous and display similar characteristics. At first glance, the Omen 25i already has a few assets to get rid of the peloton! Enough to climb the summits?

You are probably wondering what this HP Omen 25i has to offer more than the mass of monitors that populate this category, under the bar of 355 USD! In truth, quite a few small (or large, the test will tell) things that you rarely find in this segment. 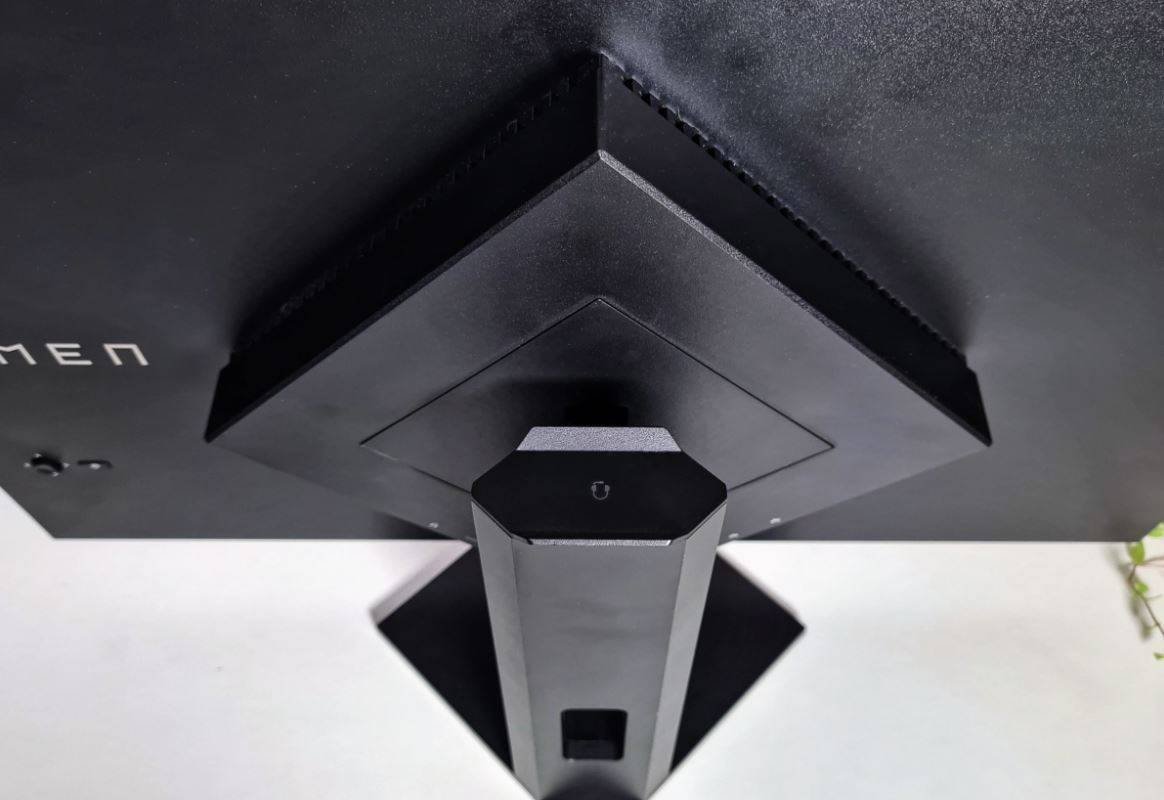 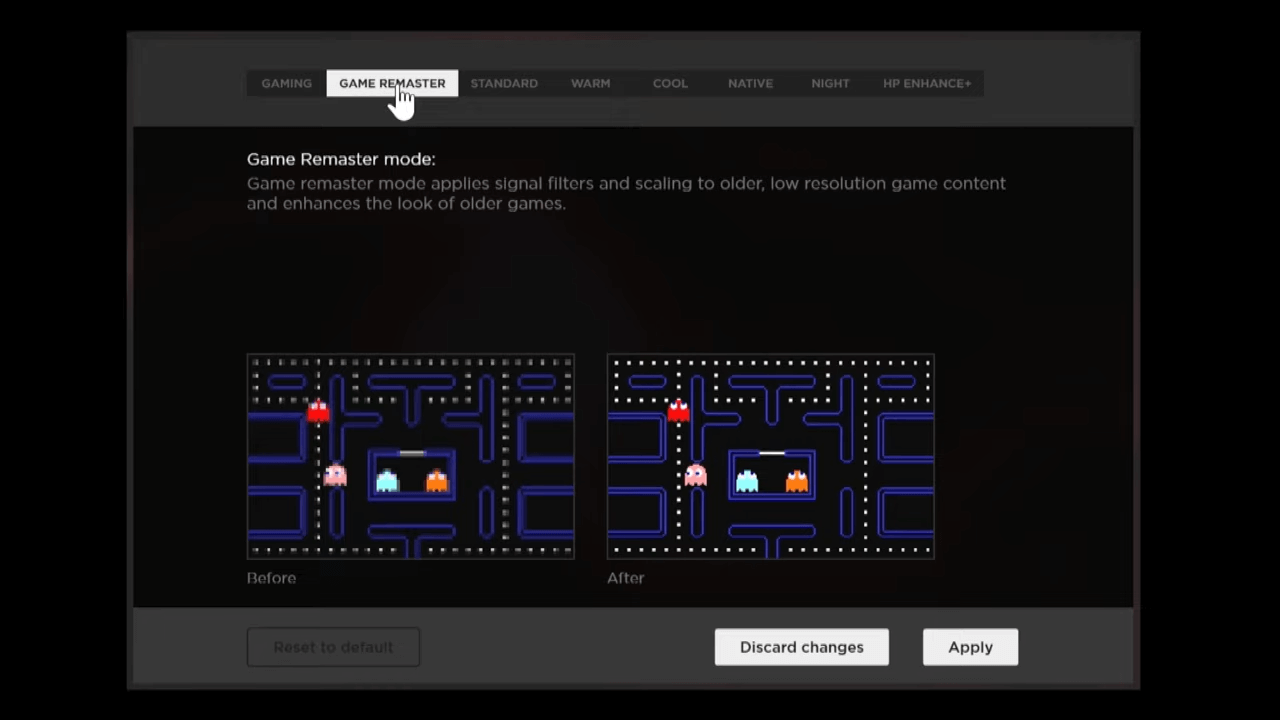 On paper, the Omen 25i has a lot of arguments to make: support for HDR, coverage of WCG ( Wide Color Gamut ) color spaces , the presence of G-Sync / FreeSync technologies Premium Pro , as well as new features, such as Game Remaster mode for retrogaming , and customizable reticle options. In short, a nice technical sheet and a package of features for such a price. It remains to be seen if this screen behaves well in game and if the novelties integrated here are relevant. 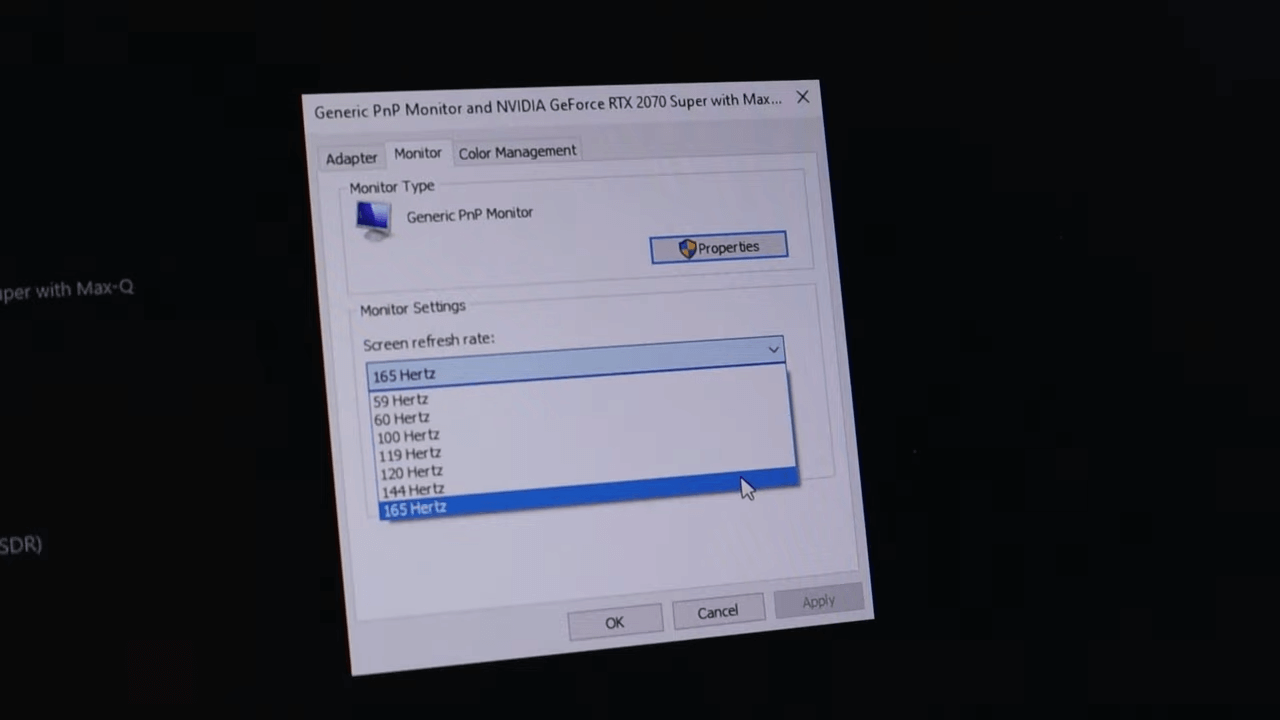 As its technical sheet shows, this monitor is much more attractive than its predecessor, the Omen 25, launched in 2020. The refresh rate goes from 144 to 165 Hz, but we especially benefit from an IPS panel with increased potential compared to the TN panel, which fitted the latter. Besides that, the screen is VESA Display HDR400 certified, and HP announces a color coverage of the DCI-P3 space of 90%. Like most gaming monitors on the market, HP mentions a response time of 1 ms for its 25i. 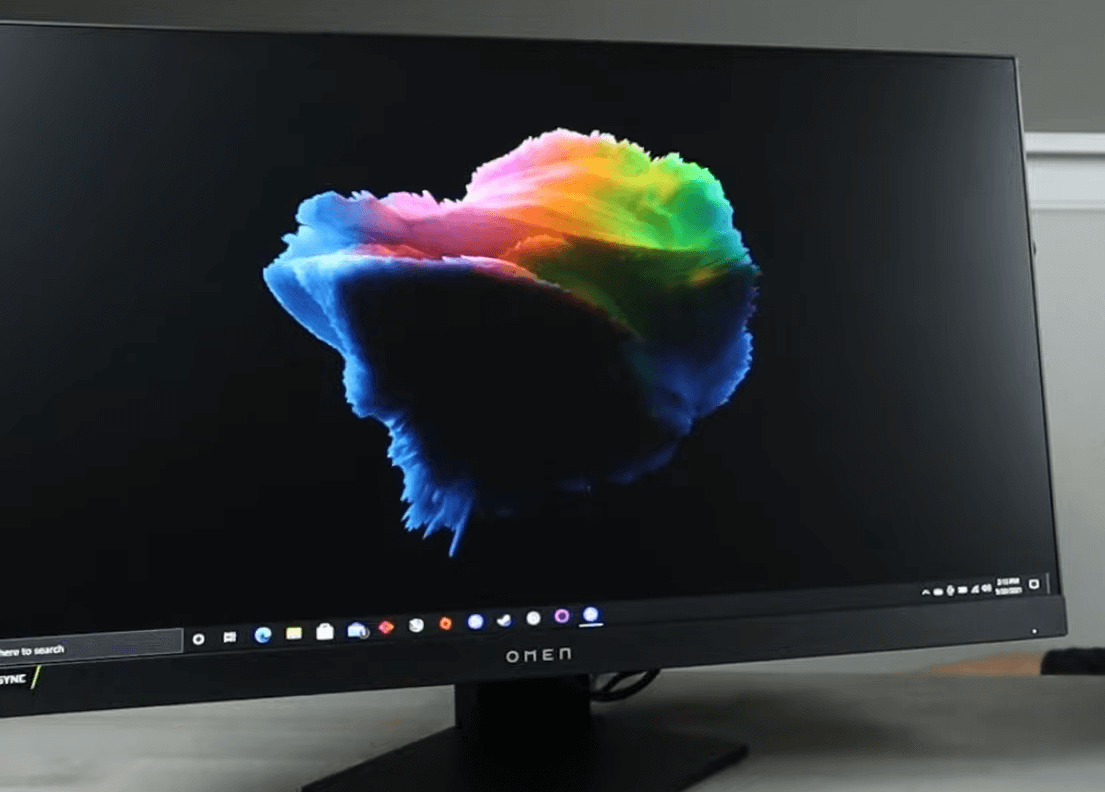 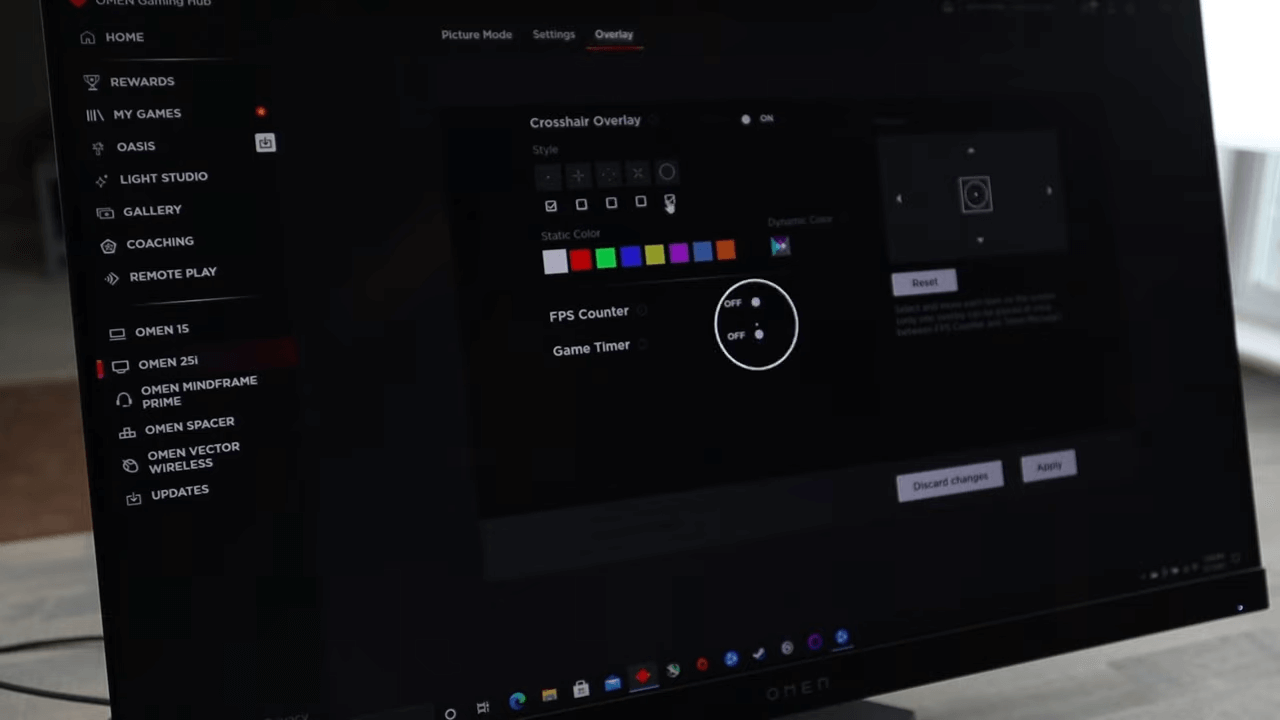 The Omen 25i was installed on our desk, was that in terms of ergonomics this screen does not do better than the others, and even shows more limits than certain models.

It’s simple; the only possible adjustments concern the screen’s tilt, on an angle ranging from – 5 ° to + 25 °. The monitor cannot be rotated, and there is no height adjustment possible. There is, therefore, a chance that the Omen 25i will ask you for some concessions depending on your desktop configuration and your habits. In my case, the lack of height adjustment is impacting because the screen is positioned lower than my usual monitor, which ultimately forces me to tilt it slightly to find the correct viewing angle. Fortunately, the VESA mount will allow those who have a compatible mount to improve this position greatly.

HP finally focuses on minimalism with this new screen, a choice that pays off in ergonomics. That aside, the aesthetics of the 25i are clearly recognizable, the support takes the shape of the rear frame where the connectors are located, and it must be recognized that this monitor does not take up much space on the desk. 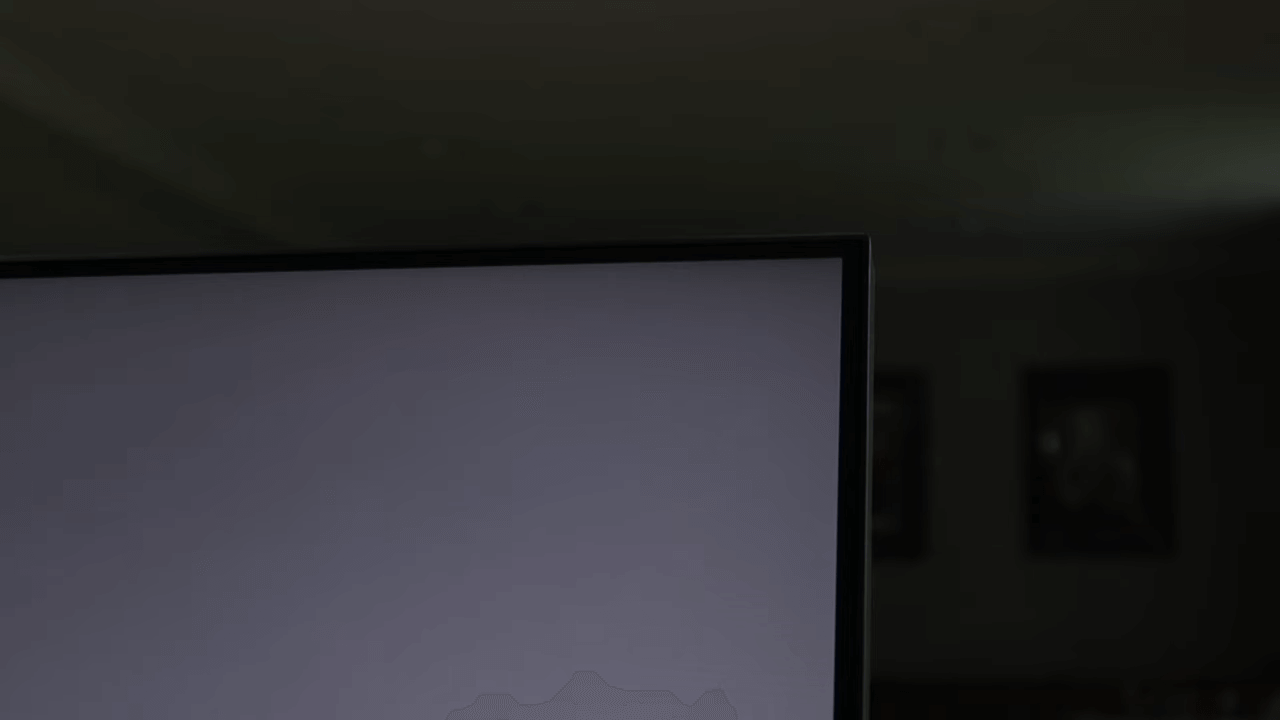 Except for its lower part, the screen has three relatively thin borders that leave plenty of room for the image. No eccentricity is to be noted here, and therefore no RGB lighting. The controls are placed at the back of the monitor, on the right, with a power button and a joystick that allows navigation within the OSD. The power LED is very discreet, again at the bottom right of the screen.

To finish on the appearance of this Omen 25i, note that the overall level of finishes is good, the plastics seem robust, and we only perceive slight crackles when handling the monitor. The skeleton of the support is made of metal and weighs its weight, thus ensuring the ideal support of the screen despite its contained dimensions.

Easily accessible, the connectors are located on two sides of the rear protrusion of the monitor, which takes the shape of the Omen logo. 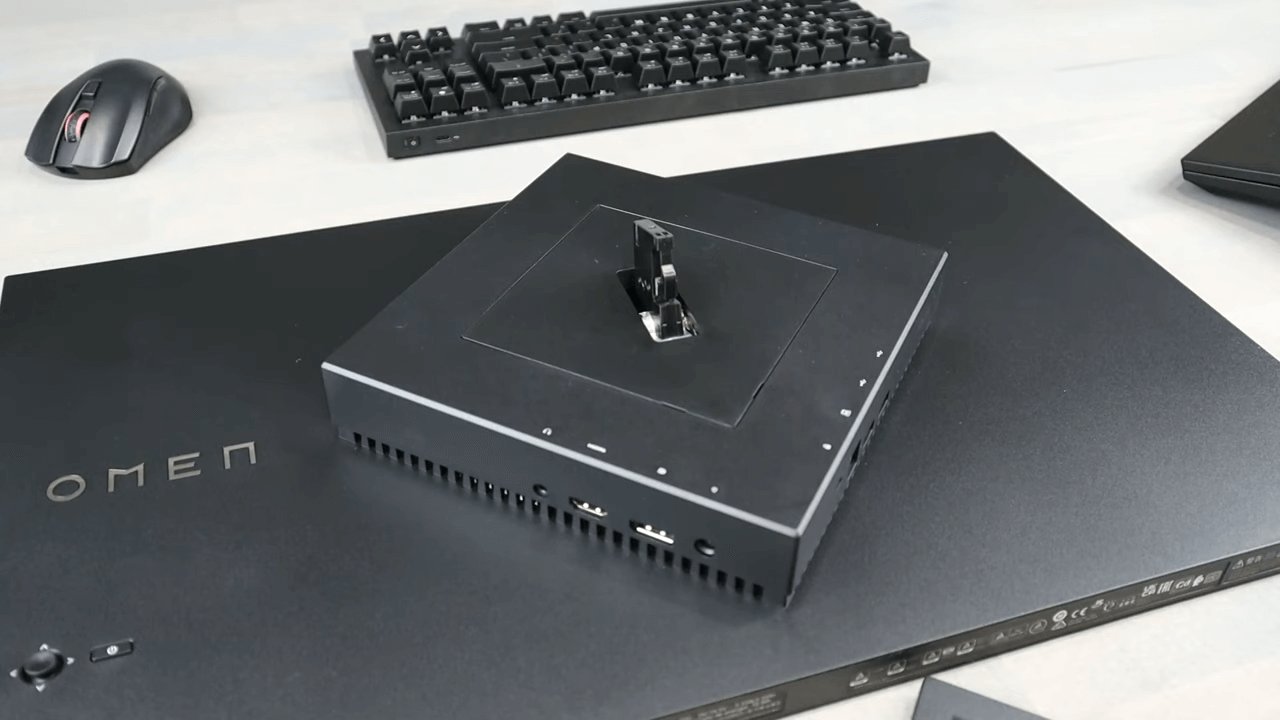 There is an HDMI 2.0 port and a DisplayPort 1.4, accompanied by a 3.5 mm mini-jack, two USB-A 3.2, and a USB-B port that supplies power to the other two ports. As the power supply is not integrated into the monitor frame, you have to do with an external unit under the desk. Its dimensions are, however, thin enough that it is forgotten. 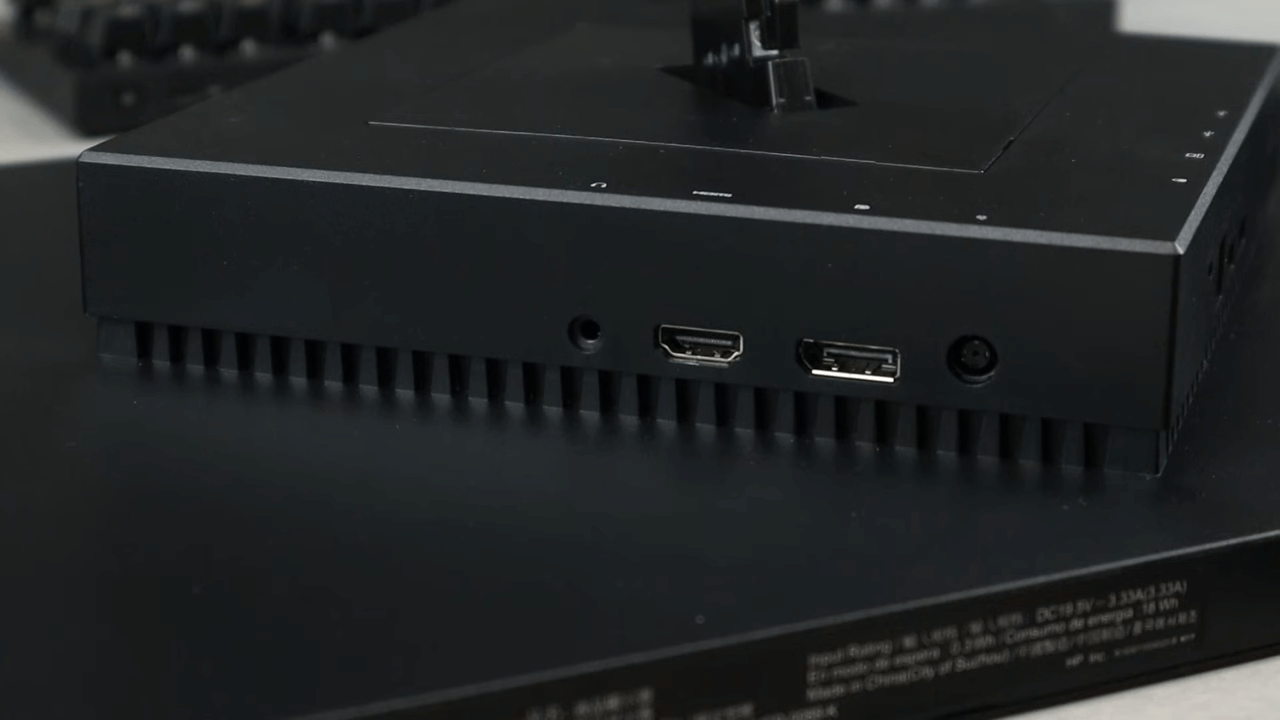 Like any dedicated gaming monitor, the Omen 25i integrates a lot of features into its OSD. Everything is accessible via a joystick on which we have nothing to complain since it handles perfectly. 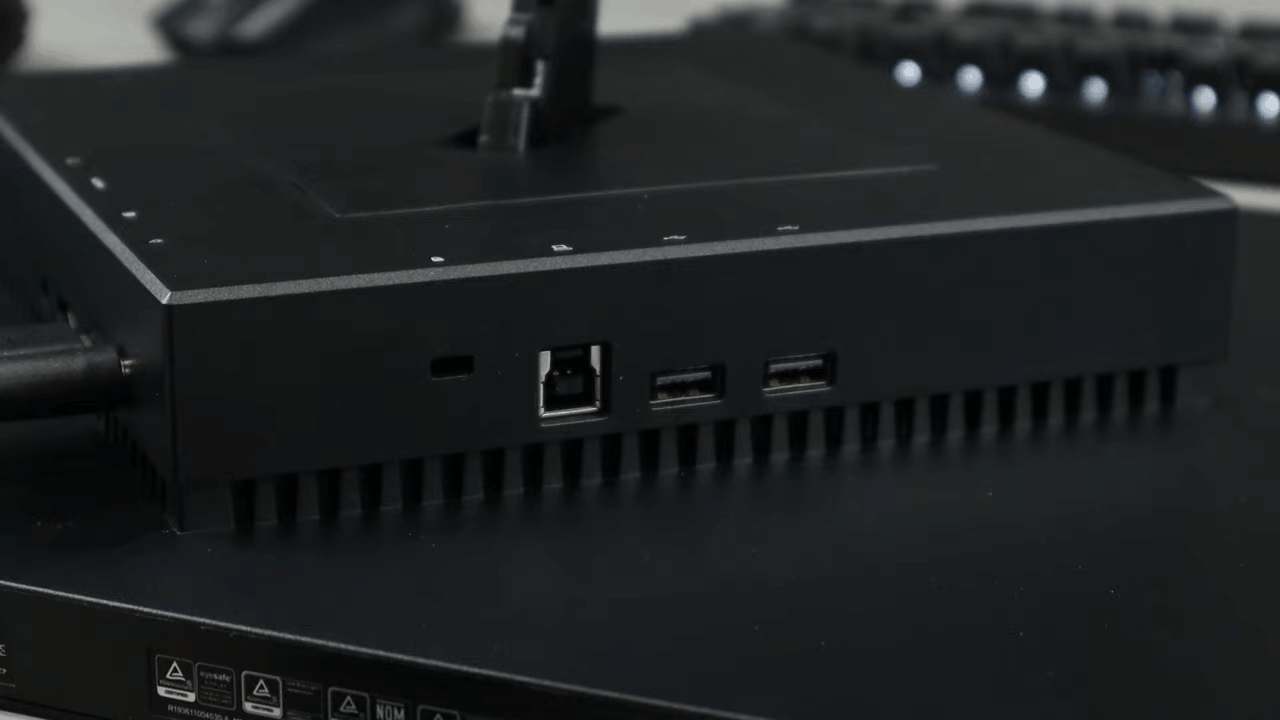 We then take advantage of a good number of customization and configuration options, first with the Games menu, under which we can, in particular, activate and deactivate Adaptive-Sync, display an fps counter, apply an overdrive in view to reduce the response time, set timers, or even access the Dynamic Crosshair, which allows us to customize the reticle with a total of 248 possible combinations.

The MPRT option, for its part, uses motion blur reduction technology, thanks to a strobe backlight that can be configured in five stages. Activating it can help in some cases, but there are two major constraints: VRR technologies are not available when this option is activated. The brightness of the screen decreases more or less strongly depending on the level chosen. 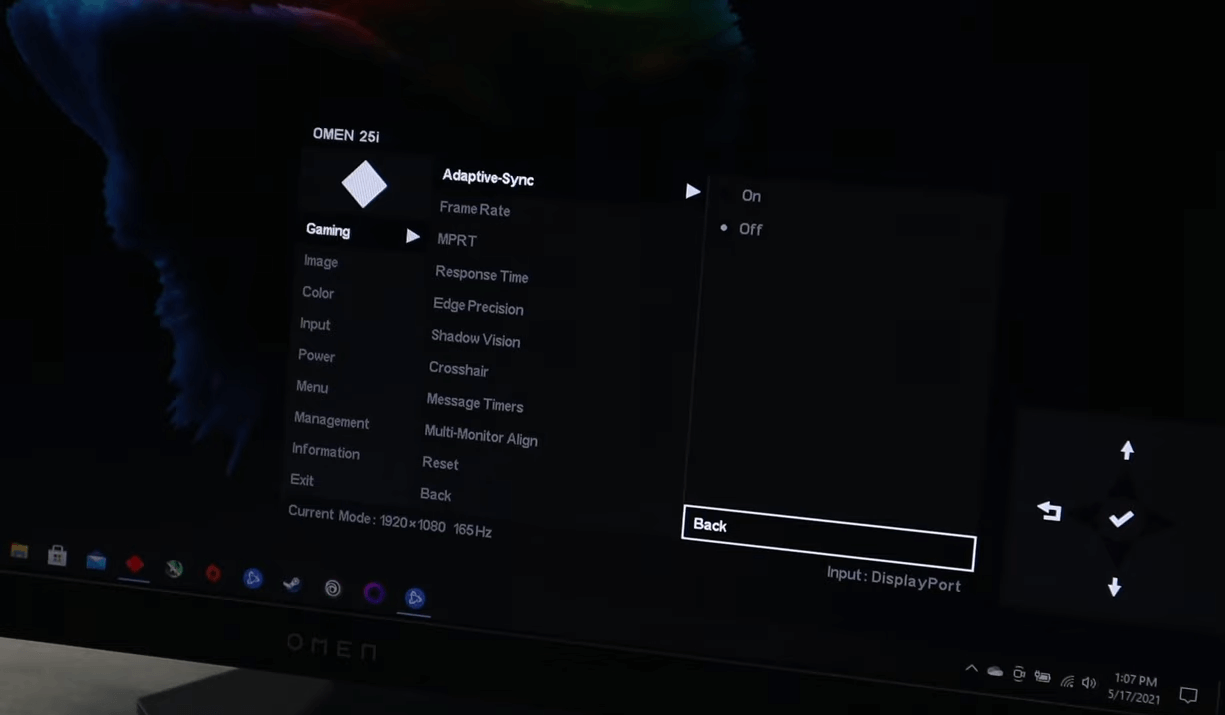 Finally, note that the Omen 25i has eight different image modes that can be adjusted by playing on the RGB colors. We also like to find the PIP / PBP features, which is not always the case on gaming screens. Various small adjustments are dispensable, of course, but extend the list of customization possibilities a little more. It is, for example, possible to configure a standby mode or a power-off timer to deactivate the power LED, modify the position, the transparency, the display time of the OSD, or even to modify the shortcuts. Of the joystick.

Detected as G-Sync compatible and supporting FreeSync Premium Pro, the Omen 25i displays smooth images in all circumstances with its 165 Hz refresh rate. The difference between a 144 Hz screen and this one is clearly imperceptible to the eye. Still, competitive players will certainly prefer a panel capable of displaying 240 fps, even without the HDR and the potential of this monitor in terms of calorimetry.

In this regard, let us specify that the overdrive does not seem to bring much to this monitor: we did not notice any significant difference between the default setting and the fastest option. Finally, good news, since it spares us the phenomenon of reverse ghosting. 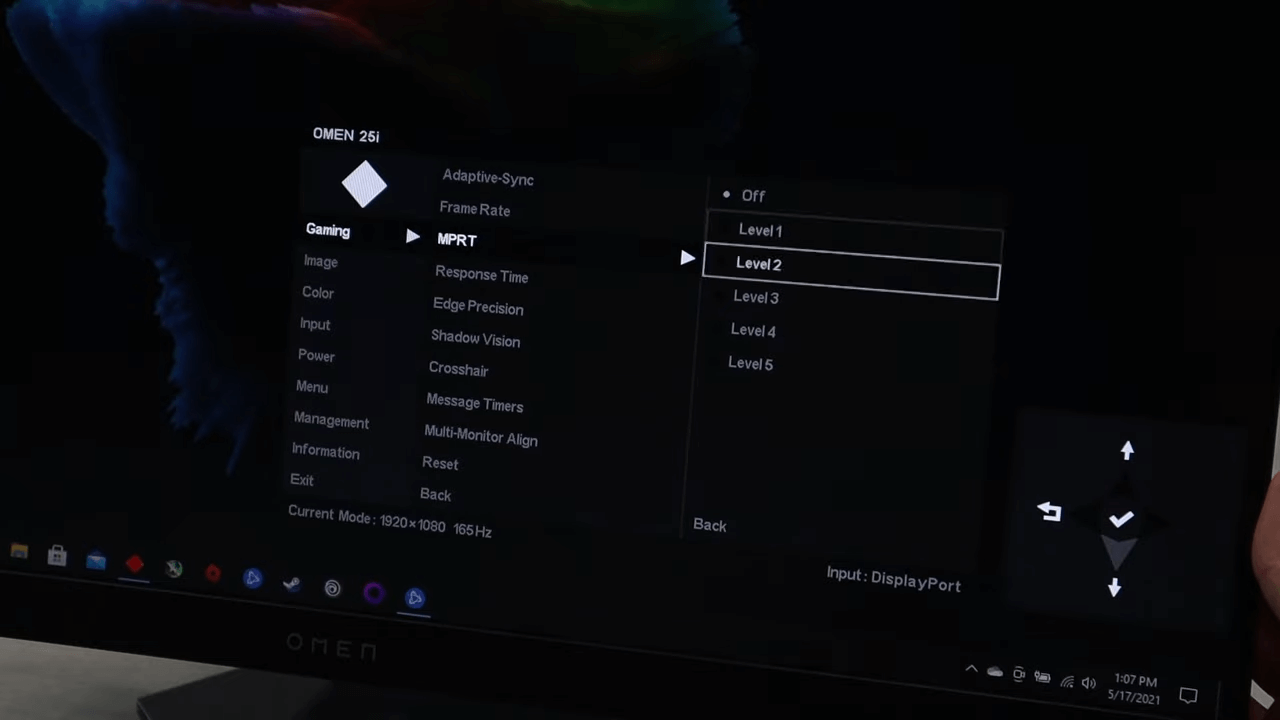 Finally, if we sometimes noticed slight ghosting on the fastest movements, we did not feel the need for action with the MPRT option. The monitor input lag is average; the measured latency is only 9 ms with this Omen 25i, a value here again in the average compared to the other screens that we were able to test recently.

Finally, note that the Game Remaster Mode is only dedicated to games that run in a definition lower than Full HD. Its activation is therefore unnecessary in most cases, except on retro games. This mode also degrades the image if you use it under normal conditions; under Windows: the text loses sharpness, just like the image. We finally released several recent games to see the differences in performance between a lower definition (1280 x 720, 1024 x 768, and even 640 x 480 pixels) and FHD.

The Omen 25i consumes 14.2 W, which consists of diffusing a white test pattern adjusted to 150 cd / m² on a 10% window. The result is a relative consumption of 86 W / m², a value that remains average for a gaming monitor of this type.

The arrival of the HP Omen 25i on the French market is imminent, it will be available from July 15. HP has set its price at 355 USD, a price at which there are now some references whose refresh rate peaks at 240 Hz, but with which we can not take advantage of HDR.

The Omen 25i is distinguished by the care taken by HP, succeeding in its bet to produce a faithful monitor, sufficiently powerful, and embedding some new features that will appeal to several players, all at a low price.

All of this, however, does not come without concessions. We must actually be content with far too limited ergonomics, software with invasive behavior, and rely on performance slightly lower than other monitors marketed at a similar price or only a few tens of USD more. 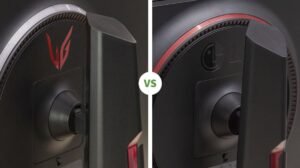 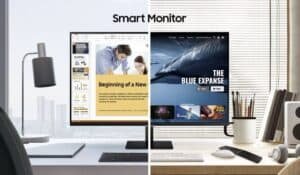 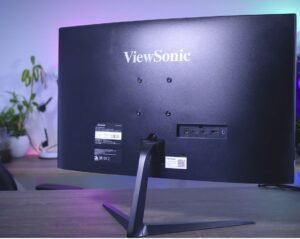 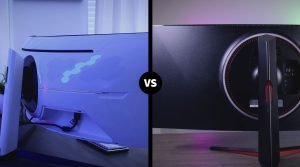 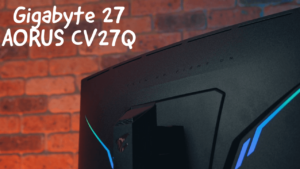