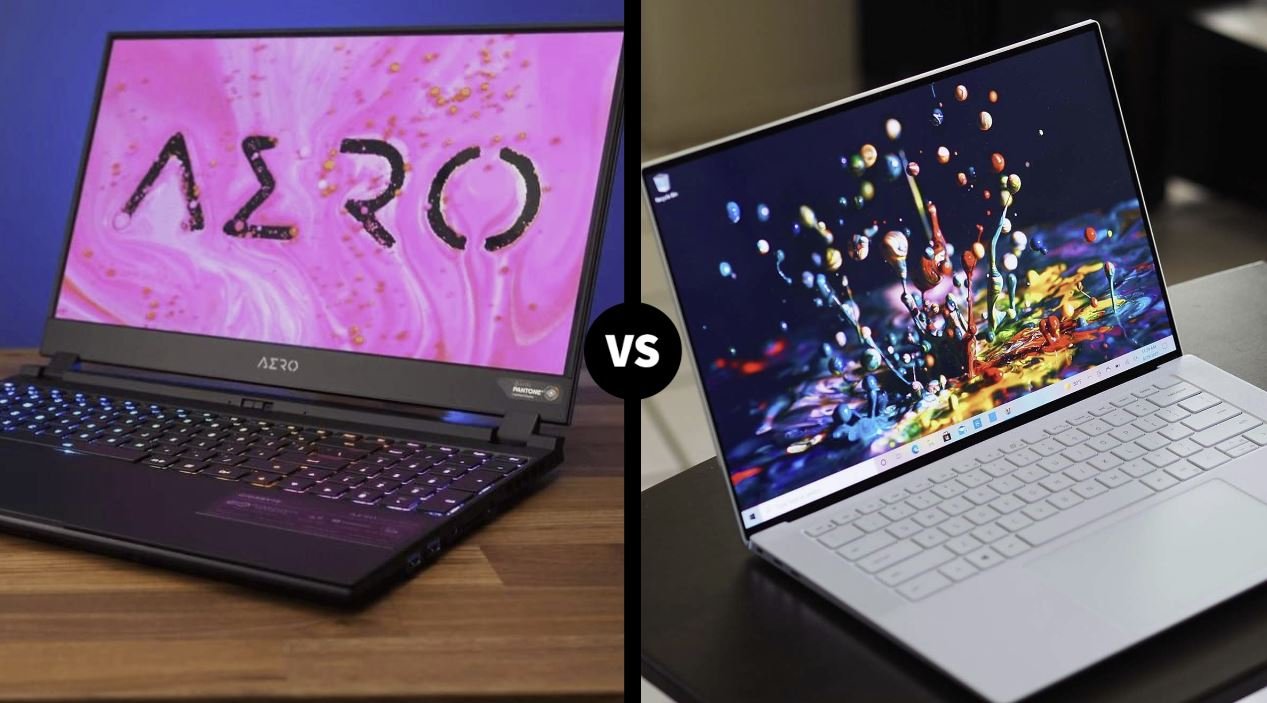 AERO 15 OLED is a very high-performance notebook PC for creators. The graphics of the new generation GeForce RTX 30 series are equipped with Core i9-10980HK, the highest peak of Intel CPU.

The display is equipped with a high-definition 4K organic EL display with DCI-P3 100% cover, making it ideal for video editing and content production. Despite its high performance, the body is thin and lightweight, and it is easy to carry to the shooting site. Although it is a PC with a large battery capacity and high power consumption, it can be battery-powered to some extent for light work.

The XPS 15 (9510) is a 15.6-inch notebook PC that features high specifications for creators and high design. Moreover, it weighs less than 2 kg and is easy to carry. You can choose to configure the Tiger Lake-H45 series with GeForce RTX 3050 Ti. In addition, a wide color gamut display that suits the purpose can be installed.

In addition, it has a high design and a high texture, so it will look incredible when used outside. This model is recommended for professional-level creators and those who want a high-quality notebook PC that can work efficiently.

GIGABYTE’s AERO 15 OLED adopts a 4K organic EL panel and is equipped with the GeForce RTX 30 series as a notebook PC for creators.

As the product name suggests, AERO 15 OLED uses OLED (organic EL) for its display. Compliant with HDR400 standard, 100% coverage of DCI-P3, suitable for video editing. The refresh rate is 60Hz, so it’s more ideal for creators than gamers.

As mentioned above, the AERO 15 OLED has relatively high performance, but it is also a significant feature that it is thin at about 20 mm and light at about 2.0 kg (2.238 kg in actual measurement). You can easily carry a PC with specifications that allow you to edit videos and play games very comfortably on the go.

AERO 15 OLED can be configured into two units by adding sub-storage as a personal computer. You can also change the initially installed SSD to a faster and larger capacity one. Creators who handle videos and RAW data use a lot of storage capacity, so it is a good idea to install a large capacity SSD.

The AERO 15 OLED achieves extremely high cooling performance with the latest WINDFORCE Infinity cooling system. Efficiently cools the inside with 2 huge fans and 5 heat pipes, and despite using high-end parts for both CPU and GPU, the temperature of CPU / GPU is high even in high-load work. It doesn’t become too much.

The AERO 15 OLED is equipped with a 99Wh high-capacity battery, and AI manages the wattage settings of the CPU and GPU while the battery is running. It’s not as long as a mobile laptop, but it has a long battery life for a high-performance laptop.

This product is equipped with Samsung AMOLED and complies with the HDR400 standard with a very high contrast ratio of 100,000: 1. The color gamut is wide, and the response speed is as fast as 1ms. In addition, it has acquired X-Rite Pantone certification, and the correct color is displayed from the beginning.

The highlight of this new iteration of the XPS 15 is the 15.6-inch OLED display. It has a resolution of 3456 x 2160 pixels, which is a bit lower than a 4K TV resolution. Dell calls this a 3.5K display. There is a 4K screen option for the same amount, but this uses a more standard LCD. However, this OLED display is worth a slight reduction in resolution. It has the same deep, clean black and bright, transparent colors as the XPS13.

This 16:10 aspect ratio OLED display covers 100% of the Adobe RGB color gamut and 94% of the DCI-P3’s wide color gamut. This means it can produce a wider range of colors than most laptop displays. This is great for photographers and filmmakers, but it’s easy to reproduce the color range of a 4K movie (though not in full resolution), and it’s compatible with HDR for games and movies so that you can watch movies. It’s also great for people.

The XPS 15 has two ThunderBolt 4 and SD card slots on the far left and one USB-C and Kensington lock slot on the right. This is a decent number of connections, and you can also plug-in power cables on both sides of the body, so you can easily use it on your lap with a power socket on one side.

The XPS 15 are different GPU options. This unit came with the Nvidia 3050 Ti with 4GB of DDR6 RAM. Before getting too excited, this is a laptop model for this GPU and not as powerful as a desktop cousin. It consumes up to 45 watts instead of the 90 watts used by this desktop version of the GPU. Therefore, it does not show the same performance as the desktop 3050Ti.

Gigabyte Aero 15 OLED XD is for creators with extremely high performance, equipped with Core i9-10980HK and GeForce RTX 3080 Laptop at the maximum. The display is equipped with a 4K organic EL panel with DCI-P3 100% cover that has received X-Rite Pantone color proof certification.

The body is thin and lightweight, and you can carry this high-performance notebook PC with you. Installing “Azure AI” is easy because you do not have to change the mode each time you work.

The Dell XPS 15 9510 offers many features, including state-of-the-art processor performance and a bright, clear 15-inch OLED screen that enhances your content look. However, stepping up to a larger screen has some drawbacks. Laptops are much larger and heavier than the XPS 13, making them much more expensive, especially with OLED displays and NVidia 3050 Ti GPUs. But it’s reasonably priced for a feature-packed package that’s portable and gives you real performance.