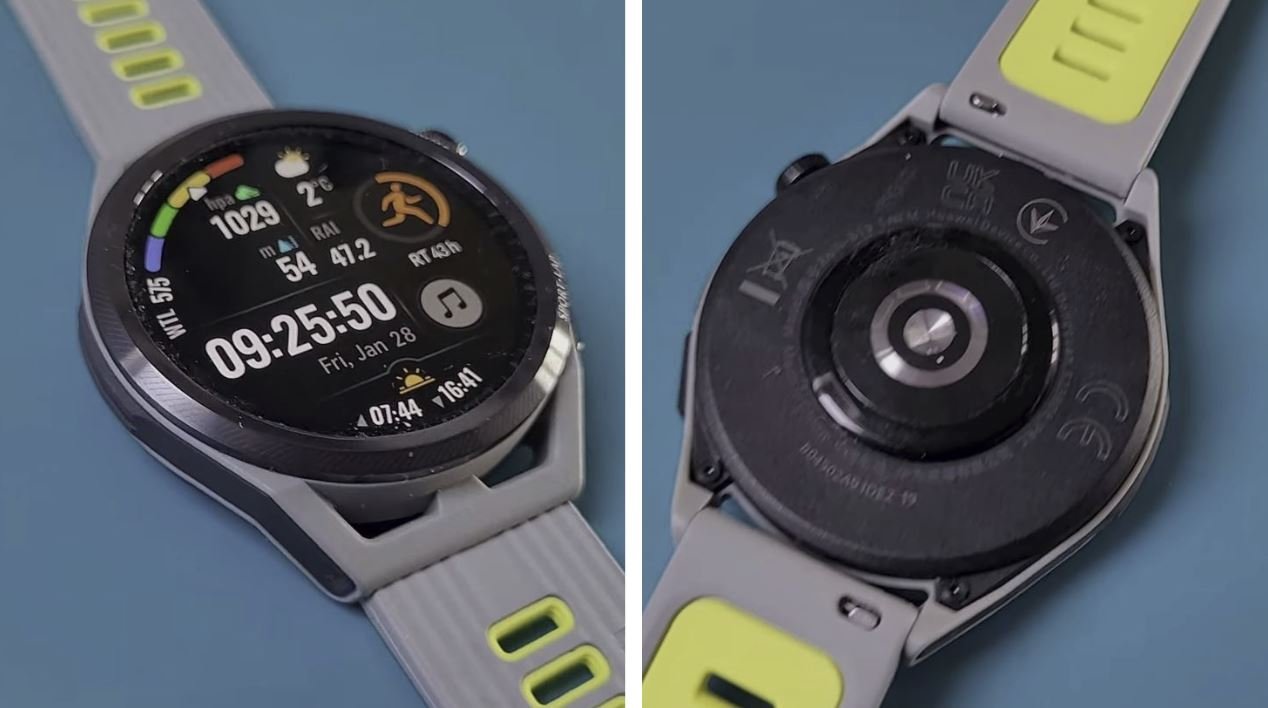 Huawei is one of the world’s leading telecommunications equipment manufacturers that surpasses Apple in the world market share of smartphones.

It is also popular in smartwatches, with a global market share of over 15%. Like many Chinese corporate brands, we sell high-performance products with very high-cost performance. 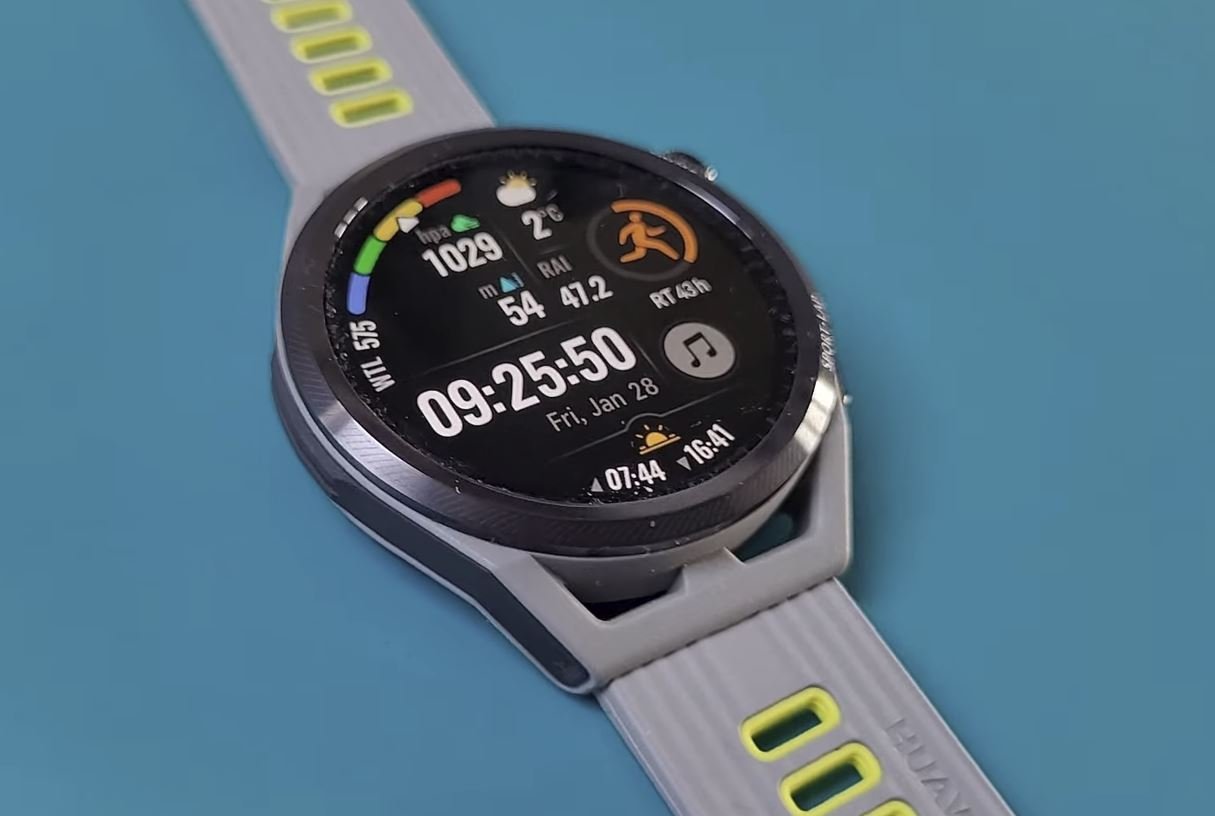 Huawei released a new cardio-GPS connected watch only a few weeks after the GT 3. Lighter, equipped with brand new sensors, the Huawei Watch GT Runner does not hide its objective: to be on a par with the best-established sports brands on the market.

Among them, the HUAWEI WATCH GT series is a middle range to high-end series, and there are sports models and classic models, and it has all-around functions.

The “HUAWEI WATCH GT Runner” introduced this time is a model with enhanced functions for runners, and the price is 300 USD, which is positioned as a high-end model among HUAWEI smartwatches.

The appearance looks like this, and the logo shines brightly, giving it a luxurious feel. Inside is the smartwatch body, a dedicated charging cable, an M-sized replacement band, an instruction manual, and a warranty card.

Charging is a magnet type with a dedicated cable. It’s a long battery that doesn’t need to be charged for 2 weeks for light use, so you don’t have to take it to your travel destination, and one charging cable at home will suffice.

When it comes to smartwatches, Huawei is not to be taken lightly. The Chinese brand has already proven that it has certain know-how in the design of smartwatches. HOWEVER, the GT Runner is the most ambitious of the Asian firm’s sports watches. 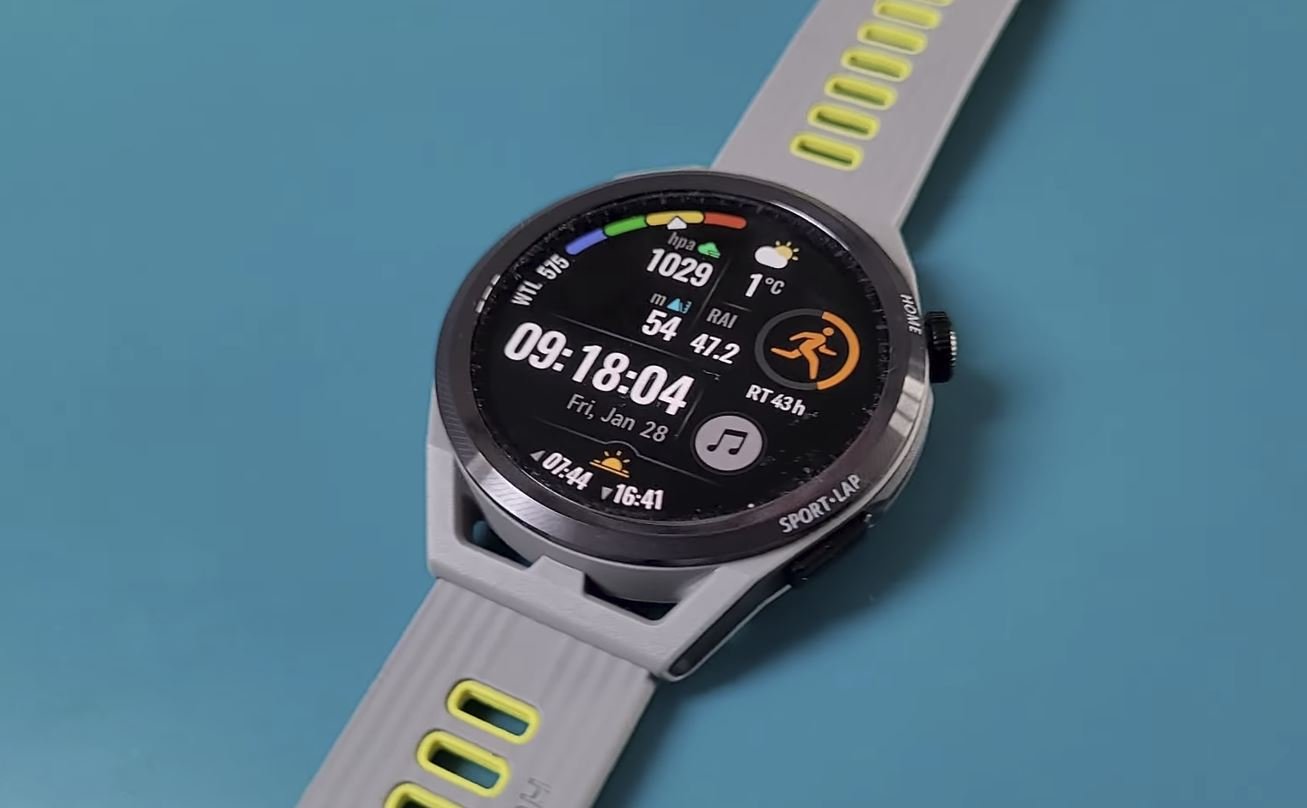 Huawei’s latest creation will come up against some pretty tough competition at this price level. On one side, we have the Garmin Venu 2; on the other, the Suunto 5 Peak. Two watches are dedicated to athletes at similar prices but retain a maximum “general public” approach.

A priori, a few things differentiate the GT Runner from the GT 3. Both smartwatches sport a 1.43” AMOLED screen. They both use a dual-band GPS. And they are both equipped with the HarmonyOS system. 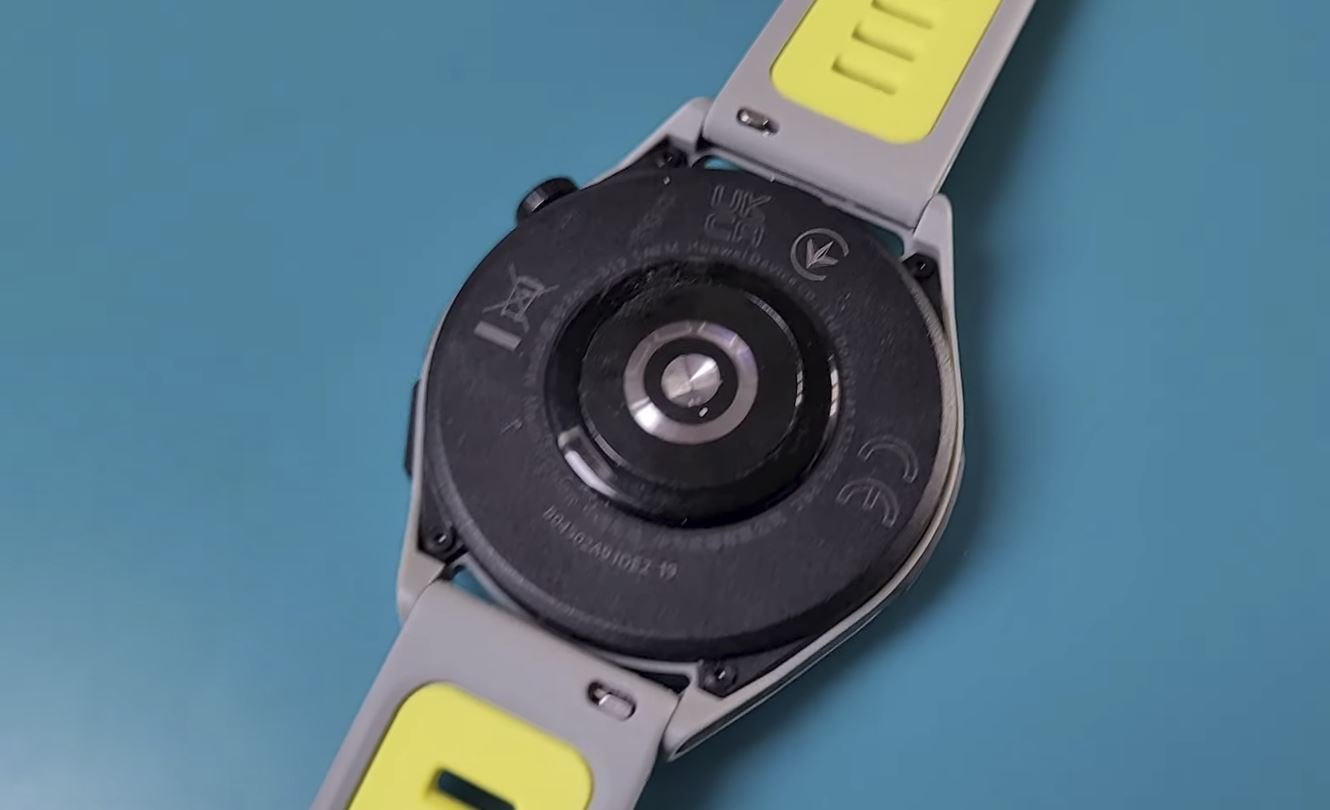 Well, the novelty lies above all in the monitoring of sport. The GT 3 was rather well equipped on this side. The Watch GT Runner goes a step further by offering us new metrics and the possibility of importing GPX tracks via a file or via the Komoot application. It also highlights its adaptive training programs, not yet launched on the GT 3!

Although it uses most plastic for its 46 mm case, the GT Runner is very beautiful to look at. The sports connected watch is also lighter than the GT 3, with only 53 grams, against 72 grams for its elder. The box remains, however, of the same dimensions as before.

We also find the same rotating crown system, assisted by a rectangular button just below.

As usual, the bracelets are easily interchangeable by universal models. Note, however, that the inner corner is widened. A modification is needed to place the antennas of the dual-band GPS module. According to Huawei, this allows faster signal capture and better accuracy. Let’s hope it’s confirmed; the Watch GT 3 was far from being at the top in this part.

Just like the case, the screen of the Huawei Watch GT Runner is on top. It uses the same specifications as the GT 3, which is not displeasing to us. The AMOLED panel is particularly bright, remaining fully visible even in direct sunlight. Its high resolution ensures perfect readability, even for the smallest characters.

Of course, this screen also has an  Always On mode. It works perfectly and adapts to the watch face used. THEREFORE, the GT Runner has absolutely nothing to envy its competitors; it is one of the most beautiful connected watches of the moment, a real treat to watch daily!

The touch screen is smooth and stress-free. The watch weighs 38.5g and has a beautiful ceramic-finished bezel, and the screen is a full-color 1.43-inch AMOLED display.

You can scroll the screen by dialing the crown button, so you can operate it even if you are wearing gloves.

We are now starting to know HarmonyOS well, the Watch GT Runner being the third watch from Huawei to take advantage of this operating system. Therefore, we will not do a new detailed tour of this OS, which you can discover in our previous reviews of the Watch 3 and the Watch GT 3. Instead, we’ll focus on what’s new.

The interface of the GT Runner is almost identical to that of the GT 3. Huawei changes the display of the list of applications, which is not a cloud of icons but a vertical list. However, you can change the look in the settings.

The HarmonyOS has made some progress, although there are still some black spots. The Sanitas app is now operational. This allows you to set daily goals to improve your health: stay hydrated, take a certain number of steps, sleep at least 8 hours, etc. It’s nice to finally be able to take advantage of this app which was not functional during our previous tests of smartwatches under HarmonyOS.

We can see that Petal Maps is also back. This application allows step-by-step navigation with the Watch GT Runner combined with an Android smartphone. There is still no background map.

Access to the App Gallery store is also limited. Just like on the GT 3, there are still few apps available. You will also need to use a smartphone running Android or HarmonyOS to download new apps.

This is also a big flaw of this watch: it loses some functionality when using it with Apple smartphones. Not only can we not download apps, but we also cannot use route transfer from Komoot. Also unable to download music to internal memory, although the player finally works fine with iOS. You also won’t reply to your text messages with pre-recorded messages. In short, iOS users are a little left on the sidelines at the moment. Note, however, that Huawei is progressing slowly but surely with each update. There is no doubt that in the fairly near future, connected watches running HarmonyOS will do very well on all platforms.

Huawei Watch 3, we noted a significantly lower battery life than the old Huawei watches under LiteOS. Then the GT 3 had reassured us about the possibilities of HarmonyOS. Fortunately, the GT Runner follows the same path as its sports elder.

Huawei thus announces 8 to 14 days of battery life depending on use. According to our tests, you can count on about 12 days at most by cutting out a few options, such as the reading of stress or SpO2 permanently. Conversely, if you fan the  Always-On mode and galore metrics, the battery will last about 5 to 6 days. Therefore, the Huawei Watch GT Runner is as durable as the GT 3, impressive!

Huawei uses a wireless base for charging, the same as its previous connected watches. The charge, therefore, takes a little longer than with smartwatches using a cable. However, this is not very embarrassing given the few times you will have to put the watch on its base. 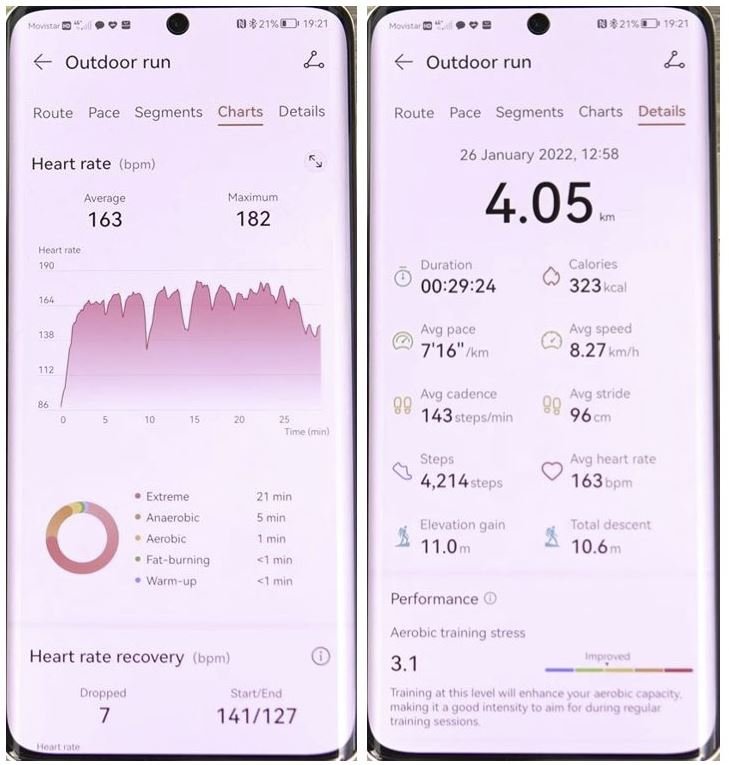 HUAWEI WATCH GT Runner” measures “Running Ability Index.” By calculating the running ability index based on multifaceted data such as heart rate, pace, distance, and frequency of past running, you can more accurately know the target’s deviation. In addition, by objectively measuring the “training load,” you can control the appropriate rest time after a high-intensity session and the amount of training that suits you.

Using these values ​​as core data and combining them with multiple other data, we provide training data and suggestions based on scientific evidence such as fatigue level, recovery time, aerobic/anaerobic training intensity, and training index. 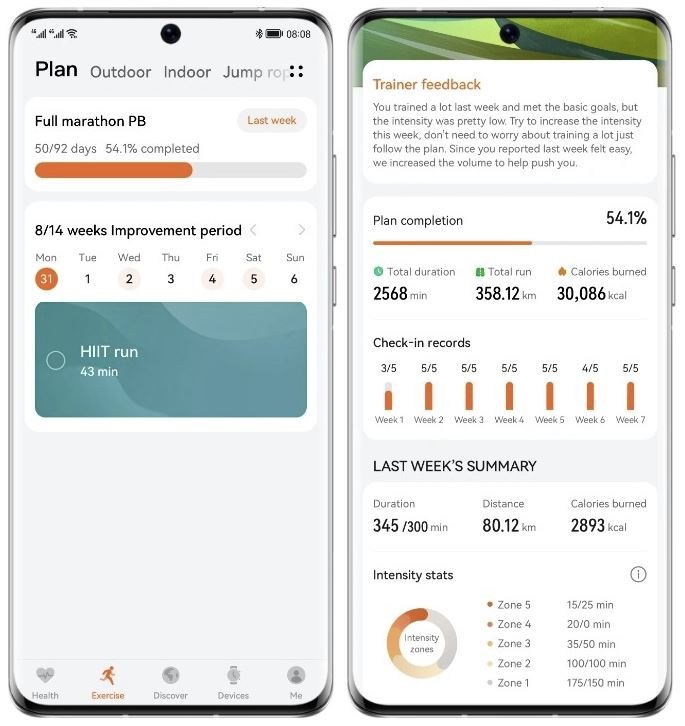 In addition to gender, height and weight, you can customize your training plan to suit your heart rate, running distance and frequency, pace and more. The AI ​​Running Coach scientifically analyzes your training data for the week and automatically adjusts your running schedule for the following week so that you can expect gradual growth. In addition, real-time voice guidance provides voice notification of physical data such as heart rate and pace during running and current training goals.

HUAWEI WATCH GT Runner” is equipped with abundant health management functions such as continuous measurement of blood oxygen level, sleep monitoring, and stress monitoring. You can easily check the log data by linking it with your smartphone and recording it in the “HUAWEI Health” app.

In addition, the new function “Health Task Management” allows you to set reminders related to health management such as wake up, drink water, breathing and step count to raise health awareness.

Equipped with more than 100 workout modes. Not only for daily training, but also various sports such as mountain climbing, skiing, and extreme sports. In addition, the route back function allows you to check the route offline while running or to see the route recorded in real-time and return to the original road. In addition, the built-in barometer monitors the current barometric pressure in real-time, and if there is a sudden change, it vibrates to alert you.

The Huawei Watch GT Runner is a real favorite that will appeal to sports enthusiasts. It is very light, with a magnificent AMOLED screen and enormous battery life, it has great advantages to show. As it is, it is already very convincing for the sport. It only remains for Huawei to improve HarmonyOS to get the full potential of this beautiful smartwatch finally!