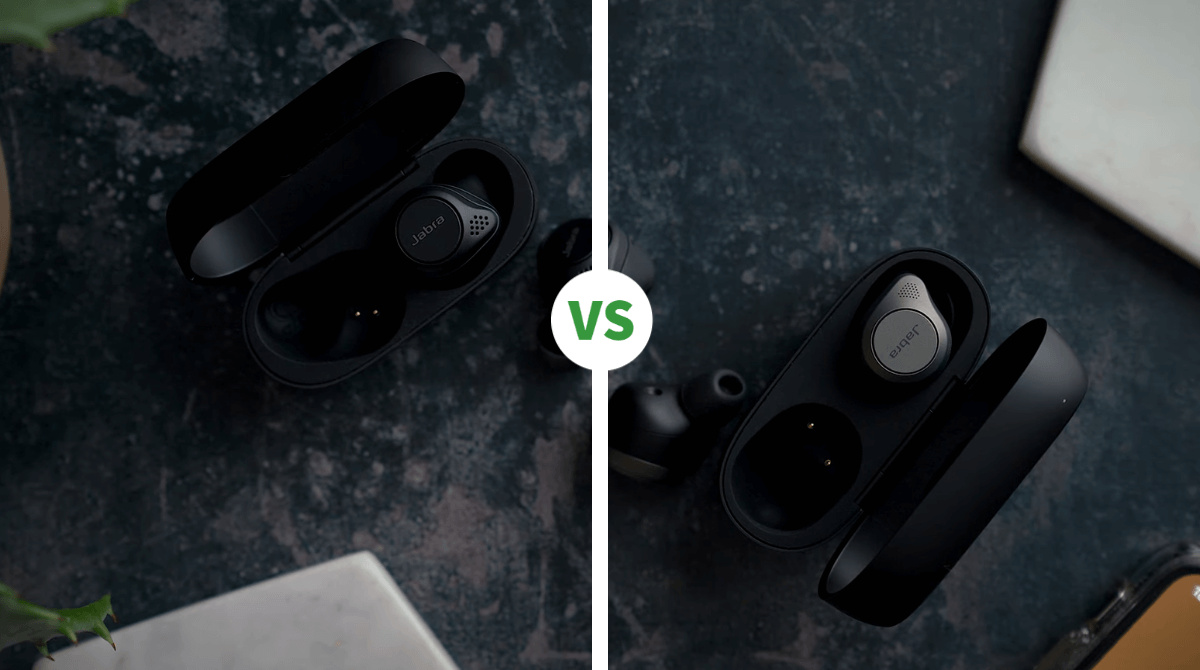 Today we bring you in scoop a comparison and analysis of the recently released Jabra Elite 85t that the Copenhagen brand launches on the market, and we will compare them with their little brothers, the Elite 75t. We will see a comparison in technical characteristics, quality, technology, and price. Who will win the battle? We see it!

Taking a look at both models, we see that both come in a uniform design in Gray and Yellow colors with a minimalist finish as far as the box is concerned. On the front, we can see a capture of the headphones, as well as some of its most outstanding specifications. On the back, it will detail without over-enlarging so as not to overload the nice box with literature, a summary of the main characteristics, as well as a capture of the case.

In the case of the Elite 75t box, as you can see, it is of a somewhat larger size, without the need for so much packaging as we found in the Elite 85t in which they have already improved this aspect.

Inside the Elite 85t and after removing them from the box, we will find the case itself and headphones, along with a kit of gel spare parts of various sizes, in this case, the S and L, since the M size are installed in the headset, and after lifting the flap, the back contains a USB charging cable and quick start guide that is of little use to us because we will configure them in the app. 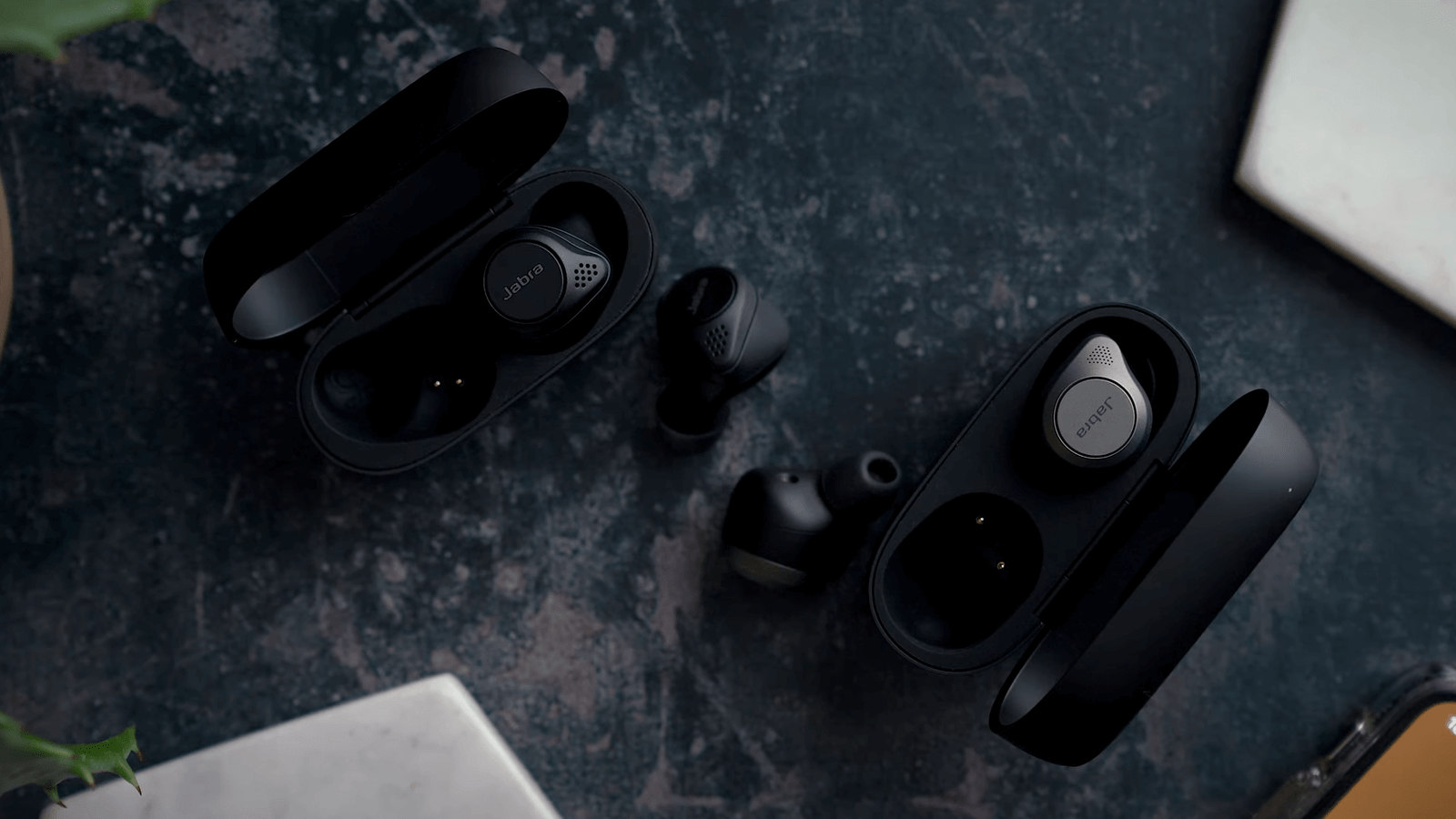 Starting with the Elite 85T Headphones, which from the outset we will tell you are within Jabra’s range of completely wireless headphones, the first thing we see as soon as unboxing is its charging case, which has been made of ABS plastic of good weight and in black with oval contours, its dimensions being 64.8 x 41.1 x 28.5 mm. On the front of it, we find the Jabra logo, under which a led is installed that will be in charge of showing us both the charging status and the flashing situation when we install an update (It blinks purple while updating and turns off when concluding).

The charging connector is located on the rear and is type C. Jabra only includes a cable with a USB type A connector at one end and type C to the charging case. It is understood that today we all have mobile chargers of this type, USB ports on the PC, and much more, so they have preferred to save costs on this component. The Bluetooth technology that they integrate is 5.1 and has a range of approximately 10m or a little less if we have walls in between.

The size of the headset is perfect, neither big nor small, fitting perfectly in our ear thanks to the three-size silicone inserts provided by Jabra, and under which they will adapt to any ear like a glove. We have used them at home, on a motorcycle, and even running and we guarantee that the fit and comfort are perfect. In fact, in the following screenshot, you can see the difference in size (despite the technology they install) compared to Airpods, Bose, or Beats for example. 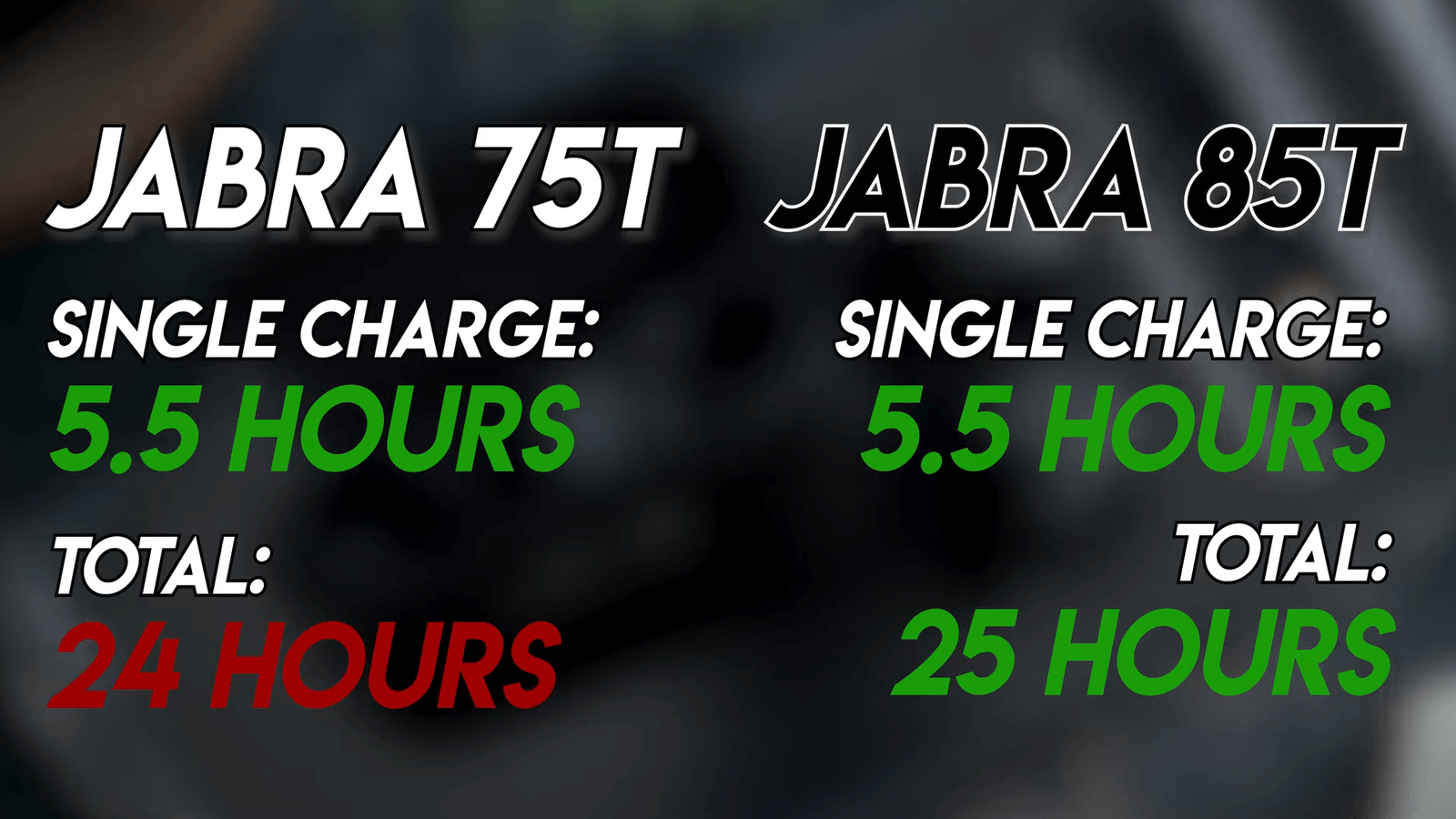 Comparing with the Elite 75t, the cargo box is identical characteristics regarding his older brother the 85t, equally including connector loading at the rear of C type of 30cm in length.

The materials used are also made of PC Plastic and ABS in black, so as we indicated little variation and/or improvement have been applied in this box that already works more than correctly and gives us an autonomy of 5.5h (ANC ) – 18.5h (Housing). Its charging time is obviously somewhat less than the Elite 85t, in this case, half an hour less (3h) since it offers us almost 7h less of total autonomy.

In this case, we are dealing with an open-type headset but whose size is half that of the 85t, in this case, 6mm, integrating 4 microphones (2 Interior + 2 Exterior), 2 per headset, which it uses for noise reduction. outside, using just 2 for the staging of Jabra ANC sound insulation technology. It also includes HearThrough technology that we explained above, so both headphones in this sense are served.

There are many reasons, but among others, we will tell you that the best ergonomics, size, speaker size, state-of-the-art technology with total isolation capacity or to allow us to listen to our surroundings, the possibility of very precisely equalizing treble and bass, geolocation, autonomy … But above all its enormous audio quality in multimedia and in calls.

The Elite 85t are obviously a leap in the quality of materials and finishes over the 75t, as well as having a speaker that doubles in size, drastically improves the depth of the bass and clarity of treble, as well as having a greater technology and microphones installed to enhance even more if possible compared to the 75t in terms of acoustic insulation and improvement in call quality.

Bose QuietComfort Earbuds vs Jabra Elite 85T: Which Should You Buy