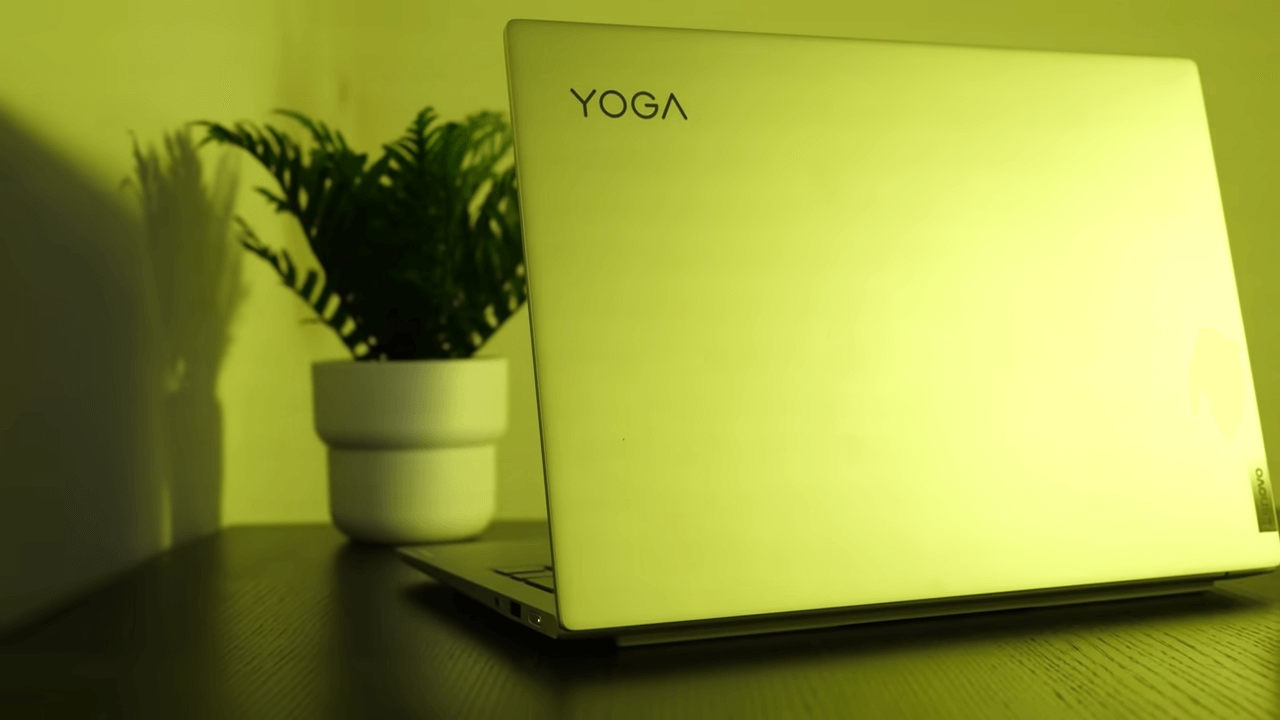 Until recently, the Yoga line was limited to convertible touchscreens. Lenovo has now expanded the series to include standard form factor devices. The new Yoga Slim 7 Pro is a compact laptop with powerful AMD hardware, a high-quality display, and useful features.

Lenovo has upgraded its Yoga Slim 7 laptop: The Lenovo Yoga Slim 7 Pro is a compact work machine with a 14-inch screen. The AMD Ryzen 7 and Ryzen 9 processors are used in the model. Contrary to what the name suffix “Yoga” suggests, it is not a convertible PC, but a laptop in the style of Ultrabooks. There is no touch screen. We have extensively reviewed the small laptop and show what the device with the Ryzen processor can do in everyday life.

Lenovo resumes its recipe for success with a high-end Yoga Slim 7 Pro. Equipped with one of the best processors of the moment and an Oled screen, it has everything to please on paper.

The Yoga Slim 7 Pro is made entirely of brushed aluminium. The material is pleasant to the touch and does not collect prints. The keys on the keyboard are optimally sized, have two-level white backlighting and are positioned in the correct places, so there is no problem with touch typing. The power key is moved outside the keyboard block to the right end – thus, accidental pressing on it is excluded. The large touchpad turned out to be convenient as well, which instantly responds to pressing and gestures. 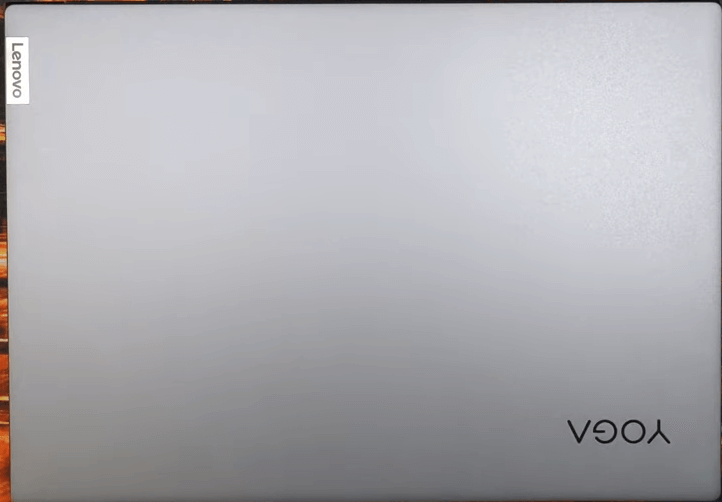 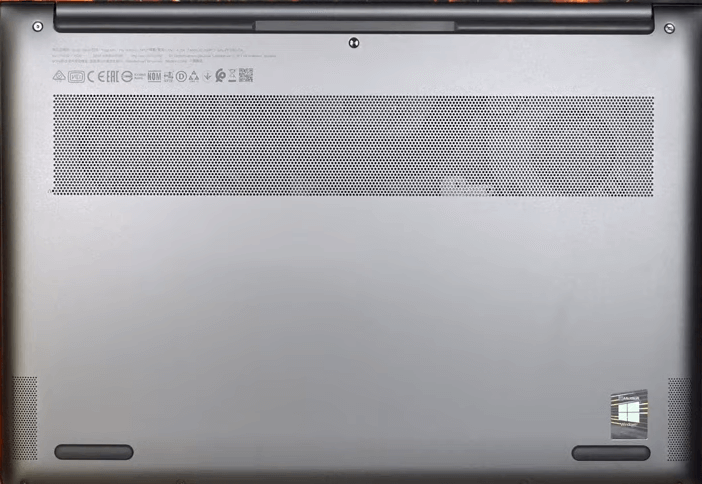 On the laptop’s bottom, rubber feet are placed, slightly raising the gadget above the surface. This is necessary for the efficient operation of the cooling system, which draws air from under the laptop. By the way, it is in the ​​ventilation openings that the device’s body noticeably loses. Airflow of the components is realized with the help of two coolers. Their noise is almost inaudible; however, at maximum loads, they loudly remind themselves.

The Yoga Slim 7 Pro is equipped with a 14-inch IPS panel with a resolution of 2880×1800 and an aspect ratio of 16:10. The display has a glossy finish with good anti-reflective properties and wide viewing angles. The scanning frequency of the matrix is ​​90 Hz, due to which the Windows OS interface pleases with smoothness. 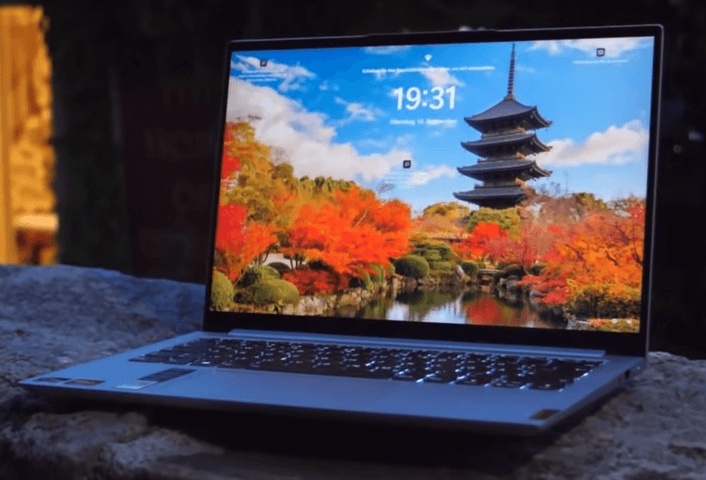 The thin bezels on the sides of the screen and its high brightness (400 nits) are also commendable, allowing you to work outdoors without problems. An infrared camera was hidden in a small ledge on top to recognise the owner’s face in complete darkness instantly. True, there is no physical curtain to close it.

The Yoga Slim 7 Pro is equipped with an AMD Ryzen 7 5800H processor with integrated Radeon Graphics. The chipset is an eight-core solution based on 7-nanometer process technology. Our copy received 16 GB of unsoldered DDR4 RAM and a fast 1 TB NVMe M.2 SSD. The latter is easy to replace with a more spacious drive. To do this, unscrew 7 bolts from the bottom of the gadget and carefully remove the aluminium cover.

The configuration is enough for the fast operation of the system and most of the programs necessary for an ordinary user. The entire interface renders smoothly with a 90Hz refresh rate. Another plus is support for the sixth-generation Wi-Fi standard, which provides a stable and fast Internet connection. The modest set of ports, consisting of two USB Type-C, one Type-A and an audio jack.

The Lenovo Yoga Slim 7 Pro performed all tasks very quickly in the test: from running typical office programs to the exhausting photo, video and 3D editing. During intensive use, the back of the notebook only heated up by 20.2 degrees (difference to the ambient temperature).

If you prefer to gamble with your notebook rather than work, you should keep your hands off the Slim 7 Pro. The integrated Radeon Vega graphics chip AMD’s Cezanne range doesn’t have a lot of power. Games in full HD resolution (1920×1080 pixels) ran very jerkily with an average of 16 frames per second (fps) across the screen. A real gaming notebook is the better choice for playing complex games.

Games aside, media consumption is not a problem, even if the fans have to work a little extra. We have a 2.8K IPS screen that we measure up to 343 nits at the brightest mode to enjoy media. It’s not a shame, and as expected from an IPS screen, the Yoga Slim 7 Pro is good in all viewing angles and the outdoor environment. The screen supports a 60 Hz and a 90 Hz mode. What we do not raise the flag for is colour reproduction. It’s not cash, but we had avoided professional and colour-sensitive image and video work.

Despite the thin case, many connections have found places on the notebook’s sides, including a headset socket. Also on board: a USB 3.2 connection of the classic type A and two of the compact type C design. Lenovo supports power supply and DisplayPort via USB-C. There is no HDMI connection and memory card reader.

The speakers on the Slim 7 Pro are placed at the bottom. There are small discreet grilles in the two front corners of the bottom. The sound from the speakers delivers a well-balanced sound experience that does not struggle in the frequencies we test, from deep bass to high notes, not to mention everything in between. It is worth mentioning that we experience the speaker solution as best directly on hard surfaces such as wooden desks. If we instead have a desk mat underneath, we do not get the same experience.

There is an HD camera in a protruding flap in the lower layer in terms of image quality. We need to supplement with good lighting to get a reasonably good picture. We believe that the camera is good enough, for now, typical video conferences in both work and family contact in office light. Positive is the support for Windows Hello, and we have not had any difficulty quickly and easily unlocking the computer in poor lighting. The two built-in microphones work well for video calls and perform as expected regarding the computer’s price tag.

The keys have a simple, left-aligned font. That was probably the idea anyway. We bother about how manufacturers are inconsistent or forget to complete details. Everything is left-aligned for the alphanumeric keys and the modification keys, except for six keys. Lenovo has chosen to centre the Windows logo and the left and right arrow keys. If that were not enough, they have also chosen to the right – adjust backspace, Enter and right Shift. We think that these small mistakes do a lot to ruin the overall impression. 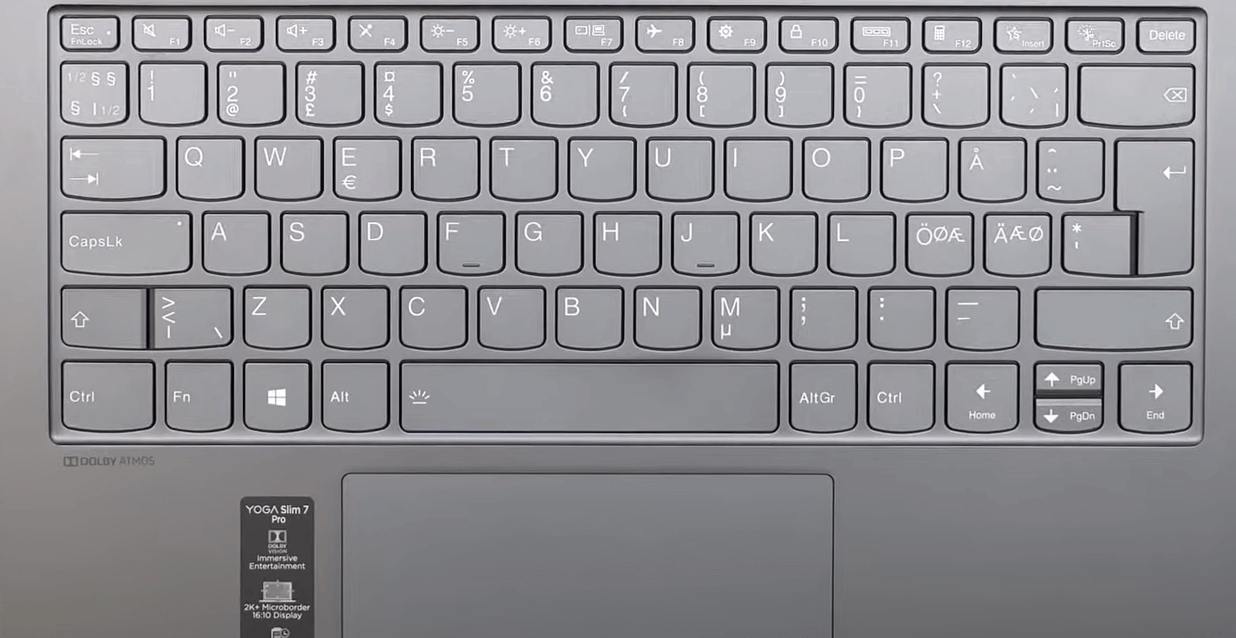 An interesting detail is the shape of the keys. They are oval at the bottom but are otherwise square. Lenovo markets the keys as a dom design that is comfortable for the fingers. We do not think it is more than an attractive detail to the eyes. Otherwise, the shape itself when typing feels just like a keyboard with square keys. The touchpad is okay, but no more. It is inconsistent in the tactile feedback we get when we press on the surface, and so is the sound when pressed. It does its job in terms of touch security but does not impress significantly.

A 61 Wh battery with intensive laptop use (surfing the Internet, editing text and large tables in Microsoft Office) lasts about 4 hours at 90 Hz. In our standard offline Full HD video playback test at medium brightness, the Yoga Slim 7 Pro lasted 12 hours. And if you play FHD videos on YouTube, the battery will last for 9.5 hours. In other words, the new product demonstrates everyday battery life for its class.

The battery life is sufficient to handle a working day calibrated to 200 nits. The PCMark 10 test suite reaches up to ten hours in the Modern Office test.

This is roughly equivalent to the battery life we ​​get if we sit and waste surfing, working in spreadsheets and streaming video. If, on the other hand, we try to do a little more graphics-driven activities on the computer, we can, in addition to unpleasant heat, expect more than half the battery life.

The Lenovo Yoga Slim 7 Pro is a comfortable laptop with balanced performance. Of the significant shortcomings of the model, we will single out only a modest set of ports. But the device has much more advantages. Among them, we note a productive chipset from AMD of the latest generation, a clear and bright display with a scan of 90 Hz, a decent amount of RAM and permanent memory, as well as a lot of software chips.