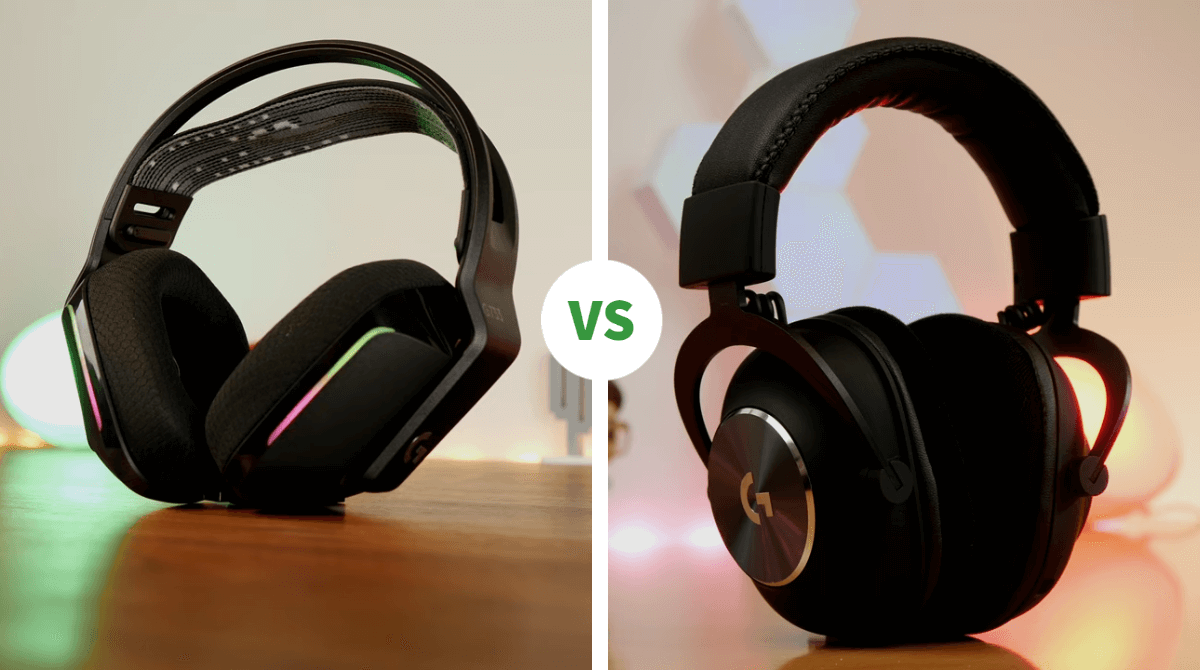 In the middle price segment of Logitech headsets, an update has been pending for a long time. Now it has arrived. The Logitech G733 wants to attract attention. With bright colors, front-facing RGB lighting, and a detachable microphone, it is a perfect option for streamers – also in terms of sound. 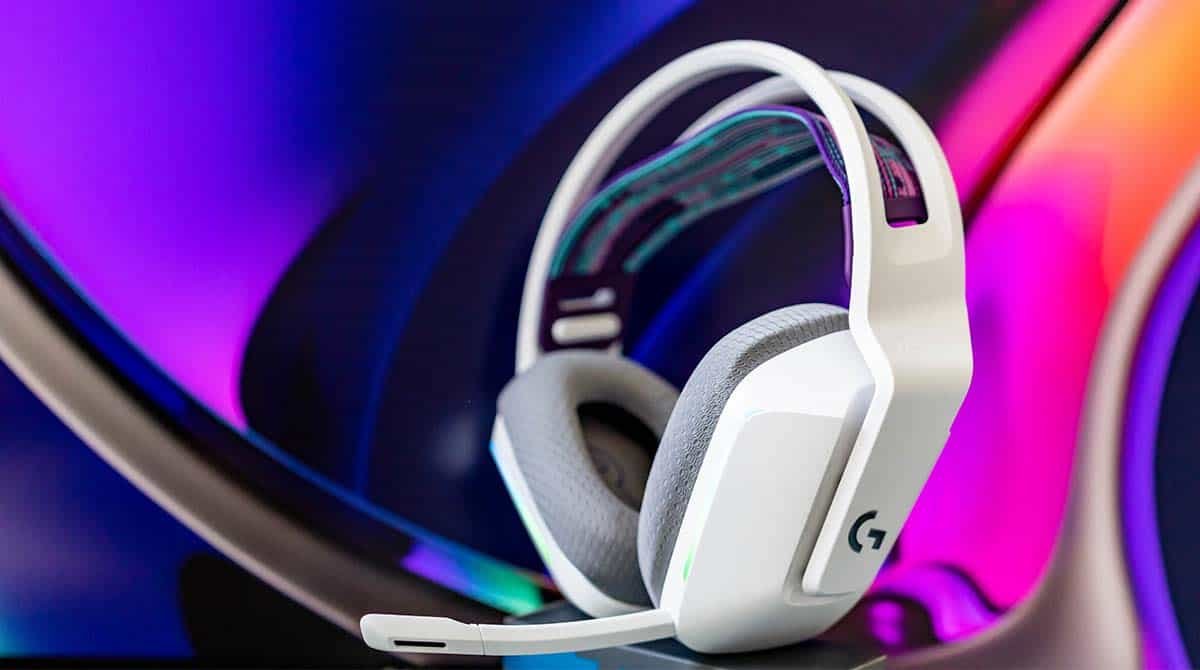 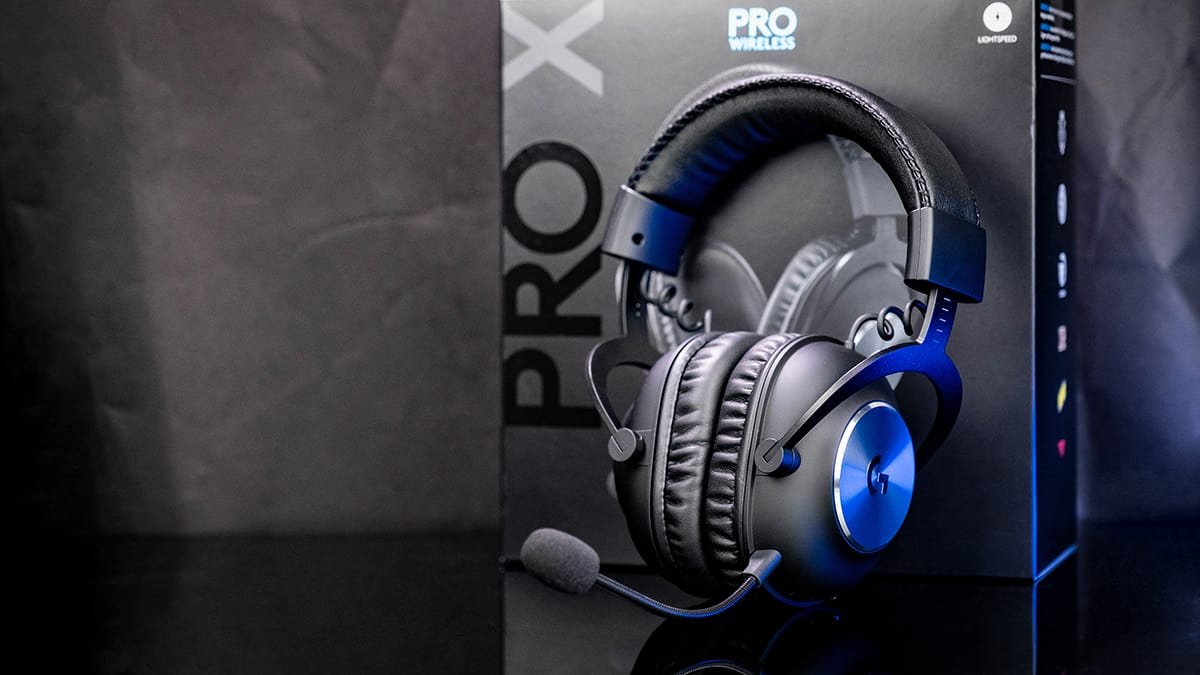 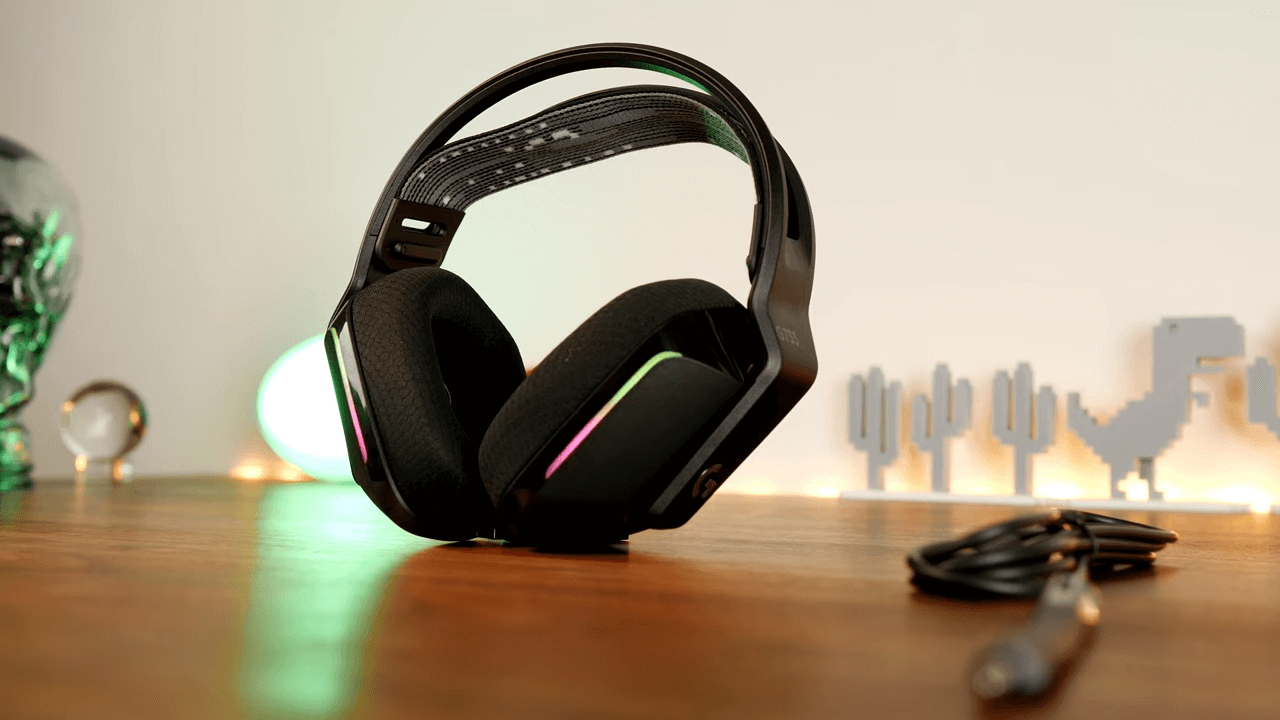 The Logitech G733 is available in white, blue, purple, and black. The purple version, in particular, is a real eye-catcher. The design is slightly futuristic. Large angles, slightly shimmering white plastic, and the two RGB bars on the front make it clear that the Logitech G733 is a gaming headset.

That is not meant negatively. The design is definitely a matter of taste, and some gamers will prefer a sleek look, but that doesn’t mean the Logitech G733 is a toy – quite the contrary.  The LEDs are bright, but there are few on the front of the Logitech G733. Unfortunately, the Logitech G733 doesn’t fold.

The Logitech G733’s strap feels comfortable even after long gaming sessions. He also ensures that the headset feels very light on the head. Even lighter than it already is with its 285g (without mic).

The earpads are made of a mesh material. This allows the skin to breathe better, and the build-up of heat in summer is reduced to a minimum. There is also enough space in the padding of the Logitech G733 for big ears. The pads can also be changed, but Logitech does not sell replacements itself. Interested parties have to look around at third-party providers.

Together with the good contact pressure, the over-ear design ensures that the Logitech G733 offers natural noise suppression. Since there is no ANC on the headset. 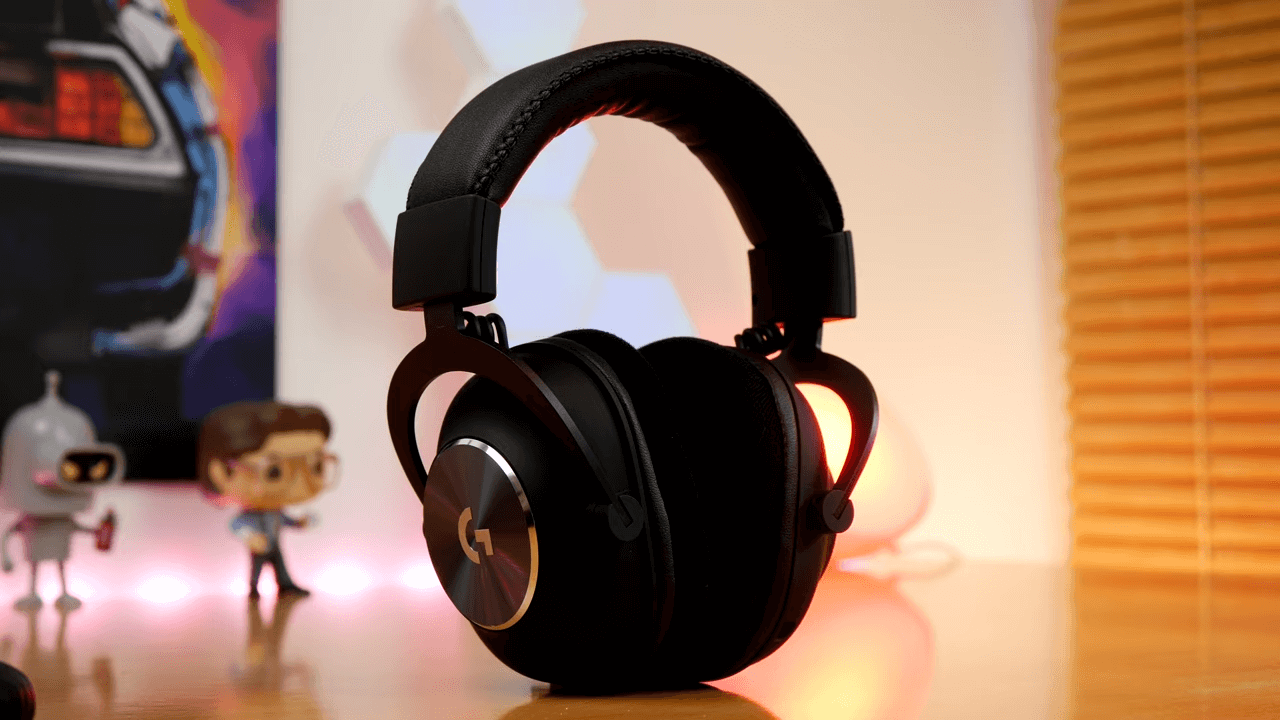 The Pro X Wireless – there is still potential for optimization in the naming of each other – does a lot, unlike the previous spearhead. The new positioning mainly falls victim to the high proportion of plastic and high-gloss finish and the RGB lighting of the classics. Instead, there is more metal and an amazingly high-quality appearance, which is more the exception than the rule with gaming headsets.

The gaming headset should, of course, not only score points in terms of appearance. Logitech is also promoting it with the delay-free Lightspeed radio connection, large 50mm drivers, DTS headphone: X-2.0 support, and the integration of Logitech’s in-house Blue VO! CE software.

Let’s get to the design that, without RGB lighting and high-gloss plastic surfaces, does not fit a gaming headset at all. Similar to Corsair, Logitech relies on a high-quality mix of materials for the Virtuoso RGB Wireless SE.

Thanks to aluminum surfaces with a ring pattern, the ear cups are very chic and classy. Matt black plastic elements, which are very solid and resistant to fingerprints, also ensure sufficient stability. The robust headband and joints made of metal go well with this.

The Pro X Wireless uses soft synthetic leather on the headband for the upholstery, which is set off with black decorative stitching. Artificial leather is also used on ear pads. Since artificial leather shields well but is not breathable, you can use the fabric alternative included in the delivery scope on hot summer days.

Overall, the Pro X Wireless is very high quality and stable. There is no reason for criticism since everything fits as it should. Thanks to the detachable microphone, the headset would be suitable for everyday companions but cannot fold compactly.

The Logitech G733 headset should last a total of 29 hours of battery life without RGB lighting, and in practice, it almost has that. At about half the volume, it was over after a little over 28 hours. If you don’t want to do without the colored lights, you can expect 19-20 hours of battery life—both excellent values ​​for a mid-range gaming headset.

The battery life is about 18 to 20 hours, depending on the volume, which is completely acceptable. Charging is finally done via the current USB-C connection, and in an emergency and with a little technical know-how, you can even replace the battery. So, where is the dog buried? Besides the limited connectivity, there really isn’t much to complain about. The headset cannot be folded. Unfortunately, this applies to most gaming headsets. 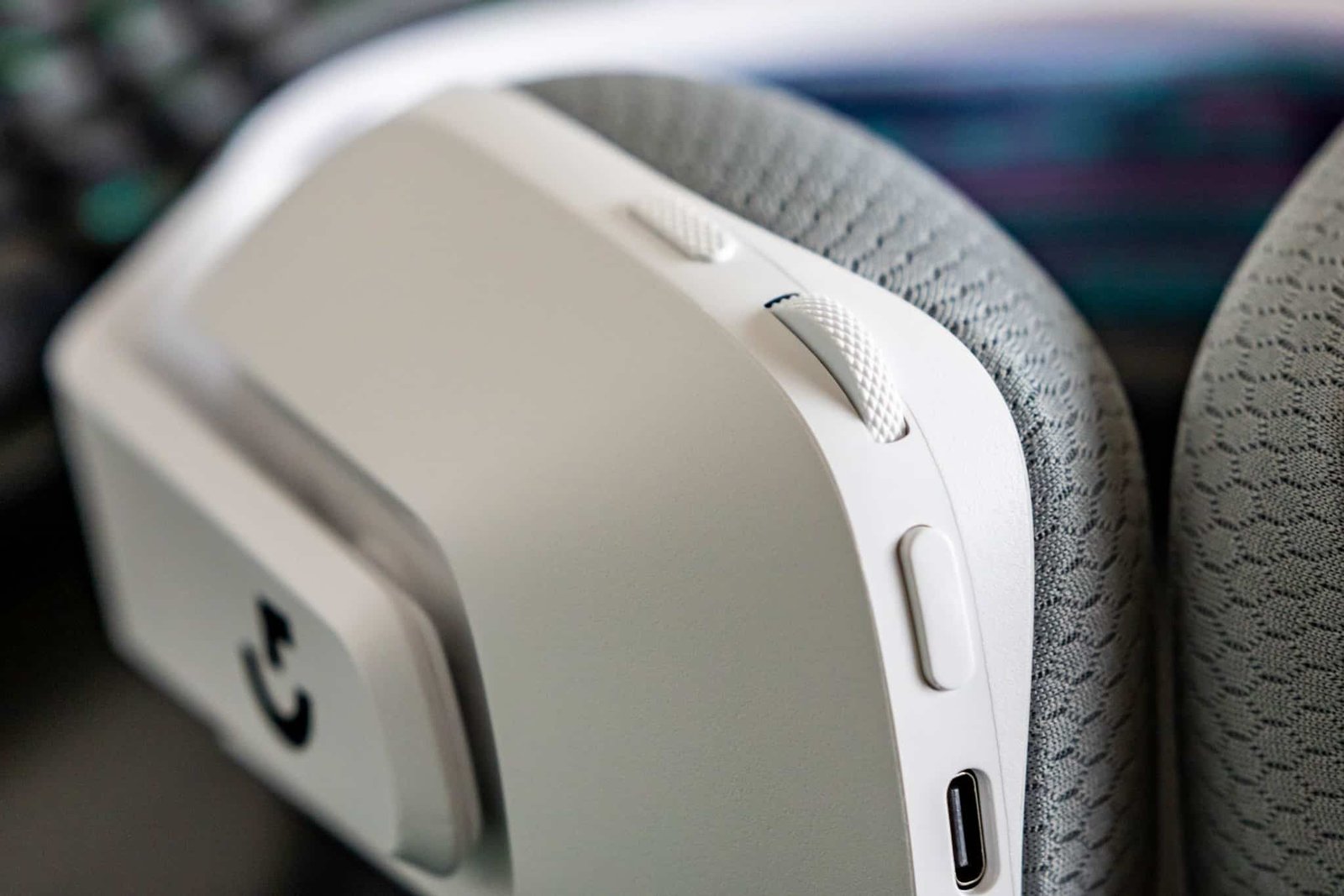 Setting up the Logitech G733 is pretty straightforward as it is primarily intended for use on a PC. Plug the supplied dongle into a free USB-A port, and Windows will do the rest – plug and play. The Logitech G733 also works on a PlayStation 5 or a Nintendo Switch if it is in the dock.

Unfortunately, there is no wired solution for the headset. Even if the microphone of the Logitech G733 is connected via a jack connection, it can make no connection via the port on the headset. Logitech relies exclusively on its Lightspeed technology.

With the Lightspeed, Logitech describes its wireless connection, which is characterized by its high transmission speed. The range of the Logitech G733 is imposing, thanks to Lightspeed. After looking at the outside of the headset, putting it on, and connecting to the computer, it may be time to install the Logitech G Hub. The program is not necessary for the basic functions of the Logitech G733. 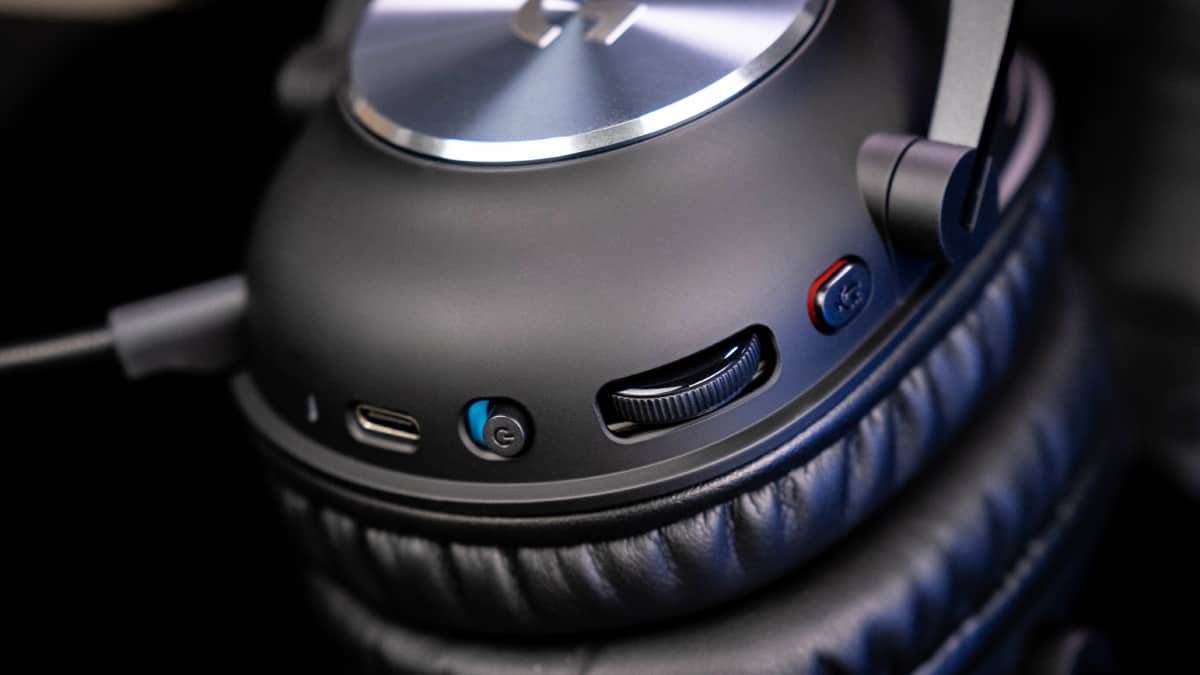 Unfortunately, the lack of a jack connection speaks against its use as a universal headset. The microphone is connected via the jack but cannot use to the connection connect the gaming headset to the smartphone via the jack and listen to music. Since Bluetooth is also not on board, you only have to connect to the PC via the Lightspeed radio receiver. This is no coincidence because the Pro X Wireless is only intended for use on a gaming PC.

Logitech has positioned the controls as well as the USB-C port on the underside of the left auricle. In addition to a power slider, there is also a volume wheel and a button to mute the microphone. Different sounds accompany all commands. The operation works without any problems.

If you are looking for a wireless gaming headset with many functions, clean sound, and good battery life for PC gaming, the Logitech G733 is your next headset. The long answer requires some arrangement.

Gaming has changed a lot in the last 30 years. It has grown from a hobby for basement kids to a billion-dollar industry that even dwarfs the film industry. Today it includes Let’s Plays and Live Streams on Twitch with thousands of people watching a streamer. Sometimes only three hardcore fans are watching, and many streamers also put on a huge show for the three of them to have fun.

The Logitech G733 headset was also developed in line with this trend. With its futuristic design and the colorful lighting on the front, it is an eye-catcher for the audience. On the other hand, the streamer benefits from a high level of comfort, long battery life, and Blue Voice. In addition, the Logitech G733 has almost the same properties as the significantly more expensive Logitech G Pro X (test).

Apart from the mediocre isolation, the Logitech G733 is currently a perfect choice for streamers. But gamers who play without a camera should also keep an eye on the headset.

With the Pro X Wireless, Logitech is taking a huge step forward in the field of in-house gaming headsets. While the G935 with RGB lighting, a retractable microphone, and lots of plastic has so far been the highlight in Logitech’s lineup of gaming headsets, the Pro X Wireless sets new standards. Not only does it appear pleasantly grown-up without high gloss and RGB, but it is also very high-quality and feels thanks to stable materials. Fingerprints are also not an issue, given the matte surfaces.

The wearing comfort is due to the oval and large ear cups with soft cushions and the pull-out and padded headband very high. The well-proportioned contact pressure also ensures a good fit. If you want, you can even exchange the artificial leather ear pads for breathable fabric derivatives, which are included in the scope of delivery.

The headset would be suitable for gaming on the PC and everyday use. The microphone is removable – and also impresses with its impeccable voice quality. The same applies to the balanced sound, which scores in the test with a wide stage for music and perfect spatial representation in games. If you want, you can readjust both the microphone and the sound via the Logitech G Hub, but this is not really necessary. The software is otherwise structured in an exemplary manner and offers many functions.

In my opinion, the Logitech Pro X Wireless is a great gaming headset for PC gamers who have the necessary change.