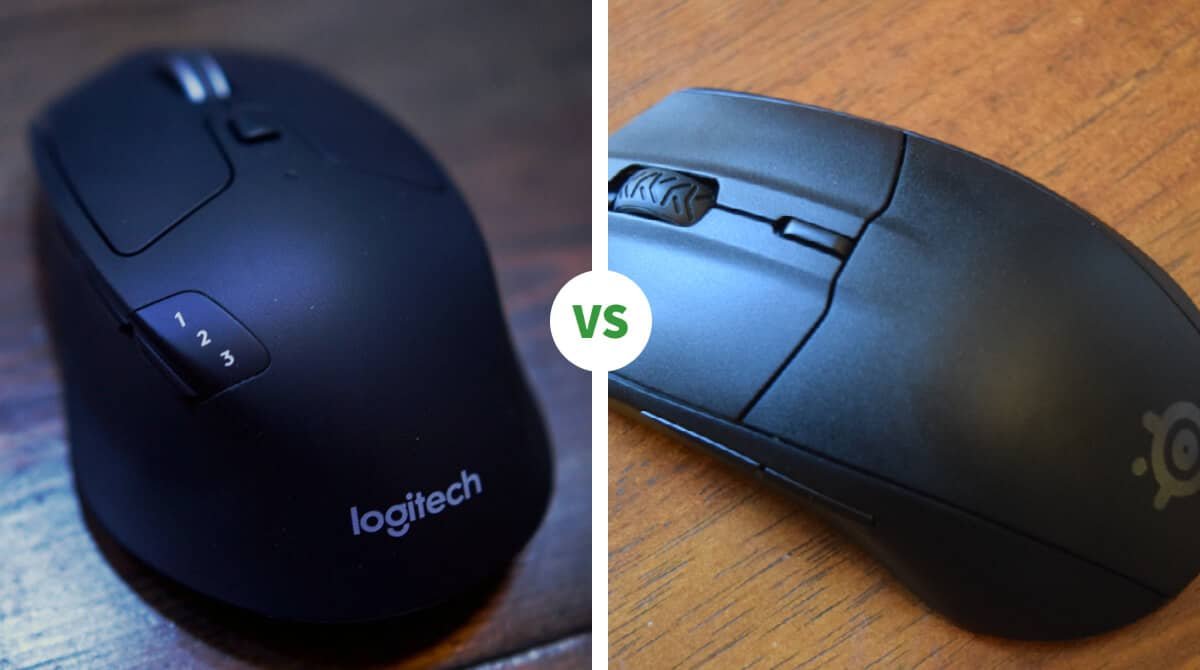 The Triathlon M720 does not impress with its packaging, which resembles the equipment straight from supermarkets, packed in transparent plastic, and probably not less environmentally harmful cardboard. Logitech tried to get a pre-cut plastic that can tear off. So it’s easy to get to the mouse, USB receiver, and documentation while one AA battery is already in the mouse.

The Prime Mouse comes to us in a newly designed box, which immediately reveals its appearance and the characteristic orange of Steelseries. The box itself is even motivating, and congratulations on a great choice. We are informed not only that professional players with Steelseries gear have won more cash prizes than those who do not, but also encouraged to destroy virtual enemies with the slogan “for glory.” 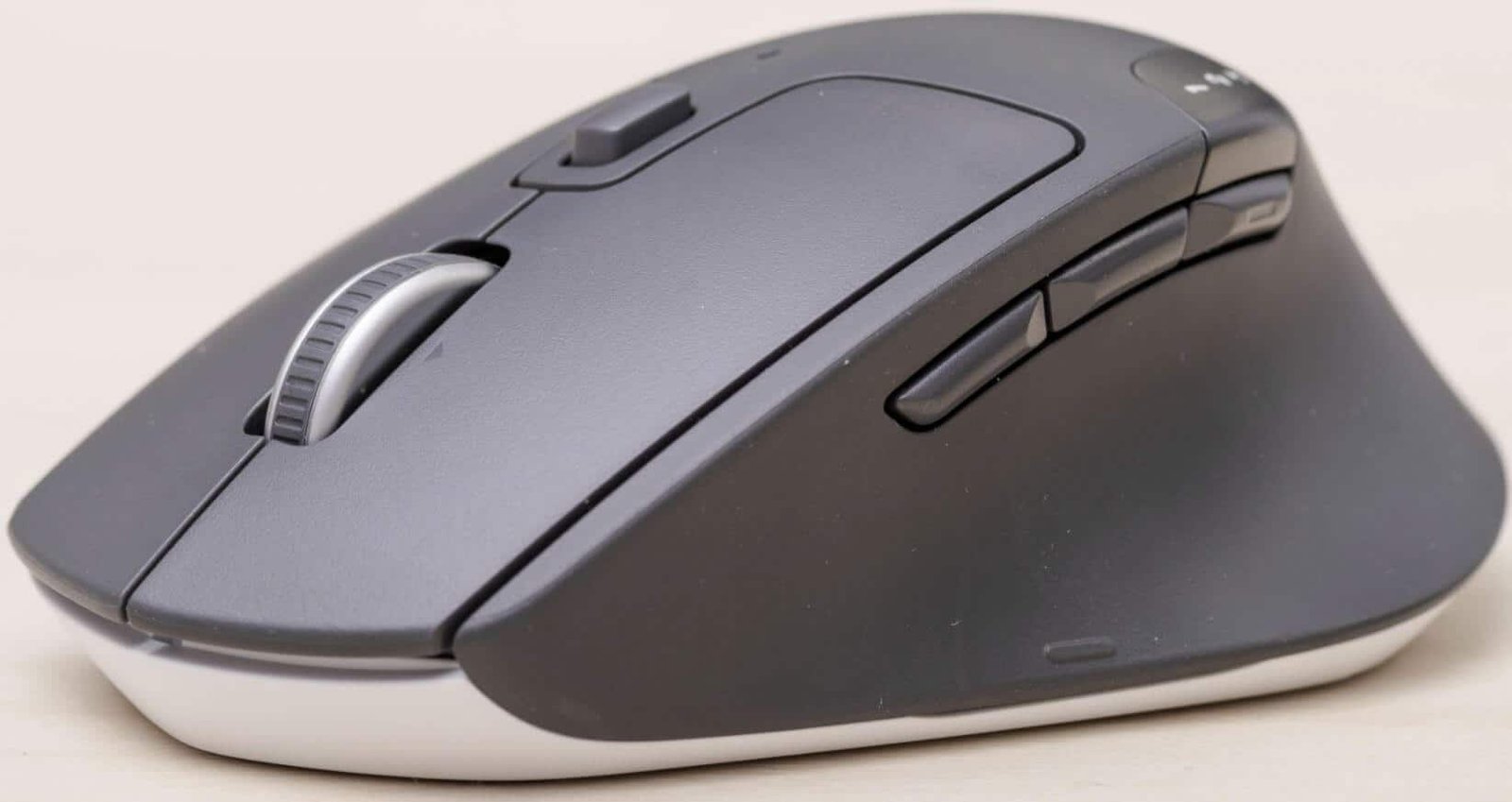 At first glance, the Triathlon M720 evidently resembles an office mouse. Modern, interesting, but traditional in its own way. This visual envelope is emphasized by the combination of a graphite body with a white base. At the same time, it offers what is most important, i.e., outstanding support for the palm of the palm, pleasant to the touch material with hard rubber in the lead role, three sliders that are hard to complain about, quiet and pleasant main buttons and a special metal Logitech roller with a rubber insert with two operating modes. 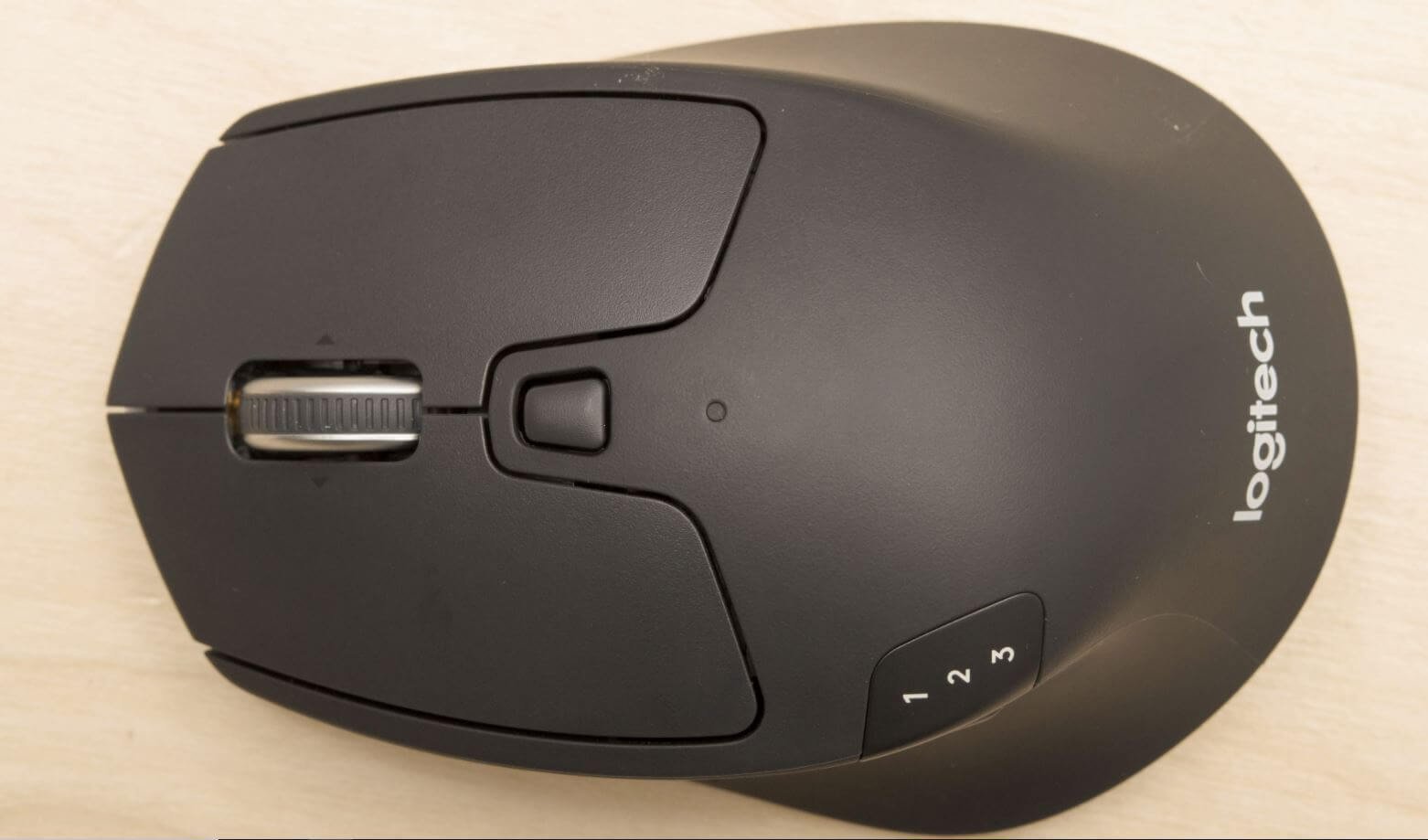 The most important distinguishing feature of this mouse is three, not two, side buttons, of which the additional one is directly attached to the illuminated numbers 1-3. But more on that in a moment, because it is related to the functionality of the M720 itself. In terms of physicality, it is worth mentioning that on the bottom, there is a sensor gap, an on / off switch, and a simple plug, under which there is a place for the Unifying USB receiver and one AA battery. This one should be enough for two years of using the mouse. 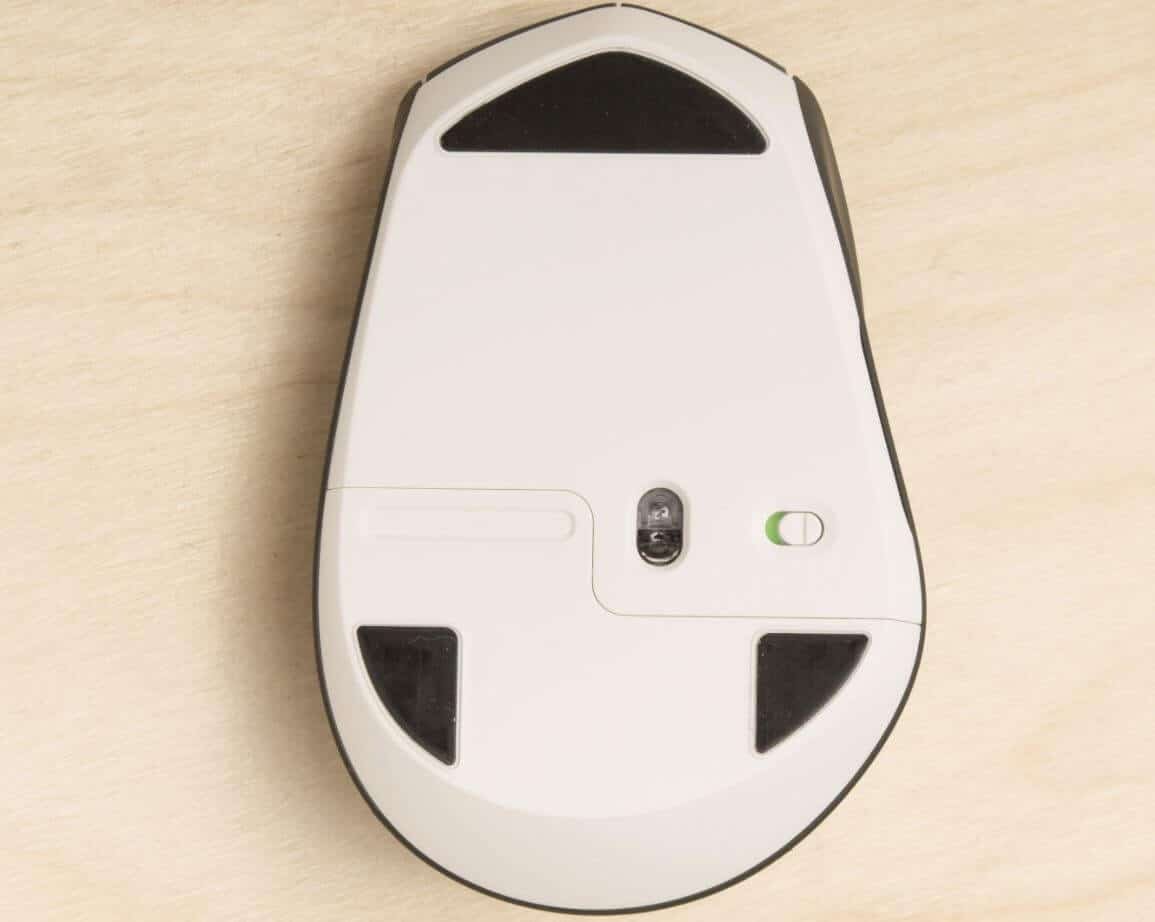 Connecting this Logitech mouse to your hardware is simple as long as you have access to a single USB-A port or Bluetooth connectivity. In the first case, you plug the receiver into the computer and turn on the mouse, and in the second, after turning it on, your search for an appropriate item on the list of available devices. In both cases, the connection is secure and does not “break” but quickly “catches” after a long absence.

Although the M720 is comfortable in itself, it weighs its own, as it is a whole 135 grams, and a significant part of this weight falls on the back. Fortunately, it glides smoothly on the mousepad or the desk, but it is definitely not the king of low weight, which you have to judge for problematic yourself. 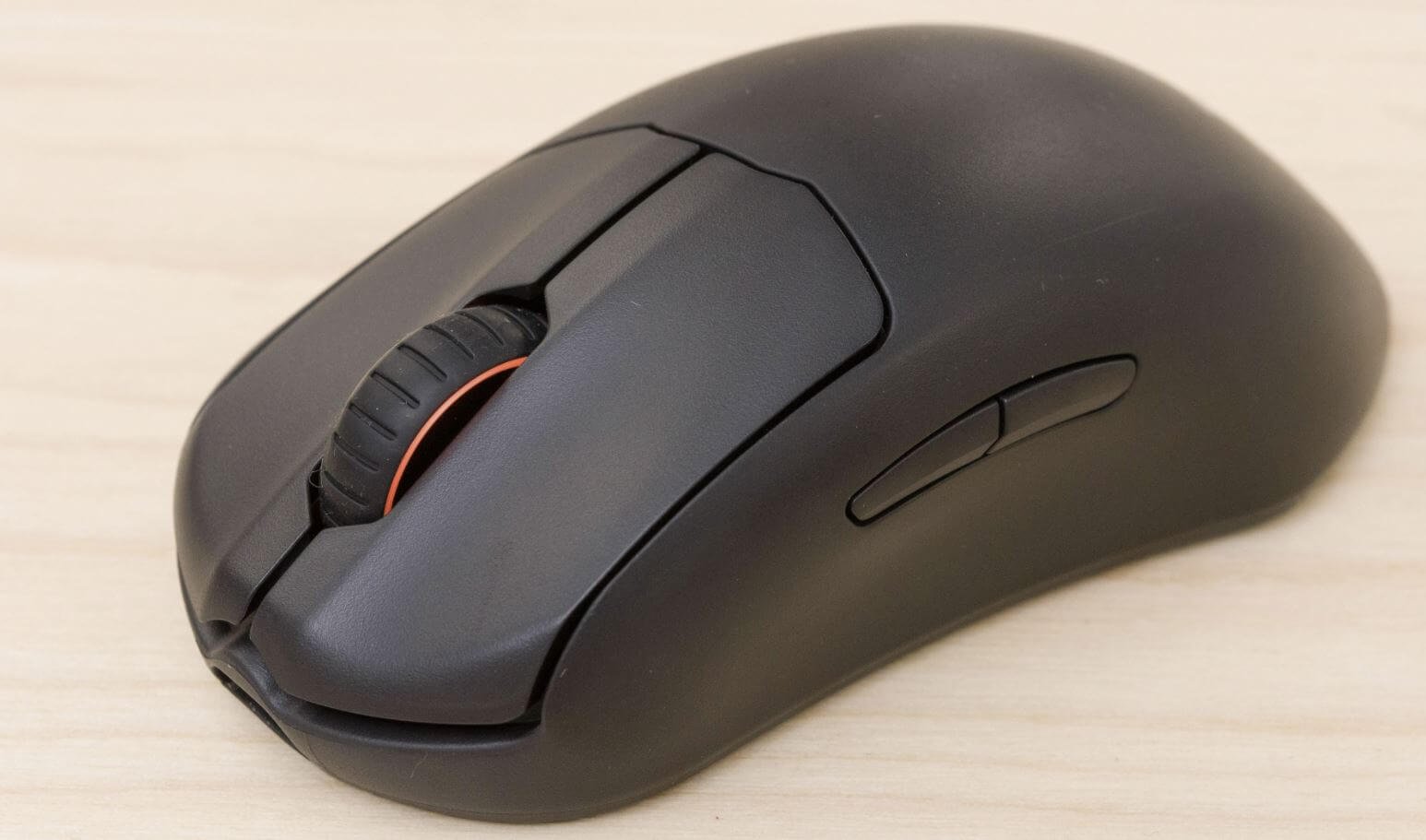 Steelseries in the Prime models, which suggests high quality and focuses on the most important things, has chosen a strategy that is good for my eye and taste. Instead of going crazy with the design, the manufacturer focused on simplicity. Instead of standing out from the competition with its appearance, he resorted to minimalism, and finally, to explain such a high price, Prime tried to achieve great performance and low weight.

The Prime weighs only 69 grams (without the cable), which is an almost elite segment, especially due to the full housing, not the “punched” one. Although it may seem that something like this will impact the quality of the design, you can rest easy about this. Steelseries took more care of light but non-flexing plastic with a matte finish.

The Prime housing almost gives the impression of a two-piece body (base + body), but it is enough to take a closer look to see the already carefully hidden connections of the side panels with the top one. These, however, are imperceptible at all, and throwing them does not cause any creaks or creaks. 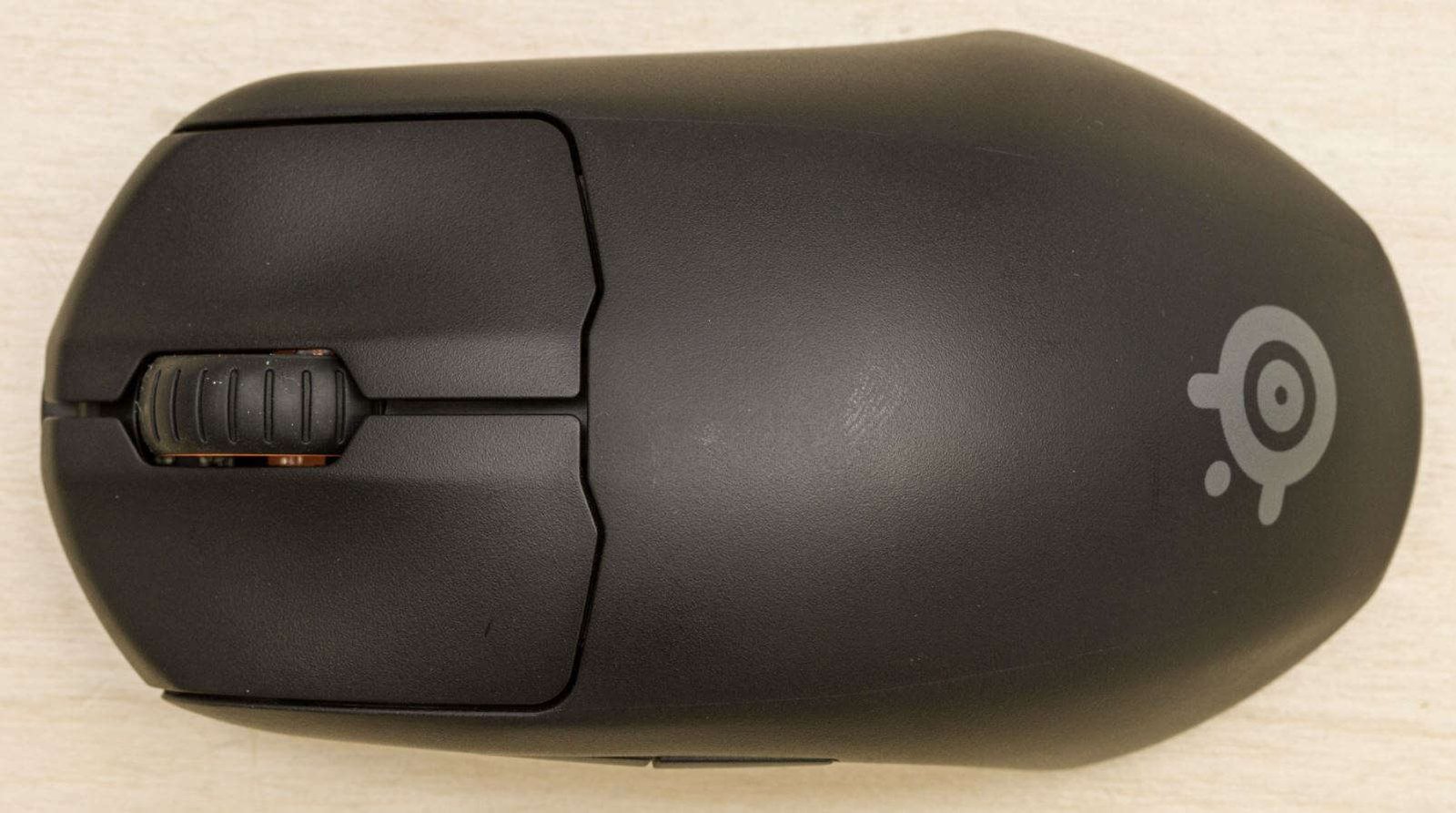 The mouse is kept simple thanks to a thick rubber insert on the roller, a gray manufacturer’s logo on the spine, and two small side buttons. On the front, there is a USB-C port for a detachable cable with a special reinforcement, which stays firmly in place even with considerable force, thanks to a large block that locks the whole thing in the recess. 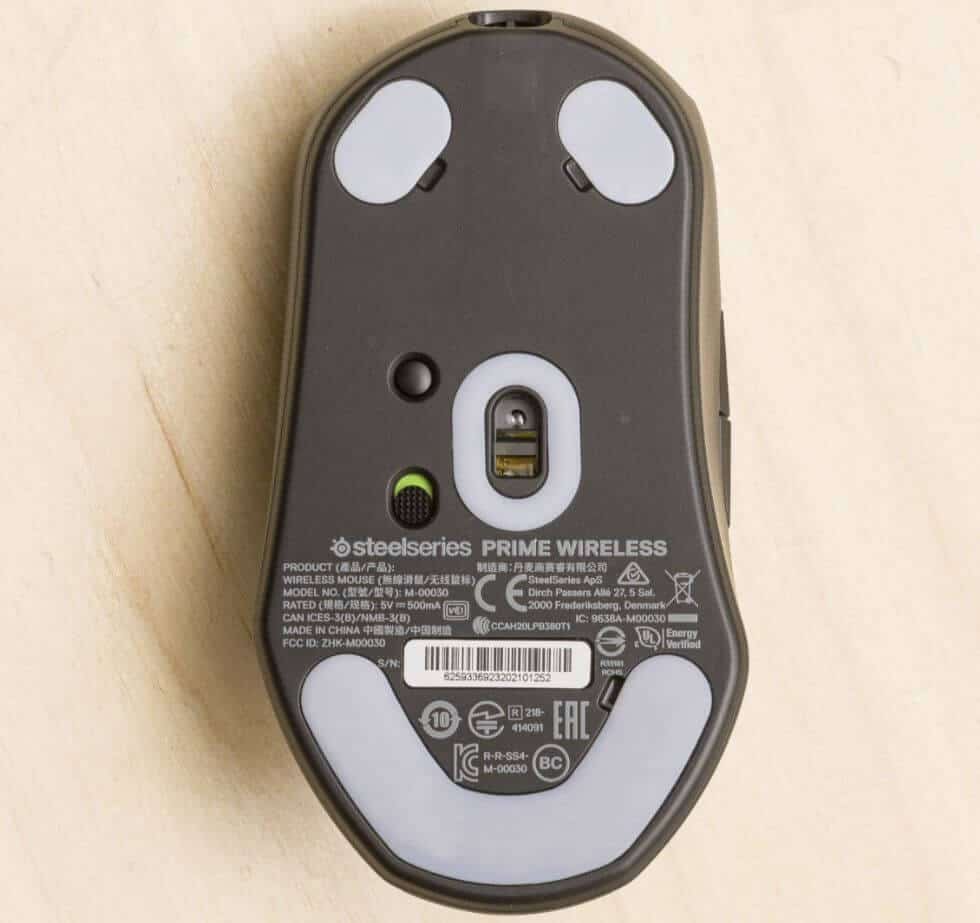 There may be one surprise on the bottom of the Prime mouse because next to four great sliders with rounded edges and, of course, the sensor cavity, there is a button there. we can change both the sensitivity on five predefined settings and the USB refresh (125, 250, 500, 1000 Hz). So it is a replacement for the button that is usually located above the reel, which allowed to keep the look simpler. Still, on the other hand, it disabled its standard function for those who change sensitivity during gameplay regularly. 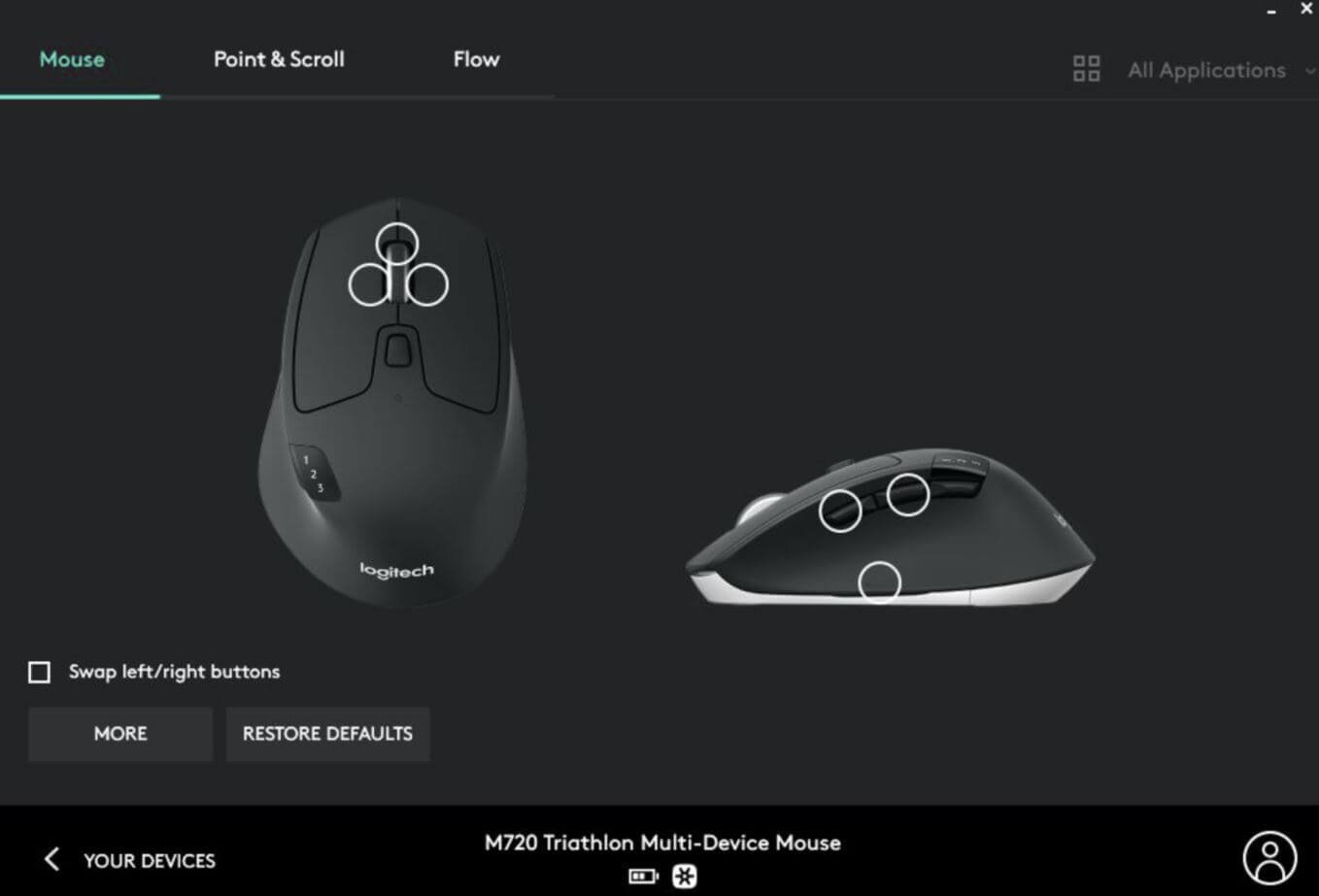 It is worth mentioning that it cannot overwrite all these functions in the Logitech Options software. There, in addition, we will configure Logitech Flow, i.e., technology referring to the aforementioned numbers 1-3, which allows us not only to simultaneously connect the Triathlon M720 with three computers via Bluetooth Low Energy or receivers (you can freely mix) but also quickly jump between with them after one press of this additional button.

In addition, Logitech Flow allows us to juggle files or copied text between our devices after the appropriate configuration of the equipment. But don’t think that this data is magically stored in the mouse – it’s just that network connectivity is used for this juggling.

Returning to the application itself, which you can, but do not have to download, to use the Triathlon M720, you will suspect the estimated battery level in it (the LED at the top of the mouse will also let you know about its low level) and set the sensitivity of the sensor “on the eye” because simply within a simple slider. Unfortunately, you cannot count on high precision, as this is not available even in the middle of the sensitivity (from 200 to 1600 DPI). Interpolation sneaks into the sensor’s operation relentlessly, and the 125-Hz refreshing cannot provide a good, responsive feeling.

Of course, if you are not particularly demanding, you will not even pay attention to it, but you have to remember that the M720 is not a gaming mouse or exact work. The only advantage of its sensor comes down to its compatibility with many surfaces and the lack of “random variation.” 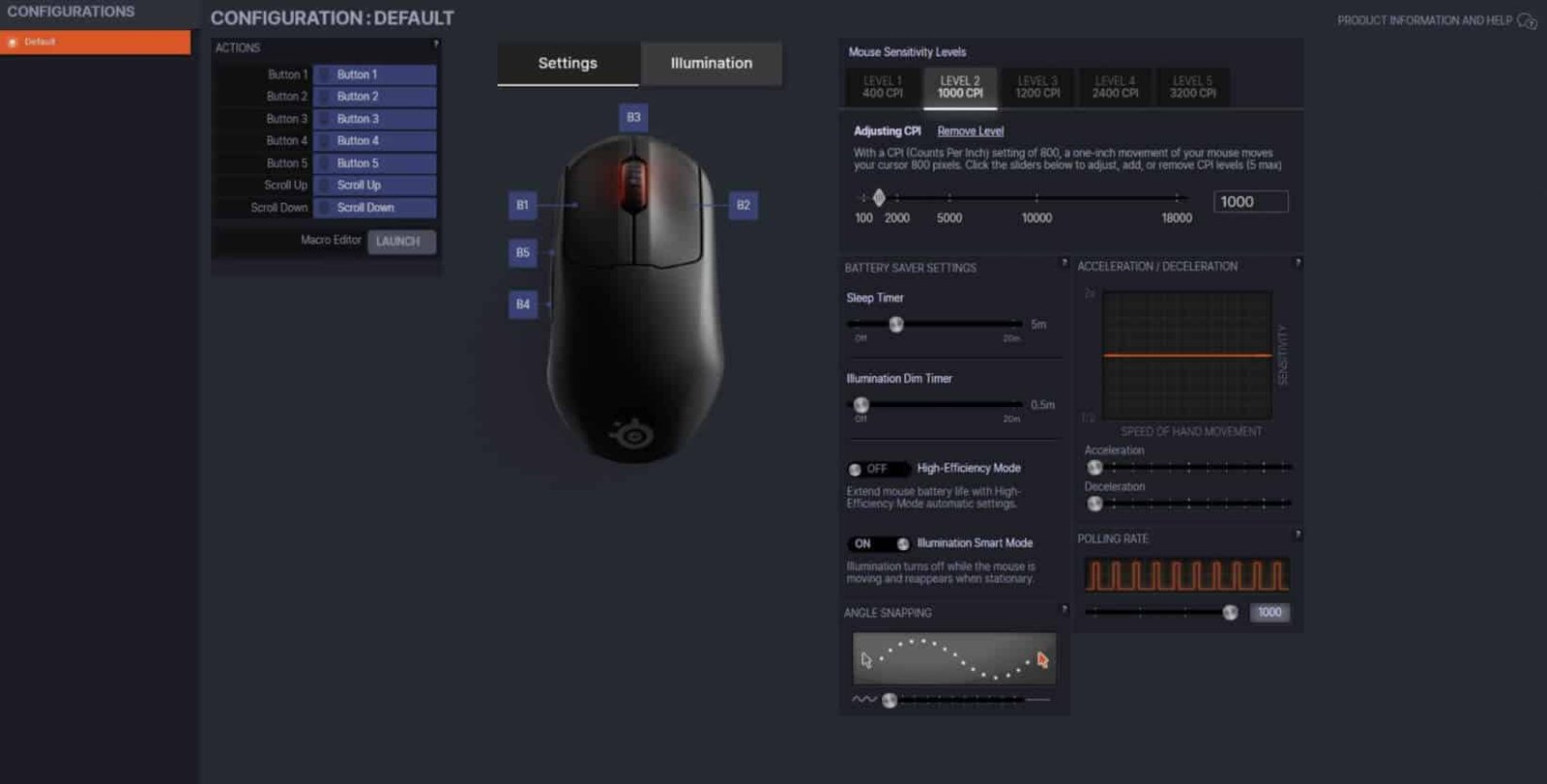 The manufacturer advertises the Prime model as a mouse for professional players, which emphasizes a detachable cable, built-in memory, and the ability to set DPI and refresh rate using the buttons on the bottom. Those willing, however, can reach for Steelseries GG, which is a specific HUB for brand equipment, allowing us to update the firmware, attach profiles to individual games and position the mouse perfectly “under us.”

Above, you can see the options for replacing the button functions, recording macros, setting the DPI level from 50 to 18,000 units, refreshing on traditional ceilings, but also the intensity of prediction and increasing and reducing the speed of the sensor in the first and last phases of mouse movement.

As for the backlight, it is difficult to write down because it comes down to only two modest stripes on a roll. These are backlit with bright, color-mapping LEDs (diode?) That can shine with different colors in constant, color change, and multi-color breathing mode.

Logitech M720 Triathlon- For a mouse that would use for simple office work with such precision, it is a good 200 zlotys too much. However, the amount is definitely adequate for a mouse whose potential you will be able to use (you work on several devices at the same time, do you love keyboard shortcuts).

Especially that we will also provide a respite for our hands, in the set, we will find a battery that we will be able to forget for two years, and we will enjoy the wireless mode with both the USB receiver and the Bluetooth module.

Steelseries Prime Wireless- The most common complaint against the Prime models is their price and alleged low performance, but to be honest. Prime is an inconspicuous mouse that has gone into minimalism, great made, new switches, lightness, modest backlight, and above all, a design that does not reveal that such an expensive mouse is at stake here. Of course, it would be nice if Steelseries dropped the price of at least the base model with these five nozzles to silence the slightly squeezing noses.