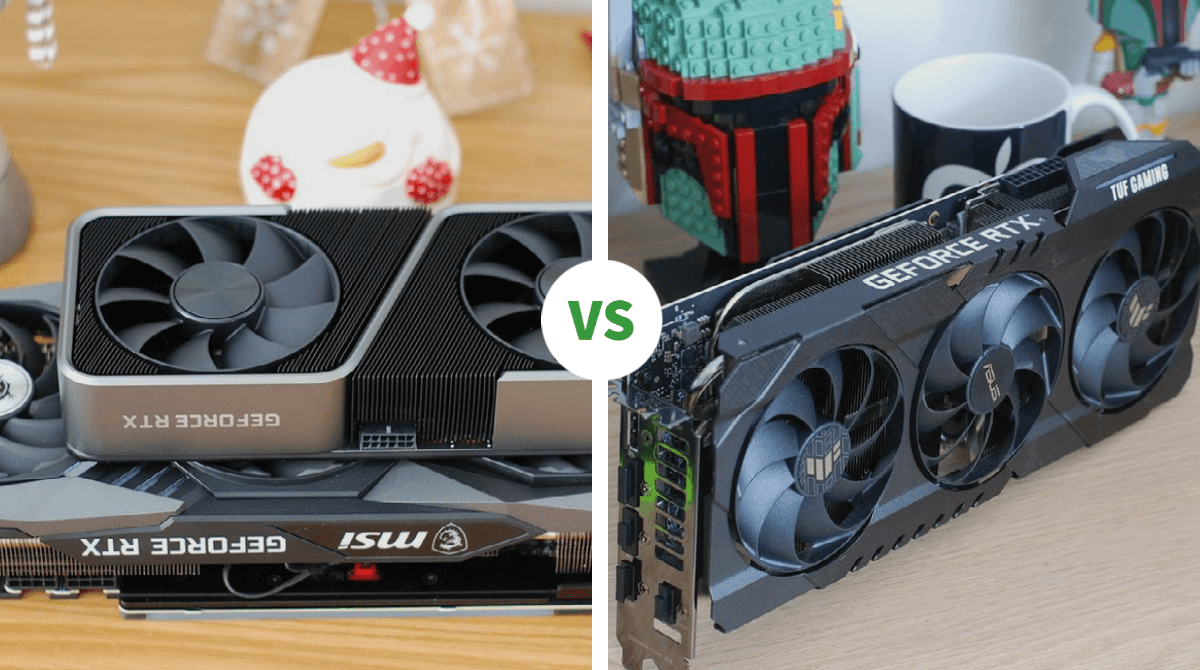 MSI flaunts its expertise in its GeForce RTX 3070 Gaming X Trio. An imposing graphics card intends to silently control the powerful GPU of Nvidia while offering a successful design and a worked lighting system.

A long-standing partner of Nvidia, Asus is taking advantage of the GeForce RTX 30 to offer its custom versions. The GeForce TUF RTX 3080 Gaming graphics card is the brand’s most affordable solution.

The graphics card comes with various quick start guides and a bracket to prevent twisting of the graphics card. The warranty is only 2 years, which we find a bit poor for a high-end model.

MSI’s Gaming X Trio series are premium graphics cards. Everything is studied without concession – the price is also without concession – to bring out all the quintessence of a GPU, that of the GeForce RTX 3070 in this case. This requires a well-designed cooling system, a lighting system suitable for multiple installations, and a sufficiently sturdy power supply to control the GPU and allow manual overclocking.

While the GPU used isn’t the fastest in the RTX 30 series, MSI doesn’t skimp on the size of its graphics card. With its 32 cm long, it requires a large case to accommodate it without hindrance, especially since it is also taller than a conventional graphics card, exceeding the mounting bracket by 4 cm. It also occupies not 2 but 2.5 slots in thickness. All this comes with a weight that is also substantial (1.4 kg). The finish is pretty decent, even if the manufacturer only uses plastic for the casing that adorns the card.

Asus strongly supports its communication around its series of Strix graphics cards, and it also offers a less upscale series under the name TUF. The GeForce RUF RTX 3080 O10G Gaming is one of them. It displays all the characteristics one would expect from a custom graphics card: factory overclocking of the GPU, a cooling system developed in-house, and, as often on products intended for players, a led lighting system.

The dimensions of the card are fairly standard for a model housing a high-end GPU. 29.5 cm long, it occupies 2.5 PCI slots in thickness and is a little deeper than normal, with a growth of 2.5 cm. It is not a heavyweight (1.4 kg) in the field, but it will be necessary to ensure to fix it securely to the case. The finish is quite good with a fairly sober metal casing.

It is possible to push the cursor a step further by going through manual overclocking – an area that depends a lot on the quality of the chip, variable, and the environment in which the card is housed. We were able to push the GPU to an average frequency of 2050 MHz and, most importantly, increase the video memory from 1750 to 2100 MHz, which is quite remarkable.

Unsurprisingly, MSI is renewing its Zero Frozr system, allowing fans to completely shut off their rotation as soon as the graphics load is low and the GPU is at a fairly low temperature. Completely inaudible at rest, the GeForce RTX 3070 Gaming X Trio is also very discreet in games where only a slight breath is audible. Lovers of quiet PCs can clearly turn to this model, especially since the graphics chip is kept at a temperature of 65 ° C, which is, again, very comfortable.

The cooling system consists of several parts. Asus has taken care of the power stage by arming it with a nickel-plated copper heat pipe that transfers the heat released to an aluminum finned radiator. A welcome original approach has given the high energy demand of the card (340 watts TBP). Two other finned radiators surmount the various memory chips.

The main cooling unit consists of two large finned radiators crossed by six heat pipes, still in nickel-plated copper. The graphics chip is in contact with a plate of the same type as the second part of the power supply stage.

Three 9 cm diameter fans are responsible for pushing air over the assembly to cool it. These fans have a double ball bearing system and have ducted fins. On the other hand, if the central fan rotates clockwise, the other two rotate in the opposite direction. A system that would reduce the turbulence of the three air flows, according to Asus.

Finally, a thick metal plate is positioned at the back ( backplate ). This one is not only decorative. In contact with thermal pads, it also improves the heat dissipation of the graphics card.

Power consumption is a bit higher than on the GeForce RTX 3070 Founders Edition. Nothing prohibitive, we go from an average consumption of 230 watts around 240 watts in this case – in line with the TBP announced by MSI, also 240 watts. It remains contained and in line with the slightly overclocked chip.

The 100 MHz gained on the GPU makes it possible to repeatedly climb up to 5% in games in 4K and 1% on average in 1440p. A small point that does not really change the hierarchy observed so far but allowing gaining a few frames per second welcome in some games.

Power consumption is much higher than that of the GeForce RTX 3080 Founders Edition from Nvidia. On average, 370 watts are drawn by the entire graphics card, with peaks at 375 watts all the same. Fuel efficiency takes a slight hit, being almost 10% lower than the Founders Edition.

Since factory overclocking is quite light, its impact on performance in games is also limited. On average, games run at a 2% higher frame rate than the Founders Edition at 4K definition. Nothing really noticeable in practice.

The MSI GeForce RTX 3070 Gaming X Trio is undeniably a success. This graphics card master the Nvidia GPU perfectly well. The operating frequency is higher than on the Founders Edition, the noise is lower, and all this while keeping the chip at a fairly low temperature. In addition, there is a well-thought-out and successful Led system. An excellent service that comes at a high price.

Asus shows a good part of its know-how with this TUF GeForce RTX 3080 O10G Gaming. Sober-looking, it benefits from a serious construction and a cooling system correctly sized for the particularly energy-consuming GPU of Nvidia. The card operates quietly, and its frequencies are both high and stable.