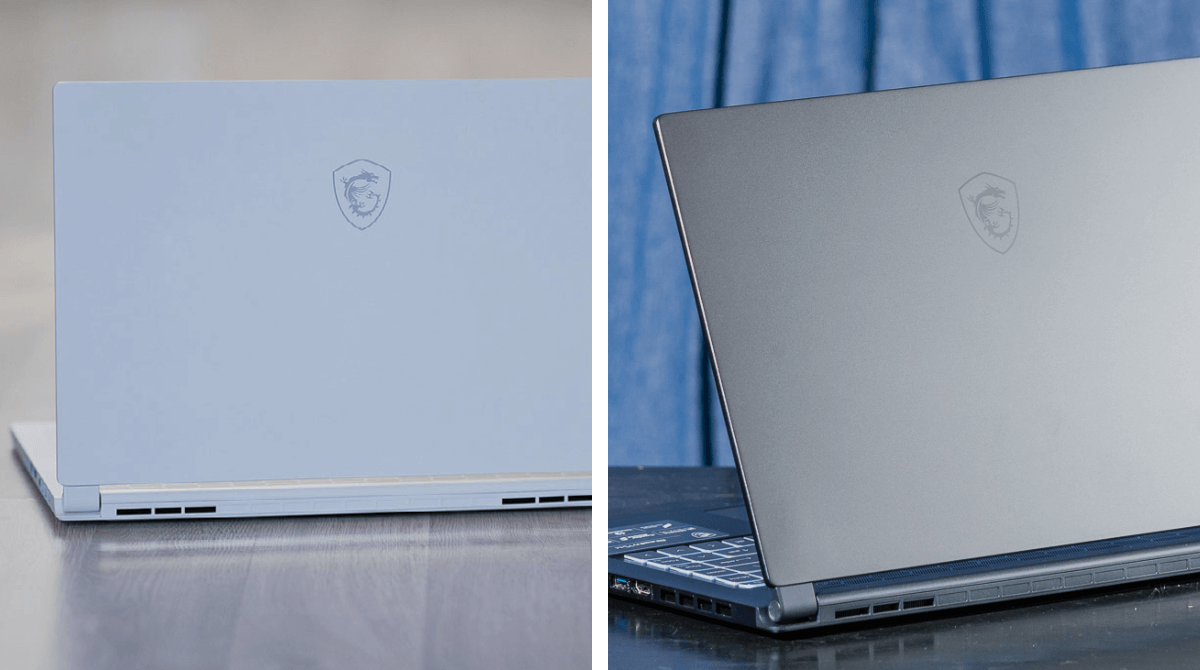 Lightweight, sober look, a GeForce RTX 3060, the MSI Stealth 15M ticks many boxes to appeal to gamers looking for a new laptop. It also embeds an 11th generation Intel Core i7 Tiger Lake processor. The opportunity to see how this Quad-Core CPU behaves against Intel Hexa Core and Ryzen Octo Core processors. 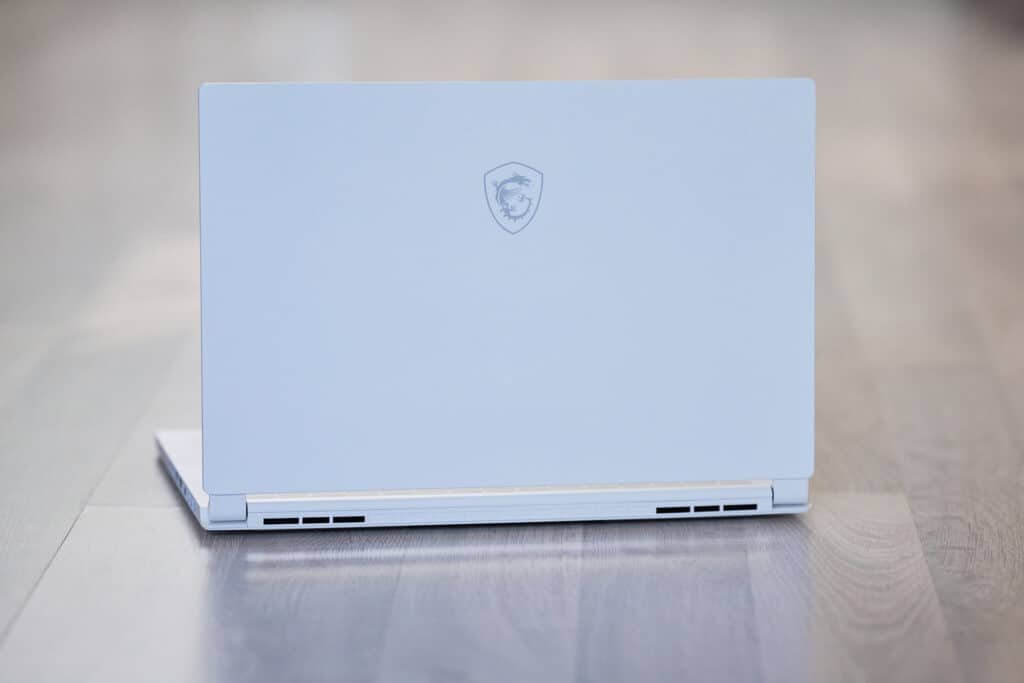 For a gaming laptop, the MSI Stealth 15M sports unusual sobriety. Available in two colors, gray/blue and white, it will appeal to all players looking for discretion to make it a versatile computer capable of integrating into a professional meeting or a classroom without attracting attention. For this purpose, its featherweight of 1.8 Kg constitutes an additional advantage. On the other hand, be aware that its average autonomy of 4h30 will hardly be compatible with nomadic use.

But back to the design of our Stealth 15M. While white (laptop) computers sometimes appear closer to yellow than white, this is not the case here—a good point. Opening the screen reveals an equally sober interior. The ventilation grids present above the keyboard bring a welcome touch to break the monotony of this immaculate design. 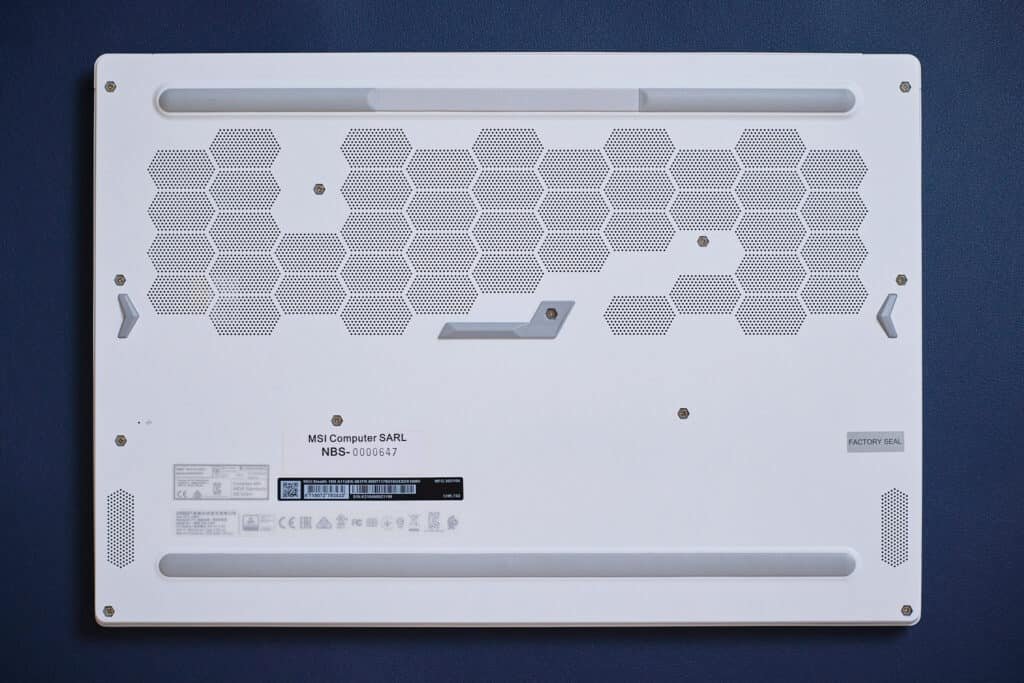 Patterns also present under the underside of the frame. In this regard, access to the components does not pose many difficulties; it suffices to remove the ten or so screws. This allows you to upgrade the SSD or even the RAM if you are ready to return the motherboard to access it. 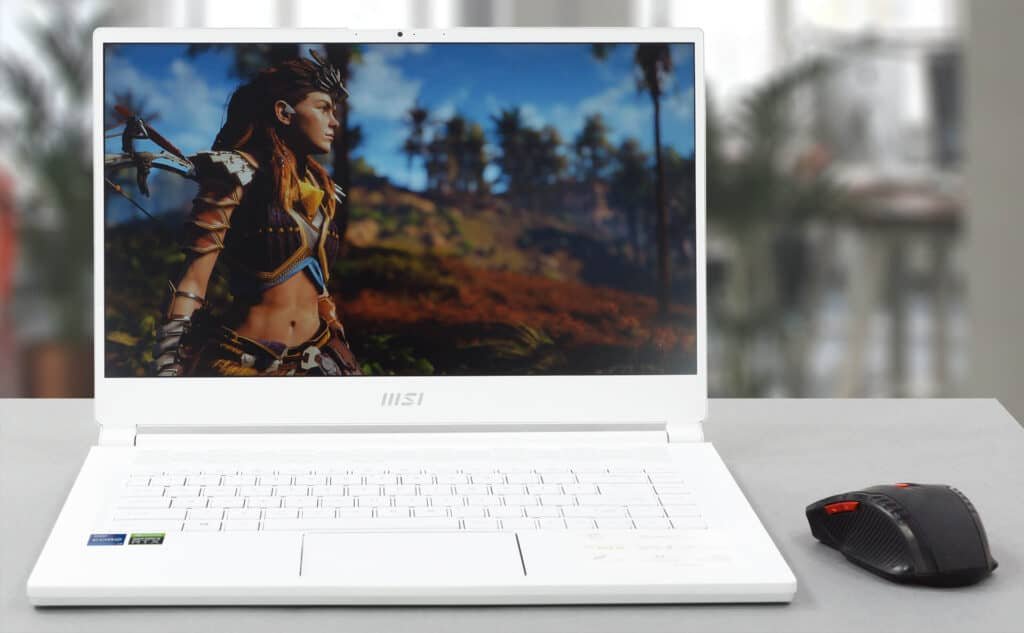 IPS matte panel will suit gamers with its frequency of 144 Hz and its response time of 3 ms, in terms of colorimetry, it is disappointing. The sRGB space is only 58% covered. The native white point is close to 7700K. As for the DeltaE, it stands at 3.8 before characterization but drops back to 1.69 afterward. Maximum brightness is 280 cd / m2 for a contrast ratio of 1107: 1.

Good point, the hinges allow an opening on 180 °. Convenient to position it under an external monitor, for example.

The 720P camera delivers average-quality images and lacks detail. This is, unfortunately, the lot of all laptops still in 2021, despite the current context, which is nevertheless conducive to videoconferencing. 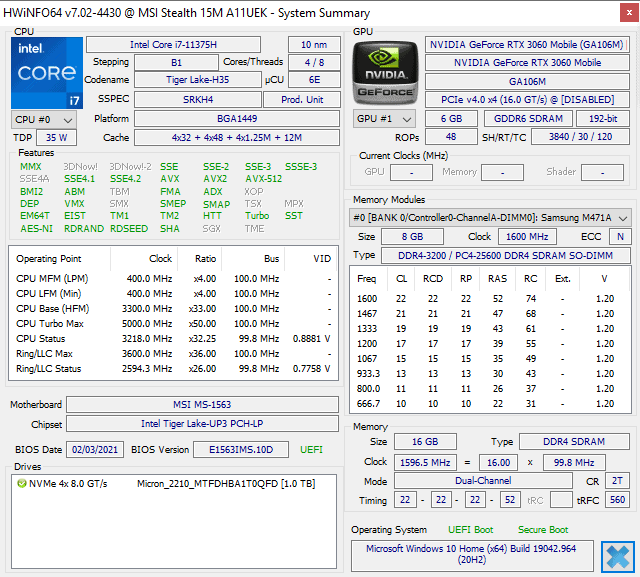 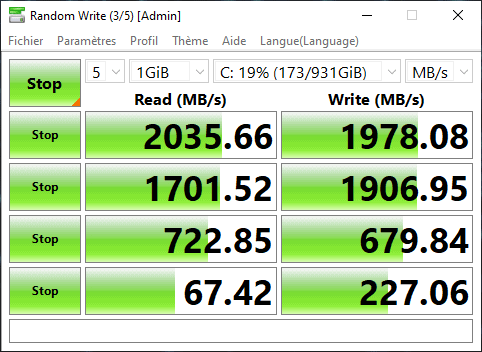 MSI has chosen to equip its Stealth 15M with the Core i7-11375H, one of the latest Intel processors released. This CPU goes a bit against the current trend with its 4 cores (only).

RELATED:  M1 MacBook Air vs M1 MacBook Pro 13: Which Mac Should You Buy 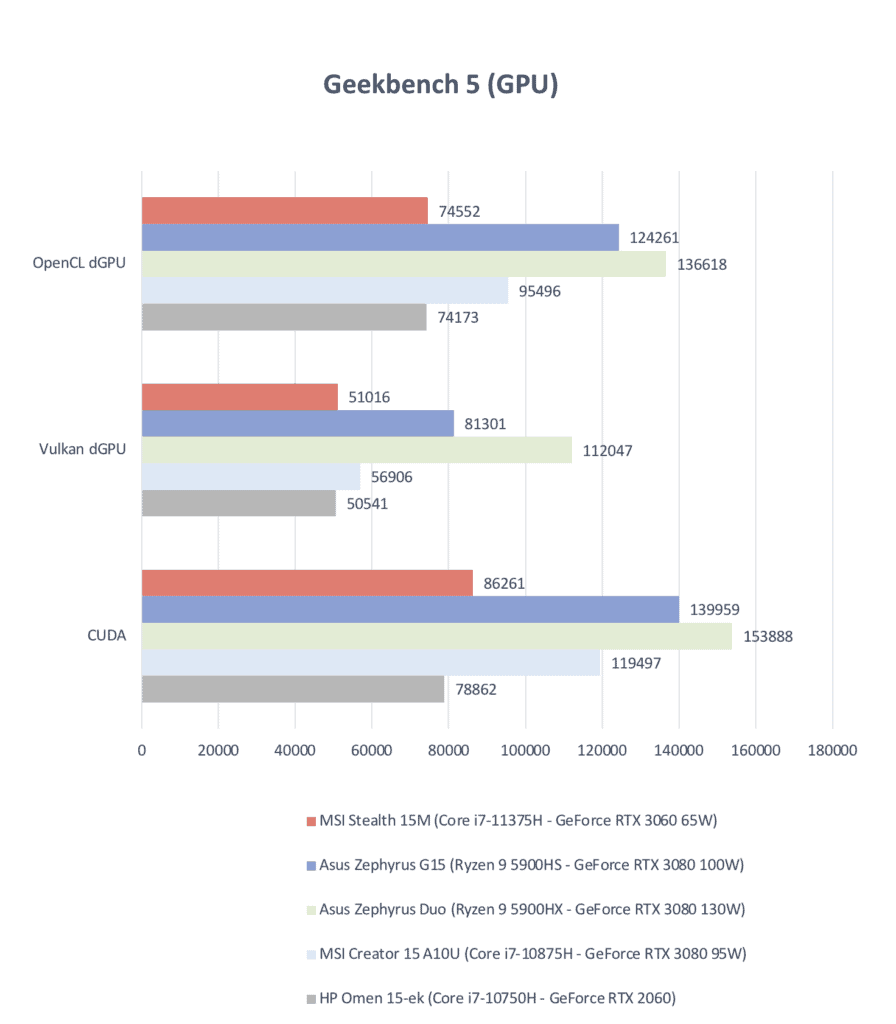 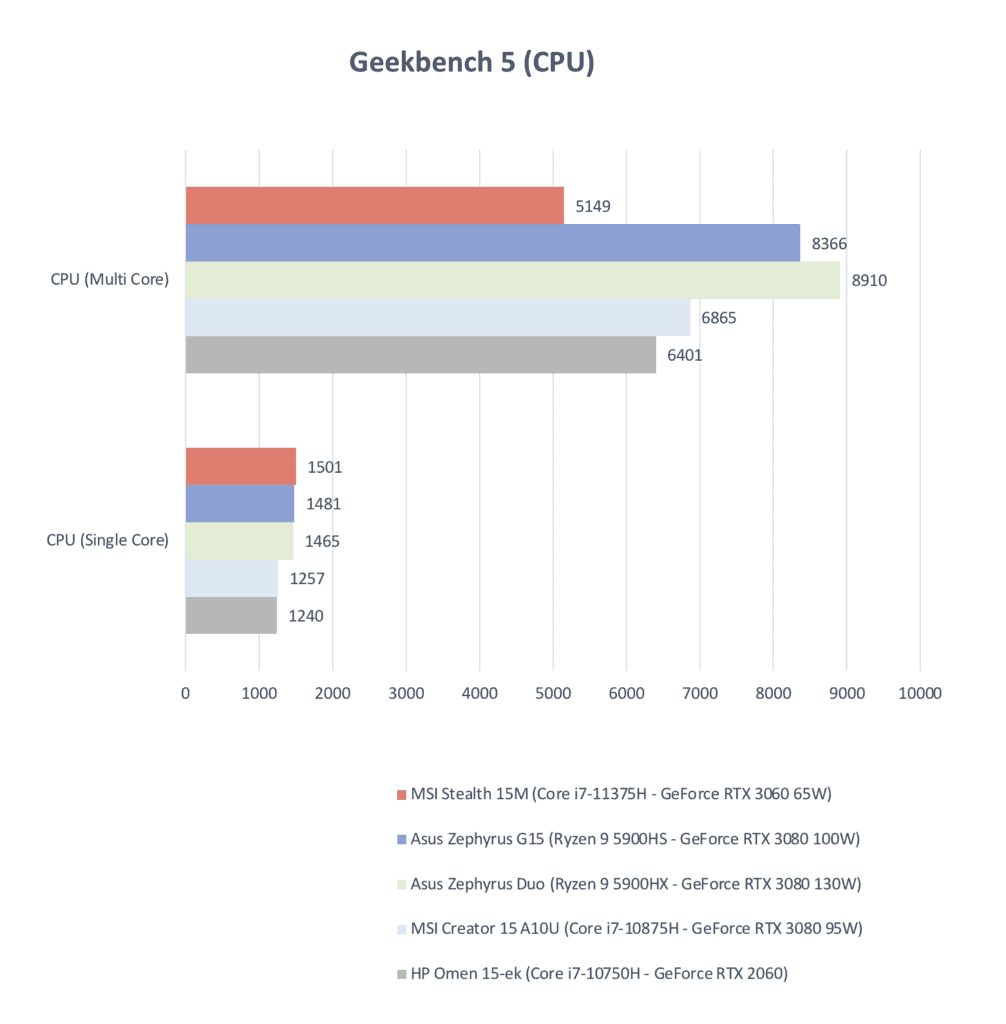 A passage under Geekbench sets the tone. Difficult to compete with the processors usually found on gaming laptops. Whether with the Core i7-10750H (Hexa-Core) and Core i7-10875H (Octo-Core) or the latest Ryzen Octo-Core (5900HS / 5900HX). 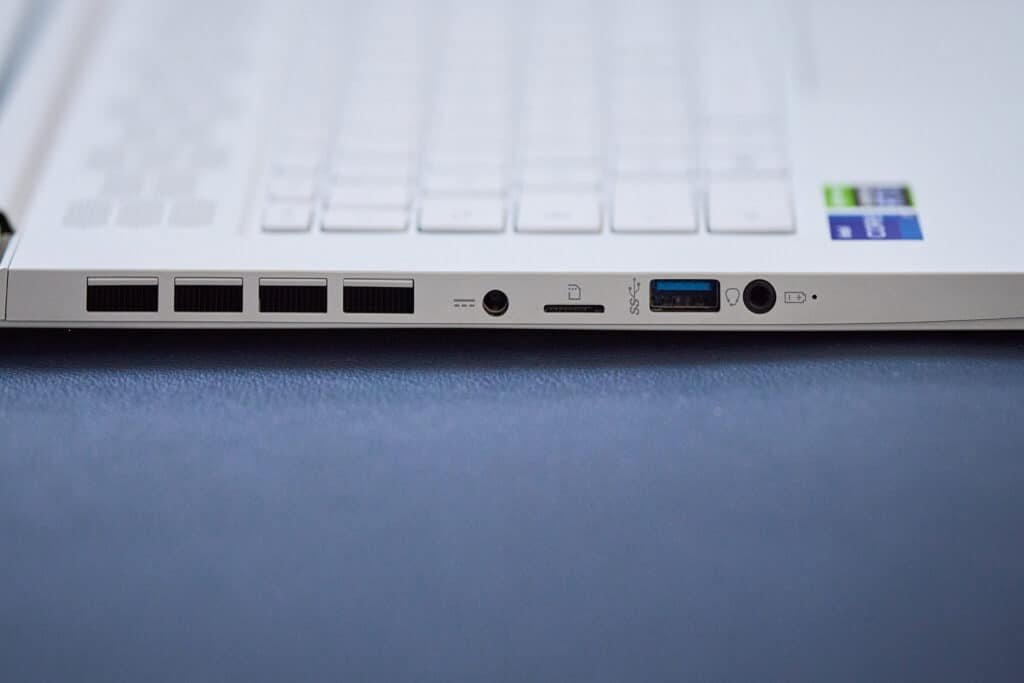 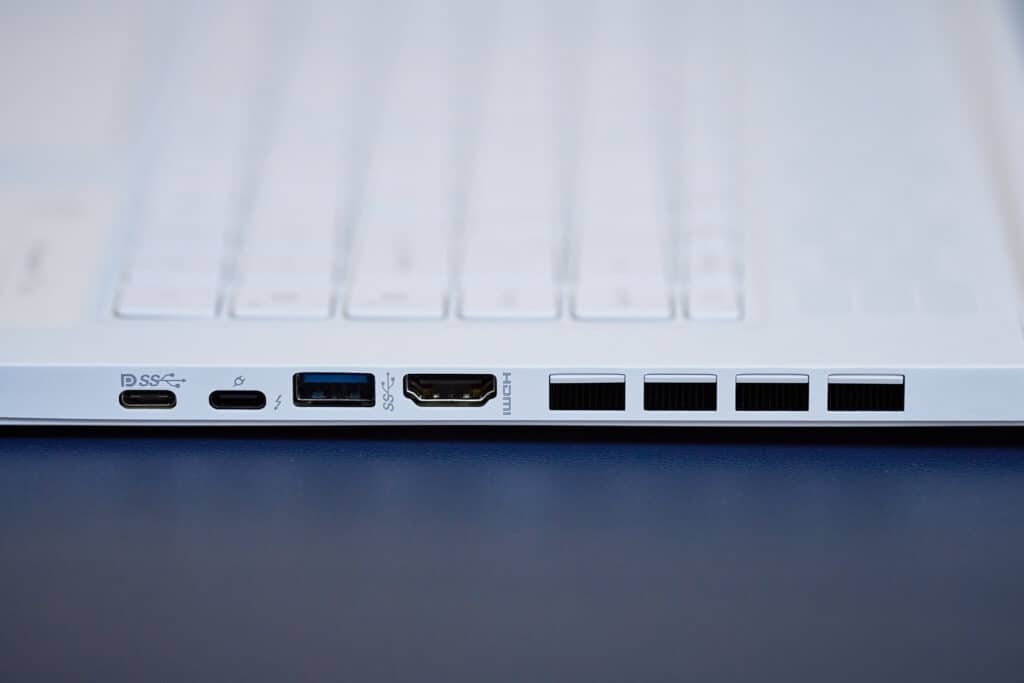 Do not be fooled by the vents resembling USB ports; this Stealth 15M only has two USB-A ports, supported by two USB-C (Power Delivery compatible for charging), including a Thunderbolt 4. There is also an HDMI output, a micro-SD card reader, and a 3.5 mm jack. 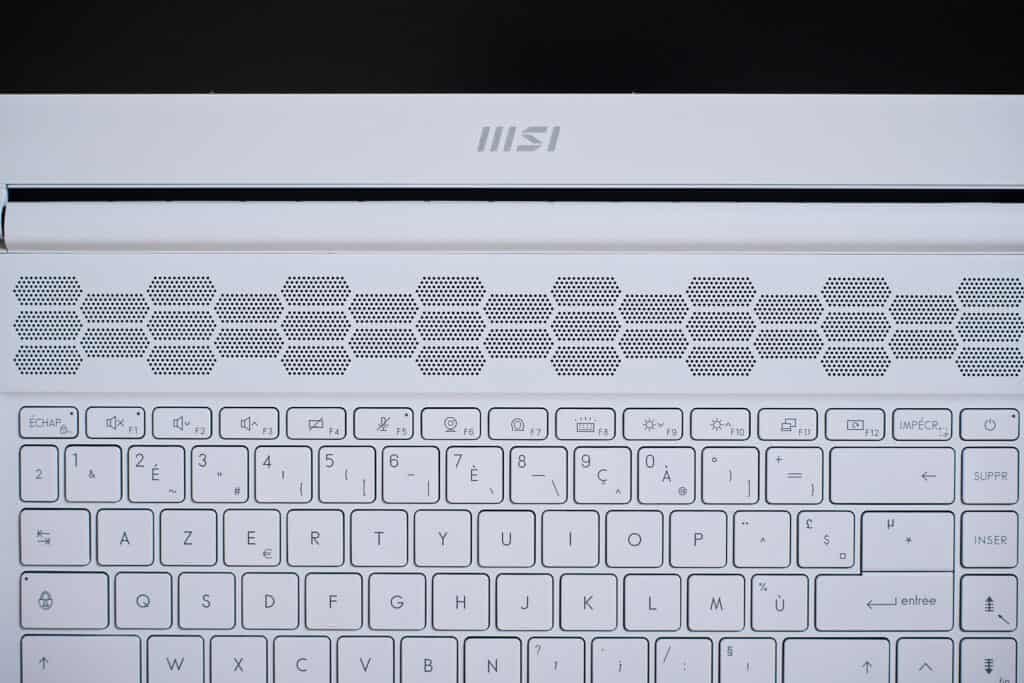 Located under the chassis, at the level of the wrist rest, the two small speakers deliver medium sound. The utility Nahimic manages to save the furniture but a little more. On the other hand, the option to activate surround sound offers a good feeling of spatialization. 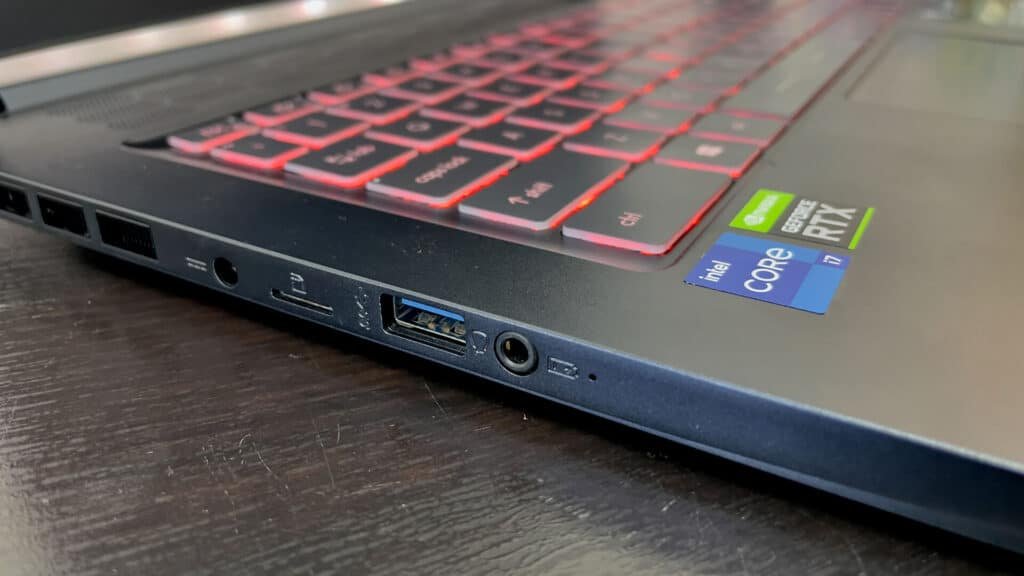 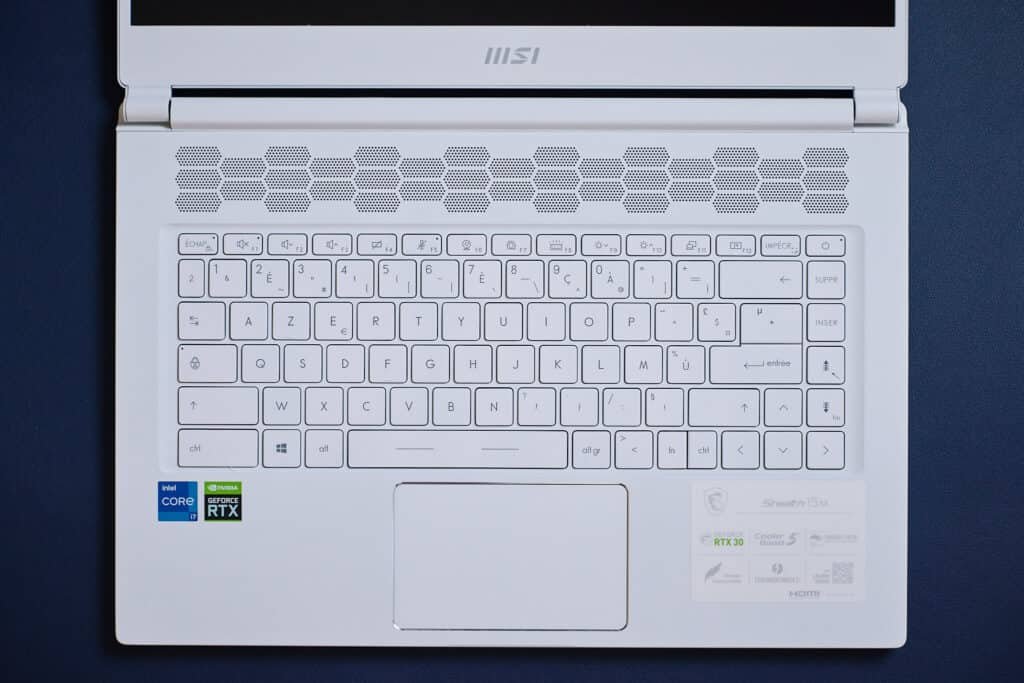 In the absence of a numeric keypad, the keyboard benefits from keys of good size (16.6×16.6 mm) but at the expense of the spacing (2.8 mm). The stroke is short (1.25 mm) for a gaming laptop—the requirements of such a thin frame. However, the strike remains soft and, above all, very discreet. However, the keyboard layout is more confusing with a row of keys to the right of the Enter key, which causes a lot of unintentional presses during the first hours of use.

The keyboard benefits from RGB backlighting but in a single zone. Some effects are offered via the Dragon Center utility. The touchpad does not call for any particular criticism except, in a pinch, its narrow dimensions (105×65 mm).

With its compact size and lightweight, the Stealth 15M seems ready for a nomadic life. But that was without counting on a modest 55 Wh battery with an average battery life that barely exceeds 4h30 in web browsing with the brightness set at 140 cd / m2. Note that the Dragon Center utility offers an option (well hidden) to limit the battery charge and thus preserve its life during sedentary use on the mains.

The Stealth 15M is aimed at gamers looking for a portable gaming PC with the dimensions and weight contained to carry it around without too much difficulty. On this point, with 1.8 kg on the scale, the mission is fulfilled. Too bad the battery does not follow (4h30). Fortunately, it is possible to recharge it in USB-C, and therefore to slip a small 65W charger as a backup at the bottom of the bag.

For the rest, this MSI ultrabook gamer can count on its sober look capable of blending into any environment as long as we are satisfied with white color (for example) as a backlight for its keyboard. RGB.

The Quad-Core processor is not the fastest on the market, but it is a concession to try to contain temperatures and noise even if, on these points, we can not say that the Stealth 15M is doing it with honors. It is the same for the screen, penalized by a brightness but especially a disappointing colorimetry.

As for the prices, they may seem high at first glance, but in reality, for a gaming laptop weighing less than 2 kg, the Stealth 15M are among the most “affordable.