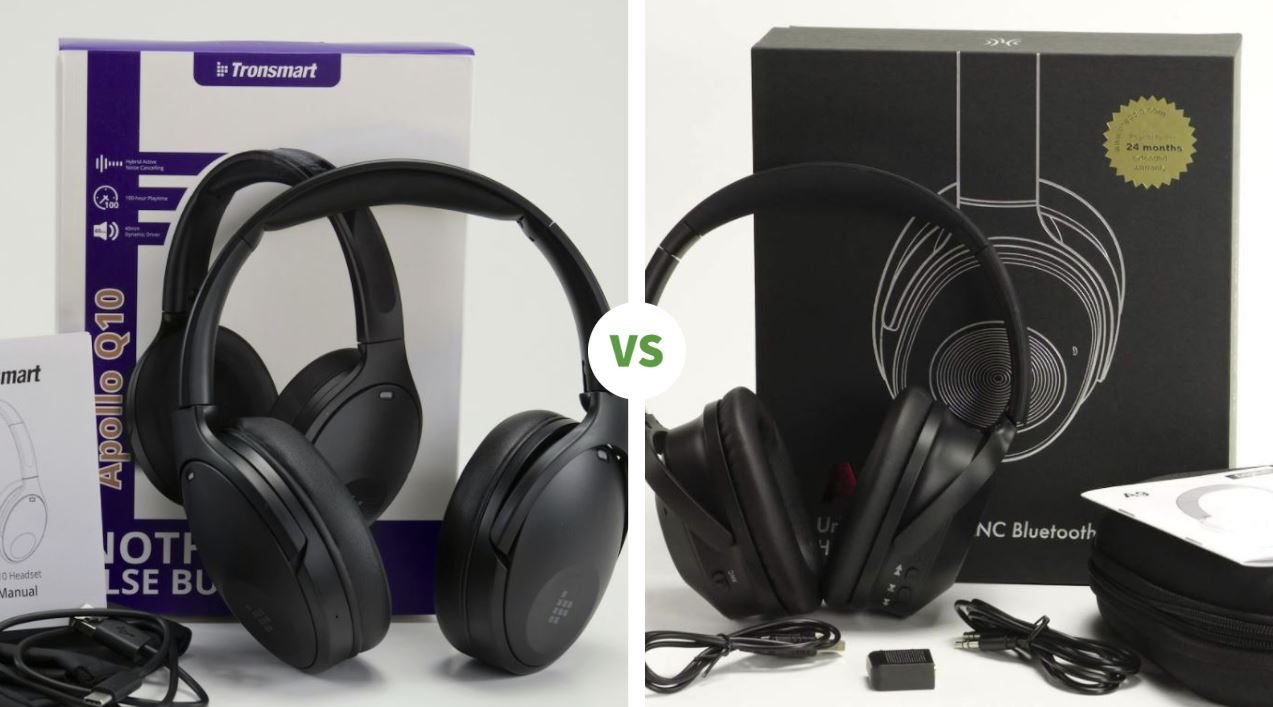 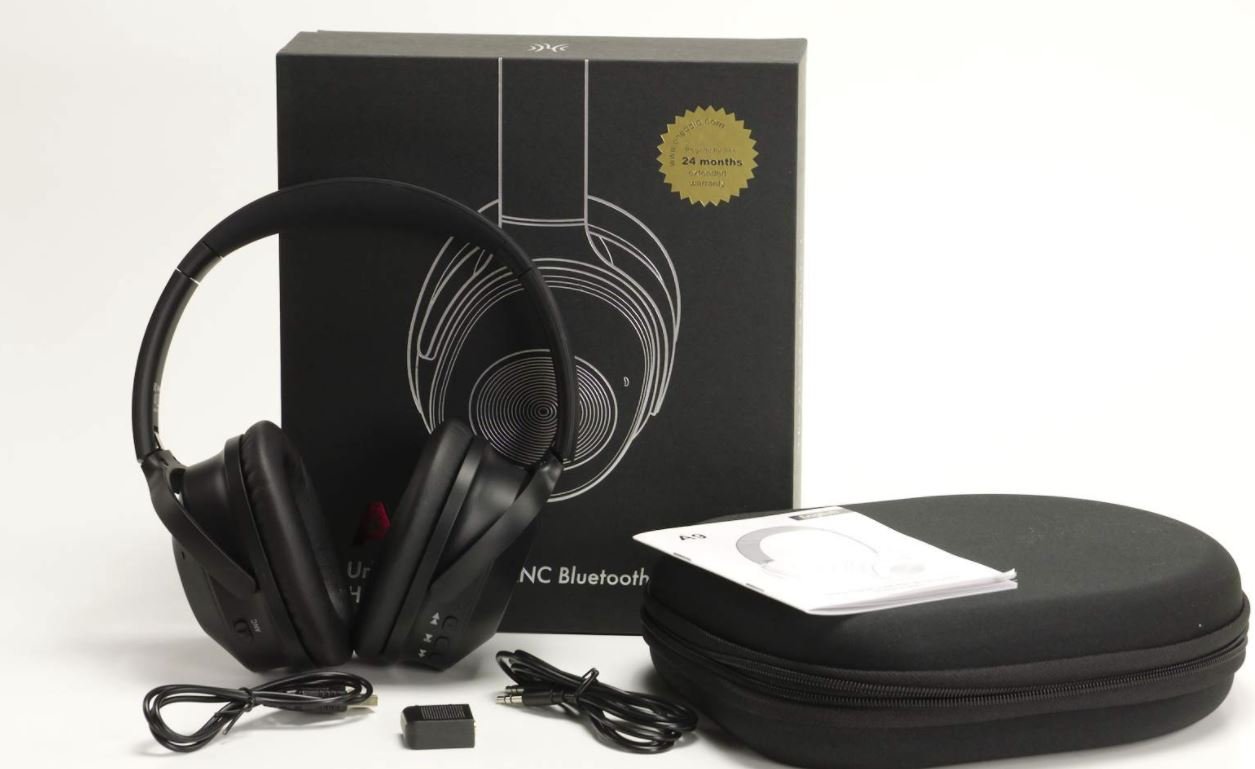 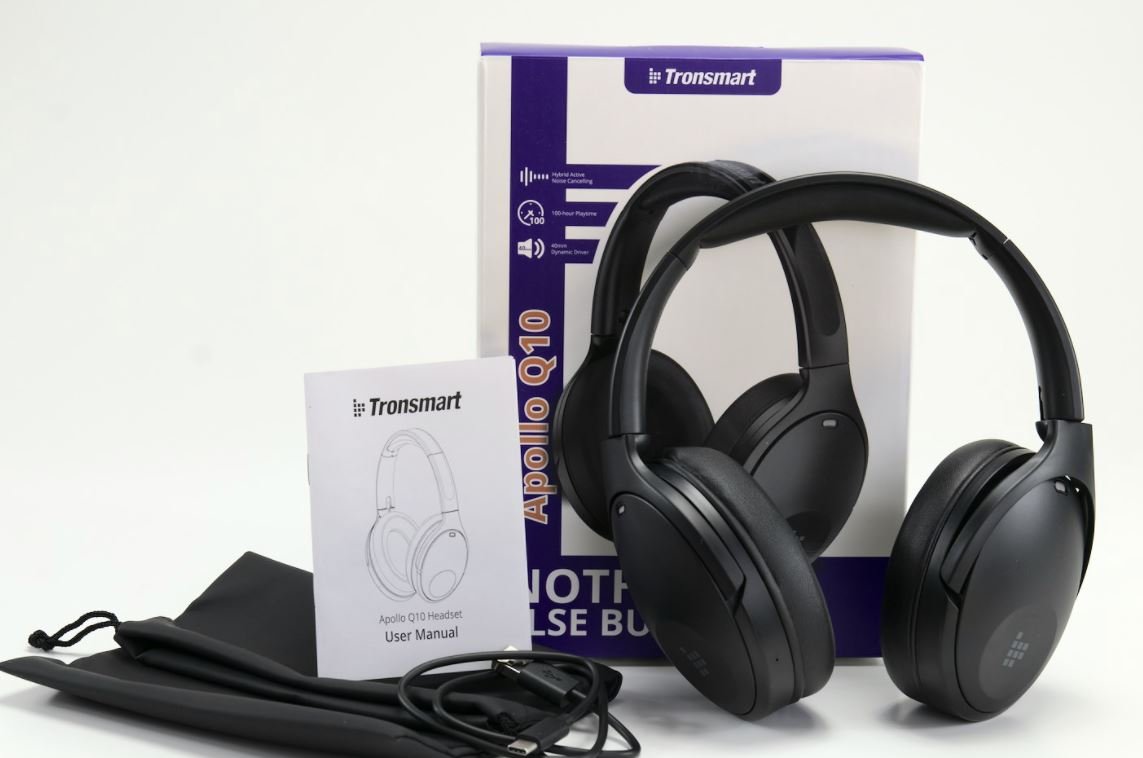 OneOdio A9- The A9 sits very gently and does not press at all. It is a closed construction of the auricles, but that is usually the case with ANC. The inner surface of the ear cups is 6 cm high and 3.5 cm wide. The cushions are 1.5 cm thick, covered with synthetic leather, and very comfortable. So I’m excited about wearing comfort at a price.

The headphones weigh about 260 grams and are therefore not ultra-light and not heavy. The earpads are attached to flexible joints that adapt to the shape of the head both horizontally and vertically. Optimal for comfort. The auricles can also be turned 90 ° backwards. But we can also turn it forward by about 30 °. The headband is also height-adjustable in seven steps, and the steps are shown as numbers on the reinforced metal handle.

The head pad is soft and covered with a kind of soft rubber. This is sweat and water repellent and easy to clean. We can also fold the headphones up and reinforce the joints with metal. This means that there is plastic inside, which is then encased in metal. The folding mechanism runs over the metal. The joints look solid.

Most of the elements of the headphones are made of matte plastic and look very well made for this price. The design appeals to me personally, simple, clean and classy.

A hard-shell transport box is also included for transport—practical accessories. Since the headphones can also be folded, you can get a miniature version if necessary. A suitable adapter for the airplane is also included. 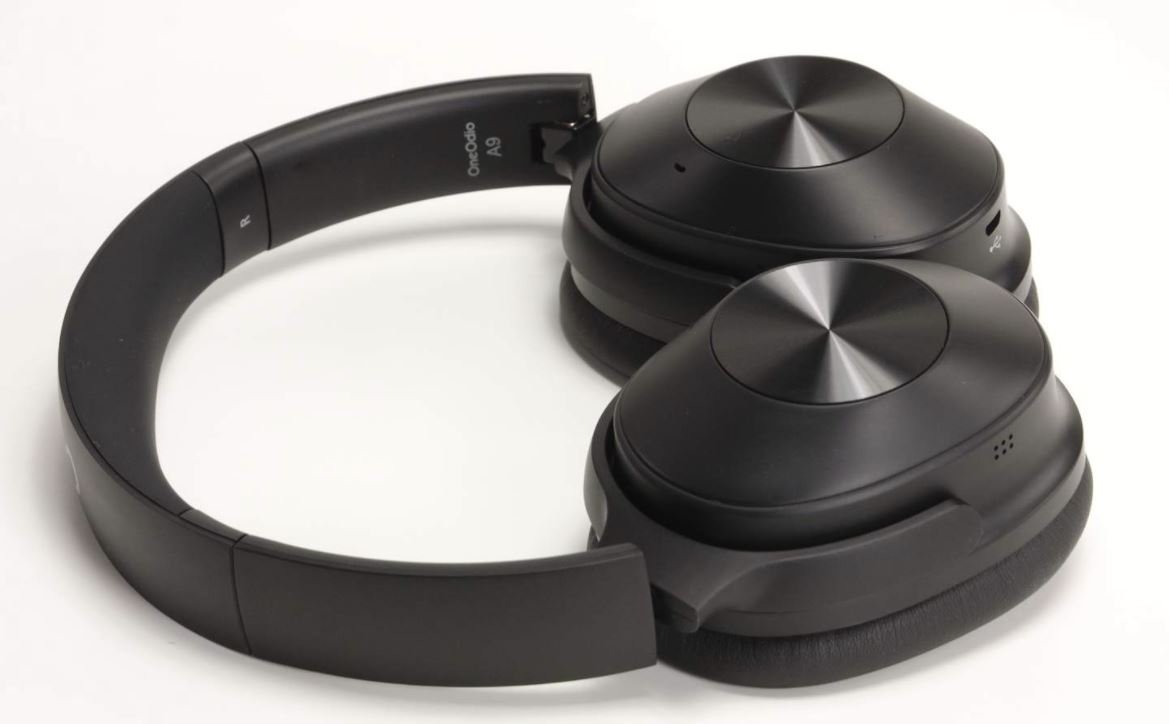 Tronsmart Apollo Q10- The headphones seem chic and simple to me at first. Mainly plastic is used here. The headband is probably also reinforced with metal, but I can’t tell from the look. The height adjustment engages cleanly and precisely, and there are 9 levels. For me, level 1 is enough.

The seat is tight but not too tight. Exactly suitable for me, as I prefer a somewhat tighter fit. Exercise or light jogging would therefore be possible.

It is possible to turn the ear cups backwards by 180 °. It can also be folded up at the joints. These joints consist of a type of ball joint. However, the main guide is made of plastic, and we should therefore be more careful with it, I would say.

The outside of the headband bears the Tronsmart logo and has a piano lacquer look. In addition, the head cushion is softly padded on the inside, and the cushion is covered with synthetic leather.

Let’s get to the ear pads. These are nice and soft and covered with synthetic leather. The inner surface of the mussels is 6 cm high and 4 cm wide in the middle. This means that slightly larger ears should also fit here. The mussels also adapt vertically and horizontally to the shape of the head. Optimal for comfort.

The weight is around 232 grams, and so the headphones are not extremely light but also not heavy. 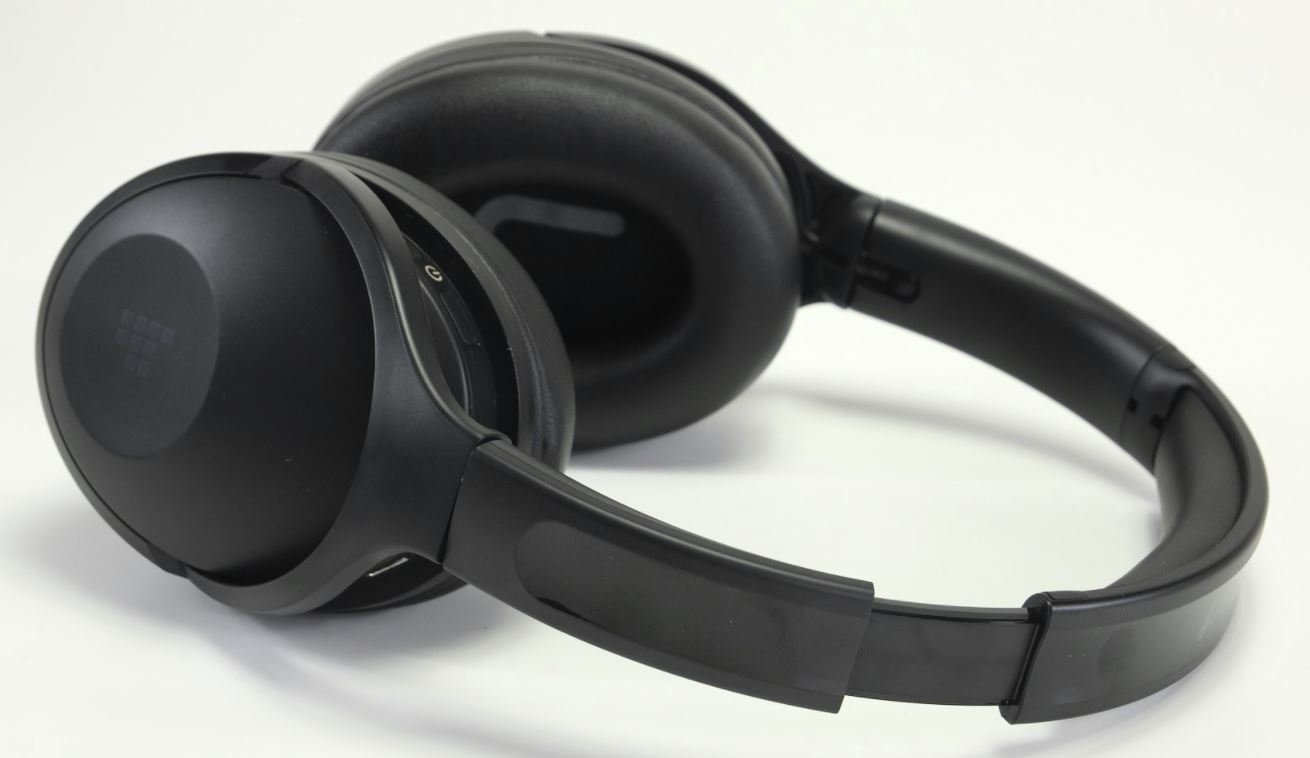 The ANC generates a shallow background noise level, as is almost always the case. In addition, the ANC changes the sound! With ANC, the highs are more transparent or somewhat dominant; without ANC, they are weaker. The sound is better without ANC because the highs with ANC are too dominant for me. However, we can quickly compensate for this with an equalizer if necessary. This is a matter of skill, and that it is also heavily dependent on the type of music. In addition, it also depends on your hearing and how well you can hear higher frequency ranges.

With the A9, I feel pressure on my ears, which is caused by the counter signal from the ANC. Some users have also reported this with the QC 25. The feeling is difficult to describe, but maybe one or the other knows what I’m talking about. In conclusion, I have to say that the A9 surprised me significantly in terms of ANC performance. The Bose QC 25 / QC 35 is better, no question about it, but the A9 comes close. The OneOdio A9 feels like the best ANC I’ve seen in this price range so far.

The headphones have a built-in microphone, the sound of which I find pretty good, but listen for yourself because there is a test recording in the video above, see timestamp.

Tronsmart Apollo Q10 – There is no background noise at first. It is also very suitable for audiobooks.

There are four equalizer modes via the app, which I present to you in the video.

I also had the ANC on during this hearing test. I also have the feeling that the bass is a bit stronger with ANC.

Everything looks brighter. Voices are still clearly there. It feels like there is a maximum of 20-30% here. Incidentally, all ANC headphones generally perform worst at this noise.

Again, this is an entry-level ANC, and the headphones only cost around $ 60. On the other hand, the ANC is a nice bonus that mainly reduces lows.

The OneOdio A9 has 3 media buttons on the right auricle at the back. The key at the top has a plus symbol and two up arrows next to it. This button can be used to increase the volume. On the other hand, a song is skipped forward if we press and hold it for about 2 seconds. The same applies to the key at the bottom, only that we increase the volume here or jump back one piece. The button in the middle is the multifunction button. If we press this when music is playing, it is paused or continued. Long press switches the headphones on or off.

There is a slide switch on the rear left auricle for the ANC itself. If we flip the switch, an LED on the switch lights up green. The LED above the media buttons also flashes blue every 5 seconds when the headphones are active.

We can also use the media buttons to control phone calls. 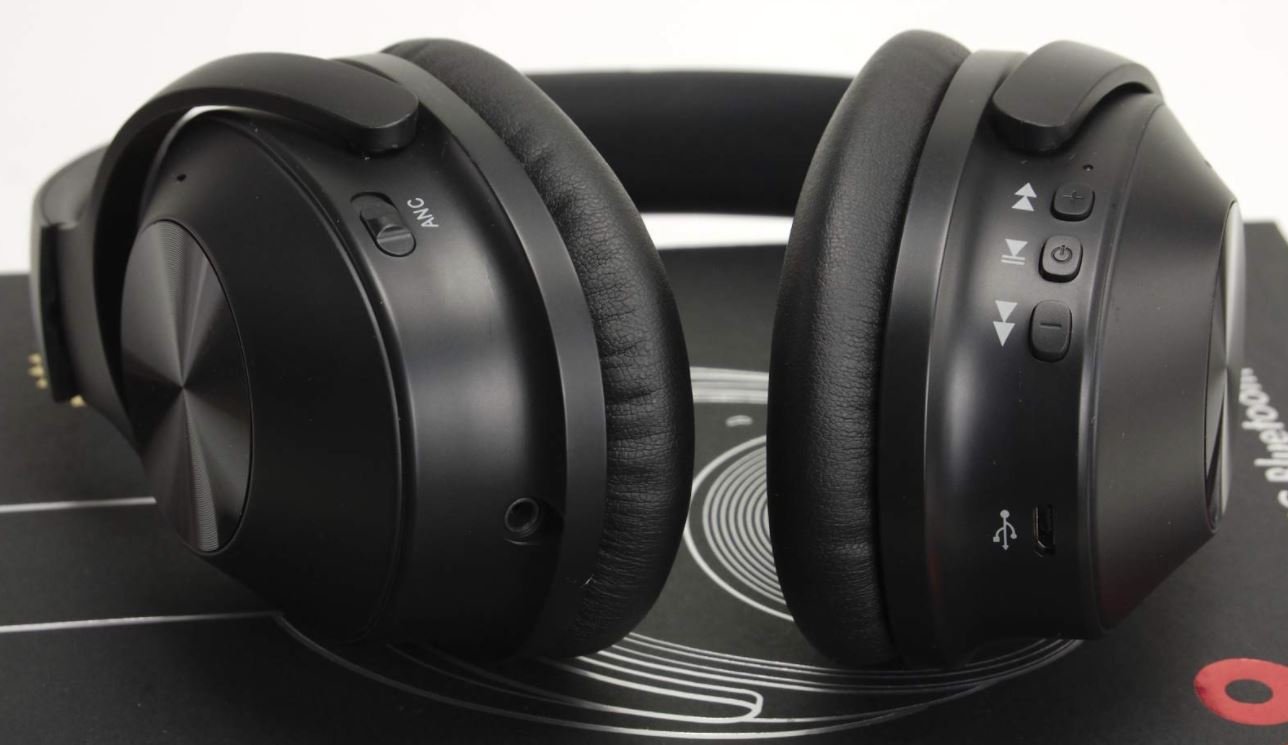 Tronsmart Apollo Q10 – The headphones have a slightly hidden power button because the joint has to be tilted slightly to reach it. There is also a button labelled MFB. If we press this, the mobile phone’s voice assistant is started.

However, the main control/media control occurs via the touch surface on the outside right.

If we tap and hold the touch surface for 3 seconds, it changes the mode. There are 3 modes in total. 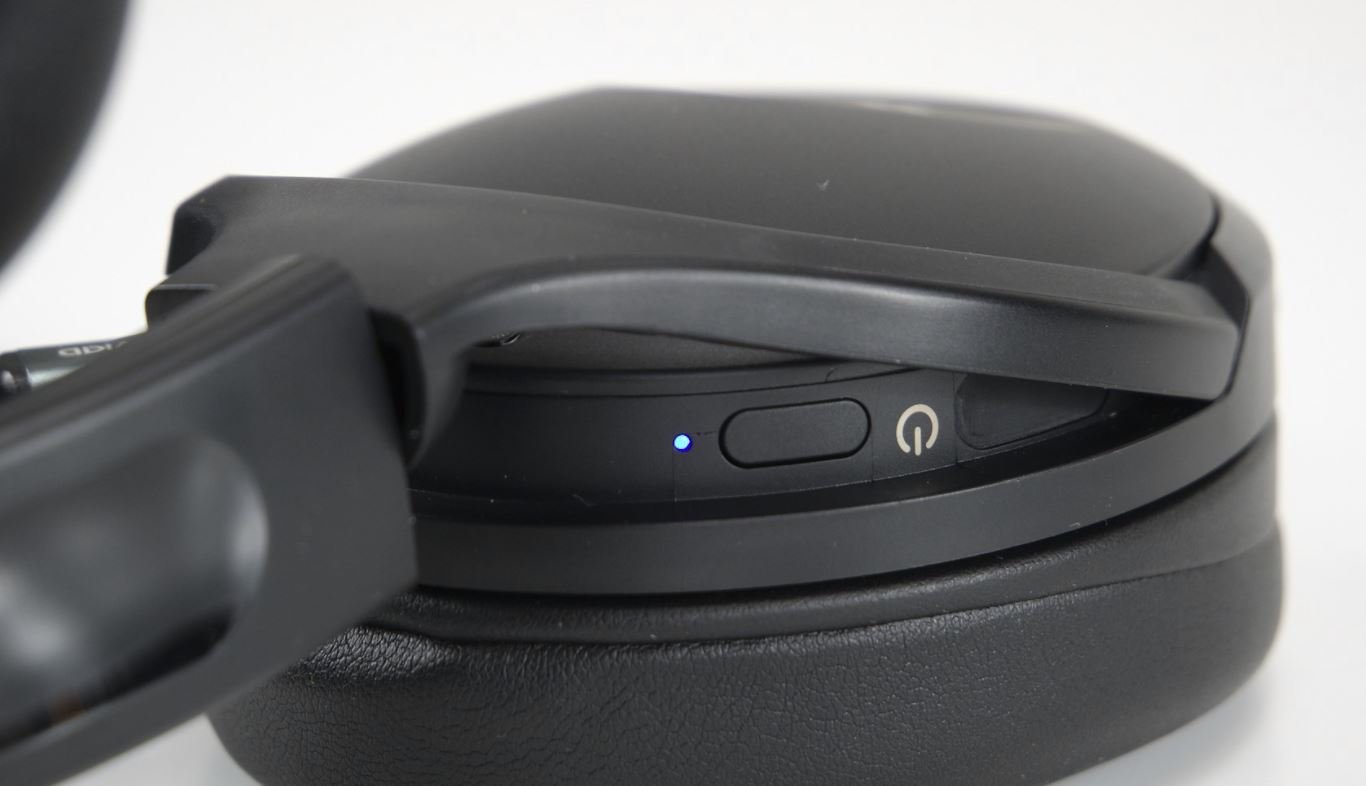 To activate the pairing, press and hold the power button until the LED starts to flash alternately red and blue. Then we select the A9 in the Bluetooth settings.

The Tronsmart Apollo Q10 is charged with a USB-C cable, and the LED on the headphones lights up red during the charging process and turns blue when the integrated 1200 mAh battery is fully charged. The maximum charging time feels like 3-4 hours. The battery is comparatively large, with 1200 mAh. A Jabra Elite 85H or a Bose Quiet Comfort 35 II, for example, has a 500 mAh battery installed. But there is also a quick charge function, and a 10-minute charge will charge the battery for up to 3 hours.

It is stated that the headphones can play for a maximum of 100 hours at 50% volume. With an audiobook, that may well be the case without the ANC. With ANC, that will probably run more towards 50-70 hours. That’s still more than enough.

When switching on, switching off and connecting, audio cues are heard, sometimes with a male voice; otherwise, it is more of a female voice. When we switch on the headphones for the first time, the LED flashes alternately red and blue, which shows us that the pairing mode is active. To activate the coupling mode manually, press the power button when switched off and hold it until the LED flashes red and blue alternately.

The OneOdio A9 is an ANC Bluetooth headset in the price range of up to 80 USD. With the OneOdio A9, I have to say that it is the model that I have liked best so far. In particular, the ANC surprised me significantly because in the price range up to 80 $, it is the best ANC I have seen so far. Very close to the QC 25 or 35. I find the wearing comfort very good, and the sound is also suitable for this price range. Quality, comfort and design also convinced me.

The Apollo Q10 cost around 60 € and delivers a good sound for the price. We can also adjust the sound via the app, and if you don’t like the equalizer modes there, you can always use the equalizer of the music app.

There is rarely an app for 60 $ headphones. Mostly there are apps only for the more expensive models from 100 $ upwards. The design is chic and simple. The only thing I wouldn’t say I liked that much is the plastic folding joints, where I couldn’t see any visible metal reinforcement. But does not mean that one is not possibly cast into the plastic. The wearing comfort is also good; the ear cups are large, the pads are soft, height-adjustable, and the ear cups adjust vertically and horizontally. 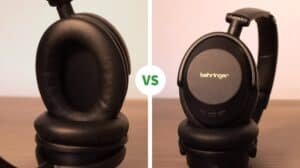 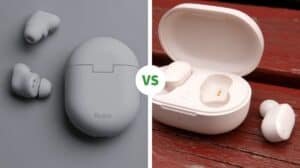 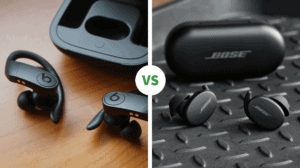 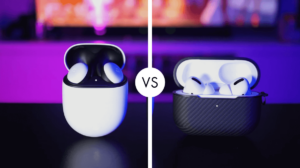 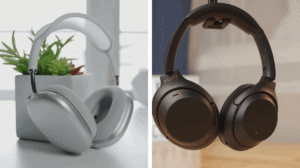