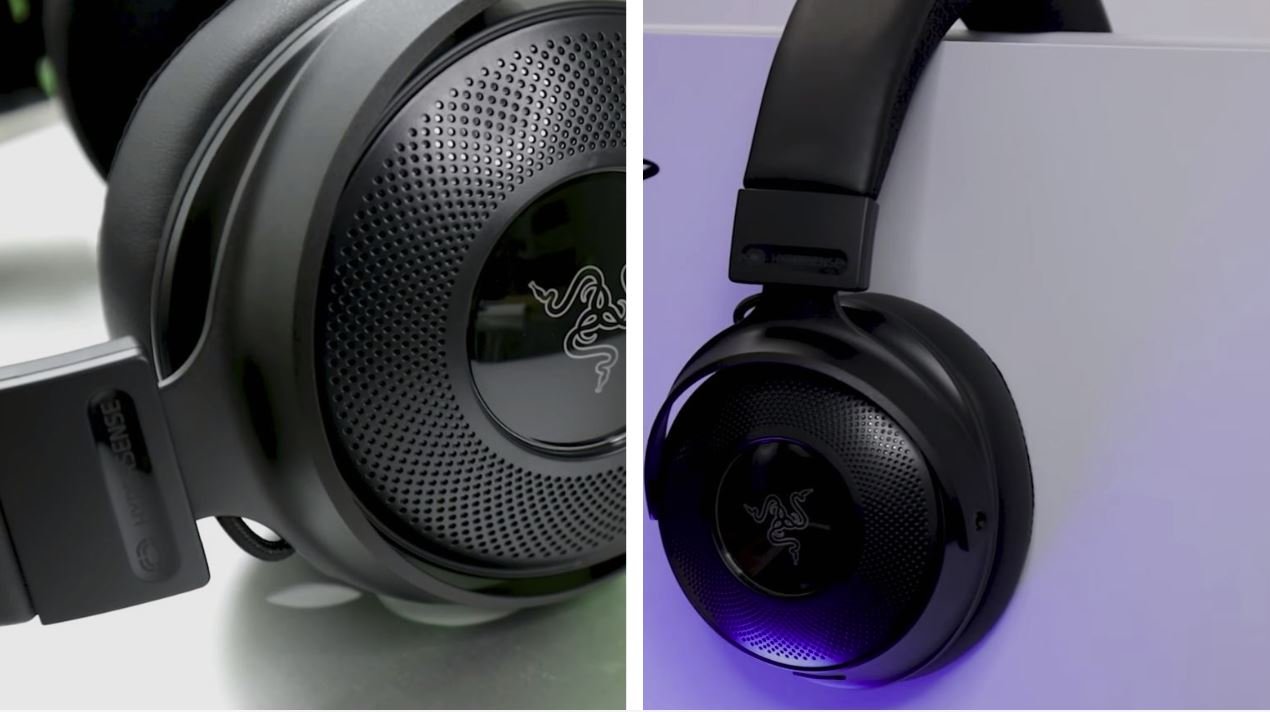 To stand out in the gaming headset market, you need to create something progressive. And Razer is well aware of this. Therefore, we are regularly surprised by the interesting features offered by the specialists of this company. 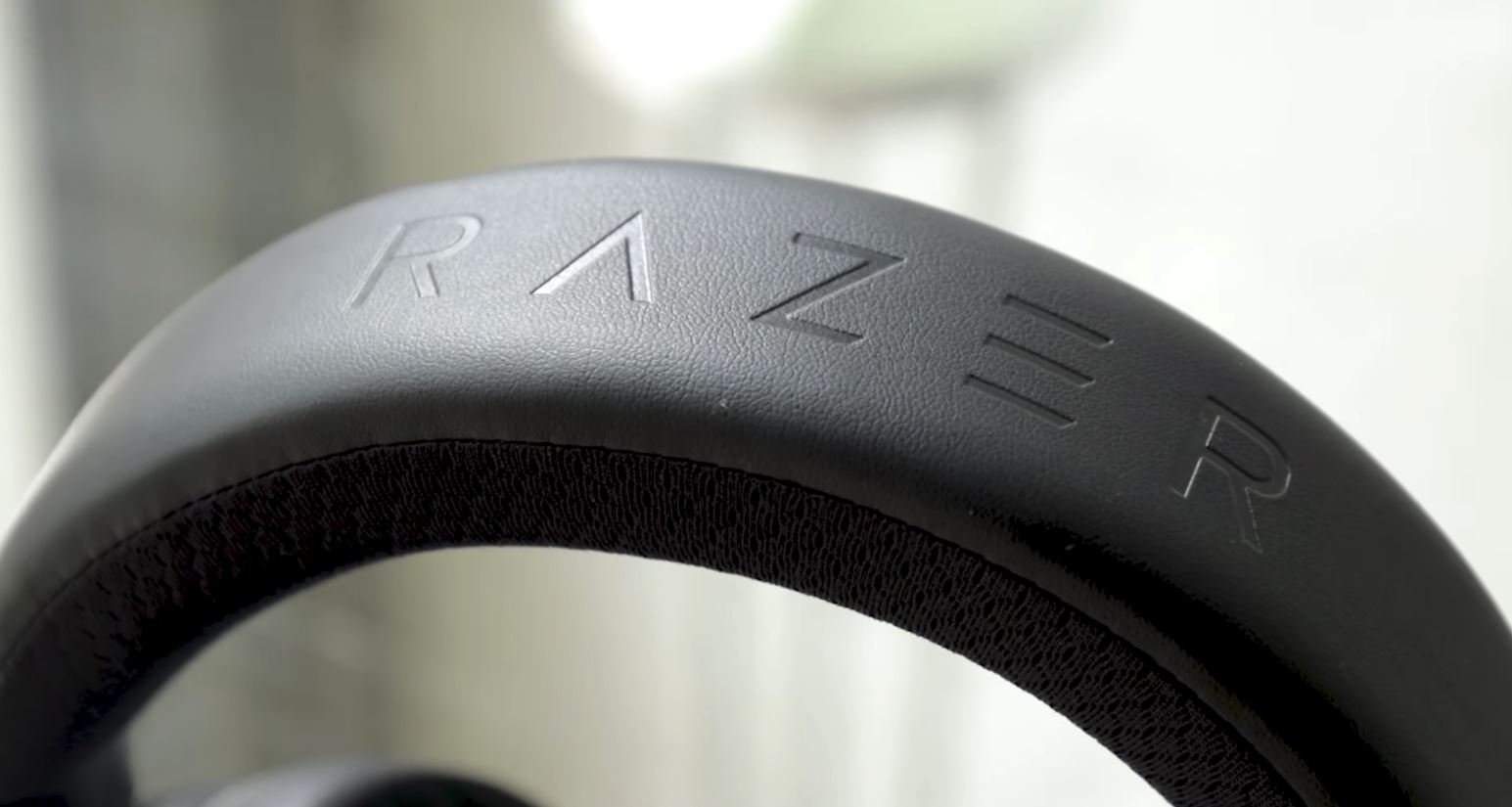 Now it’s time to turn to the Kraken V3 series of headsets, namely the HyperSense model, which has vibration motors in addition to conventional speakers. The Razer Kraken V3 HyperSense headset, which sounds and acts on the head with the help of intelligent tactile technology. 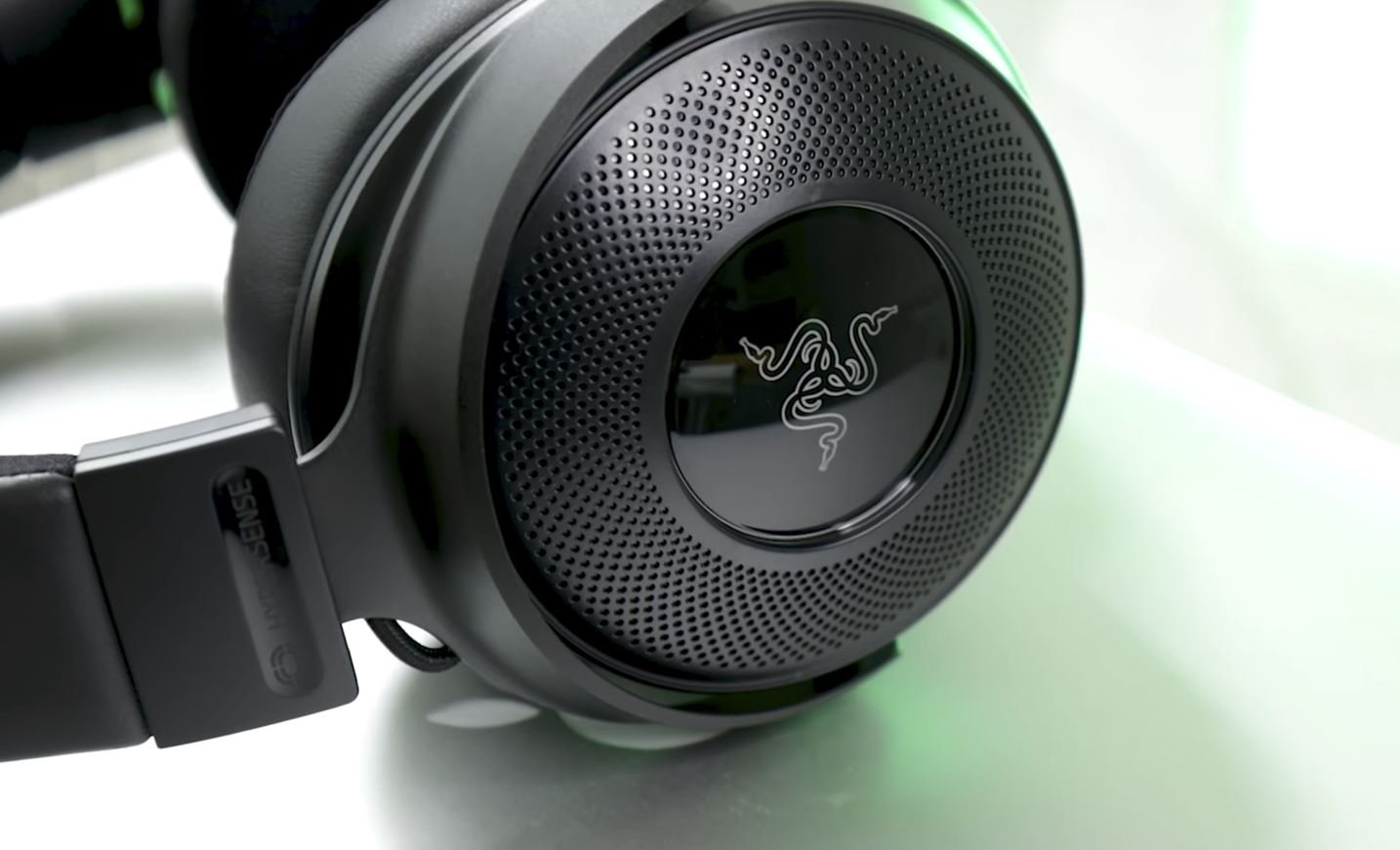 The headset is almost entirely made in matte black with a glossy scar in the center of the cups. There is also a backlight that resembles a high-profile car wheel. The rest of the geometry is simple, and from the styling and the illumination of the Razer logo, there is only a perforated frame. 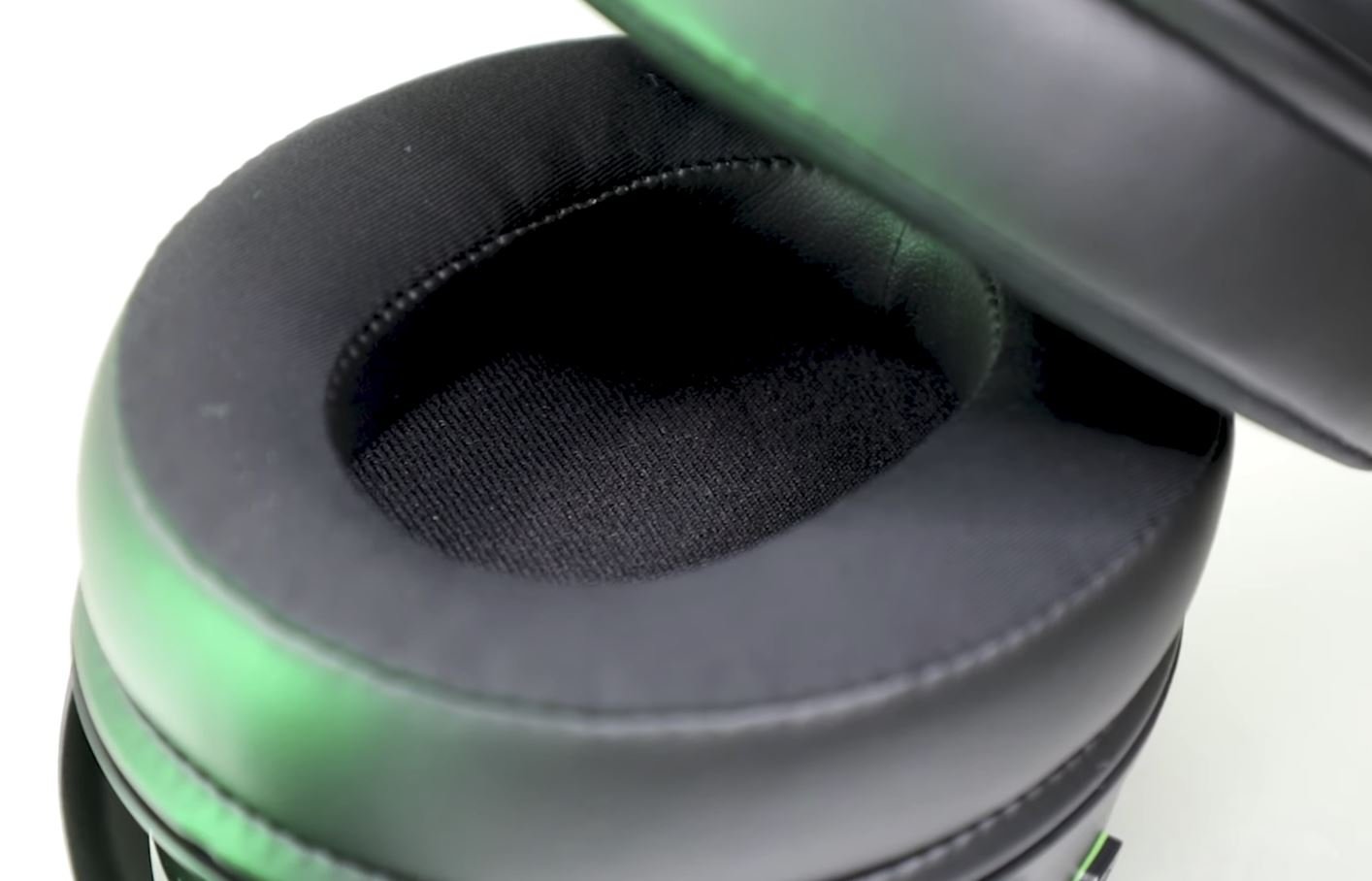 Kraken V3 HyperSense has a relatively small weight – 335 grams. The metal here is used only in the base of the headband and the Y-shaped attachment of the cups. “Pillow” at the headband is present. It’s crafted from fine leather and filled with soft memory foam. The same applies to ear pads, which are made of leather. Which does not have a very good effect on the ears’ ventilation compared to the fabric, but it gives better sound insulation (at least in theory). 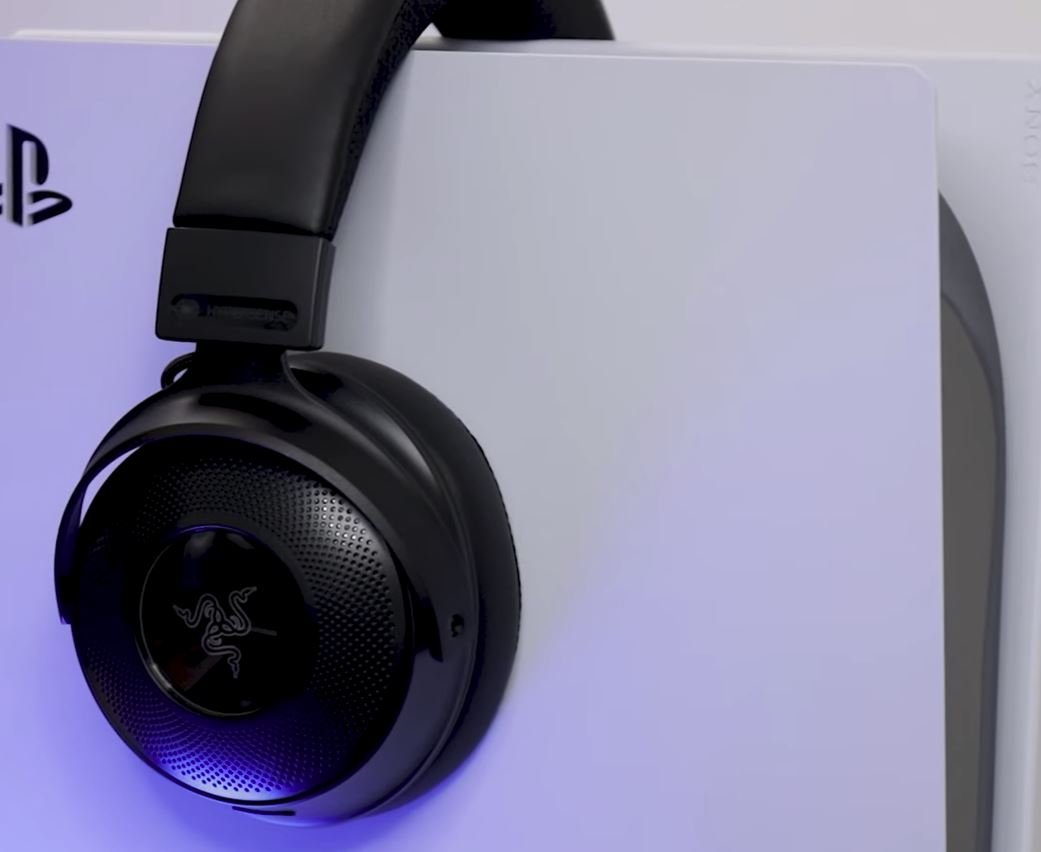 The plastic case is adjacent to soft ear cushions and a headband cushion. The earpads are covered in signature Leatherette faux leather and have memory foam inside. The cushion also feels filled with foam, but it has a fabric coating.

Of course, there is a backlight – it traditionally illuminates the Razer logo located on the outside of the cups. The backlight is minimalist but highly visible and stylish.

Unfortunately, the headphones do not have a folding mechanism, and a case included. And, unlike the Blackshark V2 Pro, as we are talking about a wired headset designed for use at home or in the office. Although, of course, a small fabric case in case of carrying would not hurt. In addition, we note a massive cable, which has an impressive length of two meters.

The wire comes out of the left cup; it is two meters long and has a fabric braid and protection against kinks – there are no questions to it, except for its presence. When used in wireless headsets, the wire causes physical and mental discomfort. But this is a very subjective point – the Kraken V3 HyperSense wire itself is very good. 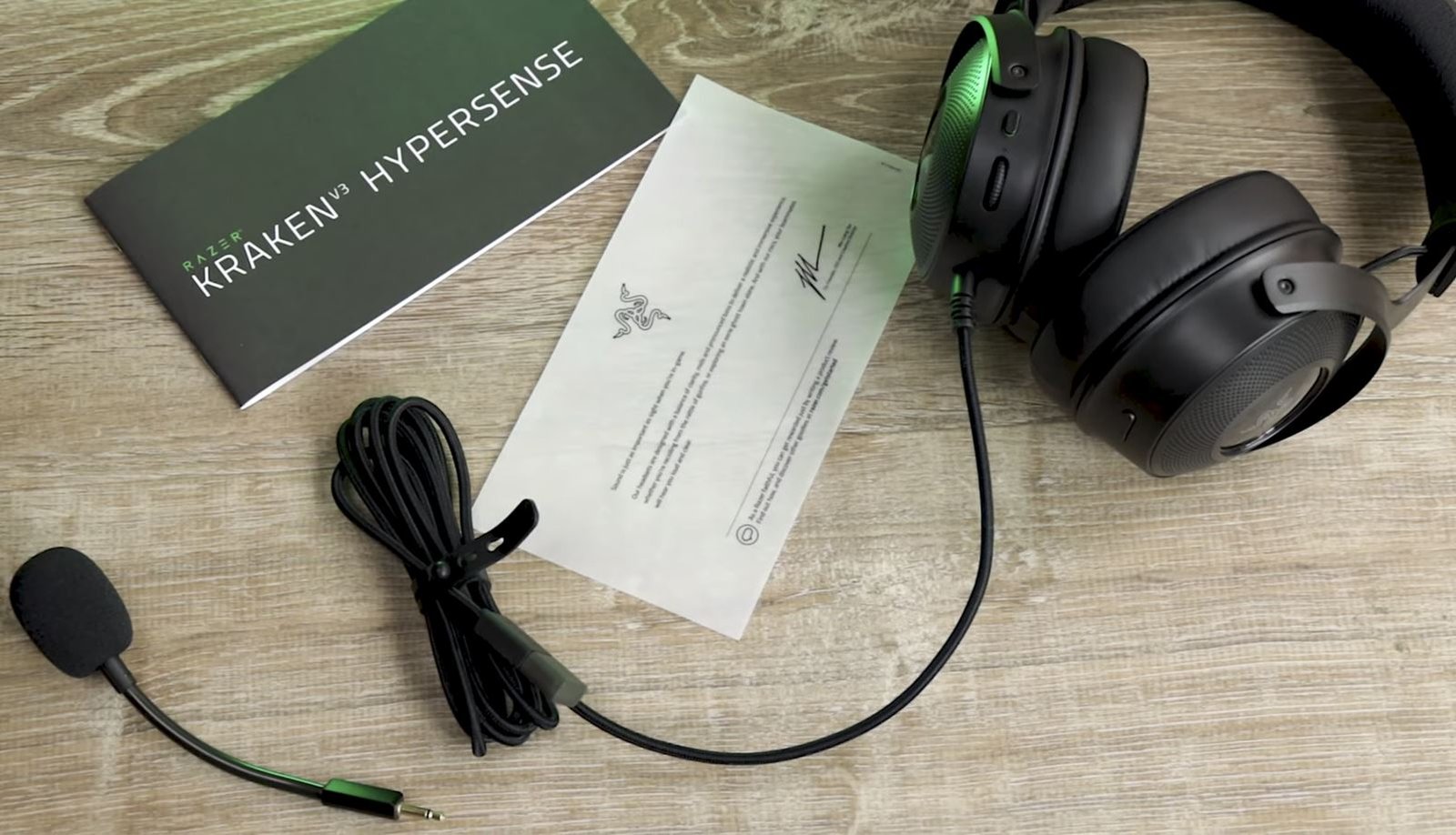 A microphone is connected to the left cup – it is standard for the Kraken V3 model, bends well, and has a foam windscreen. Between the microphone, jack, and the wire are two controls – a volume wheel and a mute microphone button. There is only one button on the right cup – with HyperSense operating modes. 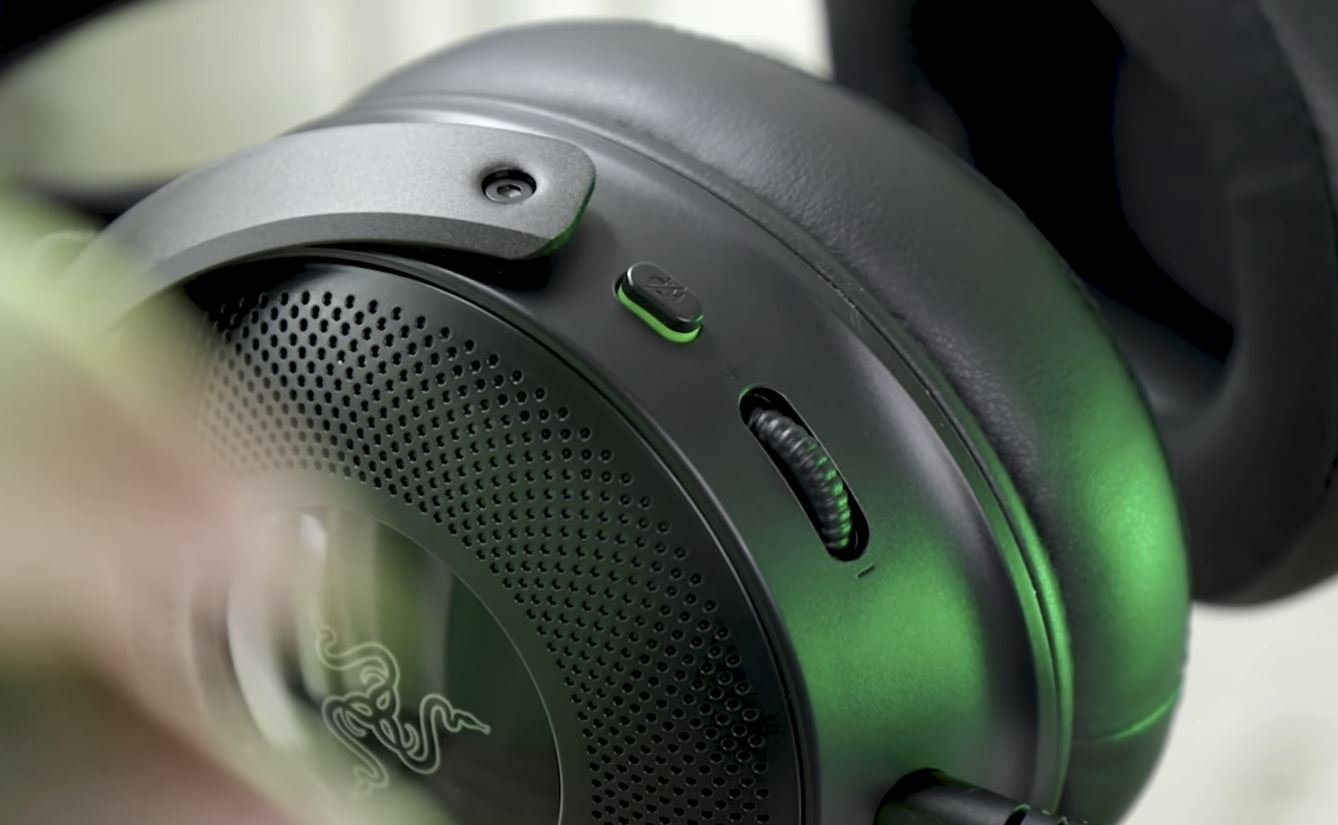 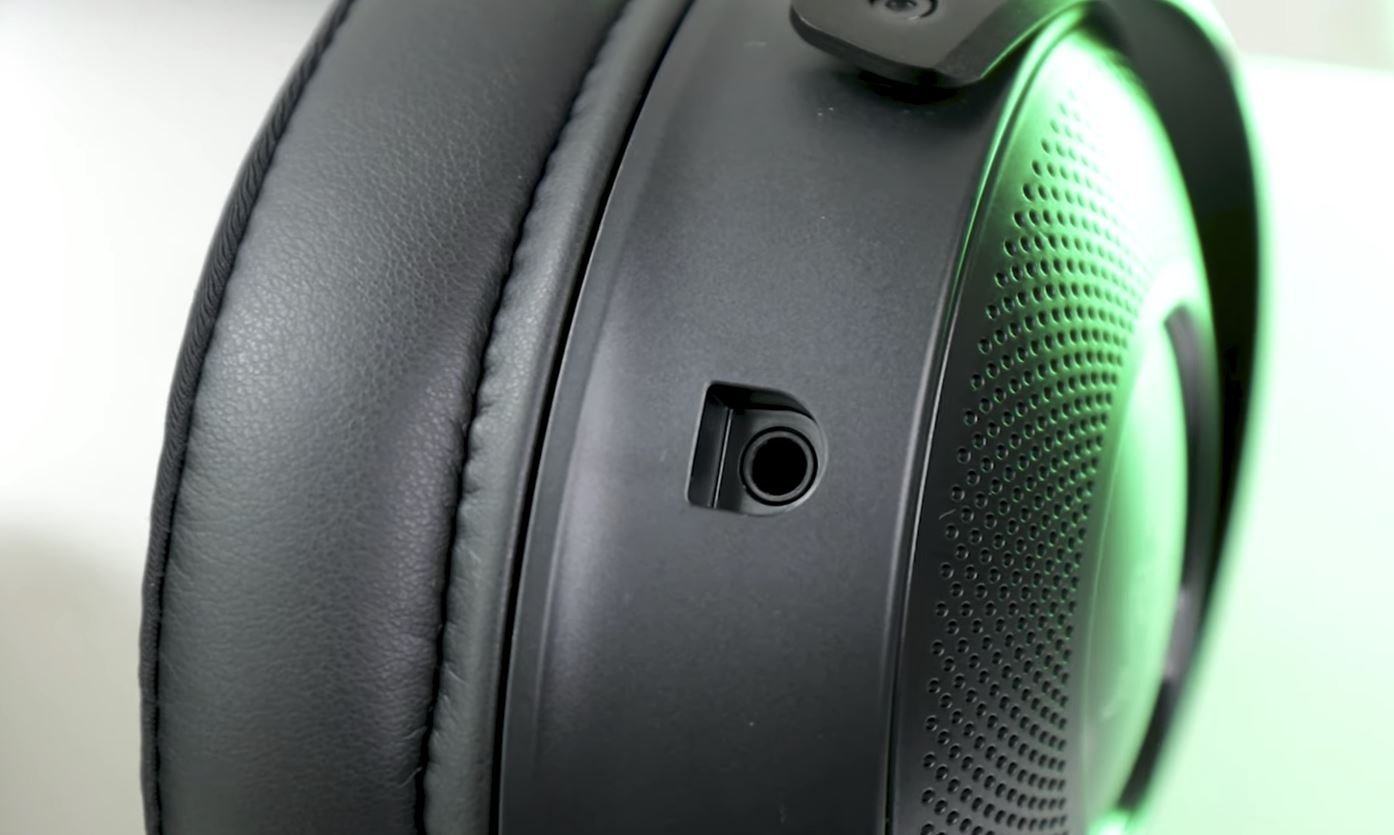 Let’s start with ergonomics. Despite a hefty 335g weight, the Kraken V3 HyperSense didn’t cause any fatigue during long gaming sessions. They sit comfortably on the head, do not press, and provide good sound insulation even when turned off. The ear cushions are not hot and very soft; the headband is also pleasant.

The assembly is very high quality; you can’t even dig into small details – the headset looks reliable.

Microphone – suitable for communication in games and with friends in Discord or Team Speak. Despite good noise reduction and clear voice transmission, we are not talking about studio recording, streaming, or creating podcasts. Any cheap capacitor option is much better.

The sound is excellent. Positioning in games helped determine opponents’ position; when listening to music, any compositions flourished, and in films, there was complete immersion.

But there are questions about the key HyperSense technology. At first glance, it works flawlessly. In shooters, you are physically shaking from explosions; you can tactilely determine from which side the danger is – some new level of high. In other genres, the effect is slightly weaker, although action and role-playing games also greatly benefit from various tactile effects.

That’s just the technology works flaws. Firstly, it has three power levels, of which the first two are practically not felt against the background of the third. Therefore, you either turn it on to the maximum or turn it off completely. And the second option sometimes seems preferable. Why?

It’s all about the imperfection of the intellectual definition of the vibration source. Explosions, impacts, destruction, shots – the headset detects all this without problems. But it also begins to vibrate during simple communication or when loud music is turned on.

The built-in motors play up any noticeable fluctuations in the sound wave, and it starts to enrage. You get used to the constant vibration; at worst, you get angry and turn it off. Razer specialists need to refine the built-in software so that such incidents do not occur or appear as rarely as possible.

But in general, the technology is very promising, and even now, it can give very vivid emotions that are incomparable to anything. This is especially true for shooters and games similar in gameplay dynamics.

Razer has a feature-packed Synapse 3 universal app that allows you to customize all of the company’s devices connected to your computer. The application takes up approximately 350 MB of disk space. The utility can be accessed both anonymously and with a Razer account. Most of the features are available in anonymous mode, but if you plan to store profiles in the cloud, it still makes sense to create a Razer account. Synapse can be used not only to customize the functions of devices from Razer but also other manufacturers. You can add, for example, support for the Amazon Alexa or Philips HUE voice assistant through additional modules. But, of course, this concerns working with Chroma RGB backlighting. 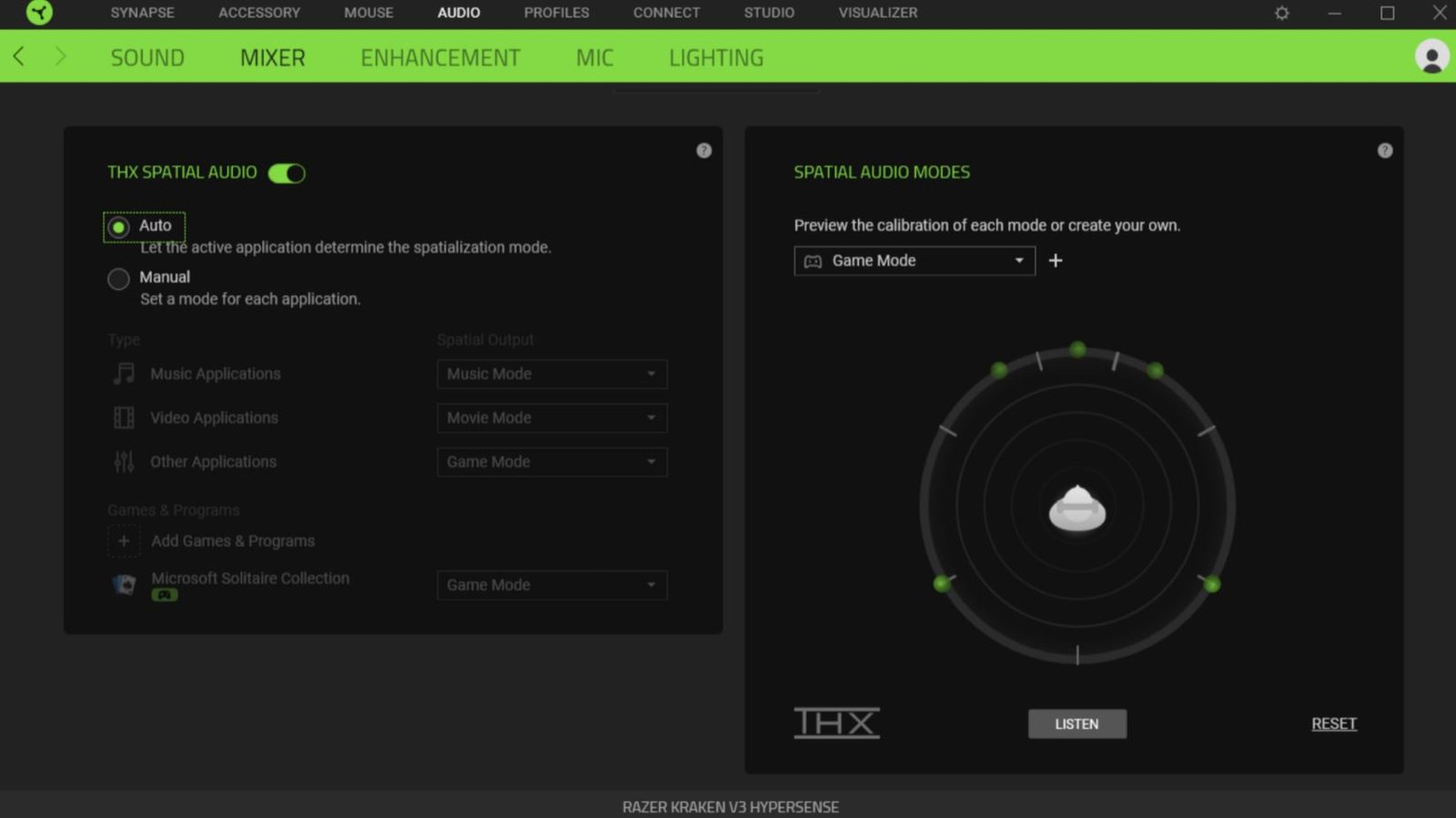 Here you can adjust the volume, the intensity of tactile feedback (although there is a separate button for this), spatial sound modes, microphone, backlight, and play around with the equalizer.

The Razer Kraken V3 HyperSense looks great – the design is time-tested, and the backlight is appropriate. On the other hand, HyperSense works well, but not perfectly, so the presence of this feature seems debatable.

Picking up the Razer Kraken V3 HyperSense is only worth it if you want to check out the HyperSense. Otherwise, at a suggested price of $120, this model doesn’t look as interesting as the regular $99 Razer Kraken V3.

The price is, of course, high. Compared to the original Kraken V3. But if you want to get acquainted with vibration motors in headsets or need just such a model, then the Razer Kraken V3 HyperSense will please.