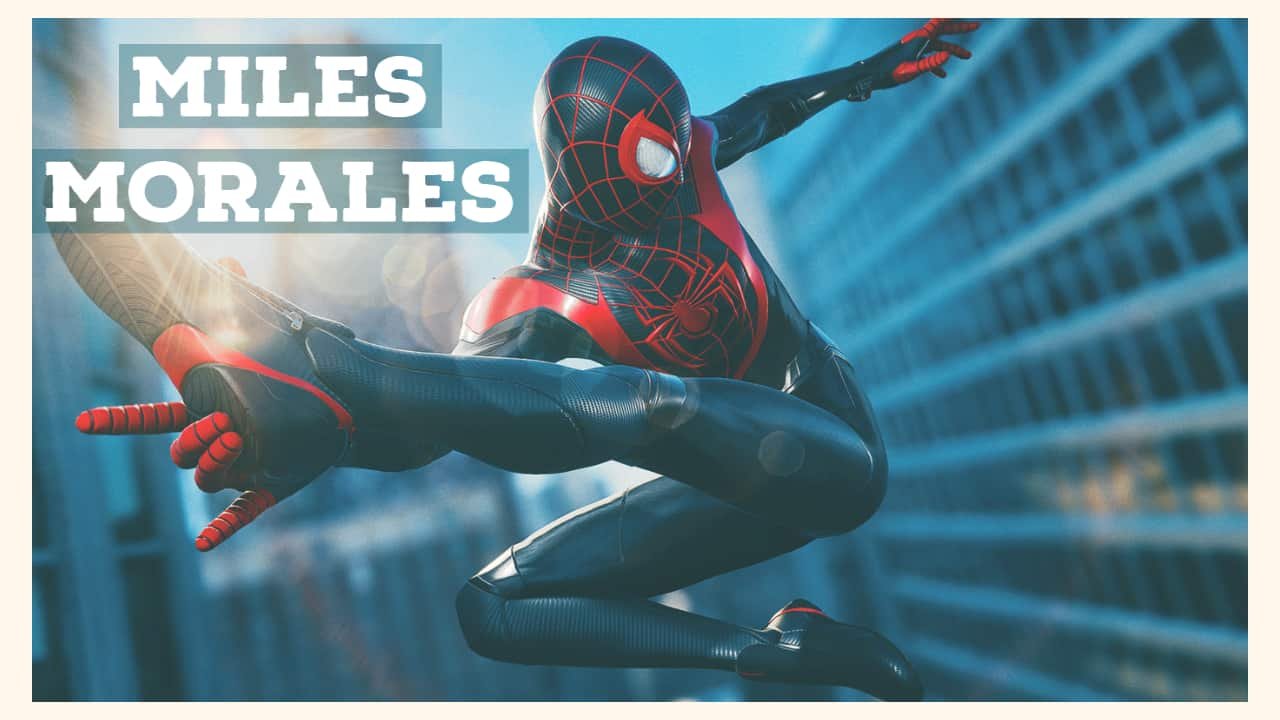 The friendly neighbor returns and rises vertiginously to new heights with the help of Miles Morales in a participant installment of the launch of PlayStation 5. We face a new incarnation of the agile arachnid that shines thanks to its emotional and powerful participation that overflows with tons of personality; the result is a Spider-Man who asks nothing of the original and stands out on his own.

But that’s just the character, and the good news is that the game also stands out on its own as a stand-alone expansion that keeps the best of its original and improves on some sections of what was already an excellent superhero game, but will it achieve captivate in the same way as its predecessor? Stay with us because we will tell you right away how Spider-Man is: Miles Morales.

The first feeling is that this game is much more than an expansion, despite offering a considerably smaller extension to the original. The amalgamation of the game systems, characters, and the story has closeness, empathy, and emotional attachment.

Thus, the story offers us the solo adventure of Miles Morales, an ordinary boy who acquired powers by an accidental bite of a genetically modified spider. Now, from the hand of the original Spider-Man, Peter Parker, he must learn the tricks of the trade of the friendly protective guardian of Manhattan. Still, he will have to do it quickly because Peter has a business trip to Europe pending, which leaves the Young and unexperienced Miles Morales as the only Spider-Man in Manhattan.

This is how the story takes flight, with the participation of Miles Morales – characterized by Nadji Jeter – who feels honest, realistic, and empathetic; that of a young man who has doubts, insecurities, and, above all, hope and trust in his loved ones. And it is precisely this feeling of closeness that it shares with the story, which is based on a large-scale conflict that is closely meshed with the Harlem community north of Manhattan where, by chance, is the home of Miles Morales.

The story is primarily limited to one neighborhood on the stage, which denotes the limited spectrum and scope of Insomniac Games’ work and reveals that, in effect, Miles Morales is a stand-alone expansion pack based on the game that debuted 2 years ago. Years. However, it does not feel like a job that reuses everything from the original since the stage is covered in snow, indicating its proximity to the end of the year festivities, which gives us a different visual experience.

On the other hand, it keeps the signature gameplay that enchanted and delighted countless superhero fans a couple of years ago. For example, the action of catapulting you at full speed and swaying vertiginously through the skyscrapers of Manhattan or at ground level on the streets remains unchanged. Without much fear of doubting, it is one of the most satisfying locomotion methods in video games.

Likewise, combat remains true to the original with a system that inherits established principles refined over the past decade. The feeling is one of power and agility with Miles Morales landing punches left and right from an extensive list of moves; at the same time, dodge and lift your enemies into the air to continue connecting combos that finish with extravagant movements punctuated with stylized camera close-ups.

But let’s not forget that this Spidey is totally new, so underneath his repertoire of movements, he now adds special characteristics, which you will discover as the story progresses. Thus, Miles Morales can execute special attacks by connecting blows and dodging the assaults of his enemies, unleashing his arachnid arsenal in powerful electrical attacks that stun his adversaries.

Miles Morales is agile, intelligent, and charismatic, but he is not a detective

At the same time and true to the source material, Miles Morales can blend in with the environment and become practically invisible. This feature opens up opportunities for stealth before and during combat, resulting in a satisfying amalgam of action and subterfuge that shines through in tight situations. Unfortunately, the stealth sections required by the script, for example, when you must investigate using this skill, are not the best activities of the pack: Miles Morales is agile, smart, and charismatic, but he is not a detective.

Despite the above, Miles Morales is in his own Spider-Man, and we say it thanks to the injection of personality he receives. We do not say it because he is a new character, but because he exudes style and personality with each breath of fresh air, he takes his gestures and body language to his involuntary actions. For example, the way he pirouettes with each swing of his web tells us a lot about his behavior and personality. The same can be said for their performance during combat, especially in dramatic close-ups during kills against enemies. Despite all the above, we think that the opportunity to change the presentation of the character was missed because, in the end, Miles Morales does not differ from his predecessor despite being fundamentally different.

On the other hand, as we said, this adventure is an expansion and therefore does not share all its scope or vision concerning the original delivery. You can perceive a better approach focused on the activities that you will find throughout Manhattan during your adventure. . In Spider-Man: Miles MoralesThe traditional pursuit of activities awaits you that are scattered throughout the stage, which, this time take the form of side missions, crime, and artifact hunts, and other activities on the rooftops and parks of Manhattan. For example, the previous Spider-Man left a series of virtual training for Miles Morales to overcome to gain valuable skills; there are also the settlements full of enemies, boxes full of tools, among others. In short, the variety is not that wide, but it fulfills to keep you busy while you complete the main story and later, when you finish it.

All activities reward you with artifacts that you use to upgrade your costume. And speaking of costumes, in Miles Morales, you can unlock more than a handful of amazing and colorful outfits. The interesting thing about these is that each one unlocks a modifier that you can use in conjunction with others to transform your abilities; it must clarify that this does not mean that each suite has a unique behavior.

The variety is not that wide, but it fulfills to keep you busy while you complete the main story and later when you finish it

Miles Morales grows powerful with every action he takes and earns experience points that he spends on a skill tree divided into combat, special powers, and stealth. The only thing we did not like is that it is restricted by level, that is, you will not be able to learn any skill unless you are of a certain level, although at the same time, it is not that it matters much because you level up as you advance by the skill tree. Our point is that if we removed that restriction, progress would not be affected.

We predict that it will not take you more than 8 hours to complete the main story with a minimum deviation towards secondary activities, which is a considerable amount of hours extended with the completion of additional tasks and doubled with the new game plus mode. In this sense … yes, Spider-Man: Miles Morales is considerably short but still has enough to entertain you for a long time. 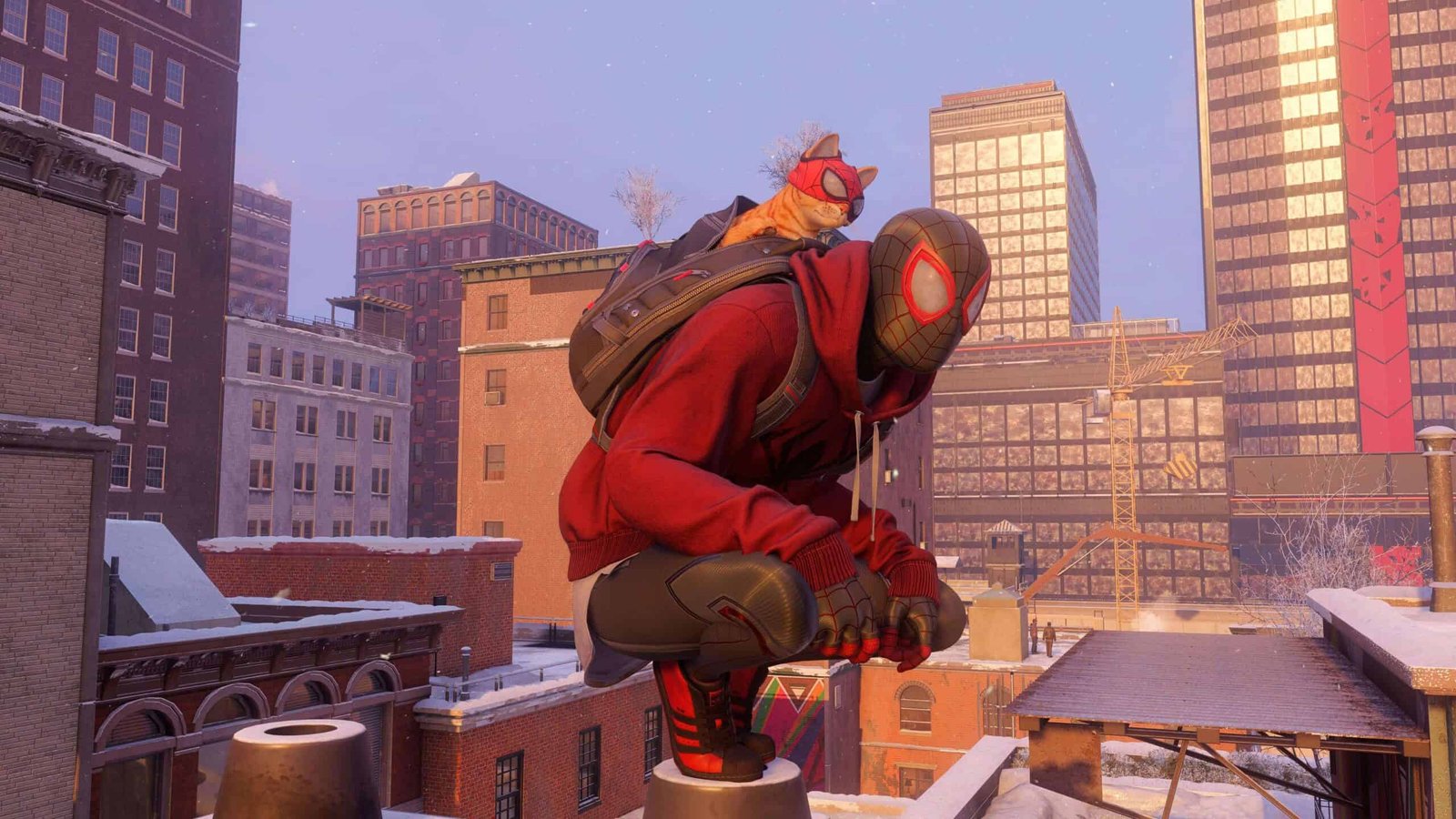 Regarding the visual quality, we have no complaints of any kind. Spider-Man: Miles Morales is a game that looks extremely good no matter what platform you decide to play it on. This review was made from experience on a PlayStation 5. However, we also played it on PlayStation 4, and the feeling is almost the same. We emphasize “almost the same” as, in general, it is a game that looks good.

However, PlayStation5 is where you get a new dimension of quality thanks to the added features of the console. For example, it offers us ray tracing on different surfaces, better character models, and, in general, a higher quality technological implementation throughout its 2 video options. One is Fidelity, which prioritizes an experience in 4K, with additional effects in shading, ray tracing, with a count of 30 frames per second that are perceived as stable.

We enjoyed every second of the fluidity of the combat and the fast-paced action as we swayed across Manhattan.

The other is the Performance mode, whose priority is to offer an experience at 60 frames per second but sacrificing some of the improvements of the fidelity mode. This experience is the one we enjoy the most. Despite the lack of resolution, it was challenging, even impossible, to notice the differences between the leaps of resolution in the middle of combat. Mind you, and we enjoyed the fluidity of combat and fast-paced action every second as we swayed across Manhattan.

The verdict is that while the PlayStation 5 is the ultimate visual experience, the PlayStation 4 is not far behind. It is important to note that our experience was affected a couple of times by some errors, for example, inoperative goals that prevented us from progressing until the checkpoint was reset and even errors that left our PlayStation 5 frozen. It feels like delivery to the one that lacked a couple of percentage points of polish in its final stage.

Finally, we must mention the disappointing implementation of the DualSense, the new console controller that is pointed to as one of the differentiators of the generation. Here we note an implementation almost by compromise that did not take advantage of the benefits or capabilities of the command in an impactful way. The haptic function is forgettable, while the adaptive triggers are hardly used. Anyway, we would have liked an implementation with greater degrees of imagination, but for this, we will have to wait longer.

Thus we arrive at the final verdict of Spider-Man: Miles Morales, of which we will say that it is a solid delivery from the friendly neighbor, that is, a yes with all of the law that shows us that the city of Manhattan has a lot of potentials to offer new and varied stories of this young Spidey. Perhaps we are talking about the founding of a profitable franchise that operates with game models with short but defined scope and length, that feels like a compilation of a comic series previously published in single issues and that in the future could be extended into another. TPB.

The game shines for offering a personal and endearing approach to its protagonist. At the same time, it uses the best cards, forgetting the lethargic progress of its original version. Miles Morales is a pure personality and unmatched style. Recommended.

Related Topics:GAMING REVIEW
Up Next

Plants vs Zombies: Battle for Neighborville