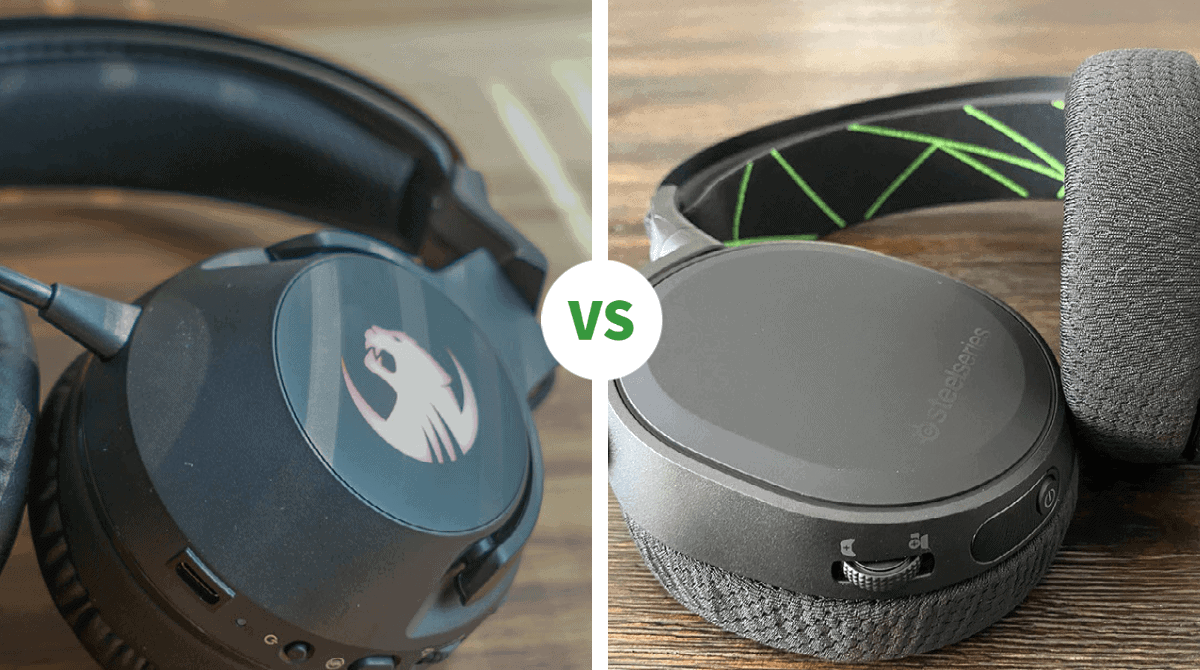 It cannot be denied that the wearables market is now absolutely dominated by all kinds of small, truly wireless headphones. People love the lack of a cable and, despite having to remember to charge such equipment, it seems to be just a minor inconvenience that most have long since resigned to. Certainly, the popularization of such a solution is also “helped” by the policy of the largest smartphone and tablet companies, which, hand in hand, decided to remove the headphone connector from their most expensive devices.

Roccat Elo Air 7.1 is a paper-based proposal aimed at the demanding consumer who wants to feel more freedom due to the lack of a cable and at the same time not to spend too much on the sound quality or the design itself. Did the SteelSeries Arctis 7X make these dreams beat Roccat Elo Air 7.1? Let’s find out and which one is better? 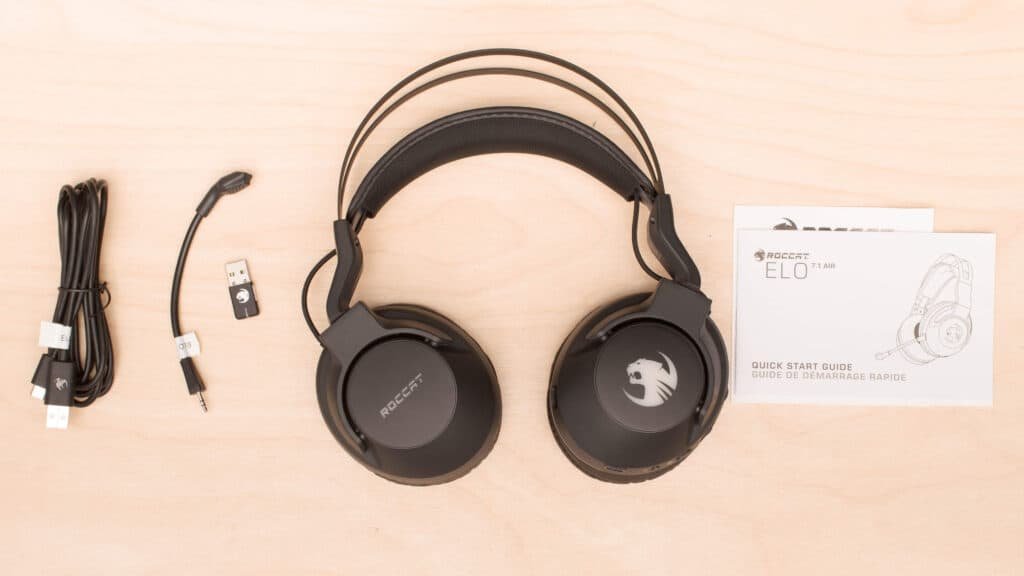 Roccat is a German manufacturer of computer accessories whose product line is quite focused on players. Mice, keyboards, or headphones are the main weapons used by the company, belonging to the Turtle Beach Corporation since 2019.

Today we will take the Roccat Elo 7.1 Air model. This proposal aims to attract attention primarily with its light construction, long battery life, and 7.1 surround sound. Add to that the declared high sound quality and competitive price, it can be a perfect choice in its class.

Looking at the specifications on paper, it’s hard to fault anything. The sales kit is complete. The presence of a long charging cable (2 meters) is very nice. When the battery is about to discharge in crises, there should be enough cable to connect it and use it relatively comfortably. 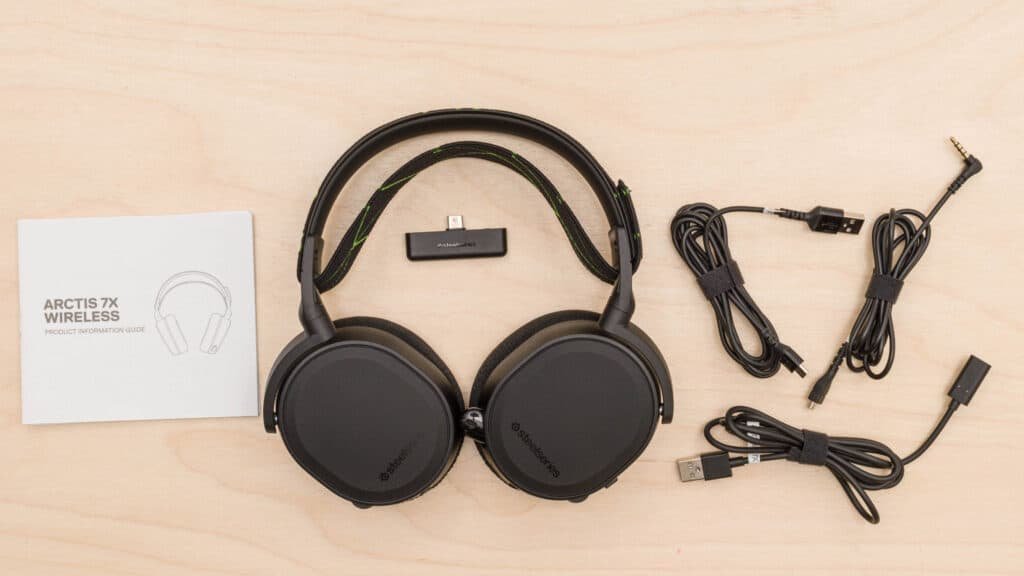 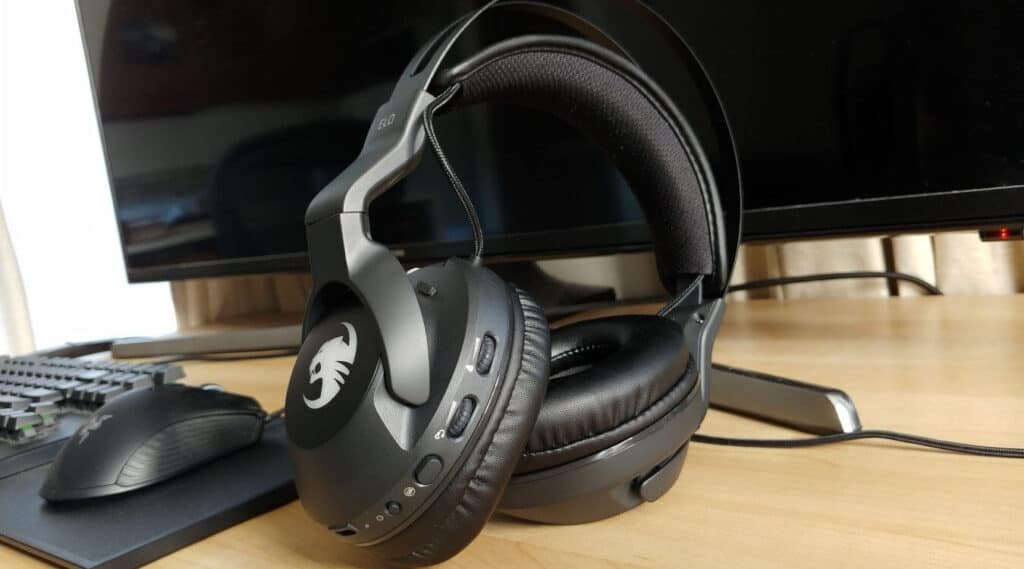 When it comes to design, the designers chose a subdued style. Honestly, if it weren’t for the optional RGB lighting on the right and left outer earcups, we wouldn’t have tossed these headphones into the “gaming gear” group. The hardware engineers decided to use matte plastic, thanks to which keeping the headphones clean is much easier.

The Roccat Elo 7.1 Air model uses a metal headband, which – according to the manufacturer – is to adjusts itself to the user’s head. The rotating earpieces, filled with foam with a shape memory effect, will also contribute to the high comfort of use. Roccat believes they have found a solution that will satisfy the eyewear as well. Thanks to using two layers of filling the earpieces, one of them reduces the pressure on the glasses frames.

Roccat decided to move all the controls, sliders, and charging connectors to the left side of the headphones, keeping the right side intact. What is nice is the fact that Roccat Elo 7.1 Air can be charged via the USB-C port. More and more manufacturers decide to abandon the well-worn micro USB connector, although today you can come across an unpleasant surprise. Port unification means that instead of keeping two cables for charging a smartphone and headphones separate, there is a greater chance that it can be solved with a single cable. 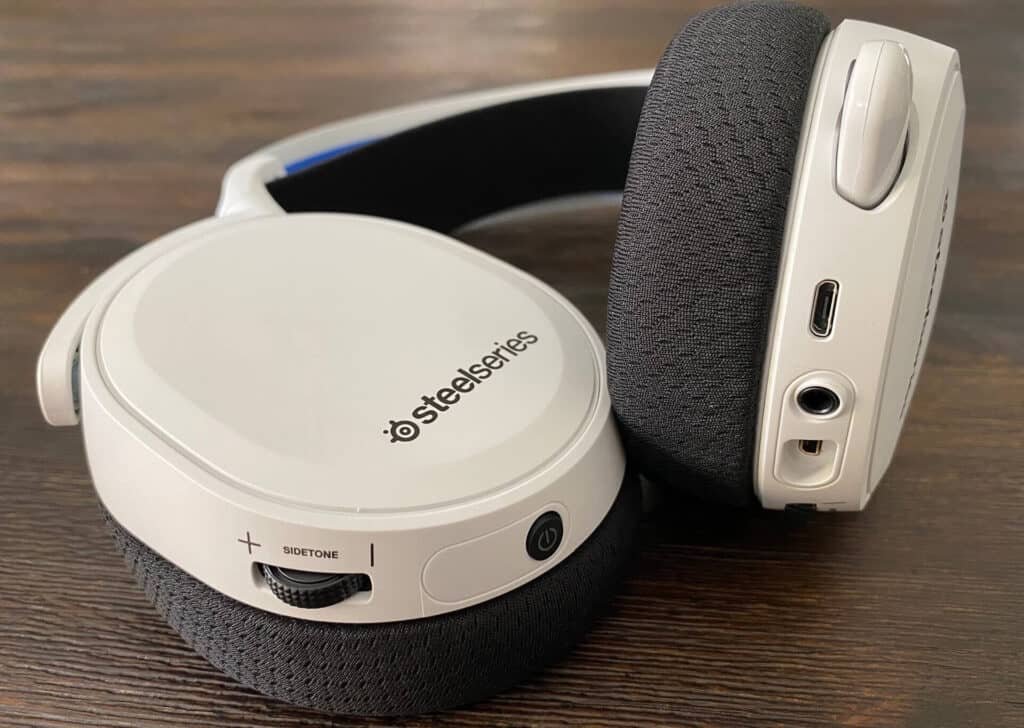 The appearance leaves no doubt – it’s SteelSeries. At first glance, without looking at the manufacturer’s logo, every player, even a player with a medium-sized mind, will guess what company is behind the Arctis 7X.

The specific, quite minimalist casing of the earcups, combined with a comfortable headband, can be liked and distinctive. SteelSeries can be satisfied with that because the Arctis brand is already widely known and liked by players – at least by most players.

The build quality itself also suggests this. Putting the SteelSeries Arctis 7X on your head gives you the feeling of being in a high-class product. Nothing creaks here, everything fits well, and the plastic itself, most of which the headphones are made of, is very satisfactory.

Just like the material earpieces and the flexible headband. The whole thing also seems light, especially for a wireless design with such capacious batteries.

When it comes to battery life, this is one of the brightest points of the headphones in question. The manufacturer declares that Roccat Elo Air 7.1 can withstand about 24 hours on a single charge. Assuming a daily game of 3 hours, they are supposed to last for a whole week of use. In fact, the working times I could extract from the headphones were even 2-3 hours longer than those declared by the manufacturer. A delightful surprise. It takes about 3 hours to charge the headset from 0 to 100%.

The 12 hours of operation declared by the manufacturer are not exaggerated—quite a good result considering the weight and dimensions of the Arctis 7X. Furthermore, you will not get any problems with the range; the headphones lost the signal only after 10-12 meters away from the transmitter. 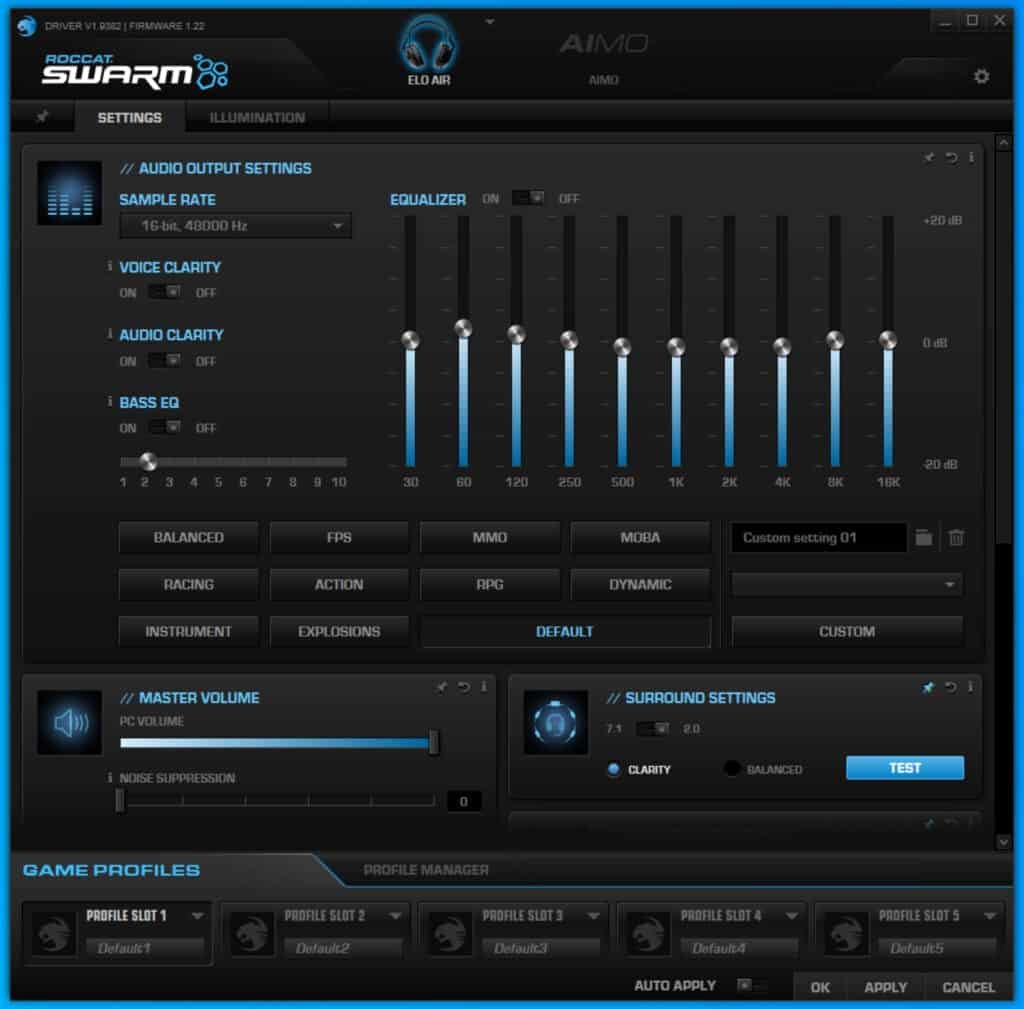 The headphones connect to our computer wirelessly thanks to the USB-A transmitter operating in the 2.4 GHz range. This is the only connection option. So you have to remember that one USB-A slot on the device will be occupied while using the set. The instructions attached to the headphones describe the configuration with classic PC and Mac devices, while the manufacturer’s official website mentions only Windows.

In addition to the connector, we also find two sliders. One is classic to control the volume, while the other allows you to change the voice chat balance. This is a very cool solution that guarantees that even in the middle of a loud game, there is no need to go to the desktop and turn up our interlocutors’ volume. However, it is a pity that the creators did not decide to move the sliders further apart.

RELATED:  Side by Side Comparison: HP Omen Mindframe vs Kingston HyperX Cloud Alpha 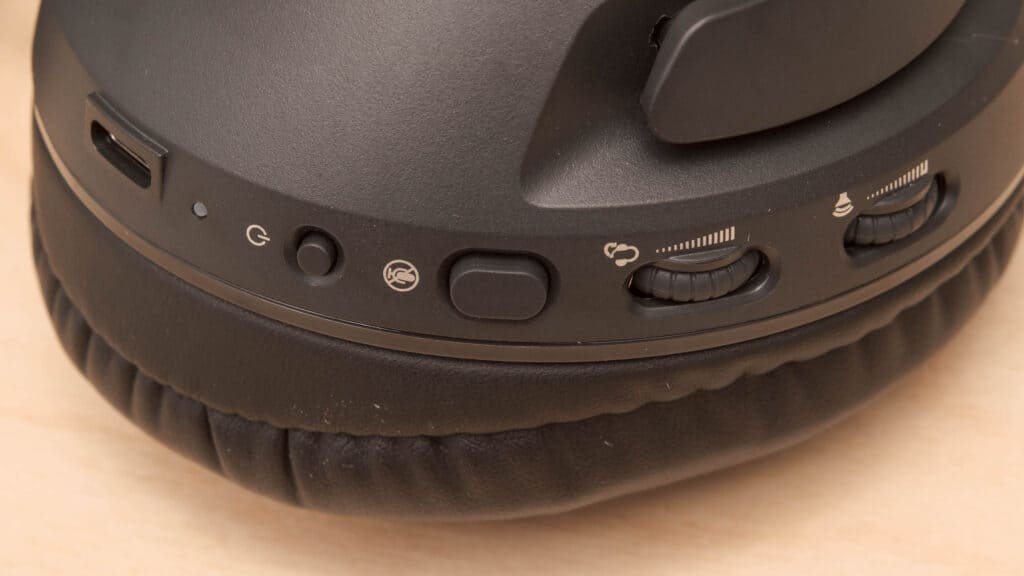 There are also two buttons. Small and big. The larger we mute the microphone, the smaller one is responsible for powering and pairing the headphones. Here, the designers did not make the mistake of the sliders. Even though they are close to each other, their size and a much more distinct click immediately suggest which button you are touching, which makes them impossible to confuse with each other.

It is also worth mentioning the presence of a tiny, two-color LED that has several uses. It informs us about the connection status, pairing mode and also warns us about a discharging battery. It may change to red or white depending on the situation. It is so clear that it is impossible to miss it. The same diode can be found on a small USB-A transmitter, which must be connected to the computer to use the headphones. This, in addition to information about the device connection status, will also inform with another color (pulsating red) about the disabled microphone. 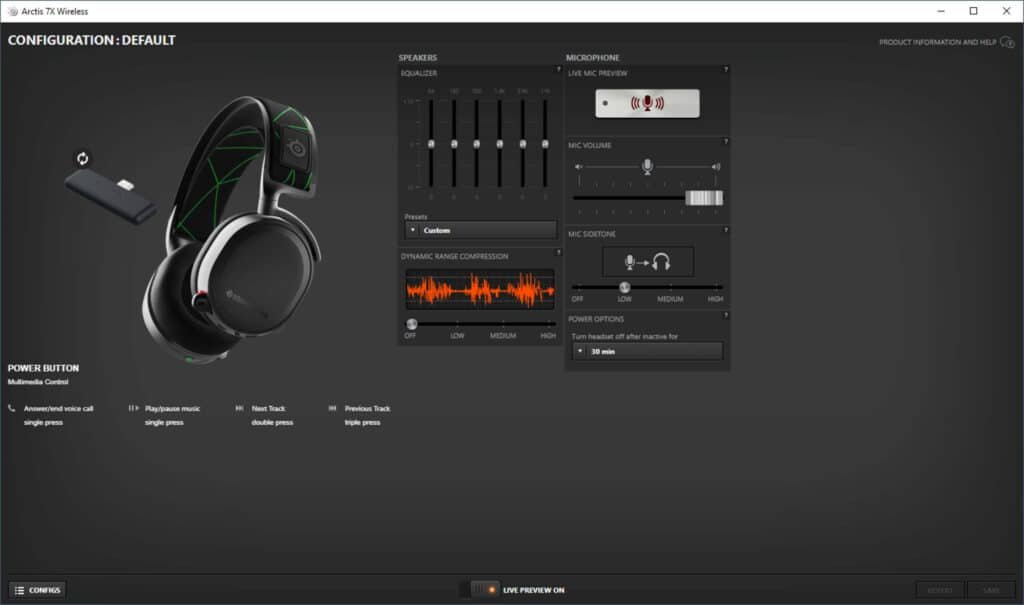 We find a special USB-C transmitter in the box, which we connect to the console or PC of our choice. We can do it directly or indirectly through a cable that acts as an adapter for traditional USB-A. That’s it; everything works immediately after connecting the transmitter.

Or at least if we connect headphones to PlayStation 5, PlayStation 4, Nintendo Switch, or PC. When we connect the transmitter to the Xbox One or Series, we have to switch the switch from “USB” to “Xbox” on this small device – at the beginning, I forgot about it, but after a while, it quickly became a habit. Unfortunately, this step is required by the design of the Microsoft console. 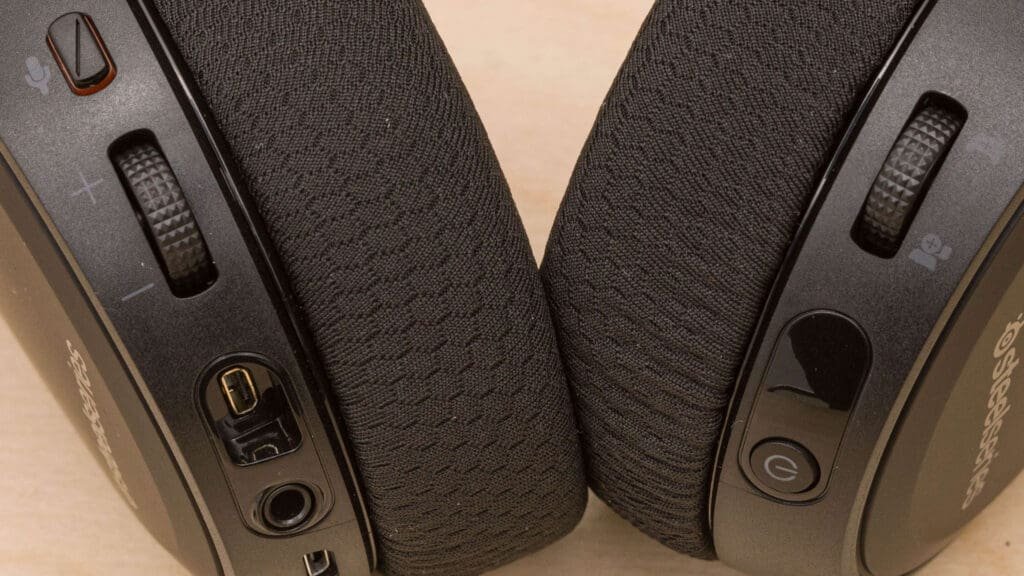 Of course, we can mute the microphone with a special button on the left earcup (which is surprisingly easy to find). Red lighting on its tip informs us about the microphone’s operation – the backlight means that the microphone is completely muted, while the lack of lighting – its operation.

Unfortunately, charging occurs via the micro USB cable, accompanied by a red microphone mute lamp, which then serves as information. The charging process itself is not very fast, but it is worth noting that we can use the headphones in an emergency in a wired way after connecting the appropriate (and included in the set) cable.

Roccat Elo 7.1 Air is an exciting choice in the group of over-ear, closed wireless headphones. The sound quality may not be exceptional, but the device can positively surprise the comfort of use (even with glasses!) And very decent voice recordings from the set microphone.

In addition to the excellent battery life, a Pleasant, not aggressive design means that the headphones should prove themselves during gaming sessions and during conferences and online classes that are extremely popular nowadays.

The SteelSeries Arctis 7X are boring headphones… but in a positive sense. The Arctis series models have just accustomed us to the high level of performance and audio.

The only thing that distinguishes this model from its other “brothers” is its versatility, focused on conveniently connecting the headphones to many different platforms. It seems to me, however, that this is a function intended for a fairly narrow audience – this is probably why the manufacturer himself mainly advertises the SteelSeries Arctis 7X as headphones for players with Xbox consoles. And if you buy these headphones with the thought of playing on the Xbox, it will also be a perfect choice.