With the Galaxy Tab S8 Ultra 5G, is Samsung finally able to compete with Apple’s 12.1” iPad Pro? Apple and its iPads monopolize the tablet market. The Californian certainly did not invent the concept, but he knew how to make it evolve intelligently.

With a 14.8” diagonal screen , the Tab S8 Ultra is impressive. However, it remains transportable in a bag, its wasp waist (5.5 mm thick) and its contained weight (728 grams) allowing it to be forgotten. Samsung has designed it around a perfectly machined metal chassis, the front side being covered with a sheet of Gorilla Glass 5 from Corning. A fingerprint reader takes place under the screen. Of optical technology, we consider it reliable and reasonably fast. 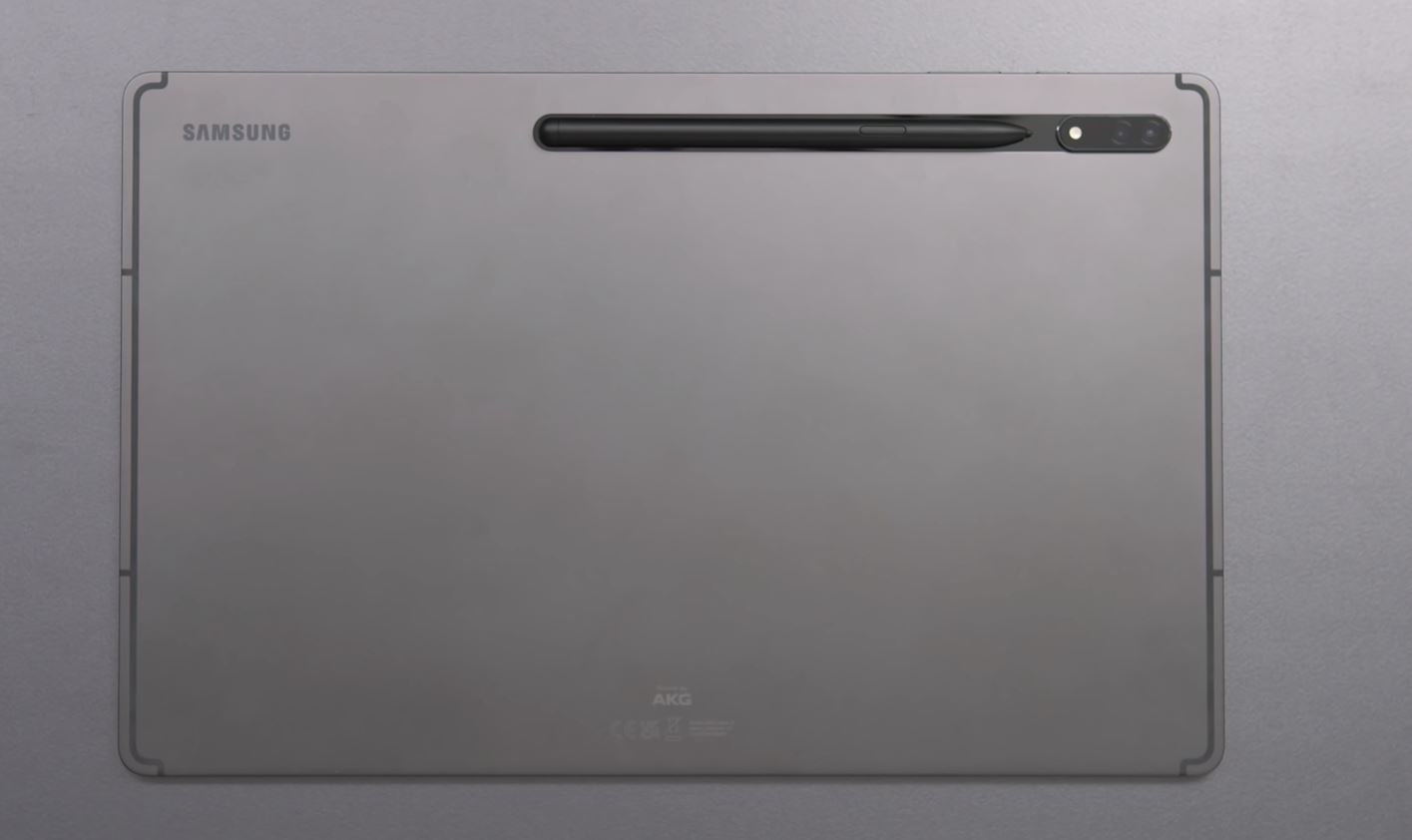 The USB-C port keeps company with a drawer that can accommodate a micro SD card as well as a nano-SIM. The good old 3.5 mm audio jack is absent, the finesse of the device does not allow its integration.

We find on one of the sides the traditional mechanical control keys (volume and power), its opposite receiving a discreet proprietary magnetic connector. It would be to connect an optional keyboard. 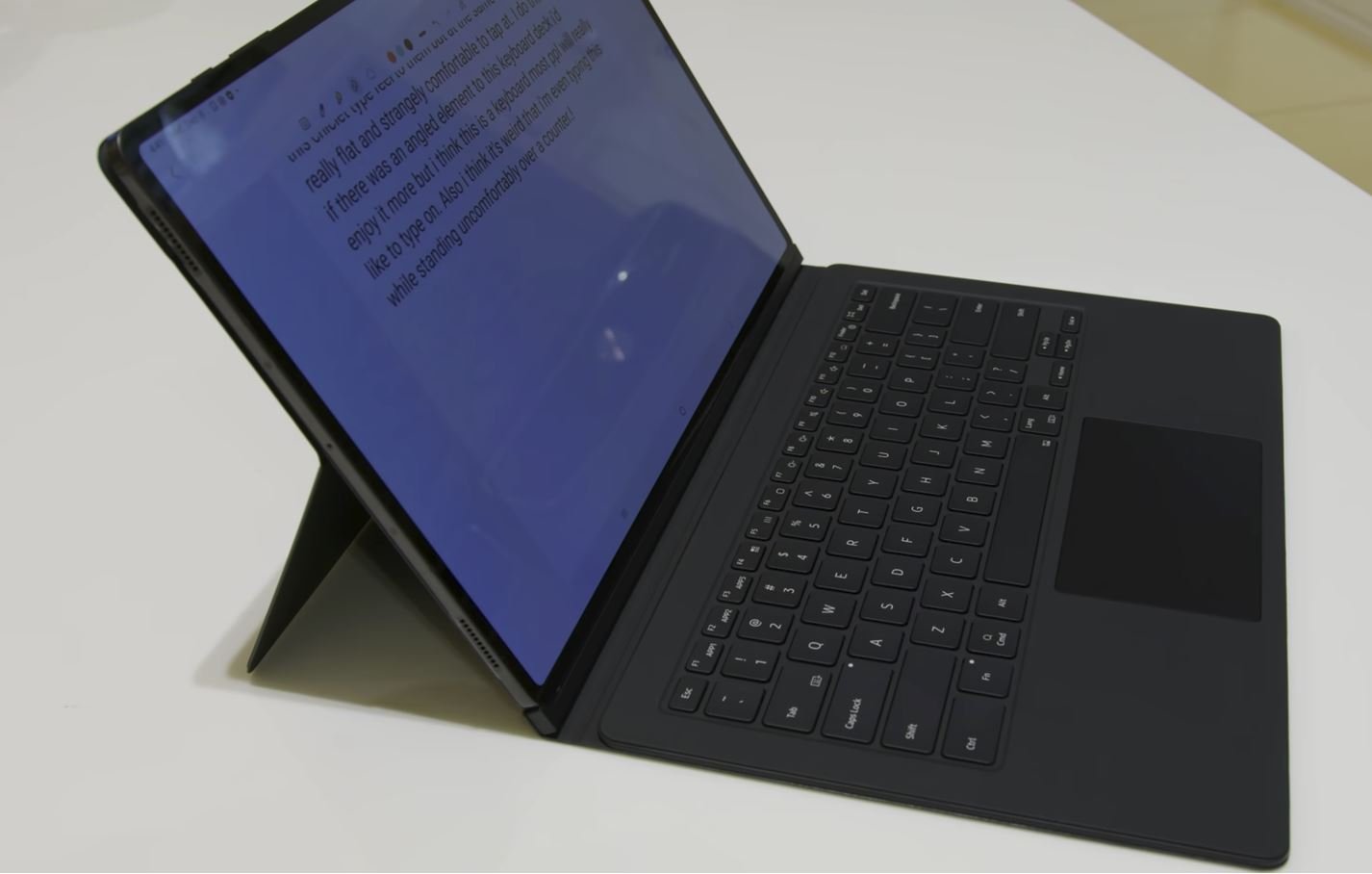 Note also the presence on the sides of four groups of perforations passing the sound generated by as many speakers.

Consisting of two modules, the front camera takes place in a notch housed on one of the long sides of the screen. This choice is explained by Samsung’s desire to favor using the S8 Ultra 5G horizontally rather than in portrait mode.

The back side houses the back camera as well as a magnetic slot for the S-Pen. It allows it to be recharged and stored when not in use. Even if it is not very practical, this mechanism has the advantage of reducing the risk of losing the stylus and avoiding the passage through a cable to recharge it.

The minimalist design, the impeccable finish and the quality of construction of the Tab S8 Ultra 5G make it a very pleasant object to use on a daily basis. On this aspect, Samsung is almost flawless in our opinion, the only downside being the stylus attachment mechanism, which is not always easy to use.

It is bright enough to remain visible in the sun and produces a contrasting image in all circumstances. As always with Samsung, the default color setting boosts the colors a bit to make them more pleasing to the eye. This will be corrected or not, depending on your needs  by adjusting the system parameters. 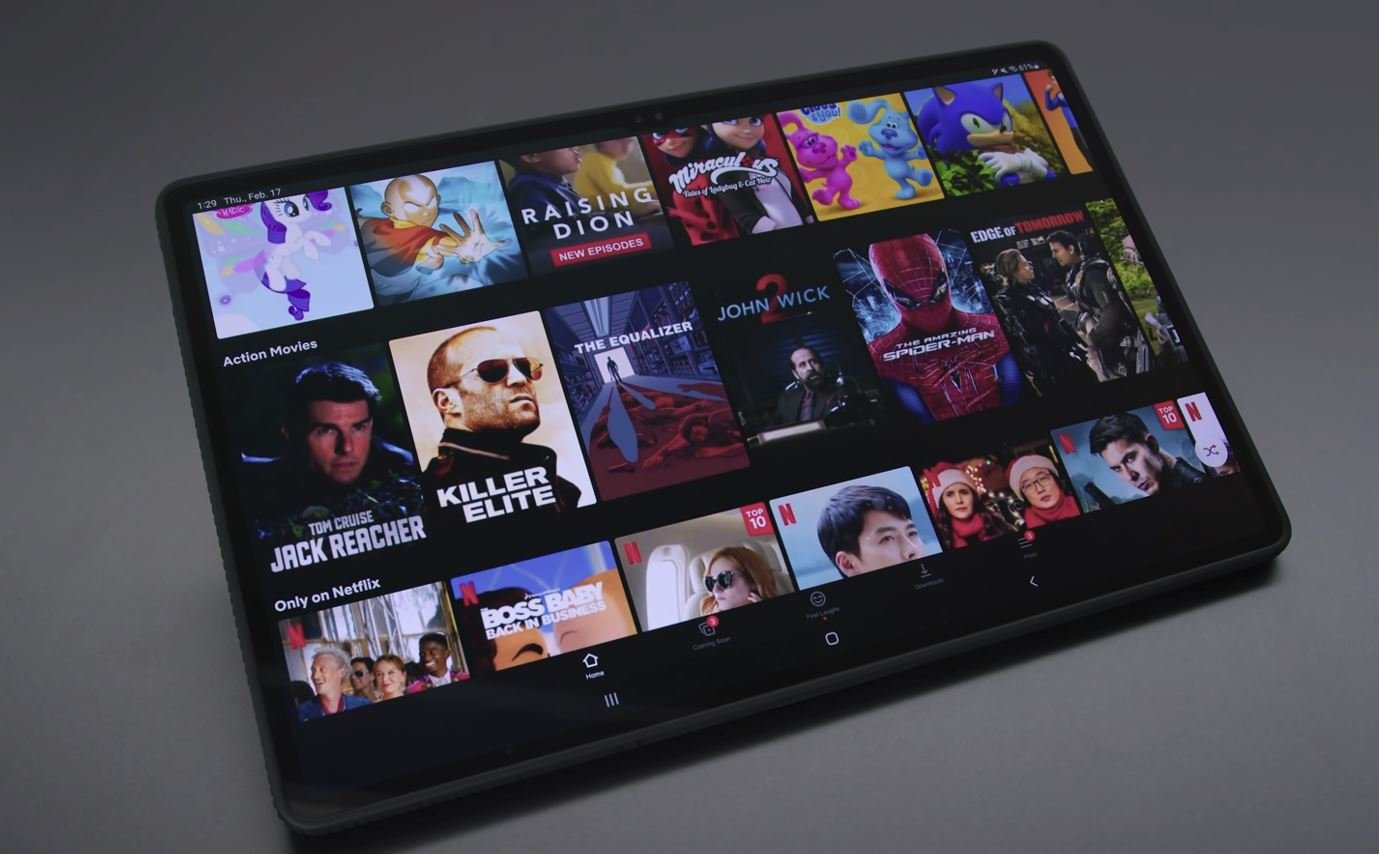 The black borders surrounding the screen are quite thin, but not non-existent: so much the better, it avoids accidentally touching the touch screen when holding the tablet. They are however not thick enough to fully accommodate the front camera, thus explaining the presence of a slight notch. This is in no way bothersome in daily use.

The screen of the Tab S8 Ultra 5G is a success, but does it compare to that of the iPad Pro? The latter uses a mini-LED LCD panel, also excellent, but a little less efficient on the contrast and the depth of the blacks. Its 4/3 format brings it closer to an A4 sheet, which may be more convenient than the 16/10th of the Samsung screen, except for video enthusiasts. After long hesitations, our preference on this aspect still goes to the Tab S8 Ultra 5G… But not by much!

Unsurprisingly, the Tab S8 Ultra 5G uses Android 12 accompanied by the OneUI house overlay. Clean and intuitive, it cleverly overcomes the weaknesses of the standard interface of Google’s system. Better still, it brings a very well thought out set of applications. If you have already used a Samsung smartphone, you will not be out of place since the applications are strictly identical. 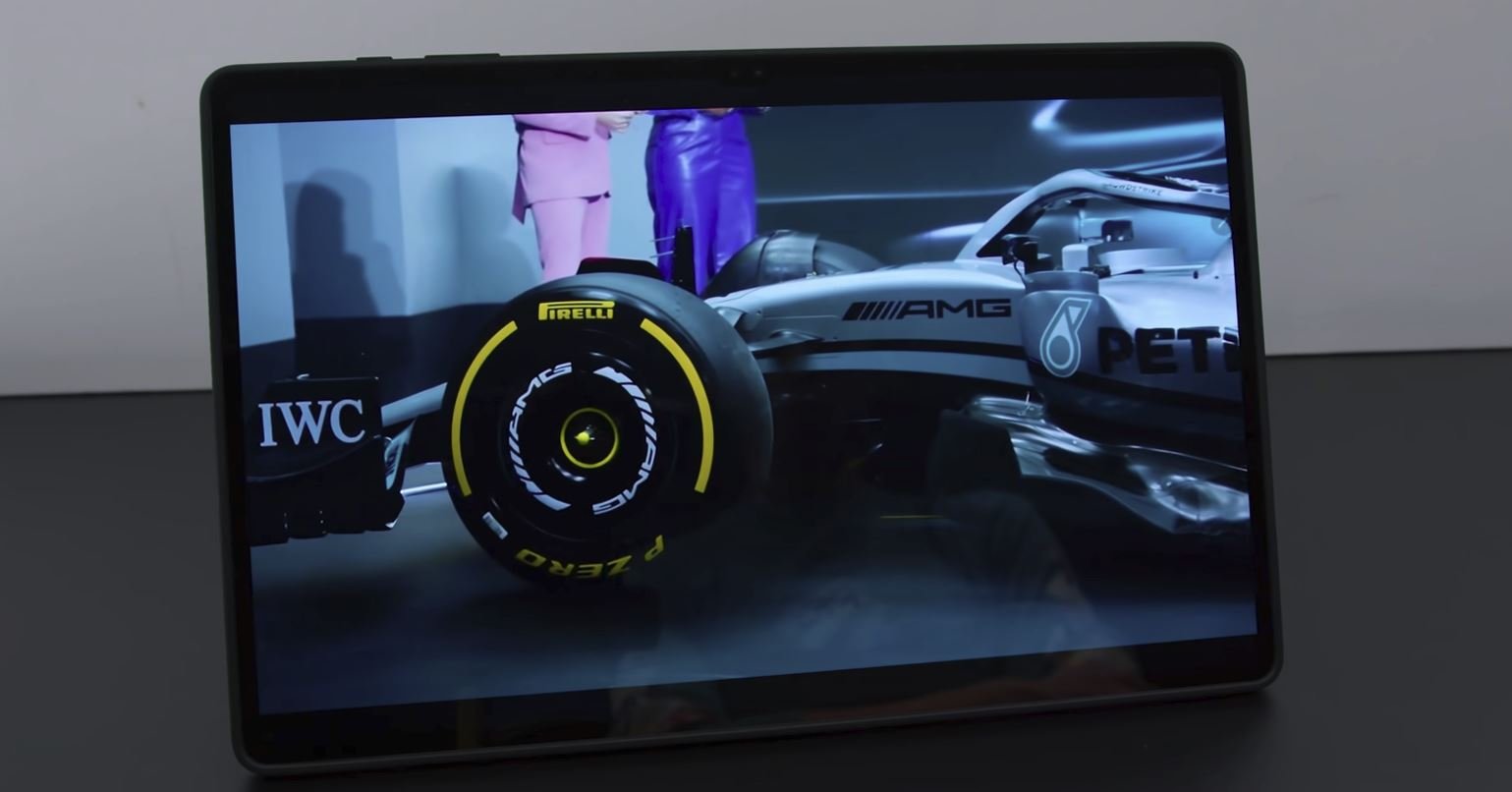 Some are almost useless (Samsung Members, Samsung Shop, etc.) and can be uninstalled without regret. Others are much more interesting, such as the alternatives offered to standard Google applications. Good point for the calendar manager and the Samsung Internet browser (based on the same engine as Chrome).

Our preference goes without a doubt to the perfect integration of the S-Pen into the OS . Supplied as standard with the tablet (hello Apple), it allows you to take advantage of the Samsung Notes electronic notebook and functions specially developed for it. Best of all, the app syncs seamlessly with Microsoft’s OneNote so you can share your notes across different devices (including Apple’s). Writing, doodling or drawing with the S-Pen is a very pleasant experience, the stylus proving to be very responsive, precise and perfectly manages the different levels of pressure. 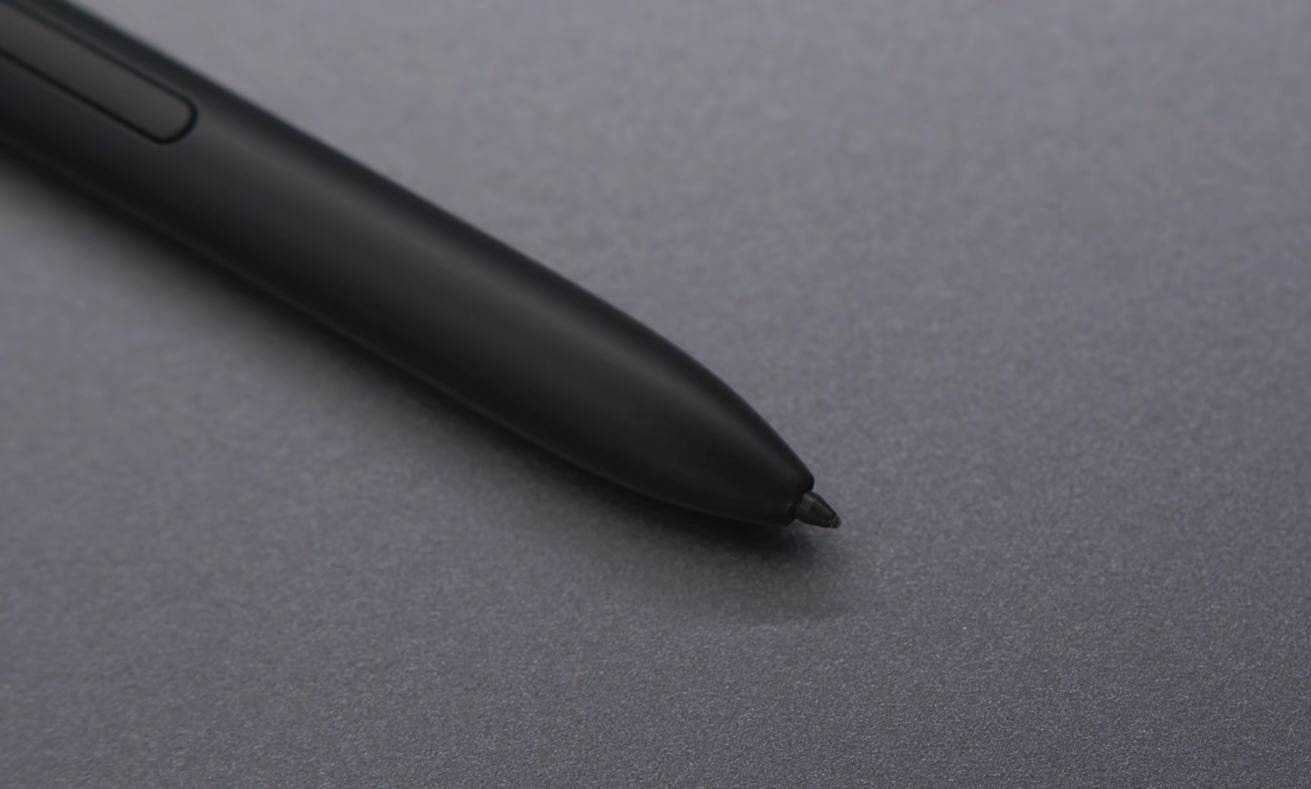 Last but not least , DeX turns the tablet into a real notebook. To do this, you will need to connect a keyboard and a mouse via Bluetooth. Another possibility is to use the very successful Book Cover Keyboard. Both protective case, keyboard and pointing device (integrated trackpad), it connects via the proprietary magnetic port fitted to the tablet.

The photo is clearly not the most important part on a tablet. That said, the Galaxy Tab S8 Ultra still has four cameras in total, two on the back, two on the front. 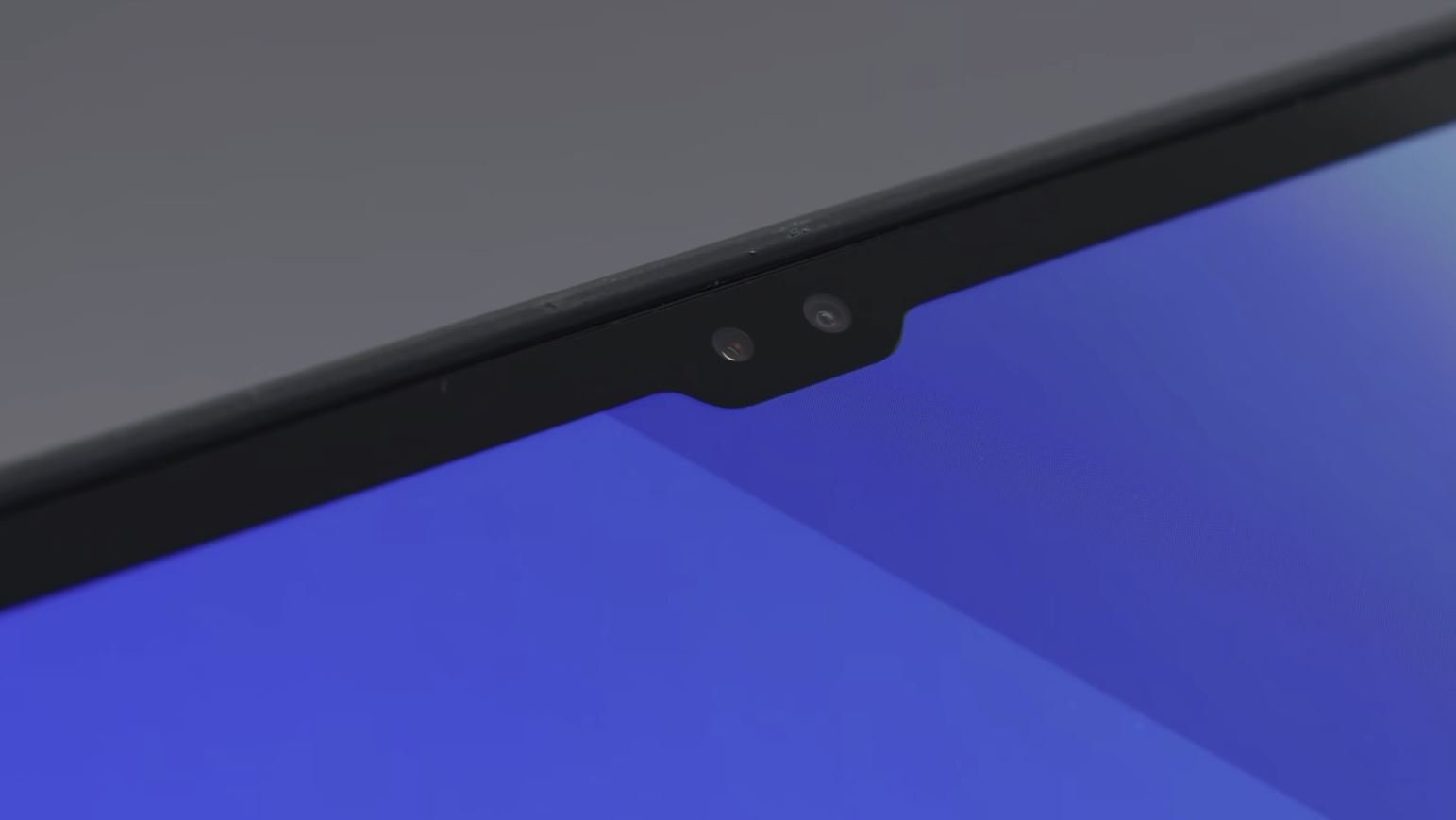 On the back, we have a main sensor of 12 megapixels and an ultra wide-angle of 6 megapixels. The photos produced are quite satisfactory as long as you remember that you are using a tablet. The colors stand out well and the level of sharpness remains at a fairly good level. If you have nothing but the Tab S8 Ultra to immortalize a scene, it will do just fine. Don’t expect superb dynamics management. 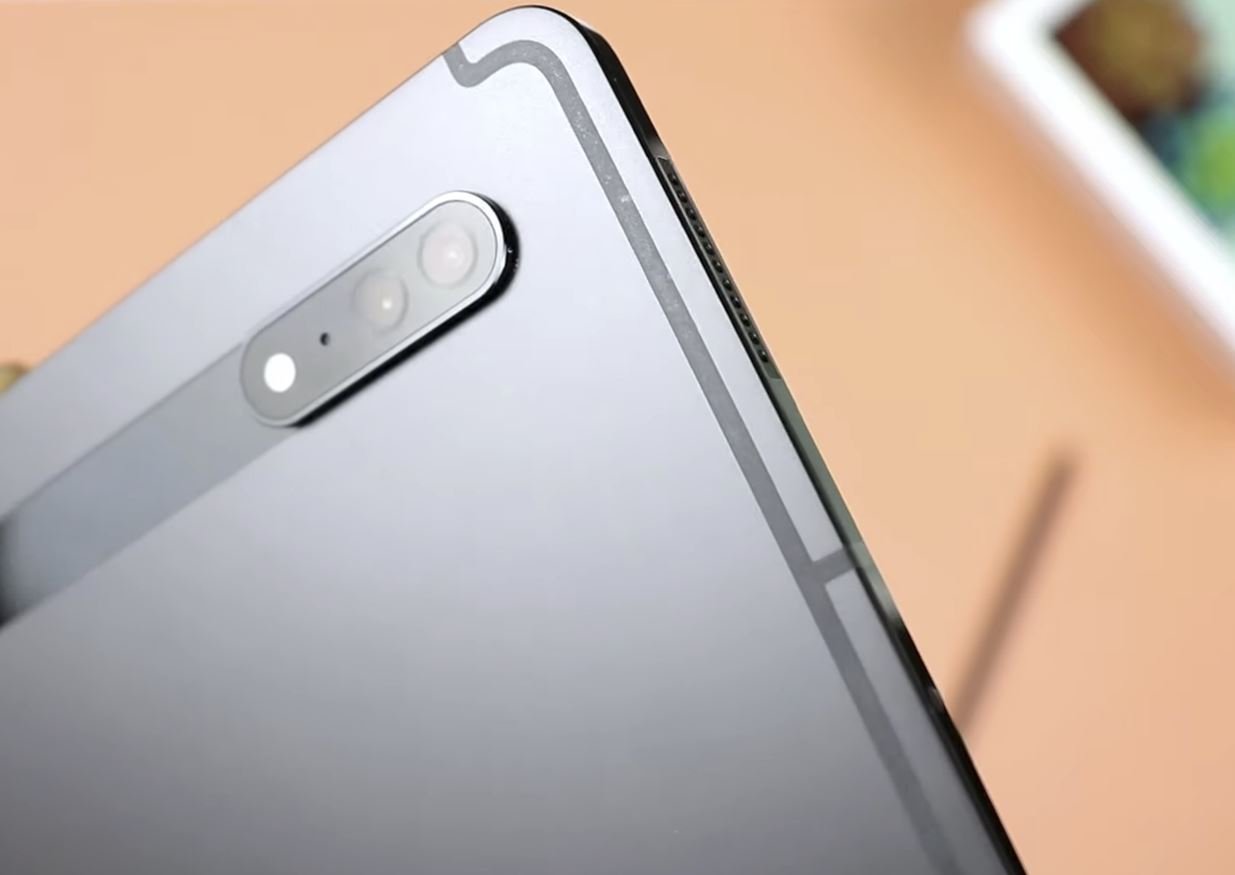 The two 12-megapixel sensors (wide-angle and ultra-wide-angle) are surprisingly well cared for on the front. You will be able to take a photo of your reel with complete peace of mind. Above all, the chances are that you will have the best image quality during a videoconference if your colleagues are using somewhat rotten webcams. For video, you can shoot up to 4K at 30 fps.

The Tab S8 Ultra 5G is built around a Sanpdragon 8 Gen 1 SoC accompanied by 12 GB of RAM and 256 GB of internal storage (expandable by micro SD card). The set provides more than enough processing power to run the most demanding applications.

The 12 GB of RAM allows for advanced multitasking. The most demanding games run smoothly, even when the level of detail displayed is very high.

The Tab S8 Ultra 5G does not have the processing power of an iPad Pro equipped with Apple’s Silicon M1 chip. It is getting closer, of course, but is not yet at the level.

This will be seen especially in the next two or three years when new generations of applications requiring even greater computing power will be available. At this time, the tablet from Samsung may be a bit struggling because it does not have the power reserve of an M1 chip.

Some may find this reasoning far-fetched; others will accuse us of pro-Apple bigotry. This is not the case: we believe that a product marketed at nearly 1500 USD must be efficient for more than two or three years.

Evaluating the battery life of a tablet such as the Tab S8 Ultra 5G is not easy. Depending on the use made of it and the energy saving parameters selected, it can vary from simple to triple… We finally opted for two scenarios of use, very different from each other.

In intensive use (multimedia, graphic creation with the stylus, game, internet, etc.), we were able to use the tablet for 1.5 days. Note that we used the 5G connection during this test for a few hours when we were on the move. That’s not bad at all, considering the on-board equipment.
In reasoned mode (no 5G, mainly office automation, viewing videos, listening to music), we easily exceed 2.5 days. We can further improve things by reducing the brightness of the screen and by activating the energy saving mechanisms present in the settings.

We note with sadness that Samsung no longer provides an electrical adapter with the tablet. Under cover of ecological gesture, it is obviously a question of saving money in order to maximize profits, which even Apple has not yet dared to do with the iPad (unlike the iPhone). In order to benefit from the “super fast” charge, it will be necessary to acquire an optional power supply which will recharge the battery in just under 90 minutes.

It is clear that the Tab S8 Ultra 5G has a very satisfactory battery life. In this respect, it does as well as Apple’s 12.9” iPad Pro.

Excellent screen, top performance, satisfactory battery life and well done software: Samsung’s high-end tablet is successful on all counts. We appreciate the possibility of extending its capacity using a micro SD card as well as the standard supply of the S-Pen stylus. This is precise, responsive and pleasant to use, Samsung having very wisely adapted the OneUI 4.1 overlay to its use.

We also appreciate the DeX mode which transforms the tablet into a real notebook provided you add the Book Cover Keyboard (or at least a Bluetooth keyboard and mouse).

Undoubtedly, Samsung achieves here a near-faultless for its first large format tablet. We can legitimately fall for it instead of an iPad Pro, certainly pleasant to use, but sometimes less attractive.