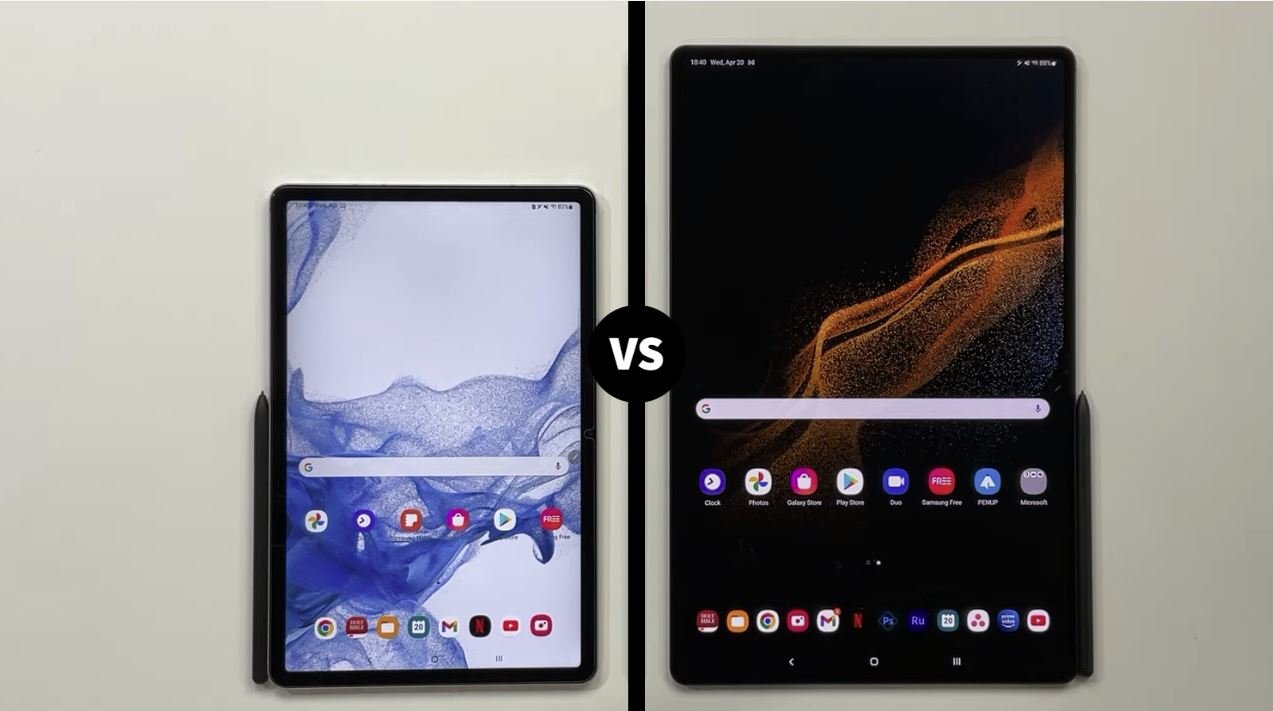 You’re wondering if you should go with the base model galaxy tab S8 or jump all the way up to the big boy S8 Ultra is it really that much better well after having used both of these for a while.

We’re comparing the two to try to find out obviously price is going to be a big factor here the base model starts at 700$ with 128 GB of storage here while the bigger sibling starts at 1299$ which has the same amount of storage and same 8 GB of ram and just to clarify these are both the base version.

We don’t think people realize how big the ultra is until you actually get it you can sort of tell with them sitting right next to each other. Once you get it in person it’s just like wow this is big on the regular S8 you get an 11 inch LCD display with 1600 x 2560 pixel which looks really good in person then you get a whopping 14.6 inch super amoled display on the S8 ultra with 1848 x 2960 resolution.

Now which one is gonna be easier for taking on a plane to use on the little trays on the back of the seats obviously the regular S8 in fact it’s a perfect fit at least on the planes. You’ll notice a notch there on the ultra version but it’s pretty small and you don’t really even notice after a while nice thing is you can watch youtube videos at 2160p or 4k resolution on both tablets.

You also get a fingerprint scanner on both but just in different locations right there on the power button for the regular S8 and then built right into the front of the screen on the Ultra both work really nice and i tend to lean towards the Ultra with it right on the screen it just feels like it’s easier to get to both are nice options to have.

When it comes to battery sizes between these two are going to be quite a bit different due to the huge size differences you get an 8000 mAh in the regular S8, 11200 mAh for S8 Ultra. Surprisingly though they lasted about the same amount of time during battery drain test at 7 hours each which is just about average compared to other tablets. Both are gonna last you pretty much the entire day with normal usage obviously depending on what type of work you do. If you’re trying to do video editing or playing games all day that’s gonna drain the battery quite a bit faster than just browsing online or just typing out documents.

Software wise you can experience pretty much the same on both of these they’re both on android 12 one ui 4.1 security patch march 1st 2022 you’re also going to get samsung decks on both of these as well which is a really nice feature to have. Even without samsung decks these two tablets are pretty easy to make them feel a little more like a laptop plenty of ways to multi-task for both and in our experience, working on either one it’s just a little bit easier on the Ultra version because the keyboard spaced out a little bit better and the screen is just really easy on the eyes. The larger Ultra version works a little bit better as a laptop replacement.

You also get 4 years software updates, 5 years security updates for both, that’s quite a bit better than in the past probably the best you’ll find in the Android world right now.

You also get the same S pen included with both tablets which are going to be some of the best out there great for drawing notes moving around the software even better than the apple pencil in most cases since you can actually use them just about anywhere.

Which has the better performance between these two, they are pretty much identical you get the same snapdragon 8 gen 1 processor for both and you’ll even have about the same geekbench scores for the base models. There are higher spec ultra models but then again you’re gonna be paying more moving around the software doing some multitasking or even playing some games are gonna feel very similar in these two just everything’s quite a bit bigger on the ultra you’ll also get a very similar gaming experience it’s just a lot easier to reach certain parts of the screen on the smaller S8 although gaming on a huge 14.6 inch screen is pretty fun, especially if you’re using a controller either way most people are gonna enjoy gaming on both of these tablets, it’s really just a matter of do you like to game on a bigger tablet with controllers or one that’s a little easier to handle using the touchscreen

If you’re looking for a tablet with great speakers where they’re nice and loud located on both sides of the tablets with Dolby atmos then you’re gonna like both of these tablets which one is louder between the two he slight edge to the Ultra.

Cameras on these two are actually pretty good for tablets, are they flagship phone quality not yet in our opinion but still probably some of the best you’re gonna find when it comes to tablets you’ve got dual 13 megapixel and 6 megapixel cameras on the back, dual 12 megapixel for the front facing on the Ultra a single 12 megapixel on the regular S8. You’re also going to get the new auto framing feature when using the front-facing camera for video on both tablets as well, so if you do a lot of zoom meetings or other video conference calls these two are going to be good options for that. You can also shoot up to 4k at 30 frames per second.

This was at least somewhat helpful or gave you some things to think about when trying to decide between these two you can’t really go wrong with either but considering the price difference and size difference even though there’s a lot of similarities between these two we feel like they’re aimed at two totally different audiences.

If you like the size of the Ultra but the price of the smaller regular S8 you may want to consider the S8 plus sort of the best of both worlds.