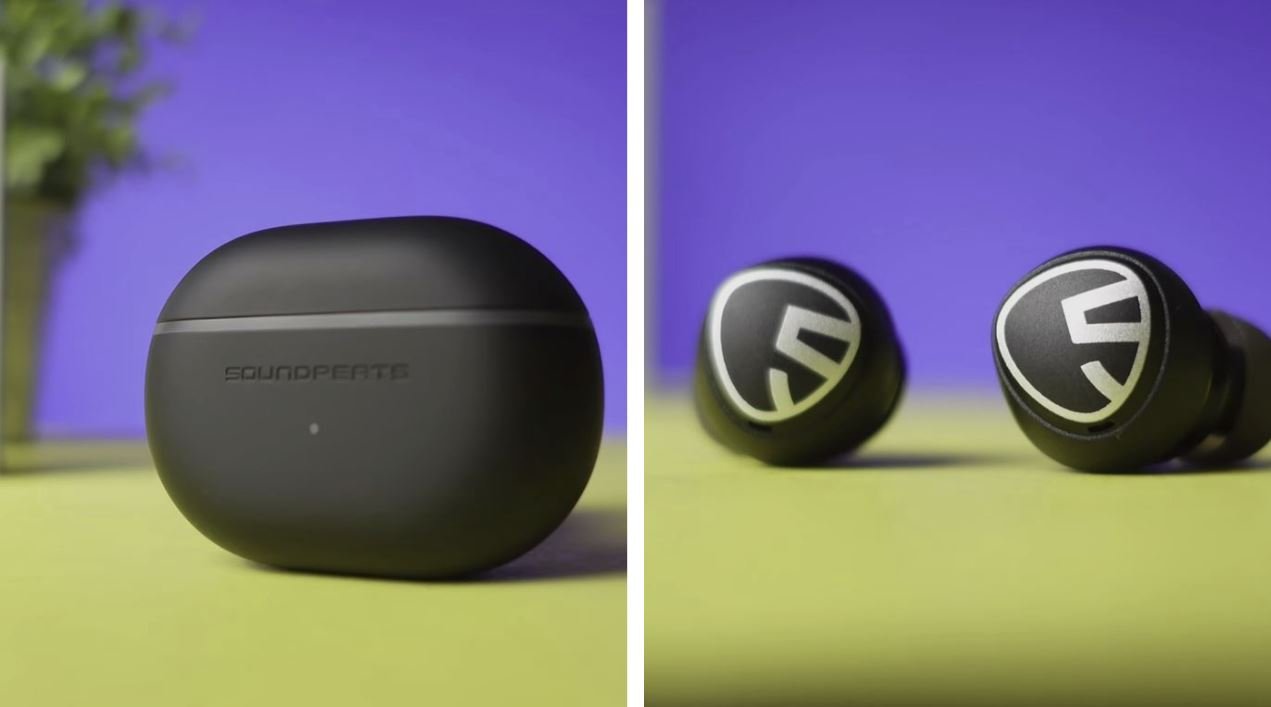 The Chinese mobile technology brand, SoundPEATS has introduced another model of wireless headphones called SoundPEATS Mini Pro. This device model is the latest in TWS headphones from the SoundPEATS brand.

If we talk about the cost, now you can buy a new model of SoundPEATS Mini Pro headphones at a rather tempting offer, namely $60. Whether it’s a lot or not, let’s find out from the main technical features of the device.

The SoundPEATS Mini Pro comes in simple but neat packaging. An interesting detail is that the brand is using much less single-use plastics, something that many other manufacturers would do well to follow. For example, pads of different sizes come in cardboard packaging. The instruction manual is put inside an envelope (other manufacturers use plastic bags for the same thing). 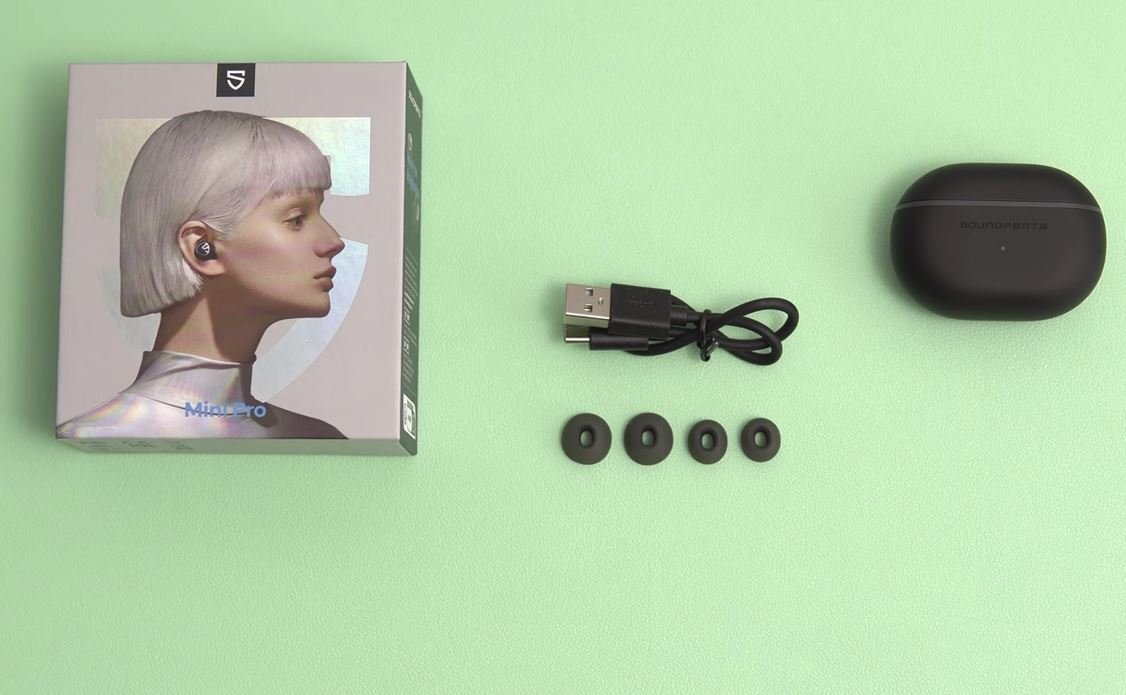 Of course, spare silicone tips – relatively flat and wide – and a USB-A to USB-C cable are included. The charging case has a USB-C port (no wireless charging) located on the back.

This case is an improvement over the original model, SoundPEATS Mini. An additional protective layer now supports the case material. It almost looks like rubber, and this adds a degree of scratch resistance and also has a very nice touch. It also has a pretty good build quality. It is compact but feels solid.

Another improvement is the lid hinge. Instead of closing weakly, as was the case with the Mini model, there is now a suitable resistance so that it does not close on its own. It also gives the feeling of being more robust. 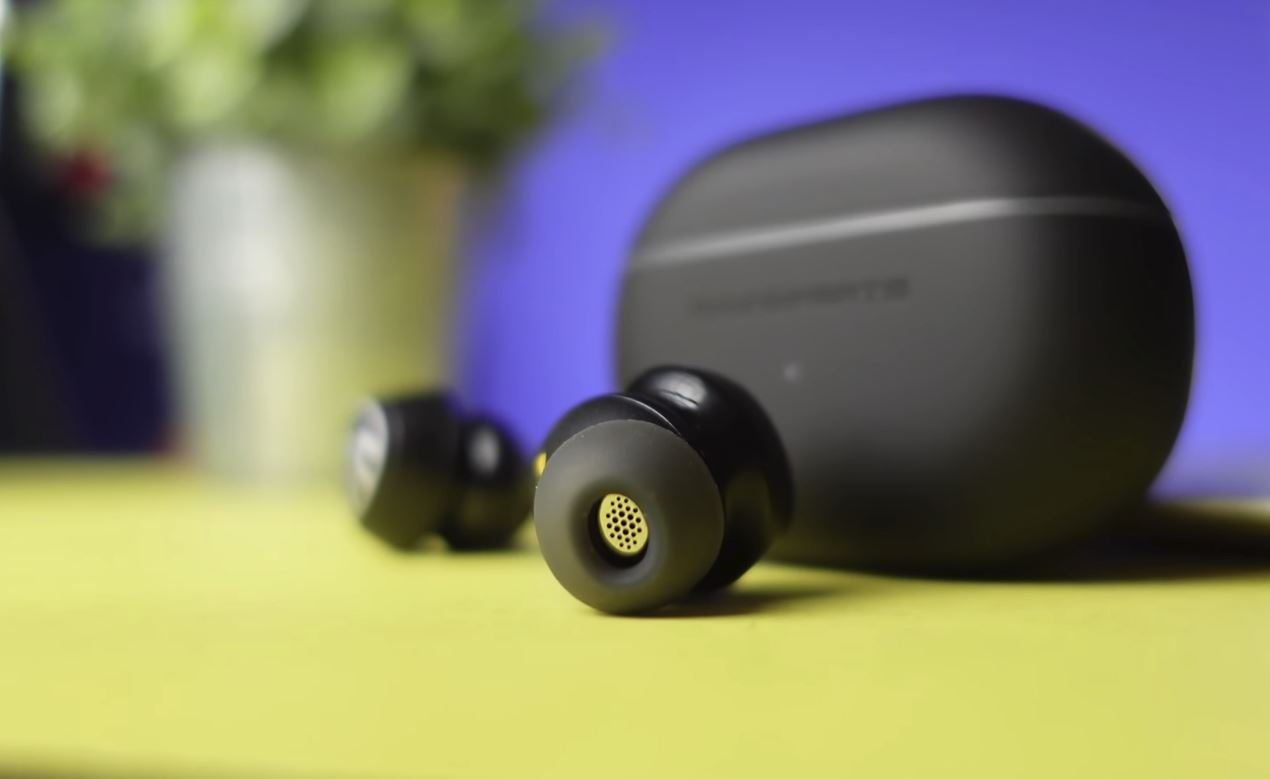 To live up to Mini Pro’s name, both the earphones and the case are small and light. The box has very compact dimensions of 59 x 43 x 26 mm and weighs only 37 grams, including the earphones. Also, it has rounded shapes; it is very comfortable to carry in a trouser or jacket pocket.

The earphones are also small and light (each earphone weighs 4.5 grams). Yes, they are small but not low profile, so they stick out slightly from the ear.

As for the shapes, the Mini Pro headphones have very interesting curves. They go into the ear, but not too much, so they don’t weigh you down. We must put them in the ear and then rotate them a bit to place them well. At first, it may seem strange, but once you get the hang of it, they are easy to place headphones, always well. 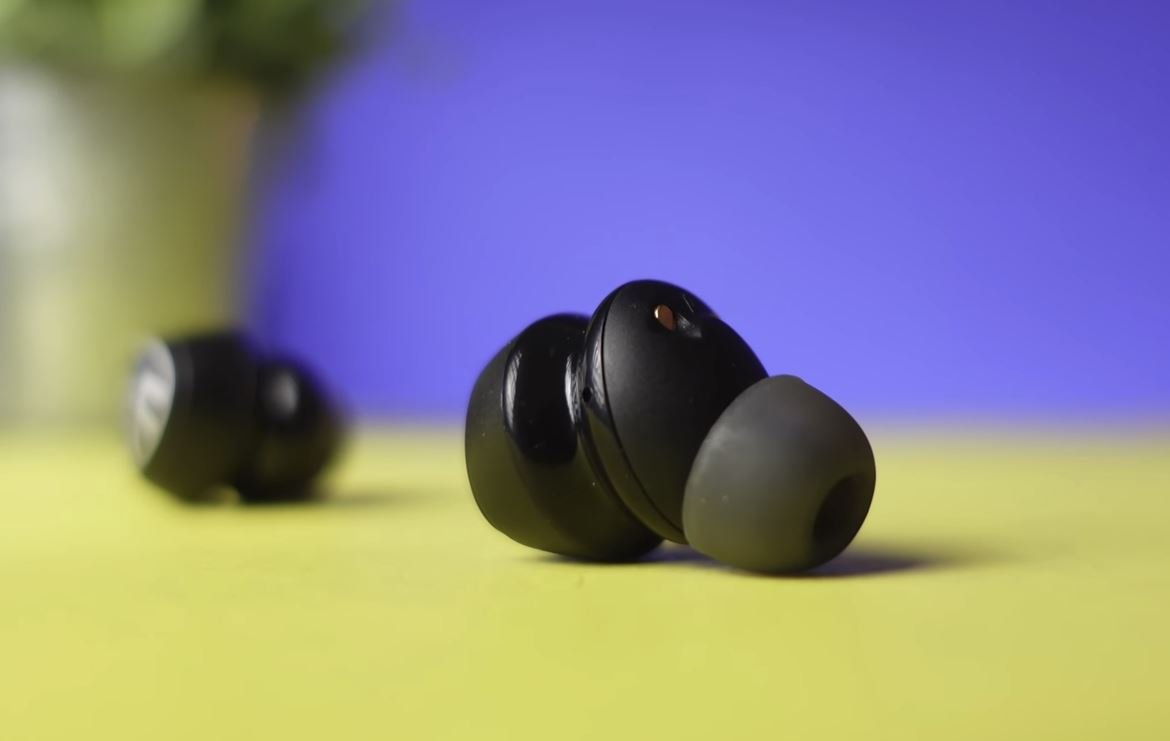 This design allows that, although the headphones are small, they are well fixed in position and do not move. Thanks to that, they are very comfortable to wear for hours, and we can also use them for sports and running. In addition, they have the IPX5 water resistance certificate, so they are resistant to sweat and rain.

Now let’s talk about the charging box, which also received good materials. The body of the case itself was made of matte soft-touch plastic, which was very pleasant to the touch.

As for the build quality, everything here was perfect. Yes, SoundPEATS is famous for its quality products. In addition, the manufacturer equipped SoundPEATS Mini Pro headphones with protection against sweat and splashes under the IPX5 standard. This is slightly better than the IPX4 standard found on more budget-friendly wireless earbuds. But that doesn’t mean you can swim or shower with the headphones on. 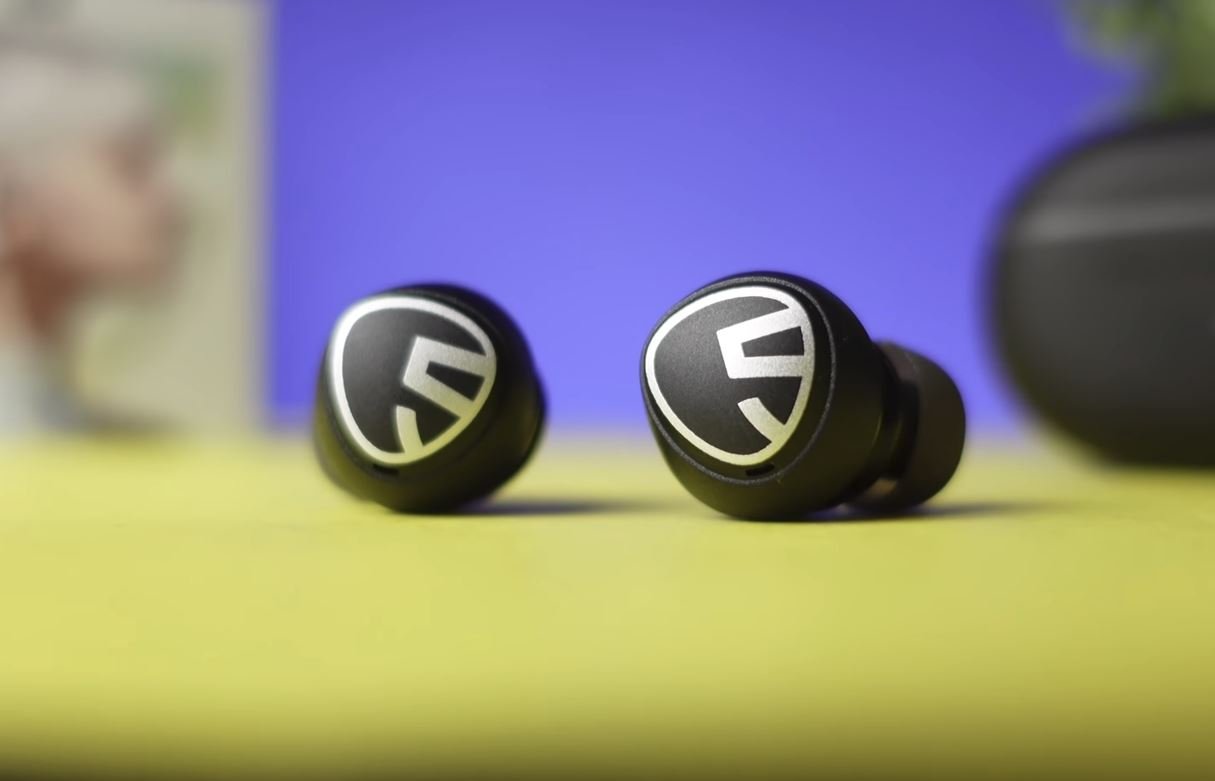 The part of the logo also serves as touch buttons with which we can control:

The controls work very well and are intuitive. The only bad thing is that we can’t go back to the previous song using the headphone controls.

In terms of wireless performance, the new SoundPEATS Mini Pro headphone has been equipped with the Qualcomm QCC3040 chip with the latest version of Bluetooth 5.2 connectivity. In addition, aptX Adaptive audio codecs were used here along with AAC and SBC.

It is stable, has a good range, and has no micro-cuts or disconnections. Also, the latency is quite small in normal mode. If we want further to reduce the delay between the image and the sound, we can activate the gaming mode so that the sound is completely synchronized with the image.

Each earphone mounts a dynamic driver with a 10mm bio-diaphragm.

Bass response is quite good. They are noticeable a bit high, but they maintain decent control. In addition, they have punch and somebody. Of course, they do not have an excellent definition or a very wide range, but for their price range, it is very good.

The media is of high quality. The melodies have good clarity, and the voices sound strong. Perhaps the tones are less reliable than more expensive headphones, but they sound quite good. 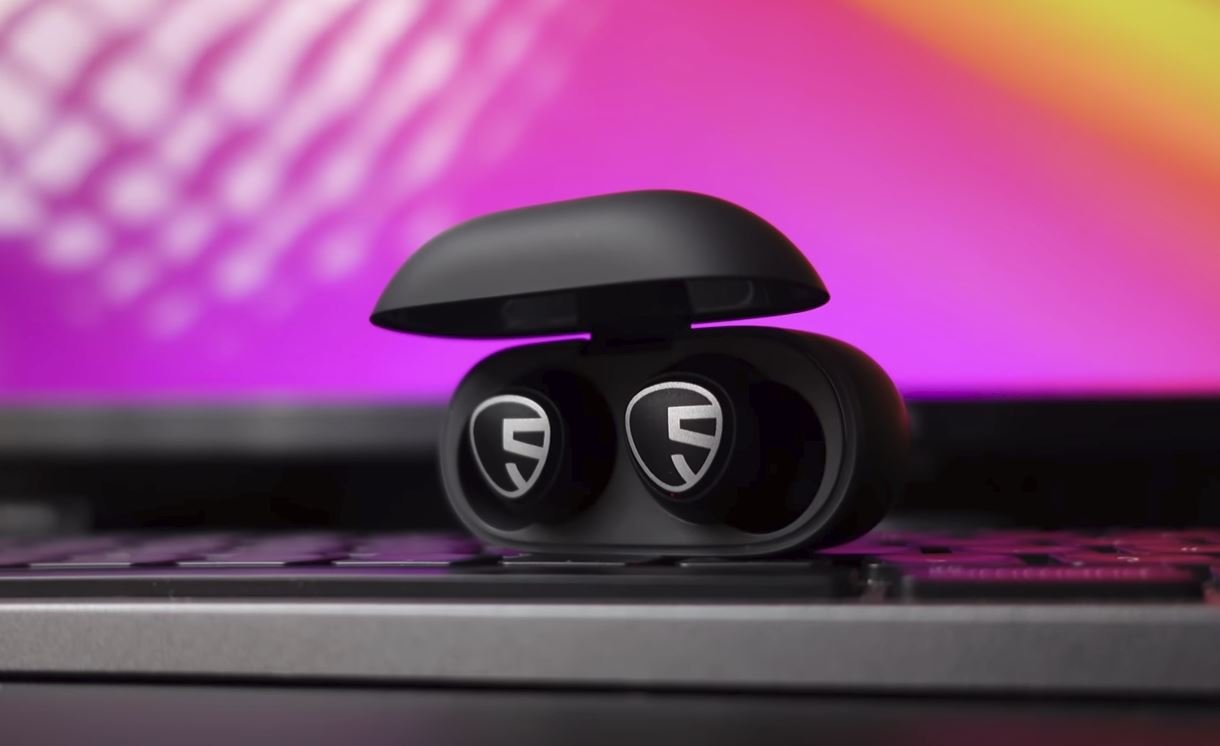 The treble has adequate sparkle; however, it sometimes sounds too harsh.

The headphones have a dynamic V-shaped sound that offers a fast and pleasant bass response. Fortunately, the mids are raised enough to prevent them from being buried between the bass and treble. The sound has decent separation; the headphones sound pretty good without wowing anyone; they don’t quite reach the level of the H-series, but the H-series doesn’t have ANC; they are more expensive.

Now let’s talk about the active noise cancelling feature. The ANC function did its job very well during use, but not perfectly, as the flagship versions of the headphones. Given its low cost, the work of active noise reduction was very good.

The ANC can greatly reduce low-frequency noise such as traffic, engine noise, air conditioning noise, etc. Like most ANC systems, the Achilles’ heel is in the mid and high frequencies, like vocals or keyboard noise. External noise has been isolated enough, thanks to the good sealing.

Of course, headphones with better ANC are more powerful, but for this price, the Mini Pro has a very good ANC. And in addition, the ANC does not affect the sound quality.

We also have a transparency mode, which is activated by pressing and holding the left earphone for 1.5 seconds. The sound that is heard through the headphones is has a good volume and clarity of sound. It’s quite natural, although perhaps the treble is a bit raised.

When making calls, the SoundPEATS Mini Pro uses the native cVc 8.0 algorithm of the Qualcomm chip to eliminate noise that is not our voice. The headphone achieves good performance indoors but is irregular in noisier environments such as outdoors. 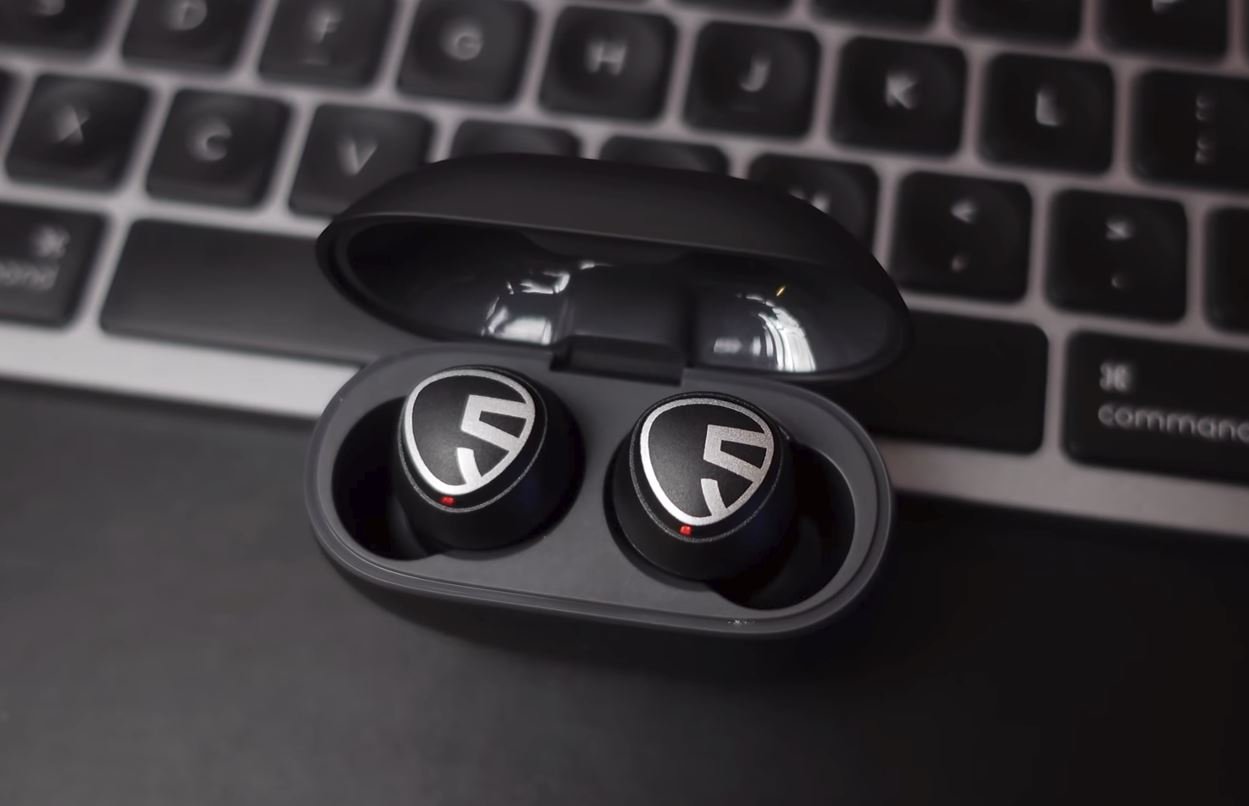 Indoors the voice is heard quite clearly and loudly. However, if we are in an office, the recipient could hear the noise of other nearby conversations at a lower volume. If the ambient sound increases, the call quality suffers quite a bit, especially outdoors, where the voice sometimes breaks with the loudest noises.

Therefore, they work well for making calls or video conferences in quiet places, but they can cause problems when using them in noisier places.

Each earphone has a built-in 45 mAh battery with which they are capable of playing music for 7 hours with ANC turned off.

The ANC is quite easy to activate and deactivate, so if you use the headphones in quiet environments, take advantage and use them without ANC to achieve greater battery life.

The box has a 300 mAh battery with which we can charge the headphones about 2 and a half times, obtaining a total autonomy of around 17 hours with ANC active. It‘s pretty good for such a compact headset.

The box has a led on the front that is used to see the battery level:

While we charge the box, the led will also flash: 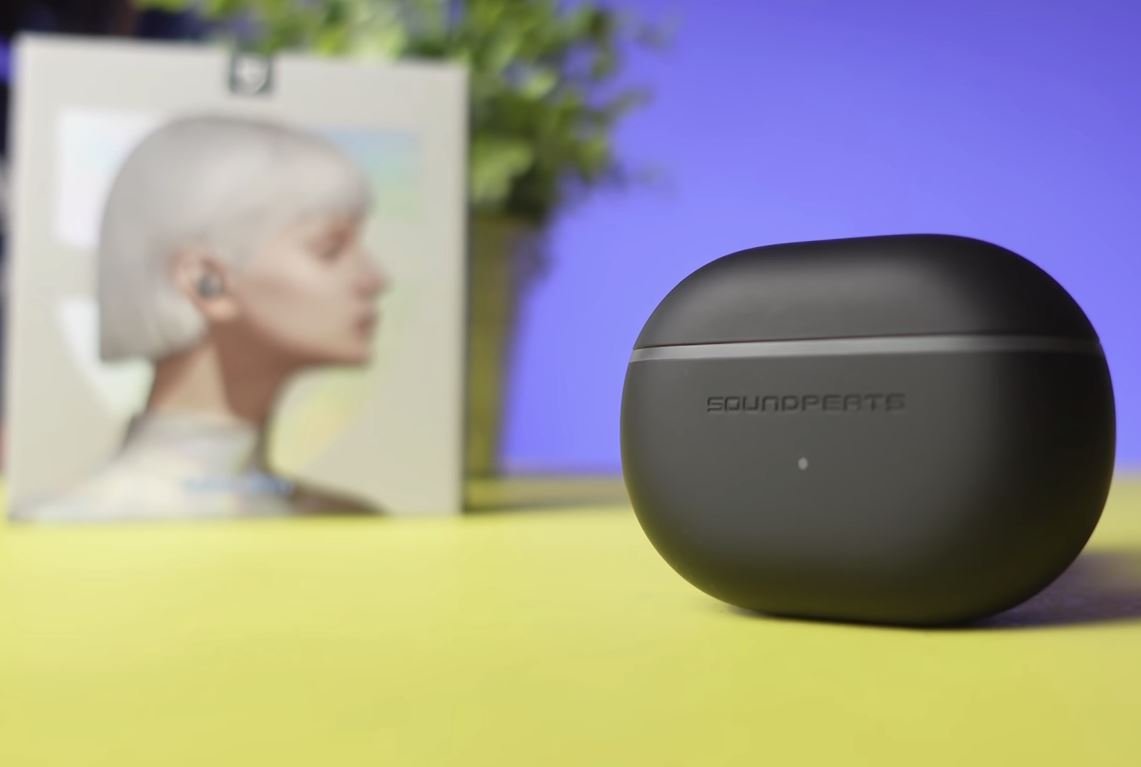 The SoundPEATS Mini Pro is simple but complete headphones. They’re not the best at anything, but they’re not bad at anything either. The connection is very stable, the sound is good, the ANC is very good for the price, and they are very small and light. Perfect for taking everywhere without being disturbed.

In addition, the device has a good list of interesting features. For example, Bluetooth 5.2, aptX Adaptiv, AAC and SBC audio codecs, and the QCC3040 chip. The device also has good protection against sweat and splashes under the IPX5 standard.

The truth is that SoundPEATS is one of the brands in terms of TWS headphones because they have reliable models with a fairly good quality-price ratio. These Mini Pro are yet another example. 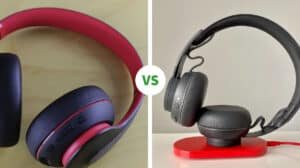 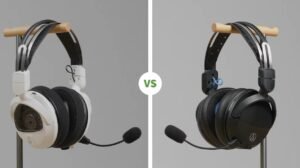 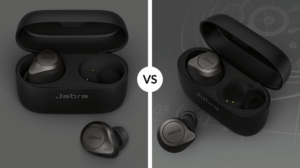 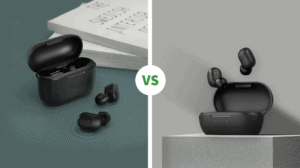 Haylou GT5 vs Haylou GT1 XR: Which TWS to Buy 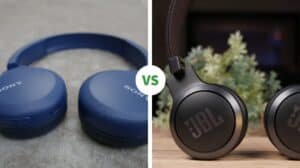