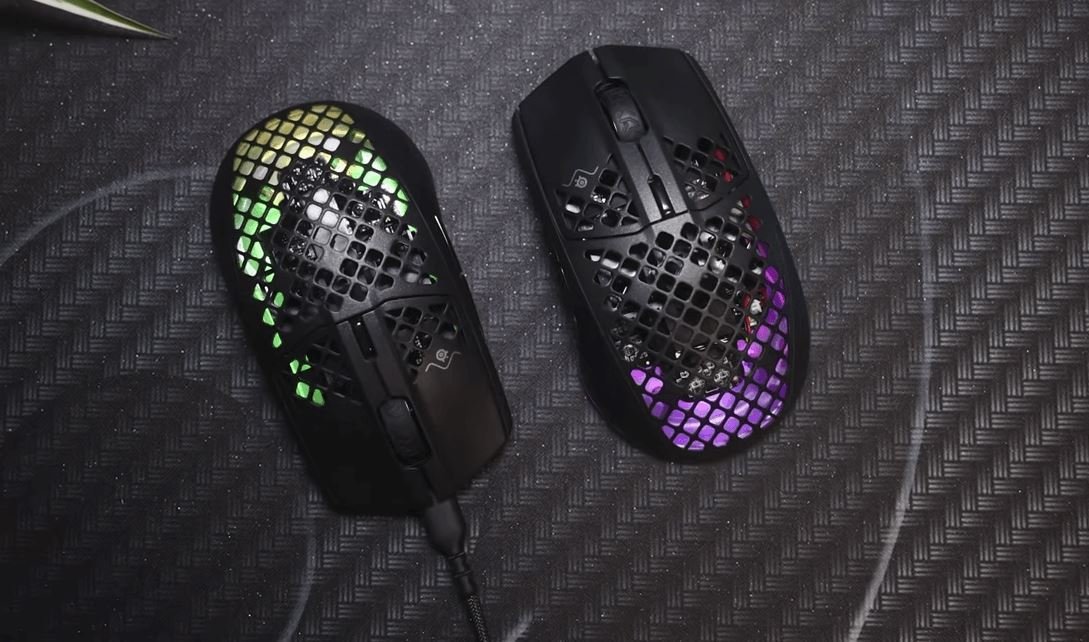 Steelseries Aerox 3 and Aerox 3 Wireless are two almost perfect mice that combine suitable sensors with the high build quality. However, they have a notable problem that can be crucial.

Steelseries Aerox 3 and Aerox 3 Wireless are identical in both exterior and use. We have a lot to write about Aerox 3 and the features that make them stand out in the market. However, both fall on the finish line due to a simple detail that we usually take for granted: the feet are too thin, which leads to the chassis rubbing in soft mouse pads if we are not very light with the hand. With better feet, Aerox 3 would have been a given recommendation in Mouse Guide. 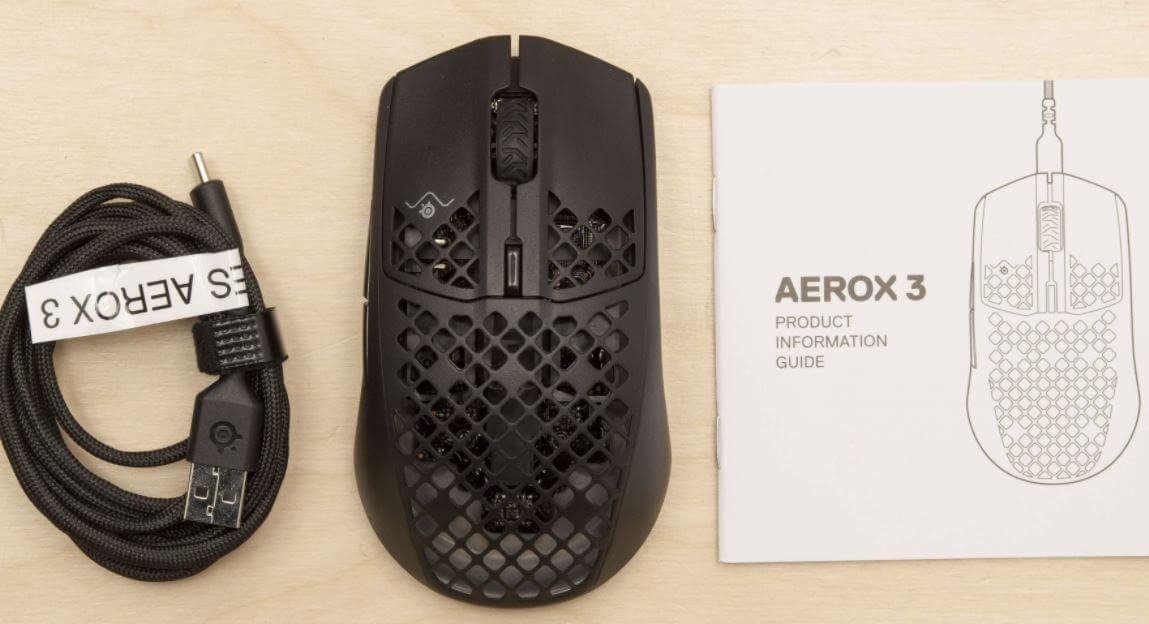 Both variants Aerox 3, are identical in appearance, down to millimetres in dimensions. For that reason, we will describe Aerox 3 and Aerox 3 Wireless together in the future, provided that there are no differences between them. 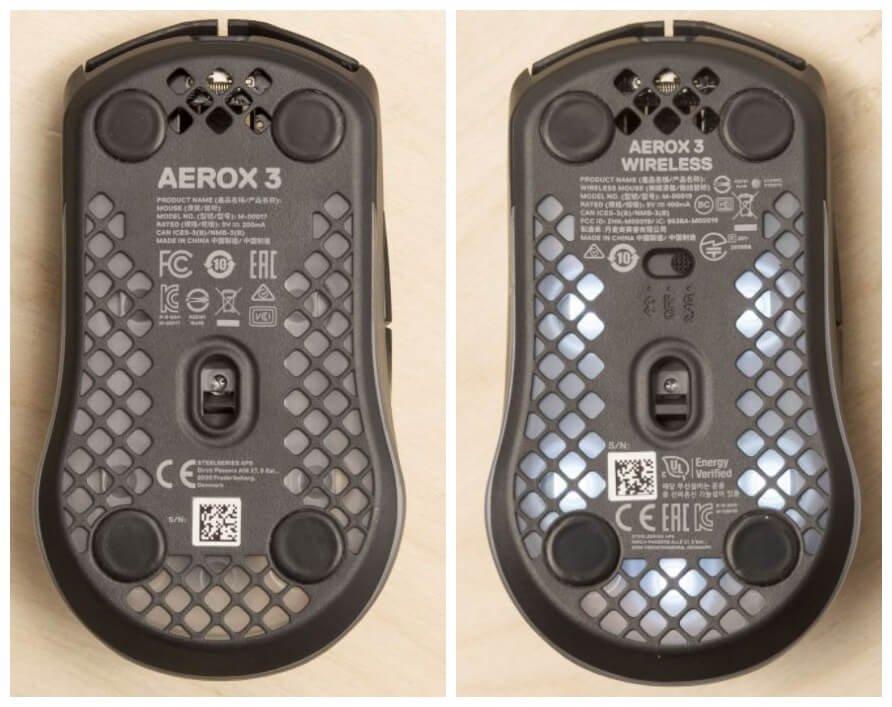 Aerox 3 has a stylish and symmetrical design with a tasteful accent in the logo on the left mouse button. In true super-light fashion, most of the top and bottom of the mouse is equipped with diamond-patterned holes to trim down the weight.

Aerox 3 is relatively neutral in its form and is suitable for more hands than, for example, the competitor Superlight from Logitech. There are no aggressive features in the case. It is neither high nor low, the click is not too hollow or too flat, and it is neither too long nor short. The sides are also almost straight except for the bottom curve. Steelseries markets the mouse for claw and fingertip grips, but our tests have no problems with palm grips. Thus, we see that the vast majority of hands can find a comfortable grip.

From a construction quality perspective, we have nothing to complain about. Aerox 3 is a robust mouse that is rattle-free and crack-free when we hug it. Despite a Bluetooth module in the rear half of the wireless variant, the weight is evenly distributed when we hold it in the middle with the index finger and thumb tips. 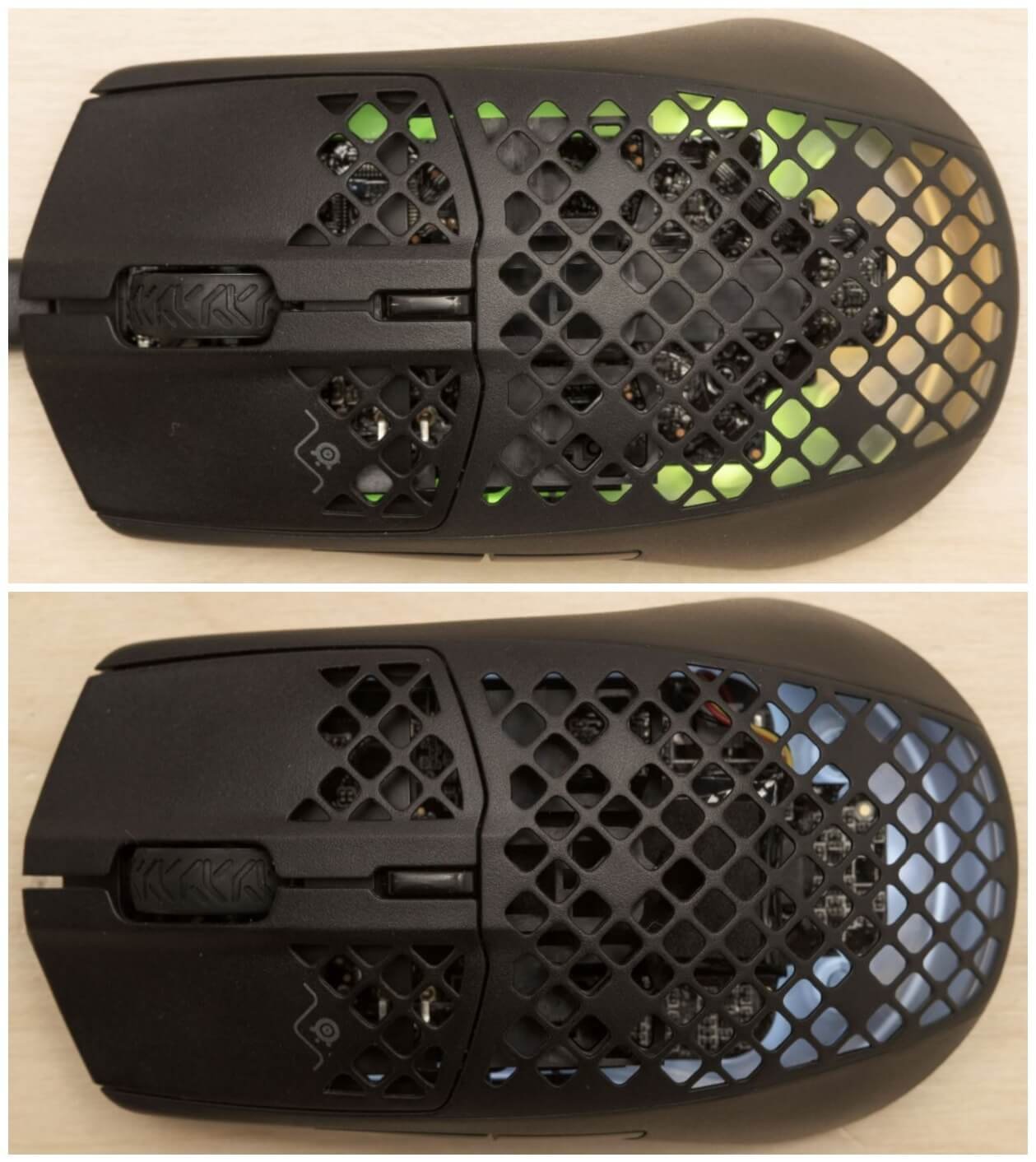 The mouse has an unusually grainy surface texture that is not comparable to other mice we have tested so far. Most matte mice usually have a fine-grained or smooth texture, but Aerox 3 has unusually coarse grains. This is not sandpaper or discomfort when used. We have no preference and do not mind the slightly coarser grains, and for those users who want a grippy mouse, Aerox 3 can be a good choice.

So far, it has been a top-class mouse, but unfortunately, it falls entirely on one detail. The feet are so thin and the surface so small that if we rest our hand on the mouse, it starts scratching on soft mousepads. The problem is challenging to fix on your own with aftermarket feet because the sensor has a compact lifting length. It leaves the option of sanding down the bottom of the mouse, something we should never even have to think about in the premium segment. The material is PTFE, but Steelseries does not claim that they are made of pure Teflon, unlike many competitors in the market.

If you are looking for a wireless mouse but went for the Logitech G Pro X Superlight due to the lack of LEDs, Aerox 3 may be a good option. In addition to a LED diffuser at the bottom, light also leaks through the chassis. We guess that the diffuser is made of the popular material polycarbonate and that the bottom has a cut-out to let the light through. In actual use, the light nicely reflects in our mouse pad via the light loops.

The cable is too stiff for our taste. It is still far better than a standard rubber hose cable, as in the Logitech Superlight. In both Superlights and Aerox 3 Wireless cases, the mice escape criticism as they are intended to be used wirelessly. Aerox 3 uses at least one USB-C port, making it easy to switch to an aftermarket cable, a feature that Superlight does not share.

According to the specifications, the battery life is up to 200 hours during constant use, emphasising “up to”. We have a hard time getting a charge to last 50 hours. Compared to the Logitech G Pro X Superlight, which we could use for several weeks without charging, we can make the Aerox 3 Wireless live for about four to five days with equivalent use. Fortunately, the mouse is fully charged in about 45 minutes.

It is always interesting and exciting to test mice that do not use the otherwise popular Omron switches. There is nothing wrong with Omron switches but a slight variation does not hurt. Aerox 3 uses TTC Golden Microswitches.

The switch’s weight feels noticeably heavier than the popular Chinese Omron D2FC-F switches, which abounds on today’s market. They are also more tactile, which emphasizes the importance but results in a crispier click. In terms of sound, they are much louder than Omron switches, while the sound is louder. In summary, the controls are of a high class and are an excellent alternative to Omron switches for the user who wants a more distinct tactile feel.

The scroll wheel sits low and has a tactile click, well-defined steps and is relatively loud. We prefer this type of scroll wheel compared to those higher up and have slightly spongier measures. In this case, we can compromise on the sound level.

The side buttons are also distinctly tactile, but they are narrow. The narrow design can make it difficult to feel the small space between the front and back side buttons. Despite this, we have not encountered any problems where we accidentally press the wrong side button. It is still good to know if you prefer side buttons with a larger and broader area.

We have always disliked having CPI control buttons on the top of the mouse. We do not see any scenarios where we often need to change CPI and therefore prefer to have these at the bottom of the mouse, where we never happen to access them by mistake. That said, the CPI slider is of unusually high quality. It is usually a forgotten detail, which results in a spongy click, but in Aerox 3, it is a highly tactile and qualitative click.

Today’s high-performance sensors are usually identical. Performance rarely differs in actual usage scenarios. What can distinguish high-performance sensors is often related to small posts on specification sheets. Sometimes there are manufacturer adaptations of market-leading sensors that are worth keeping an eye on. The impressive thing for us is if there are any deviations. In this segment, the focus is less on sensors. It would help if you instead chose mouse by mouse shape.

Aerox 3 uses the SteelSeries TrueMove Core sensor, while Aerox 3 has TrueMove Air. Interestingly, they do not share the sensor. In terms of specification sheets, TrueMove Air is the better sensor. In actual use, today’s sensors are so good that we do not notice any difference.
We have nothing to complain about other than that the lifting length is slightly shorter than, for example, PixArt sensors, which may explain why the feet are so thin. In our opinion, a quick lifting length is not negative, provided that the feet that the mouse is equipped with do not need to be upgraded.

We use MouseTester 1.5 to collect sensor data. We then review the results for any deviations. We find no traces of the common culprits in today’s mice, which inferior sensors have difficulty with: namely, Angle snapping, jitter and other compensations.

CPI – counts per inch
Manufacturers always have self-specified tolerances to adhere to. This means that the stated CPI does not always correspond to what the consumer expects. There is a built-in calibration for CPI in Mouse tests where we give the mouse a specific length and get back a number. The returned number should correspond to the set CPI on the mouse.

Jitter test
Jitter means that the motion tracking is inconsistent. We test it by moving the mouse diagonally and slowly to see if a step is formed instead of a soft line.

Tracking speed
Some mice may have difficulty tracking fast movements correctly. We move the mouse quickly over a surface and note the speed curve on the result. The result should not be zero or have unexpected consequences.

Angle snapping
By drawing fast circles with the mouse, we can see if it catches up or falls back and begins to compensate by drawing straight lines.

Lifting length
Players with low mouse sensitivity may need to lift and reposition the mouse during active play. Therefore, it is essential that the mouse has a short lifting length and stops reading movements almost immediately. We use actual user scenarios when we test lift size because it is difficult to get exact numbers.

We must always consider the human factor in this type of test. MouseTester can provide data to go on if we feel that something is not quite right. However, they are not absolute. What counts in the end is how the sensor performs and how it is experienced during actual use.

Aerox 3 uses the Steelseries Engine 3 software, which has expected features. These are macros, adjusted CPI and various LED functions. What shines with its absence is an adjustment of the lifting length. 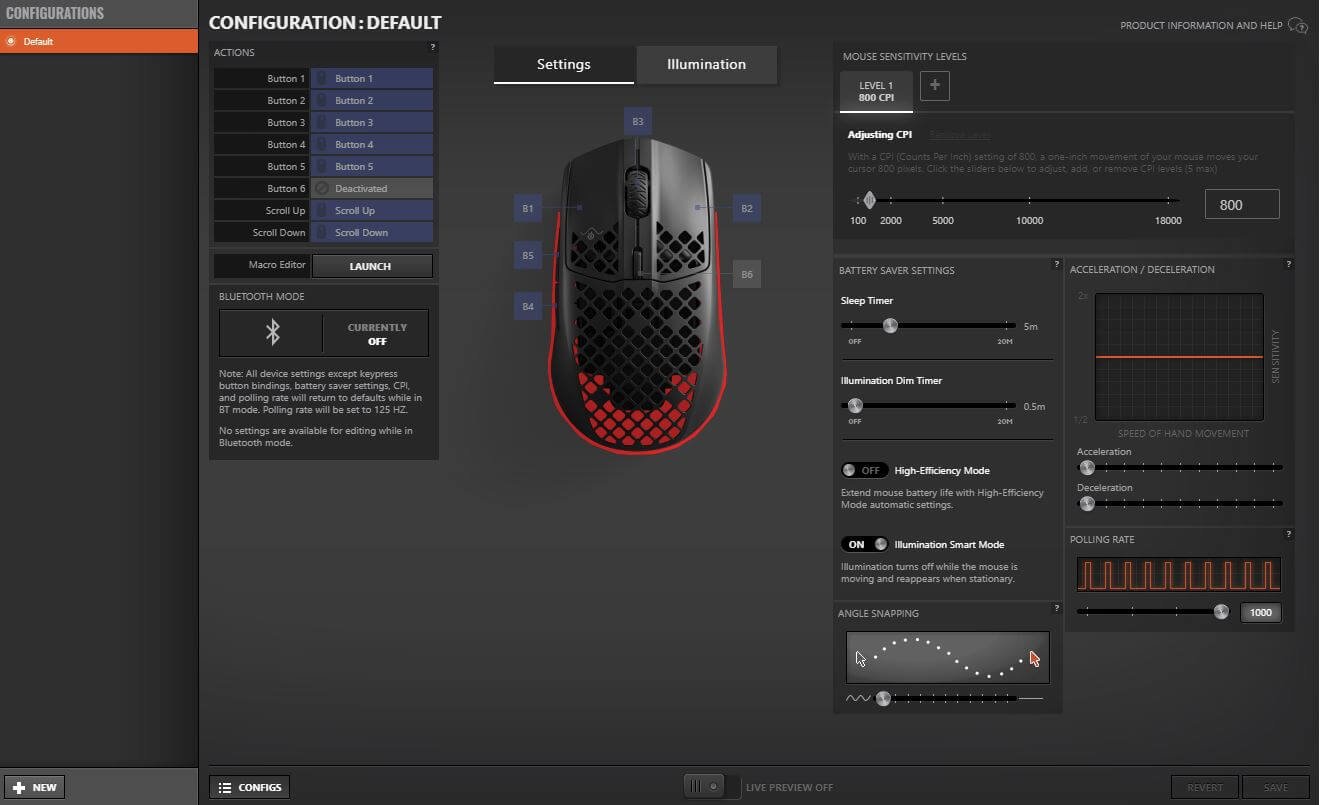 Two features that we recommend to stay away from are Angle snapping and acceleration settings. The Angle snapping setting locks the pointer according to the grid and follows them instead of letting us point freely and precisely. The acceleration settings create lag. During specific movements, the lead slows down or increases in speed without corresponding to our actual mouse movement.

Steelseries Engine 3 is relatively resource-efficient and does not need to run after the settings are configured.

The SteelSeries Aerox 3 and the Aerox 3 Wireless features a different sensor than the wireless version. The Wireless has a considerably greater CPI range and a shorter lift-off distance, which results in fewer unwanted movements while moving the mouse. Despite having an internal battery, it is only slightly heavier than the cable version. Its wireless connection and multi-device pairing capabilities make it more suitable for usage in the office and on the go. The Wired features less click latency and higher build quality.