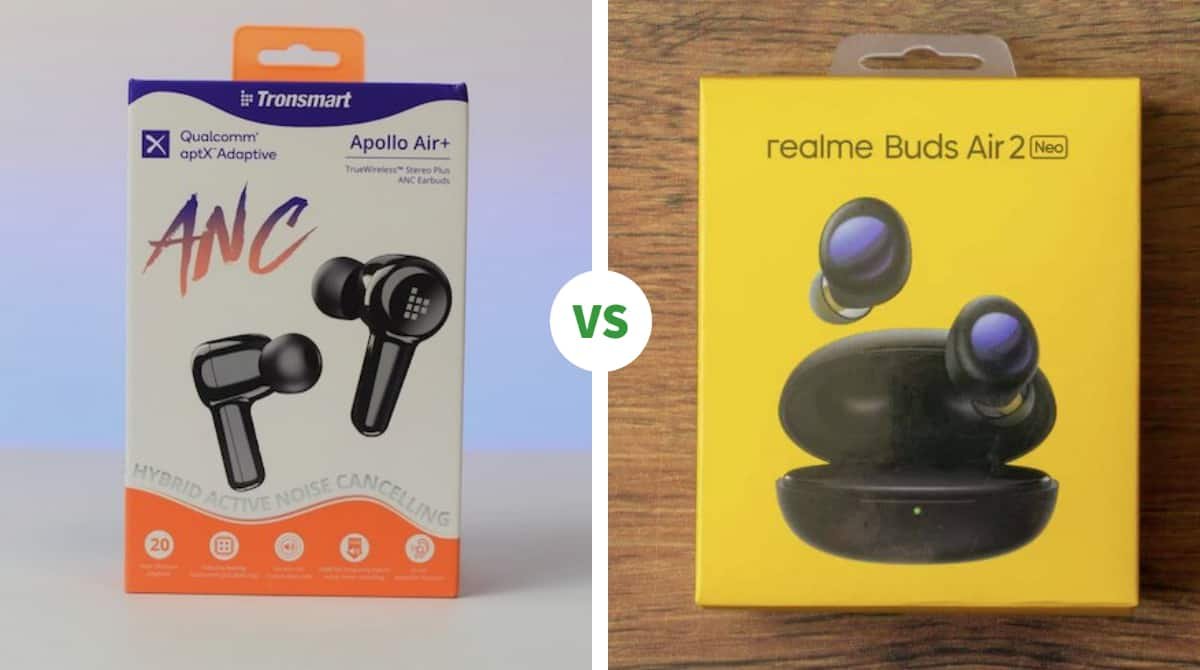 Tronsmart Apollo Air + model, which costs about 100 USD and according to the specification (e.g. support for the aptX Adaptive codec) also promises a lot. 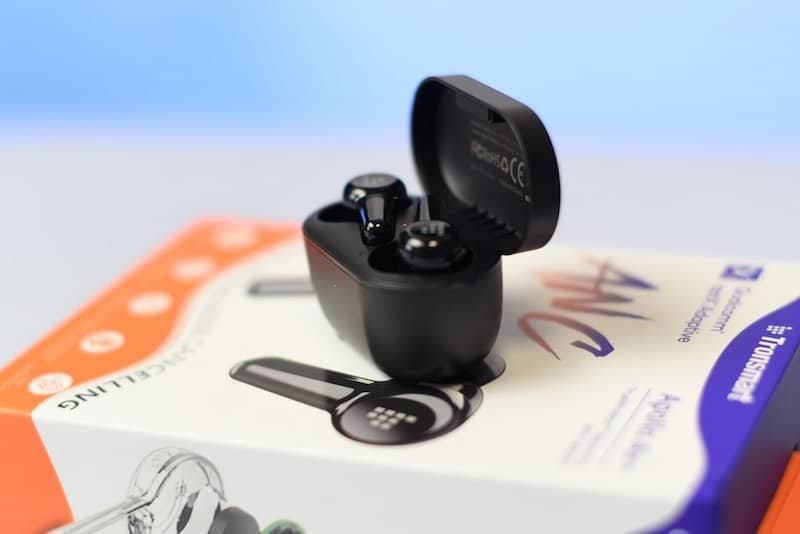 A good TWS headphones are a fact, as evidenced by the realme Buds Air 2 Neo model costing approx. 45 USD. 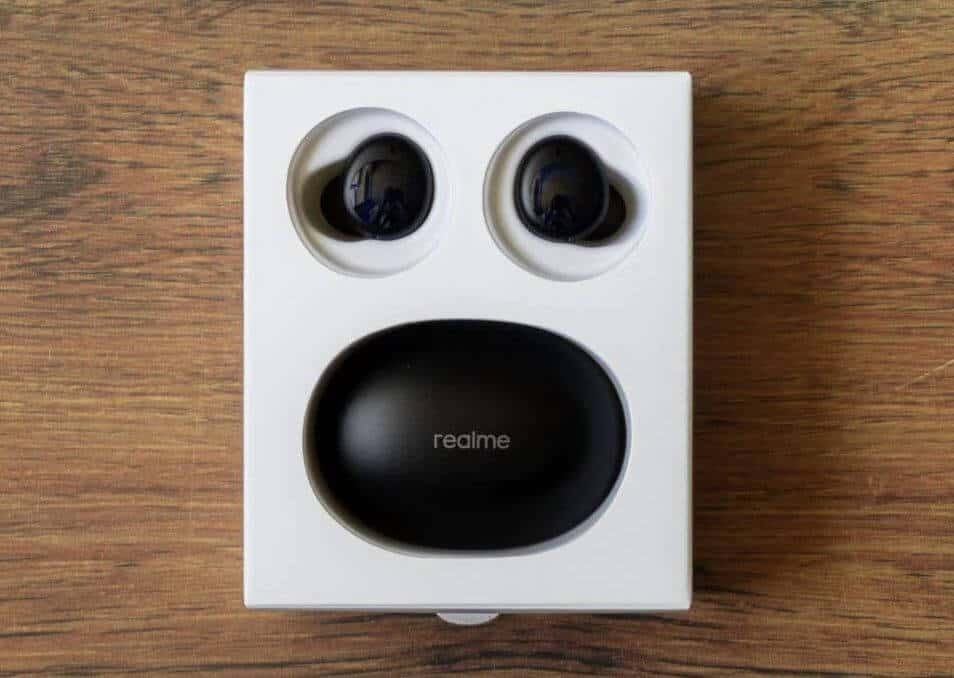 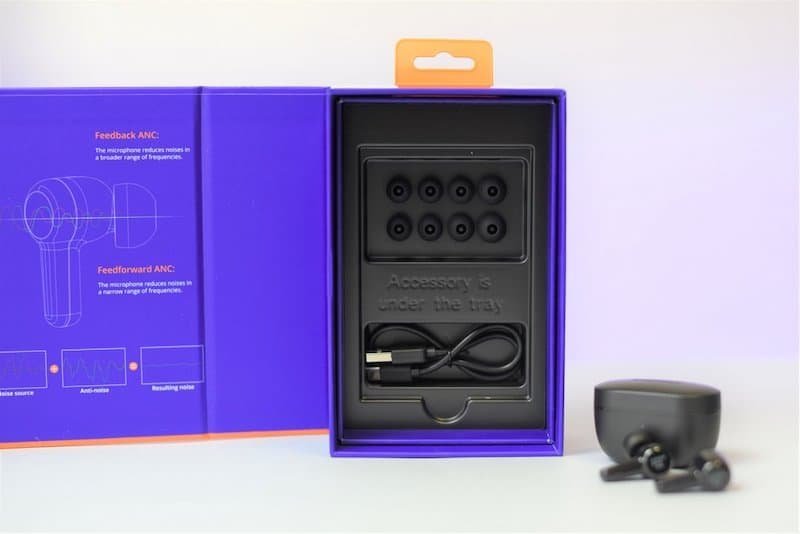 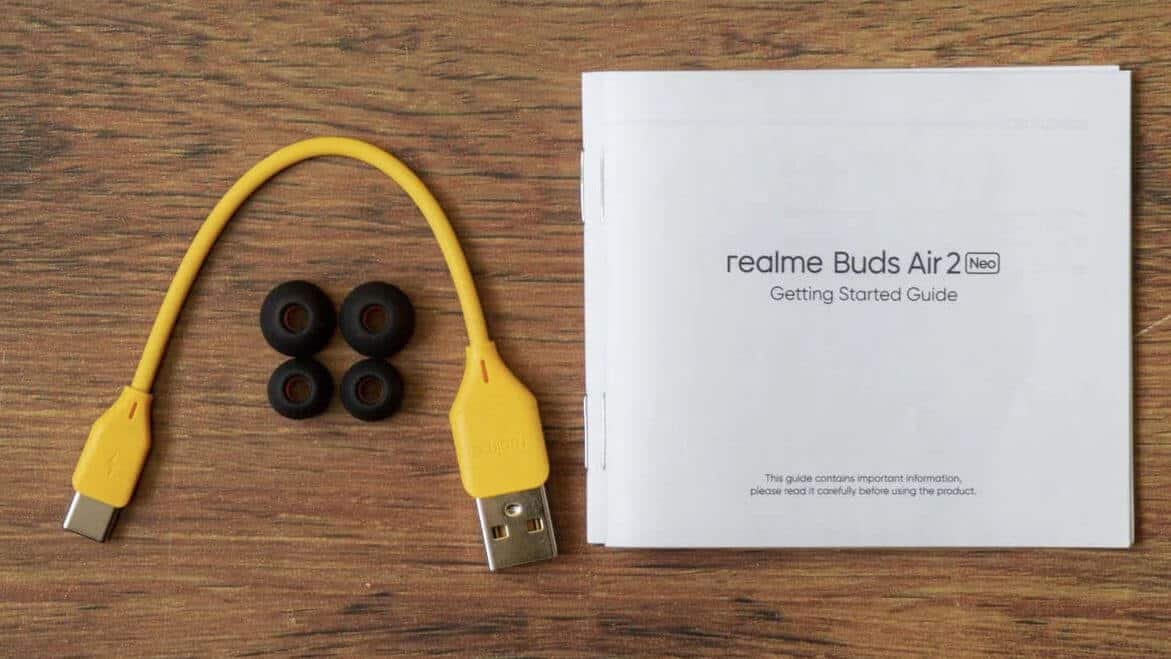 realme Buds Air 2 Neo Looking at the contents of the yellow package and its size, we immediately notice a minimalist approach. As a chronicler, the set includes, next to the charging case with headphones, only a short USB-C cable and 4 replaceable rubber bands made of silicone. 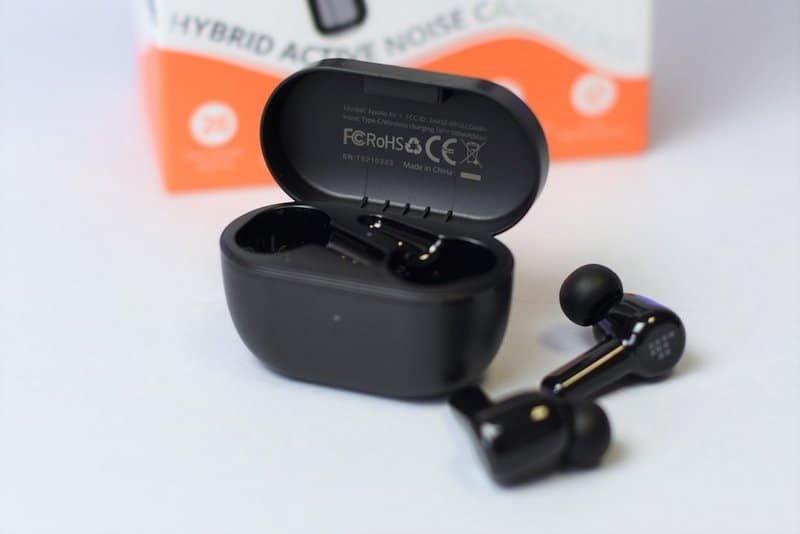 The case is made of a slightly matte material that does not seem to be the most expensive. The front housing only has a LED indicating the battery status, while on the back, there is a USB-C input and a pairing button. After opening the cover, we can see another diode and grooves – although their shape makes it easy to remove the headphones, they need a stronger magnet, which could “guide” us more when inserting.

If you are looking for a revolutionary design, you will not find it here because the model looks like hundreds of other similar constructions. Of course, this is not an objection but rather a reflection on unification. The only thing that catches the eye is a rather large touch panel with the manufacturer’s logo on it.

The channels fall out of the ear by themselves. In addition, there are hypersensitive sensors that detect even the slightest movement of the handset, stop the playback. This makes it impossible to recommend them to people who want to use them while running or cycling. 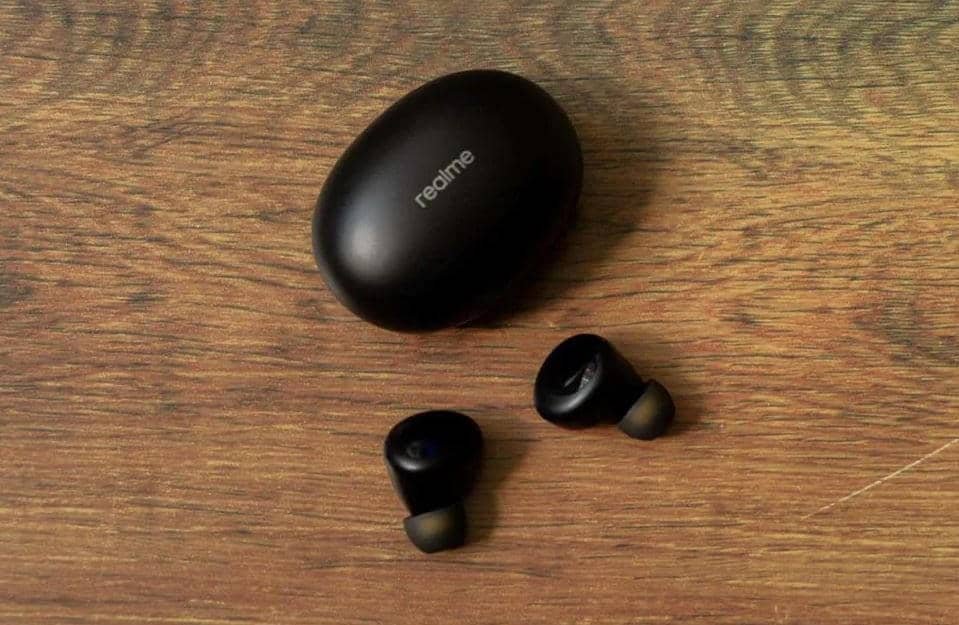 In terms of design, we get here a copy of the design known, for example, from the realme Buds Q2 model. The charging case is made of a cheap-looking matte material that collects scratches quite easily. There was also one diode. On the other hand, after opening the cover, we have access to the pairing button. Importantly, the shallow grooves allow for easy removal and insertion of both channels.

The housing of the bulky channels is partly made of the same material as the case. In turn, the touch panel is a mirror plate. Below, we can also find a diode. How are they worn? It turns out that they provide an excellent hold, so they are perfect for sports. The more so because they have the waterproofness provided by the IPX5 standard, so even if we are surprised by rain during the run, we should calmly return home with working equipment.

Surprisingly, the puffy shape of the headphones also provides quite high comfort – they do not pinch even in a situation when, for example, we fall over to the side during a nap. It is easy to forget about them since they are quite light – a single channel weighs only 4.5 g, which is a perfect result in this class. 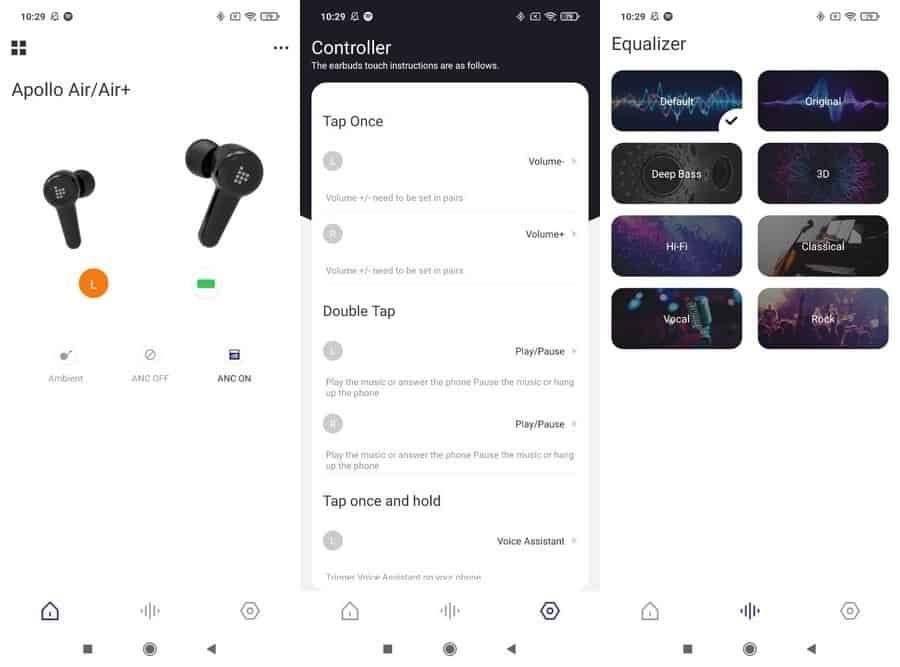 The Tronsmart application does not surprise you with its wide possibilities, but on the other hand, it has everything you can expect from such a solution. On the main screen, we have a headphone visualization with the battery status. It is a pity that the manufacturer has not decided to display the percentages. Below, we can choose from three more modes, i.e., Ambient, ANC OFF, and ANC ON.

On the next screen (there are 3 in total), we get an equalizer with 8 predefined modes. Some will certainly complain about the inability to set the performance characteristics manually. In turn, on the third screen, we get a set of gestures that we can use to operate the headphones. In this matter, the manufacturer allows you to assign different actions to as many as 5 different gestures. Among them, we find in turn: one tap, double-tap, tapping and holding, holding and three times tapping.

It is primarily about the first screen, from which you should choose our model from the entire portfolio. Oddly enough, Tronsmart Apollo Air+ is in the penultimate place. Could it be another “genius” idea for creative advertising of your products. 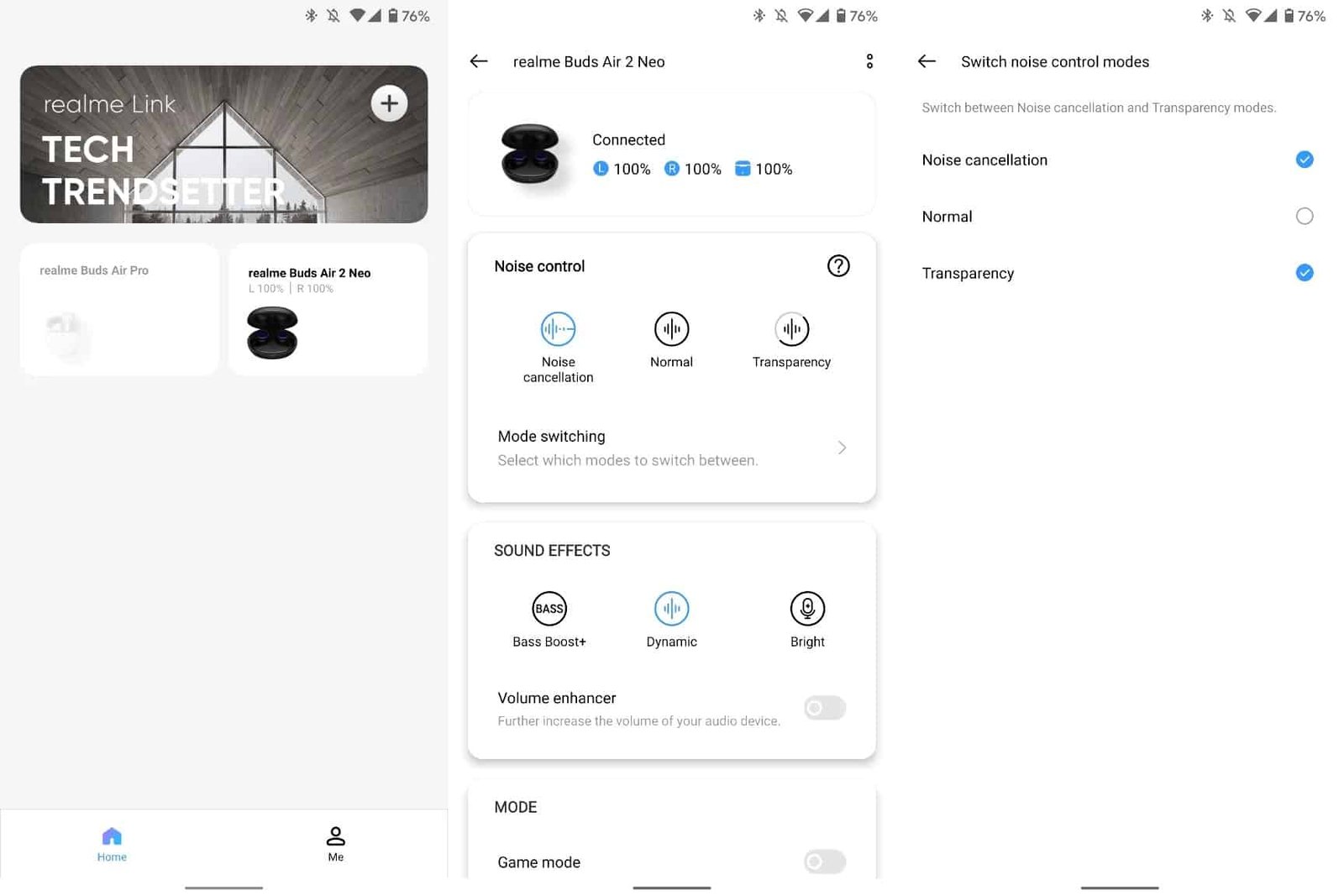 For smartphone users, the manufacturer has released the realme Link application, thanks to which we can also connect other realme devices, including, e.g., a smartwatch. After pairing, which is quite intuitive, our device should appear on the list of available items. The main screen is divided into several functional sections. The first is the battery with a percentage charge for the channels and the case. Below we have noise control, i.e., ANC functions with three modes (Noise Cancellation, Normal, and Permeability).

The manufacturer has provided an equalizer with three predefined sound effect modes and an additional volume boost. Below is also the game mode and options related to receiving calls. The last section is Button Settings, where you will find the possibility of assigning various functions (including play/pause, next/previous song, ANC, or Voice assistant) to 3 gestures such as double tap, triple tap and hold.

The interface is straightforward to read, and besides, placing all the key functions on one screen means that it can use the application even on the go.

According to the manufacturer’s declarations, the entire set, i.e., headphones with a case, can provide 20 hours of work, of which the headphones alone can last 5 hours. Of course, with the ANC function on and the volume set above 50%. This result will be much worse.

In turn, the case allows you to replenish the energy level for 3 cycles without connecting to the power supply. And if the need arises, we will charge the set from 0 to 100% in about 2.5 hours. It is also worth adding that the set also supports wireless charging.

Battery life is decent. Each channel has a cell (with a capacity of 40 mAh) providing approx. 4.5 hours of playback on a single charge with ANC on. We also get fast charging, thanks to which in 10 minutes. We will get another 2 hours of playback.

In turn, the case has a 400 mAh battery, which allows you to charge the fleas less than 3 times without connecting to the power supply. It is worth noting that replenishing the energy of the entire set from 0 to 100 percent. Lasts approx. 2 hours.

Tronsmart boasts that the Apollo model, next to the previously mentioned. Qualcomm QCC3046 system has a set consisting of 6 microphones (3 pieces per channel), thanks to which it can reduce noise up to 35 dB.

In this regard, the manufacturer promises an efficiency of 25 dB due to a set consisting of a double microphone and a realme R2 chip. Effect? Uniform noise (such as when a washing machine, dishwasher, or dryer is switched on) does not disappear completely but is definitely muffled.

The Tronsmart Apollo Air+ looked very decent in many respects. The set consisting of a fairly wide selection of codecs (aptX Adaptive at the fore) and 10 mm drivers can generate very pleasant frequencies.

There is also little to fault with the ANC function or the sensitivity of the touch panel (which also offers volume control). On the other hand, falling out of the earphones and unpleasant humming during loud listening discourage me from spending about 100 USD.

The realme product is proof that you can get ANC-enabled Bluetooth headphones at a very reasonable price that offer good sound, ergonomics, and decent battery life. The advantages of the intuitive application and a stable connection offered by Bluetooth 5.2 are certainly also a plus.

Slight compromises can indeed be seen in the material from which the charging case and both channels are made.