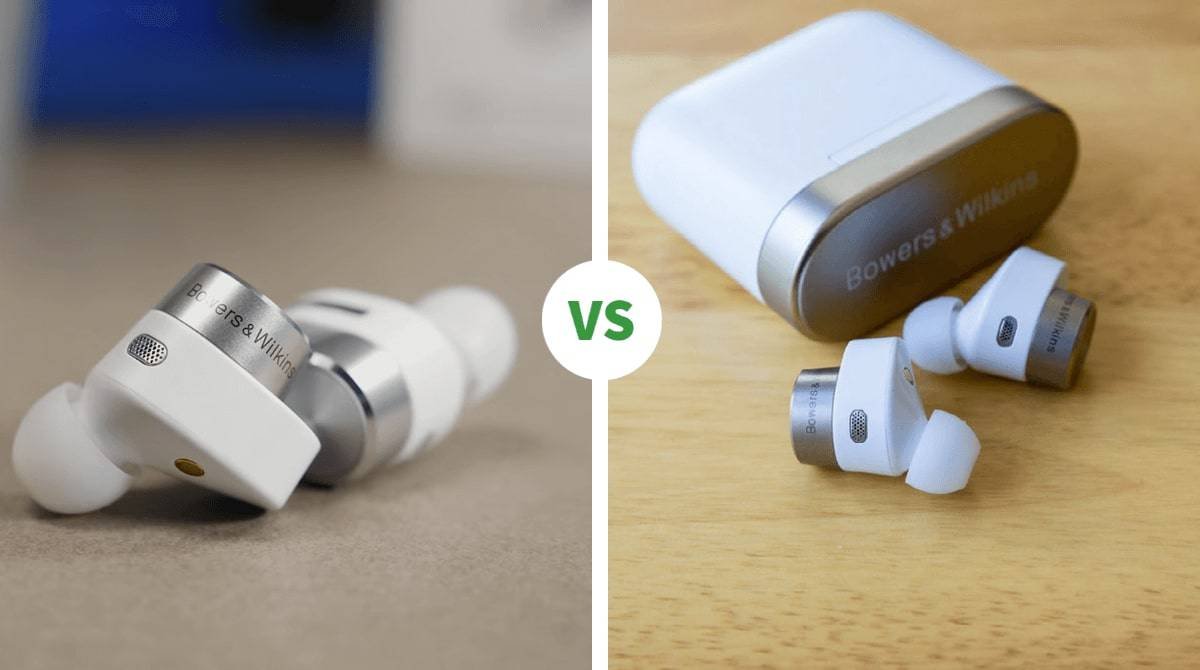 Well-known for its high-end speakers, Bowers & Wilkins decided to skip the classic flaws to target the premium category. What do PI5 and PI7 show for nearly $249 and $399 lets checkout and compare. 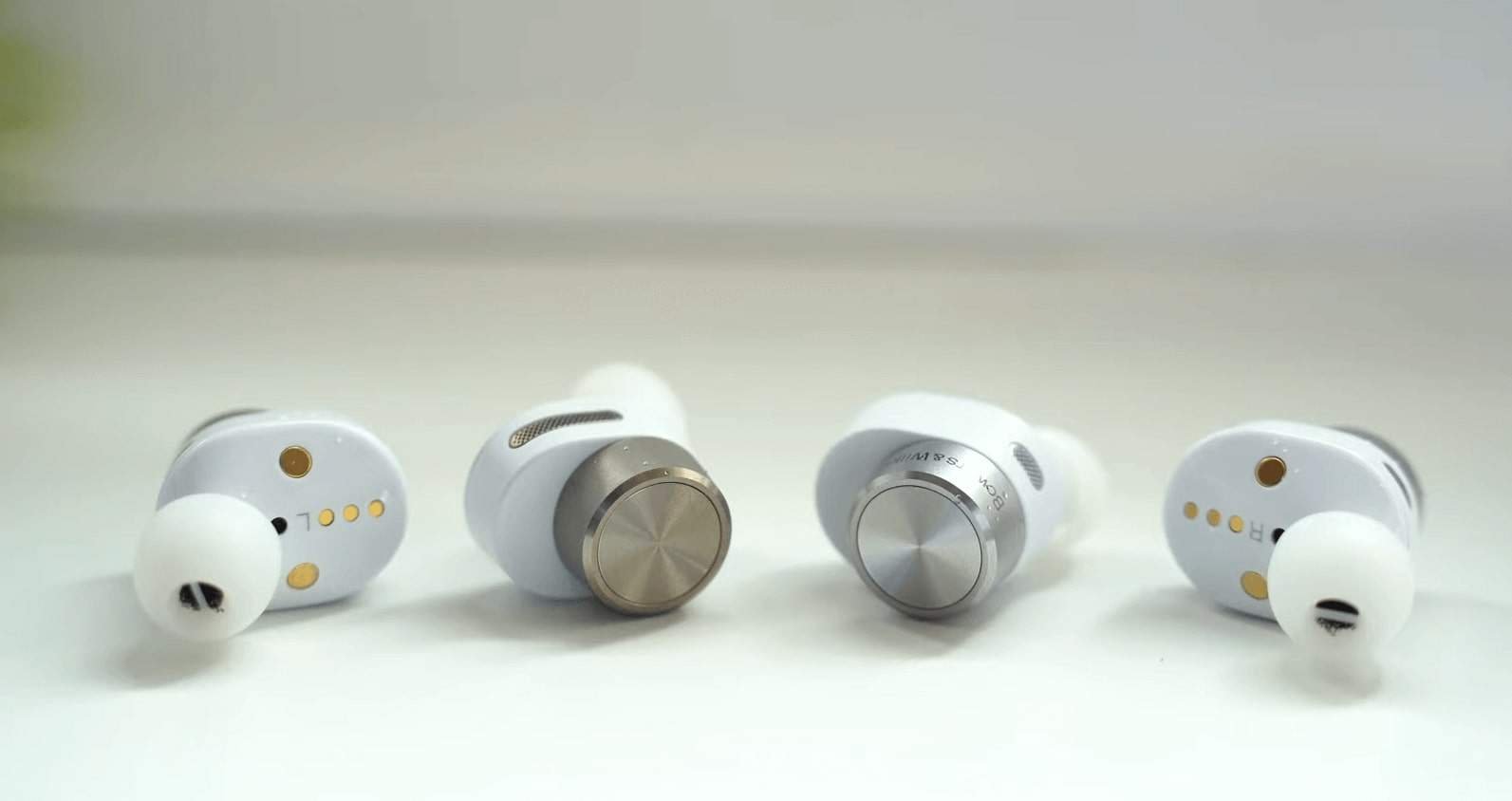 The PI5 and PI7 earphones glance very similarly. They differ only in a few details, but the few modifications added such value to the larger model, which, according to the manufacturer, justified a price of 150 USD higher. Thus, the PI5 will compete with the TWS earphones we have tried so far (e.g., Sennheiser MOMENTUM True Wireless 2 ), while the PI7 will go even further. This is the first TWS earphone more expensive than 300$ , which we have met so far, so we can rightly expect it to show something plus compared to its cheaper competitors.

Both earphones came in high-quality, Apple-style packaging. The use of materials is pleasant. The construction and design of the partly aluminum and mostly plastic housing earphones proved to be fair. Still, the plastic housing charging case seemed a bit uncertain, considering that other similarly priced TWS earphones (or even previous models of B&W ) already have a more elegant look (e.g., aluminum, fabric, chrome, etc.) storage facilities.

The overall picture, then, does not suggest the prestige that seen with other B&W earphones. In return, the discretion of the charging case does not shout to others that it contains an expensive device, which can be an advantage in an urban environment. Behind the flat strip on the charger case, different colors provide information on how to start a Bluetooth search or the charge level of the main battery. As shown in the accompanying photos, the B & W PI5 and PI7 comes in black or metal/gold decoration on white.

The PI7 is bidding on its smaller brother in that it employs not one but two speakers per side. The 9.2mm dynamic has been supplemented with a BA (balanced armature) unit, allowing it to reproduce high frequencies in higher resolution and a better sense of space.

Interestingly, the weight of the two earphones is the same even though the more expensive ones have two speakers. This also suggests how minimal and light the BA unit, a professional in displaying high frequencies, is. 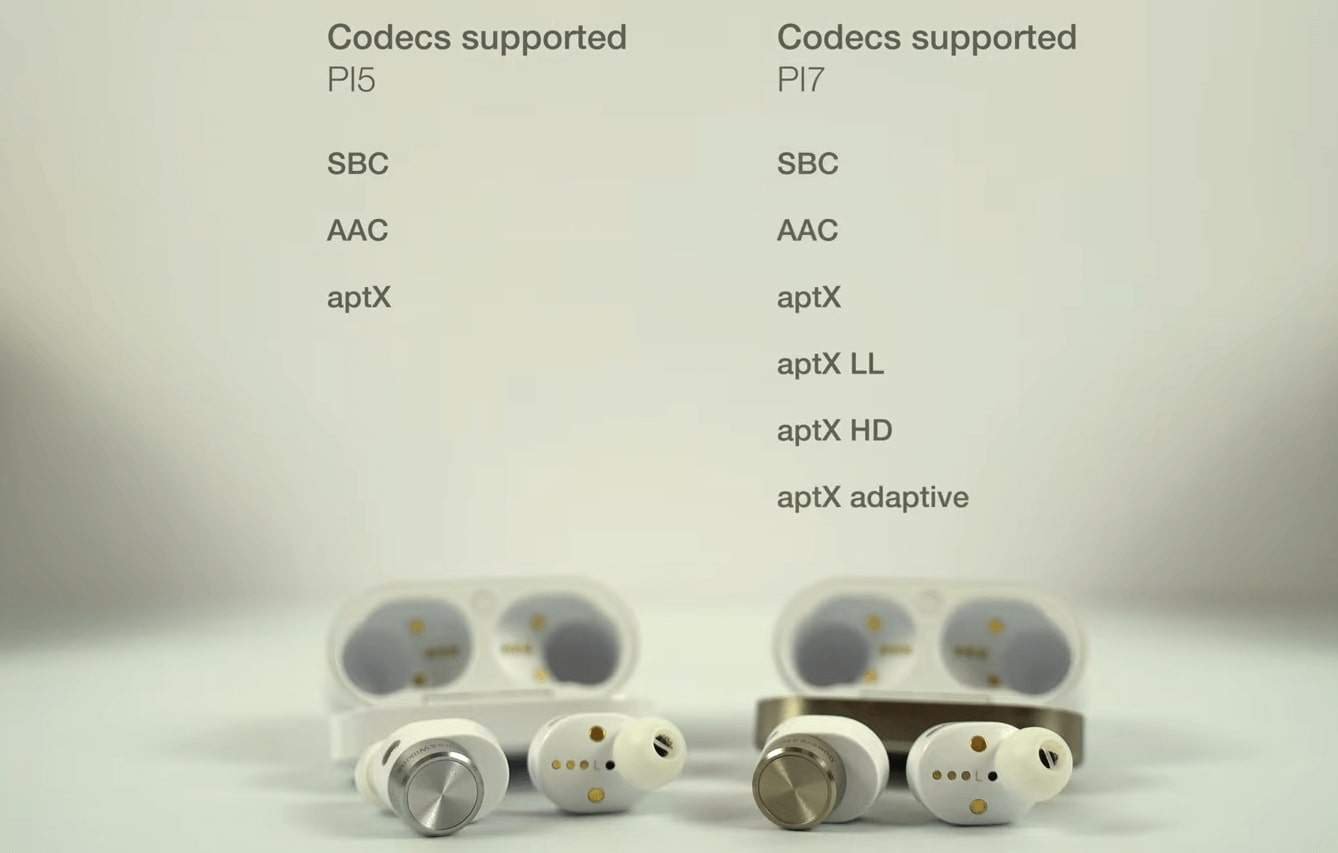 The earphones are made up of partly oval and partly cylindrical elements. At first, we were skeptical about comfort, but the engineers managed to use a shape that snuggled quite nicely into our ears while also providing better-than-expected stability. We wouldn’t have taken B&W’s ears with us for running and other extreme sports, but both were great for walking, office work, casual activities. Plus, they looked distinctly small on the outside and didn’t hang out too sideways.

Noise reduction has been effective and powerful in reducing car noise in the outside world for both earphones. However, in the long run (after 30-40 minutes), it was a little nauseating for us to use ANC, so we preferred to turn it off. At this time, we were pleased to find that even passive noise isolation displaced many annoying sounds, even if not completely. It may be worthwhile to include an ANC strength adjustment slider in the application in the longer term, as there is also an application for both tabs. 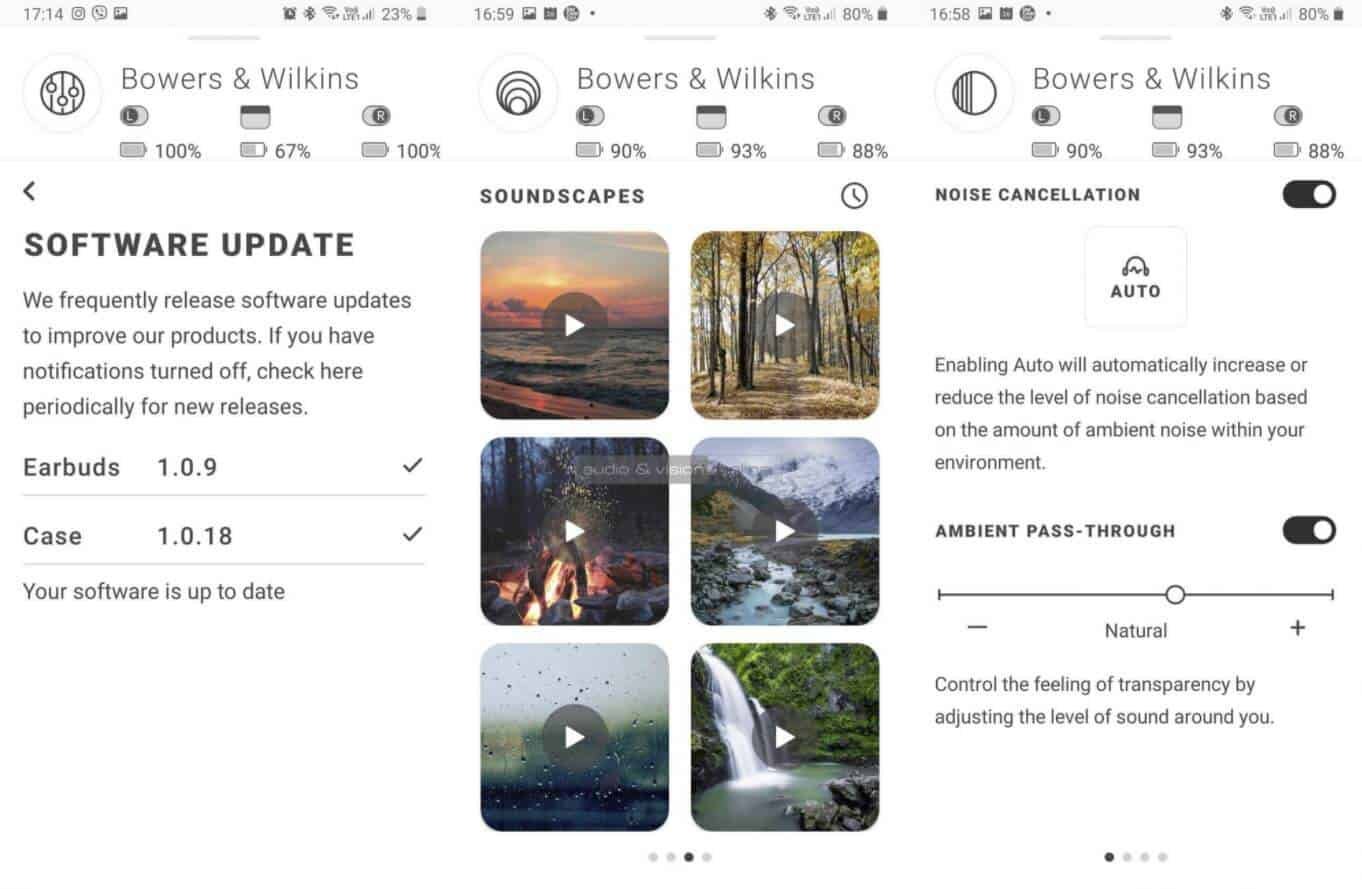 The PI7’s call sound quality has been excellent. Walking in the city, walking down the street, even a few meters from the car traffic, the speaker understood us clearly, but at the same time, we also heard what he said. With his smart microphone, he attenuated a significant portion of the more vivid noise around us somewhat, thus highlighting our own voice from the noise.

The PI5’s microphone turned out to be similarly good, but for some reason, we encountered irregularities. Sometimes the sound stuttered, sometimes spoke only one page, we got a version still waiting to be fixed in the software field, so these anomalies are promised to be fixed in a future update.

The operating time of both earphones proved to be good for the category: even after 3 days of use, the main battery charge did not fall below 70% after 1-2 hours of use.

The PI5, differently from aptX, used smooth but aptX Adaptive HD codecs and is, therefore, signal reception is improved. If you have already mentioned signal transmission, it is worth noting the Bluetooth transmitter function of the PI7 charger case. The latter means that if, e.g., if you are traveling by plane, you can connect the dock to the onboard sound system. For this purpose, the package also includes an adapter for converting a USB-C to a 3.5 mm audio jack plug. 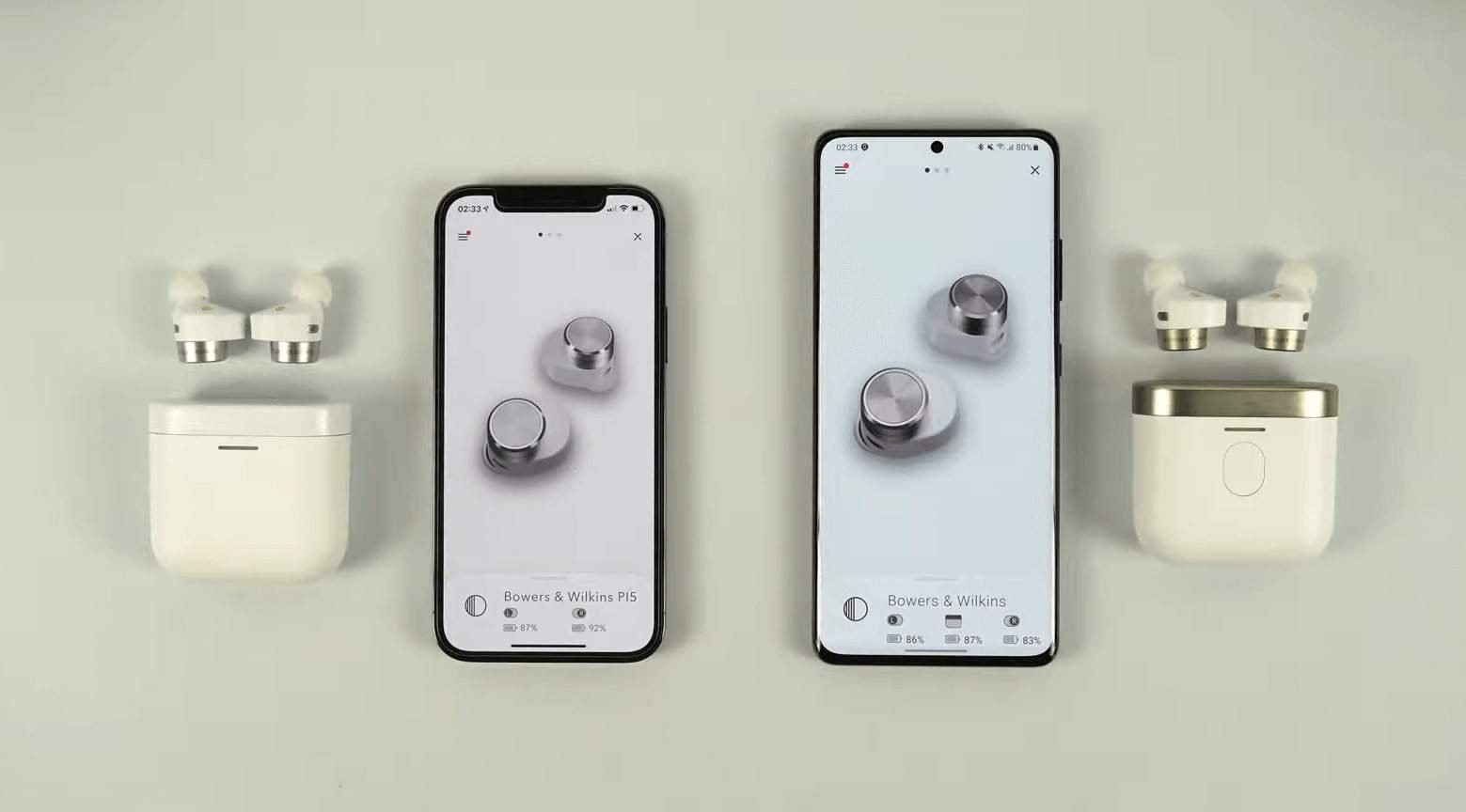 It can also be connected to the audio output of the television, or laptop PI7’s charging case can transmit the signal to another Bowers & Wilkins wireless headphone (e.g., PX7 ). The latter is conditional on both PI7 earphones remaining in the case.

It was a bold move for Bowers & Wilkins to get into the TWS category, and they were outstanding in terms of sound quality. The disadvantages of the fully wireless design have not been completely stripped down, but at the moment, in terms of resolution, sense of space, and dynamics, the PI7 is behind almost all its rivals.

From the point of view of design and application properties, we expected slightly more advanced solutions in terms of pricing, as many strong players are fighting each other in this field. The B & W again are throwing hard.