A response time of 3 ms (GtG) and the FreeSync premium functions are intended to inspire gamers, particularly for the monitor. A flicker-free backlight and a high sRGB color space coverage, on the other hand, should also appeal to different user groups.

Signals can be played back via the two HDMI inputs or the DisplayPort. The sound can be reproduced either from the two built-in 2-watt speakers or via the headphone output.

On the other hand, the existing stand is not very flexible but can be replaced if necessary using existing VESA 100 holes.

The monitor comes with a power and DisplayPort cable, a quick start guide, four screws. The monitor has a cross-slot device in the lower part with which the leg can be attached to the monitor. Users who want to operate the ViewSonic VX3268-2KPC-MHD via HDMI must purchase an additional cable.

The stand is attached to the stand with a screw without tools. This combination must then be mounted on display with four screws. A small tool is included for this, which means that you do not need your tool.

The base protrudes almost 25 cm on the desk. However, the two narrow areas are a maximum of 2 cm wide, which makes it look more delicate overall.

The monitor has a modern design that is almost frameless on three sides. An area of ​​around 6 mm on these three sides is not used for the image display during operation. Since the entire design was made matt, there are no reflections.

The back has the manufacturer’s logo and ventilation slots in the upper area. VESA 100 holes have been made in the middle, which the attached stand has not been blocked. For example, a mini-PC can be attached to it. Alternatively, it is possible to attach an alternative bracket to compensate for the hardly available setting options of the original stand.

As already mentioned, the stand is not very flexible. The distance from the desk to the lower edge of the monitor is therefore always around 9 cm. The image display begins after about 11 cm.

The inclination is the only setting option that the stand offers and can be adjusted continuously. The adjustment range is quite tight, so two hands should be used. As a result, the ViewSonic VX3268-2KPC-MHD remained in its position at any desired point. 3 degrees to the front and 21 degrees to the rear are possible.

The build quality of the monitor is good. The matt finish also makes it look high-quality, even if it was mainly made of plastic. The look of the feet is a matter of taste – from our point of view, they protrude a little far on the desk.

The large 32-inch display requires around 32 watts of electricity at 140 cd / m². This leads to the excellent energy efficiency of 1.2 cd / W. At full brightness, we measured consumption that ViewSonic states as typical. Fortunately, we are still a long way from the maximum manufacturer specifications. The ViewSonic VX3268-2KPC-MHD does not have a power switch. However, this is bearable since the device hardly draws any power when switched off and is still frugal even on standby.

Both the screen surface and the finish of the case are matt, which means that there are no annoying reflections in any area.

The ViewSonic VX3268-2KPC-MHD not delivered at full brightness level; the picture looked appealing the first time when switched on. The contrast was high, and the overall picture was pleasant. In addition, no noticeable conflicting effects were visible. 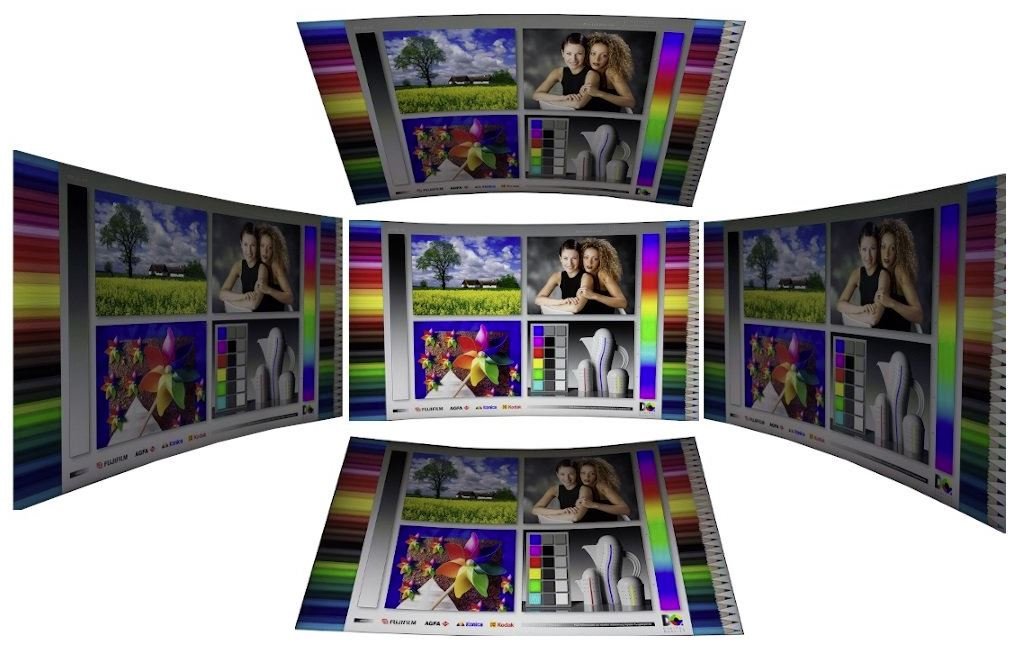 The ViewSonic VX3268-2KPC-MHD behaves in this area like many non-curved competing products with MVA panels. The brightness and contrast decrease at extreme viewing angles, but there is no general color falsification. In the case of a curved monitor, however, a central position is still more critical since straight vertical lines, in particular, can be perceived as distorted when looking at the screen from a lateral position. We generally do not recommend curved displays for viewing by several people at the same time.

It is advantageous for the operation of an alternative bracket if the connections are led away flat downwards. This is the case with the ViewSonic VX3268-2KPC-MHD, which means very narrow shelves can also used. The power connection is on the right-hand side, and the four other sockets are on the left-hand side when viewed from the front. Two HDMI 2.0 connections, a DisplayPort 1.2, and an audio output are installed.

Both the HDMI and the DisplayPort inputs can operate the native resolution with the maximum possible 144 Hz.

When it comes to the OSD menu 2 buttons and a small joystick are located under the right side of the monitor. However, if the monitor is very close to a wall or another display, problems can arise because the subject cannot rotate. The joystick can be easily operated with one finger and is both tight and smooth. Pressing the joystick produces a deafening mechanical clicking noise, while movement in one direction is relatively quiet. Quick navigation is possible as you almost only have to navigate in one of the four directions to activate a setting.

However, a certain amount of familiarization is necessary as the center is pressed intuitively when the activation is to be carried out. In the test, this often led to the OSD closing unintentionally.

The other two keys also have a pleasant pressure point but feel slightly spongy and not so perfectly balanced. The last button switches the ViewSonic VX3268-2KPC-MHD on or off; the other calls up the shortcuts. Both are therefore not required for the actual navigation in the OSD.

A press of the middle button brings up a quick menu. It has various options that can be switched through with the joystick and cannot be exchanged by the user. The picture modes, volume, brightness, contrast, and input signal are therefore always available.

To the right of the quick menu and in the actual OSD, it shows which direction of the joystick triggers which function. The button on the monitor is only required to call up the quick functions and does not have to be touched afterward. 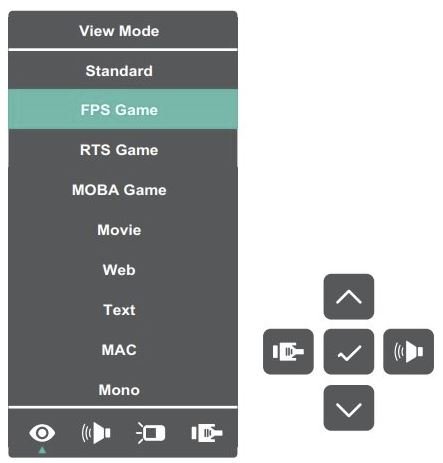 The main menu is divided into six tabs. The division makes sense, even if only the volume can be adjusted in the audio settings. The OSD is also permanently displayed at the bottom right.

The background light of the monitor is not reduced by pulse width modulation (PWM), so there are no interruptions in the luminous flux (flickering). Thus, the ViewSonic VX3268-2KPC-MHD is suitable for more extended sessions even with reduced brightness.

The monitor supports FreeSync from 48 to 165 Hz, shown to us in the graphics card driver. There is no explanation of this in the manual. The 1 ms mode, which we will go into in more detail below, cannot be used when FreeSync is activated.

The ViewSonic VX3268-2KPC-MHD has two 2-watt speakers, the volume of which can be controlled in the OSD. This option is also available in quick access. Alternatively, the audio signal can be passed on to headphones, for example, via the audio output.

The ViewSonic VX3268-2KPC-MHD was able to achieve a good grade in many of our evaluation categories.

The response time is no longer in a perfect range, with an average of over 10 ms. For casual gamers, however, these results are perfectly adequate.

In contrast, the device does well in other areas. It has a very high contrast of over 4000: 1 and a perfect sRGB color space coverage of 99%. After calibration, the ViewSonic VX3268-2KPC-MHD is quite suitable for image processing at home.

Some manual intervention options are available for the feed of external signals. However, the aspect ratio manually and that strange formats can therefore lead to distorted images.

For users looking for a simple gaming monitor, the ViewSonic VX3268-2KPC-MHD is not the best choice. As an all-rounder, however, it scores with good image quality and solid switching times.