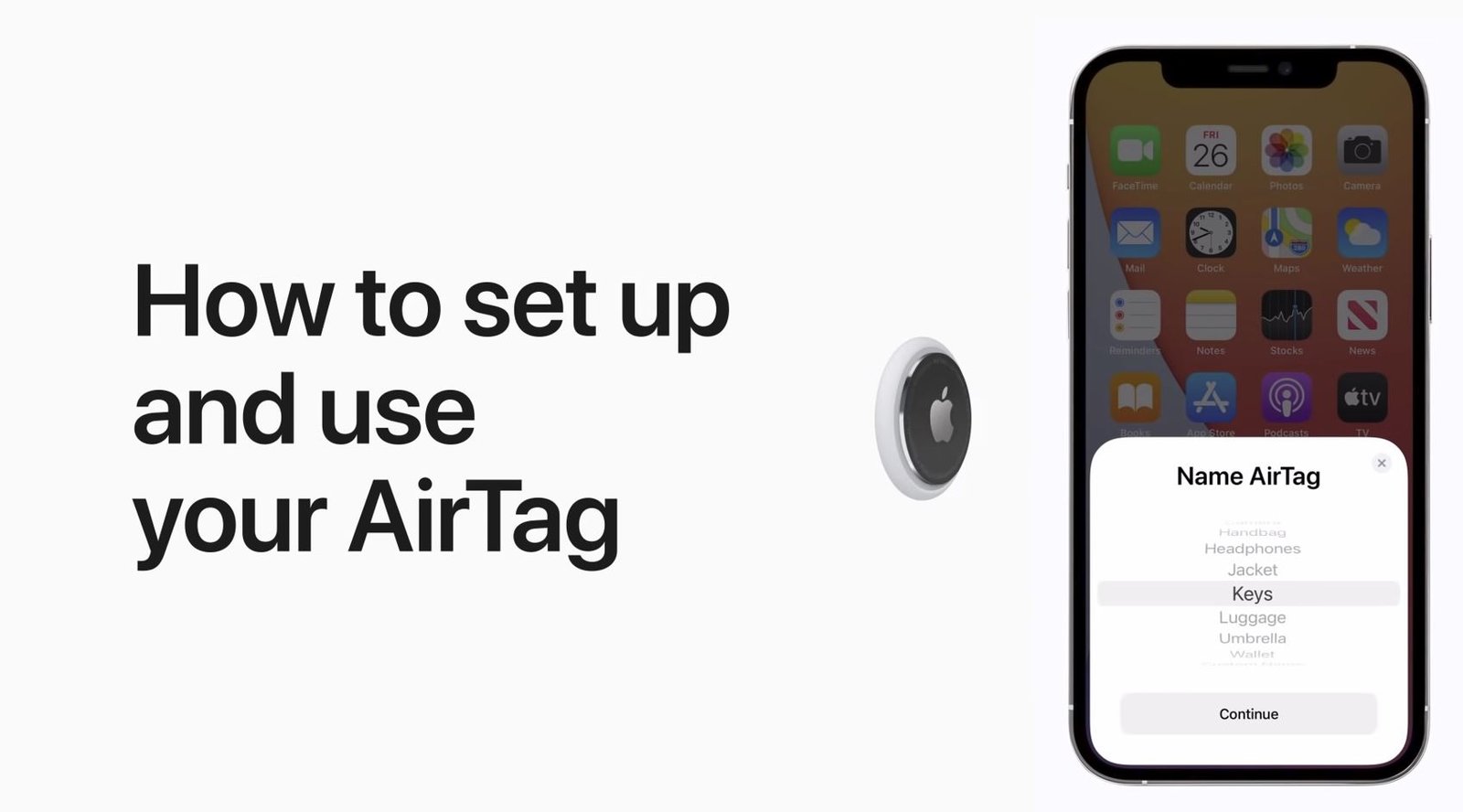 AirTag is a Bluetooth-enabled smart tag that helps you keep track of things like keys, toys, and other small objects, allowing you to track their movement and collect data about them. In this article, we’ll show you how to use AirTag to track the movement of objects in your home and learn some of the data that it can collect.

Using AirTag is not so difficult, but understanding how to use it and its functions will help you fully utilize AirTag. Those who are already using AirTag and those considering purchasing it in the future can refer to it, so please refer to it!

AirTag is Apple’s loss prevention tag (search tag) that allows you to find your location by sound or location information displayed on the map by attaching it to something you do not want to lose, such as a wallet or key.

What is AirTag? What you can do with AirTag

By using AirTag, you can do the following:

For example, if you’re worried about losing your wallet or your keys, you can attach an AirTag to them. The “Find My iPhone” app on your iPhone, iPad, or Apple device can show you AirTag’s location if you want to know where it is. 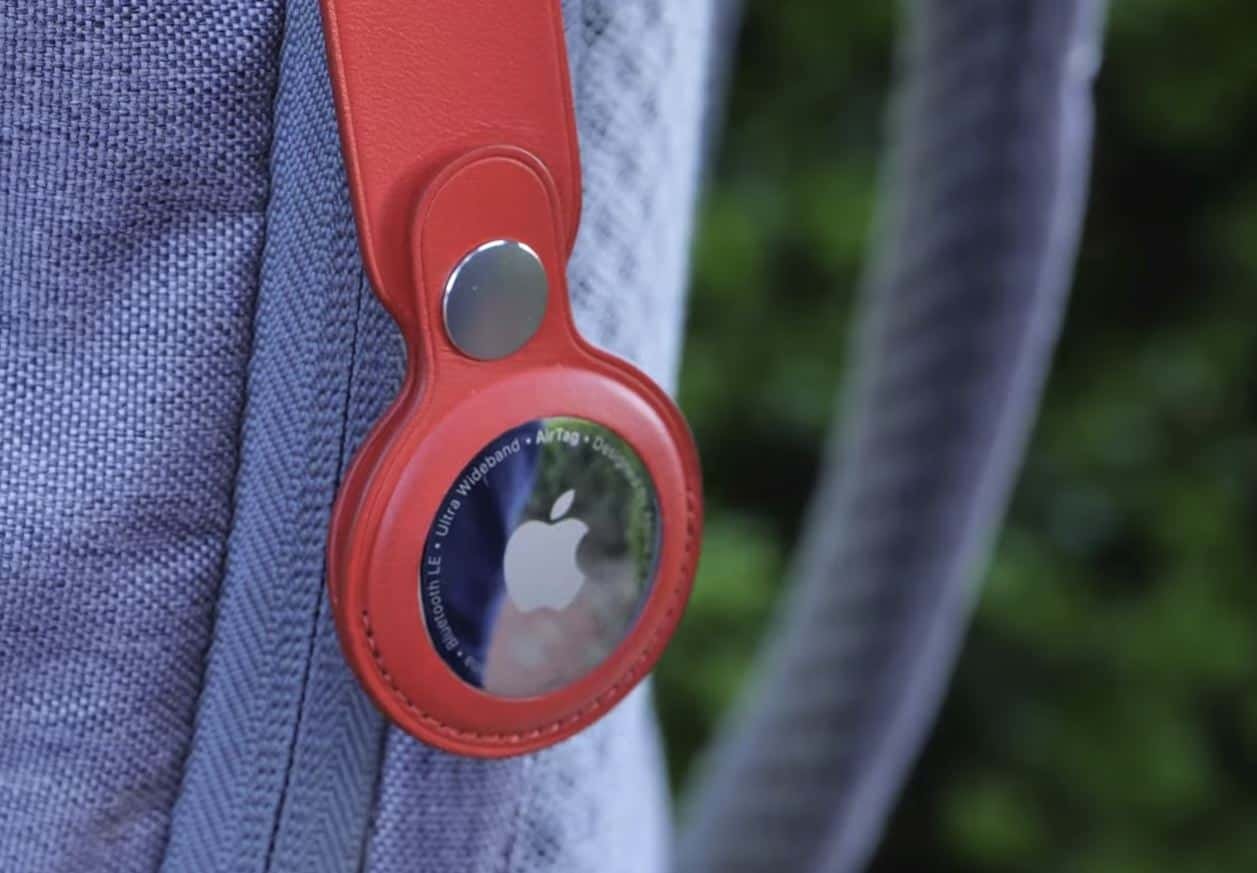 You can also set it to notify you when you leave AirTag.

Using an AirTag as a “loss prevention tag” and as a “forgotten item prevention tag” is an excellent way to keep track of things you frequently use, such as your wallet or key.

To get started with AirTag, first add it to the Find My iPhone app. 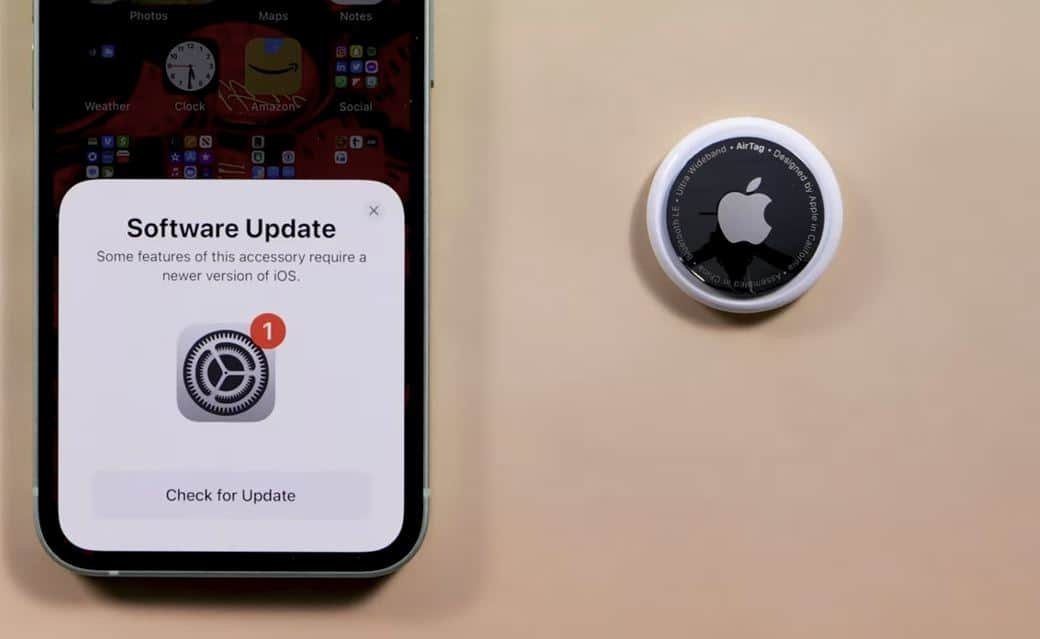 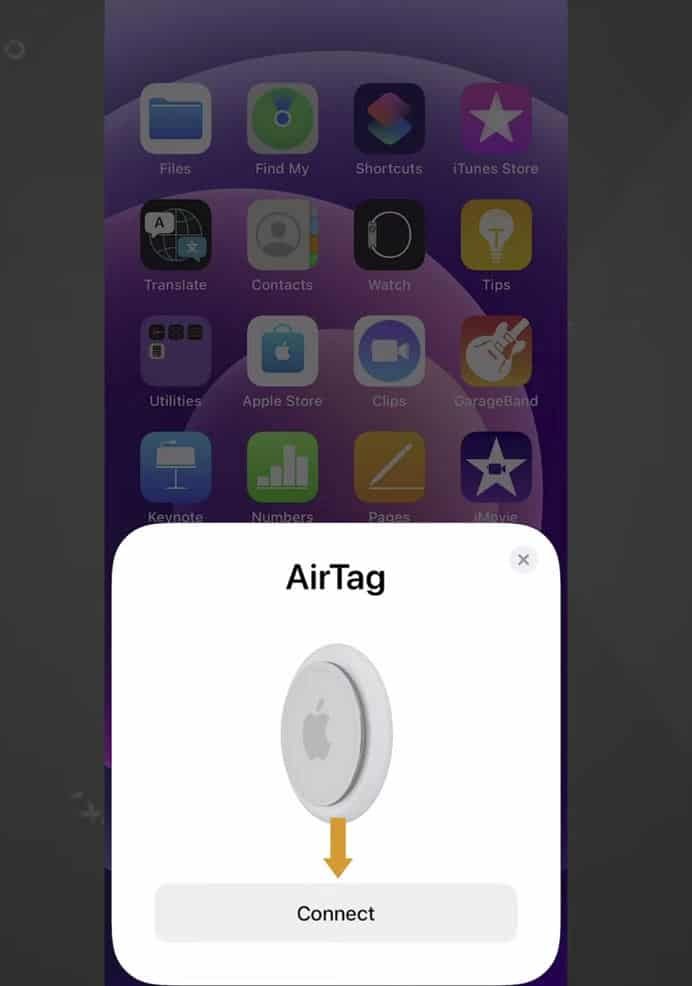 If it is new, remove the battery insulation sheet and place it near the iPhone. Tap “Connect” if it pops up automatically. 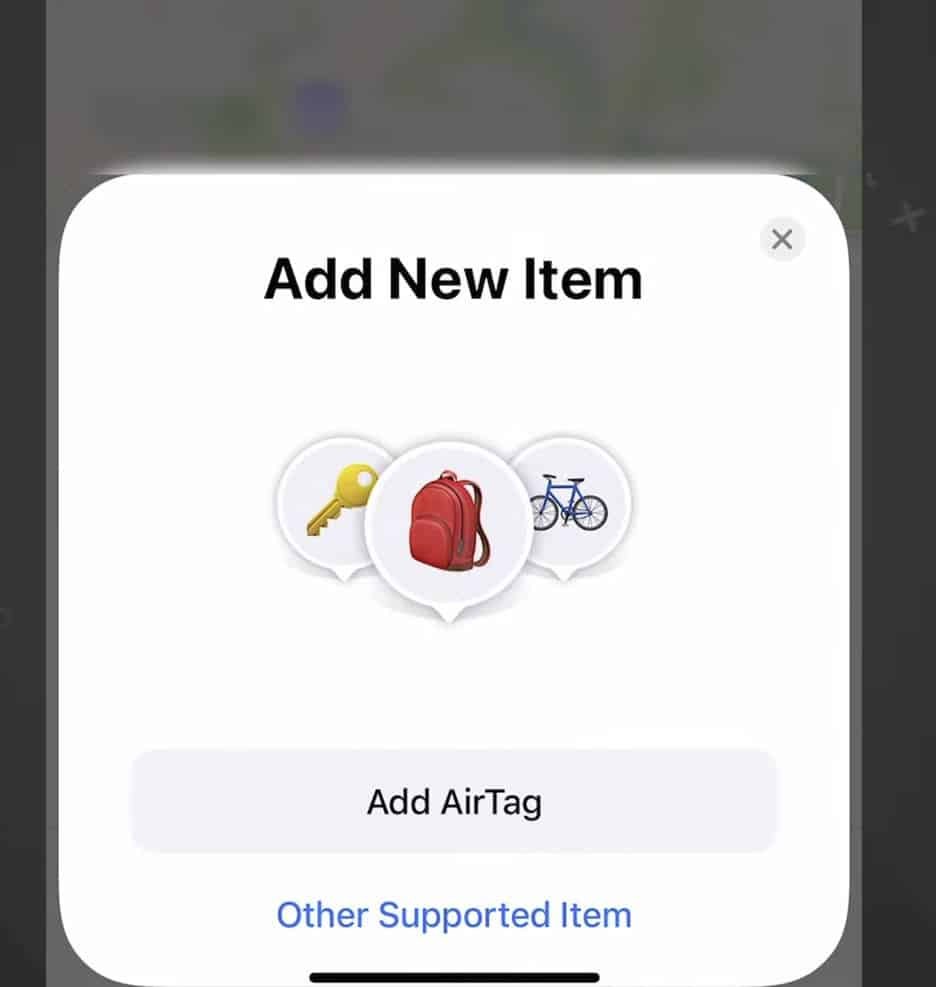 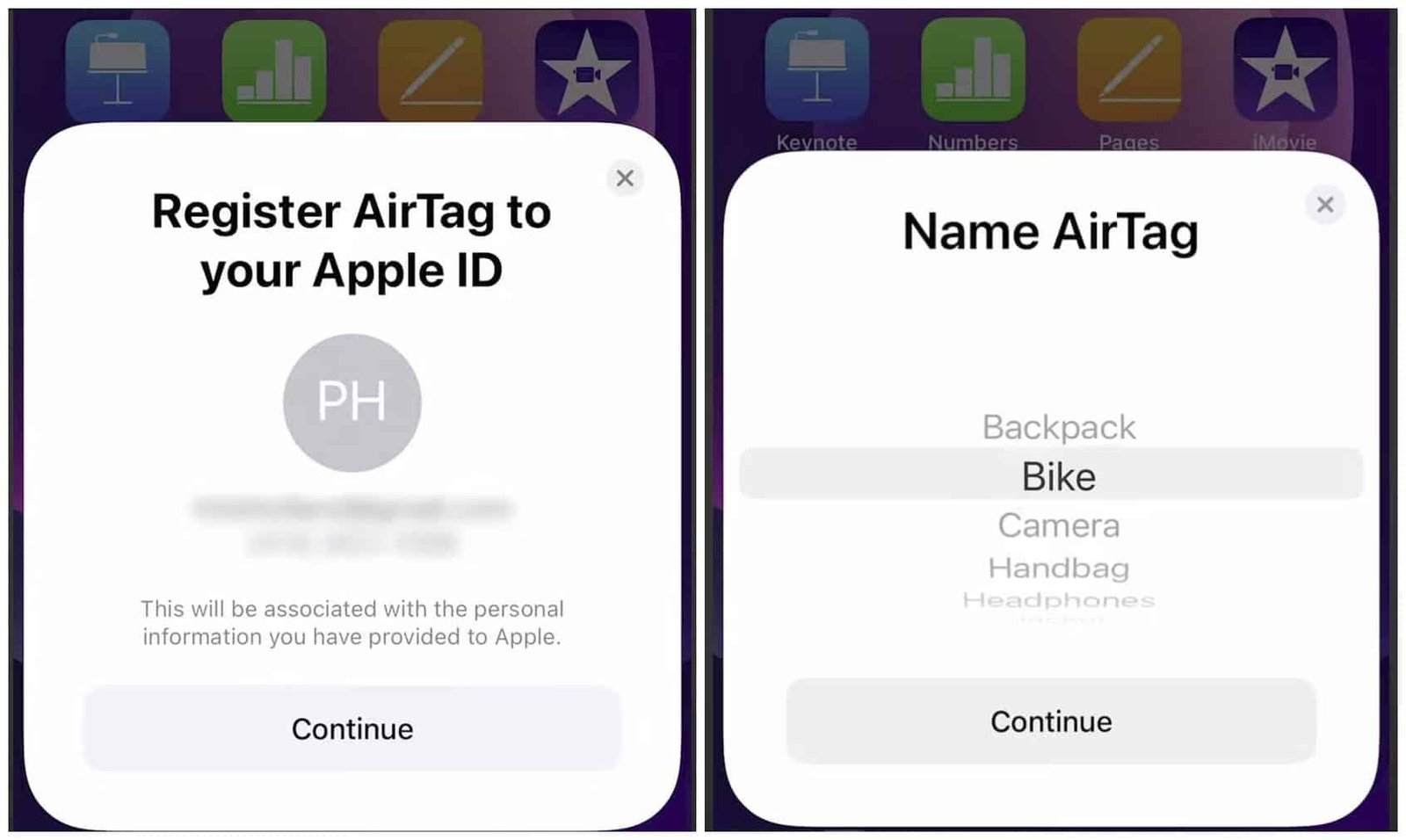 Next, set the name of the AirTag to be added. Select the name provided by default, or select “Custom Name” and set any name.

AirTag is linked to your Apple ID. Read the notes and tap “Agree” to complete AirTag setup.

Search on the map: 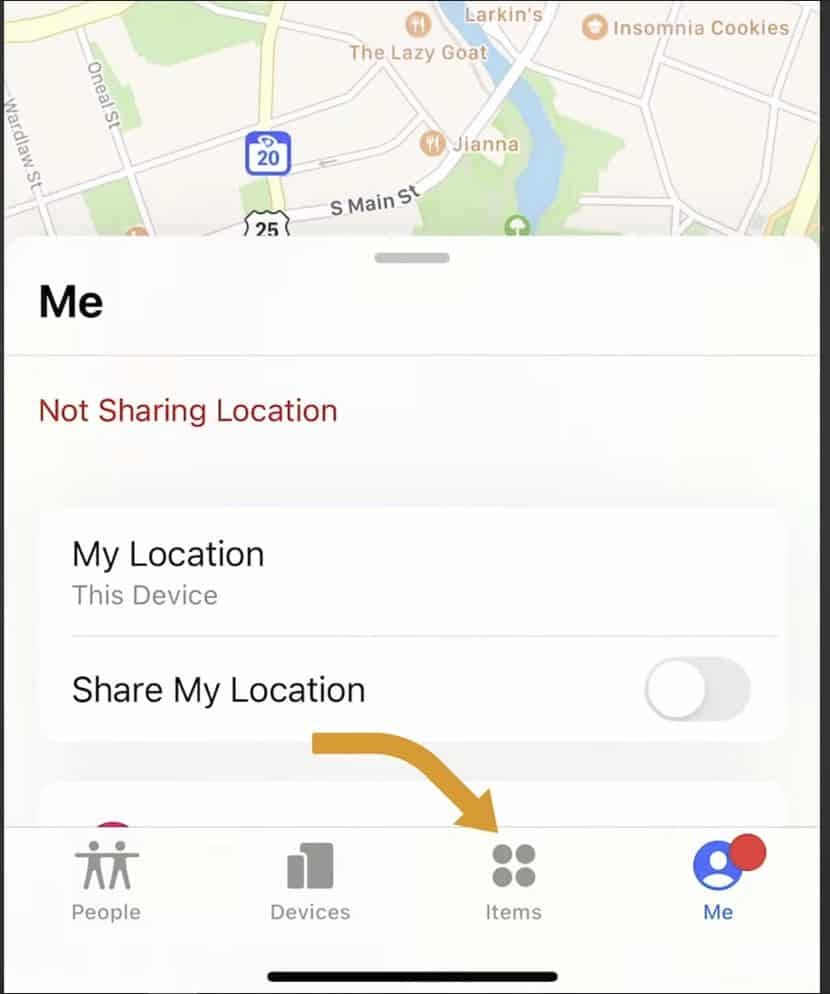 The location of AirTag is displayed on the map, and you can check the details by tapping the icon. 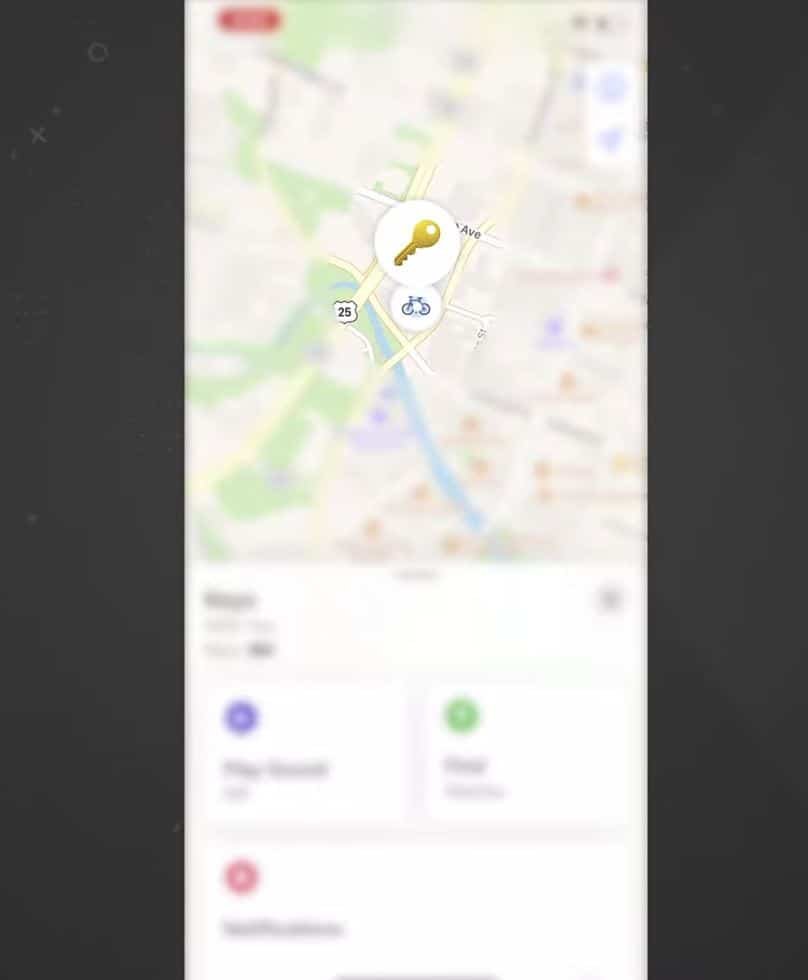 Select the AirTag you want to find in the “Find My iPhone” app, tap “Play Sound,” and you can search by relying on the sound emitted from the AirTag. 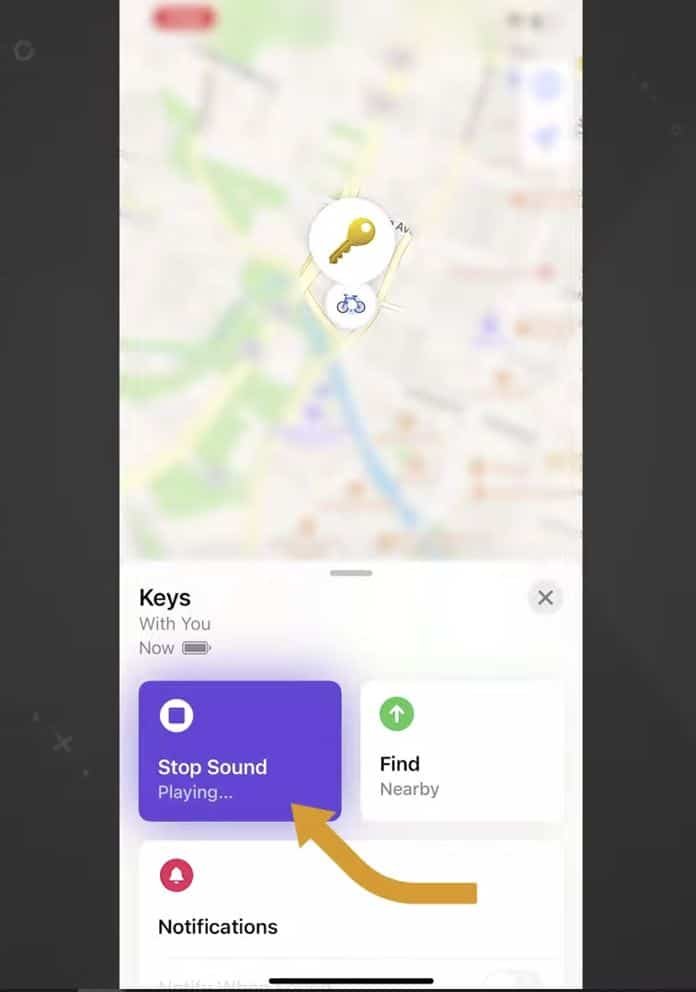 When you tap “Play Sound,” AirTag will make a sound. The sound will stop automatically in about 5 seconds.

Get guided to the location of AirTag:

Select the AirTag you want to find in the “Find My iPhone” app, and tap “Route” to display the route to the location of the airtag or have it guided by the navigation. 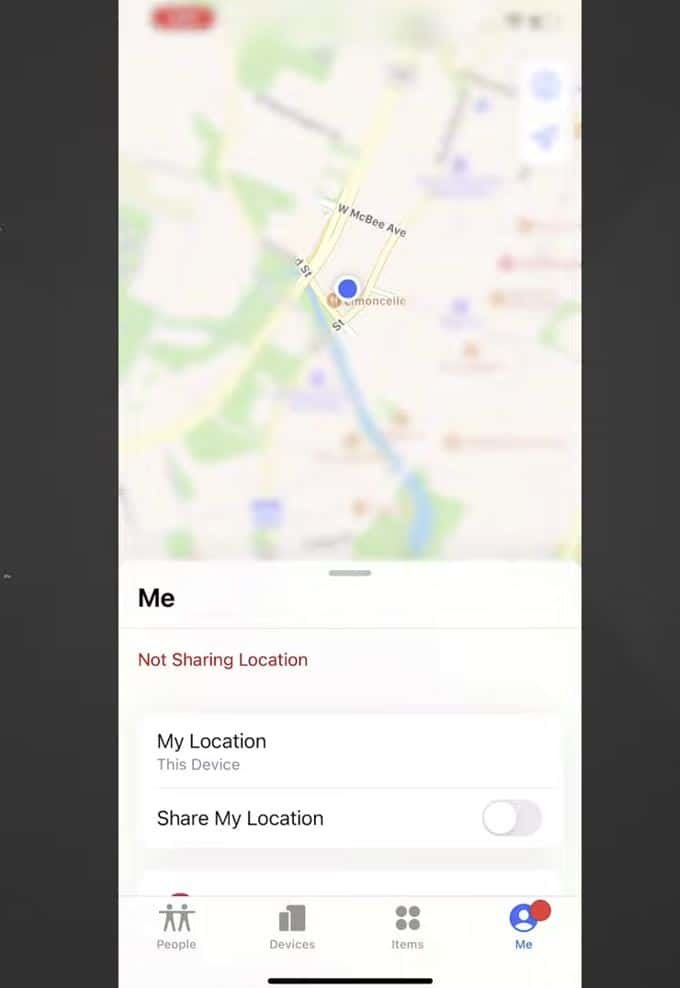 Get notified when AirTag is detected:

By selecting AirTag in the “Find My iPhone” app and turning on “Notify when detected”, you will be notified when the location of AirTag is detected.

Tap Notification to see the location of AirTag on the map.

iPhone 11 and later support the “Find the exact location” feature. With this feature, the direction and direction to AirTag will be displayed on the screen. 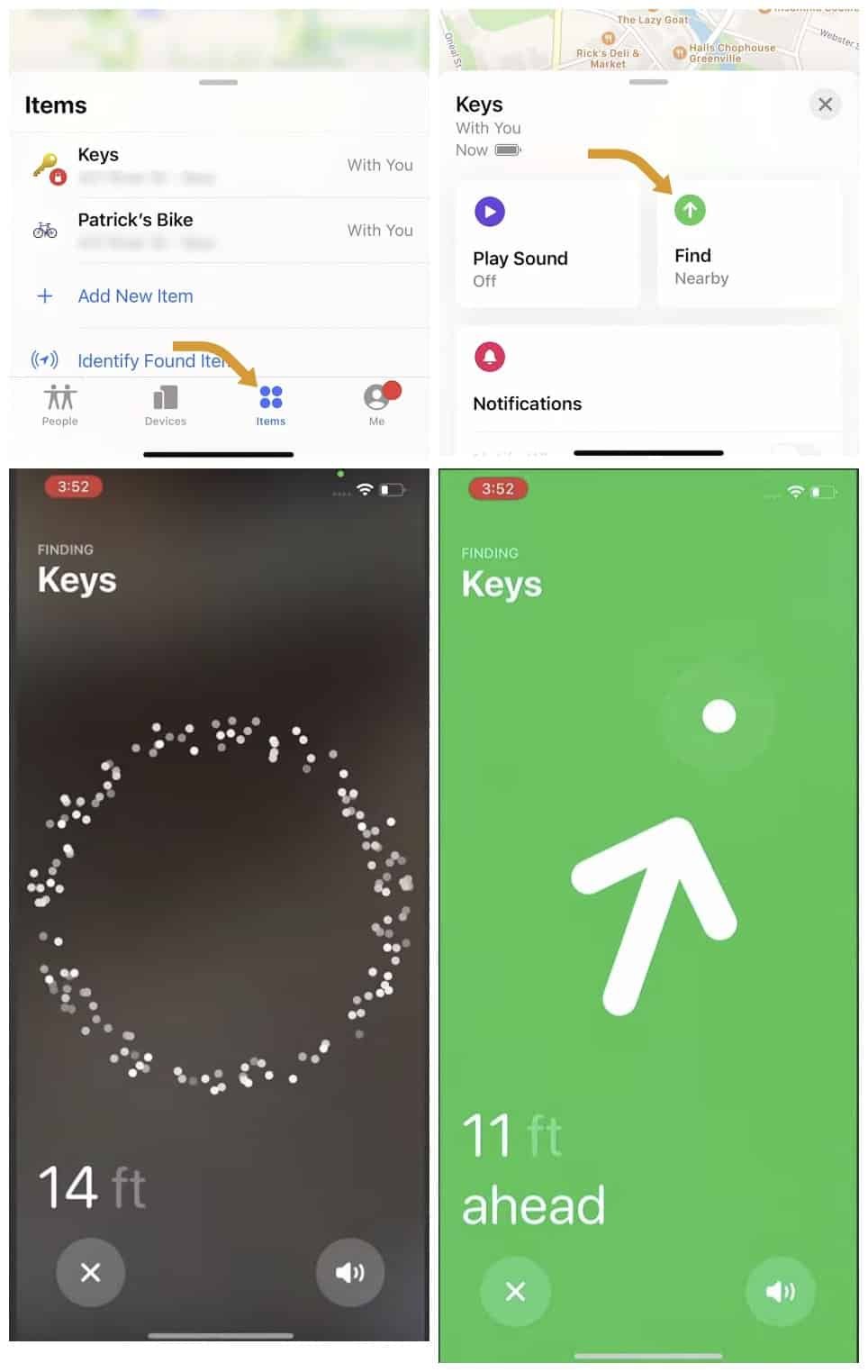 You can also play and search for sounds at the same time.

The “Precision Finding” function can only be used within the range where the iPhone and AirTag can communicate (a radius of about 10 meters).

When you turn on AirTag’s Lost Mode, Notification on Detection is automatically turned on, and you can leave contacts and messages for anyone who finds AirTag.

To turn on “Lost Mode” of AirTag, select the target AirTag from the “Find My iPhone” app> “Belongings” and tap “Enable” to turn on Lost Mode. 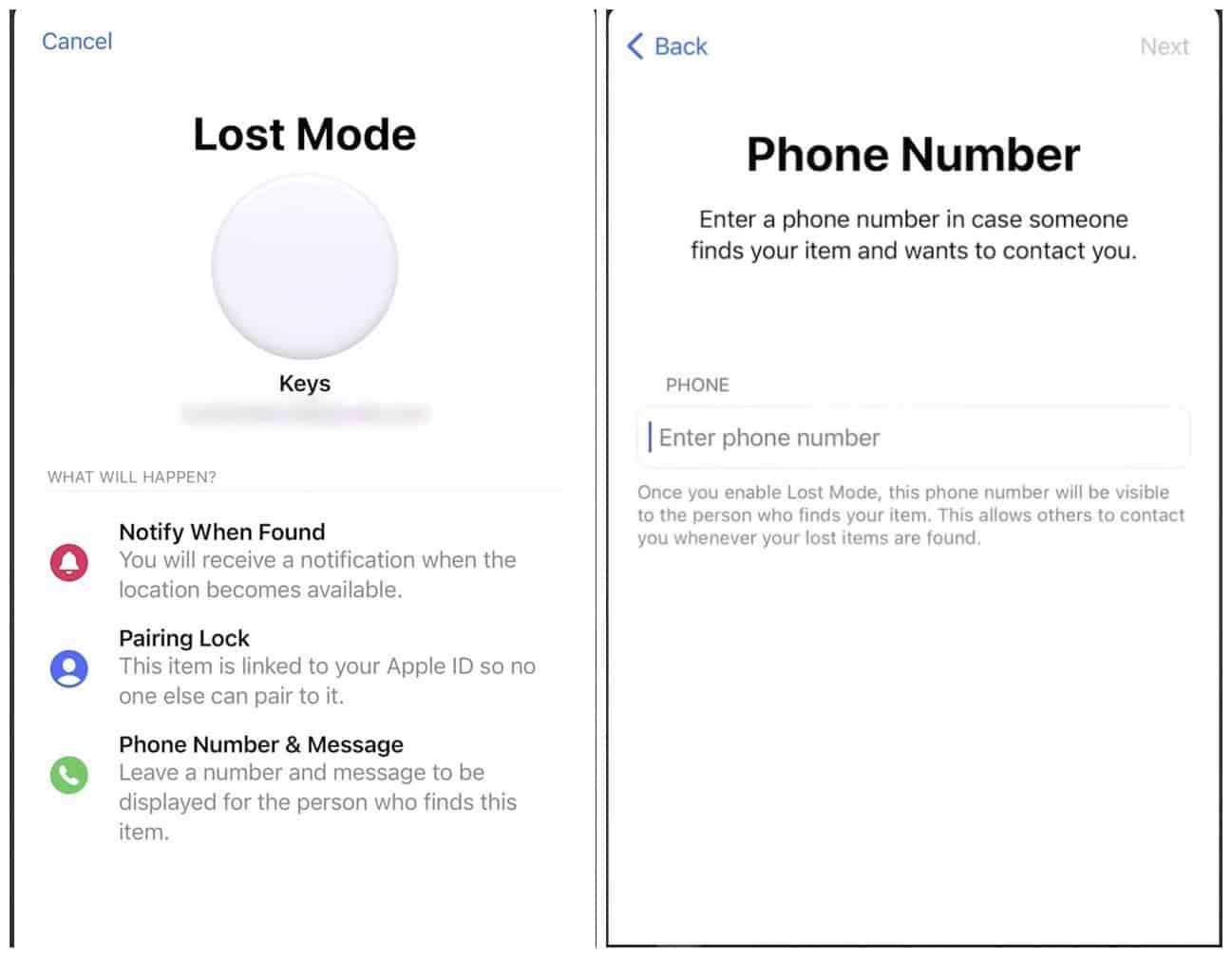 Next, enter the phone number or email address that the owner can contact in case the person who picked up the AirTag wants to contact you. Tap “Next” and then “Enable” to complete.

If you find an AirTag in lost mode,

You can check the contacts set by the owner by holding an NFC-equipped iPhone or Android smartphone over AirTag with Lost Mode turned on.

You can access the web page where you can get information about AirTag by holding it over AirTag on your NFC-equipped smartphone. Only when AirTag’s “Lost Mode” is on, the contacts set by the owner will be displayed. 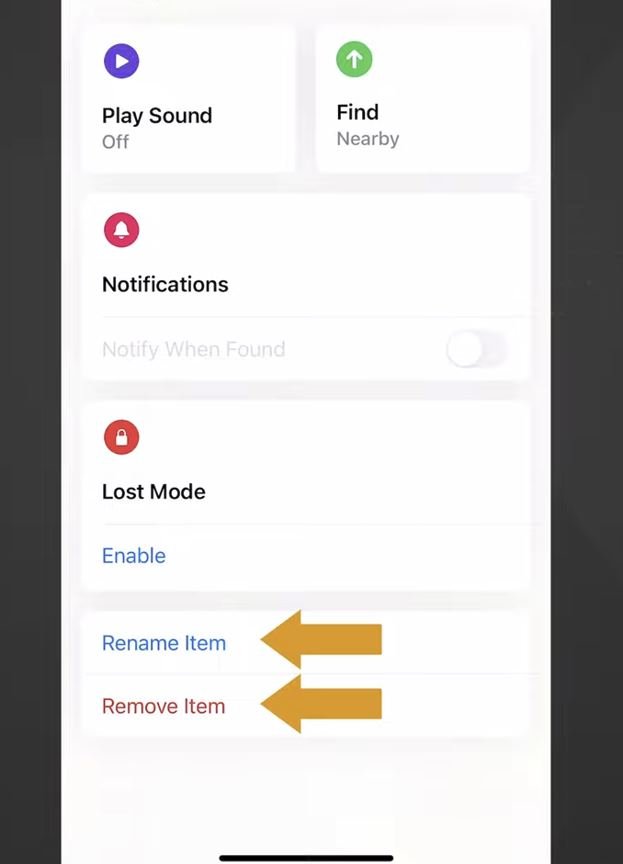 Select the AirTag you want to delete from the “Find My iPhone” app, tap “Delete your belongings,” and then tap “Delete”. Use this method to remove AirTag, such as when transferring it to another person.

The AirTag contains a button battery (CR2032), which can be replaced by removing the stainless steel battery cover (glossy surface).

After setting the battery with the plus side facing up, turn the battery cover clockwise to set it. If the battery is set normally, you will hear a sound to that effect.

If you’re new to AirTag, here are some Frequently Asked Questions (FAQs) about how to best use the device.

Q: What is AirTag?
A: AirTag is a Wi-Fi-enabled tag that can be attached to objects in your home or office to track their location and movements.

How does AirTag work?
A: When you activate AirTag, it starts broadcasting a Wi-Fi signal that can be detected by any Wi-Fi enabled device in range. By tracking the movement and location of these devices, you can access information such as the time and location where an object was last seen, as well as its current position.

Can I use AirTag indoors?
A: Yes! AirTag has an adjustable antenna that allows it to operate in almost any environment.

Q: What types of devices can I use with AirTag?
A: You can use AirTag with any Wi-Fi-enabled device, including smartphones, tablets, computers, and other smart home devices.

Liquid Cooling vs Air Cooling: Which CPU Cooler Is Better