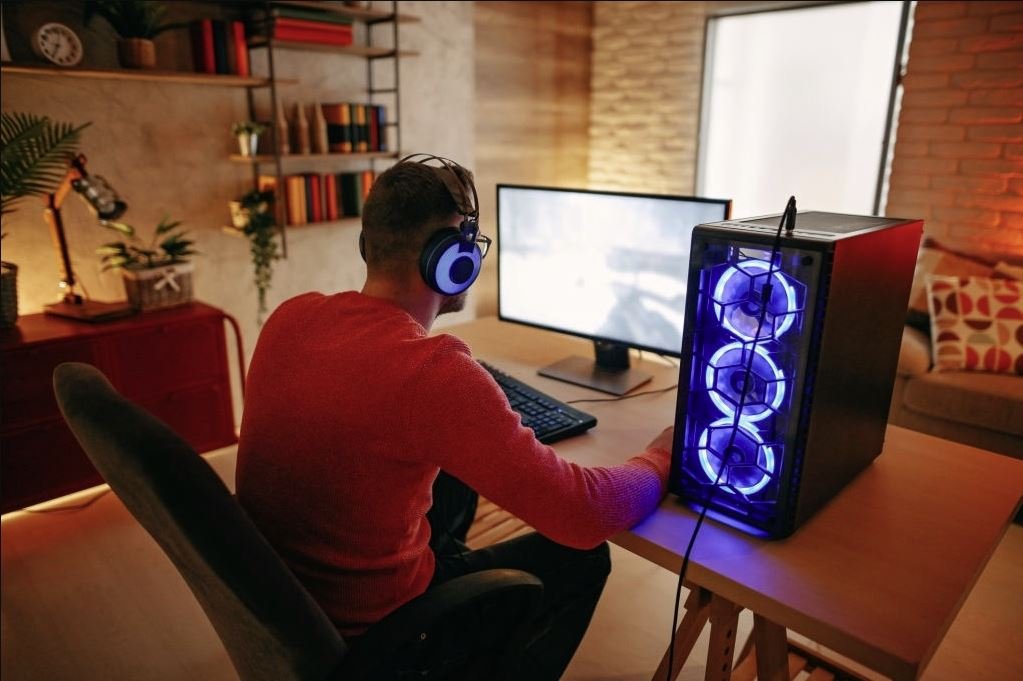 Building a PC is one of the most enjoyable hobbies of our time. If you’re a technology enthusiast, there is little that can make you feel better than building and customizing your hardware. Customizing a gaming machine has become a fairly popular hobby with the advent of high-performance yet relatively expensive PC components.

Personalization is a big part of the appeal of a custom gaming machine compared to something like a ready-made console.

More and more computer components have lighting, and in turn, each time, this lighting is increasingly complex or has more options.

Previously, there were few opportunities to customize a gaming machine to your liking. In the best-case scenario, you can get colored components like graphics cards, memory modules, or motherboard heat sinks. Designing a PC to fit a particular theme was extremely difficult, and even if you did manage to do it, you were stuck with the same color combination and theme until you built an entirely new machine.

This was rather inconvenient, as even the most beautiful color themes became boring over time and required changes. Discover RGB lighting that has changed the whole game when personalizing and customizing your gaming PC. 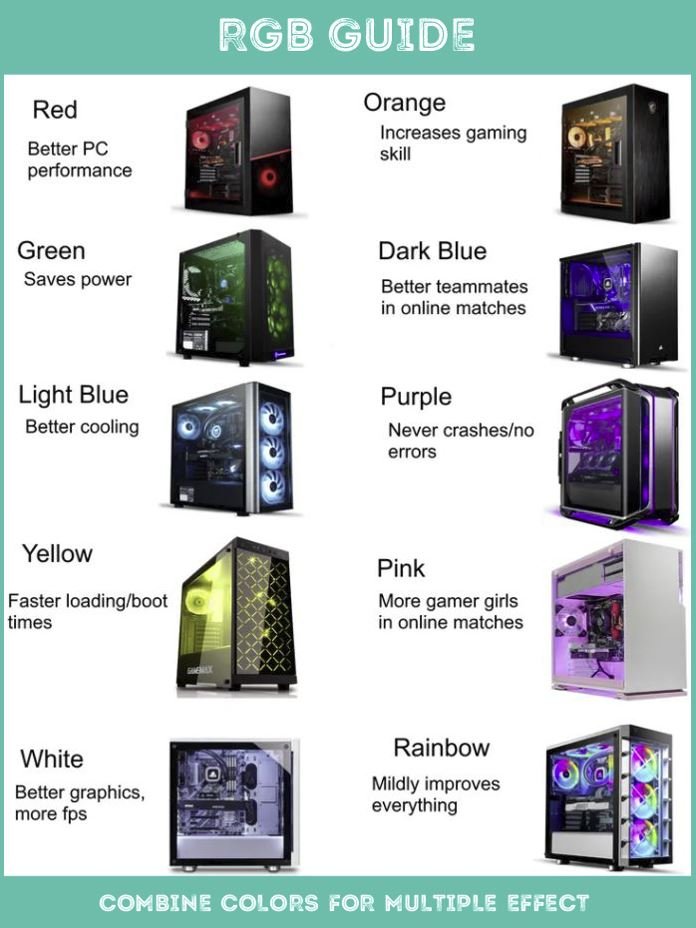 In addition to having typical RGB components, we also have ARGB components, also called DRGB. Let’s see what they consist of and what the differences are.

Well, everyone knows the typical RGB lighting that can get up to 16.8 million colors (if the LEDs are of quality). Of course, all the LEDs on the same LED strip light up the same color. The color can change, but all the LEDs change at the same time.

The ARGB lighting (Addressable RGB) is almost equal but has the advantage that not all LEDs have to be in the same color at a time; this way, we can get wave effects, gradients, etc.

This has led to motherboard manufacturers adding the ability to control lighting directly from the motherboard. Of course, each brand uses a different name for it:

How to tell if a component uses ARGB or RGB lighting

The easiest way to tell what type of lighting a component has is to see what connector it uses. Current motherboards use two types of power connectors for LEDs:

RGB devices are compatible with 12V connectors, which have 4 pins and are currently found on many motherboards. More motherboards have 4-pin RGB 12V headers than newer aRGB headers due to their lower cost. RGB 12V devices are NOT compatible with aRGB 5V connectors. Since 5V aRGB connectors can only supply 5V power, lighting on 12V RGB devices will likely not show up or be very dim. The power channel of the 5V connector will match one of the color channels on the RGB plug, and therefore you can get one color to display on the device. 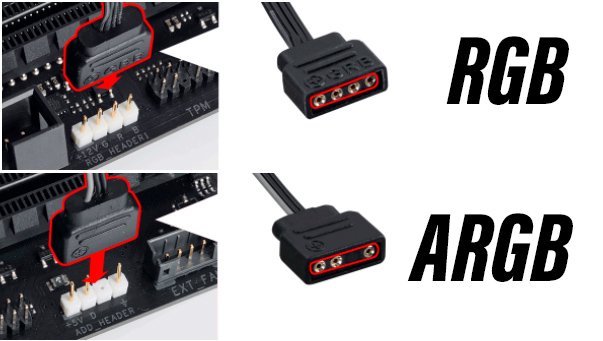 Each color pin receives a certain amount of energy that illuminates that particular connector. It is clear that the more power on the pins, the brighter the corresponding color will be. Mixing and matching different power combinations and different light levels of colors results in three colors combined into one final color. 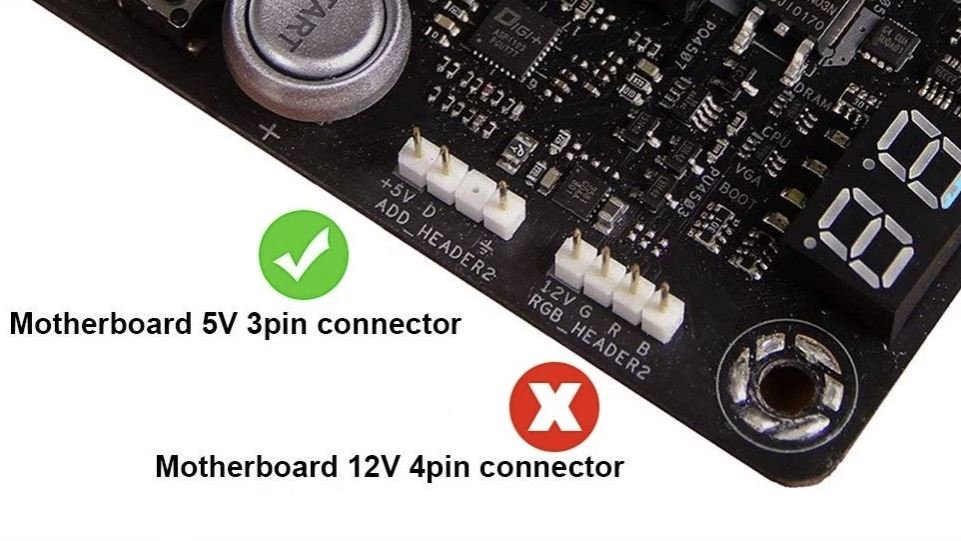 So, in the end, you need to decide if you want to use the RGB ecosystem or the newer aRGB. Standard 4-pin RGB devices still exist in significant numbers and tend to be cheaper as well. They are also slightly safer to work with, as there is no way to accidentally damage the LEDs inside the device by inserting the plug. You can also make more extended stubs and install longer LED strips with 12V plugs versus 5V plugs due to the difference in wattage. This means the RGB standard is a great way to keep your desktop lighting in sync with your PC lighting without using an external controller like this.

On the other hand, most manufacturers quickly replaced RGB devices in the market with newer aRGB devices, and aRGB headers on motherboards are becoming more common. They offer more natural whites, brighter colors, wider effects, and more customization than traditional 12V RGB. They’re a little more expensive now, and you risk damaging the LEDs if you accidentally plug a device into the wrong connector, but these trade-offs don’t really matter if we look at it objectively. However, aRGB is the standard until it is replaced by something even better, which is a general trend in the computer hardware industry.

Differences Between US vs UK Keyboard Layout