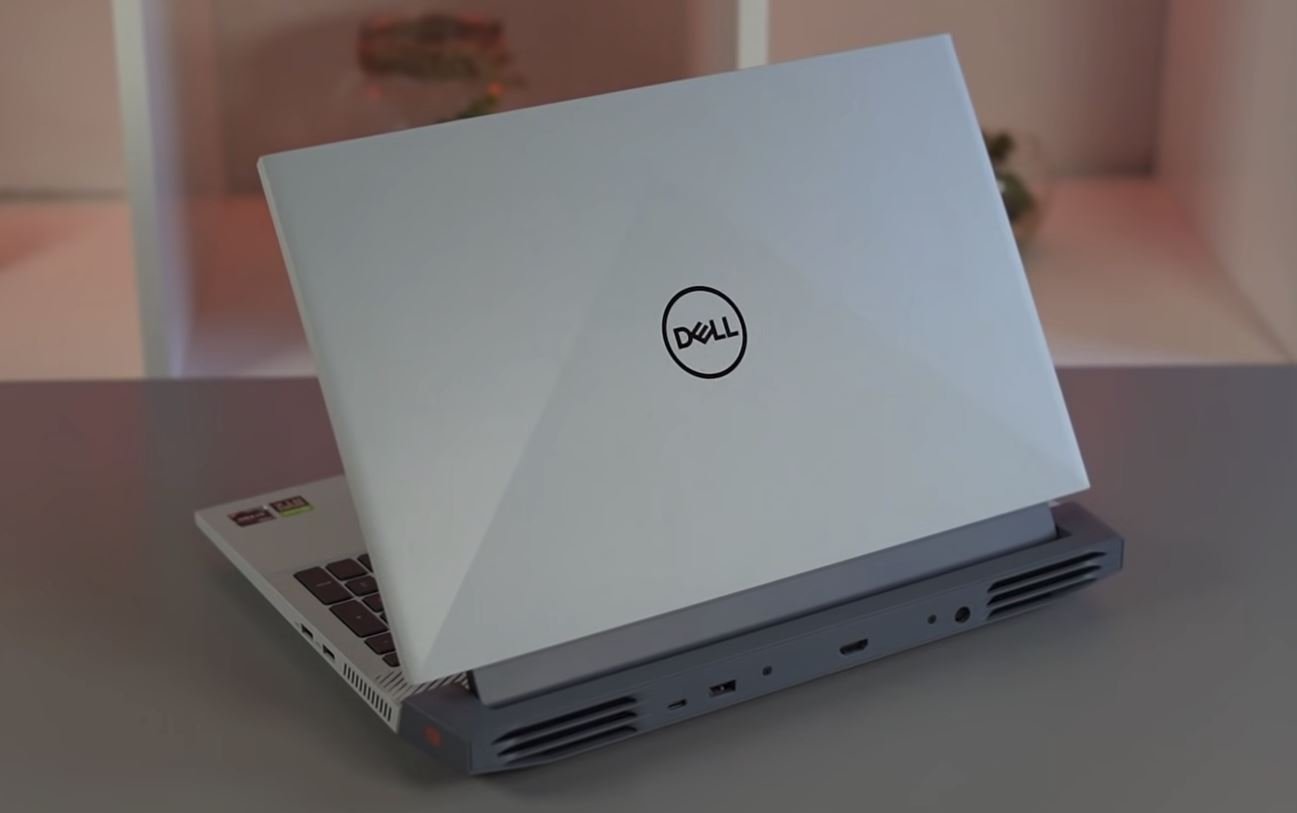 For most people, when it comes to laptop gaming and Dell, the Alienware series comes to mind. Except that Dell also offers the “G” range with many advantages, starting with its much more affordable price positioning.

The Dell G15 Ryzen Edition (2021) has good processing power, solid build, fantastic battery life, and great value for money, so it’s perfect for mainstream gaming, but if you want a thinner / lighter laptop or a laptop with more power, take a look. In the other place. Screen with more speed and impact.

The device comes with an AMD Ryzen 7 processor and NVIDIA GeForce RTX 3050 discrete graphics. In addition, the user has a Full HD screen, a backlit keyboard, a spacious 512 GB SSD, 16 GB of RAM, and a large battery. The price for all these joys is about $ 1400.

When Dell does in Gaming, it is not with the greatest subtlety. While the trend among mid-range gaming laptops is towards an increasingly sober appearance (Asus TUF Dash, HP Omen…), our G15 assumes its muscular character. Visually imposing, in particular, because of its massive outgrowth at the back, the PC is surrounded by sharp but not sharp edges and aesthetic details that betray its Gaming affiliation without being in a flash. Only the two orange “G” on the side and to the left of the touchpad added to the light ring on the power supply socket constitute the color accents; the rest is rather sober on the whole.

The laptop is completely plastic – visually, of course, this material cannot be confused with metal. Nevertheless, the build quality and the practicality of the case leave a positive impression: nothing cracks or creaks during use, the keyboard unit, although it flexes, is within reason, and if you press on the lid, the picture quality does not deteriorate. The laptop is gray with black accents – such a duo looks impressive. The only major detail here is the Dell logo in the center of the lid. The device turned out to be not the lightest and most compact; many competitors have a chance to bypass it according to these criteria. 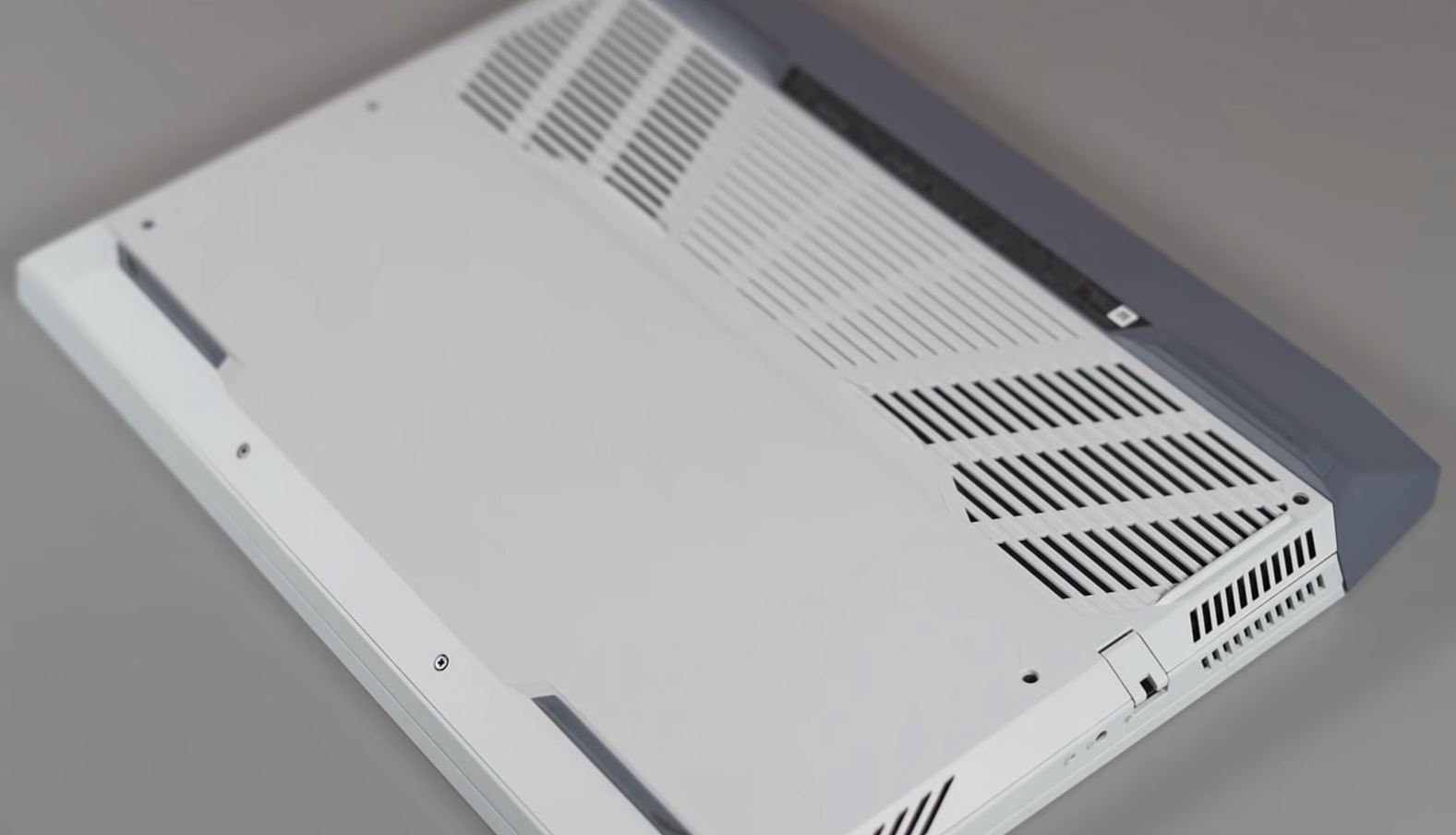 The hinge mechanism is represented by two small hinges firmly holding the display in position. The maximum opening angle of the screen is about 140 degrees. The keyboard is full-sized, with a digital block; it is a rather compact touchpad. Several interfaces are spaced along the side edges; others are on the case’s back. The laptop is upgradeable: after removing the bottom cover, you can access the RAM, SSD, battery, Wi-Fi, and fans.

Finally, we can not mention the PC’s look without talking about the Phantom Gray color of this Ryzen Edition, a light gray that draws towards the putty, speckled with small blue dots. At least it’s original, but if it looks a bit like a kitchen splashback. Everyone is free to judge their appeal, but we will still note a rough feel around the keyboard’s base, which is not the most pleasant.

Dell stands out from its competitors: Lenovo is smart and thin, and MSI is dark and dated. Dell’s build quality is also impressive – just enough to carry around in your bag.

A Dell machine may look good, but it’s not thin or light. It weighs 2.44kg, and its body is 26.9mm thick, and its massive rear means it is also 273mm deep. This makes it bigger than both rivals, though not by much. MSI is smaller than Dell and Lenovo. 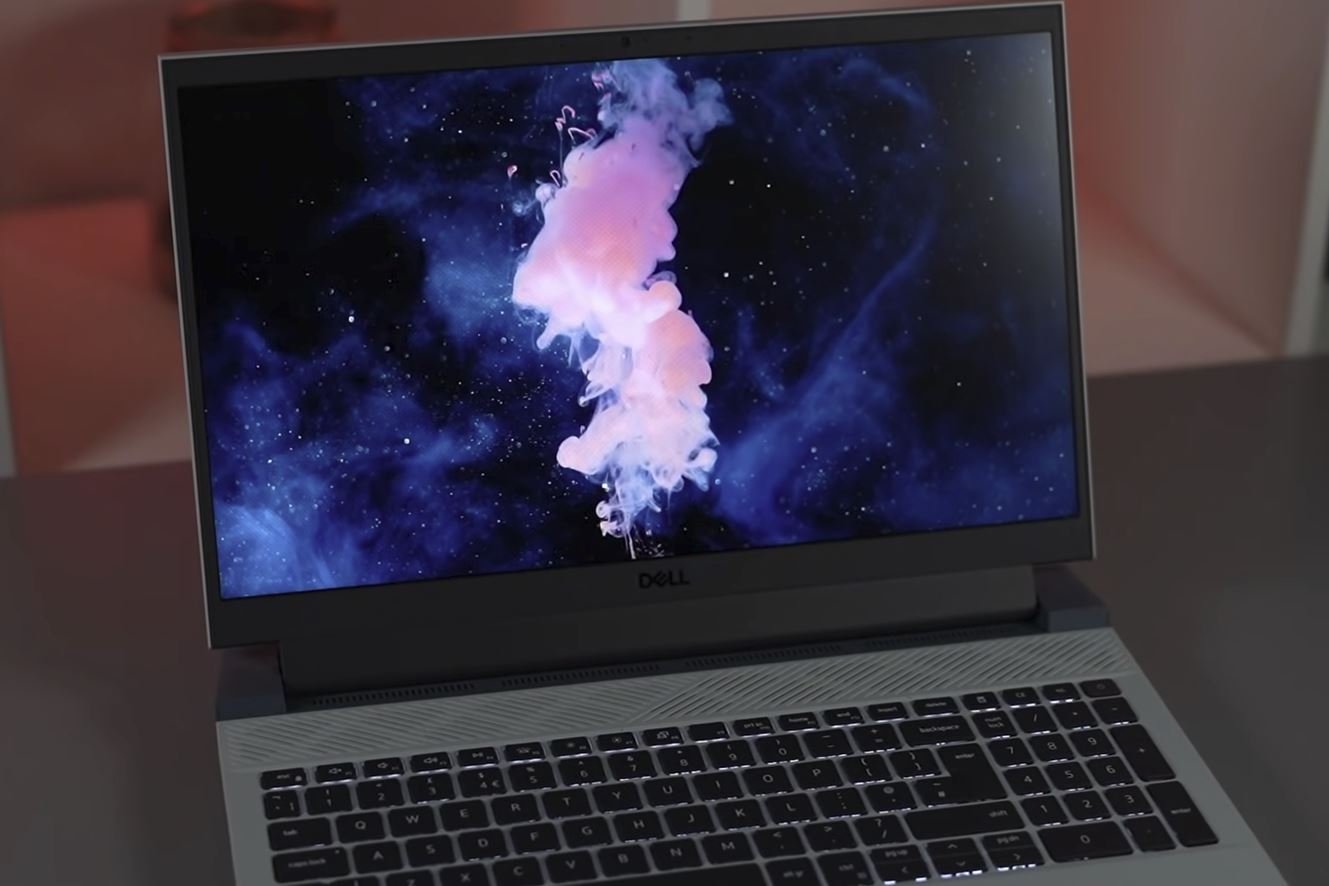 The maximum display brightness reaches 300 cd / m2; the contrast ratio is 770: 1, which we consider being modest results, due to which the colorfulness and depth of the picture suffer in many games. If the brightness is set to 99% or lower, PWM appears, which can be not good for the user’s sensitive eyes. The screen covers 55% sRGB and 40% AdobeRGB, so we do not recommend this laptop for creating and processing media content.

The best display quality is its contrast. The 0.19-nit black point is low and contributes to a 1300: 1 contrast ratio. This is excellent for an IPS panel, which means images have more depth and brightness. The 6352K color temperature is good; the images are not oversaturated or pale.

However, the Delta E of 4.88 is mediocre, and the G15 only displays 59.6% of the sRGB color gamut. So while this panel is deep and vibrant, it doesn’t display a particularly wide range of colors.

These are not disruptive results, but Dell doesn’t make the best games – the more colorful games suffer. You can play regular games on this panel without any problem, and none of the opponents are better. Ultimately, you will have to spend more to achieve a significant quality improvement.

Dell G15 5515 runs on Windows 10 Home 64-bit operating system. The AMD Ryzen 7 5800H processor has 8 cores and overclocks in the 3.2-4.4 GHz range. It is made according to the standards of the 7-nm process technology, has 16 MB of the cache memory of the third level, and the chip’s thermal package is 45 watts.

The integrated AMD Radeon RX Vega 8 graphics card runs at 2000 MHz. It is good for everyday work, and for more complex tasks, there are discrete NVIDIA GeForce RTX 3050 graphics with 4 GB of GDDR6 memory. Playing at maximum settings is unlikely to work: for example, F1 2021 will show 90 fps, and Cyberpunk 2077 – 30 fps, so in the case of this game, it is better to lower the bar to medium or even low settings.

In practice, the system works smoothly and quickly, offering more than sufficient power for all the usual fields of application even if it is noticeably behind the few models on our test bench, all of which are very efficient. 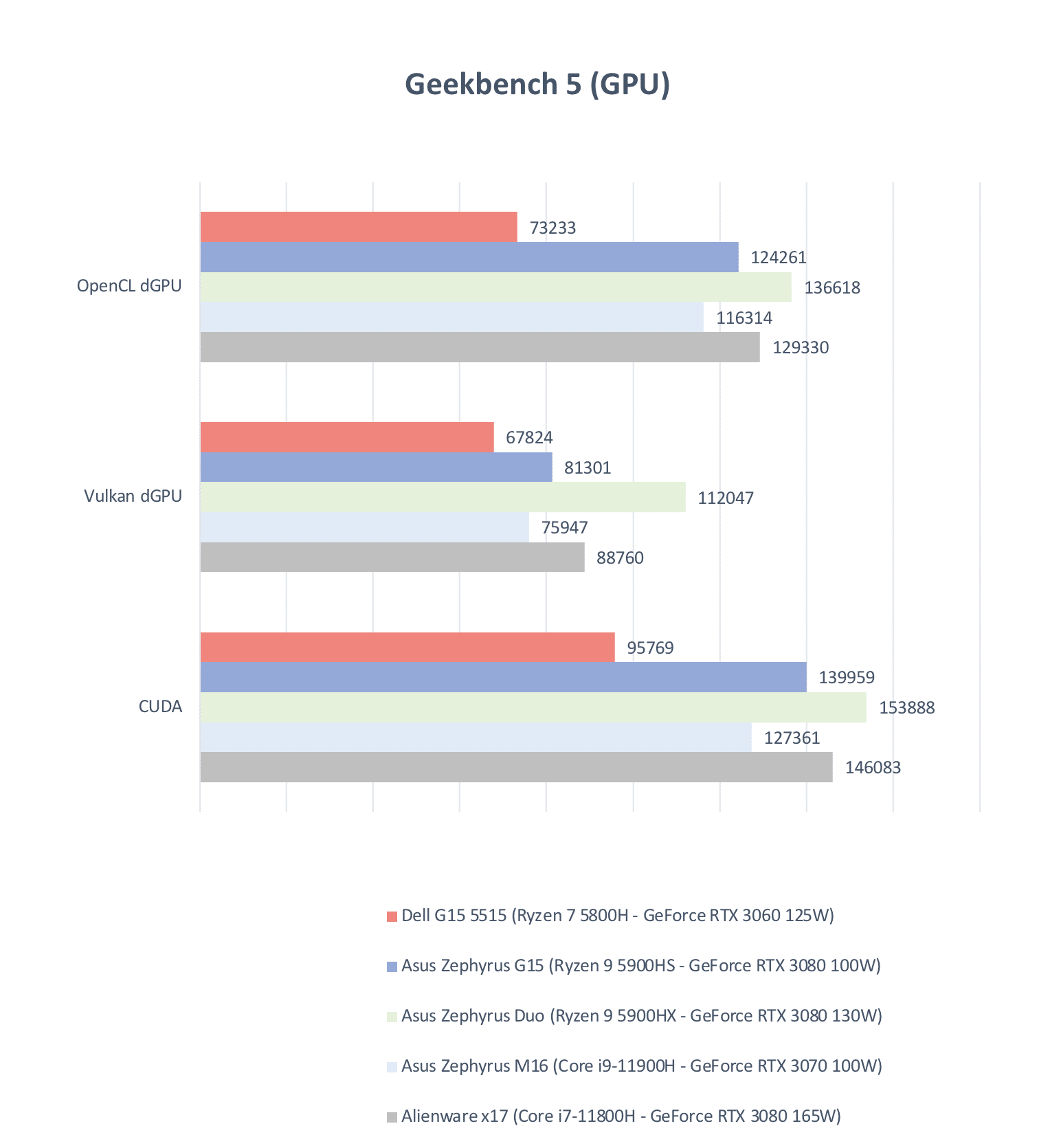 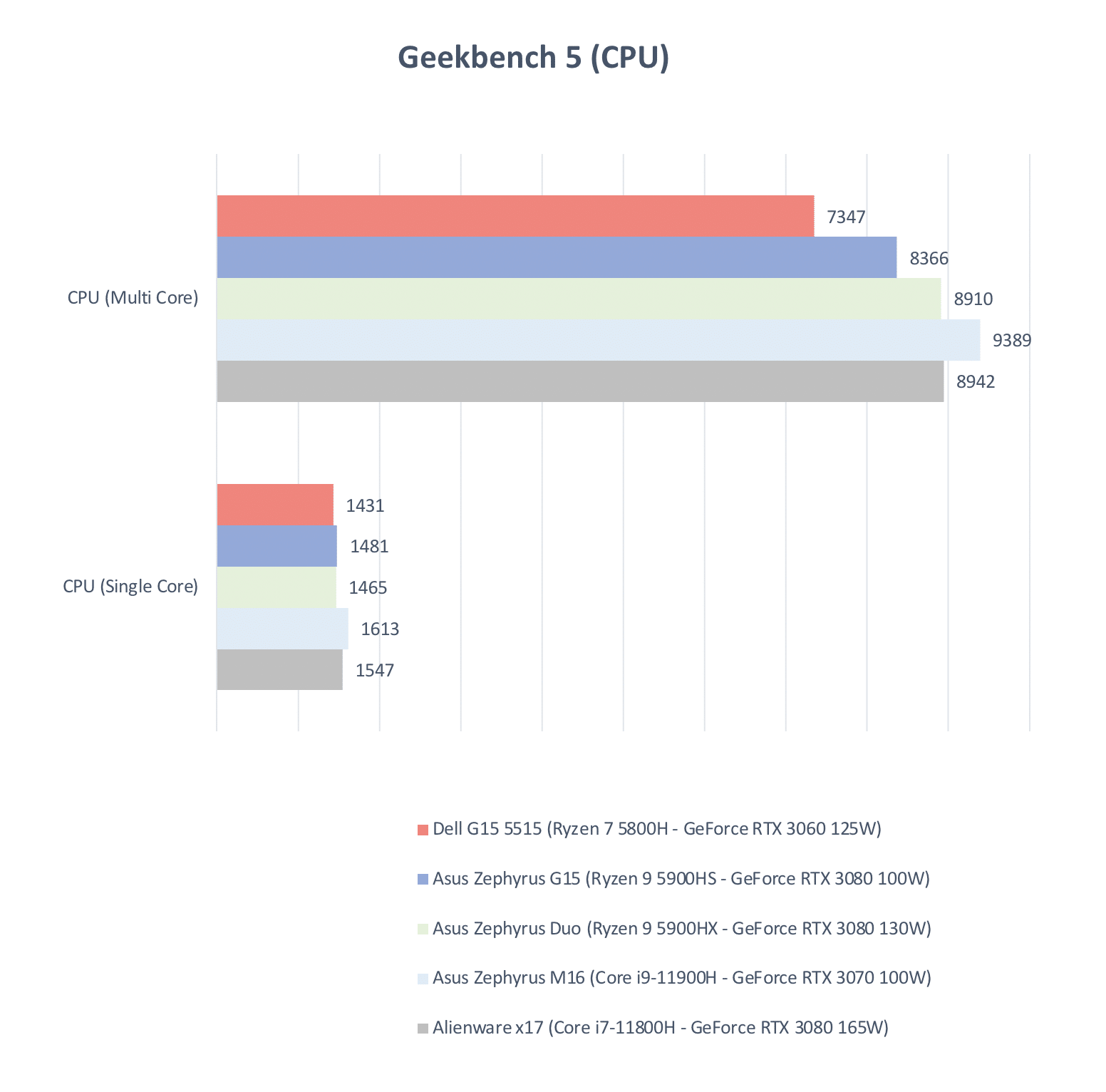 On the graphics card side, with its RTX 3060 with a 125W TGP, the Dell G15 has a solid base for a mid-range gaming laptop. In practice, this allows it to grab a dozen FPS compared to versions equipped with the same card but limited to 85-90W for various reasons (such as the Acer Nitro, for example). Sufficient to play the latest AAAs in Full HD around 60-70 FPS but still a bit tight to take advantage of Ray-Tracing even with DLSS active. Better to opt for an RTX 3070 with this in mind.

Dell has mediocre connectivity to its hefty chassis. It has one USB 3.2 Gen 1 port and a USB-C connector that supports DisplayPort, but two additional full-size USB ports use the slower USB 2.0 standard, and it also lacks a card reader and Windows Hello support on the webcam. There’s dual-band Wi-Fi, Bluetooth, and Gigabit Ethernet on the inside, and that’s okay. Lenovo is much better for connectivity: it’s littered with faster USB ports. 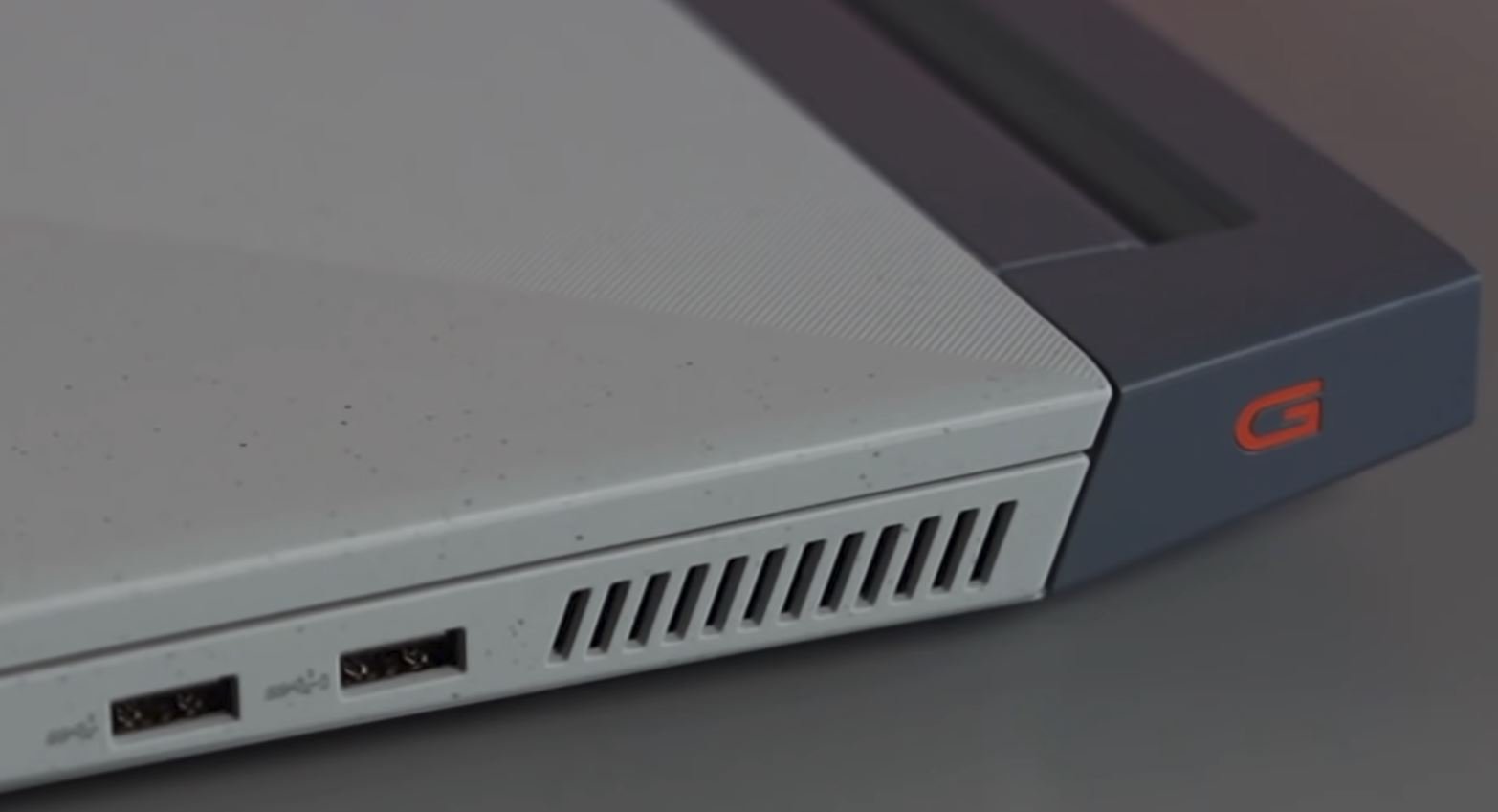 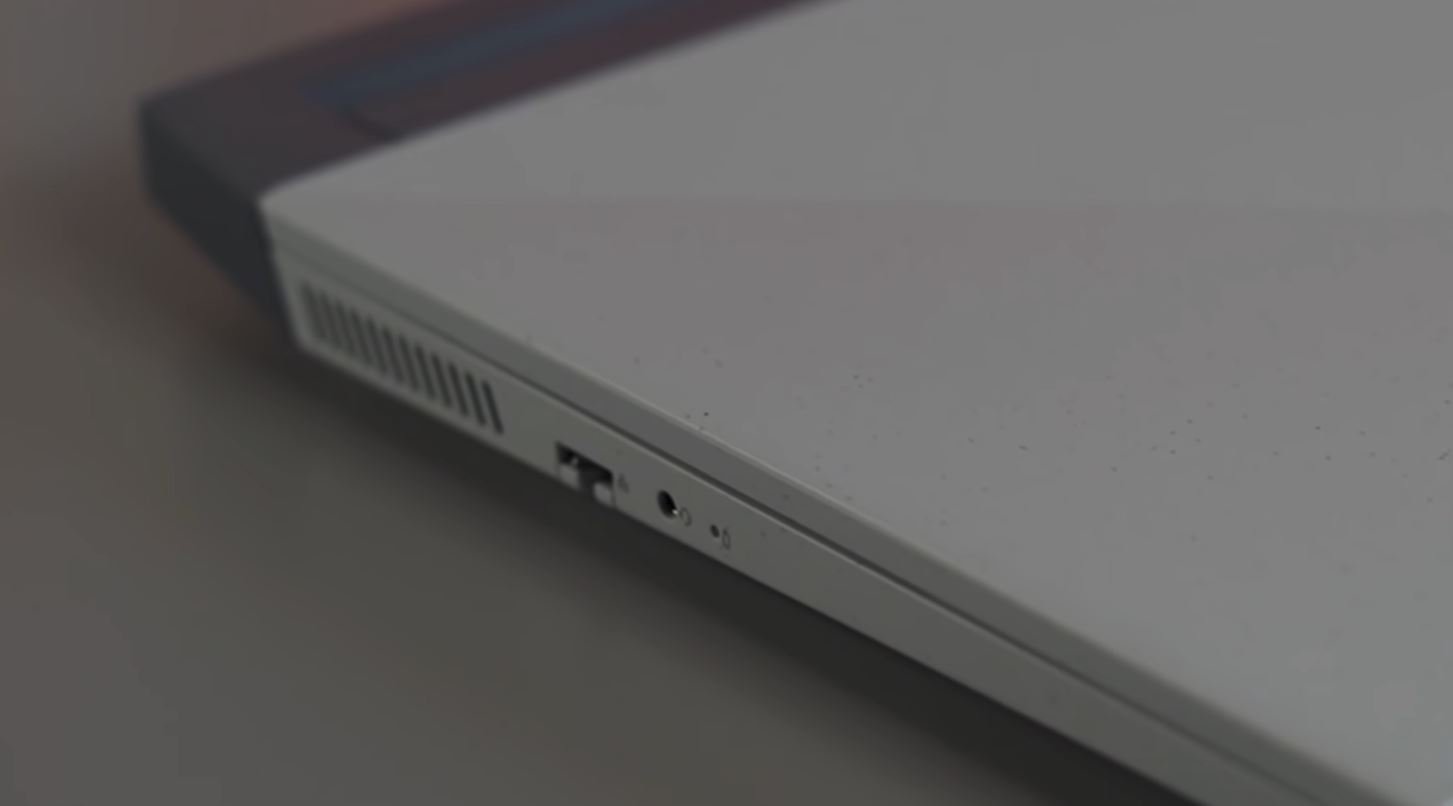 The audio experience provided by this Dell G15 will not go down in history, but it should come as no surprise. Few manufacturers make efforts in this area on laptops in general in these prices. Positioned on each side under the PC, the speakers will impact the support on which you place the PC, but whatever it is, the rendering is hollow, lacks depth, and has not done justice to our playlist. The volume is good, though.

The speakers sound loud and clear, but no bass. So if you want to immerse yourself in the gameplay, we recommend using headphones. The webcam has a standard 720p resolution, suitable for periodic video calls and streaming without the pretense of picture quality.

Dell resists with its keyboard. The layout is good, with a double-height return key and a number pad. Picks up sharpness and speed, and the solid laptop base gives the G15 a pleasantly solid feel. The keyboard is perfect for gaming and is as enjoyable as a Lenovo device. 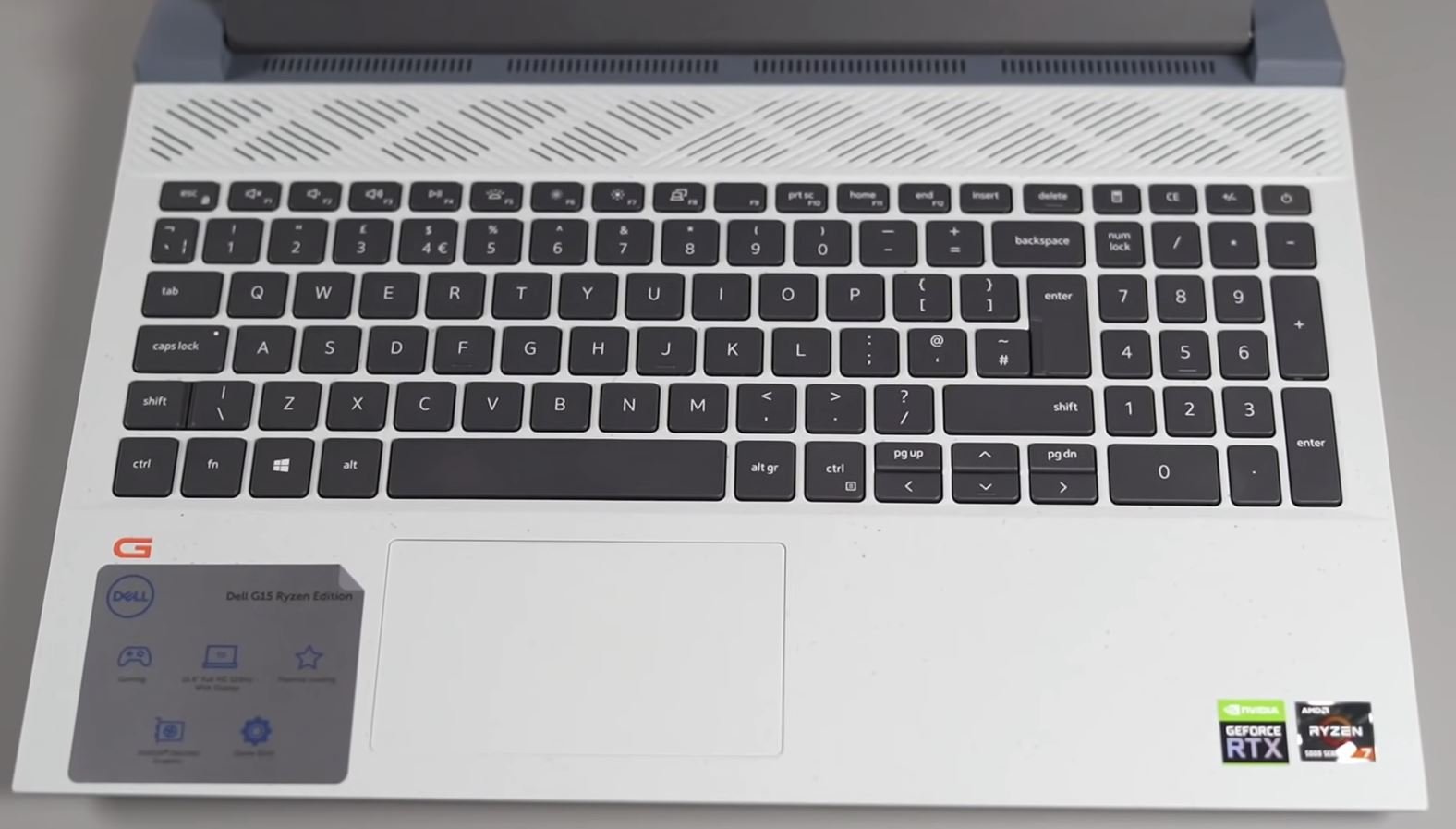 The keyboard lacks RGB LED backlighting, which is disappointing, and the trackpad is underwhelming: it’s small and squishy. A USB mouse is essential to play well.

For gaming, on the other hand, we have already seen more effective. The keys are quite large (1.5 cm x 1.4 cm) and sufficiently spaced even if some, such as the “Enter” key, have caused some errors. A Caps Lock indicator is present on the appropriate key.

The touchpad is in the same vein with a surface that seems cramped (10.5 cm x 6 cm) but enough to navigate fairly freely with the right amount of responsiveness and precision. The glide is good as long as you don’t have sweaty fingers.

The device is equipped with a 3-cell, 56 Wh Li-ion battery. The autonomy results are as follows: in web surfing mode, the laptop works for 8 hours, when watching a video – 8.5 hours, in both cases, the screen brightness is about 150 cd / m2. The device will last 1.5 hours under maximum load.

The chassis stays cool to the touch during everyday use. If you launch a game or other heavy application, the center of the keyboard and the top get noticeably warm (up to 50 degrees). The palm area is cool in all scenarios.

That’s sensational durability for a laptop with this level of hardware, and it adds to the versatility – if you want to use the G15 for work, you’ll easily get through the day unless you’re pushing the components. None of the rivals coped with it.

In games, Dell ran for 1 hour and 48 minutes. This result is not terrible and better than both competitors, but it is much more common and completely unsurprising for a gaming laptop. If you’re not happy with fast gaming sessions, you’ll need to stay connected to play the latest games properly.

The bottom line is that the Dell G15 5515 is a decently priced device suitable for many games. The packing is based on the AMD Ryzen 7 chip and NVIDIA GeForce RTX 3050 graphics – although not all modern games will run at maximum settings, at medium or high – most. The laptop looks good; it comes with a 15.6-inch Full HD screen, a backlit keyboard, fairly quiet fans, and a large battery that lasts a full day.

There were some drawbacks. So, the screen of the device was disappointed:

In addition, the set of interfaces is rather sad: in particular, a few outdated USB 2.0 instead of modern USB Type-C and Thunderbolt.

Rivals offer a lot of speed, and Dell’s 120Hz display isn’t particularly impressive. This is also not a very thin and light laptop.