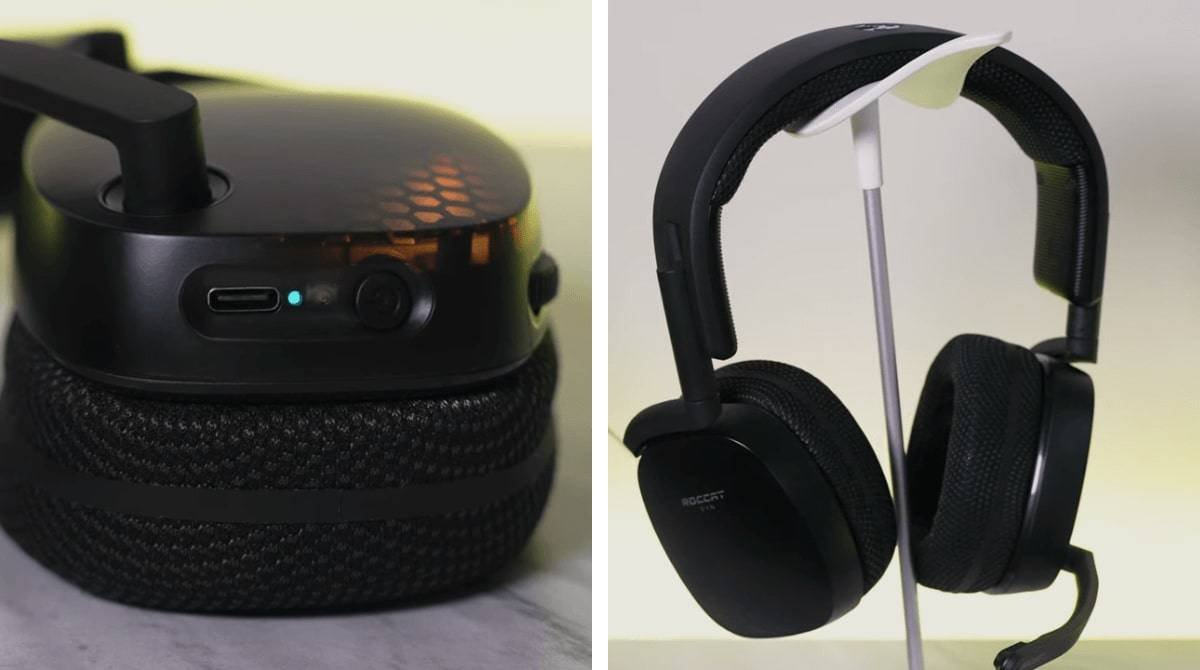 The time has come to check the strongest representative of gaming headphones in the company’s portfolio. Roccat Syn Pro Air promises the highest quality combined with unprecedented comfort. But what is the reality?

In the case of the Elo 7.1 Air, the overall experience was positive. Particularly noteworthy were the excellent working times on a single charge, as well as the overall comfort of use – even in the case of glasses.

Thoroughly analyzing the specification provided by the manufacturer, there are no significant deficiencies. The sales box is complete. I always like to pay attention to the length of the charging cable, and yes, with the kit in question, it is more than correct. A two-meter cable should work in every scenario, and the addition of a USB-C adapter can save you in a crisis. 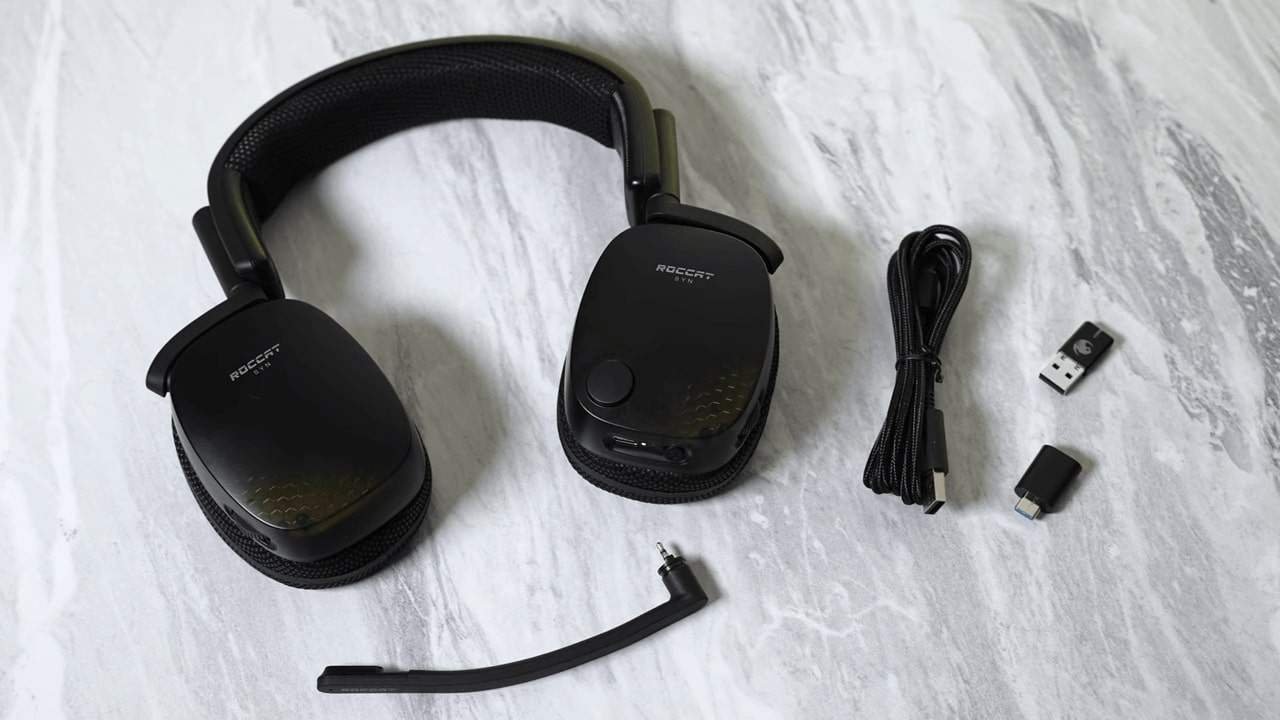 Roccat Syn Pro Air is a closed over-ear design. The sound transfer takes place only after connecting the USB-A transmitter to our device. A novelty in the most expensive model is cooperation with the PS5, but it is limited. The manufacturer warns that the volume controls may not function. I tested the headphones in conjunction with a laptop running Windows 10.

The Roccat Syn Pro Air is available only in a black, matte color version, making the design itself even calmer. There is no question of any aggressive style here. 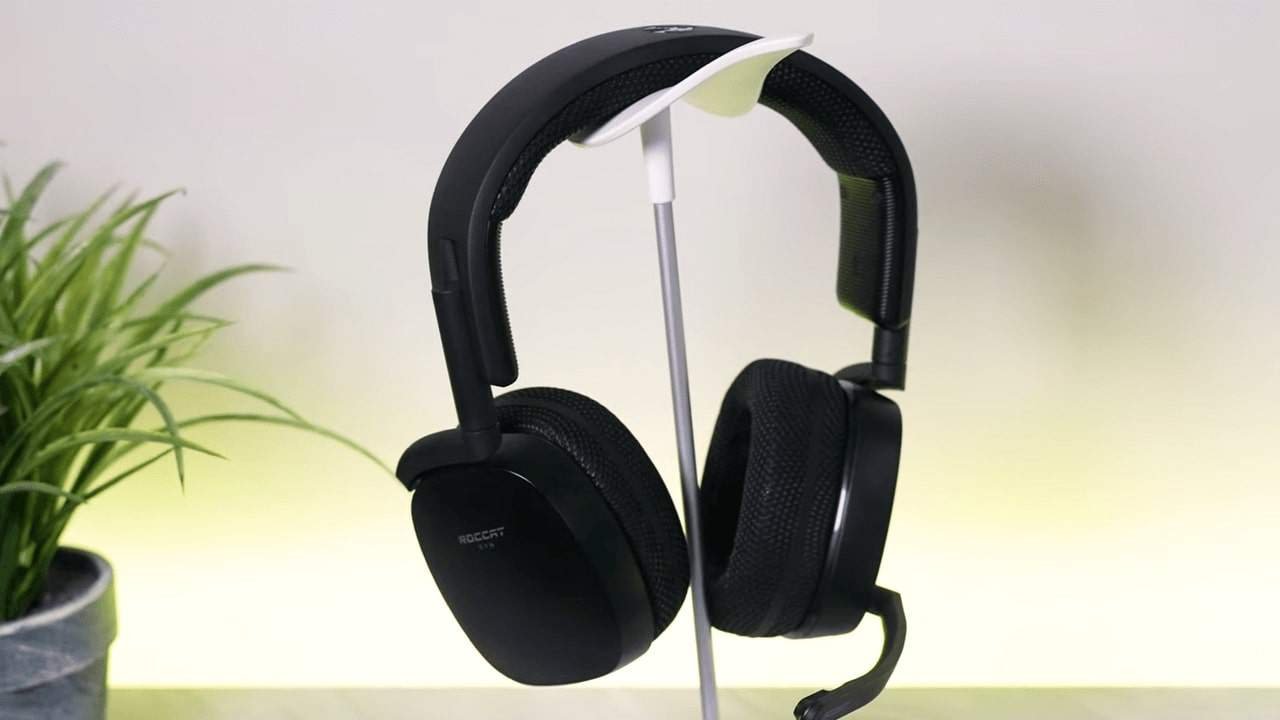 The whole structure is made of plastic, thanks to which the device can boast a relatively low weight of 390 grams. In fact, even a few hours with headphones on the ears did not cause much discomfort, maybe apart from the heat. Still, it is inevitable, considering the specificity of closed, over-ear headphones and the fact that the outside temperatures have recently reached +30 degrees Celsius. 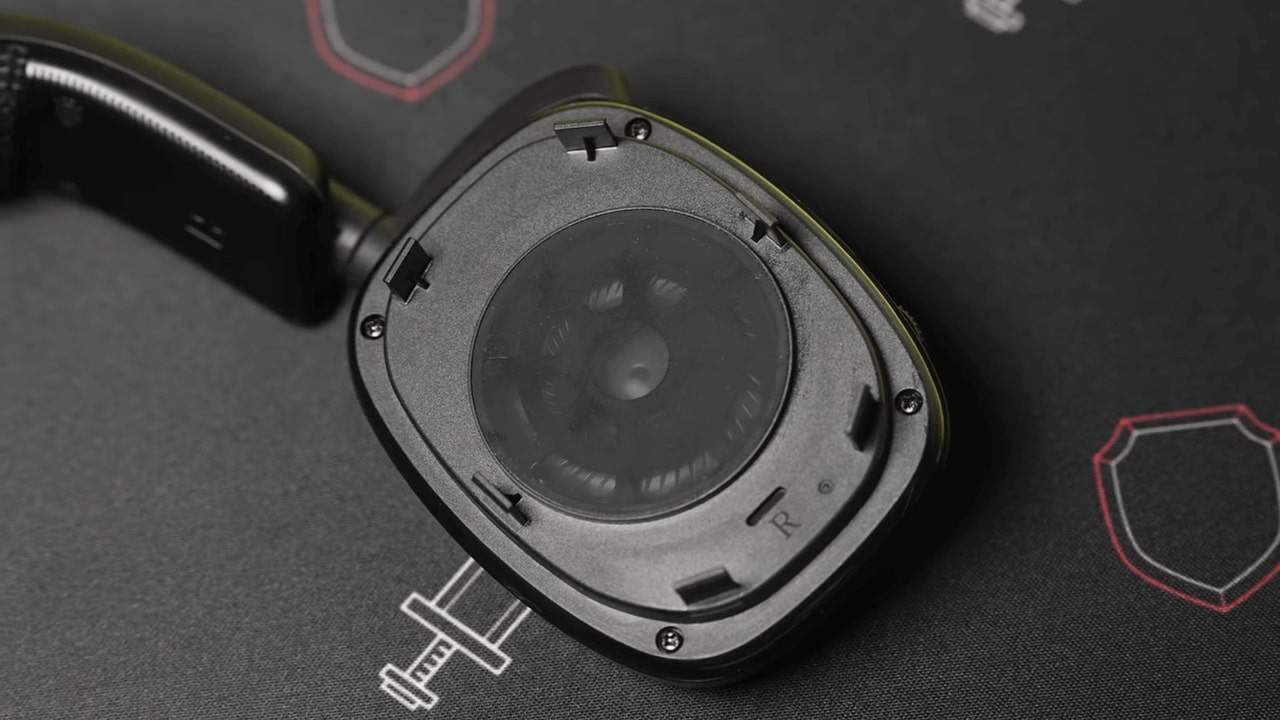 While black goes well with almost everything, and the matte finish does not collect fingerprints, the plastic itself can be quite easily scratched and rubbed, especially in the headband area. It is not something obvious, and it is definitely better than in the case of shiny constructions. Still, people allergic to the aesthetics of the equipment used (like me) can be quite easily irritated by subsequently collected blemishes.

Moving on to the earpieces themselves, they have the shape of rectangles with rounded edges this time. On both of them, we can find the manufacturer’s emblem “Roccat Syn” and a piece of transparent plastic with a grid pattern, under which there are RGB LEDs.

The buttons and knobs have been divided into left and right sides, which is nice facilitation. Recently Roccat had put everything on one earpiece, which made it fairly easy to get confused before the muscle memory began to recognize the correct hand position. 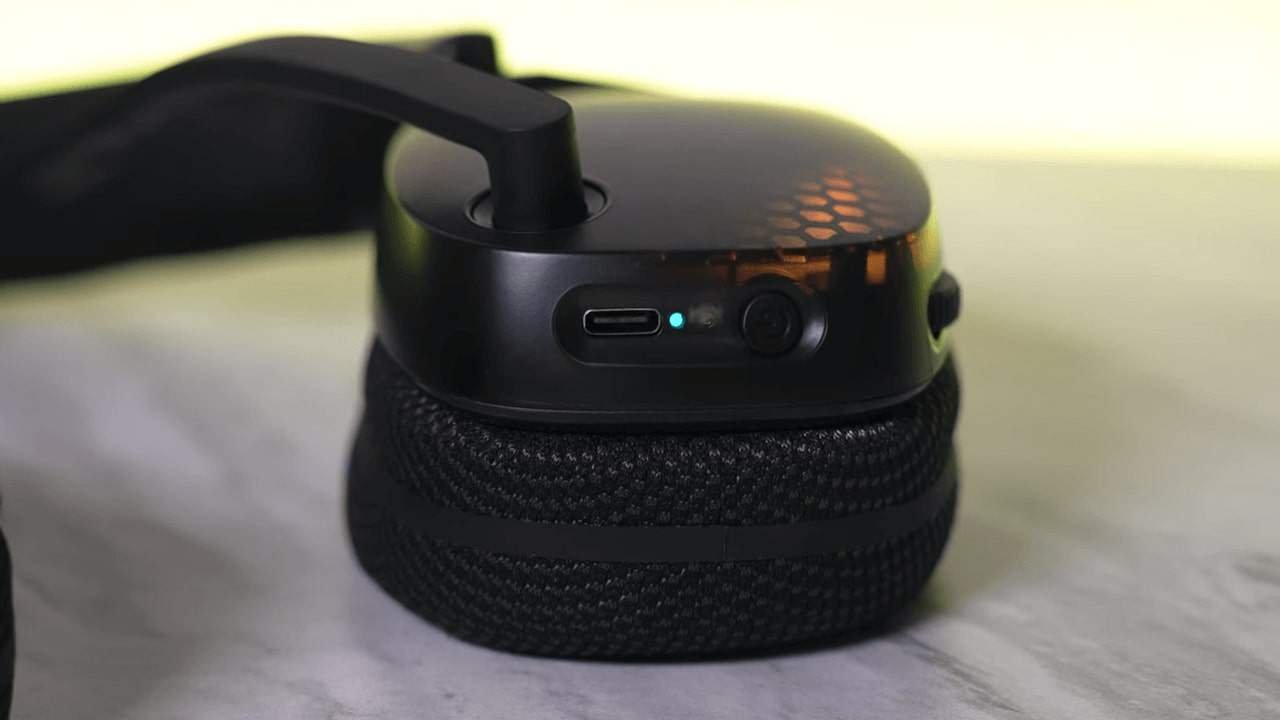 On the left earphone, at the bottom, we find a power button and a USB-C charging port in the groove. Next to it, there is also a place for a tiny LED that shows the connection status of the headphones. There is a place for a knob with a delightful stroke on the back, which is responsible for the sound volume sent from our computer. One shift reduces or increases the system’s intensity by 4 units. 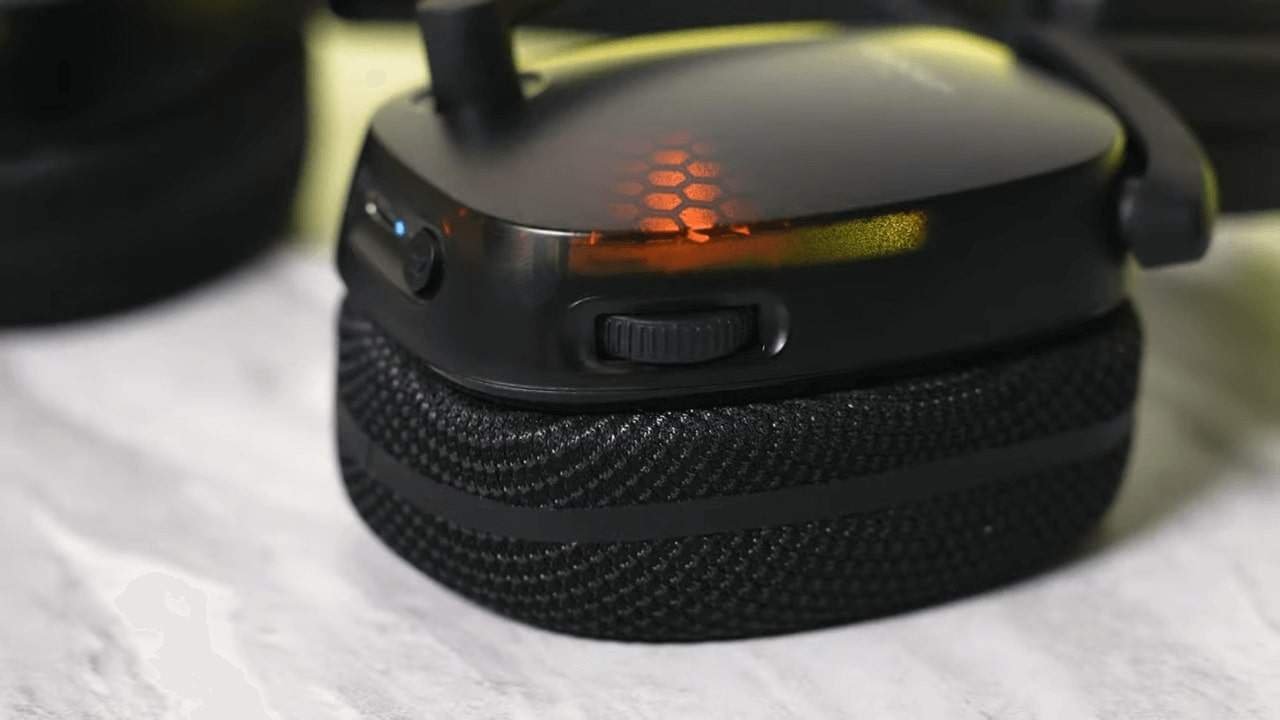 There is a second, identical knob on the right earphone. This is responsible for the volume of our interlocutors. Each of us has certainly encountered a situation where the sound from the game or music drowned out our companions, so the presence of such a solution should be appreciated. 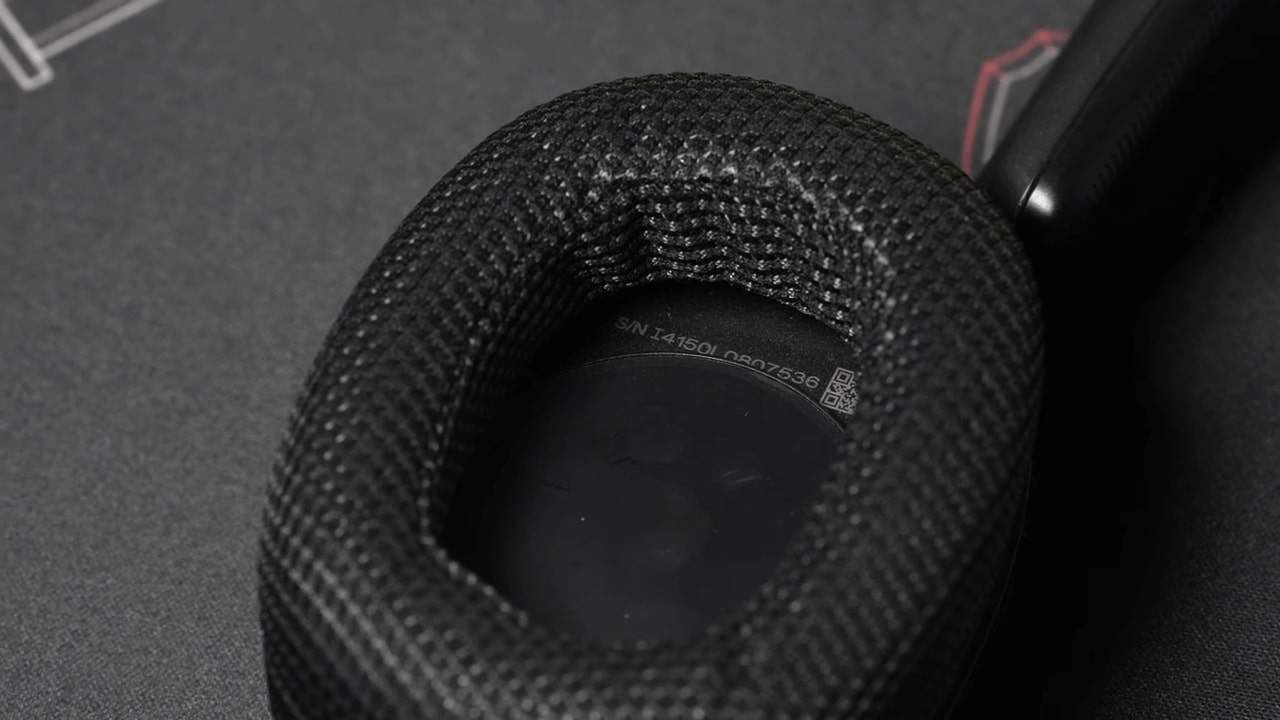 Just like the Roccat Elo Air 7.1, the Syn Pro Air uses memory foam technology, which quickly adapts to our head and the glasses we are wearing at the moment. Roccat figured out this aspect really well. The situation is similar in the case of a flexible headband, which, thanks to a large range of adjustments, always allows you to find a position in which the presence of headphones on your head will not be disturbing.

As for the microphone, the place to attach it is on the left earphone, a rather unfortunate solution is to cover it. The microphone itself plugs into the headphones without much problem, and the rubber housing allows you to adjust the distance from your mouth.

Interestingly, the microphone can be tilted to three defined positions, where two of them block its operation. If the transmitter is close to our eyesight, then we can also look at its LED. When the microphone is turned off – it flashes red. If it is active – the LED is constantly white.

Roccat Syn Pro Air is an excellent piece of equipment. It is difficult to have bigger reservations, apart from the plug for attaching the microphone. The design does not creak, does not bend under pressure, and the weight is so well distributed that the weight of the set does not bother you. The memory foam with the shape memory effect and the adaptable headband make the comfort of using the equipment truly top. Matte black plastic looks elegant and does not get too dirty.

Appearance is a subjective opinion, and everyone may have different feelings. Even the optional RGB lighting seems to have a rather relaxed dimension due to its simple pattern rather than fancy graphics. It seems to me that the device’s design should appeal to a wide audience, not only the gaming audience.

A big innovation in the Roccat Syn Pro Air model is the completely new software responsible for controlling the functions of the headphones. If anyone remembers the review of Elo 7.1 Air, they also know that one of the problems was the poor application, which not only had numerous translation errors but also was often very unstable.

The new Syn Pro Air companion app is called Roccat Neon. Before downloading the program, the website warns us that we are dealing with a beta version at this stage.

After installing the app on the computer (it takes up about 340 MB together with the drivers) and connecting the adapter to a free USB-A port, we are asked to download an update each time, which is actually a module responsible for controlling specific equipment. Interestingly, the application currently supports only the Syn Pro Air model, and other equipment from the manufacturer’s portfolio, including keyboards, mice, and other headphones (such as Elo Air 7.1 ), are to receive this support “soon.” Probably, after some time, the Polish version of the application will also appear, but at the moment, we have to limit ourselves to the English language. 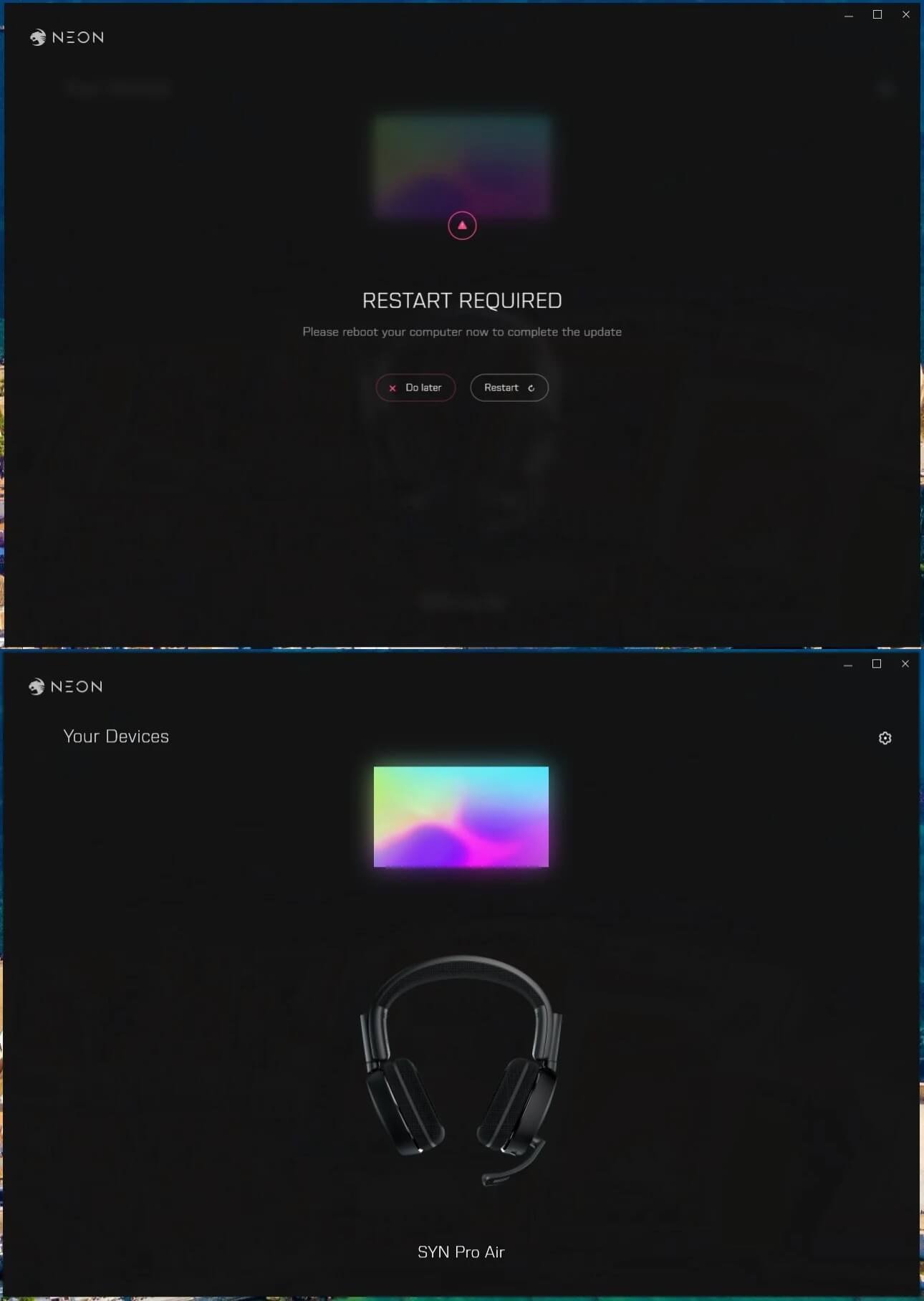 The process of connecting the device for the first time takes a short time. There is no special philosophy here. After downloading the mentioned module, the software is ready for use. What catches the eye from the very beginning is a much simpler and much cleaner interface.

After selecting our headphones, we gain access to three tabs. They are Options, Backlight, and Equalizer. We can check the battery level from the first tab, manipulate the listening balance, or turn on dedicated sound modes, including “3D Audio”.

The backlight allows us to control the built-in RGB LEDs without a big surprise. In terms of effects, we get the classic option of selecting a specific color for a designated area, pulsing in all available colors, or Roccat’s proprietary solution, i.e., “AIMO,” which adjusts the displayed colors within all the company’s equipment.

The equalizer does not require much comment. It is present in the application and does what it is supposed to do, so it allows you to raise or suppress certain frequencies of the sound being played. When enabled, it works globally across the entire device to which it is connected. It is enough for the Neon application to be running in the background, set by default.

When it comes to the microphone, also Roccat Syn Pro Air does not disappoint in this topic. The audio recording quality is excellent, and the applied noise-canceling algorithms do what they are supposed to do. The device does not collect from the environment what should not. On hot days, the windmill directed at me did not scare my companions during conversations.

Moving on to the battery, Roccat promises 24 hours of battery life on a single charge, similar to the Elo 7.1 Air, and in fact, the Syn Pro Air set times similar to those given by the manufacturer. Of course, you have to bear in mind that this can be influenced by various factors, such as the brightness of the lighting or the volume of the music being listened to.

The producer also boasts that just 15 minutes of charging should be enough for about 5 hours of gameplay.

It is worth noting that in this case, Roccat continues its strong series when it comes to running its devices on a single charge. If you care about long work, the Syn Pro Air should satisfy even the most demanding users.

The manufacturer did the homework. Virtually all the predecessor’s shortcomings have been eliminated, the strong points are maintained or improved, and we are dealing with a product by adding a universal design.

The incredibly comfortable design meant that it does not feel discomfort even during long sessions during work or playing with friends. The pure sound quality and the 3D Audio module ensured an enjoyable experience in every scenario.