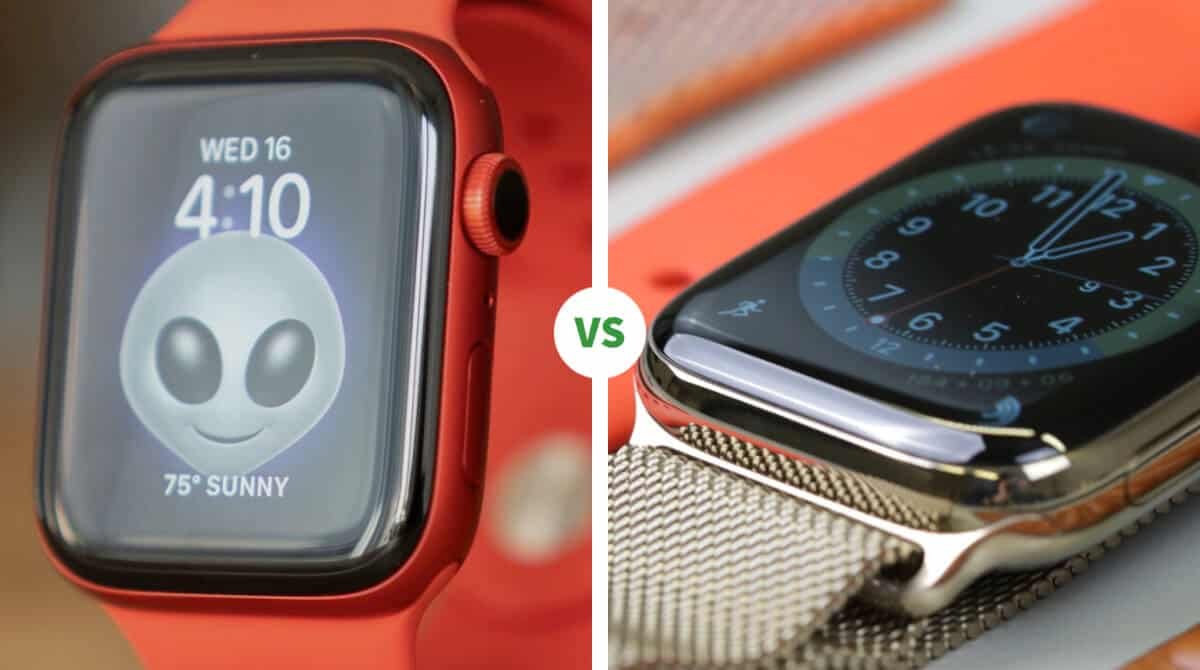 Apple has unveiled its latest connected watch, and it’s time for us to go back in detail on all the changes made by the manufacturer.

This Tuesday, September 14, Apple gave us an appointment for its traditional back-to-school keynote, and as usual now, a new Apple Watch Series 7 was unveiled in the eyes of the world. Unfortunately, this new connected watch will not be available immediately. Fans will have to cheat their brains since Apple has only communicated a wave “later this fall” as a window of availability.

We expected an Apple Watch with flat edges, closer to the iPhone 13 or even the iPad Air; it won’t be this time. Apple keeps these rounded edges but put on slightly more rounded edges for this Series 7 than the previous version. This is not necessarily visible on the renderings published by the brand, but if you take a few seconds, you can notice the difference.

The five new colors, namely PRODUCT (RED), a new shade of blue lighter than the previous one, Green, Midnight and Starlight, which corresponds to a cross between silver and gold. 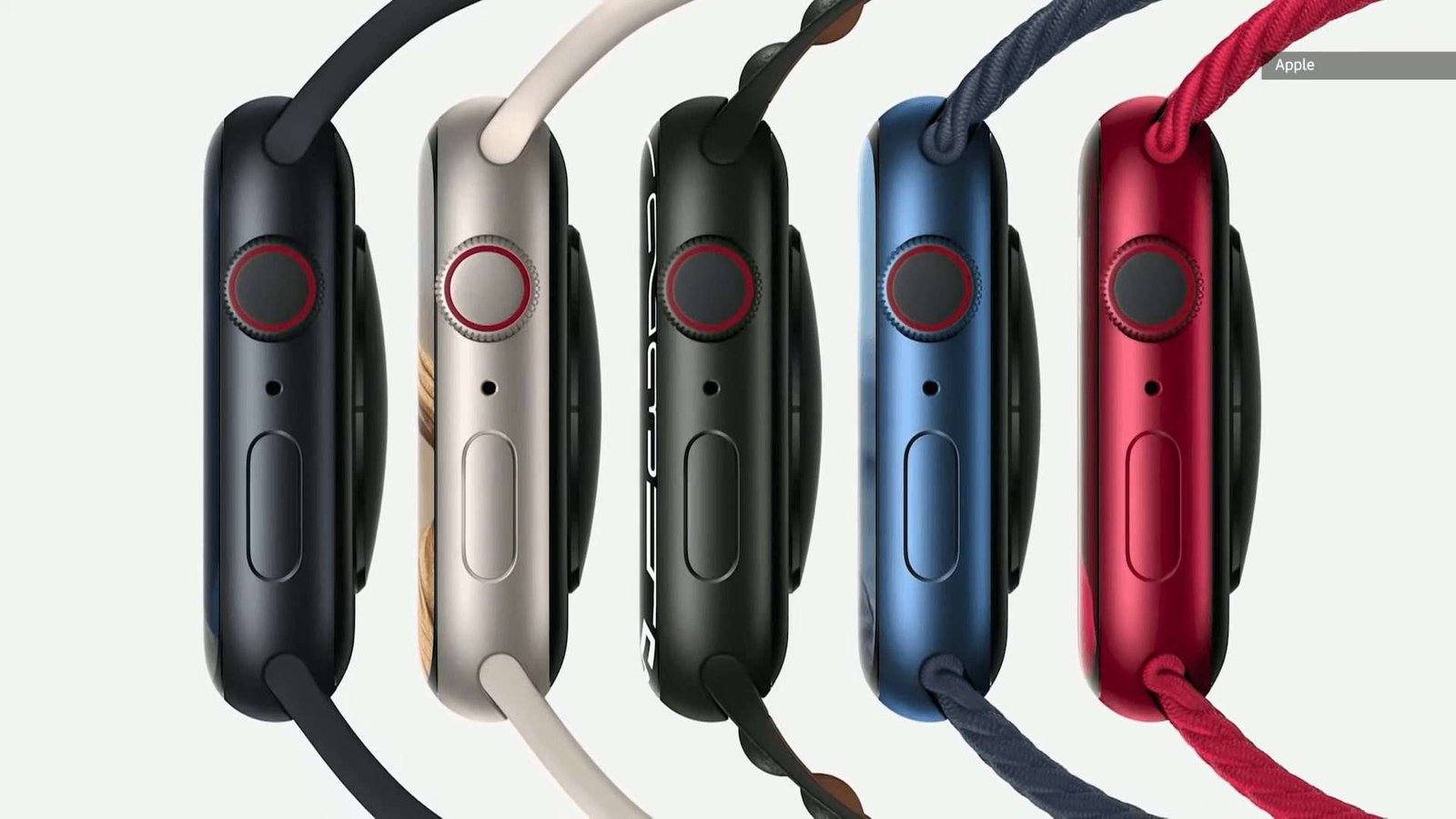 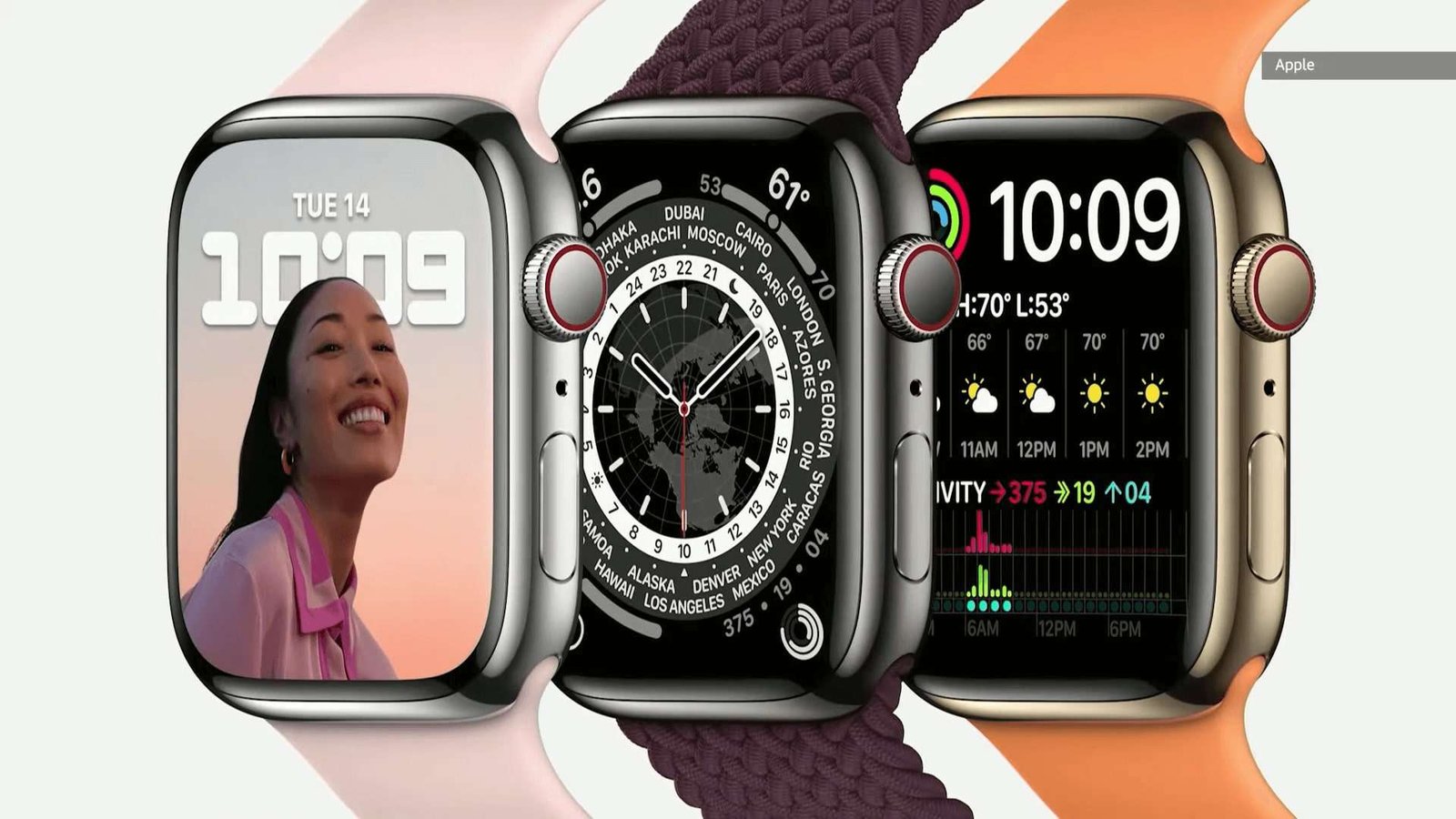 The absolute change of this Apple Watch Series 7 remains its screen, which gains in display surface with new sizes of 41 and 45 mm against 40 and 44 mm previously. 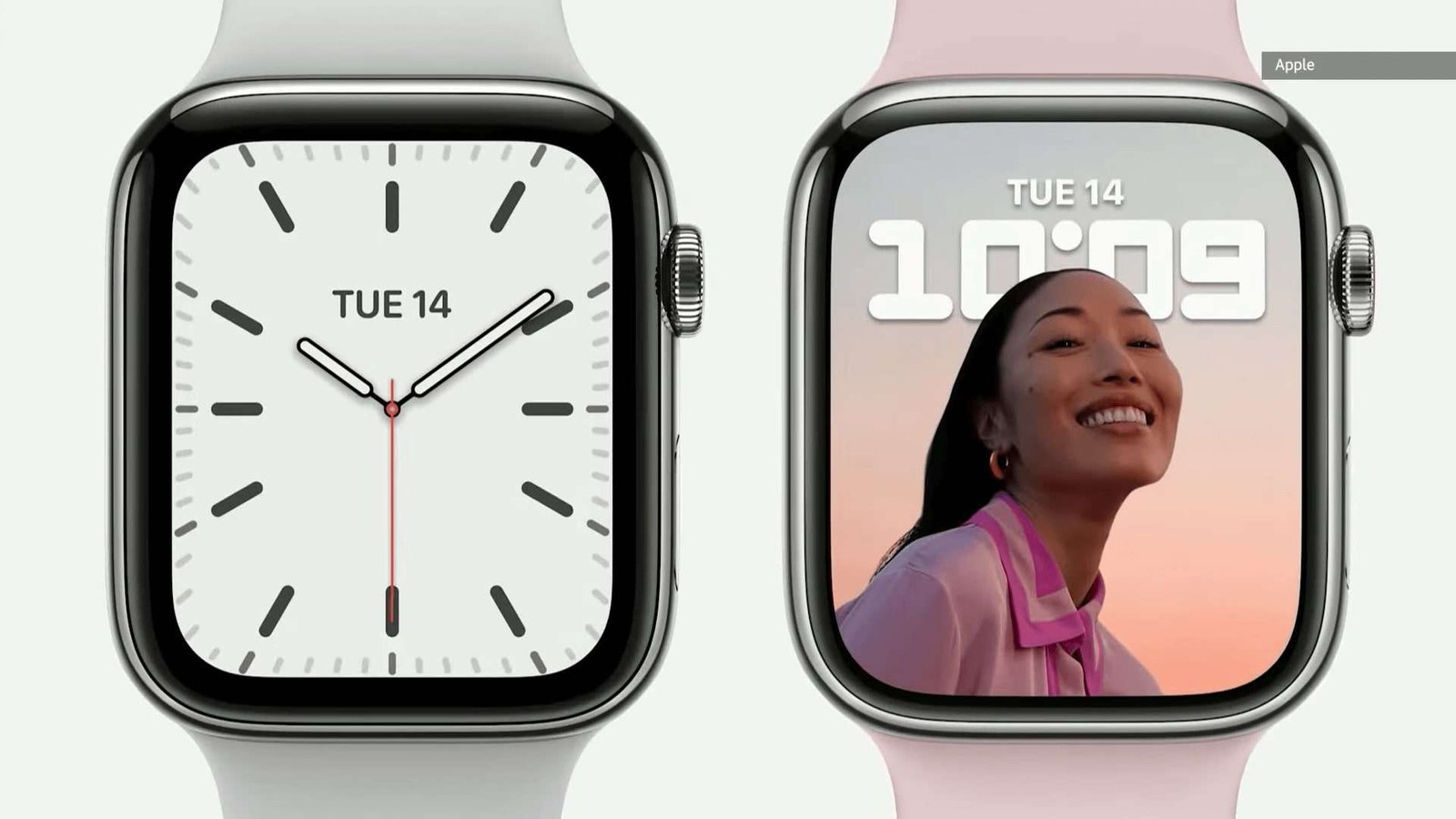 Apple indicates that the dimensions of the case remain the same, so the manufacturer had to cut back on the edges, which now measure only 1.7 mm on the Series 7, a decrease of 40% compared to the Series 6. 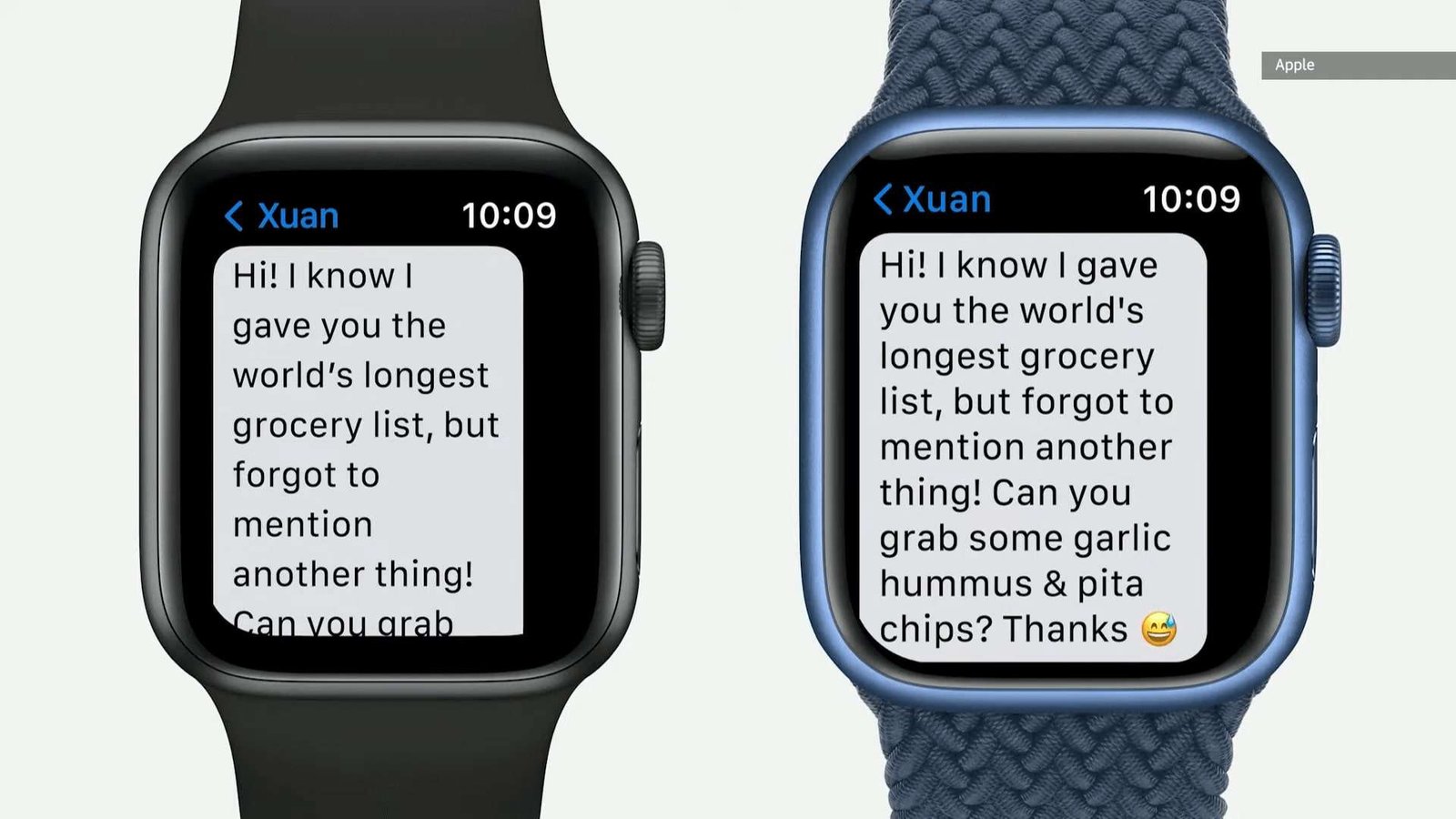 The display area is 20% larger than Apple’s previous connected watch. To take full advantage of this larger screen, Apple will offer exclusive dials such as Contour, whose numbers are placed at the ends of the screen, which displays even more information. 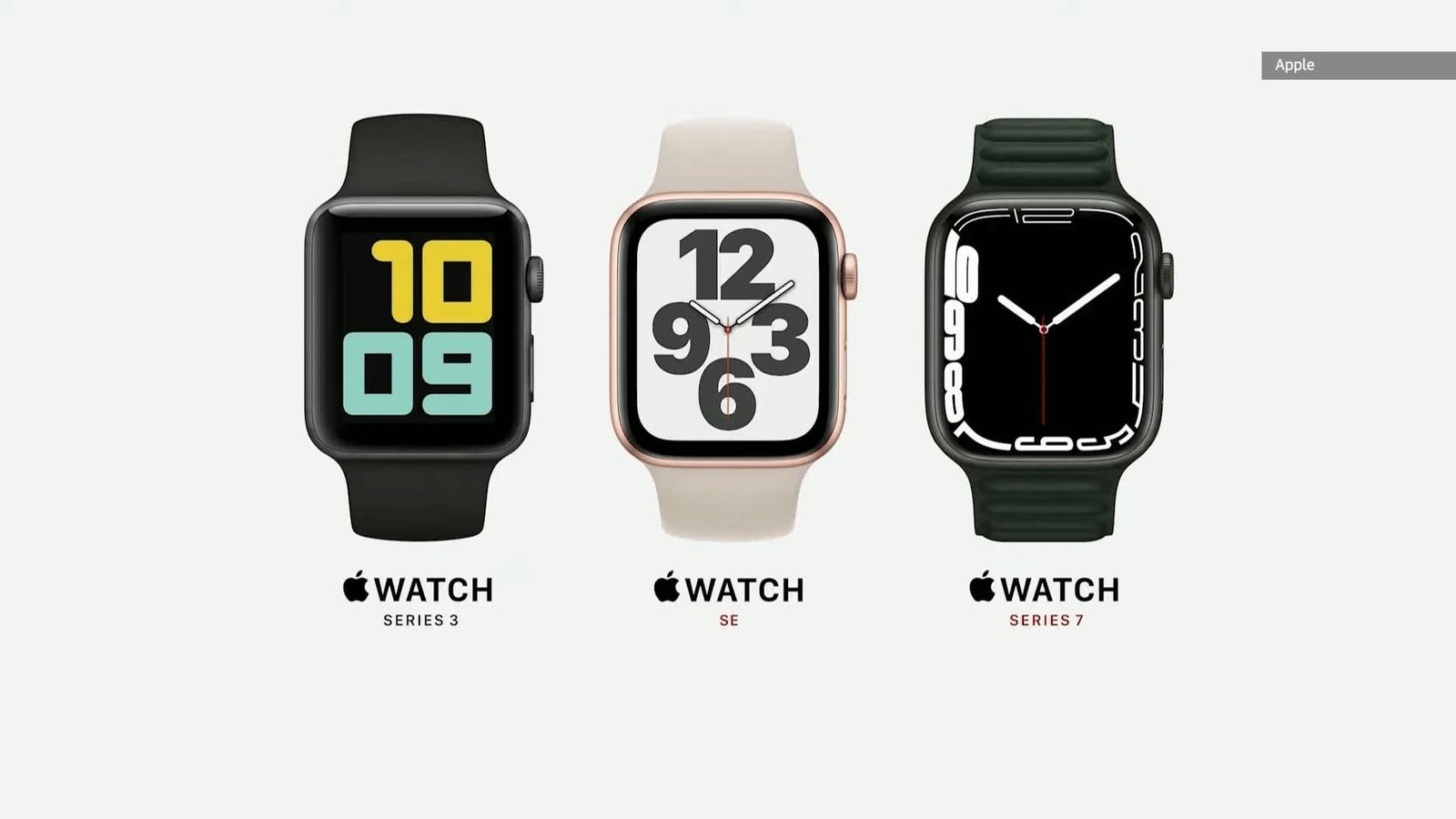 The manufacturer has also revised the interface with larger buttons, and therefore possibly easier to use. Likewise, more text on the screen can be displayed, which can be useful when receiving a long message that will require less continuous scrolling to reveal its content.

The Apple Watch Series 7 finally puts everything back with a reworked case. Apple did not disclose the dimensions of the watch.

Finally, Apple adds to its Series 7 a full keyboard to type messages faster on the wrist without going through Siri and his voice dictation with unexpected results.

Between the Series 6 and the Series 7, the technical differences are almost minimal, and Apple has, for once, not communicated on the processor that equips its new connected watch.

And for a good reason, since the brand is reusing the S6 SoC from the Apple Watch Series 6 for one more year. We should, therefore, not feel any particular performance gain during use.

The health sensors, which remain the same on Series 7. Therefore, there is a heart rate monitor for heart rate analysis and Sp02 sensors to measure blood oxygenation. The ECG is also still available from the digital crown, and the fall detection feature is still on the program.

Two models are available, Wi-Fi or Cellular, and again Apple has not indicated any modifications to the network chips used.

However, Apple has revised the recharge, announced as faster by 33% compared to the previous model. This is made possible by the new charging cable with the device, which now has a USB-C socket.

The brand also announces that 8 minutes of charging will be enough to get 8 hours of additional use in Sleep mode—something to please those stunned who forgot to charge their Apple Watch after the sun goes down.

Be careful; however, you will need to purchase a 20 W USB-C power adapter to take advantage of this recharge, which is not supplied with the connected watch.

After three years of ergonomic inaction, the Apple Watch Series 7 relies on a new design and screen to bring a pleasant breeze of fresh air. On the other hand, the lack of innovation inside the case naturally slows down our enthusiasm. So we come to our original question: in which cases is the purchase of the Apple Watch Series 7 recommended? Here are the different possibilities:

If you have an Apple Watch Series 4 or later, buying a Series 7 is only recommended if your watch’s battery life is down from its early days. Of course, the oximeter and the altimeter are missing in models 4 and 5. But if you do not use them, changing the watch will do you nothing more.

Switching from Watch SE to Watch Series 7 has several advantages. Bigger screen. More powerful platform. ECG, oximeter and altimeter. Apart from that, the Apple Watch SE offers the same services in terms of connectivity or use. If you choose the Watch SE, it provides a great experience at a low price. The Watch Series 7 remains on a higher budget.

If you have a Series 3 or earlier, you’ve got a pretty good return on your watch. And maybe it’s time to move on. The Watch Series 7 represents a good springboard towards modernity, with many new features in a few years: power, autonomy, use, screen, biometrics, everything goes. Of course, if 429 euros is a big budget, the Watch SE is also a good alternative… but less complete.

If you have a competing smartwatch and the Apple Watch is eyeing you, there are two questions you need to ask first. Do you have an iPhone? If the answer is no, go your way. If so, let’s continue discussing. Second question: Does your current watch have an ECG, oximeter and app store? If you can’t answer yes to two of its questions, the Apple Watch Series 7 is a good alternative. Otherwise, keep your model and come back in a year!

Are you entering the world of smartwatches? This is a great adventure that begins. Let’s start by answering a question: do you have an iPhone? If it’s negative, go your way. If that’s positive, the Apple Watch Series 7 is the best at Apple today. However, you should only favour it if health is one of your main concerns. Concerning the Watch SE, the price difference of the Series 7, more expensive by 150 USD, is only justified by the biometric sensors (and its larger screen).