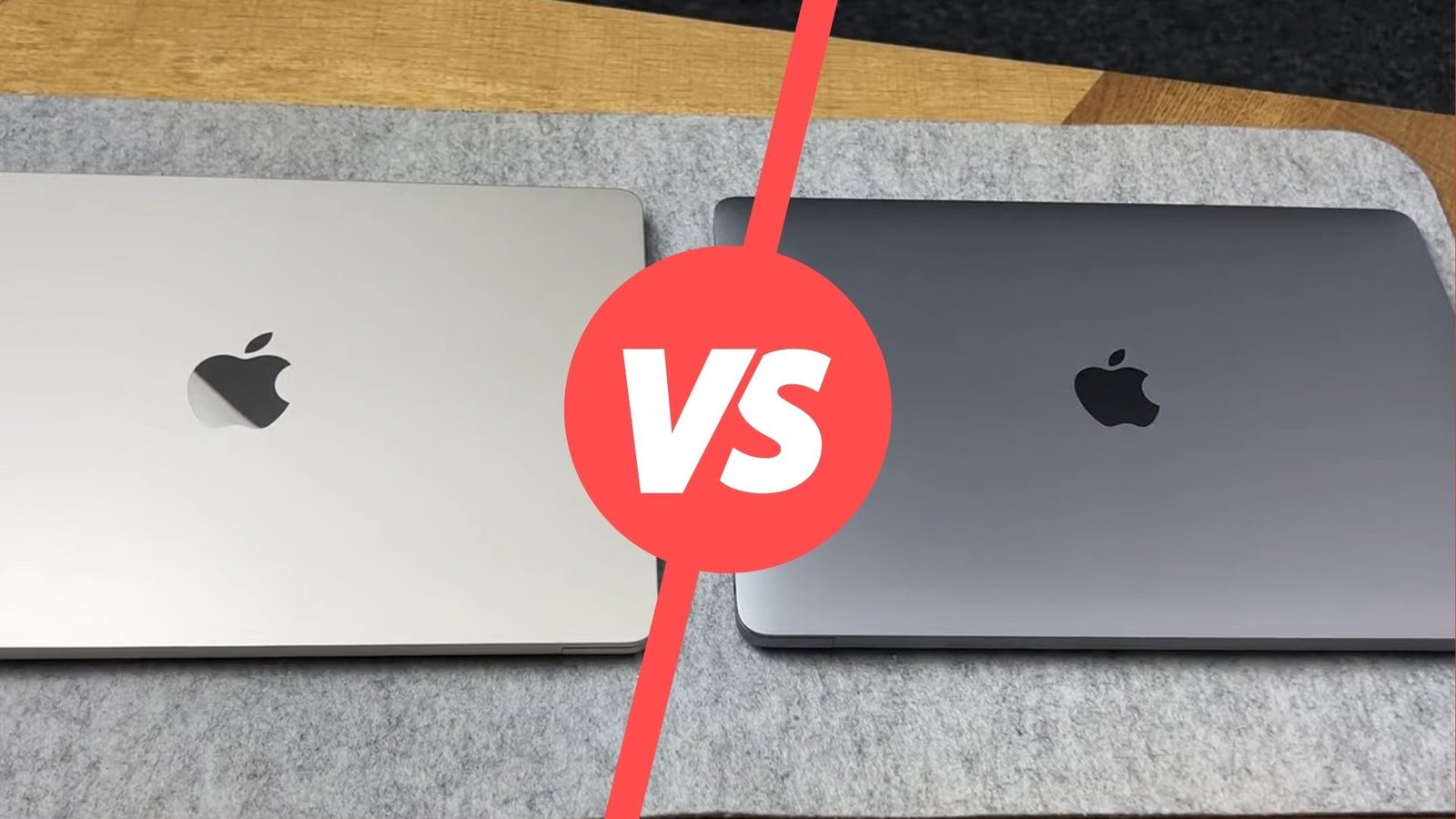 Apple has already introduced two laptops equipped with the new M2 CPUs. The M2 MacBook Air is more powerful and has better features. If you want a more powerful machine, get the M2, but is it a better value? And for that, we need full disclosure. And we must consider who these laptops were made for. Who’s the target?

Key Differences Between the MacBook

M2 is an anticipated chip. Users were pleased. Depending on what you do with it, the difference in power may not be noticeable. 18% improvement. Photoshop and Final Cut Pro will run 1.2 to 1.4 times faster. 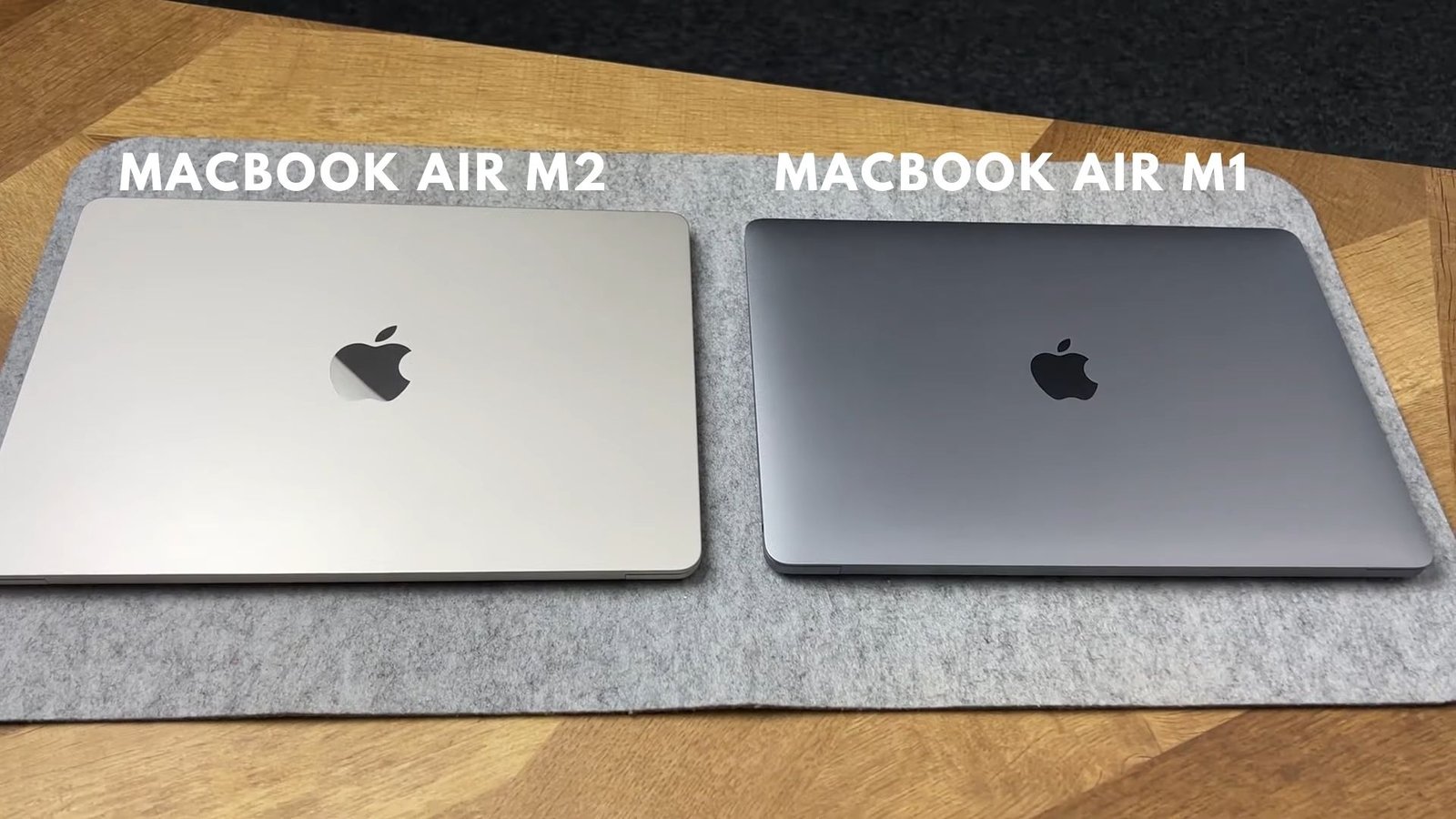 The design was overhauled this year, and the M1 model has a wedge design where the laptop gradually gets thicker from front to back. The M2 model is much more squared off and has the same thickness all the way around as the 14- and 16-inch MacBook Pro models. Of course, it’s much thinner. In practice, this makes the M2 Air feel slimmer than the M1 model. 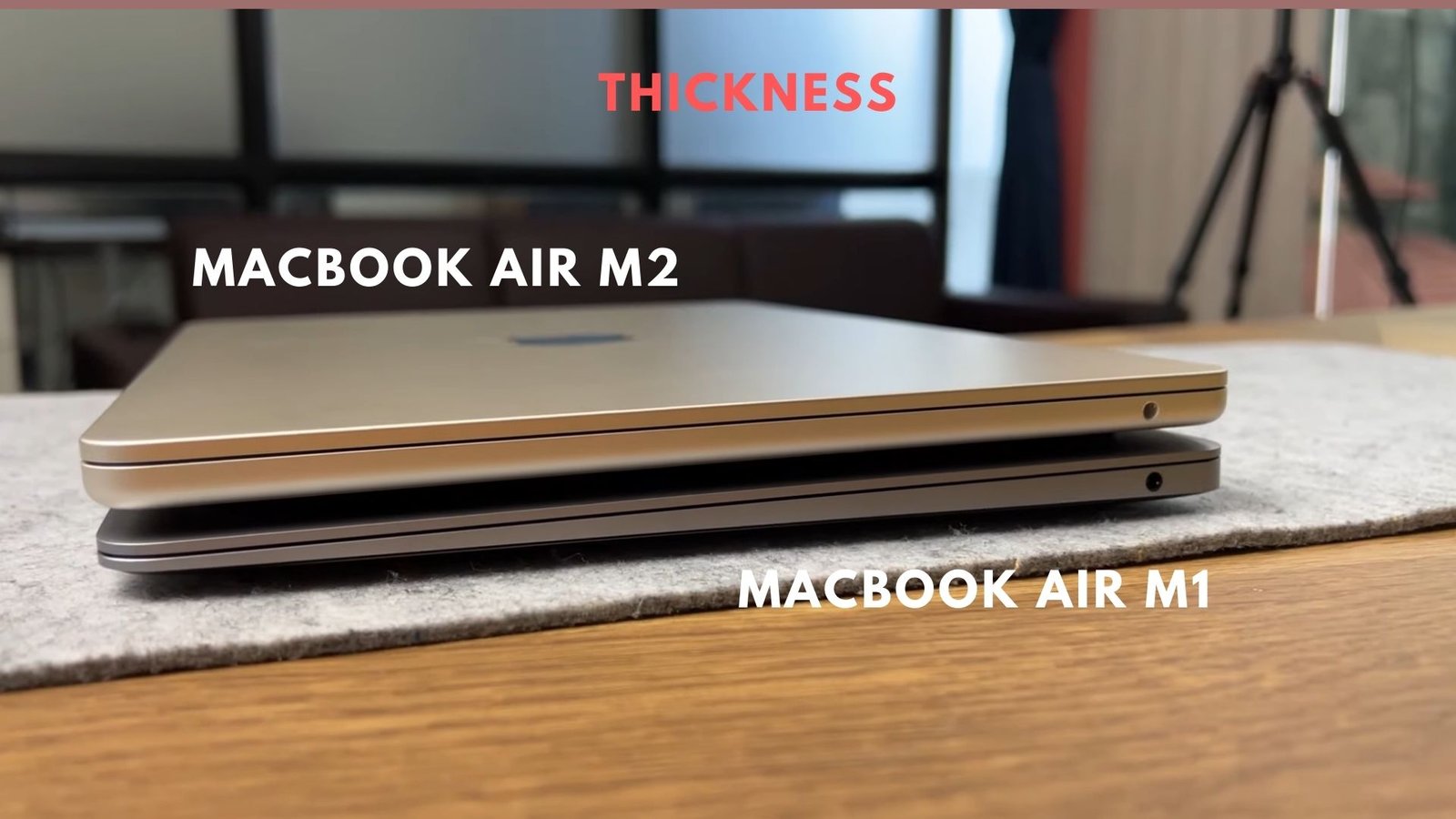 However, both of these are extremely portable. And, while the M2 model is 0.1 pound or 50 grams lighter, the difference isn’t particularly significant. 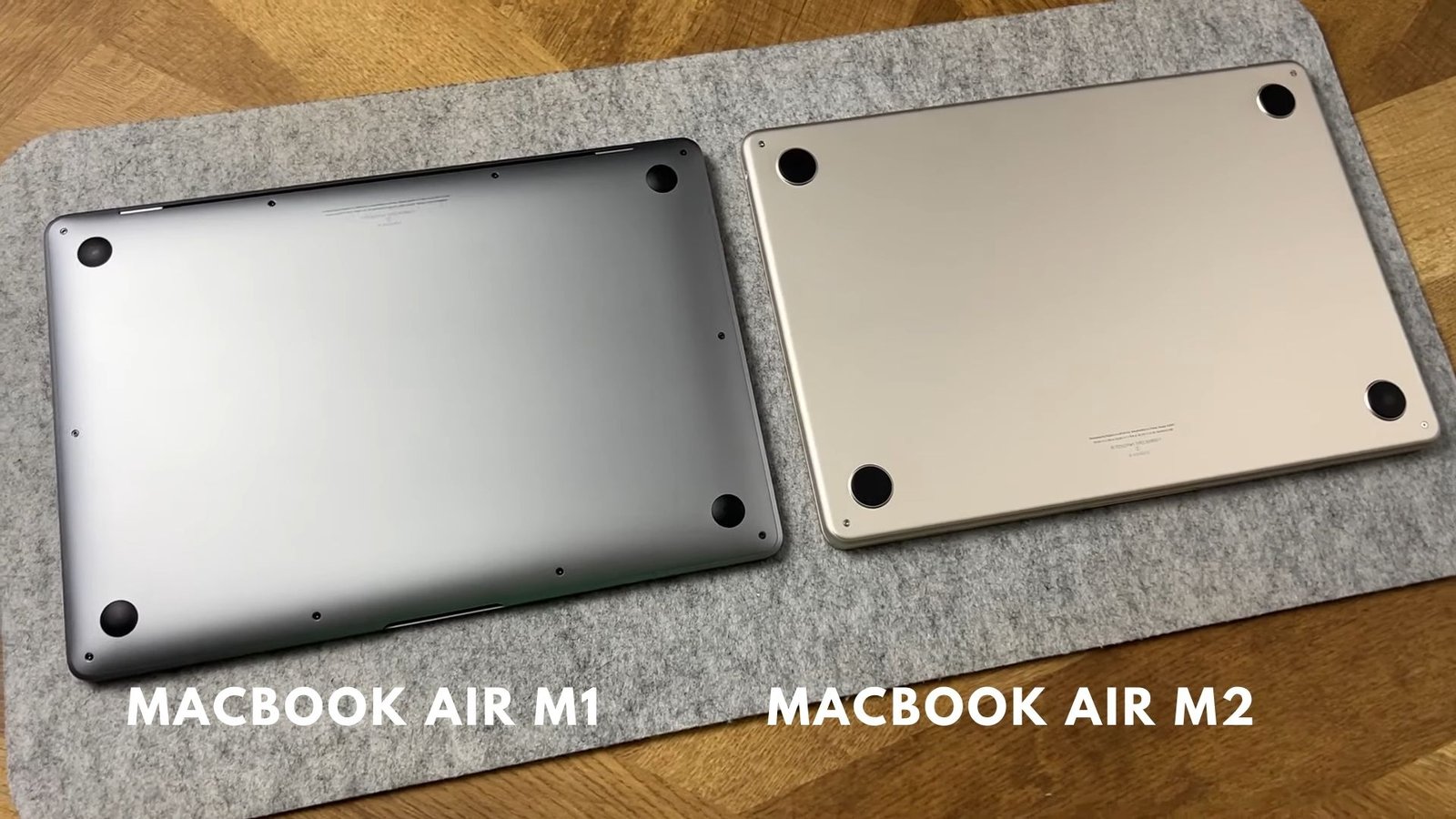 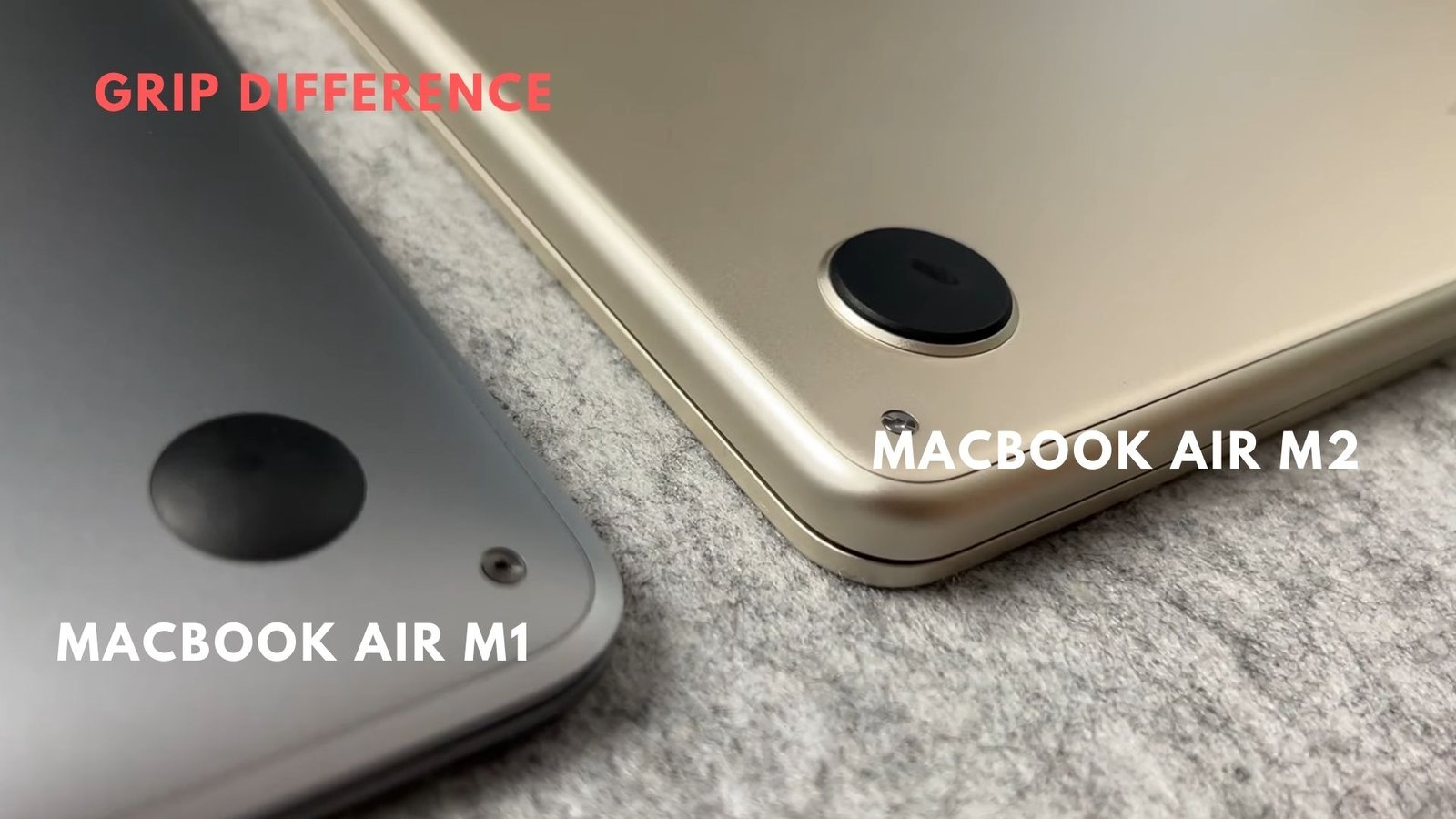 The display is one of the most significant upgrades we received with the M2 model. First, we’re upgrading the M1 MacBook Air’s 13.3-inch retina display to a 13.6-inch liquid retina display on the M2. We get a slightly higher resolution and a brighter display with a peak brightness of 500 nits versus 400 on the M1. 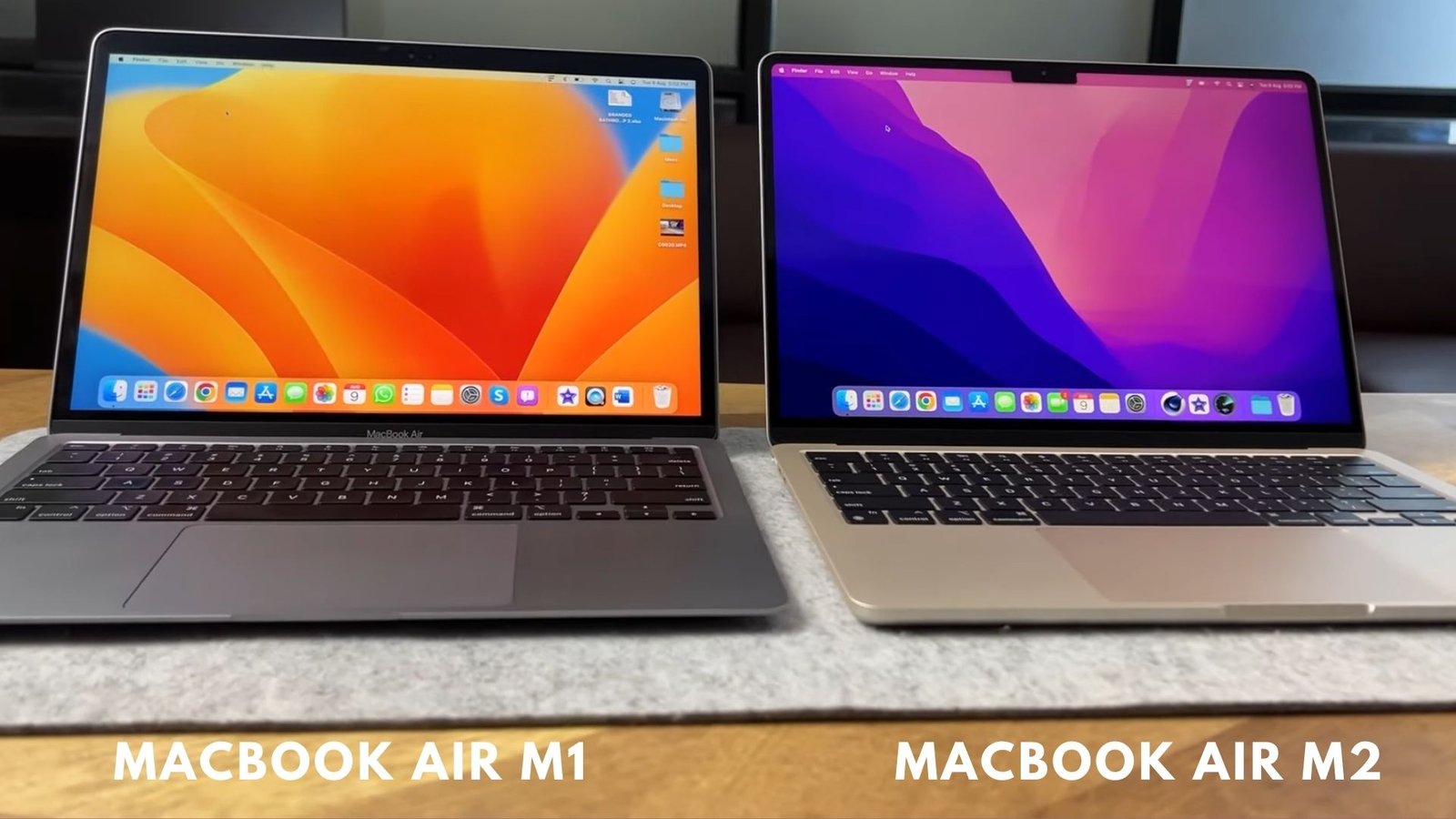 Both laptops have a P3 display, which has a wider color gamut and offers true tone for better color reproduction. This means that sensors detect the color temperature of the ambient light in the room and adjust the displays accordingly. As a result, white will always appear white rather than yellow or blue. Another advantage of the M2 MacBook Air’s newer display is that it now supports over 1 billion colors, as opposed to 16.7 million on the M1 model. How much these display upgrades will matter to you depends on what you’re going to do. If you’re just working with spreadsheets and Word documents all day, it won’t make much of a difference, but if you’re doing work where color accuracy is critical, it’ll make a big difference. 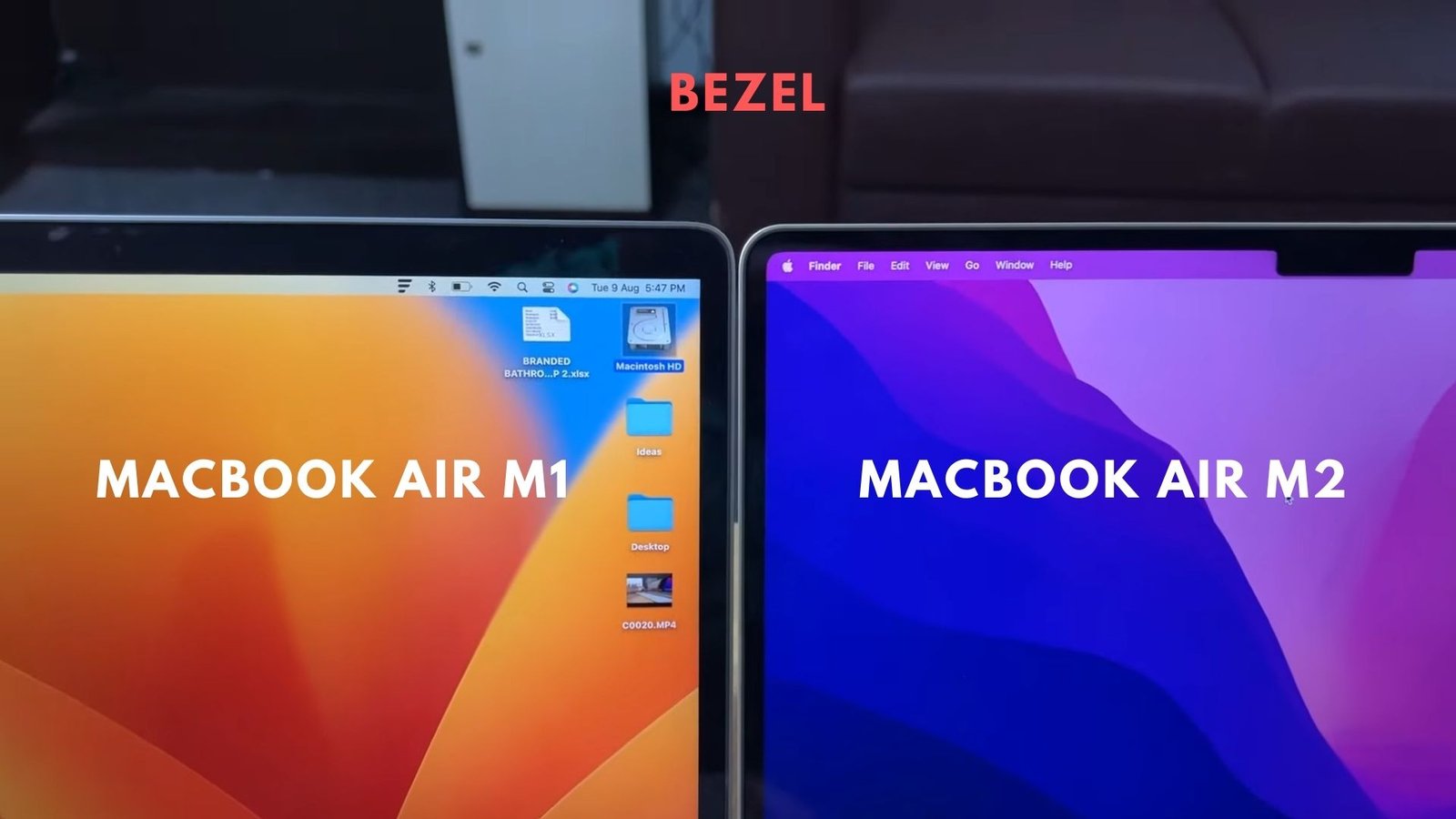 Having said that, the M2 MacBook Air display is more appealing. It’s bigger and brighter now. So it’s a better choice if you’re going to be working outside or in areas where you might encounter reflections.

When it comes to unified memory, the M1 can be upgraded to 16 gigabytes, while the M2 can be upgraded to 24 gigabytes. A more unified memory will allow you to run more apps at the same time, as well as have a large number of open tabs in your browser, all without your computer slowing down or switching to swap memory. It is a good idea to upgrade to 16 gigabytes. At the same time, Apple would not charge $200 for every additional 8 gigabytes of RAM. However, keep in mind that none of these laptops can be upgraded after purchase, and they should last you a very long time. So make certain that you get what you require. 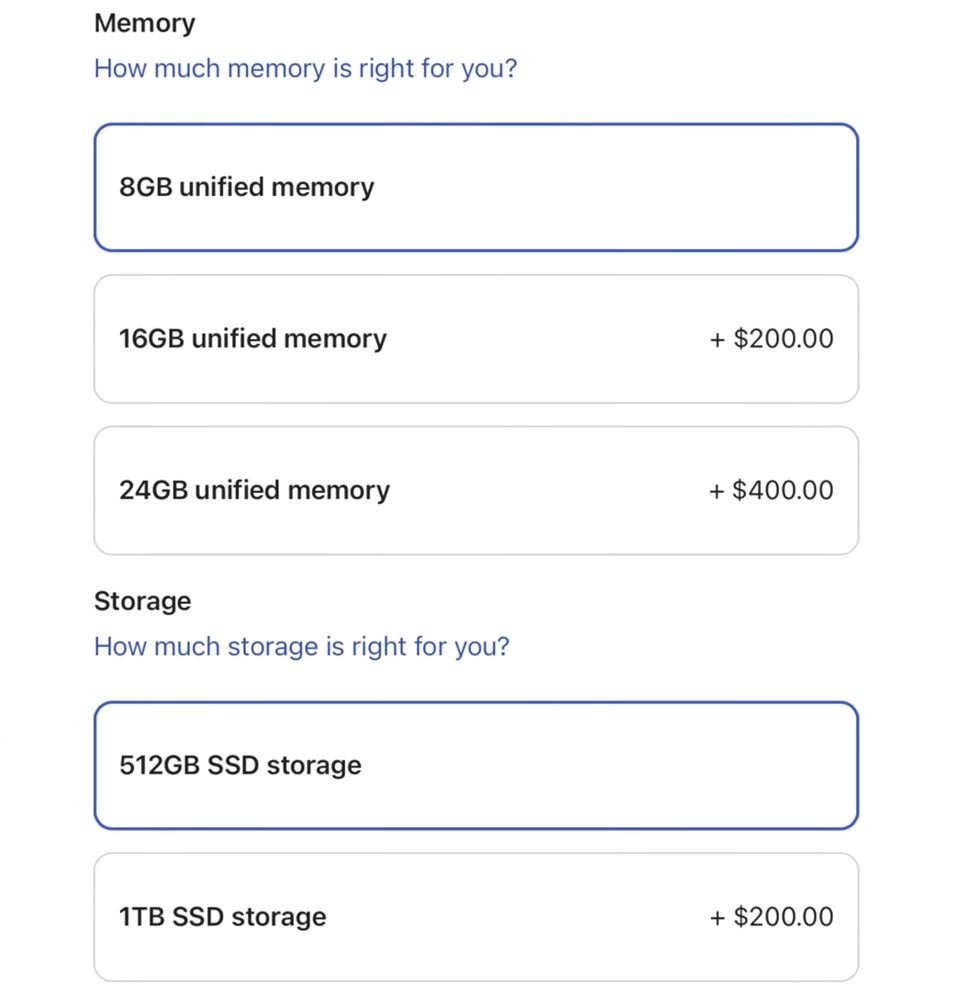 Internal storage is another upgrade to consider. 256 gigabytes is on the low side. So keep in mind how much space you require for the apps you use. You can always use an external SSD or cloud storage for files, but consider what you need to store locally on your laptop and make sure you have enough storage now and in the future. In both cases, these laptops can be upgraded to two terabytes of storage.

Both laptops come in silver and space gray. The M1 model is also available in gold. The M2 model includes Midnight and Starlight. Midnight is a cool dark blue, but it will get a lot of fingerprints. Every time you pick it up, open it, close it, or do anything with it, you’re going to see fingerprints. 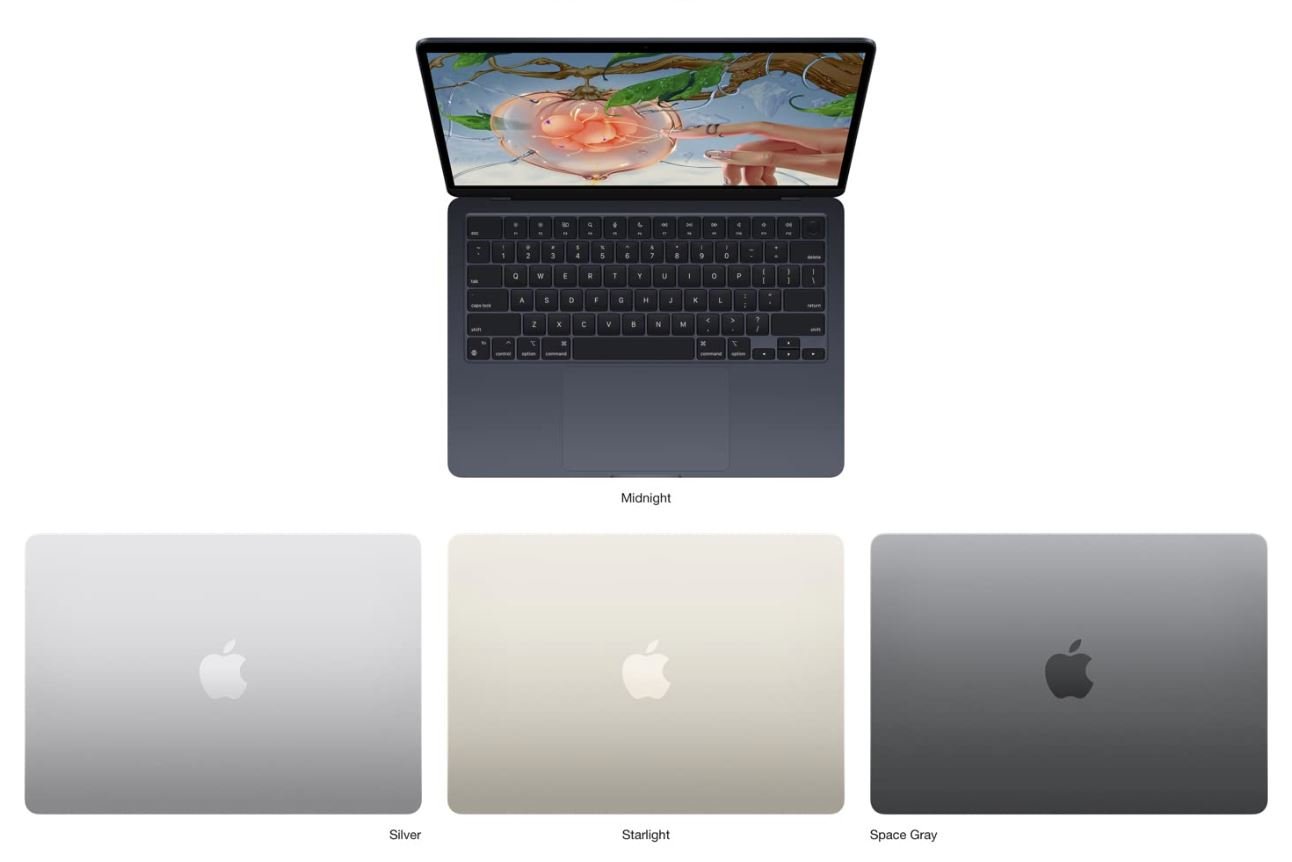 As far as ports go, some things have changed and some have stayed the same. We’re still getting 2 Thunderbolt ports on the M2 model. And just like with the M1, both are located on the left. Now, this unfortunately means you can still only connect accessories and charge the M2 MacBook Air from the left side, just like with the previous model. However, we are getting an upgrade here because the M2 model includes a MagSafe 3 port. So you can now quickly and safely charge your MacBook Air without having to occupy one of the Thunderbolt ports. Something else that was a bit disappointing is that the ports on the M2 MacBook Air are still Thunderbolt 3 ports. So we still only have native support for one external monitor.

The next update that we got with the M2 MacBook Air is that now the 3.5 millimeter headphone Jack has support for high impedance headphones. 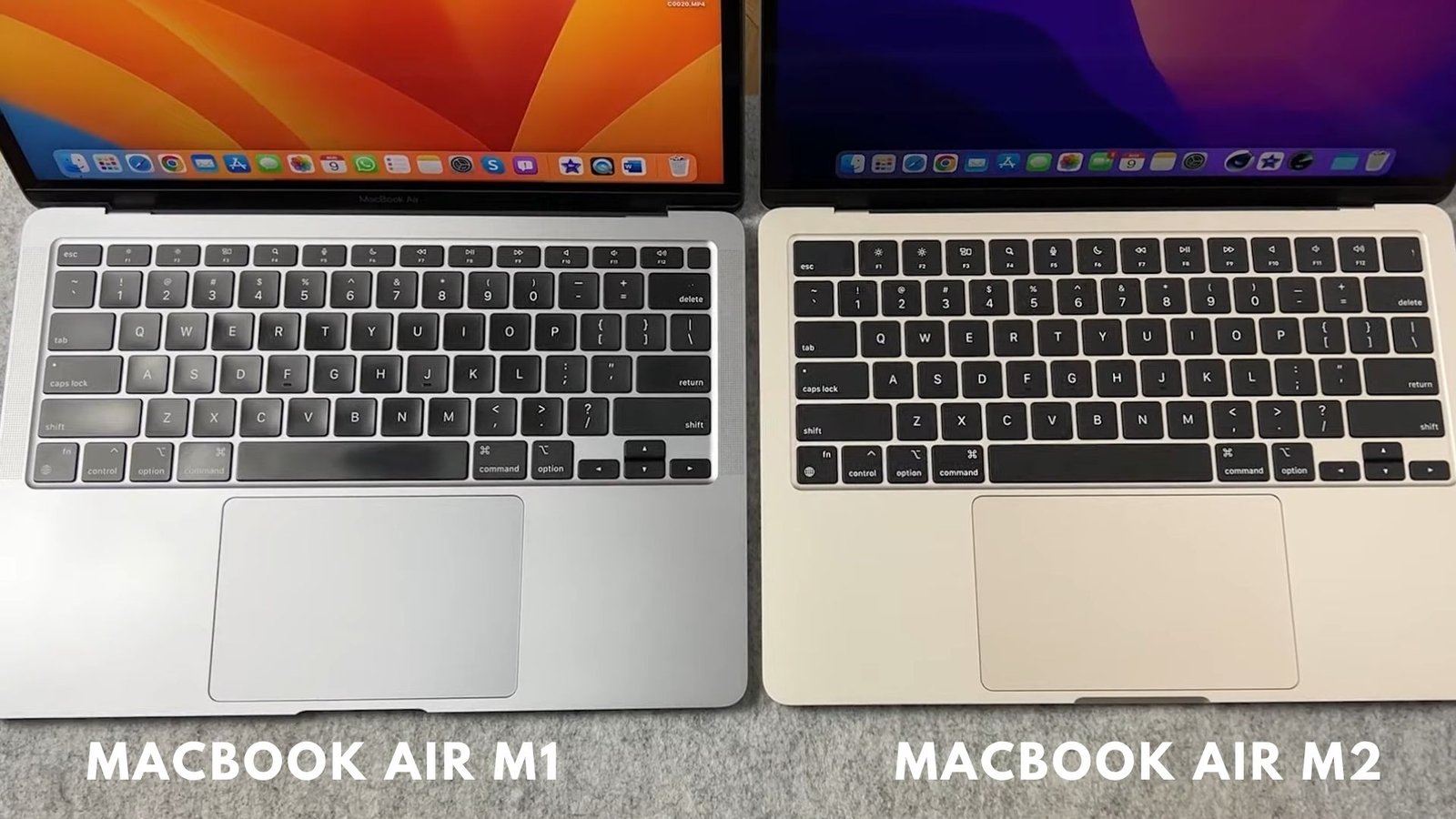 In terms of typing experience, both of these laptops have amazing keyboards that are on par with any keyboard. The M1 model is unique in that the front of the laptop is extremely low due to the wedge design. So, while some of the thicker MacBook Pro models are very comfortable to type on, the front edge is higher and digs into my wrist. And, despite having the same design as the larger MacBook Pro, the M2 MacBook Air is so much thinner that the edge isn’t really an issue. The M2 MacBook Air keyboard does include one upgrade: a full-height row of function keys at the top, as well as a larger touch ID button. The functionality remains unchanged, but the larger keys are more comfortable to use.

The trackpad on the M2 MacBook Air has also been increased in size. In general, the trackpads on MacBooks are among my favorites of any laptop I’ve ever used.

The camera on the M2 MacBook Air has also been upgraded to 1080P resolution, up from 720P on the M1 MacBook Air. We also get a newer image signal processor on the M2 chip, as well as improved low-power performance. Here’s a camera and microphone test of the M1 and M2 MacBook Airs. This should give you a good idea of the image and audio quality to expect.

If you look closely at the MacBook Air’s body, you’ll notice that the speaker grills to the right and left of the keyboard have been removed. Apple upgraded the M2 MacBook Air to a 4-speaker system, which is located on the back of the keyboard, directly under the display. In terms of sound quality, there’s a noticeable improvement over the M1 models; the speakers are louder, and the mids and highs are a little brighter. The audio also has more presence overall. It’s more full and has less of that tinny quality. Audio quality in a laptop is one of Apple’s true strengths.

The one consistent benefit has been battery life. Both of these models have a video playback time of 18 hours and a wireless web browsing time of 15 hours. The M2 Air has a 52.6 watt-hour battery, whereas the M1 Air has a 49.9 watt-hour battery. And both of these are more than enough to get me through a full day of use. And this is something that has really impressed me about Apple. The battery life on this entire lineup of SOC laptops has been outstanding.

I believe it is safe to say that a large portion of the target audience for these laptops will be uninterested in benchmarks, but there are some interesting things to consider when comparing these two chips. The majority of them support the M2, but not all. The M2 has more powerful high-performance cores and more efficient high-efficiency cores in terms of CPU performance. As expected, it outperforms the M1 in terms of short-term, single-core and multi-core performance. When it comes to GPU performance, the M2 MacBook Air has more GPU cores and outperforms the M1. Remember, neither of these has a cooling system or a fan.

When we look at sustained CPU performance with Cinebench, we can see that the M1 has an 11% drop in performance when comparing a 10 minute test to a 30 minute test, and the M2 has a 9% drop. Context, I believe, is extremely important here. So I’d like to emphasize that this is a test that runs these laptops at full CPU capacity for 30 minutes straight. And I don’t think the vast majority of MacBook Airs will ever do that. Of course, if you need consistent performance, one of the MacBook Pro models is probably a better choice.

The base models of both laptops have an eight-core CPU, eight gigabytes of RAM, and 256 gigabytes of storage. The M2 model has a GPU with 8 cores, but Apple only sells the M1 model, which has a GPU with 7 cores, unless you find a refurbished one on their website. Now, realistically, for the MacBook Air’s target audience, the extra GPU core isn’t going to make much of a difference. In terms of pricing, we’re looking at $1,200 for the M2 and $1,000 for the M1. You can actually upgrade to a 10 core GPU with the M2 chip for an extra $100 if that’s something your specific workflow would benefit from.

The M2 MacBook Air has a new design, a faster processor, a larger and better display, a better camera system, and improved speakers. You can increase the unified memory to 24 gigabytes and use MagSafe or faster charging. Some of the improvements made to the M2 MacBook Air are extremely useful.

I don’t think that the increased processing power will be a big selling point for the vast majority of the people who are supposed to buy the product. However, if the display, camera, and speakers are your top priorities, go ahead and purchase one.

In terms of processing power, a combination of 256 gigabytes of storage and 8 gigabytes of RAM is a little low for a laptop that will last at least five years. 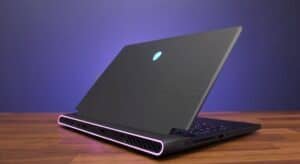 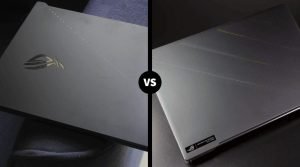 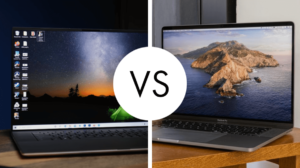 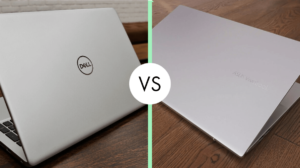 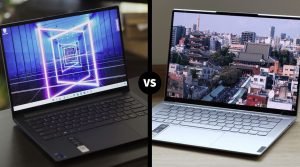