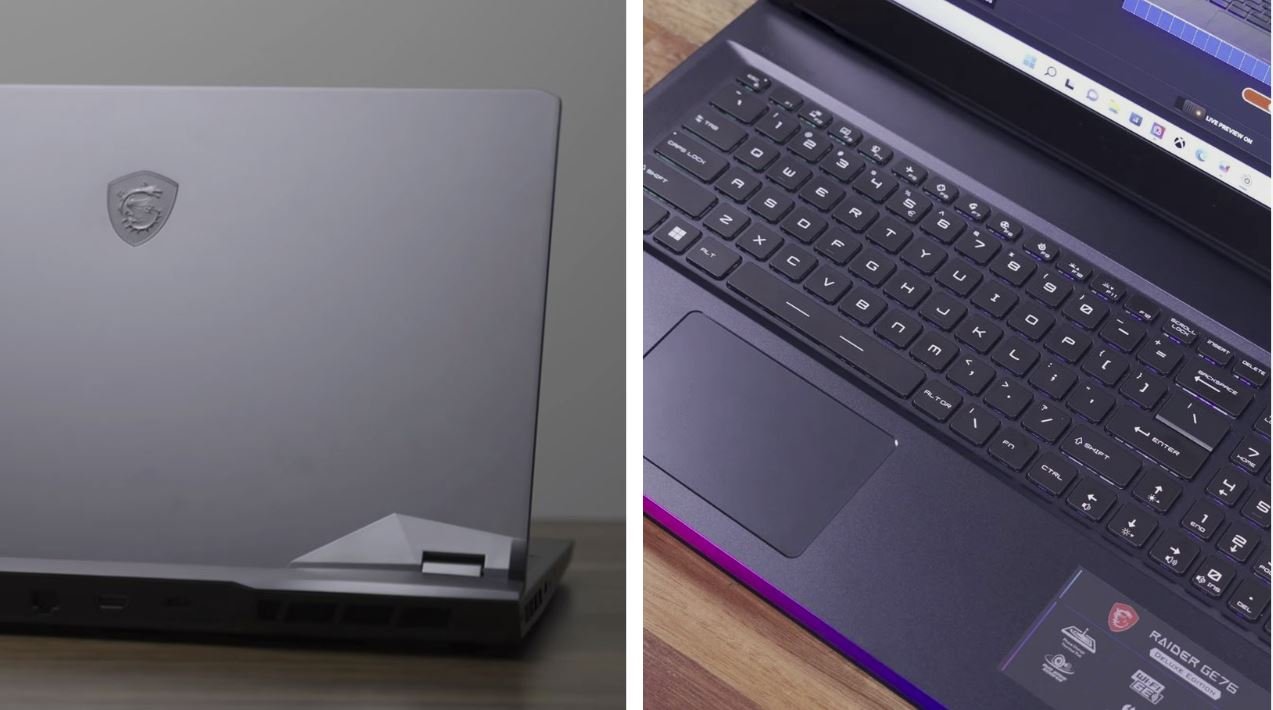 You can play high-load games with high resolution, and light games such as e-sports titles have machine power that can maintain a high frame rate even at the highest setting.
In addition, the 17.3-inch large screen and high-quality sound provide a powerful and immersive gaming experience.

The price is quite high, but this is a desktop-less gaming notebook with the best gaming environment.

The area around the LCD is black, but the palm rest surface is a dark, dark blue color. It is also characteristic that the front side is shining. The top plate is slightly brighter than the palm rest part, and the MSI dragon mark is placed. The rugged feeling of the hinge part is cool. The thickness of the body is 25.9 mm. 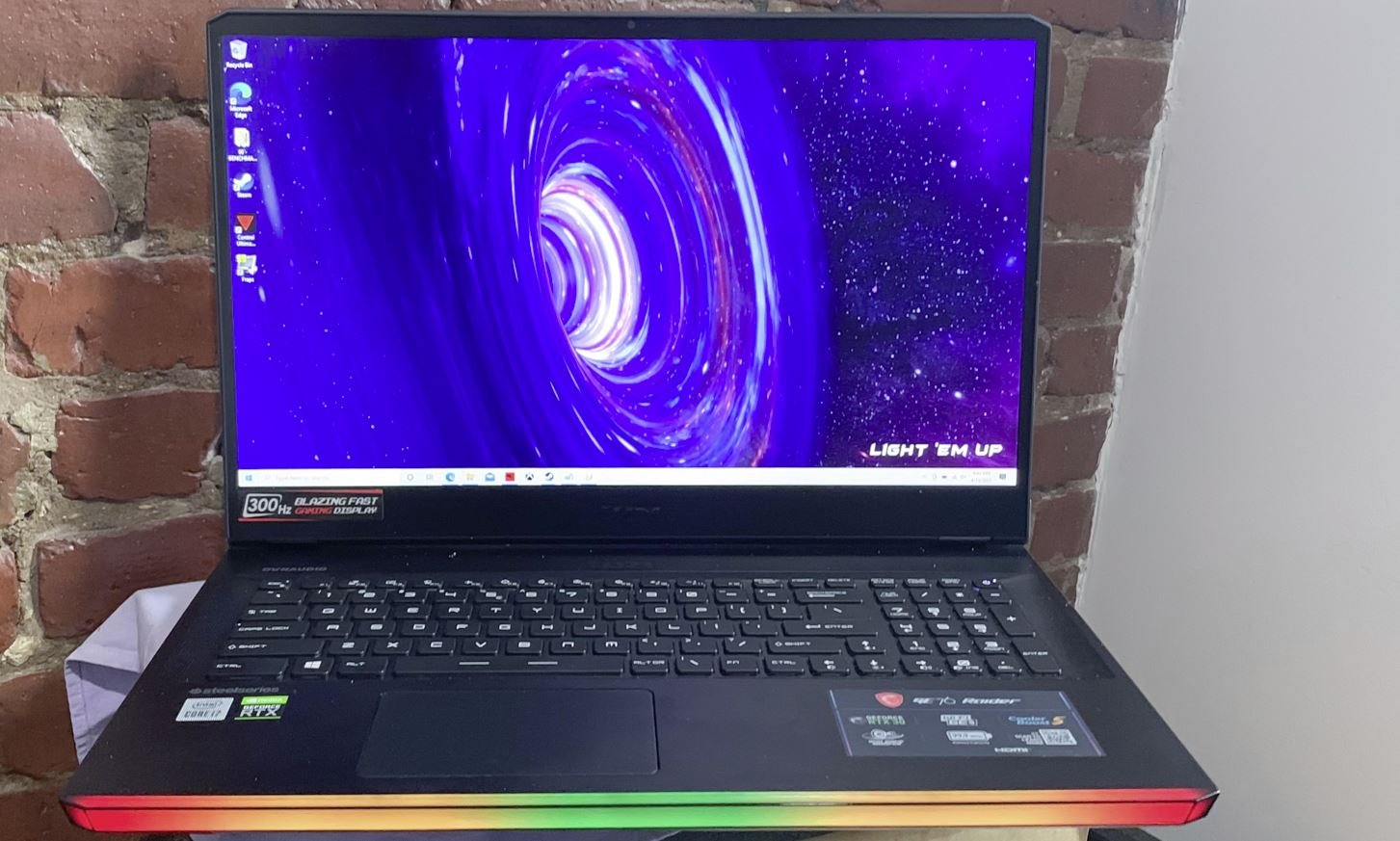 In particular, WQHD (2560×1440) + high refresh rate LCD is said to have a larger target and clearer display than full HD, making it easier to catch and improving aim accuracy, and the 2022 e-sports scene is said to be highly refreshed to 1440p. It is said that rate LCDs will become the mainstream. 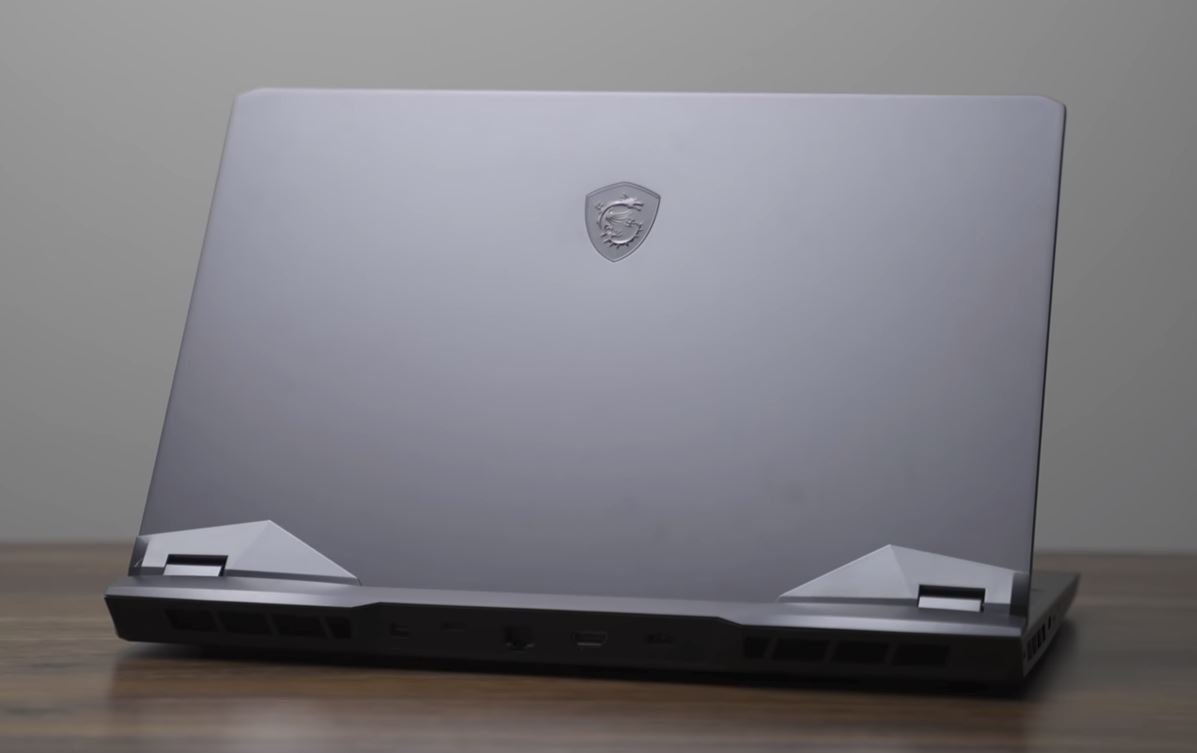 In addition, the left and right are equipped with “DYNAUDIO” high-quality speakers and woofers, allowing you to experience a powerful and realistic game with a large screen + high resolution + high refresh rate + high-quality sound. In addition, the color gamut of the LCD is wide so that it can be used not only for games but also for creative work. 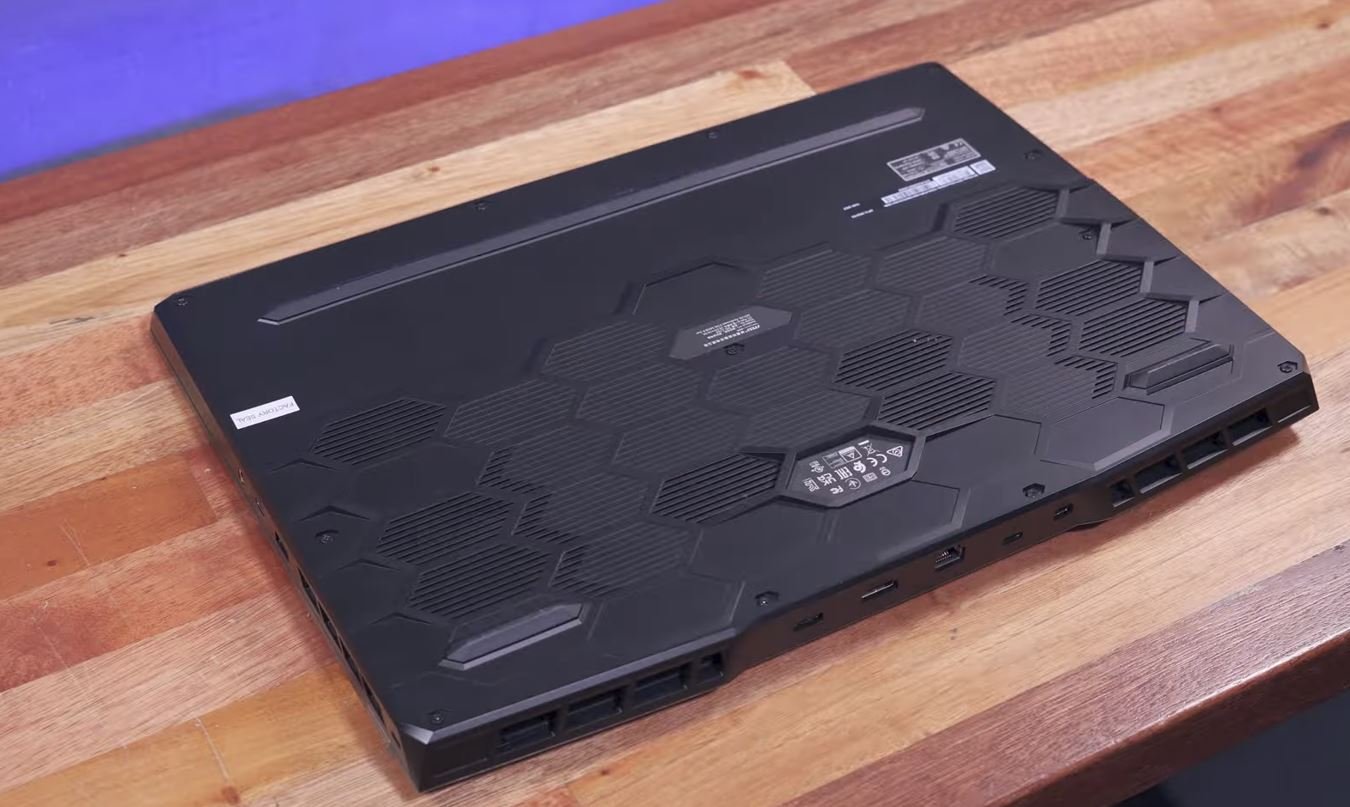 The MSI Raider GE76 12U is equipped with “GeForce RTX 3080 Ti Laptop 16GB”, which is the highest class of graphics for notebooks so that you can comfortably play high-load games with high resolution and high frame rate.

In addition, since it is equipped with 16GB of VRAM, it has the machine power to operate comfortably at 60 fps or more even in the ray-tracing environment, which was previously insufficient for notebook PCs.

The model of this product is compatible with the ultra-high refresh rate of WQHD 240Hz and has little afterimage, so it is an LCD that is easy to play games. It has a wide color gamut so that it can be used for creative purposes. Click the tabs below to see other characteristics. The maximum brightness is 307 cd / m 2 in the measurement of this site, which is normal.

The benchmark score is the highest class and the top-class score. The score was not much different from the RTX 3080 of the TGP 175W, but the RTX 3080 Ti with 16GB of VRAM has a better frame rate in a real heavy game. 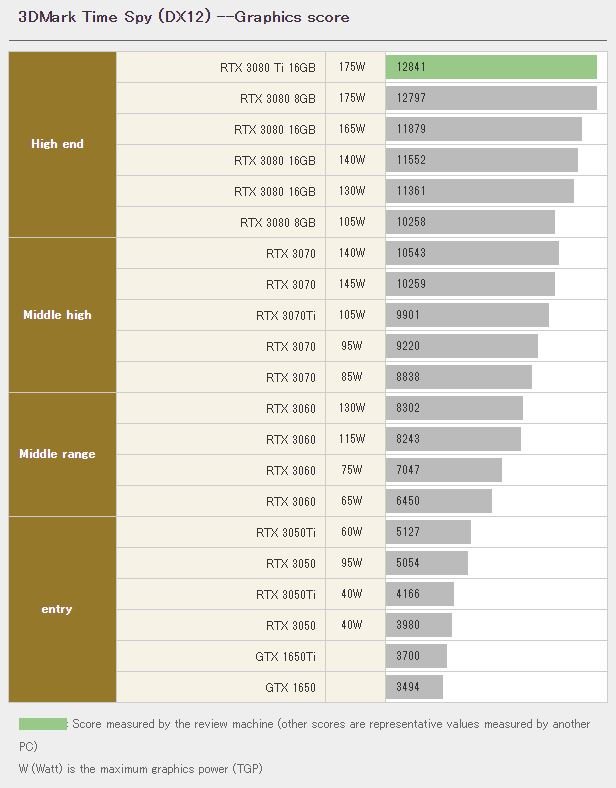 The MSI Raider GE76 12U is equipped with the “Core i9-12900HK“, which is the highest level of the 12th generation Intel processor and is top class in both multi-score and single-score shown in the benchmark score below. It has a higher score than the Ryzen 9 5900 HX and Core i7 11800H, which were often installed in existing gaming laptops. High processing performance is an advantage when playing games and using software for creators, such as RAW development and video editing work.

The MSI Raider GE76 12U is equipped with the highest-end CPU and GPU, so solid heat dissipation performance is required.

As shown in the photo below, this product has a structure that takes in air from the bottom and exhausts it from four places on the side and back, and inside it, two fans and six heat pipes are arranged.

Since it is high-end gaming performance, the temperature of the CPU / GPU during the game is not low. Still, it seems that the thermal control is also solid so that it operates stably while drawing out high performance. 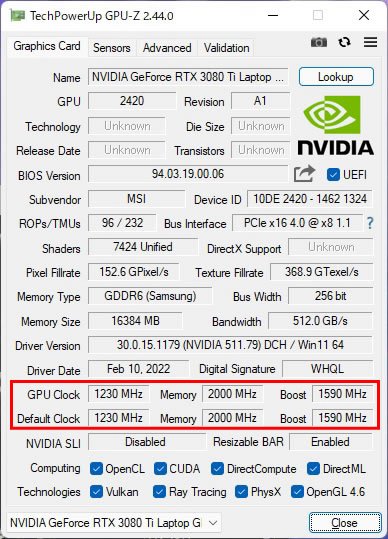 The MSI Raider GE76 12U has RGB lighting on the front and keyboard. In addition, the keyboard uses a SteelSeries gaming keyboard that has a reputation for operability and durability, so you can enjoy the game comfortably without having to prepare a separate keyboard.

RGB lighting settings are made from SteelSeries’ dedicated software, “SteelSeries Engine“. You can set the color for each key and choose from several types of light emission patterns.

Key macros can also be built, and if you use other SteelSeries products such as gaming headsets, you can centrally manage them from this software.

The Web camera is equipped with a high-resolution camera with approximately 2.07 million pixels. It is a little warm color, but it is a good image because of its high resolution.

The speakers are equipped with DYNAUDIO’s high-quality speakers. There are two stereo speakers on the side of the keyboard and two woofers on the side, giving you a sense of realism in games, videos, and music.

The interface has a full-size USB, USB-C (video output compatible), SD card reader on the side, and a power connector, HDMI, Mini DisplayPort, Thunderbolt 4, LAN (2.5 Gbps) on the back.

The opening angle of the LCD is not so large, but it shouldn’t be a problem if you put it on your desk. 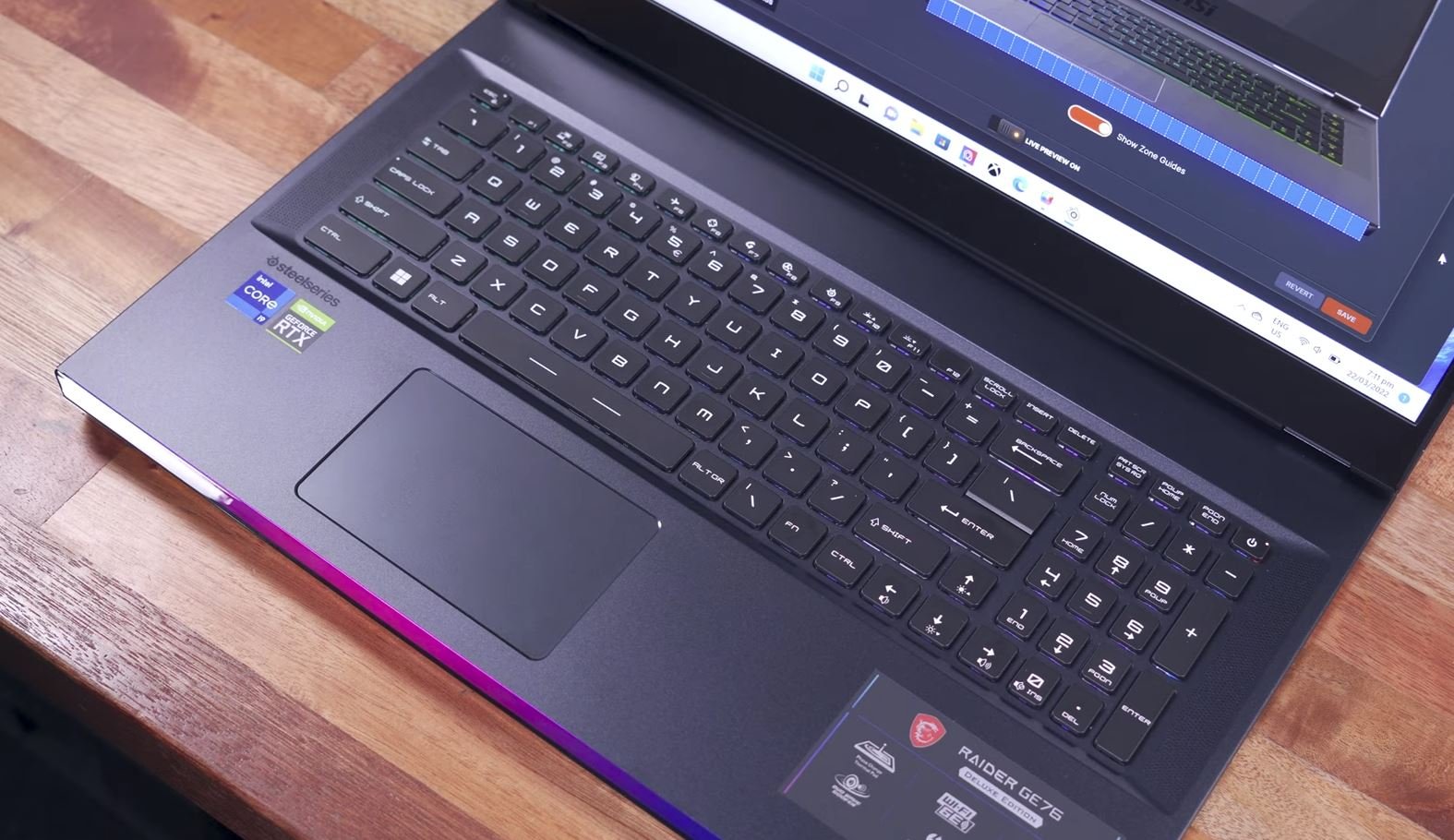 I think it is a keyboard that is easy to play games with because it has a protrusion that makes it easy to recognize the “W” key, and the size of the arrow keys is large.

On the other hand, the part where the right shift key is not directly under the “Enter” key but is a little smaller in size, the “Fn” key is placed next to the right “Ctrl” key, and the arrow key is in the numeric keypad is a little. It’s anomalous, but you won’t find any inconvenience during the game.

The touchpad’s surface is silky and easy to operate, but the click buttons are a little firm (requires force when pressing). We recommend using a mouse.

The battery capacity is 99.9Wh according to the manufacturer’s published value, which is a very large capacity.

In addition, a large 17.3-inch screen with high-quality sound enables a realistic and powerful video experience.

The MSI Raider GE76 12U gives you the best gaming experience without the need for a desktop.

However, because it is equipped with high-performance parts, it generates a lot of heat, and in the “ultimate performance” mode, you may be concerned about the noise during cooling.