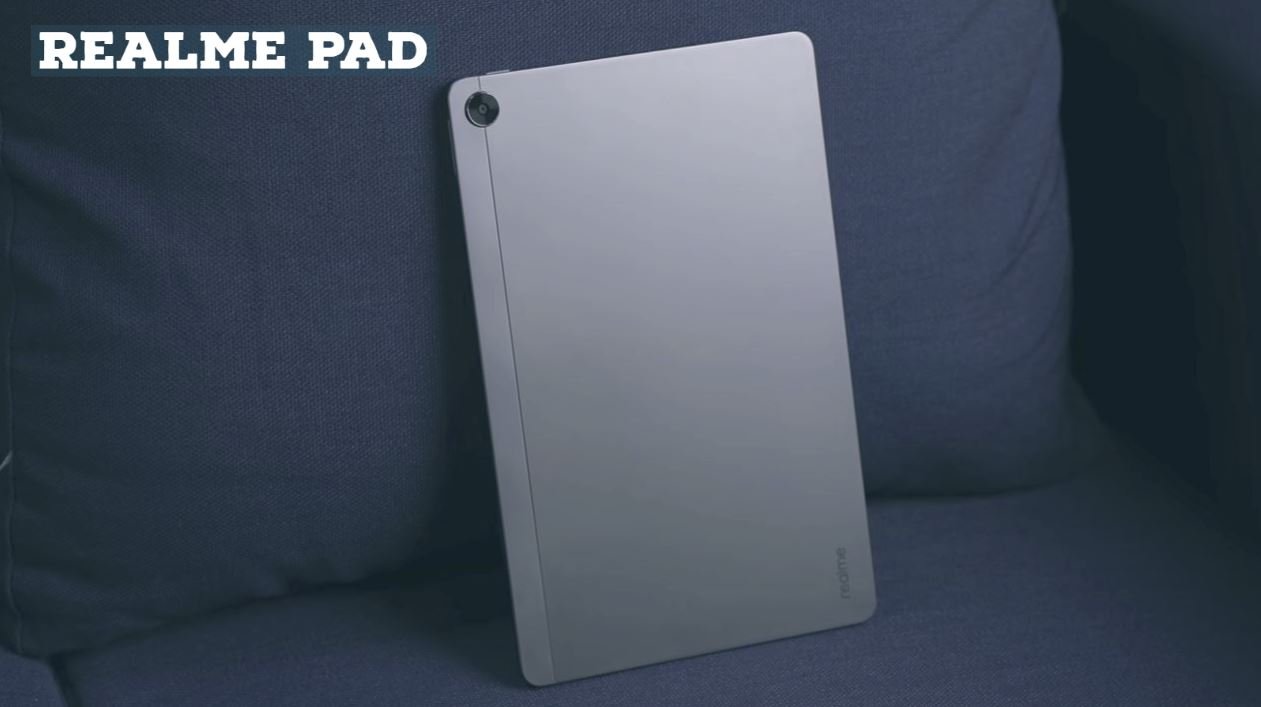 Realme is taking off outside the smartphone division and shaking up the tablet market. The Realme Pad is a solid entertainment tablet with a 10.4-inch display available at a market price of $ 200. Can you get a good “big Android device” at this price, or should you plan more money in principle? We had the Realme Pad in a practical test for two weeks!

The Realme does not carry out any experiments in terms of design and quality, but it offers solid fare in the price range. The tablet was available in gray and gold, but it is only available in gray so far. You choose a semi-gloss metallic paint that is halfway resistant to fingerprints and scratches. 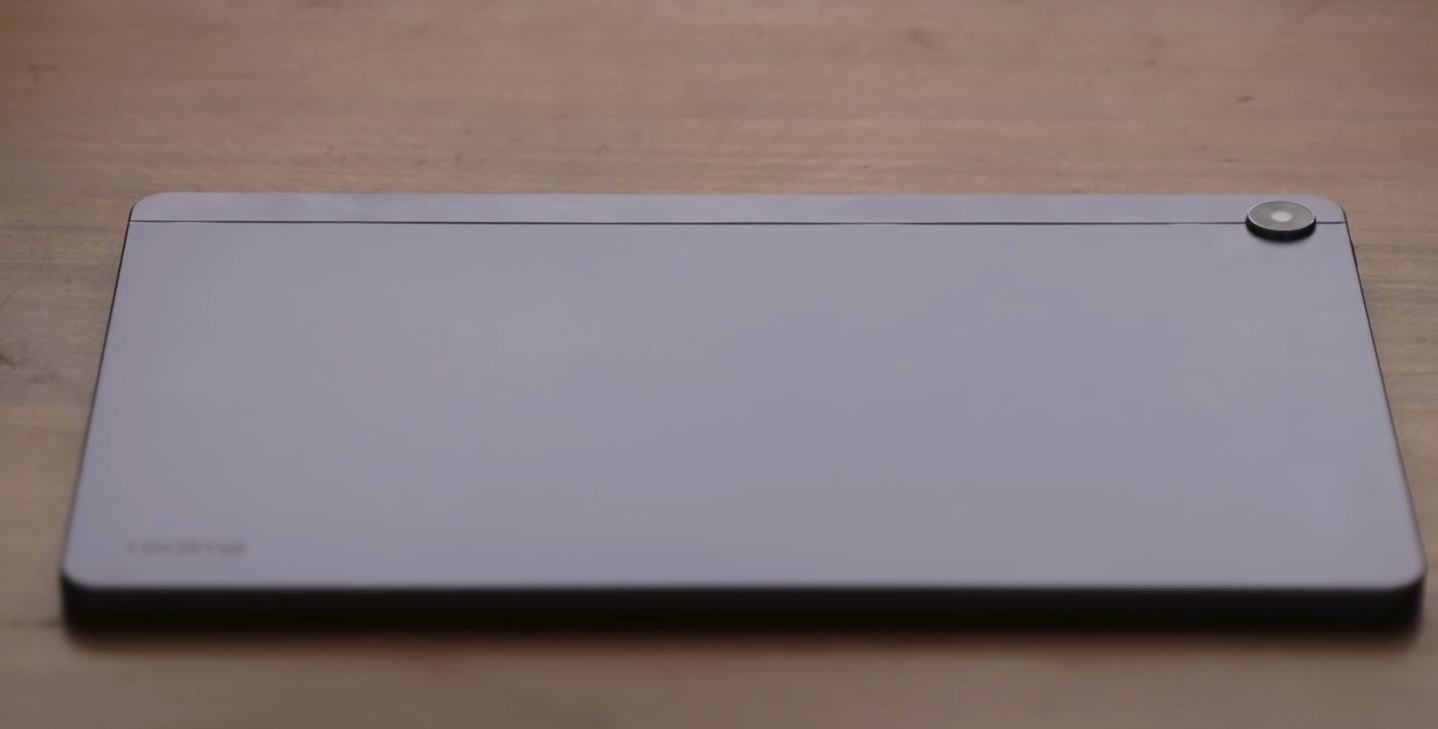 The dimensions are 246.1 x 155.9 x 6.9 millimeters, and the tablet weighs 440 grams. The weight is still in the green area, and with the 9mm wide frame around the display, you can hold the Realme Pad relatively easily in one hand between your thumb, index, and little finger for support.

When it comes to the choice of material, the Realme Pad makes a high-quality impression. The housing is made almost entirely of metal. Only the power button, volume rocker, and offset strip are lacquered plastic. The strip on the back of the rear camera ensures WLAN and (optional) LTE reception. The metal back feels great and offers enough stability. The Realme Pad can be twisted with effort with two hands, but it doesn’t crack. 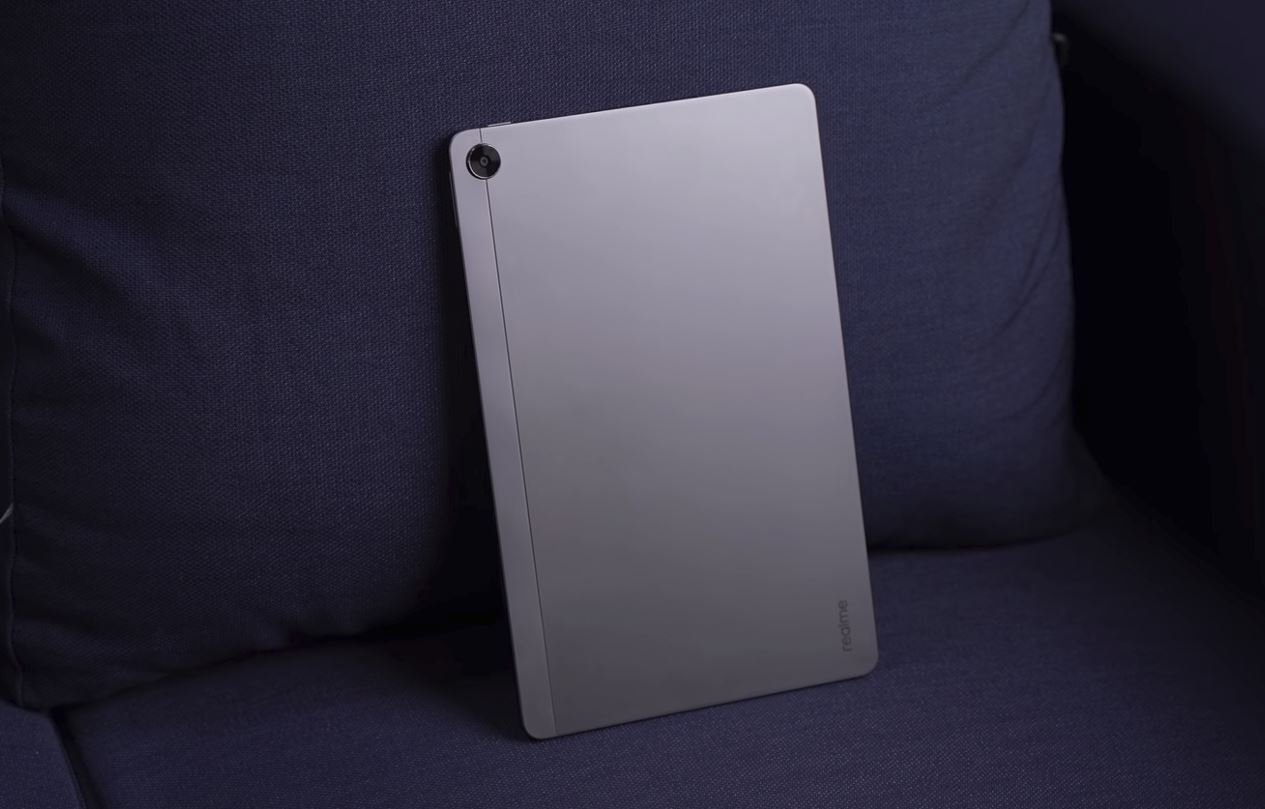 If we look at the Realme Pad in landscape format, the power button and volume rocker are in the upper left corner. The 3.5mm jack connection can be found diagonally opposite in the lower right corner. The USB-C 2.0 port is located in the middle on the right. The SIM and MicroSD card slot and the two microphones are embedded in the frame at the top. The four speakers are on the left and right on the short side, and you don’t usually cover them with the heels of your hands when you hold them. The frame is only rounded at the corners.

The Realme Pad arrives only with an 18-watt power supply and the USB-A to USB-C cable, almost like an iPad. Unfortunately, Realme currently does not offer any accessories for its tablet. A glance at the typical sales platforms shows the common accessories: silicone protective cover and cases with a stand-up function.

A 10.4 inch LCD IPS panel is used at the front of the Realme Pad. The display has a 2000 x 1200 pixels resolution and thus achieves a pixel density of 224 pixels per inch. At a normal distance, the image is still sufficiently sharp. In the case of video content in 16: 9 format, there are only 3mm bars at the top and bottom. Unfortunately, the Realme Pad does not have a higher refresh rate and leaves 60 Hertz. More would probably have made the Helio G80 sweat. 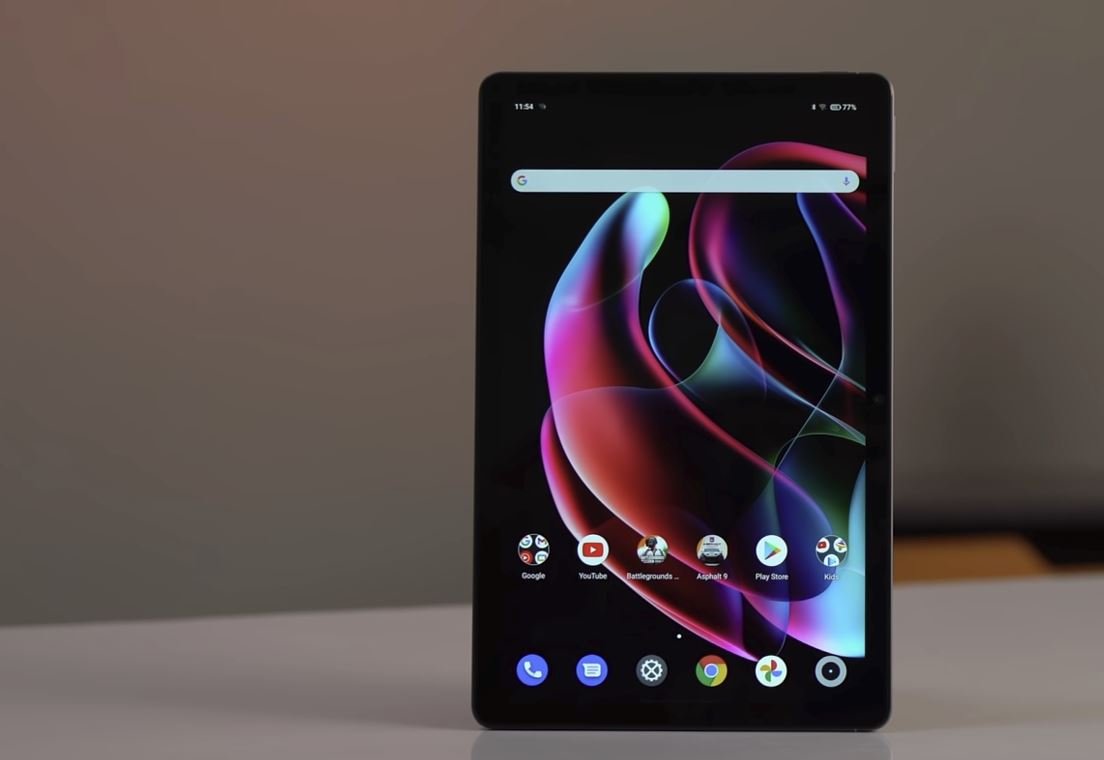 With Boost, we reached a maximum of 460 lux display brightness, sufficient for bright surroundings but not for direct sunlight. The illumination of our Realme Pad is pretty even, but it drops by almost 20 lux to the lower right corner (with the 3.5mm jack connector). With a gray background, there is also a slight halo on the display side of the USB-C port. The automatic regulation of the brightness, on the other hand, sets the display brightness a little too dark, especially when there is little light in the room. Then you have to readjust yourself.

The LCD panel displays colors quite cold, and you can perceive a slight bluish cast on websites with mostly white images. The contrast, on the other hand, is good for an LCD. There is no HDR certification. Widevine L1 certification is available for video streaming from pay-to-watch providers. The Realme Pad streams films and series in full HD from all common providers. This is a big advantage over the small manufacturers such as Alldocube and Teclast. In addition, the display of the Realme Pad has very stable viewing angles.

Unfortunately, there are no options in the settings to configure the display in terms of color or contrast. As usual, there is a reading mode and blue light filter onboard – both of which can be terminated and adjusted. A dark mode is also integrated, but of course, does not have the same effect as an AMOLED panel.

The built-in “2K / WUXGA +” display is solid in the price range. The brightness is sufficient, the picture is attractive, and the resolution is high enough. A better display with a 90Hz refresh rate would have been good for the Realme Pad.

Realme relies on MediaTek for its first tablet – but unfortunately not on a new Dimensity processor: the Realme Pad is powered by the Helio G80. MediaTek’s SoC was presented in February 2020 and has already been used in numerous smartphones that we tested. The octa-core consists of two Cortex-A75 with 2.0 GHz, six Cortex-A55 cores with 1.8 GHz, and the Mali-G52 MC2 with 950 MHz as GPU. The processor is manufactured using the 12 nm process and is therefore “more energy-hungry” than modern chips. 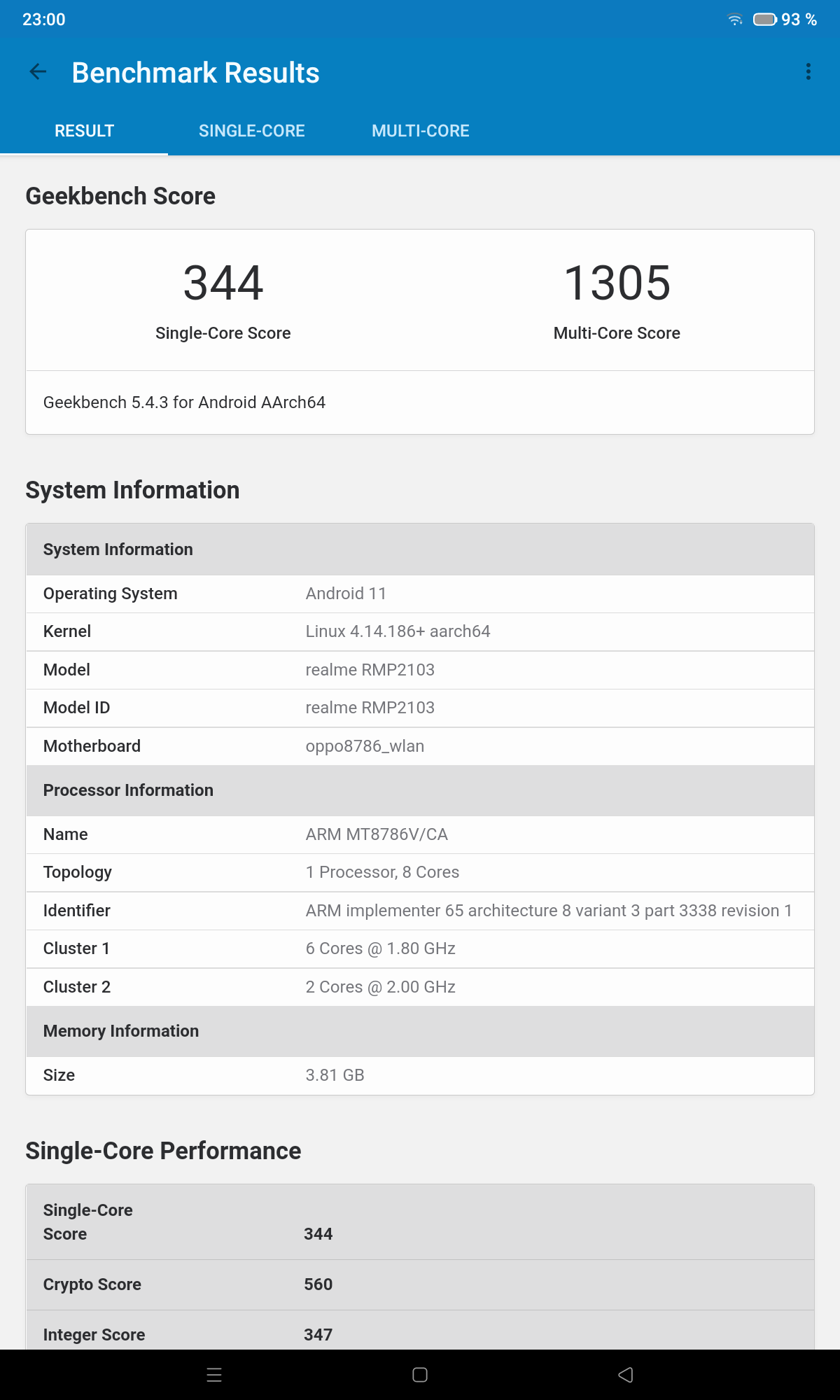 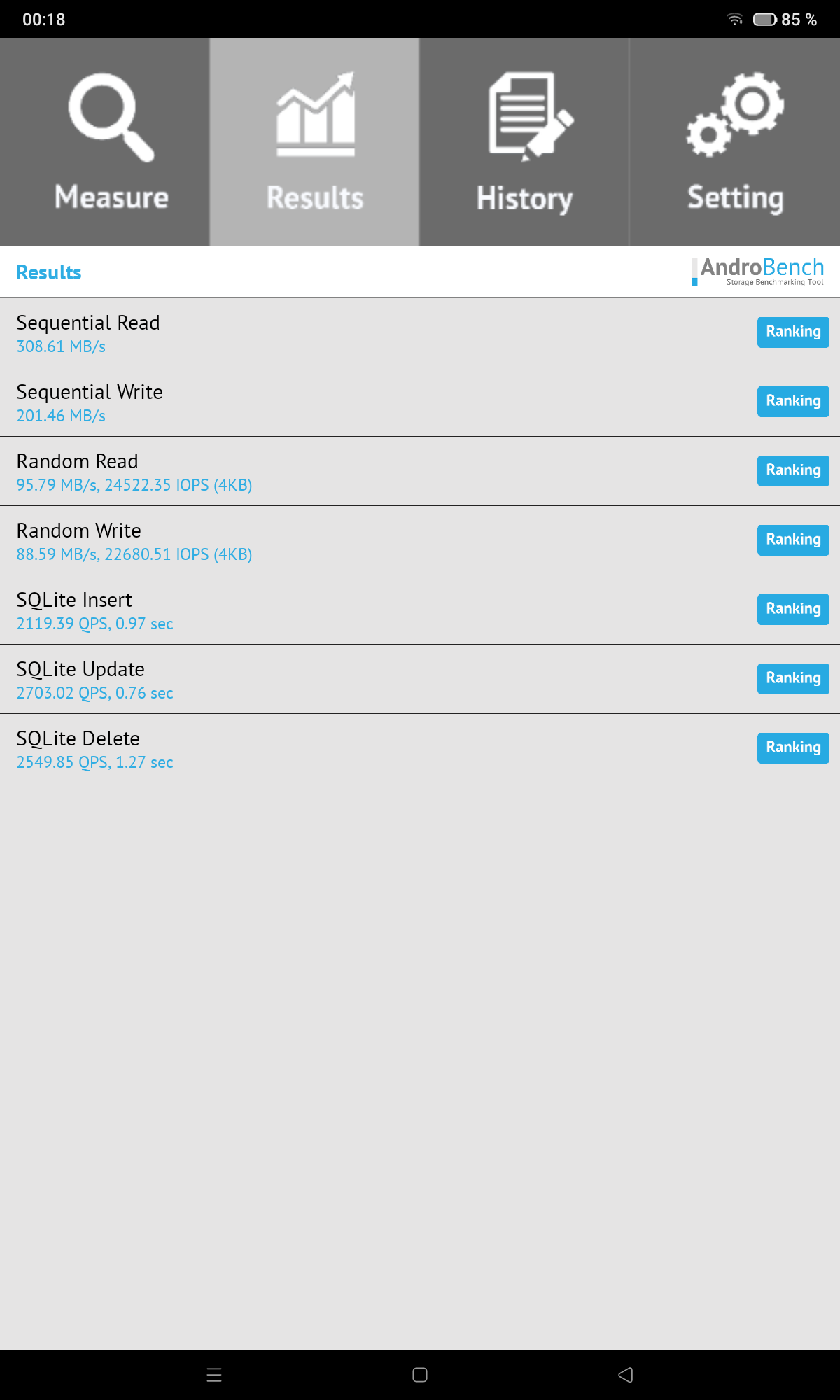 Another bottleneck arises when loading games or installing large apps due to the slow eMMC storage. With data rates of 308 MB / s reading and 201 MB / s writing, the Realme Pad is on a class level, but it has to admit defeat to a Xiaomi Pad 5. The LPDDR4 RAM in the Realme Pad brings it to almost 12 GB / s and in no way weakens when multitasking.

The main memory is about 60% used in normal operation in our 4 / 64GB version. The storage space was already full with the most necessary apps, including benchmarks and a few games, and only 19GB remained. However, it can be expanded by up to 1TB using a microSD card.

The performance is not on the same level as smartphones in the same price range. It often happens that one or the other jerk creeps in practice. For example, when you close an app or switch to the “last used programs,” there is a small moment of remembrance. The somewhat slower performance of a tablet bothers me less than it would be the case with a smartphone.

Since tablets are often used for games, the Helio G80 is not the most powerful chip on paper or benchmarks, but Android games are not as resource-hungry as current PC games.

We don’t have to say a lot about the cameras in the Realme Pad: It’s great that it’s onboard and can be used for video calls with just about sufficient image quality. Both front and rear, we have sensors with a resolution of 8 megapixels that allow videos with 1080p / 30fps. 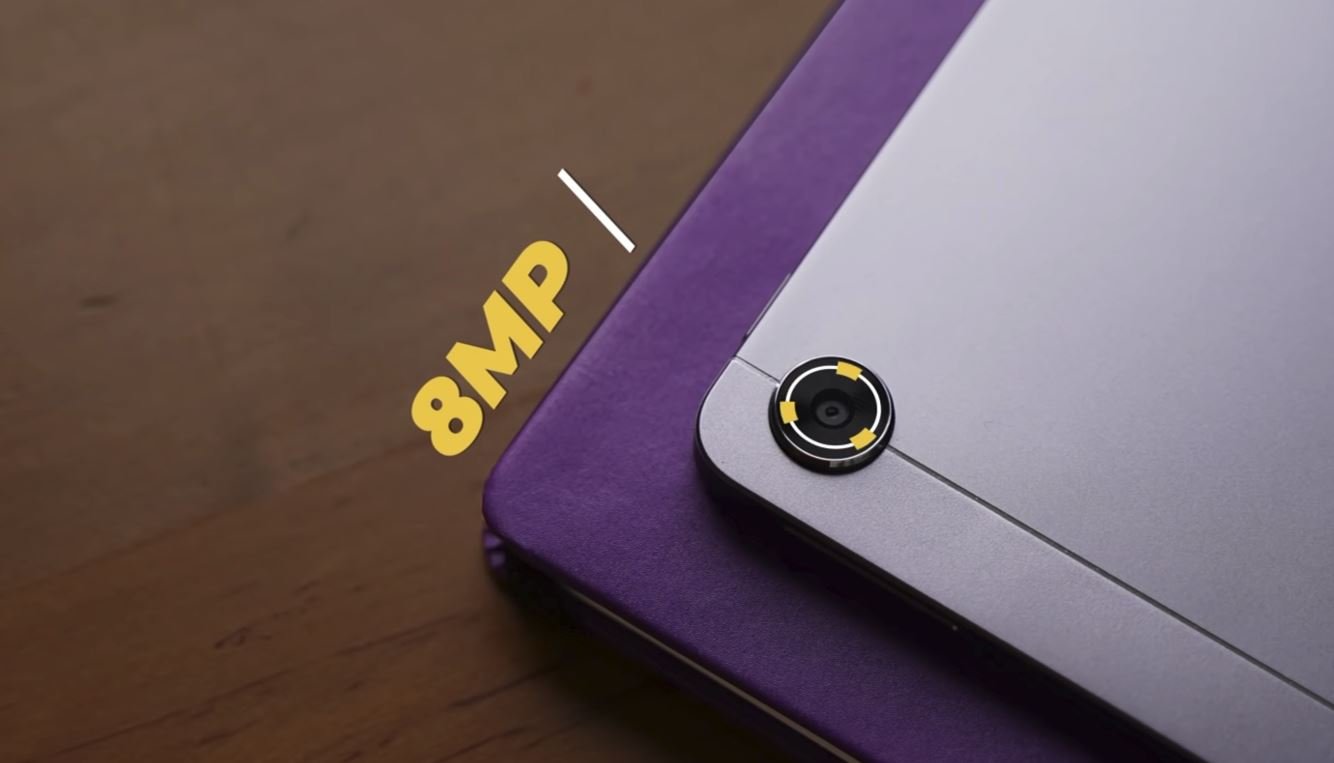 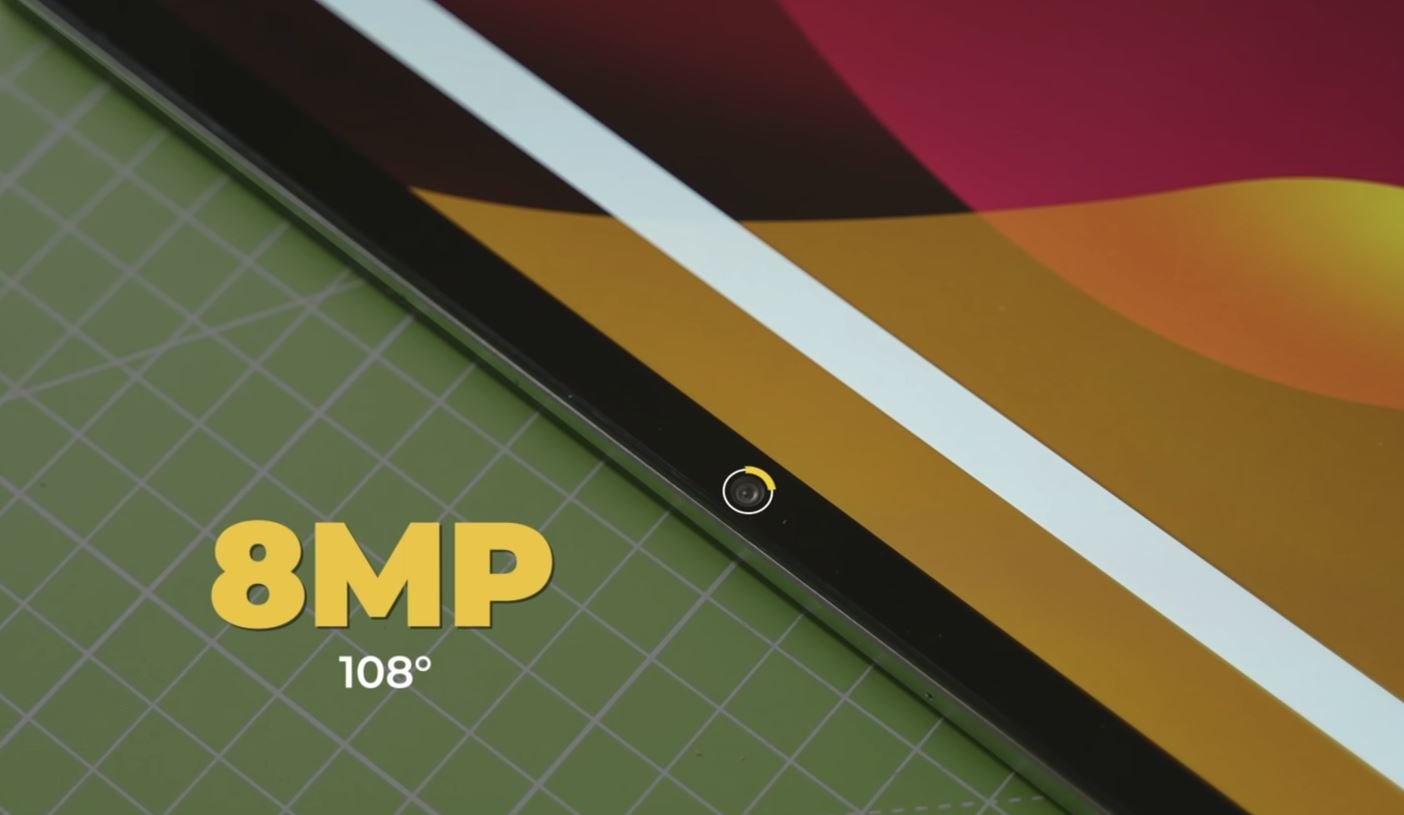 With the Helio G80 as the basis, the latest connectivity standards are not supported, but the most important thing is on board. 4G is also mentioned as an optional feature on the Realme website. Our Realme Pad with WiFi only already has a slot: All you can do is insert a MicroSD card for storage expansion (up to 1TB). The space for the nano-SIM card can still be seen but cannot be used. 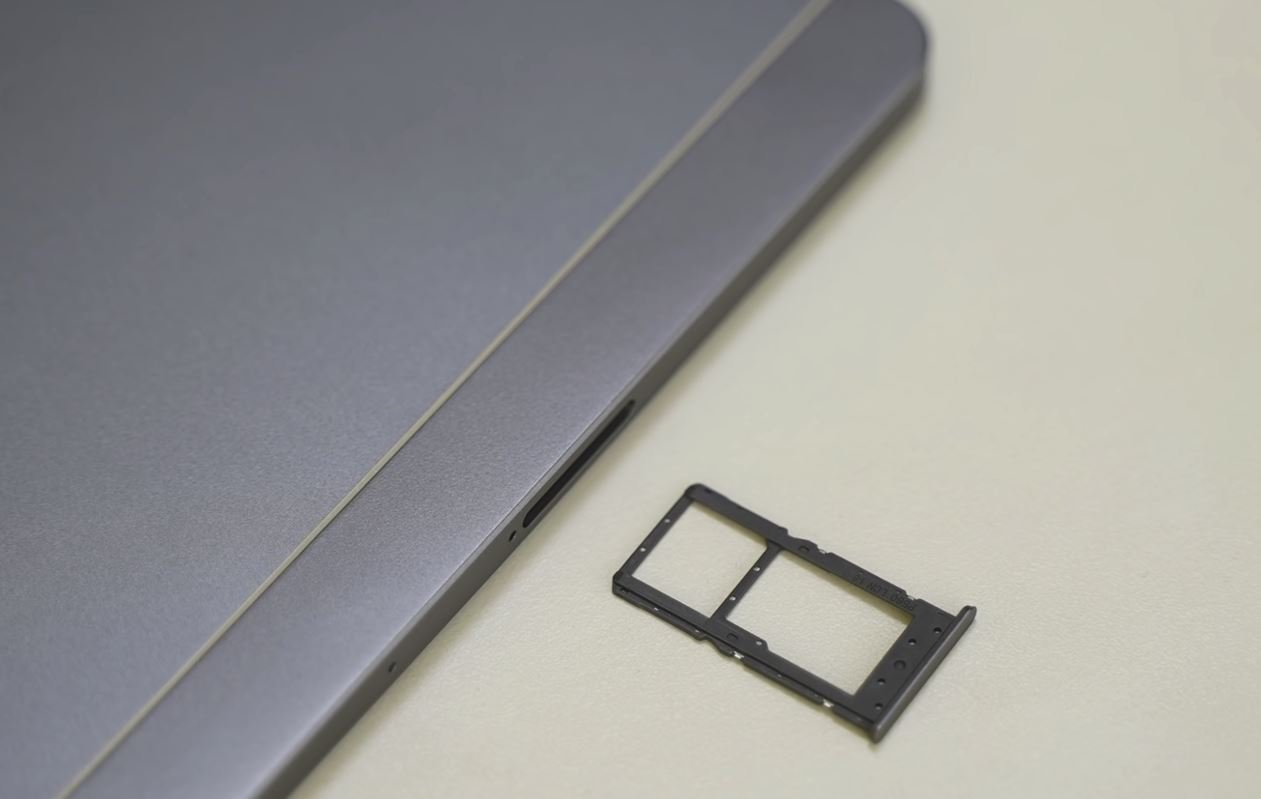 The Realme Pad still maintains the connection to the 5 GHz network. The practical test was about as strong as a Huawei MateBook X Pro.

The Realme Pad connects wirelessly to other devices via Bluetooth 5.0. The automatic coupling works reliably, the connection is stable, and the Realme Pad supports Qualcomm’s audio codec aptX. The Realme Pad can determine the location via GPS. The services GPS, A-GPS, BeiDou, and Glonass, are used for this. The location could also be determined precisely in the building. An e-compass is missing, however.

The built-in sensors include a light sensor for automatic brightness regulation, acceleration sensor, gyroscope, and a Hall sensor for protective covers with “lids” or folding cases with stand-up function. Realme does without a fingerprint sensor. But you can wake up the display by double-tapping and setting up Face Unlock via the front camera. So you land on the home screen in less than a second.

Realme installs real quad speakers: The individual speakers can be found in all four corners and have a nice wide cutout in the metal frame. The sound is my highlight of the Realme Pad! Regardless of the Dolby Atmos and Hi-Res Audio certification, the four speakers sound first class. Real stereo sound comes up with the placement, and the richness of sound creates the “right in the middle” feeling. As always, the bass is a bit difficult with such small bodies, but the deep tones at least don’t sound like the bottleneck in the overall impression with the Realme Pad. In my opinion, 30% of the overall volume is easy enough to enjoy a film on Netflix or a YouTube video. 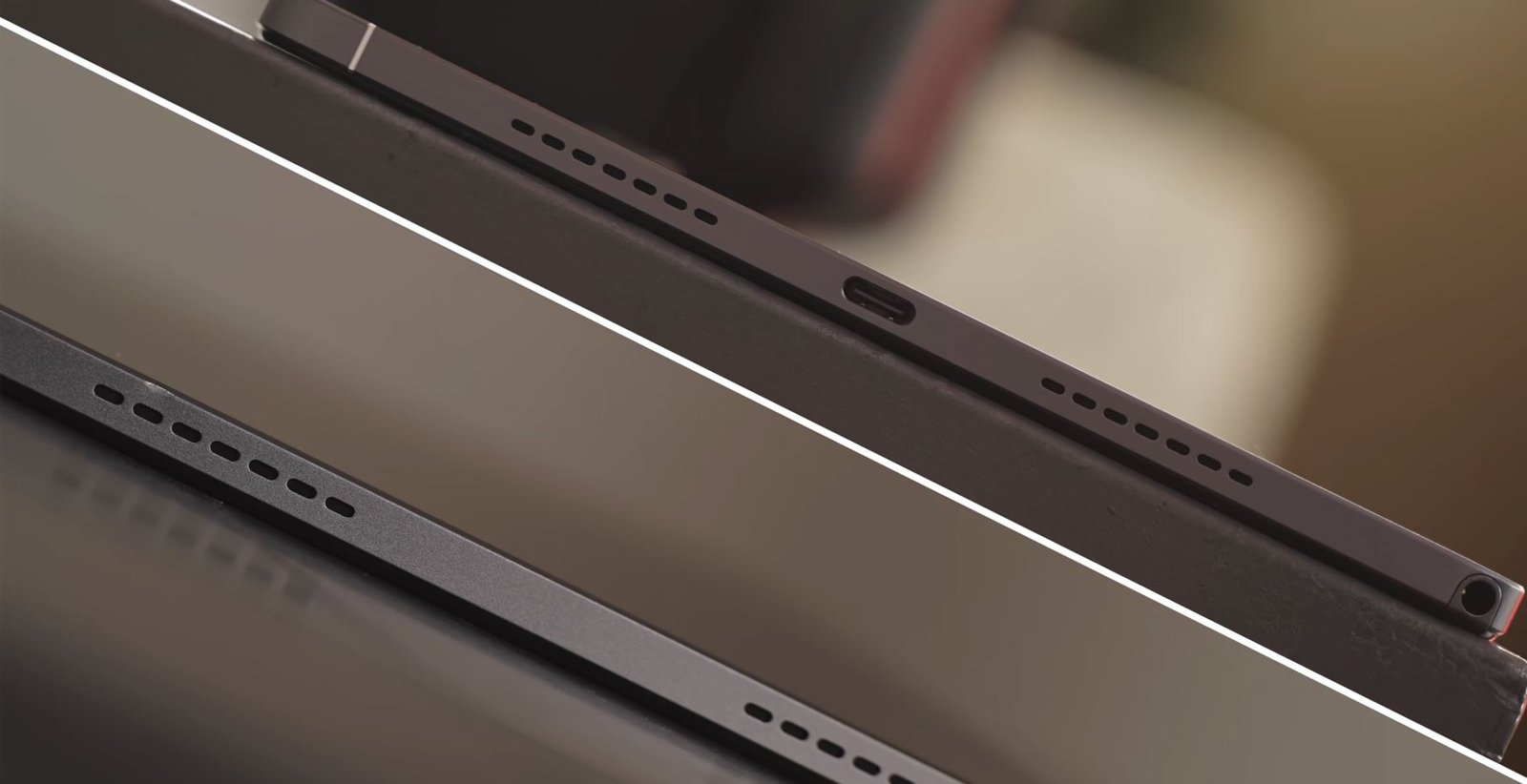 The manufacturer installs a 7100mAh battery in the Realme Pad. The Realme Pad lasted 11 hours and 55 minutes in the PCMark Benchmark 3.0 (calibrated to 200 lux screen brightness). This is a good value for the 7100mAh battery. If the hardware of the Realme Pad is challenged, the battery drains accordingly faster. Using the Realme Pad for simple tasks such as reading e-mails and news, social media, and video streaming, around 7 hours of display-on-time (active usage time) are possible in one day.

The Realme Pad is charged with the included USB-A power supply unit with up to 18 watts. The charging speed is staggered as follows: in 20 minutes it goes from 1% to 15%, after 50 minutes it was just 35%, and after an hour and a half it was only 60%. A full charge with the 18-watt power supply takes 2 hours and 50 minutes.

The Realme Pad is a solid tablet that can be used for entertainment. The four loudspeakers are a highlight. The computing power is sufficient for general use, but it is also no better than the competition. The battery life and the available equipment are also good. However, it is disappointing that “Realme UI for Pad” has nothing to do with the Realme UI known from smartphones but is just stock Android with a few extensions.

The Realme Pad and offers comparable features with LTE and AMOLED display. The Realme Pad brings a unique selling point with its well-known manufacturer in the background and, therefore, probably better update support. In addition, the Realme Pad with Widevine L1 allows you to watch Netflix and Amazon Prime in full resolution.