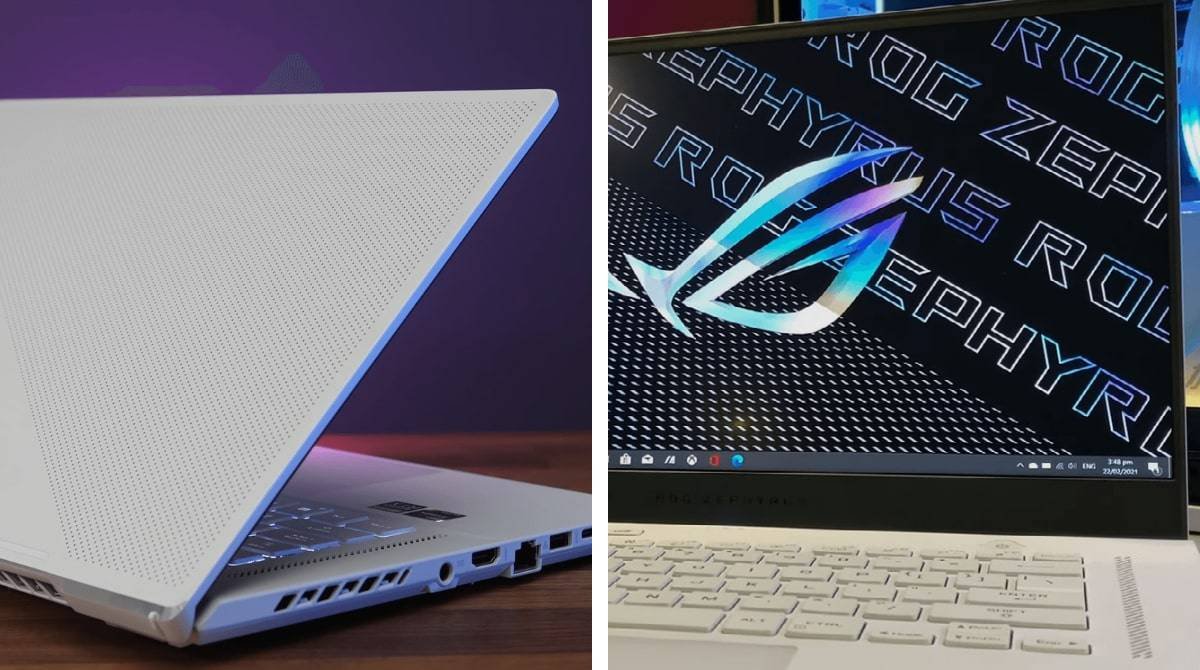 The new ROG laptop is equipped with AMD’s new processor and a new graphics card from Nvidia. This is a heavy gaming computer that is also suitable for other chores. Two important computer news have recently been launched.

The first is a new generation of mobile performance processors from AMD, the Ryzen 5000 series. The other news is the laptop version of Nvidia’s new graphics card, the RTX 3000 series. The ROG Zephyrus G15 from Asus has been gifted with compelling versions of both of these.

When a maxed gaming computer meant a several centimeters thick trailing story seems to be over, many thanks to Nvidia’s investment in the compact Maxq design for computer graphics cards in laptops. 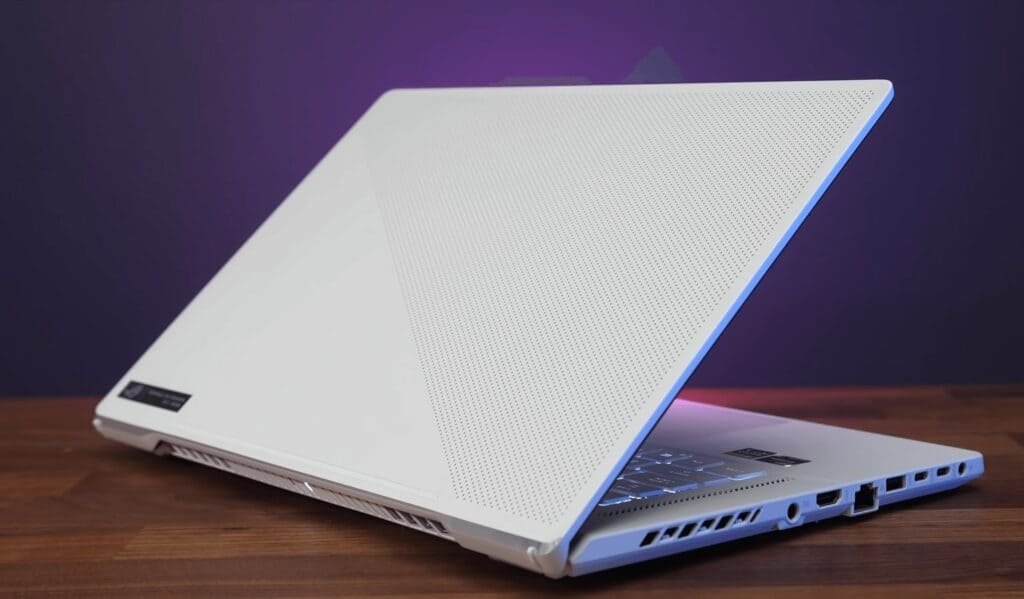 This is a 15-inch computer with tight straight lines that lack neon-screaming gaming aesthetics. The only thing that suggests a gaming computer is the solid fan grilles on the sides. The chassis is built in a combination of hard plastic and light metal, weighs just under two kilos, and is two centimeters thick.

A pair of sturdy rubber feet on the underside gives the computer a good airflow for the fans. 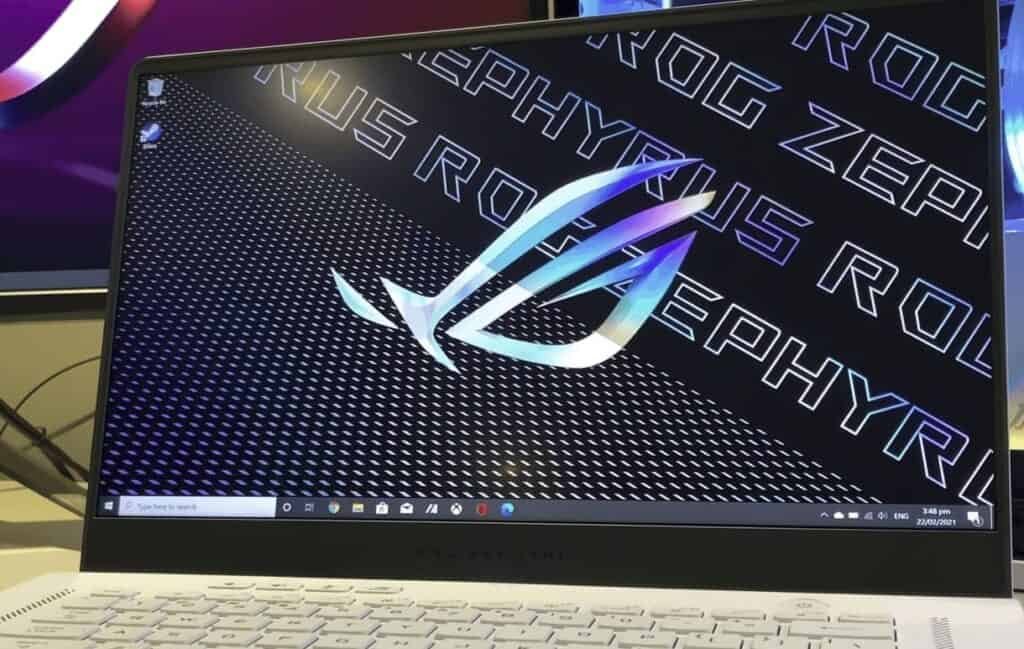 The monitor is a bit of a trendy too. The resolution is 1440p, something we have long demanded game screens, which previously took the step from 1080p up to unnecessarily high-resolution 4k. An intermediate step in resolution means that good graphics cards are included and can deliver a high frame rate while you get a sharper image.

It is also an excellent screen for other than games. It has high contrast color gamut that, according to the specifications, should match the DCI p3 standard and also provides full RGB support, Pantone-validated color accuracy, and some support for hdr video. However, the screen is not extremely bright, so it is doubtful how much can be squeezed out.

You also get excellent sound from the built-in speakers, which deliver real pressure and weight with excellent balance and clarity. With Dolby Atmos support and good opportunities to adapt the sound and generate the right surround feeling in games and movies, we can only give a full rating when it comes to sound. 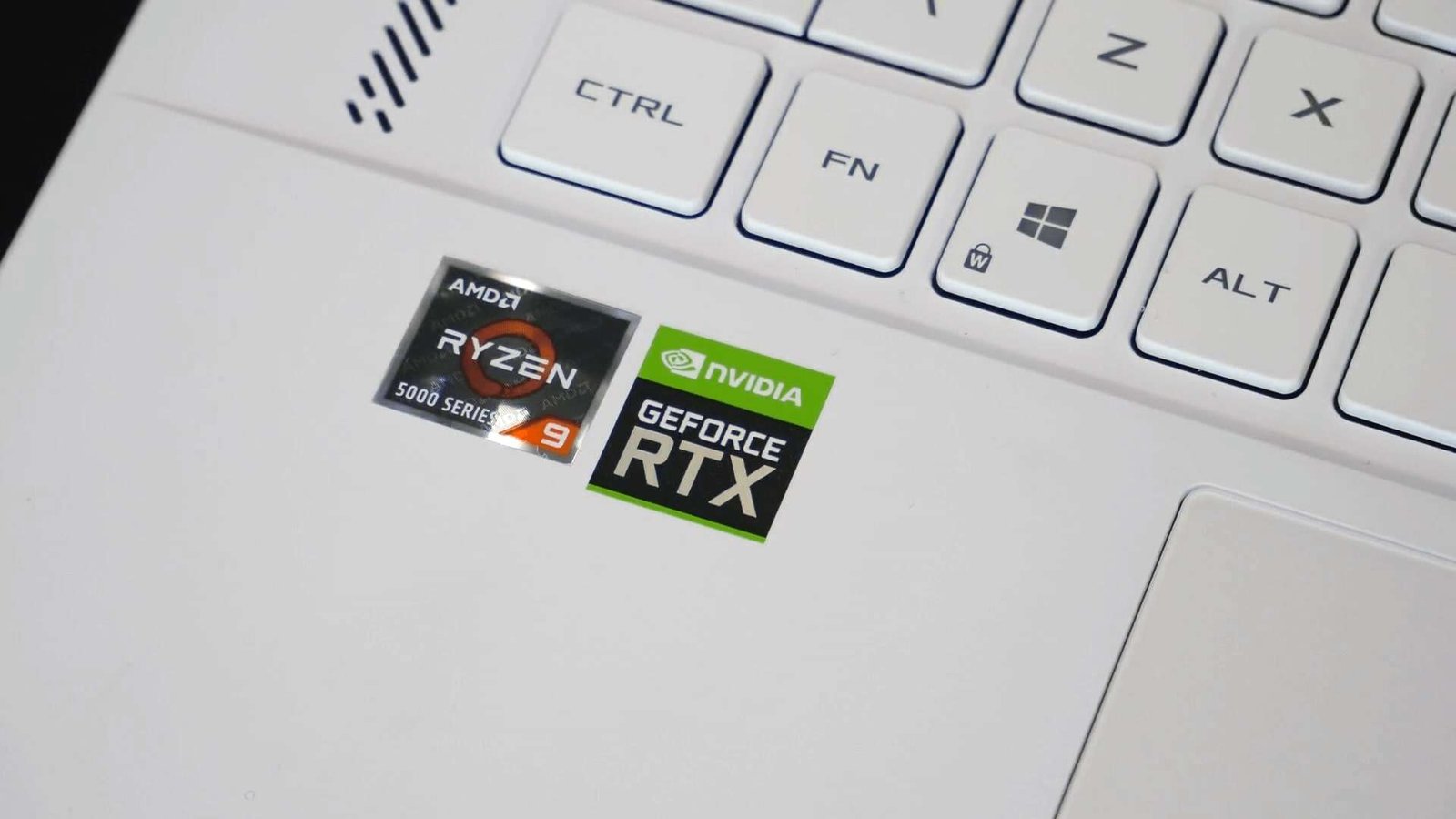 However, to take full advantage of the computer’s performance, it should be plug into the wall with the supplied power adapter. Otherwise, it will not reach its highest performance level. This is a computer you get to drive really hard. Otherwise, there is no point with it. The processor in it is, in short, the most powerful that has been in a laptop we have tested. The new fifth-generation Ryzen, also called Zen 3, is really convincing with its seven-nanometer architecture and smart new features to distribute power between the cores. At least in this type of slightly larger computer that can be equipped with really with cooling.

Here is a Ryzen 9 5900HS with eight cores with a high bass frequency and even higher boost frequency. This computer gives a boost of between 15 and 25 percent compared to that processor’s performance.

There seem to be large margins for performance topping with efficient cooling; we can state that Asus has succeeded well on that point. Even during long stress tests, it keeps performance at a peak, even if the fans work hard. 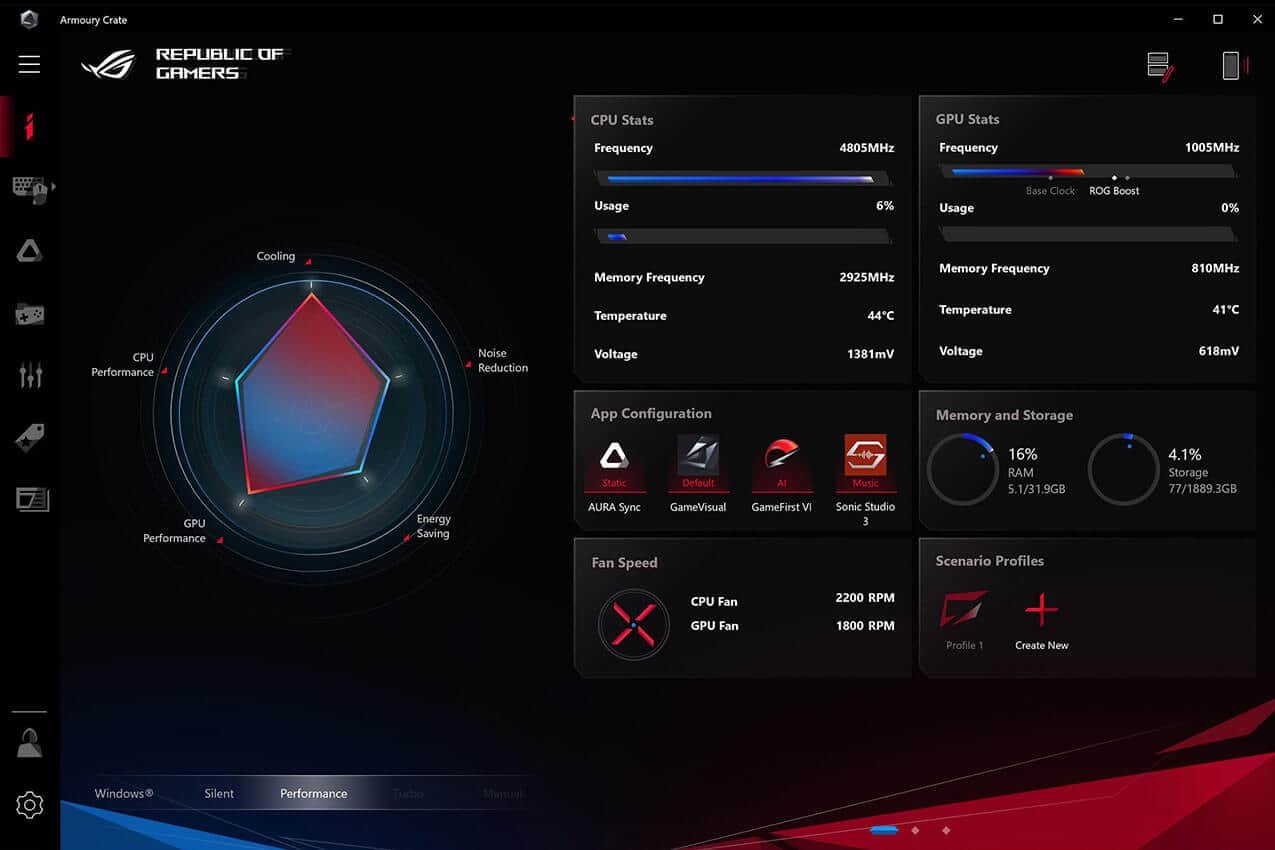 Armory Crate is mostly easy to use and navigate. It gives you lots of great tools for optimizing performance and customizing your computer.

If we put the computer in a “quiet” mode in Armory Crate, we can prevent heavy fan noise and unnecessary heat generation. For long periods, it then runs completely fanless. But then only a fraction of the computer power is used.

This is best for a gaming computer, but its monitor’s performance is a bit overambitious. You may also need to plug in an external keyboard and mouse to avoid scalding your fingertips during an extended game session.

The versatile screen combines fast response and high frequency with 1440p resolution and fine color properties, also makes it an excellent computer for media creators. Even there, comfort can suffer if you work intensively for longer periods. But if you spend more than 3,392 USD on a laptop, you can add a little to get a good docking solution for the desktop.

Many different computer models are released, with the same modern generation of hardware, but not with the most maxed-out versions of the graphics card and processor. They may be worth looking into as cheaper and hopefully a little cooler alternatives. We have also not seen what other manufacturers do with this generation of CPUs and graphics. We are waiting with excitement for what we will see. 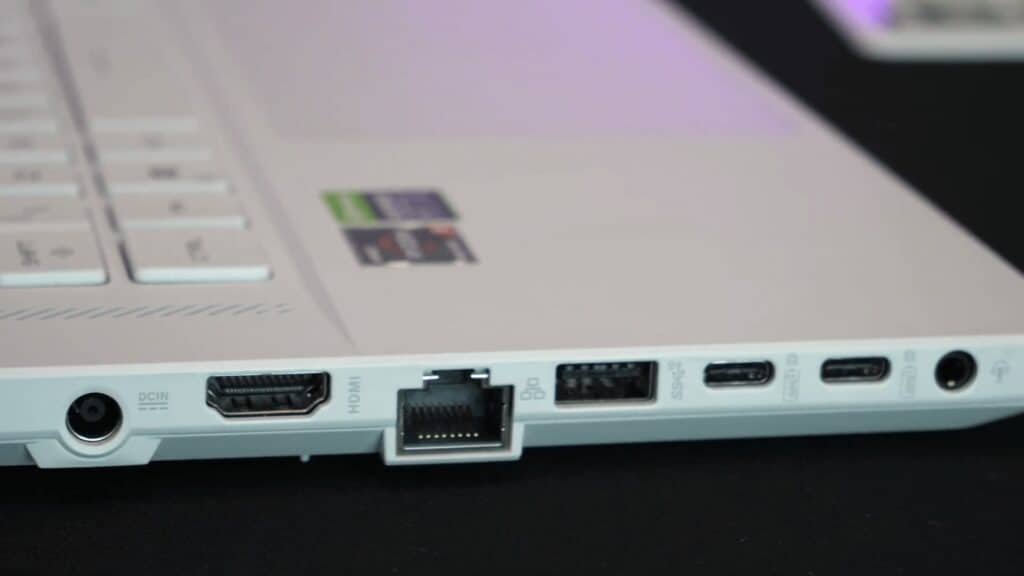 On the sides, the fan exhaust is crowded with a set of fast USB ports, network port, HDMI, headphone port, and a micro sd card reader: all four USB ports, two type a and two type c, support 10-gigabit speeds. The USB c ports also support Displayport. You do not get the full thunderbolt function here. But what PCI express in Thunderbolt 3 is most often used for is external graphics cards. And you will not need it for this computer.

For some reason, it has no webcam. It feels like a strange thing to remove in this Zoom era we now live in. Especially for a gaming laptop that many can imagine streaming with. Not everyone is a Twitch professional and wants to mess with separate cameras.

The computer has a large mouse pad in matt glass and a high-quality keyboard with good stroke height, buttons’ failure, and powerful backlighting. It is not overly compact, but we would have liked to see some things such as arrow keys get more space. 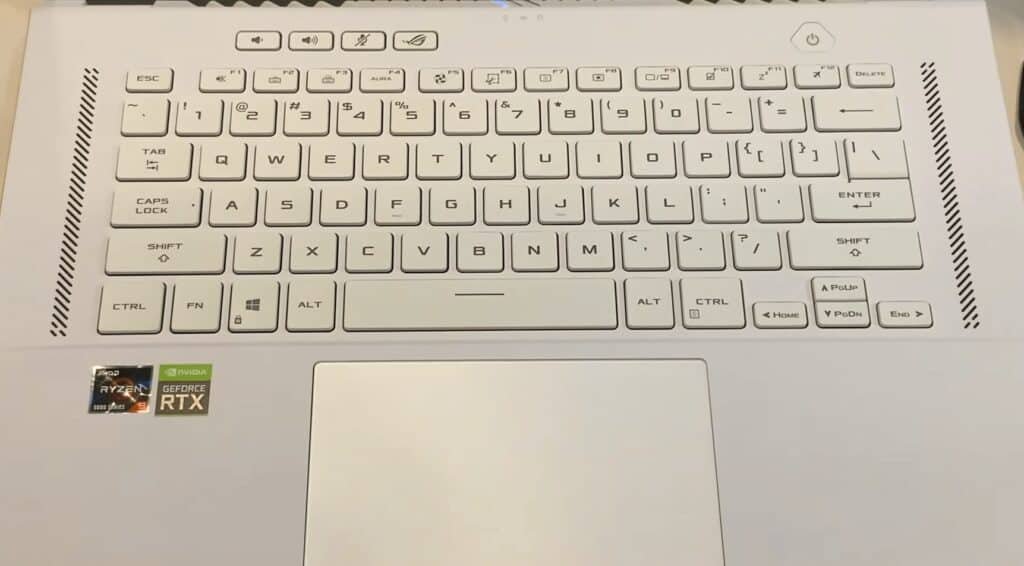 The keyboard does not have RGB lighting, which distinguishes it from other gaming computers in this price range, but you can still set two different monochrome light effects if you want. A small row above the keyboard contains volume controls and a hotkey that launches Asus’ central Armory Crate setup program.

In it, we get control of many aspects of the computer. Performance and cooling control for the powerful hardware, more detailed control of the backlight in the keyboard, control for the screen in color reproduction, refresh rate and response time, noise reduction for connected microphones, and a handful of other features. The screen can be convenient to set in easier mode if you do not want to play games and extend the battery life.

Battery life is no more than moderate. Up to about a working day of gentle browsing with the 60 Hz screen and low brightness, is what it can handle. Or as little as an hour if you play demanding games. It’s not bad for this type of computer, but worth remembering if you are used to more mobile laptops.

It is impressive how can accommodate much computing power in a slim chassis. Both the new Ryzen processor and the RTX graphics card get to show what they stand for. This is also a, surprisingly, flexible computer for other than games. Given the format, the format has panting fans and uncomfortably warm surfaces in the barrel, but it isn’t easy to avoid. We have to wait with top marks until we see if other manufacturers solve it better.