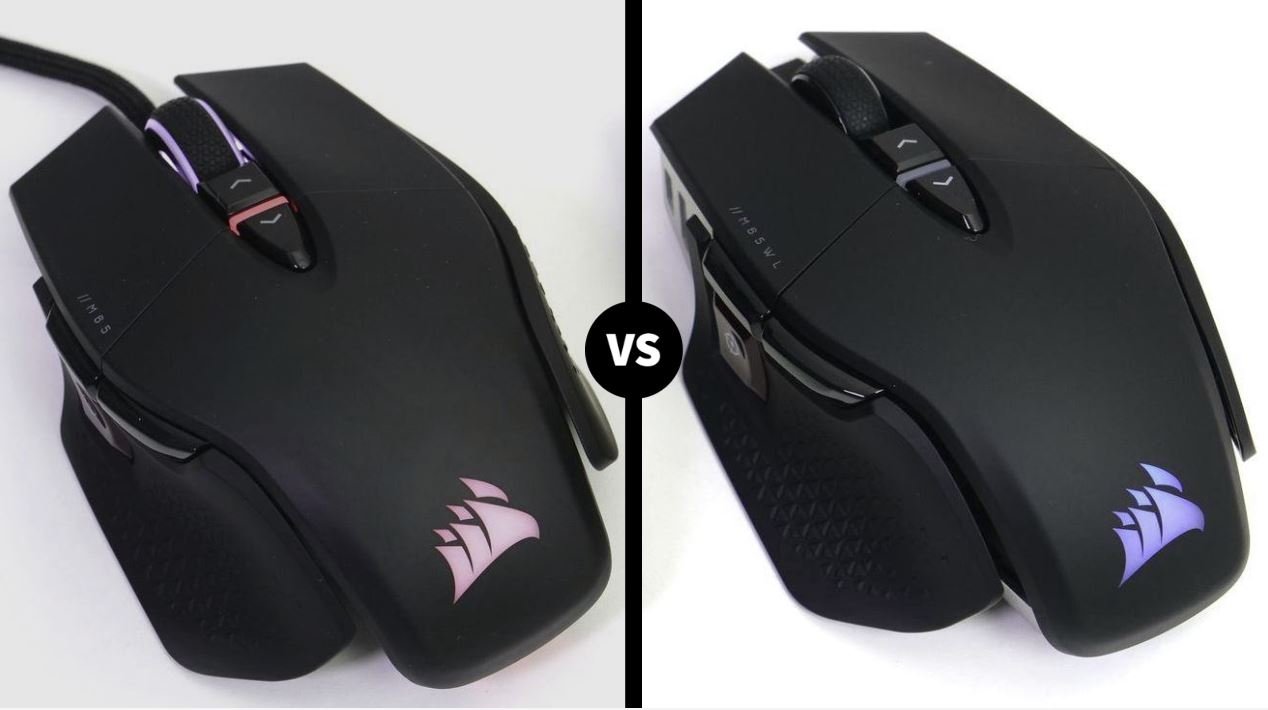 Both models are equipped with Corsair Marksman optical sensors (DPI 26000, IPS 650, 50G acceleration) that provide exceptionally high accuracy even with jerky movements. The main buttons of the Corsair Quickstrike are based on Omron switches and should guarantee instant response when pressed and, at the same time, high reliability. 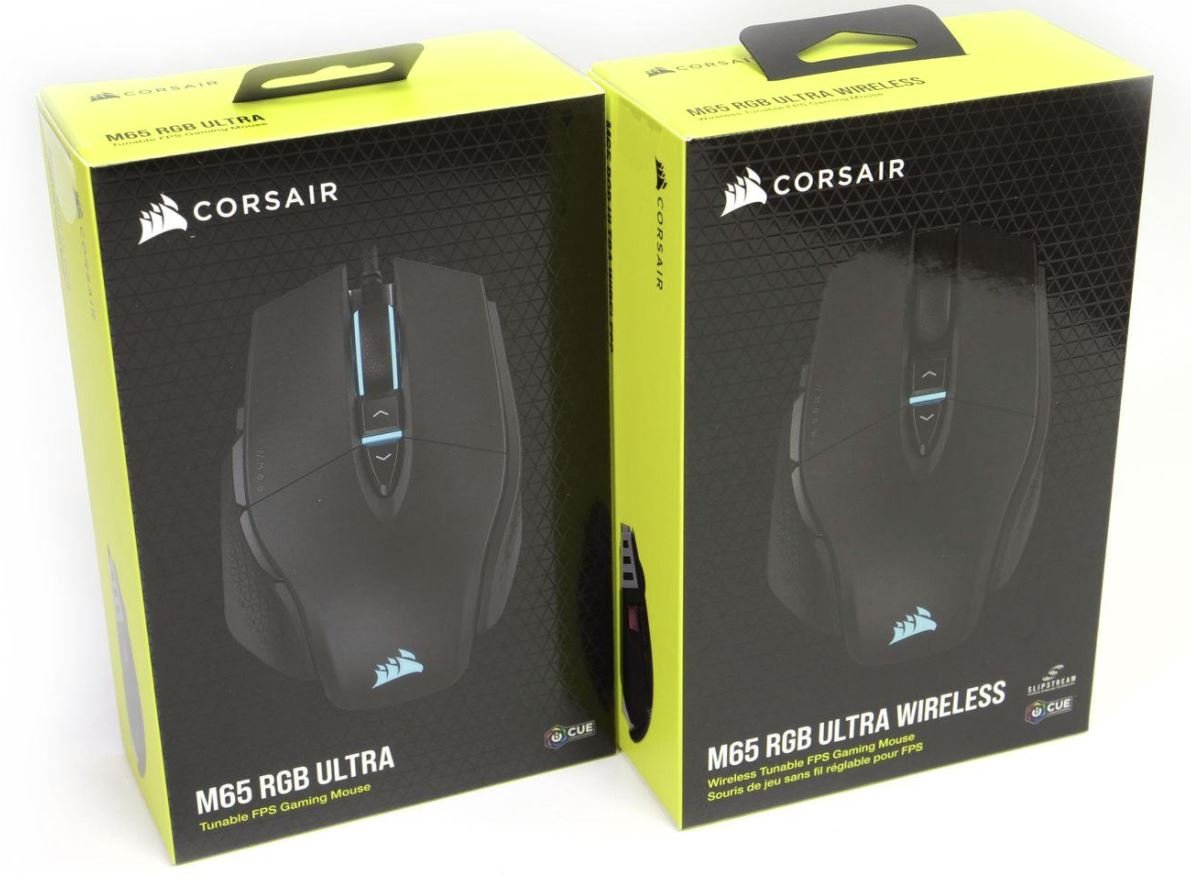 The Corsair M65 RGB Ultra mouse wired is well made and robustly built; it comes in a high-quality-looking aluminum housing. Overall, it’s one of the heavier models on the market; that’s a matter of taste. The actual weight is just under 100 grams, which can even be supplemented with additional weights.

In terms of the built-in technology, there is nothing to complain about. The high-quality Omron optical switches are pleasantly responsive and quiet. The Marksman sensor works with a maximum resolution of 26,000 DPI and does its job reliably. As usual for gaming mice, there are numerous adjustment options for tilt gestures, surface calibration, and lighting elements.

All keys are also individually programmable. If you are bothered by the wired connection, in addition to the standard model, Corsair has also released a wireless version of this model that performs similarly well.

The Corsair M65 RGB Ultra Wireless presents a new gaming mouse for around 130 USD. The aluminum housing leaves a high-quality and robust impression, weighs in at 110 grams, and can, if preferred, be adjusted even further thanks to the weight system. The mouse can be connected wirelessly to radio and Bluetooth and impresses its long battery life.

Handling is comfortable despite the weight, and the gliding properties are suitable. The built-in Marksman sensor with a maximum resolution of 26,000 DPI is precise and reliable, and the optical Omron switches are also convincing. Various settings can also be made using software, including options for tilt gestures, surface calibration, and RGB lighting.

If you don’t value wireless operation: Corsair also has a cable version of the mouse in its portfolio. This one is a bit lighter comes with a higher polling rate and more illumination. 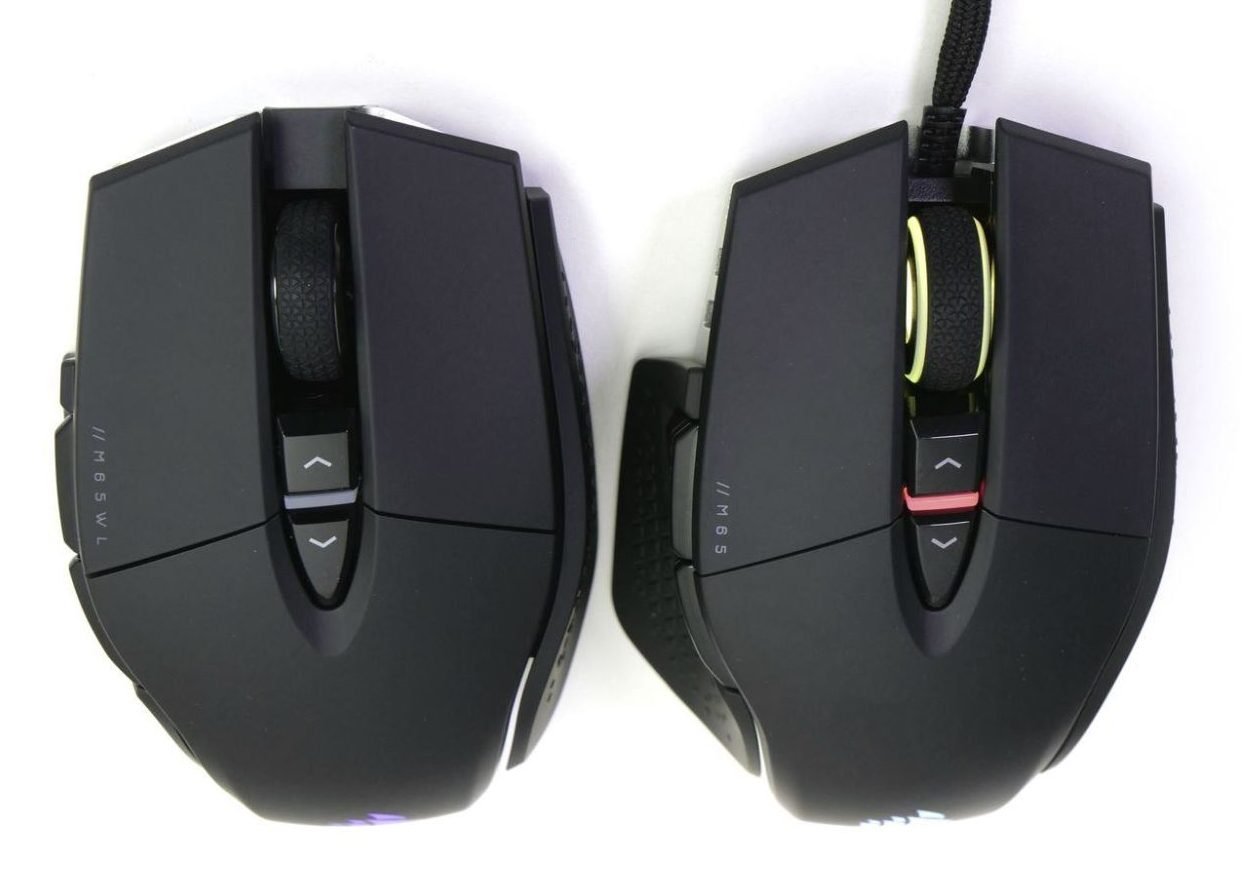 Metal elements are hard to find even in many more expensive models from various brands, but not in the Corsair M65 RGB Ultra and Wireless. Both devices feature a solid aluminum frame, which should come as no surprise to enthusiasts of the brand. The company emphasizes that the mouse can be controlled with the whole hand or fingertips, depending on user preferences.

Both mice use a Corsair Marksman sensor with a resolution of up to 26,000 DPI, developed with PixArt. As with the Saber RGB Pro Wireless, this sensor performed well in intense gaming battles and tense situations, accurately conveying movement into the game. On the other hand, extremely high DPI values ​​are hardly attractive in practice. The four PTFE feet on the bottom ensure good glide despite the relatively high weight. If necessary, additional weights can be installed from below. But given the considerable weight of the mouse, they will be helpful to a few users. The wireless model has a toggle switch on the bottom to select the type of connection or turn off the mouse.

The two models differ significantly in the USB polling rate. Subjectively, we could not detect any differences between 8.000 and 2.000 Hz. The same goes for USB or Slipstream Wireless connectivity: even in direct comparison, we couldn’t find any advantage of the M65 RGB Ultra over the M65 RGB Ultra Wireless. However, a bit of concern was that the wireless model often disappeared from iCUE but continued to work. But the problem will indeed be solved with an iCUE update. You will have to get used to the unusual shape of the mouse and the new optical switches – they do not have the clear tactile feedback that the mechanics have. Optical switches are not only more durable but also very quiet. 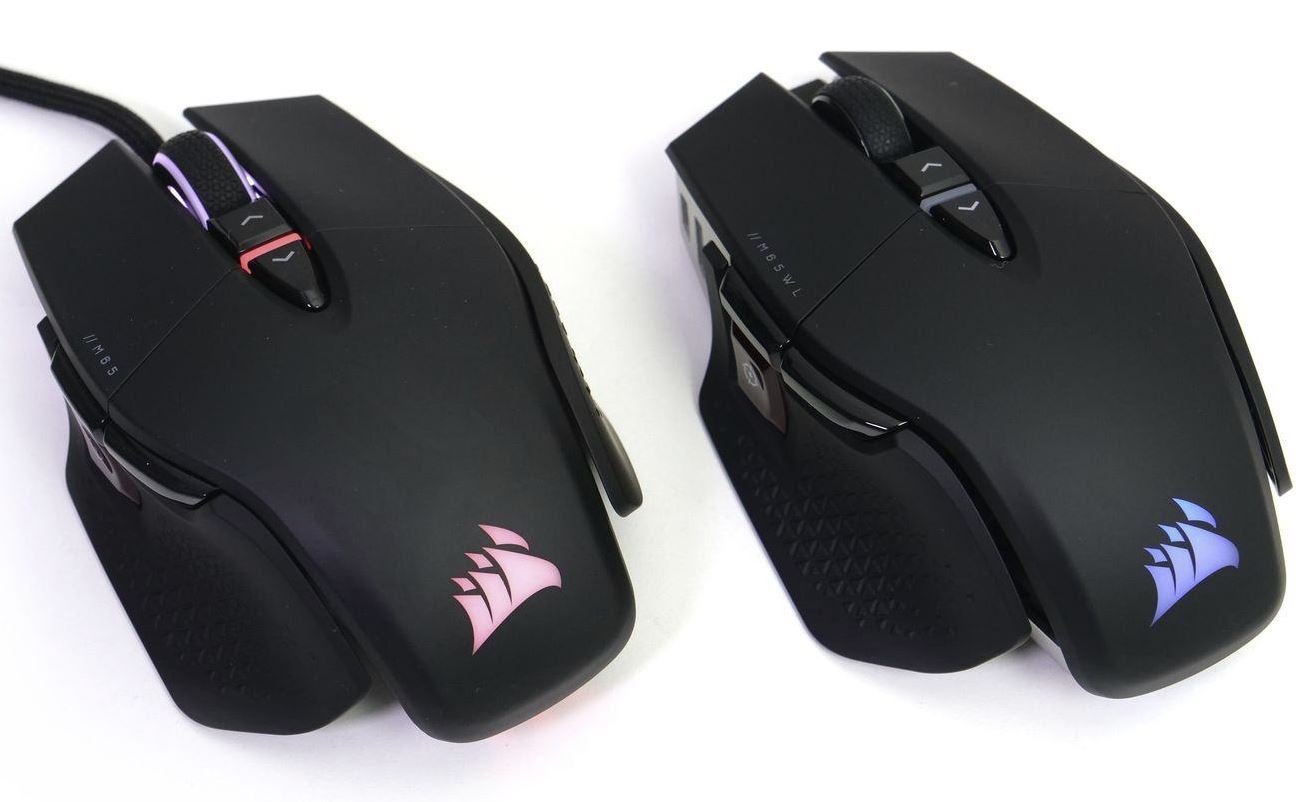 The Corsair M65 RGB Ultra and Wireless devices have been equipped with an unusual new Sensor Fusion. It is based on a six-axis gyroscope and accelerometer. The sensors can immediately pick up when the mouse is raised, even at a shallow height, thus avoiding the transmission of random movements. This is not unusual, but the sensory complex has a second, more effective use.

Thanks to the Corsair iCue software, you can program specific simple wrist movements to be read as the activation of predefined actions based on certain macro gestures (such as reloading a weapon). The possibilities of Corsair iCue software are even more comprehensive. It allows you to control RGB lighting, change buttons, create macros, or save profiles to the mouse’s built-in memory.

Moreover, the wireless option boasts a hybrid connection method. Dedicated Slipstream Wireless 2.4GHz USB receiver or via Bluetooth 4.2. The manufacturer claims that the signal can be transmitted over a distance of up to 18 meters, and the built-in battery lasts up to 120 hours to charge it once every few days.

Corsair has successfully expanded the M65 lineup with a new flagship model and introduced the M65 wireless mouse. The new models differ not only in the updated sensor but also in other optimizations.

New optical switches under the main buttons should last longer than the mechanics, which fits in well with the M65’s rugged, aluminum-framed design. The new switches are also very quiet. Innovations include new tilt gestures, which are recognized as four additional buttons. Judging by our impressions, they worked reliably. But in fast-paced games, users are unlikely to want to tilt the mouse during battle. For example, a similar function is still more useful for everyday work and media management. Corsair’s updated sensor has taken the M65 RGB Ultra mice to the modern level, although this improvement over the same M65 RGB Elite, for example, is more of a marketing nature.

Some users will complain about the considerable weight of the mice. Many modern models weigh only 70g, which is quite convenient for the same first-person shooters, but even the wired M65 RGB Ultra weighs about 100g. The M65 RGB Ultra Wireless is even heavier, and this is not the only drawback compared to the M65 RGB Ultra. But the rest of the complaints are not so critical: a lower polling frequency is unlikely to lead to any problems. Yes, and less intense and catchy illumination does not bother us either.

The detachable M65 RGB Ultra Wireless cable is simpler and more challenging. But thanks to the long battery life, you won’t need it as often. However, the cable will need to be connected for activities like writing a hardware profile or updating the firmware. Between the two options, we would prefer a wireless mouse. Yet the wireless freedom outweighs the few disadvantages. On the other hand, the M65 RGB Ultra Wireless is more expensive than the wired model. Therefore, the usual M65 RGB Ultra is still more profitable.

Corsair M65 RGB Ultra and M65 RGB Ultra Wireless are exciting and compelling high-end mice with innovation. If you like the shape of the M65, you can safely choose between wired and wireless models. Both receive our technology award.