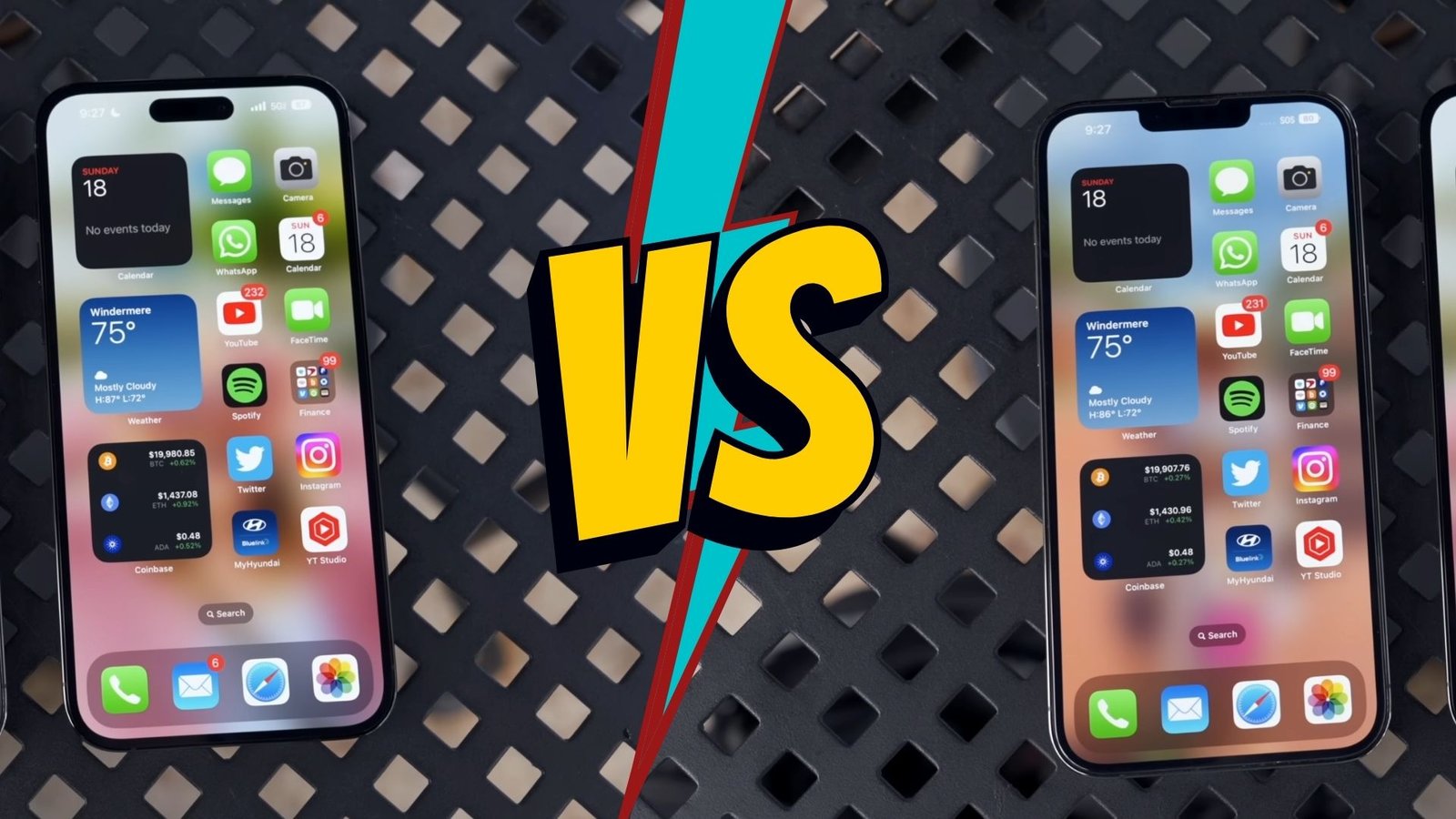 Can’t pick between two iPhones? We’ll help you compare the iPhone 14 Pro with the iPhone 13 Pro. Find out how the new iPhone compares to its predecessor.

Apple unveiled the iPhone 14 and Pro versions. Some were worried about the iPhone 14’s price. Apple has raised the country’s investment requirements. This makes us wonder if the extra expenditure is justified. Do you like the iPhone 14 Pro or the 13 Pro? We’ve compared each model’s design, display, camera, performance, and battery life to help you decide.

When off, the iPhone 14 Pro and 13 Pro may look similar. Apple hasn’t modified the models’ basic design. Both phones have flat displays, stainless steel frames, and matte backs. The iPhone 14 Pro is taller (147.5 mm) and thicker (7.85 mm) than the 13-series Pro. The somewhat larger rear camera element results in a 3 g weight difference (206 vs. 203 g). So, nothing changes.

If you don’t have the iPhone 14 Pro in dark purple or space black, you’ll see Apple’s changes when you turn them on. The iPhone 14 Pro’s notch is gone. Instead of a camera cutout at the top of the screen, there’s a pill-shaped region.

Apple hides camera hardware in this “pill.” This element’s capabilities are outlined below. Smartphones are similarly durable: Both Apple phones are secured against breakage, scratches, moisture, and dust by the front Ceramic Shield and IP68 certification.

Color and front-camera integration should be your design priorities. If you want a modern variety like current Android phones, choose the new Pro model or its big sibling, the iPhone 14 Pro Max, which has the same front cut-out.

Comparing the iPhone 14 Pro and 13 Pro displays, we observe well-known information on paper. In all circumstances, you get a 6.1-inch Super Retina XDR OLED display with 460 ppi and 120 Hz ProMotion. With 2556 x 1179 (vs. 2532 x 1170) pixels, the new generation’s resolution difference is negligible. You benefit from the OLED screens‘ excellent contrast and colour values and smooth animations. Comparing the current Apple smartphone to the 2021 model reveals useful advances.

The iPhone 14 Pro’s always-on display is revolutionary. It can drop the refresh rate to 1 Hz, displaying the time, widgets (iOS 16), and a muted version of your wallpaper.

With the previous, you had to wake up the display to access the same details. A brighter screen also helps. HDR content is up to 1,600 nits brighter than on the iPhone 13 Pro. The iPhone 14 Pro can reach up to 2000 nits for outdoor brightness, but the 13-series doesn’t.

The iPhone 14 Pro’s pill-cutout is also fantastic. Apple’s “Dynamic Island” isn’t just for the camera hardware. With ingenious software methods, the company produced an interactive black bar that shows calls, music players, charge levels, and voice memos. You can utilise the bar to monitor information like the timer, interact with content, or switch apps. The iPhone 13 Pro with the “Notch” doesn’t offer this level of engagement.

If you’ve been waiting for an always-on display or want to use the new Dynamic Island, you’ll need the current iPhone. If you don’t need outside brightness, buy the 13 series. Because the iPhone 13 Pro’s high-contrast and vivid display impressed even the older generation.

Apple improved its camera in 2022. The back camera still has three lenses. If you value photo performance, consider the iPhone 14 Pro. Apple upgraded the wide-angle camera to 48 MP.

The new iPhone 14 Pro camera promises higher resolution, more details, and better low-light performance. This is made possible by the larger sensor and the new Photonic Engine, which adapts the iPhone 14’s image processing.

The front has changed. Both smartphones have 12 MP front cameras. The newer iPhone has a faster f/1.9 aperture (vs. f/2.2) and autofocus, especially in low light.  Apple says the front camera’s low-light performance should have doubled.

When it comes to performance, you don’t have to worry.  Apple has installed high-performance chipsets in iPhones for years, delivering impressive performance in everyday use and games. The iPhone 14 Pro’s A16 Bionic processor follows suit. Apple says it uses 20% less power for high-performance tasks and has more graphics bandwidth.

The iPhone 13 Pro uses the A15 Bionic chipset. The new generation excels at regulating the refresh rate, brightness, and always-on display. Apple doesn’t officially state the working memory, but future teardowns should reveal 6 GB. The iPhone 14 Pro vs. 13 Pro performance race is neck-and-neck.

Apple’s software innovations aim to increase security. Face ID is used for unlocking and payments. With the 14 series, the company has added security features, especially for emergencies. This country’s iPhone 14 (Plus) and 14 Pro have accident detection (Max). It detects an accident and activates the SOS function.

Sending an emergency message via satellite is another innovation. This should help in no-reception situations. The satellite function is currently limited to the US and Canada. Apple may expand the feature to Europe.

Apple is, as usual, silent about the iPhone 14 Pro and 13 Pro batteries. Media and hobbyists disassemble devices to determine battery size. The iPhone 14 Pro will have a 3200 mAh battery, while the iPhone 13 Pro will have 3095 mAh. These numbers rarely indicate a better runtime. More efficient processors, software optimizations, and power-hungry features like an always-on display help.

Apple specifies 23 hours of continuous video playback for the iPhone 14 Pro; the iPhone 13 Pro achieves 22 hours. Streaming (20 hours) and audio (75 hours) remain the same. The difference is likely due to a faster processor. Stamina is similar. Both phones can be charged with a 20 W cable or a 15 W MagSafe charger.

The basic iPhone 14 Pro (128 GB) costs $1099, significantly more than its predecessor at launch. Without a contract, the 128 GB iPhone 13 Pro cost $900. The 14-series Pro iPhone costs $100 more. With outside offers, the older model is cheaper, increasing the price difference. Experience shows you shouldn’t expect a quick Pro price drop. Apple’s smartphones are price-stable.

iPhone 14 Pro or 13 Pro? Our comparison shows that it depends on your preference focus.

The iPhone 13 Pro offers many of the newer device’s features at a lower price. Apple barely improved the processor, battery, and display. You probably won’t notice a difference in daily life. In both cases, you’ll get iOS 16.

The new iPhone 14 Pro may be worth it for camera enthusiasts. Apple upgrades its camera with a 48 MP main sensor and an improved ultra wide angle. The new Dynamic Island front camera concept and always-on display are also good reasons, but partly a matter of taste. If the camera isn’t your main focus or you already have the predecessor, consider the cost. Next generation may offer more.