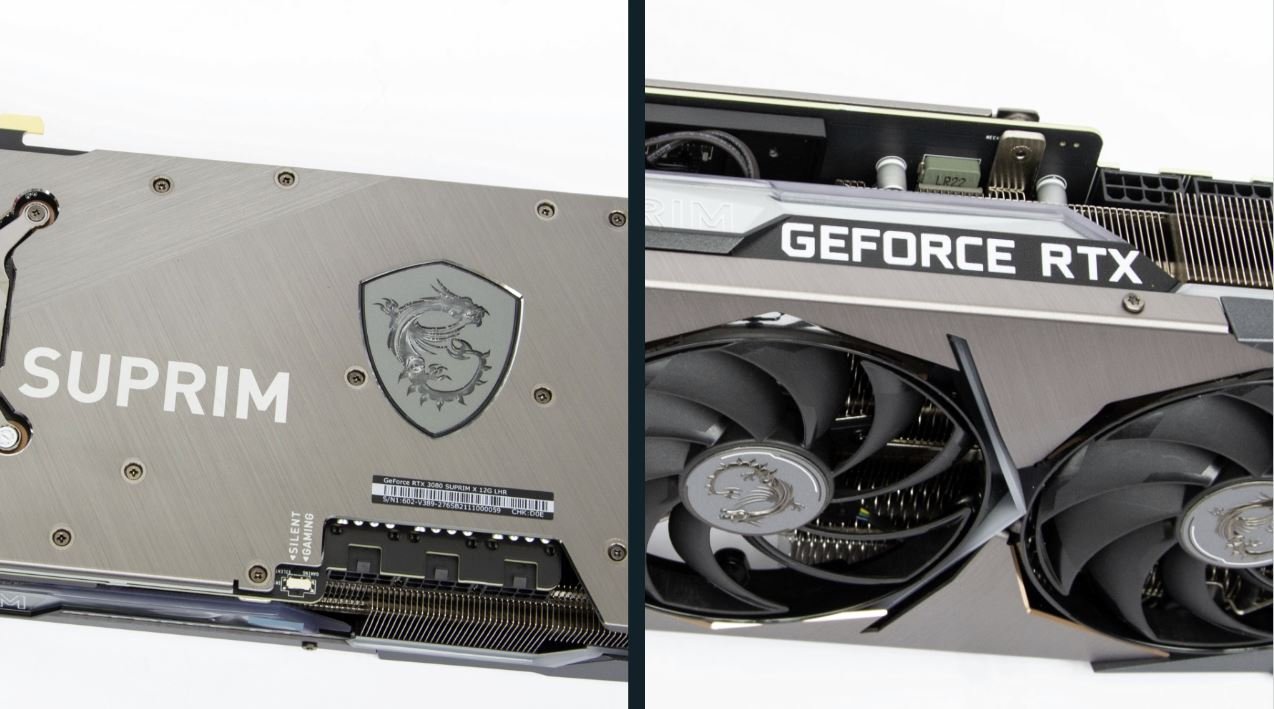 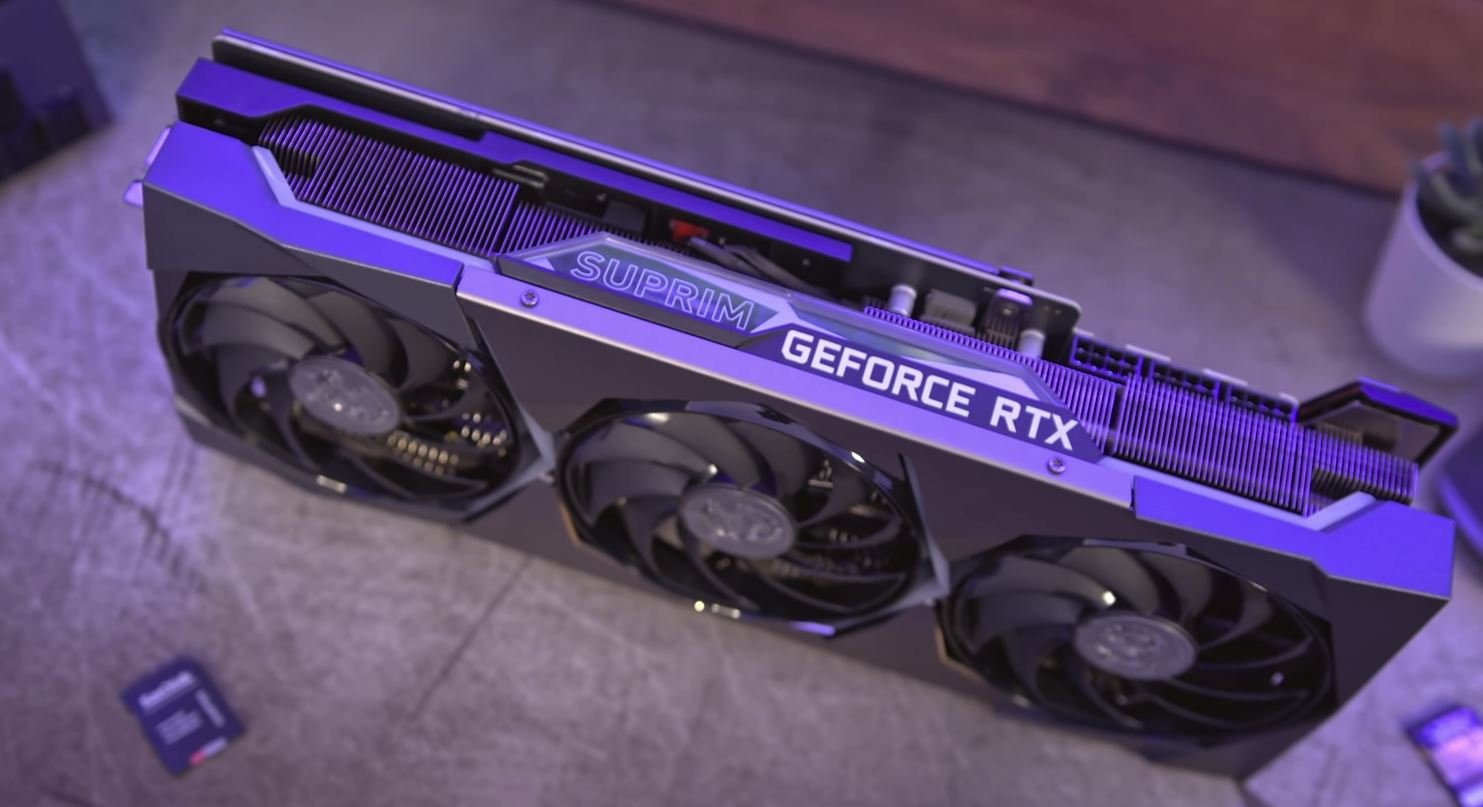 The standard version of the GeForce RTX 3080 has 68 active multiprocessor SM blocks with 8704 stream cores, 272 tensor cores, and 68 RT cores. The memory works on a 320-bit bus; the memory capacity is 10 gigabytes. The new version received 70 active SMs, providing 8960 streaming cores, 280 tensor cores, and 70 RT cores. The memory bus has been expanded to 384 bits, making it possible to install 12 gigabytes of memory. For both variants of the GeForce RTX 3080, identical Boost Clock frequencies are set, but the base value of the new product is lower. GDDR6X memory operates at a data rate of 19000 MHz, which is identical to other variants of the GeForce RTX 3080 series. Nvidia already has a GeForce RTX 3080 Ti with a 384-bit bus and 12 gigabytes of memory in the lineup. The older version wins with a similar memory configuration due to the larger number of computing units.

We will get acquainted with the new product using the top MSI video card from the Suprim line as an example. This model is equipped with a powerful air cooling system and operates at higher frequencies. Let’s compare it with the previous version of MSI GeForce RTX 3080 Suprim, which runs at the same factory frequencies. This will allow you to objectively determine the benefits of the new GPU and memory configuration of the GeForce RTX 3080 12GB.

The video card comes in a large white box with its image on the front. At the top, there is a carrying handle. 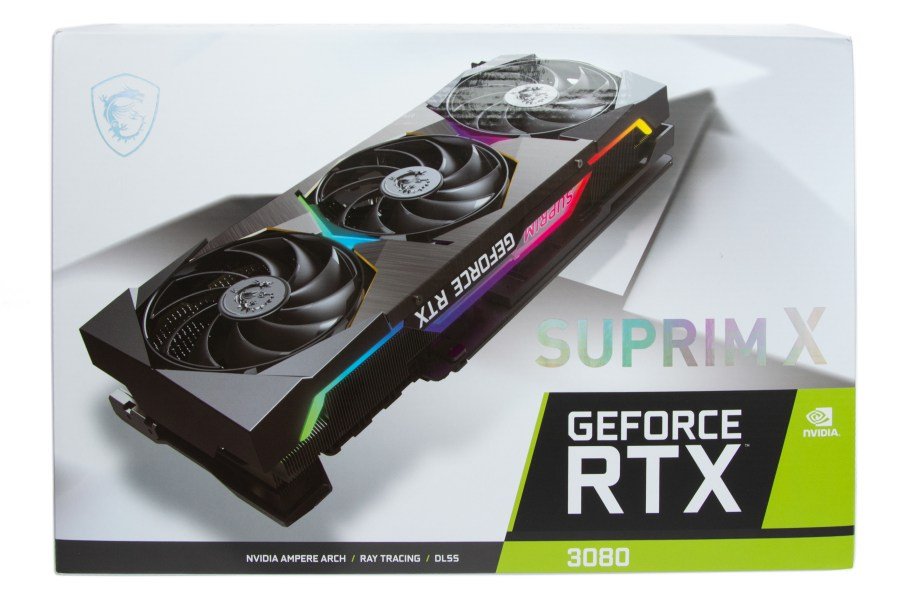 It is worth noting the rich equipment. The box contains a large mat, a set of additional instructions, and other printed matter.

Important addition is the adjustable support. A huge video card weighing a couple of kilograms can bend, which will lead to deformation of the textolite. And although the manufacturer took care of the rigidity of the structure, providing the Suprim with a backplate and a stiffener, additional support minimizes the likelihood of deformation of a bulky product.

The support has a height-adjustable “foot” to support the edge of the graphics card.

Before us is a real graphic monster 32 cm long, which occupies three expansion slots. There is a certain continuity with MSI Gaming in the external design, but Suprim looks more elegant.

The massive radiator is covered with a plastic casing with a metal insert in the center. Fans fit into octagonal holes. Arrow-shaped body elements complete the design. 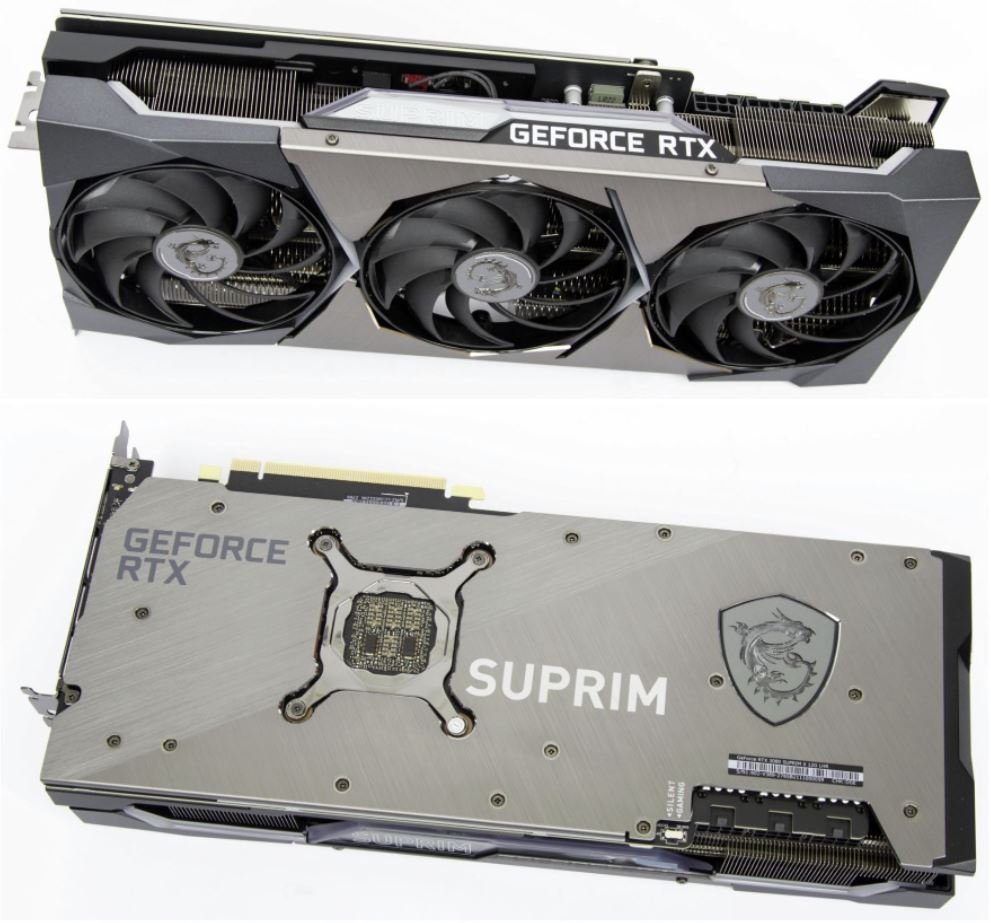 The reverse side is covered with a metal plate. On the side, there is an illuminated logo with an emblem in the form of a dragon.

In the corner are three eight-pin power connectors. Next to them is a small BIOS switch to select the Gaming or Silent firmware, which differs in the operating mode of the fans. The Silent profile provides lower rpm for less noise.

This full RGB lighting can be fine-tuned through the MSI Dragon Center app. It is possible to synchronize the backlight with other MSI components. 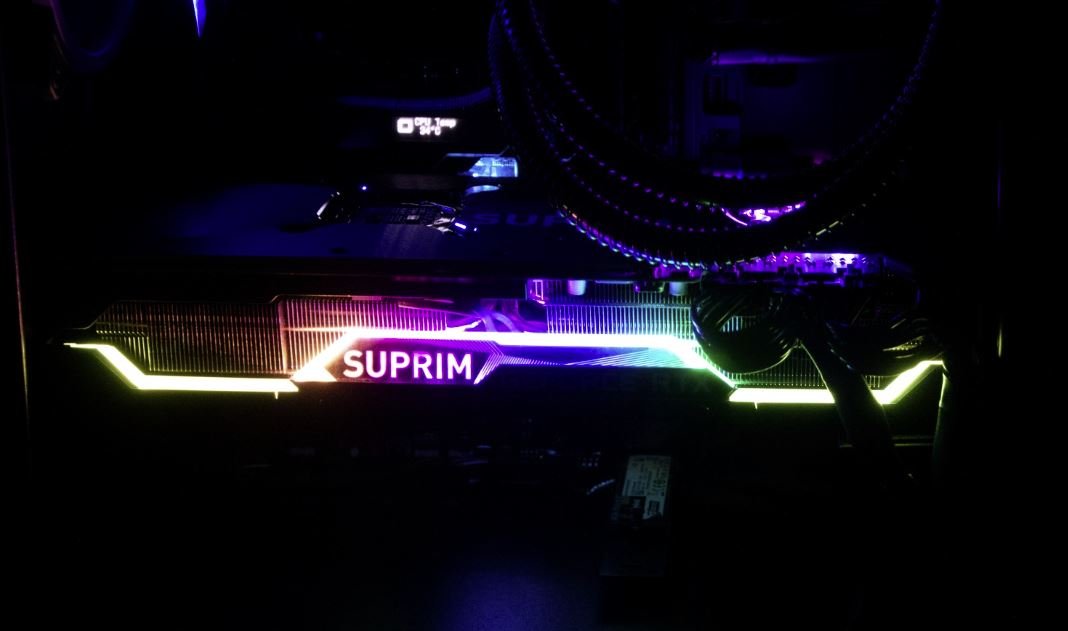 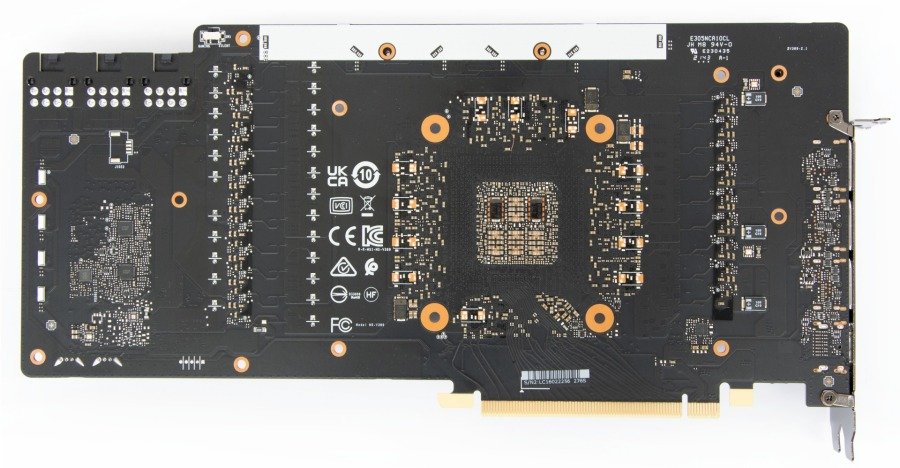 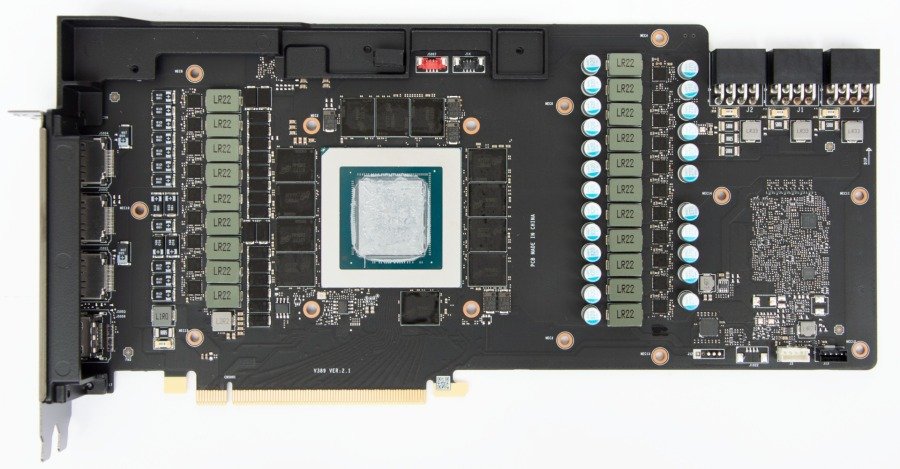 The base frequency of the GPU at the standard level is 1260 MHz, with an average Boost Clock of 1890 MHz instead of 1710 MHz. The memory does without overclocking; the data exchange frequency is equivalent to a value of 19000 MHz. The power limit has been increased from 350W to 390W. 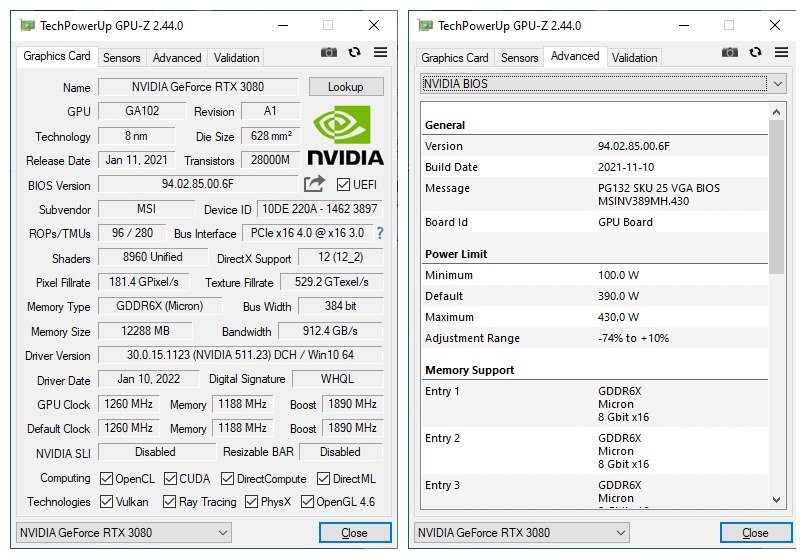 In games, the GPU temperature did not exceed 71 ° C with fan speeds up to 1900 rpm. The temperature of the hottest point of the Hot Spot crystal reached 78 ° C; the memory warmed up to 82 ° C. These figures were obtained in an open case. In the summer heat, the heating will increase in a closed case, but we generally have good performance for a top-end 390W graphics accelerator. 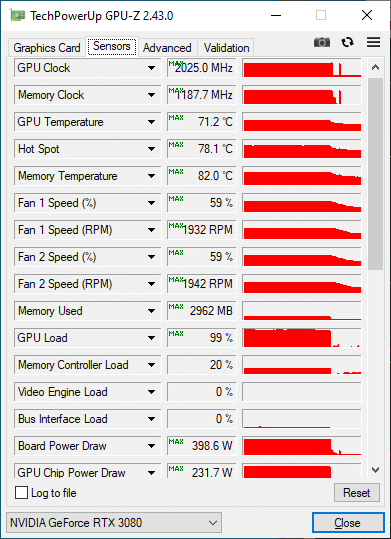 The graphics for GeForce show the full range of frequencies – from base to peak levels. For Radeon, the range is from Game Clock to the maximum Boost value.

The test bench configuration is as follows:

Testing was carried out according to the described methodology with a slight change in operating modes in Deathloop and Cyberpunk 2077. 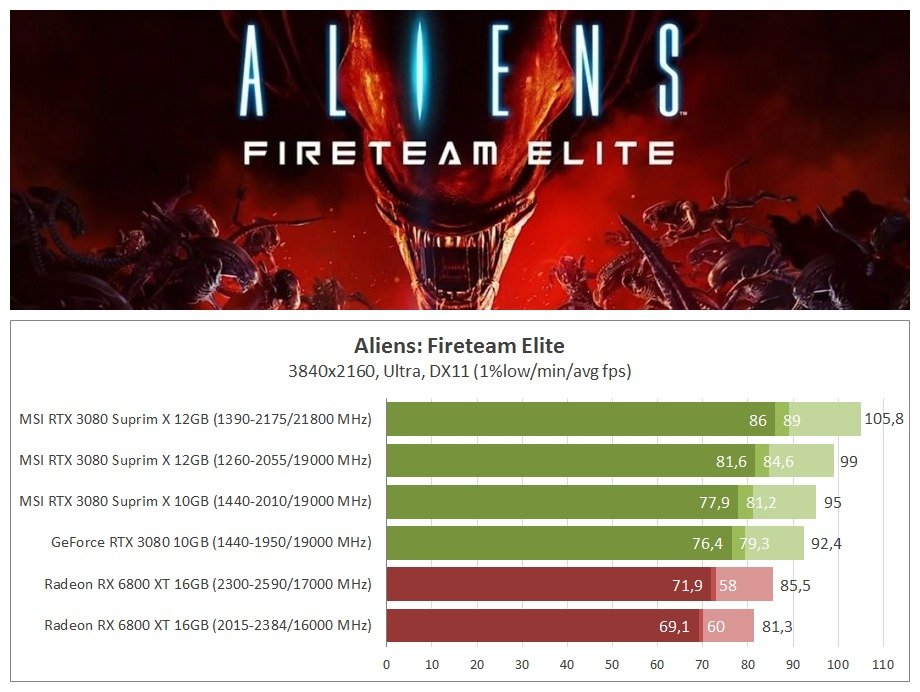 Aliens: Fireteam Elite is dominated by Nvidia graphics cards. The difference between the two variants of MSI Suprim with factory frequencies is at the level of 4%. Overclock speeds up the vision hero by 5–7%. 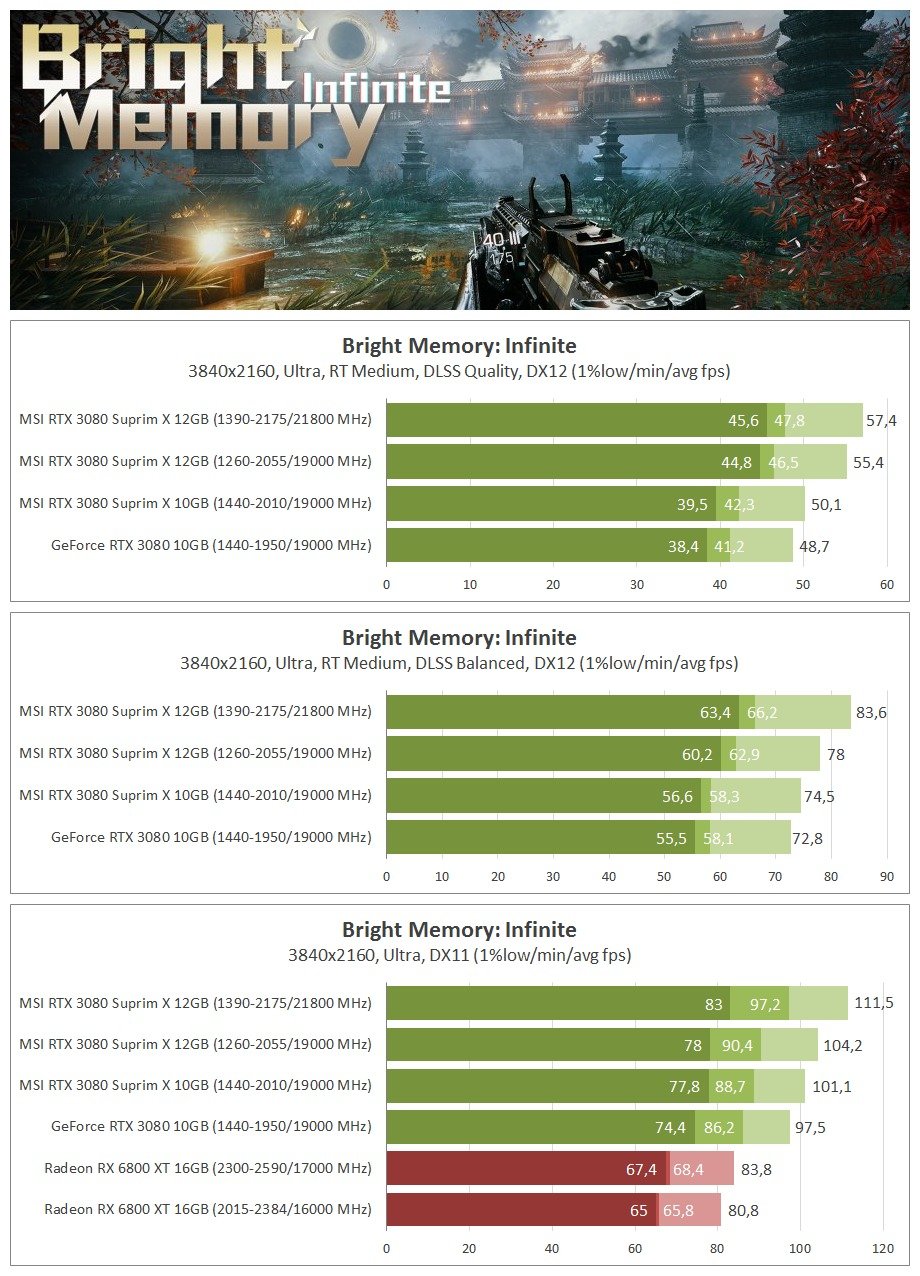 Enabling tracing results in a significant performance hit, which can be offset by DLSS scaling technology. The combination of medium-quality beams and balanced DLSS mode allows you to play at a comfortable frame rate. Still, in quality DLSS mode, even the older participant produces less than 60 frames. In the latter mode, the game loads over 10 gigabytes of VRAM, and we see the largest difference between the GeForce RTX 3080 12GB and the GeForce RTX 3080 10GB at 10%. 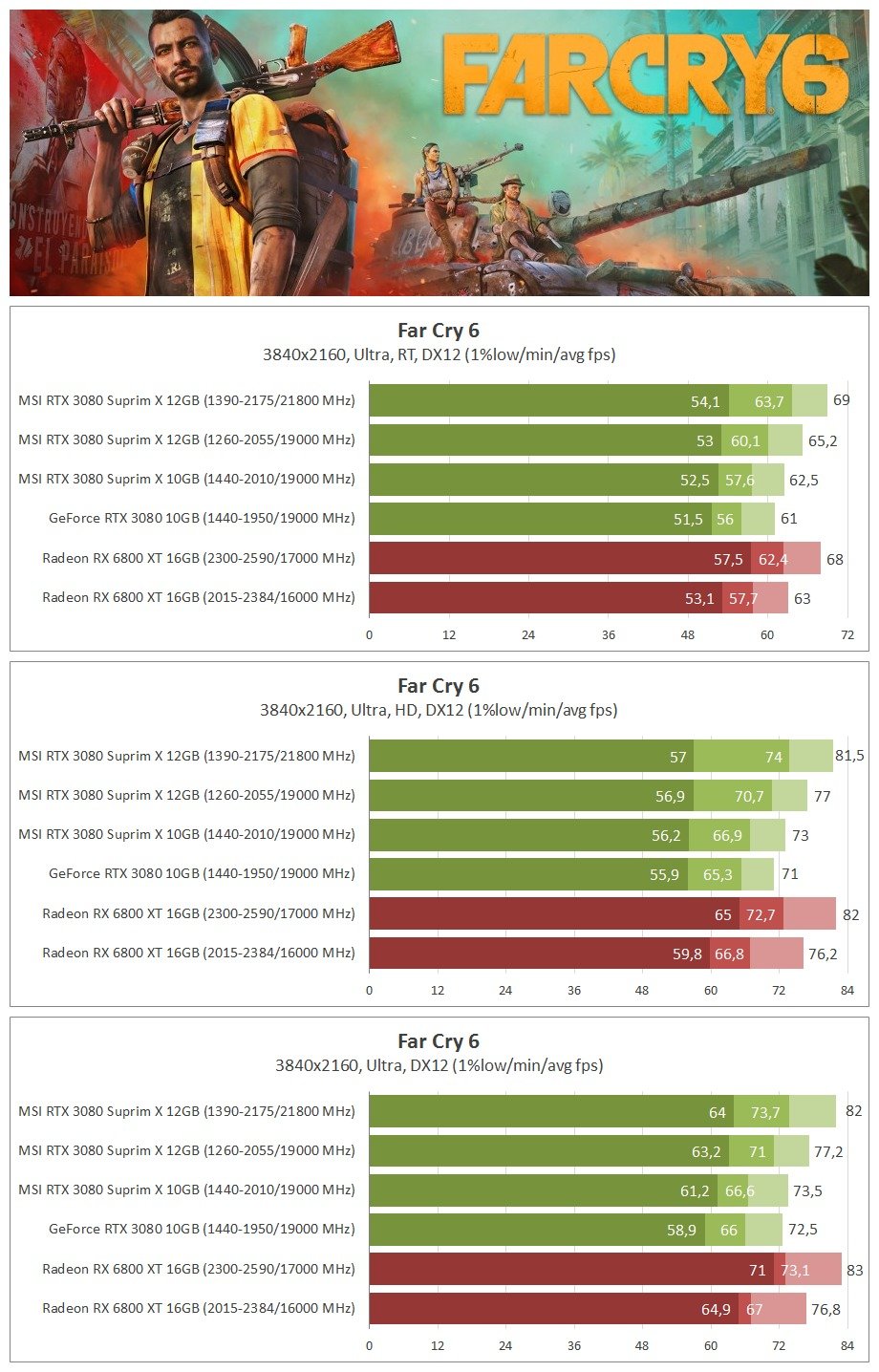 The gap between the Radeon RX 6800 XT and the younger version of the GeForce RTX 3080 is slightly reduced. The difference between the 10 and 12 GB MSI models at the same factory frequencies is no more than 4%. Loading video memory 10 GB. 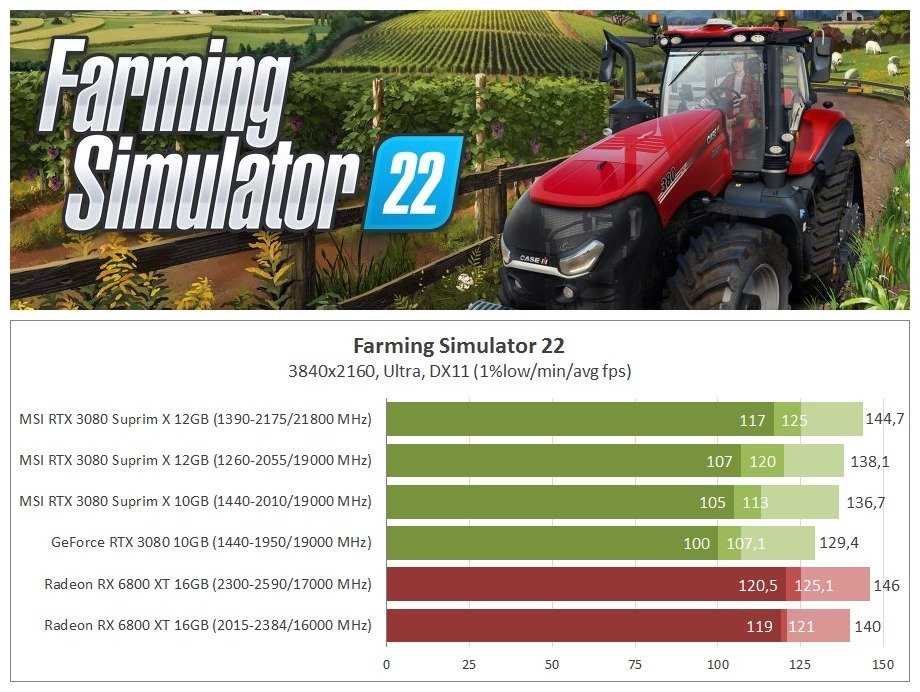 The game is not demanding, it easily runs in 4K on weaker video adapters. At face value, the Radeon RX 6800 XT leads, but the MSI GeForce RTX 3080 12GB makes up for the slight lag with overclocking. 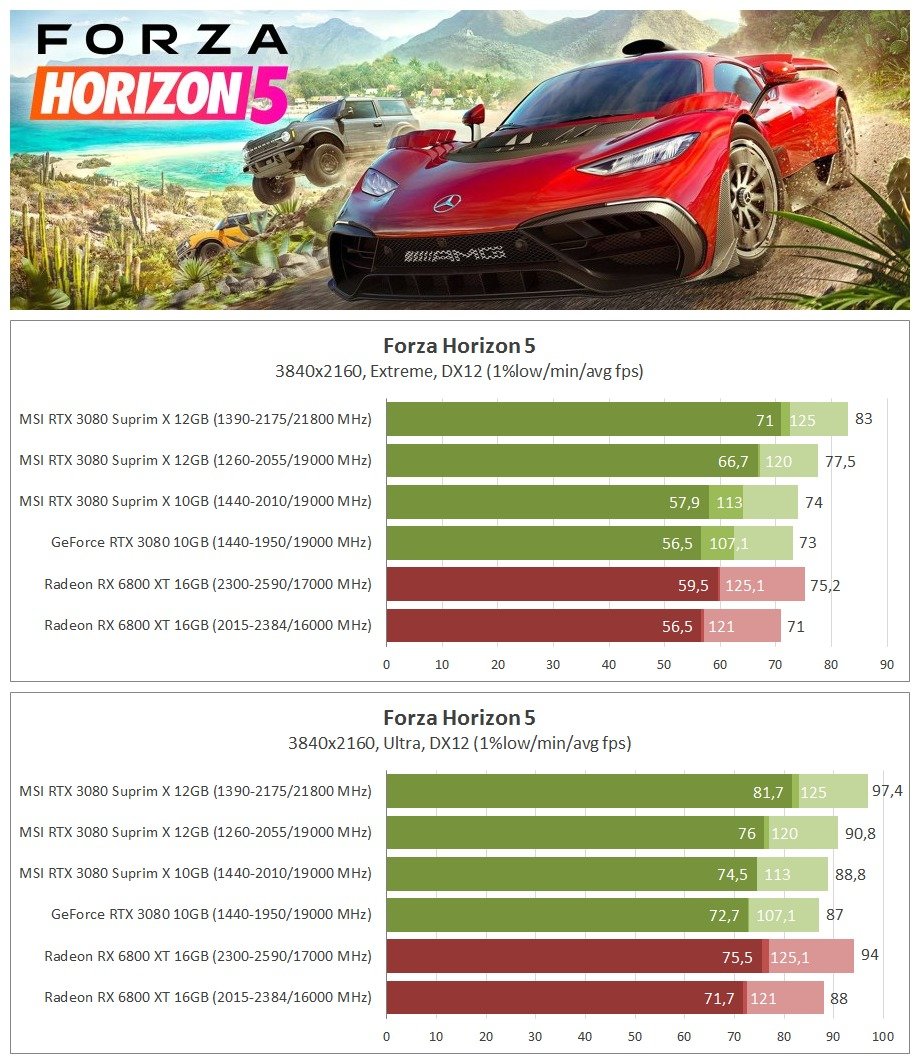 At Ultra settings (they are also “Very High”), the younger version of the GeForce RTX 3080 is slightly inferior to the AMD competitor, at maximum quality it is faster. The difference between the two MSI variants with different memory is at the level of 3-5%. 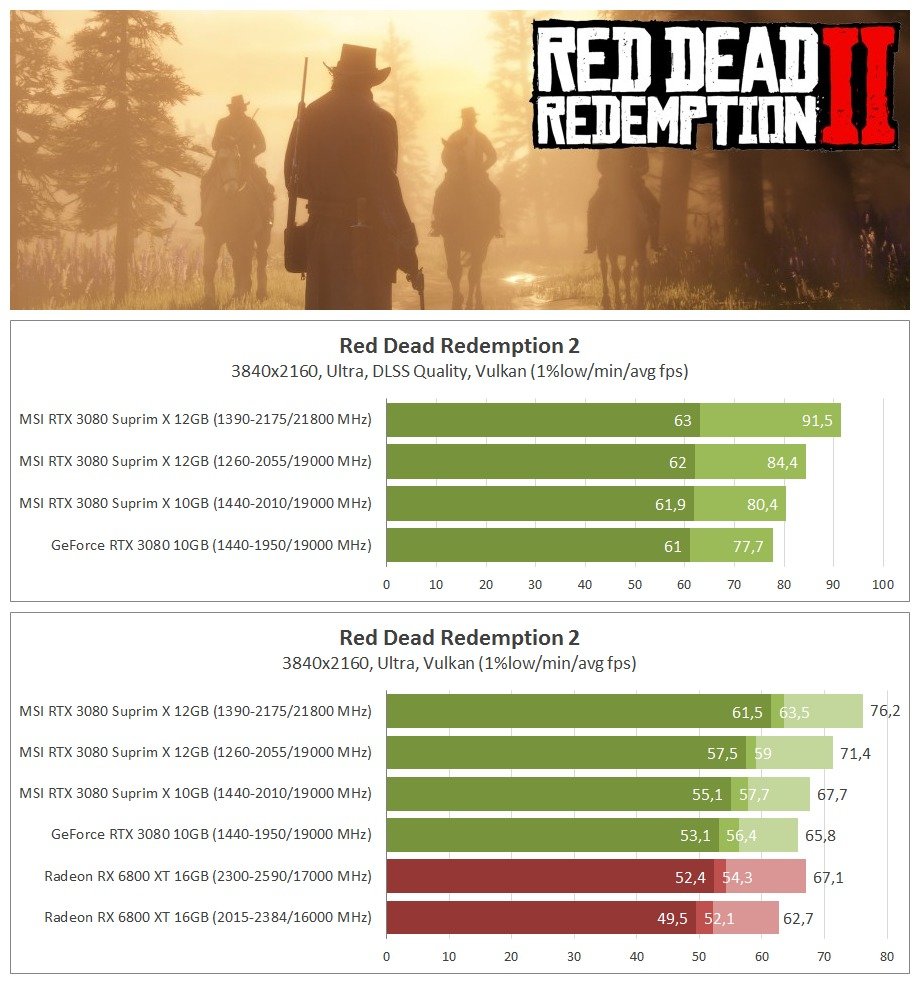 On Nvidia graphics cards, you can additionally use DLSS technology. Quality mode provides up to 20% faster average frame rate.

The two MSI variants at factory frequencies show a difference in the result of almost 6%. The old version of the GeForce RTX 3080 loses to the Radeon RX 6800 XT.

In the Port Royal benchmark with tracing, Nvidia solutions have a serious advantage. The difference between two MSI Suprim is less than 4%.

The indicators correspond to the declared data on the power of video cards. The MSI GeForce RTX 3080 Suprim X 12G has the highest power consumption. The most economical solution in this segment is the Radeon RX 6800 XT.

With identical operating frequencies, the new version of the GeForce RTX 3080 12GB shows an advantage over the GeForce RTX 3080 10GB at the level of 3-5%, in some games up to 8-10%. A different GPU configuration provides this acceleration with an increased number of computing units and a 384-bit memory bus instead of 320 bits in the old version. The extra two gigabytes will come in handy in heavy modes with tracing or with HD textures enabled. The video card belongs to the LHR line, i.e., has a built-in Ethereum mining limiter. This will minimize the demand from miners and increase the availability of the new model in the market. The cost will certainly be high, but it is unlikely to exceed the prices of the old version without restrictions on Ethereum mining.

The considered video card MSI GeForce RTX 3080 Suprim X 12G LHR is structurally identical to the previous model MSI GeForce RTX 3080 Suprim X 10G. This is a premium product with a quality board, powerful cooling, lighting, and good potential for additional overclocking. The cooler copes with its tasks at rather low temperatures for such a “monster.” With a fan speed of 1900 rpm, the video card is not quiet, but this is true for any top-end model, and you will not find better options in terms of air cooling. A demanding user can always choose a second BIOS with a “silent” firmware. This is a powerful graphics card for those who want the best performance from the GeForce RTX 3080 with quality cooling. And with additional overclocking, it will be minimally different from the GeForce RTX 3080 Ti.