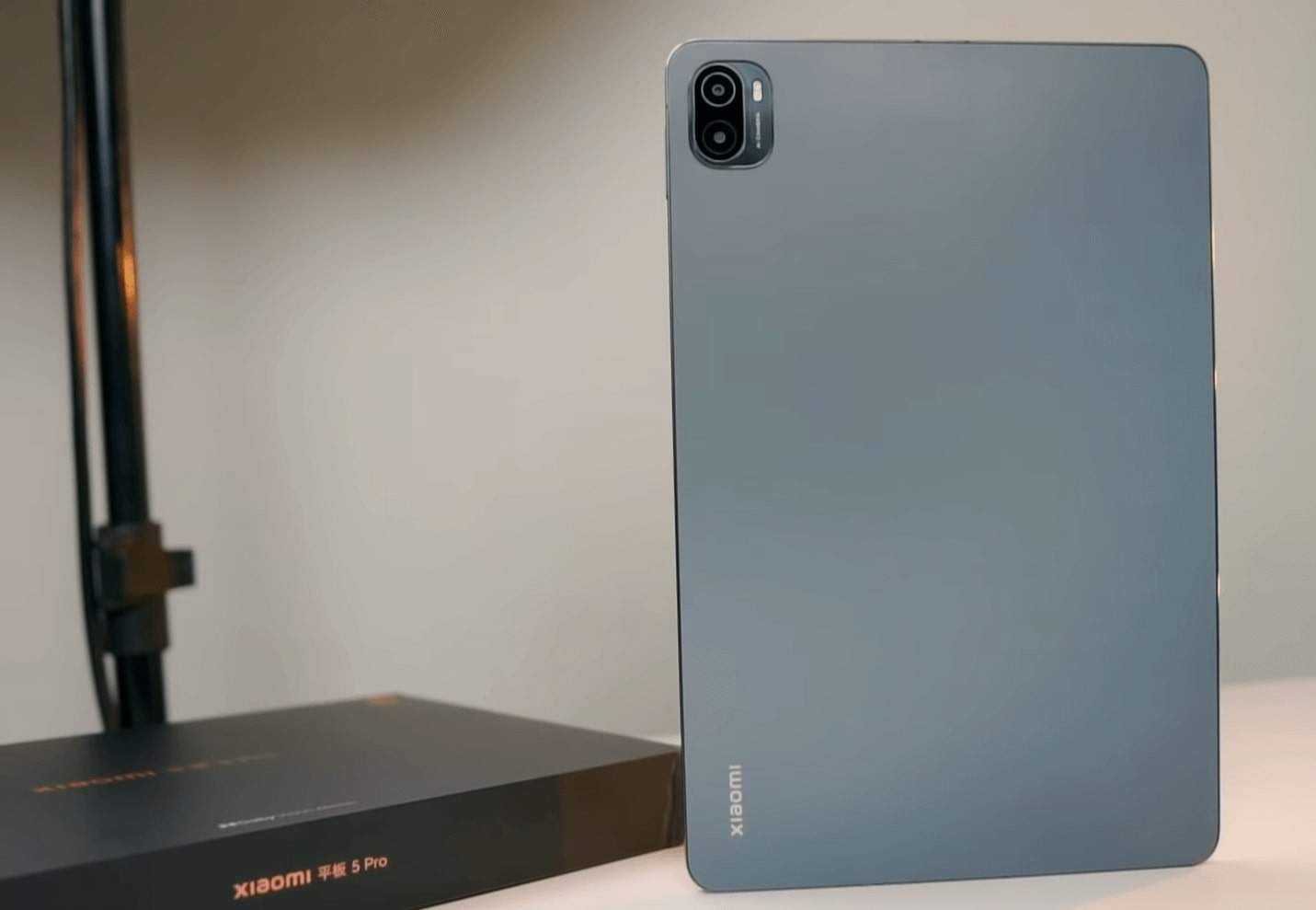 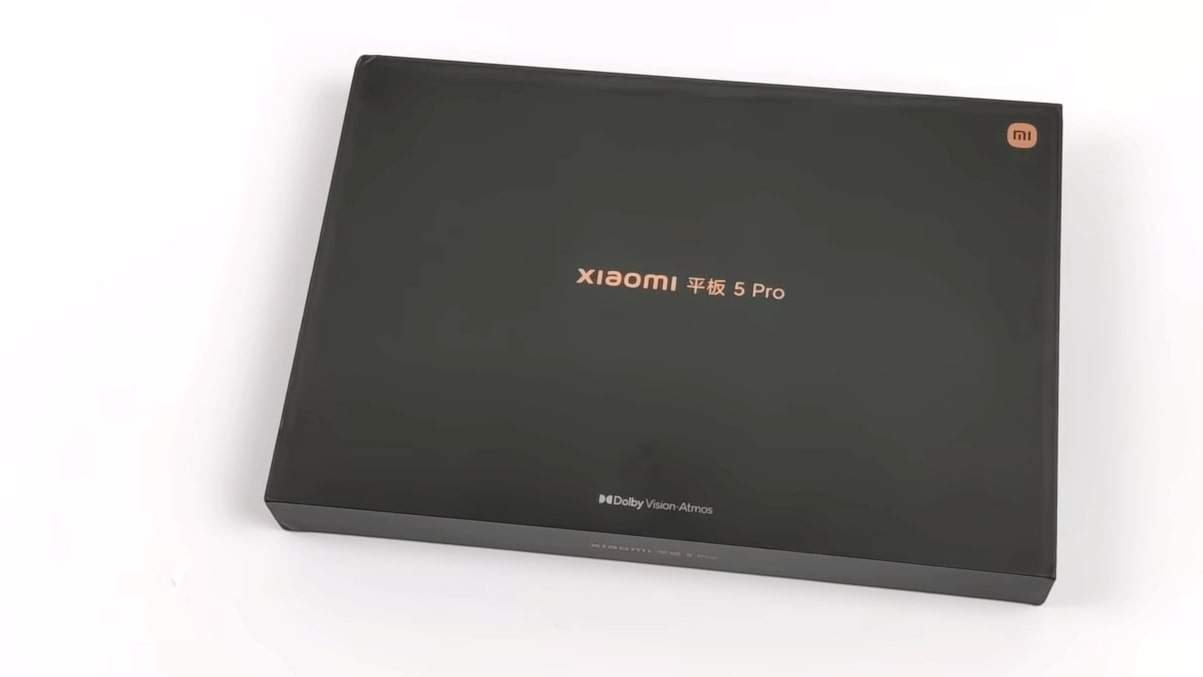 Compared to the Mi Pad 5, the device has a faster processor, a higher charging speed, a fingerprint sensor, and GPS reception. In contrast to the Xiaomi Mi Pad Pro 5G, there is no SIM slot and no 50-megapixel camera. The overall package sounds like the golden mean for everyone looking for a powerful tablet and can do without a camera and mobile data.

All new Xiaomi tablets share the large 11-inch display with 120Hz. The design and dimensions are also almost identical. The fact that you have to do without a SIM slot with 5G in the normal Pro version sounds like a big disadvantage at first.

Here you can see the specs of the Xiaomi Mi Pad 5 tablets in comparison:

The display is an 11-inch. At the edge, there is an 8.5mm wide frame on which the ball of the hand can be placed during use. The display has a resolution of 2560 x 1600 pixels (2.5K). This is sufficient for a pixel density of 274 pixels per inch. Individual pixels can no longer be made out with the naked eye, and the image appears perfectly sharp.

The panel works with conventional IPS technology. Xiaomi does without AMOLED in the Mi Pad 5 Pro was certainly a question of price. After all, even at Samsung, there is only an AMOLED panel in the Tab S7 +, while the normal Tab S7 and even the Apple iPad Pro 12.9 (2021) work with normal LCDs. 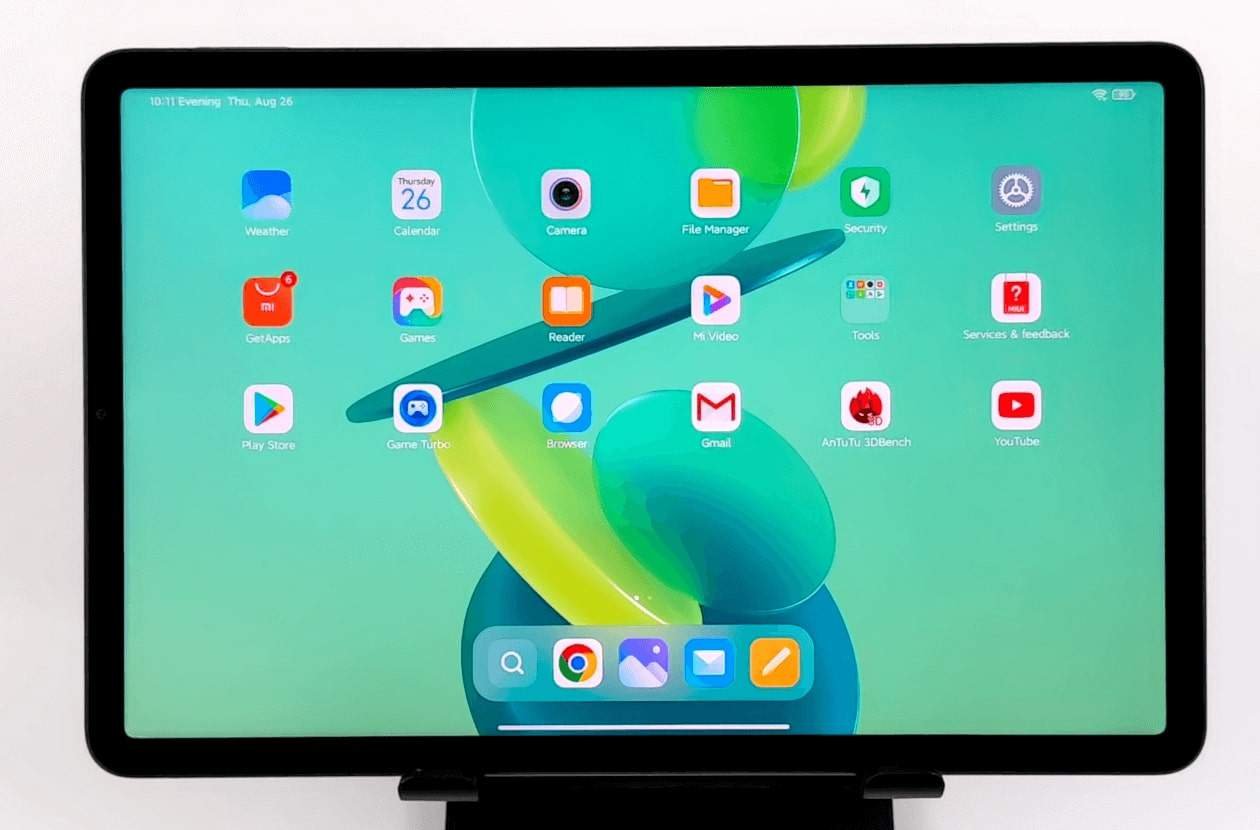 The display of the Mi Pad 5 Pro brings support for HDR content of all kinds. In addition, the Chinese version of the tablet also has Widevine L1 support and should therefore be able to play DRM-protected content from pay-to-watch providers in full resolution. With Disney +, playback works accordingly in HD resolution, but Netflix and Amazon Prime Video are limited to SD resolution. 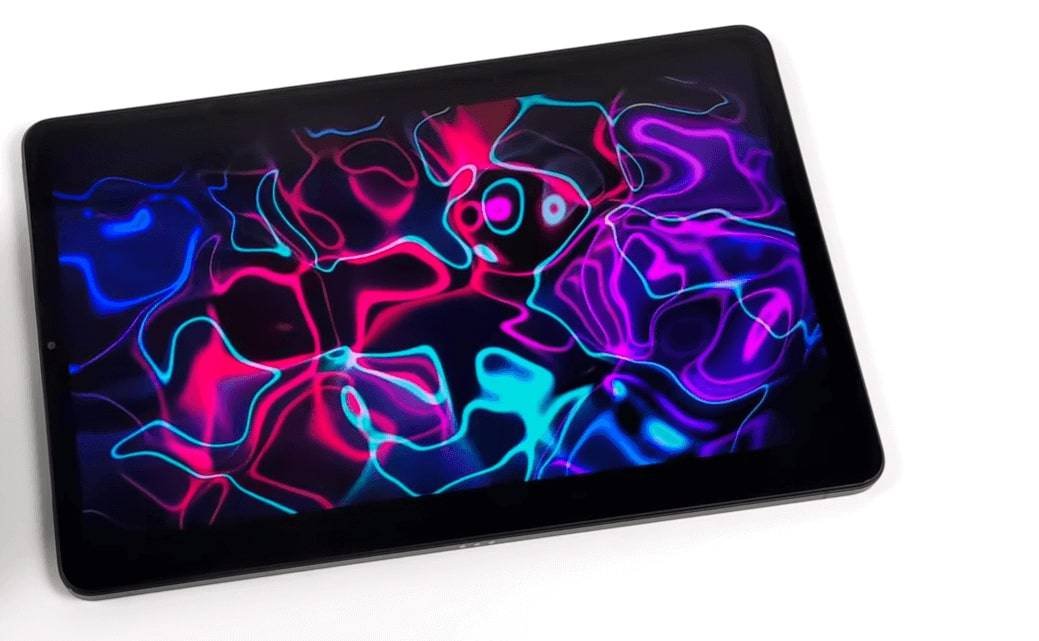 Unfortunately, this is not surprising at Amazon, but Netflix should be usable in full quality. We cannot say whether this is a software bug that may still fix. We will keep you up to date on this. Playback of free streaming providers such as YouTube naturally works without restrictions.

With an 11 inch display and dimensions of 254.7 x 166.3 x 7 mm, the Xiaomi Mi Pad 5 Pro is definitely a large tablet. The weight of 520 grams is also not small. The tablet’s frame is made of metal, and the tablet’s back is made of matt plastic. The surface feels pleasantly handy and warm in hand. However, fingerprints are deposited on it, and sharp objects are relatively easy to scratch. If you want to stow the tablet with other items in your backpack, you should put it on a protective cover.

As is currently the trend, the Xiaomi Mi Pad 5 Pro has an angular design thanks to Apple. The tablet is only slightly rounded at the corners. The metal frame has a shiny finish at the top and bottom and creates a high-quality impression. The tablet feels solid in hand and is sufficiently rigid. The volume buttons and the power button are in the upper left corner (held vertically). 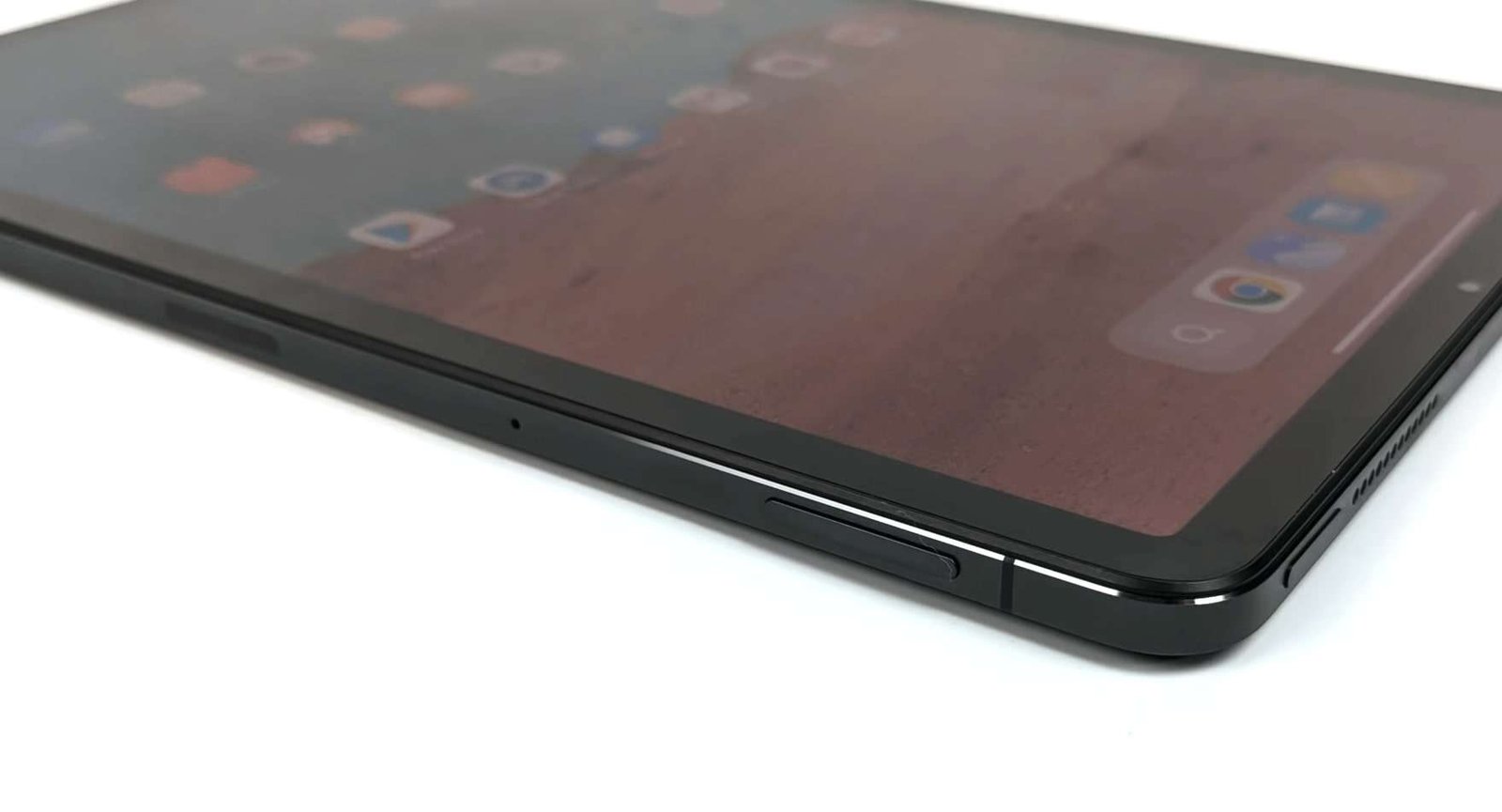 The power button houses a fingerprint sensor that works quickly and accurately. By the way, buyers of the normal Mi Pad 5 have to do without the fingerprint scanner. Unlocking takes place either when you put your finger on it or when you physically press the button. For optimal use, one should scan the left index finger and the right thumb in the settings (as a right-hander). These fingers touch the sensor, depending on whether the tablet is held vertically or horizontally. In addition, Face-Unlock is, of course, also available for unlocking. 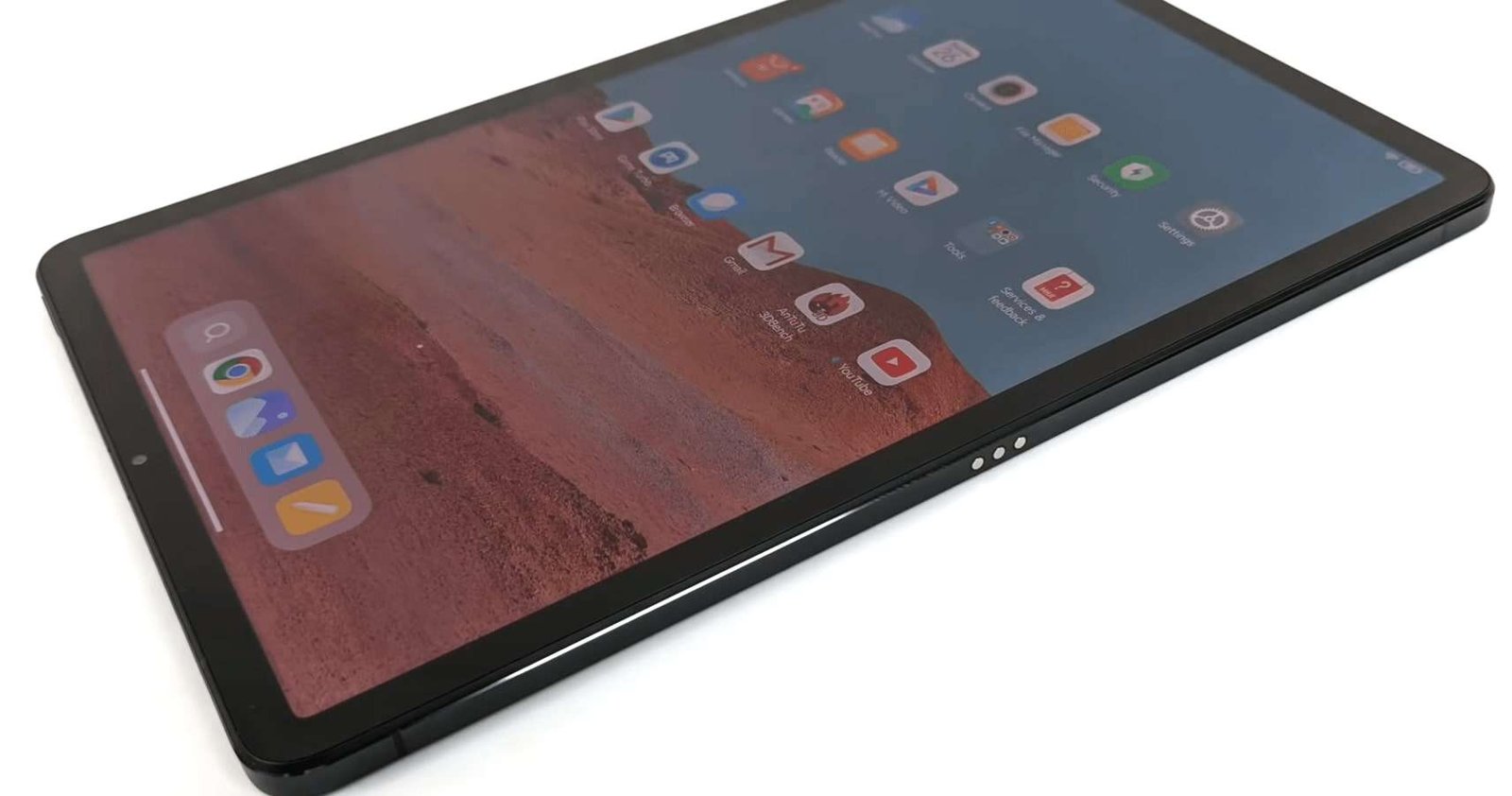 The Xiaomi Mi Pad 5 Pro has magnetic contacts for using the keyboard and a USB-C port. The USB port works with the USB 2.0 standard and can therefore not transmit the image to monitors. For use as a workstation, this can be a disadvantage for some users. Otherwise, nothing stands in the way of using the mouse, keyboard, and external data storage devices. The Mi Pad 5 Pro does not have a notification LED. There is also no headphone connection. In addition, the memory cannot expand with a micro SD. This is definitely a pretty lousy move by Xiaomi to make money with the larger memory versions.

The tablet’s design can also be consistently described as successful. You should only note that the plastic back is not too resistant to scratches. It is also a bit unfortunate that Xiaomi saves on the scope of delivery. Only a USB-C to 3.5mm headphone adapter is included with the tablet. Not even a USB-C cable made it into the box.

A Snapdragon 870 in the Xiaomi Mi Pad 5 provides the necessary performance. The processor from Qualcomm and is ultimately a higher clocked version of the high-end Snapdragon 865+ processor from last year. The chip comes, among other things, in the Poco F3or in the Realme GT Master Explorer Edition.

The SD870 is manufactured using the current 7-nanometer process, which should ensure good energy efficiency. The central processing unit integrates a total of 8 cores, which are divided into three clusters. The prime-core Cortex-A77 core forms the top here and reaches up to 3.2 GHz. The performance cluster contains three additional fast ARM Cortex-A77 cores with up to 2.42 GHz, and the power-saving cluster contains four ARM Cortex-A55 cores with up to 1.8 GHz. An Adreno 650 GPU is used as the graphics unit.

According to the benchmarks, the performance of the Xiaomi Mi Pad 5 Pro is around 25% higher than that of the Snapdragon 860 in the normal Mi Pad 5.Whether you notice something of this in everyday life depends heavily on the application. If you use your tablet for social media, browsing, YouTube and pen input in particular, you won’t notice any difference in performance. It looks different when the tablet is used for gaming, video editing or for office use with a lot of multitasking.

The Xiaomi Mi Pad 5 Pro may then be the better choice, because the performance is always excellent even under high loads. PUBG can be played at a constant 60FPS with HDR / Extreme, for example, without frame drops. Call of Duty Mobile also runs very smoothly with Very High / Extreme. Only in the extremely demanding game Genshin Impact does the Xiaomi Mi Pad 5 Pro fail to maintain a constant 60FPS at a high level of detail. The tablet gets a bit warm, but never hot.

The internal memory measures 128GB or 256GB depending on the version and cannot be expanded. The chips are fast UFS 3.1 memory, which achieves excellent values ​​with 1700MB / s in reading and 770MB / s in writing. The same can be said about the LPDDR5X RAM, which manages a transfer rate of 19.4GB / s in the test. The RAM is always 6GB in the versions without a SIM slot. The Pro 5G version has 8GB of RAM.

The Xiaomi Mi Pad 5 Pro is a tablet that has enough power for all requirements. The tablet masters complex office work just as confidently as the gaming of demanding 3D titles. However, whether you need the plus in performance of the Xiaomi Mi Pad 5 in the standard version is a question of the intended use.

The Xiaomi Mi Pad 5 Pro has a 13-megapixel camera on the back, supported by a 5-megapixel depth sensor. The front camera has 8 megapixels.

The Xiaomi Mi Pad 5 Pro in the 5G version is intended for people who regularly want to take their tablet with them on the go. For this purpose, the most expensive version has also been given a better 50-megapixel camera. We suspect it is the same sensor as in the new Redmi 10, but we cannot say for sure.

A really great feature is that Xiaomi allows input via a stylus/pen on the new tablets. Unfortunately, at the time of the test, neither the stylus nor the keyboard was available for purchase, which is why we can only summarize the information about the input devices here for the time being. We will add a practical test together with the global version of the Mi Pad 5 in the next few weeks.

The pen supports 4096 pressure levels and has a sampling rate of 120Hz. The pen’s battery should allow up to 8 hours of use and last for 20 minutes after just one minute of charging. The pen is charged by docking it to the tablet’s housing with a magnet. The pen also has buttons for erasing and changing colors.

In addition, Xiaomi has also presented a keyboard case in which it can magnetically insert the tablet. The keyboard has an English QWERTY layout. Here you can help yourself with keyboard stickers.

The battery of the Xiaomi Mi Pad 5 Pro measures 8600mAh and is therefore well dimensioned. The tablet only consumes 7 percent of the battery in our test when watching a one-hour YouTube video. In the gaming test with Asphalt 8, consumption is 11 percent per hour (measured at 200 lux in each case) and around 15 to 20% in more demanding games such as PUBG or Fortnite.

If you don’t pay the surcharge for the 5G version of the Xiaomi Mi Pad 5 Pro, you have to get by without a SIM card in everyday life. Since the 5G version does not support all of the network frequencies required for Germany anyway, this is not such a big sacrifice. In practice, you can and must use the smartphone’s hotspot function to provide the tablet with internet while on the move. In terms of wireless connection standards, the latest standards are also available with WiFi 6 and Bluetooth 5.2.

The sensors are quite extensive for a tablet with brightness, acceleration, gyroscope, and e-compass. The location can also be determined via GPS, Glonass, Galileo, and Beidou satellites. The tablet does not have NFC, and unfortunately, there is also no infrared remote control or FM radio.

Xiaomi does not have a 3.5mm headphone connector on the Mi Pad 5 tablet should also bother some users. To compensate, there are eight Speakers hidden behind four speaker outputs. The sound is surprisingly spacious and even produces a slight bass. The Xiaomi Mi Pad 5 Pro is ideally suited for watching videos. To what extent the eight speakers have an advantage over the four speakers of the normal Mi Pad 5, we still have to find out.

The Xiaomi Mi Pad 5 Pro is an excellent tablet for everyone who values ​​strong performance, a high-quality design, and a large display. The tablet has a phenomenal battery life, an excellent speaker system with 8 speakers, and can also be charged at record speed.

On the other hand, the negative points are the lack of support for Netflix and Amazon Prime Video, as well as the lack of a headphone connection, MicroSD slot, and notification LED. Also, the fact that the system is only available in English is likely to bother some users.

So is the Xiaomi Mi Pad 5 Pro the “flagship killer” among tablets? Unfortunately, due to the price, we currently have to answer this question in the negative.

Finally, you should also keep an eye on the normal Xiaomi Mi Pad 5. The more powerful processor of the Pro version is only relevant for gaming and video editing. In addition, the normal Mi Pad 5 will appear on the global market and will probably offer a decent price saving compared to the Pro version.