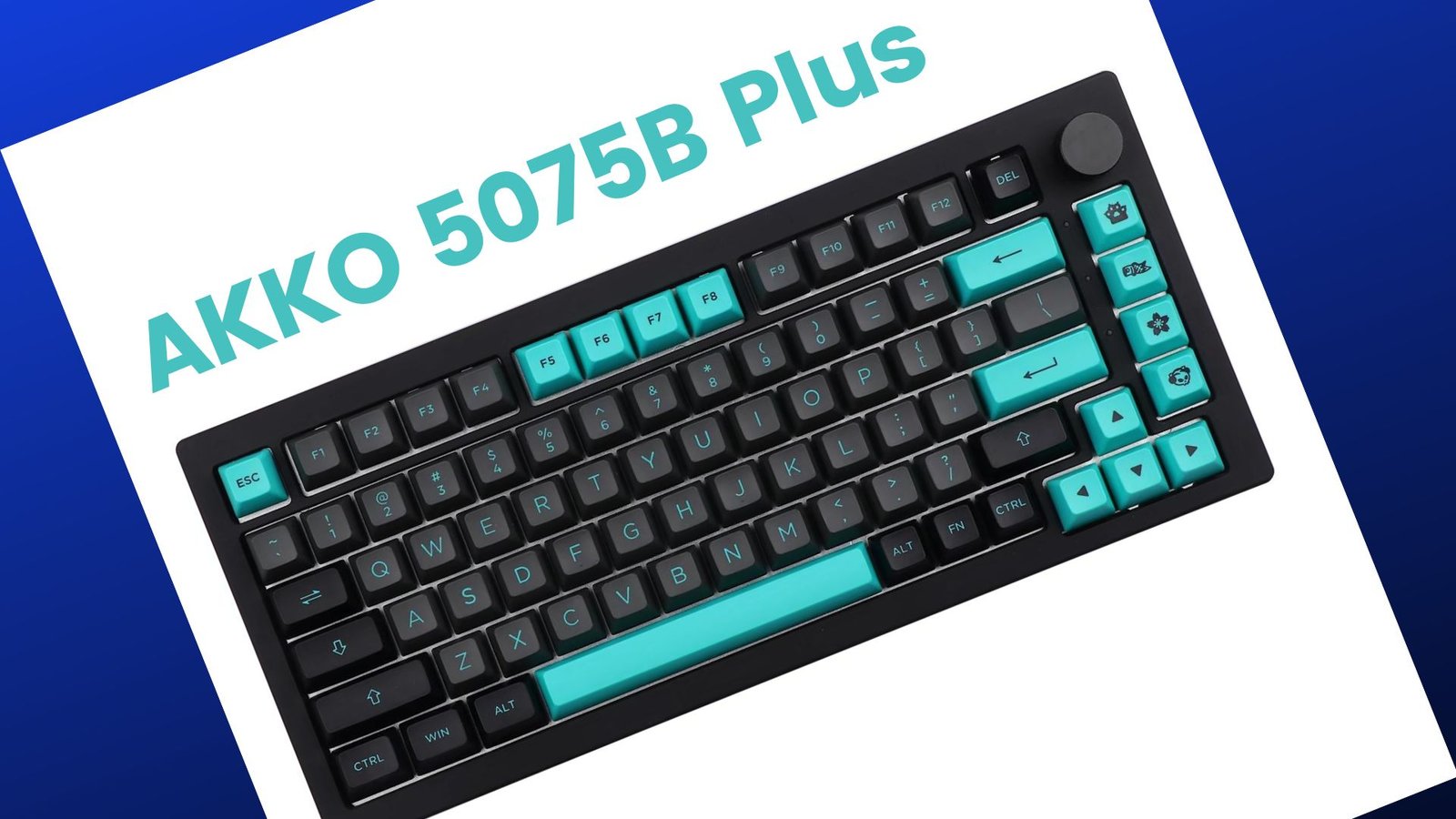 Let’s see how this customizable mechanical keyboard with a “Gasket mount” works in real life and how to choose between the many versions that are all very similar. its good points? It belongs to the “B Plus” family, so it has Bluetooth and Wi-Fi connectivity, a volume knob, and all the other features you’d expect from a custom mechanical keyboard.

AKKO 5075B Plus has many items. It begins with a sturdy keyboard cover and tweezers for keycaps and switches (two separate tools). It also comes with a 1.5-meter USB-C cable and turquoise keycaps (20 keys in all). There’s also a gold-colored knob (on the black keyboard, the knob is black), a polycarbonate plate to replace the metal one, and mounting gaskets. Manuals with keyboard shortcuts should not be missed. A Wi-Fi dongle is inserted into the keyboard shell. 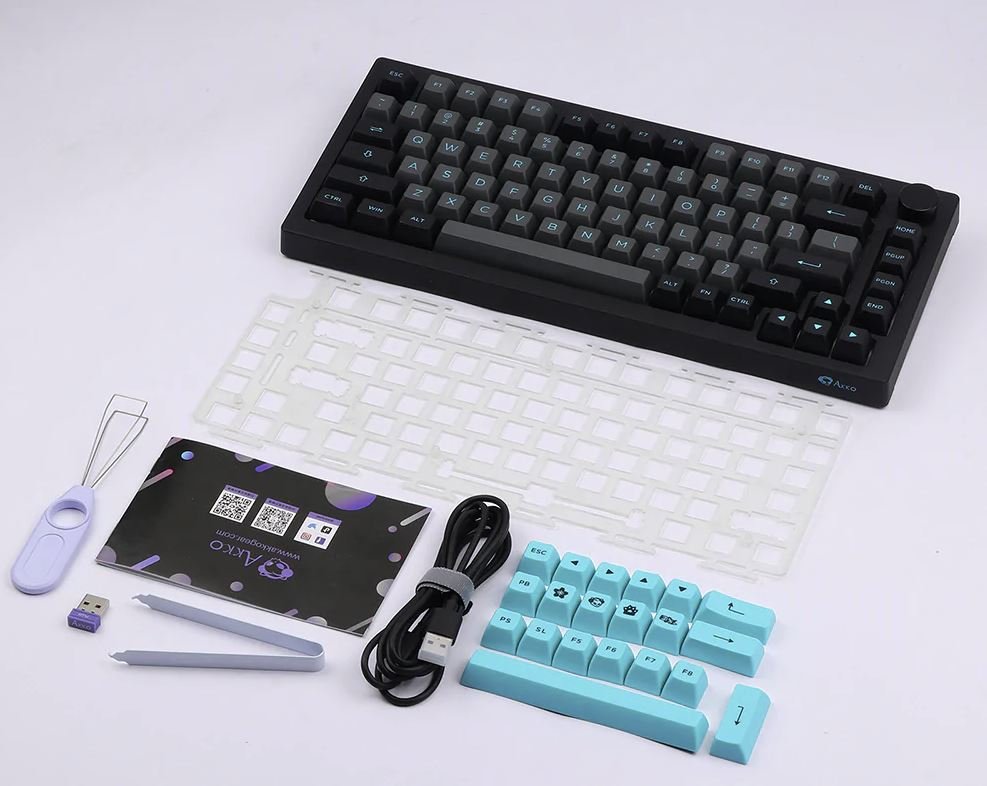 The AKKO 5075B Plus is one of the AKKO keyboards that EPOMAKER sells. This model seems to overlap with others of the same brand in many ways.

Buy this product
Buy on Amazon

The AKKO 5075B Plus is a 75% format NKRO hot-swappable mechanical keyboard consisting of 82 keys. No numeric keypad, but plenty of function keys (F1-F12), directional arrows, and Del, PgUp, PdDn, End, and Home. Different compositions favour keyboard compactness. In addition, black ( or golden yellow, depending on which one you decide to install). It’s composed of aluminium and has classic step feedback for accurate settings. It’s also programmable.

The AKKO 5075B Plus has generous dimensions, much more than the TH80, which it mimics. 335 x 146 x 42 mm is accurate. Due to the key layout and additions like the volume knob and side LEDs, several measures are raised. 911 grams isn’t bad either. To the right of the Home, PgUp, PgDn, and End keys are LEDs for CapsLock, Win Lock, and remaining charge.

The black AKKO 5075B Plus has a classic look that is shared by other models from the same company and from other companies as well. The white version with pink keys might not be as popular, but that depends on what you like. 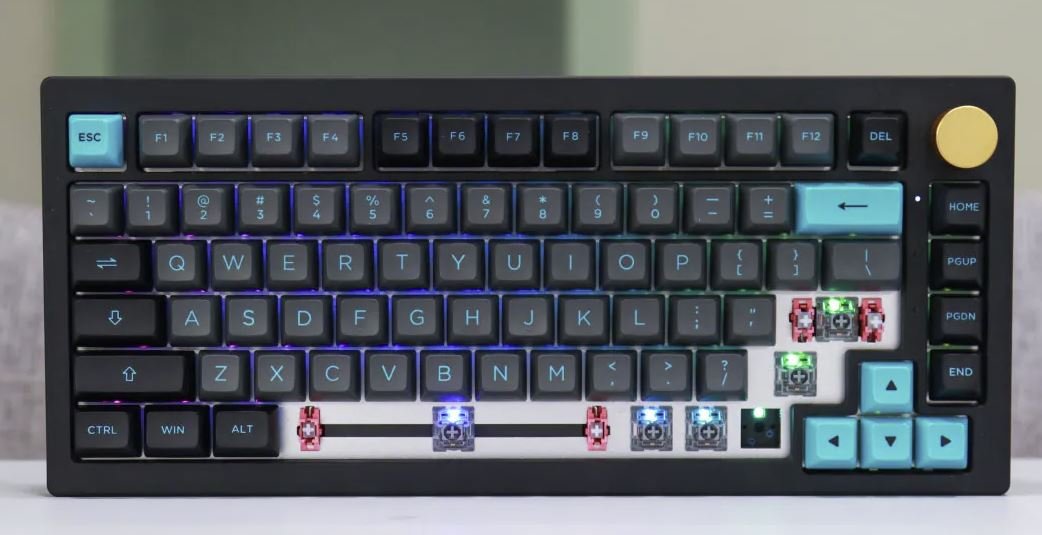 The keyboard is still backlit. It’s excellent that you can change at least some of the way it looks with replacement keycaps, which make it look a little more turquoise than the basic keys, and the golden knob that we put on right away. A bit of gold adds some style to the whole thing and makes the knob stand out since it is mostly black on black. Unlike the other models, as we’ve already said, the side LED strips can be fully controlled through software (and therefore also deactivable). The cool thing is that the LEDs on the sides are brighter than the ones under the keys. Overall, the keyboard has a pretty classic look (in the large 75% family), but there are some nice touches like the LED strips and the knob.

The model also comes in white with pink keys for individuals who want something lighter. We can mix keycap sets (obviously spending more). The body, keycaps, and knob remain the same, but the colour changes. White keyboards with oiled AKKO Cs Wine Red switches. 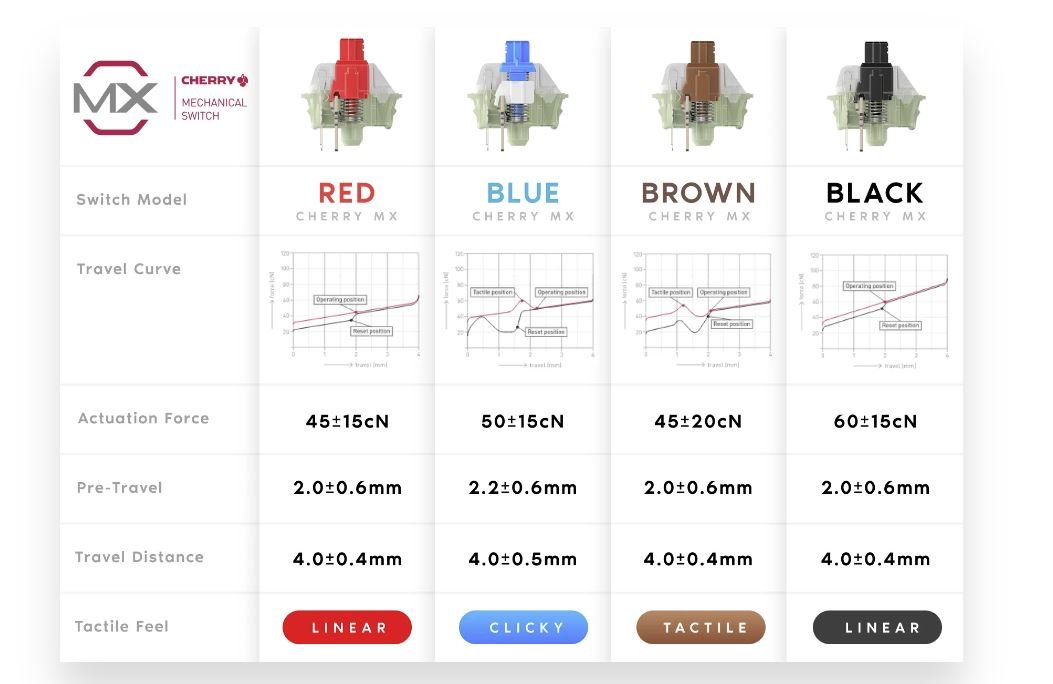 From a constructive perspective, the paragraph on technological features may be enough to understand the keyboard’s attributes. The keys are robust and well-made, and the polyurethane layer and gasket plate reduce typing noise. Replace the metal plate with the polycarbonate one in the packaging to reduce noise. The structure would become more flexible, affecting noise. We didn’t notice any creaks or other structural problems in the 5075B Plus. As described in the previous paragraph, disassembling it requires controlling a breakable joint system. A completely replaceable keyboard ensures the product’s longevity through frequent maintenance.

On the back, in addition to the 4 rubber feet that give the keyboard a certain grip (even the weight helps), there are two double risers, also with rubber feet, that allow you to use the keyboard at 3 different inclinations: 5 °, 8.3 °, and 11.6 °. The keyboard’s design and ASA key profile make it usable even when tilted.

We used the keyboard to write this review and to play Overwatch and Call of Duty: Vanguard. As noted, we like the typing experience. AKKO home switches are rapid and sensitive, requiring practice. Less experienced users may make more errors in the beginning, but it’s just experience.

The shell is made of well-made ABS plastic . To separate the PCB from the keyboard’s body and other elements, you must remove the keys and switches and hope not to break anything. For example, less experienced users may have trouble changing the plate. Two RGB LED strips on the right and left sides of the 5075B Plus project a light pattern on the desk. 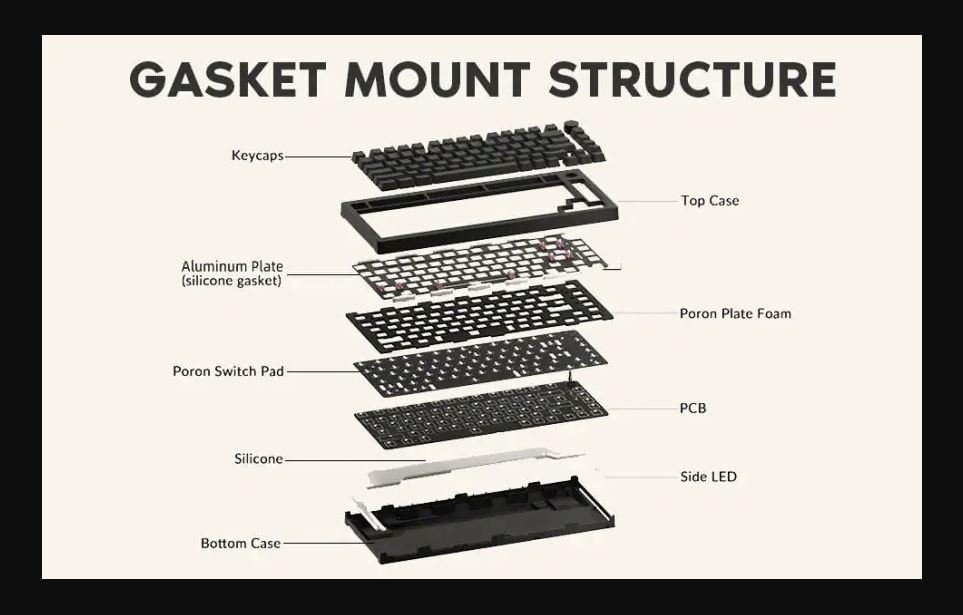 A Gasket structure is found in various non-AKKO variants. The typing noise is solid but pleasant, and you can tell that it wasn’t a mistake. Each slot features north-facing LEDs. Backlighting is useful as PCB keys aren’t see-through. The model’s dark colors exacerbate this. The lighting was blander than usual. The more of these keyboards we try, the more we think illumination is pointless. Acrylic or translucent plastic keyboards only. 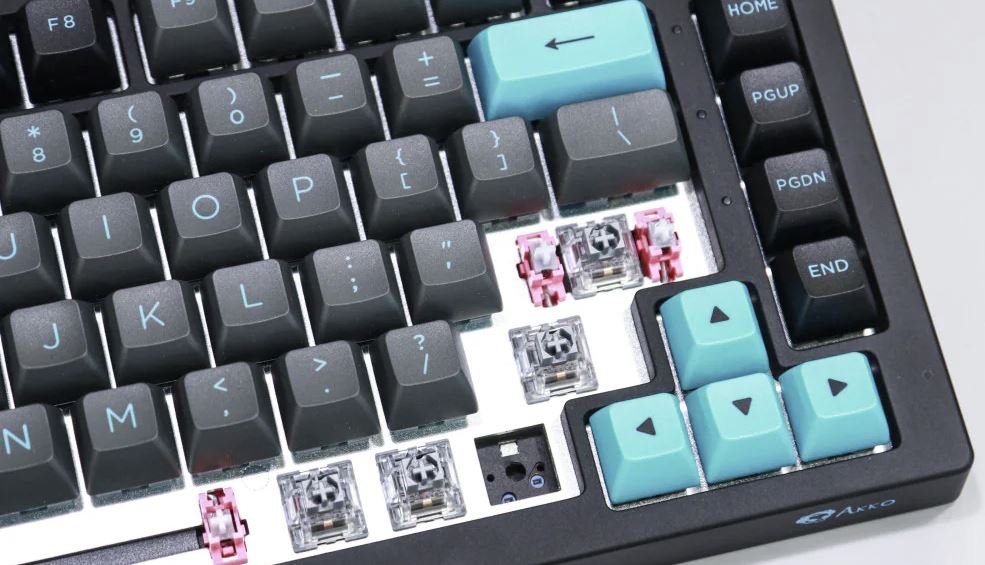 The keycaps are composed of double-shot PBT (polybutylene terephthalate), one of the most durable materials on the market.

The keyboard is pre-programmed with shortcuts to adjust the backlight mode (including the side LED strips) and parameters (brightness, speed, direction), start apps, and manage multimedia playback. The box’s documentation lists many shortcuts. Here you can also adjust the system’s volume with the volume knob. By pressing the default knob, we may alter the key backlighting level. Useless? Perhaps. It’s useful for turning off LEDs to save battery life. The revolving knob may be reconfigured to replicate the mouse wheel or zoom. Shortcuts manage switching between connected devices. FN+E, R, and T switch to Bluetooth devices; FN+Y to the Wi-Fi dongle; and FN-U to wired mode. To transition from Windows to Mac OS, use the lower-body switch. Keyboard shortcuts vary by mode. FN+F4 launches Siri on MacOs.

The AKKO Cloud Driver lets you record macros using a classic interface with delay indications, a macro list, and other capabilities; upgrade keyboard firmware; and create unique backlight effects. In the Lights area, you may configure the side LED strips and the keyboard’s standby behaviour. Again, under the autonomy paragraph. From the main screen, you can remap all keys except FN, Win, Esc, and the volume knob. The UI is minimalistic (though upgraded from a few months ago) and exclusively in English, as with other EPOMAKER keyboards. This doesn’t imply that his work is easy.

The AKKO 5075B Plus uses the same software as the EPOMAKER-sold ACR Pro Alice Plus. It’s a redesigned version of the AKKO Cloud Driver. Only the aesthetics change, not the functions. Download keyboard software and instructions.

The 2,500 mAh lithium battery lasts a week (5 days, therefore). It relies on the light effects’ strength, movement, and wireless mode (Bluetooth or Wi-Fi). Turning down the backlight will greatly increase battery life (which makes sense as it’s not visible at base).

The 5075B Plus’ battery is weak. 2,500 mAh may not be enough due to the added LEDs. Software can alter standby parameters, as described in the functions paragraph. The LEDs switch off after 1 minute of inactivity, and the keyboard sleeps after 10 minutes. This foresight can save a few hours, but the only genuine remedy is to switch off the illumination, which is mainly decorative. You can use the volume knob to adjust the LEDs’ brightness or turn them off entirely.

The AKKO 5075B Plus is a 75% hot-swappable programmable mechanical keyboard featuring a volume knob, gasket-mount structure, gorgeous rich packaging, and high-quality mechanical switches. And as you know, you pay for quality. It’s plastic, but don’t underestimate it. Being near to $120 doesn’t make it the most tempting, although price decreases are possible.

There are several similar options, such as the EPOMAKER TH80 (also available in new colours and with Flamingo switches) or the Ajazz AK816, both sold by the same EPOMAKER.