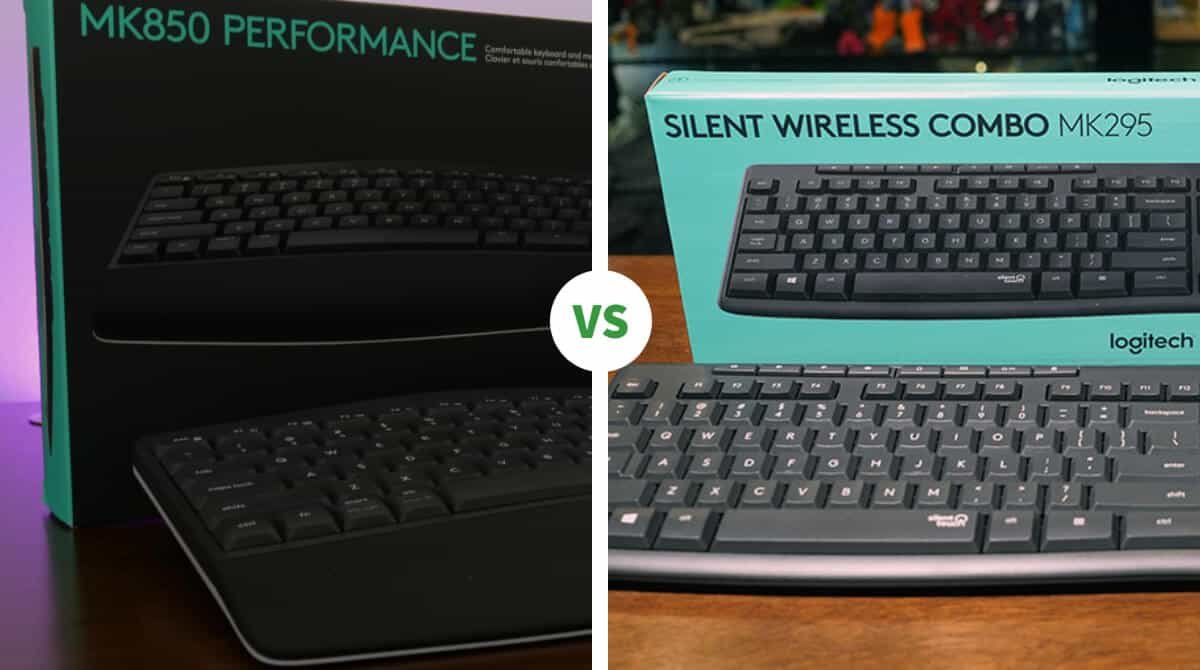 Logitech kits (importantly, not the Logitech G gaming division) are aimed mainly at office workers who want to increase their products easily. Hence the simple form, membrane mechanism, accessories designed to make life easier for us at work in front of the screen, or the lack of a backlight, which is not needed in the light of office fluorescent lamps. The MK850 Performance Kit adds an aspect to this combination, with ergonomics in mind.

Logitech MK850 Performance quickly and easily because after unpacking the mouse and keyboard from simple cardboard and protective foil, all you need to do is plug the 2.4 GHz USB receiver into the computer and switch the device switches to “on.” These will connect to the computer in no time, and the pre-installed batteries (two AAA in the keyboard and one AA in the mouse) will provide up to 36 and 24 months of operation consecutively. However, if you choose to connect to Bluetooth Smart, the process will take a little longer, requiring you to connect both devices to the target device manually.

Logitech MK295 Silent Wireless Combo is a typical office set consisting of a wireless keyboard and mouse and a USB receiver, which is to provide you with one thing above all – blissful silence. This kit is insanely simple and even reminded me of my short adventure with the IT team in the office when I (and others) had to create new and fully complete computer sets. One morning, a large box with several dozen Logitech keyboards arrived at us, announcing an exciting process of unpacking and attaching keyboards to the computer.

The Logitech MK295 reminded us of those times and in good taste because this set will be the perfect basis for new office sets. All you need to do is take the mouse and keyboard out of the box, tear off some security features, plug one USB receiver into your computer, and that’s it. Even AAA batteries have already been inserted into the equipment, and their replacement is required only after about three years (according to the manufacturer).

Looking at both the keyboard and the mouse of the MK850 set, it’s hard not to notice that ergonomic-oriented devices are at stake in both cases. Thus, the mouse has far-reaching grooves and shapes to suit the right hand, and the keyboard has a large wrist rest and a profiled casing with a bulge in the letter section.

Indeed, a handy palm rest looks as if padded with fabric, but it is actually made of hard rubber with a certain texture and no other. It’s not that thick, and there’s not a gram of foam underneath it, so don’t expect your wrists to feel like they’re on a pillow.

In terms of the quality itself, only the slightly bent plastic casing when pressed, reworked recesses for the keys, and good grip on the table together with two pairs of vertical feet. Only problem? Stickers on the keys.

A similar or even better state of affairs is represented by the mouse of the MK850 Performance set, visually connecting to the keyboard. At the same time, it offers what is most important, i.e., excellent support for the hand, pleasant to the touch rubber material with hard rubber in the lead role, sliders that cannot be complained about, reliable main buttons, and Logitech’s proprietary roller with two operating modes. In them, it provides either free-scrolling without any resistance, or on the contrary. In the latter mode, we feel each successive jump on the bearing and influence its intensity in the application.

The simplicity of the set is also reflected in the components themselves, i.e., the standard keyboard made of black plastic and the mouse in the same style, but with the addition of “glossy” plastic inserts. Do not count on top performance because the keyboard (dimensions: 441 × 149 × 18 mm) bends left and right with more pressure, squeezing sweat out of the optionally unfolding “legs.” The keyboard sticks to the top on six non-slip rubber bands without them, and it works really well.

Of the features worth mentioning, the MK295 keyboard is partially resistant to spills; it has eight dedicated multimedia buttons, an on / off switch on the upper edge, together a LED indicating capslock activation and a cover for two AAA batteries. However, the most important thing in this model is what is hidden under a series of keys carved in valleys and pleasant to the touch, and this is the latest SilentTouch technology.

We are talking about nothing else than the switches under the main mouse wings, as well as the keys themselves, which may be based on an age-old membrane mechanism, but reworked to the point of being insanely silent when activated. Importantly, this silence maintains the appropriate level of responsiveness. Even when typing quickly, it works great, but not as great as, for example, a mechanical keyboard with switches strictly for typing.

Part of this mechanism is lubricated guides under the keys, which suggests that the keyboard will, unfortunately, become louder over the years, but this is just a guess, as verification of this requires at least a dozen or so months with this set.

As mentioned, the blissful silence of the keyboard is also preserved in a small, “office” mouse, weighing 75 grams, which only has the main switches and a scroll wheel. Although the former work flawlessly, the reel is a little joke against them because its use may be pleasant to the touch and smooth, but at the same time, it generates a high, strangely “dry” noise. The same applies to its activation (pressing the roll) because it is traditional, which is insanely loud compared to the rest.

In addition, after configuring Logitech Flow, we can even more smoothly juggle files, photos, or just copied text between our devices. However, this is not a magic trick but a smart network solution, so before transferring large data packages, prepare for a few minutes of waiting. The transfer is carried out via a wired or wireless connection between computers with previously installed applications.

This configuration is done using the Logitech Options application, where we will be able to adjust the mouse’s sensitivity, specific actions of individual buttons, and gestures, among which something as critical as the basic functions of the buttons was missing. This forced me to change the screenshot capture software assigned to the Print Screen key by default. Its place was replaced by a single key for real-time hardware changes.

The MK850 Performance set consisting of a mouse, and a keyboard is a typical device oriented towards specific users who, after learning its functions, will be able to get more out of it than from standard models. Hence the price of 105 USD, which is not the lowest for equipment of this class, costs its own not because of its exceptional quality, but due to the possibilities and technological facilities.

In general, the MK850 Performance is hard to fault because it is a typical office peripheral set that colleagues can envy when they understand its inconspicuous nature. So if you are looking for a combination of functions that this set offers, go ahead and give it a chance, enjoying higher productivity and, most likely, the comfort of work.

MK295 is not without flaws, but it is great as a set designed to be quietly tapping in Word or Excel. Not in terms of quality or precision, but working time on the included batteries, wireless mode, the desired silence (although the roll is shameful here), and even the pleasure of typing when the keys with a low work path can be pressed so well. The price of 36 USD and a two-year warranty only emphasizes that it is worth it, as long as you are looking for these features, of course.

Related Topics:
Up Next