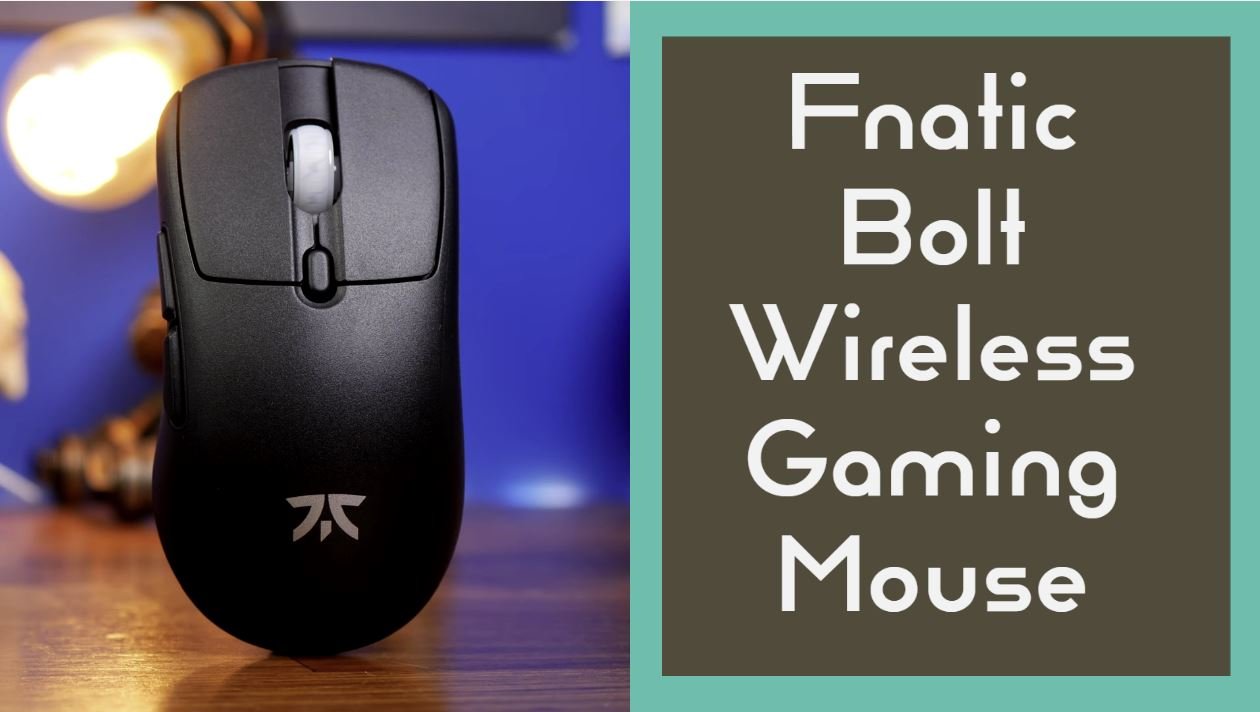 Bolt is a gaming mouse with a symmetrical design developed by Fnatic Gear. As far as the specs are concerned, it seems to be a product with pretty good conditions, such as a solid shell with a body weight of only 67g, a PixArt PMW3370 sensor, and a Kailh GM8.0 switch.

In addition, it supports both 2.4GHz wireless and Bluetooth. It has a large capacity battery that lasts up to 110 hours, which gives an impression that it is superior in connection and battery compared to competing products. We’ll look closely at what performance this gaming mouse can bring in this article.

In this article, we would like to present a review of the Fnatic Gear gaming mouse Fnatic Bolt. 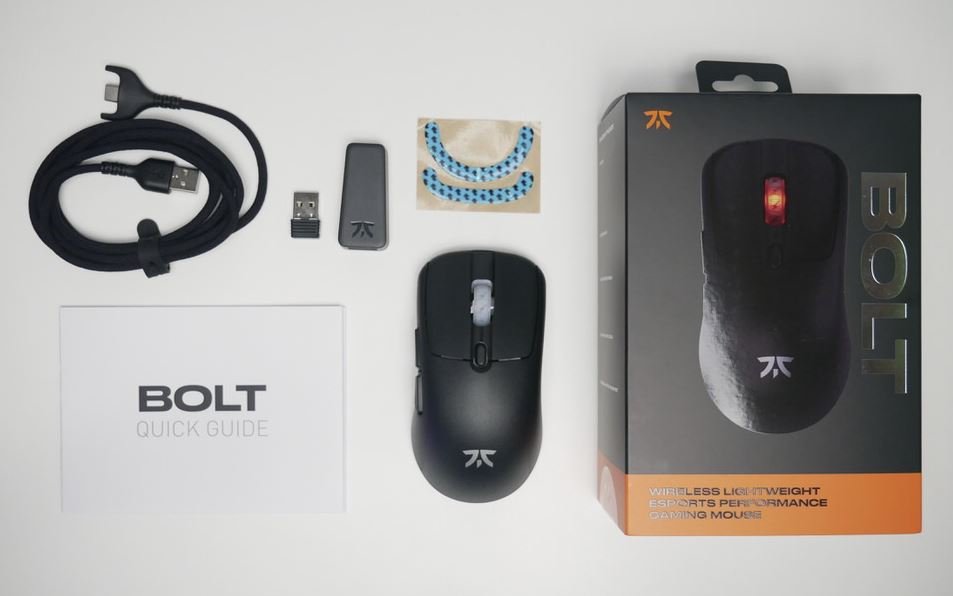 Bolt is a symmetrical gaming mouse with an original shape designed by Fnatic Gear. The dimensions are 120.89 x 55.44 x 38.53 mm and are classified into medium to small sizes.

The total length is a little short, about 120 mm, and the shape is that the weight is placed on the back of the main body, and there is a big bump that can hold the palm. 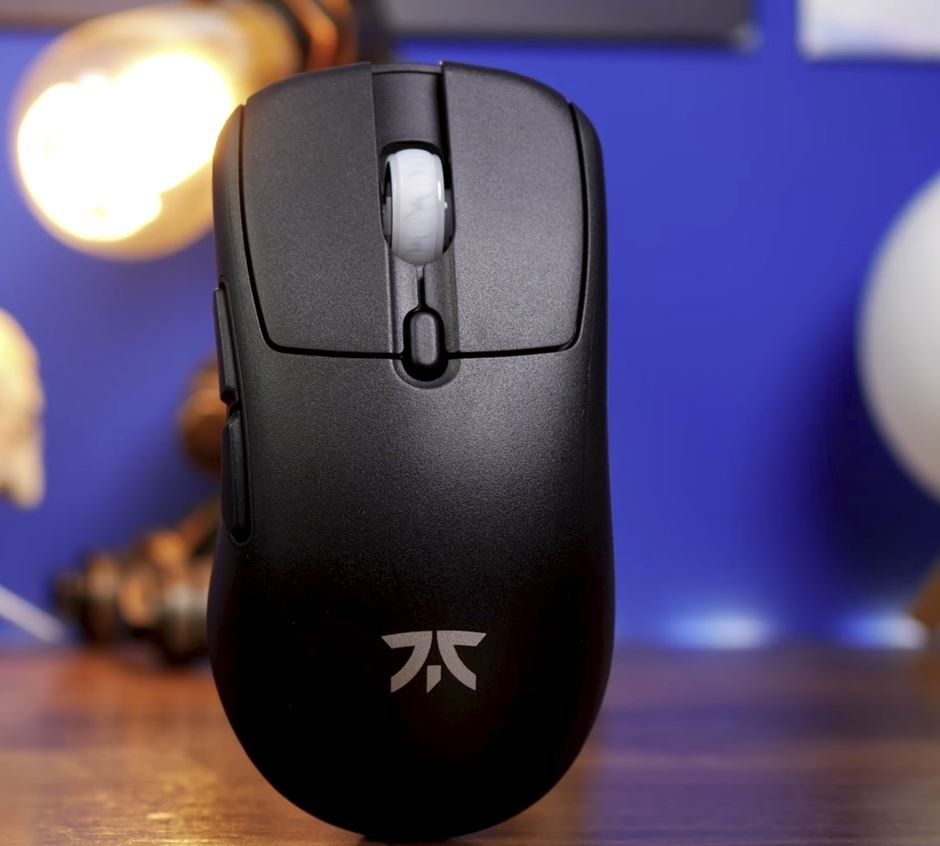 Both sides are not steeply angled or deeply recessed and can be said to be almost horizontal except for the bulge at the rear. Although the front side is slightly recessed from the centre, it does not significantly affect the fingertips’ grip, and it has an inverted C shape toward the bottom, but the angle is quite gentle.

Focusing on the width of the main body, many of these symmetrical mice taper, but the Bolt has a slightly wider tip. As a result, the fingertips of the ring finger and little finger fit firmly when the finger is laid down.

It has a cheap shape that avoids interference in a specific way of holding and can be held in any way. Although there are differences in the size, grip angle and depth of the hand depending on the person, I think it is not easy to divide the evaluation.

The build quality of Bolt is good, but only the main button remains a little uneasy.
The left and right main buttons are slightly wobbling. The shell structure minimizes it but affects the feeling depending on the pushing force and angle. For details, see the [Main Button] section. 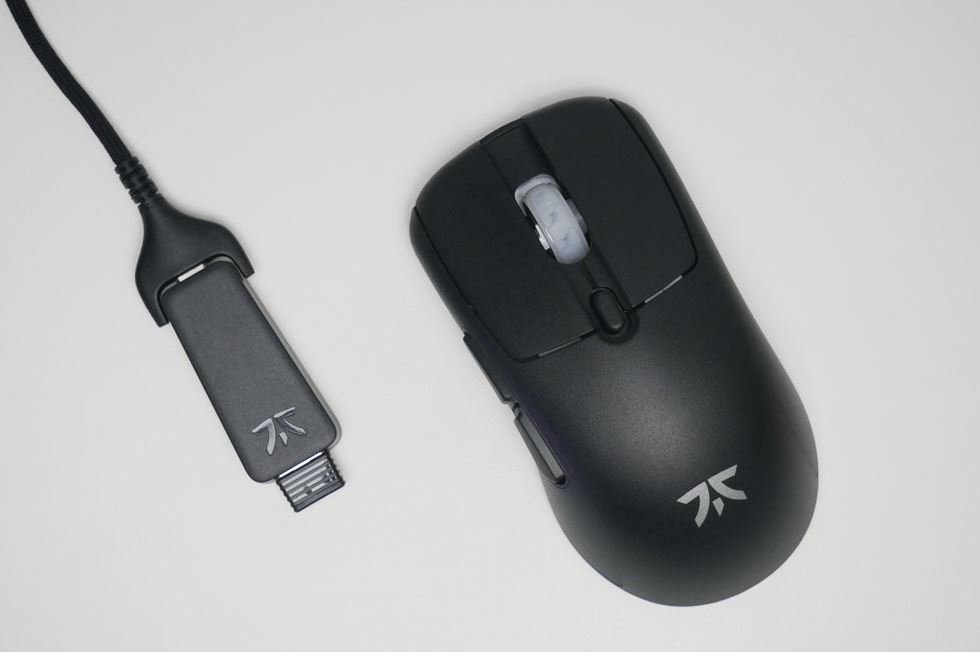 Others are fine, and the side buttons and wheels are properly installed. It is a lightweight wireless mouse with a large capacity battery and a weight of 67g, but it has high rigidity. The shell does not squeak when gripped, and no sound is heard even if the main body is shaken violently.

The nominal value was 67g (69g for the white model), and the measured value was g.
Considering that it is rigid with a solid shell and has a large capacity battery that lasts up to 110 hours, it is pretty lightweight.

Wirelessly connected gaming mice tend to be heavier than wired mice because they have a built-in rechargeable battery (or dry cell). Viper V2 Pro has a built-in battery that can operate continuously for up to 80 hours.

The surface is textured, and the texture is rough. The grip performance is low, and it works a little when your hands are dry but is slippery when you sweat. In most cases, grip tape will be needed on both sides where your fingers are slippery.

It is hard to leave marks on the touched part, and dirt from sweat and sebum is not noticeable. 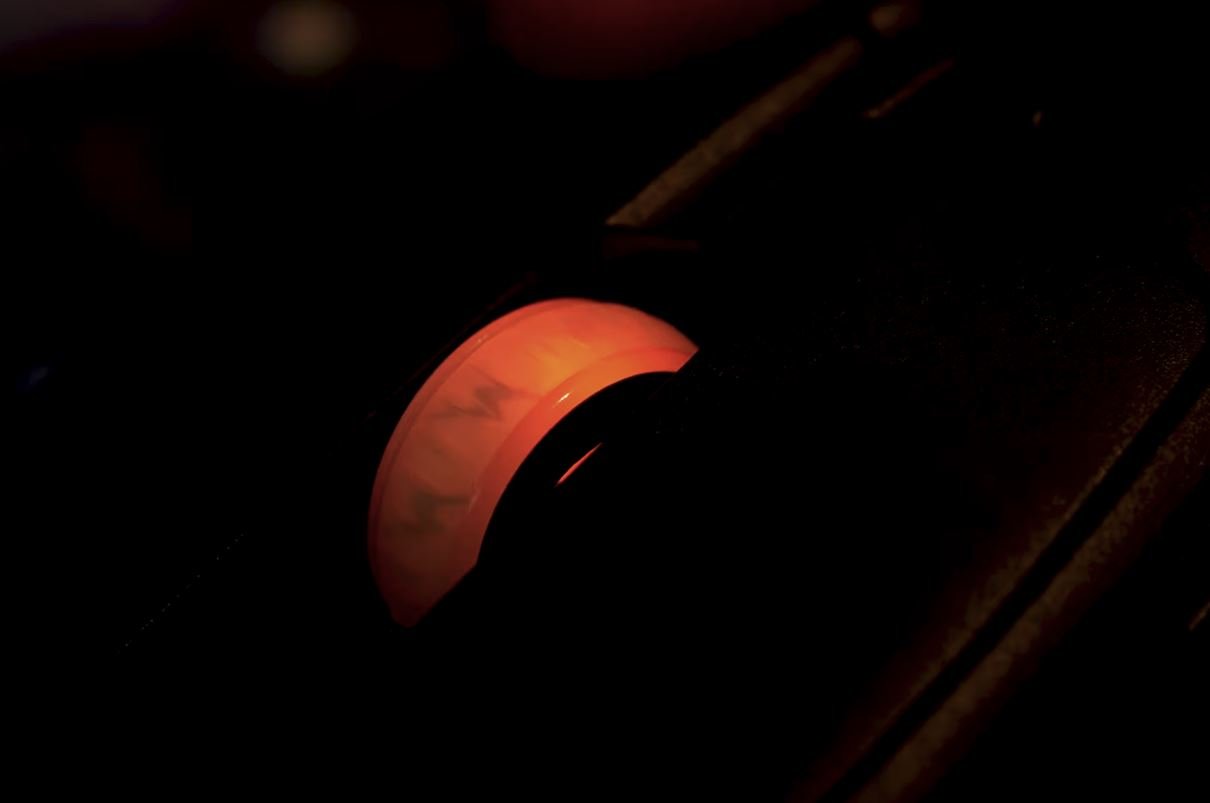 Wheel: The wheel is slightly popped out concerning the main button and is mounted lower than a general mouse. The ring is made of rubber carved horizontally at regular intervals and is easy to catch on your fingers.

The feeling of operation is neither good nor bad. It is heavy to turn and feels constantly rubbing a little. Although the notch is substantial, the outline is slightly blurred due to the rubbing during scrolling, and the feeling of separation is not so much felt.

Both continuous scrolling and fine operation in 1-notch units work well, but both are not a clear feeling for their hardness, and it can be said that the operation feeling seems different.

Wheel clicks are excellent. You don’t have to worry about malfunctions, but you should avoid assigning frequently used keys as you will have to put much effort into your fingertips. There is no deviation or distortion, and the stability is high, but it seems to be a structural problem that becomes hard enough to affect the operability.

Switch: The main button is equipped with Kailh GM 8.0. It is a micro switch that is highly evaluated mainly in the overseas community, and it is characterized by its crispness and a precise feel when pressed.

The grain is small while it is a little firm, and it feels like you have different tastes. The bounce strength is appropriate, and the crispness is good, but since the post-travel is long, I get the impression that the return is a little moody when pushed deeply due to the force of the fingers.
Also, the main button is unstable and has some glaring, which adversely affects the feeling when the button is pushed deeply. Also, hold the index finger or middle finger upright and hold the knob; if you push it from the outside to the inside, it will squeak a little.

It is a particular type with the main button, but you can see a slight change in the click feeling depending on where you press it. The firmness of pushing and the rebounding strength increase toward the front side, and it is almost uniform from the wheel to the backside. This is acceptable.

The performance in the game is good, and it can handle both burst tap shooting in FPS with high accuracy. However, although you will not feel any effect unless you apply a lot of force to your fingers, you should avoid it if you have a habit of exerting force on your fingertips to grip or locally exerting force.

Side button: The side buttons are large and stick out firmly from the main body. The edges are rounded but not at an angle along with the thumb.

Since the button layout is a little closer to the front, it works well with a cover or a knob, but with a grip, it is difficult for your fingers to reach the button on the front side due to the depth of grip, and you need to push it with the belly of your thumb.

It has a dull push feeling peculiar to a tact switch, and it feels clogged depending on the pushing angle. The firmness does not malfunction with good salt plums, and while you get more than enough tactile feedback when you press it, you’re still a little worried about assigning essential keys.

Bolt is equipped with the sensor “PixArt PAW 3370” that is often used in current high-performance wireless mice. The main specifications are 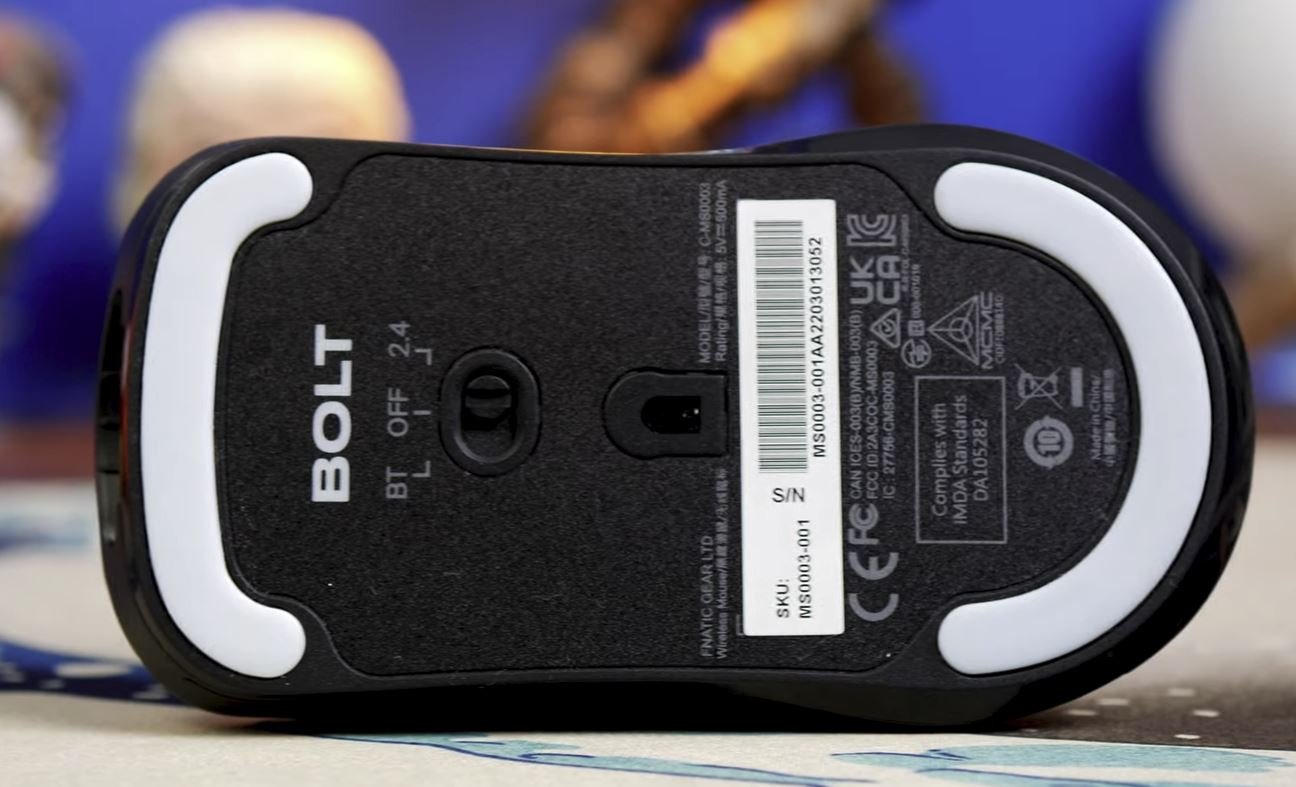 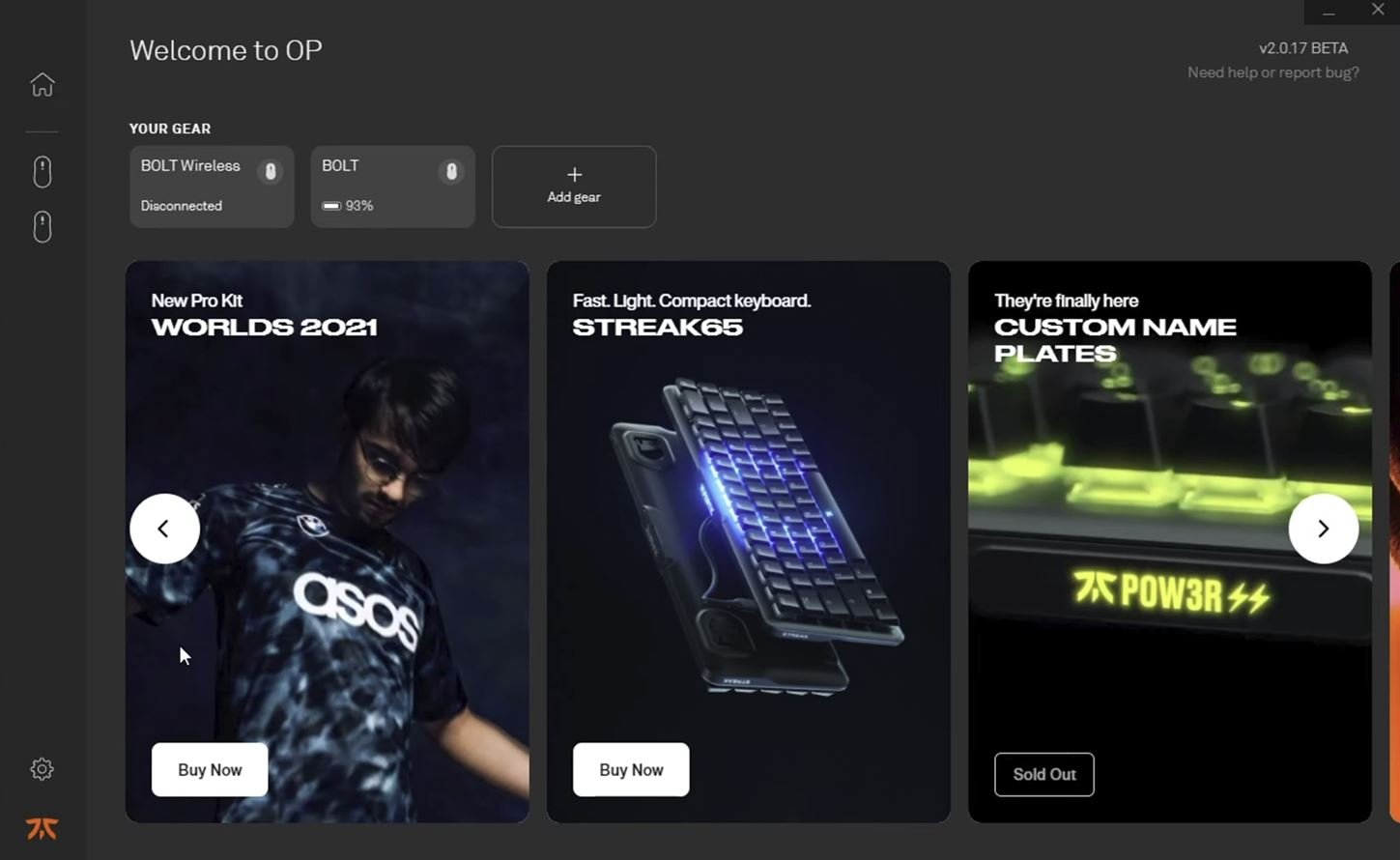 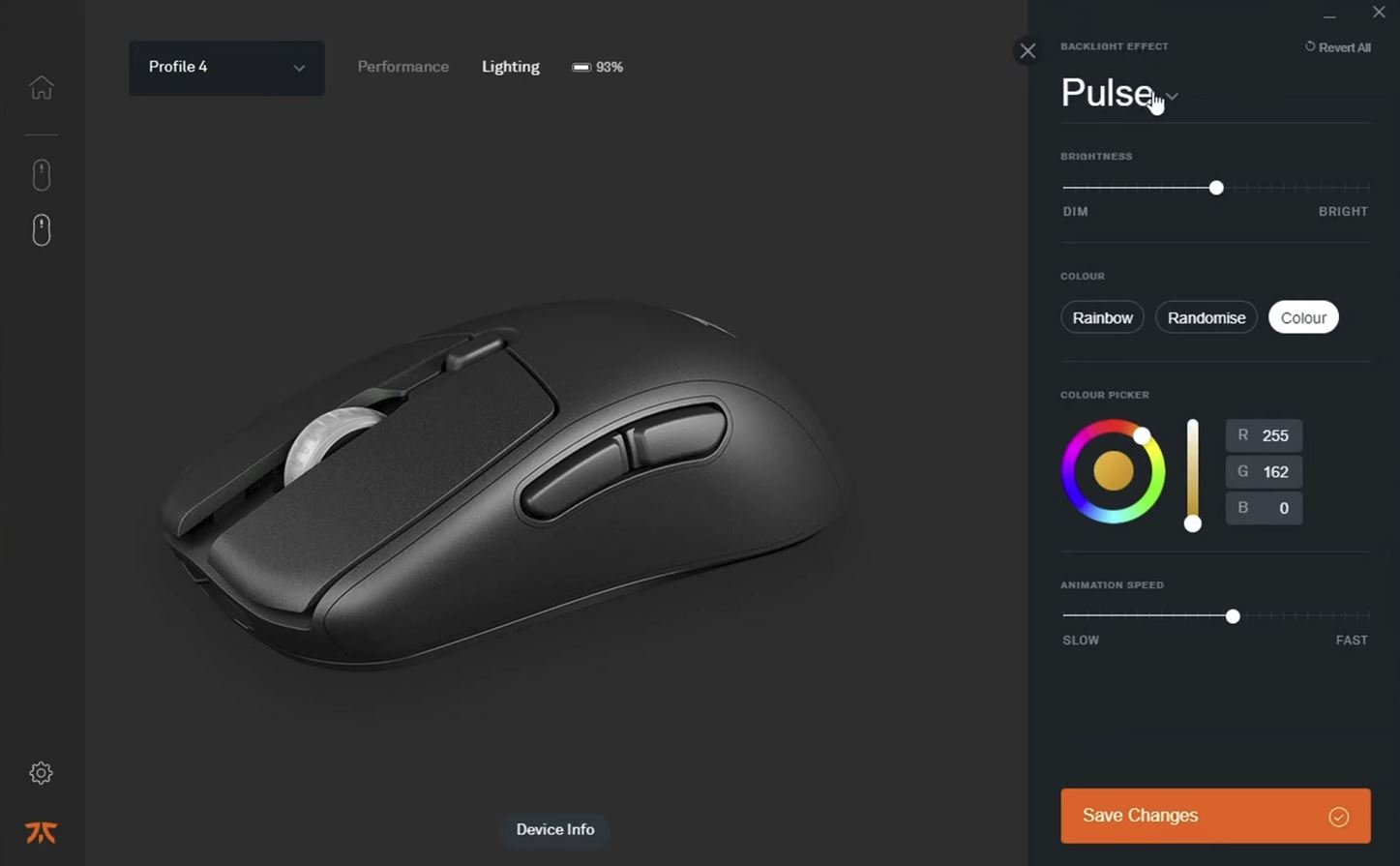 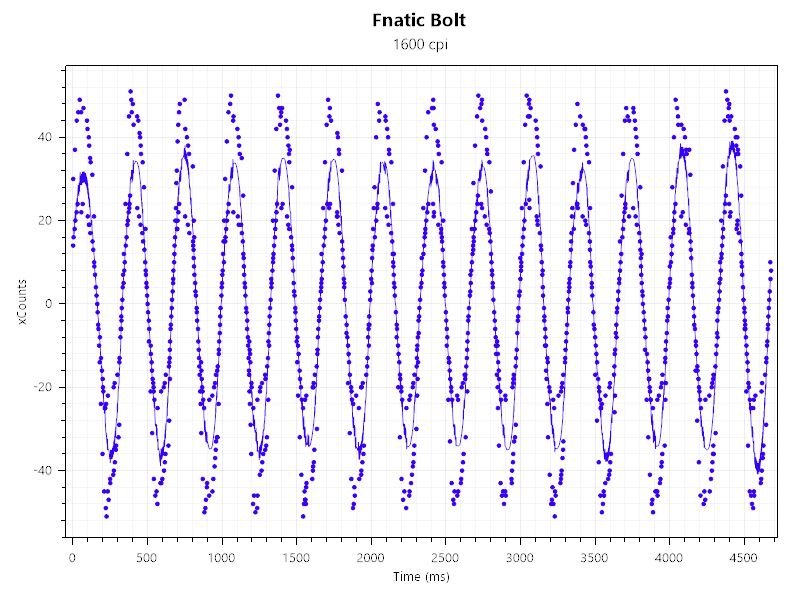 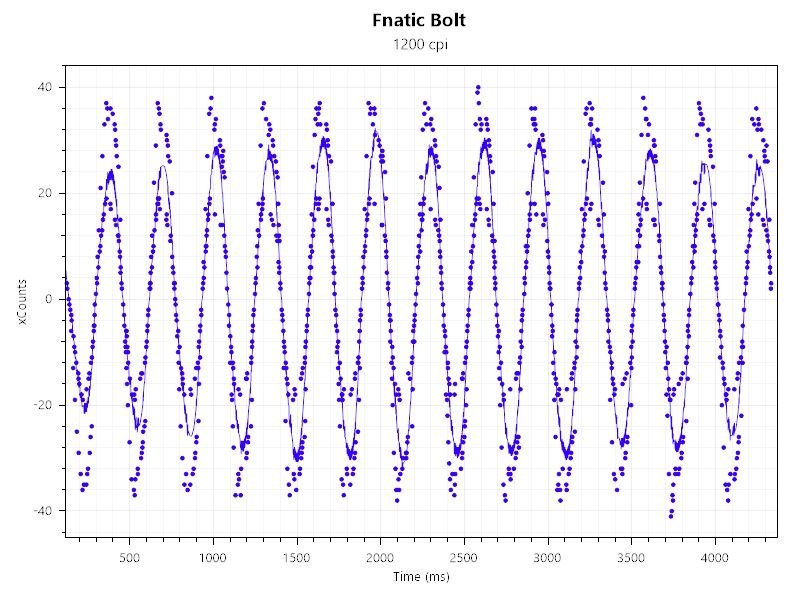 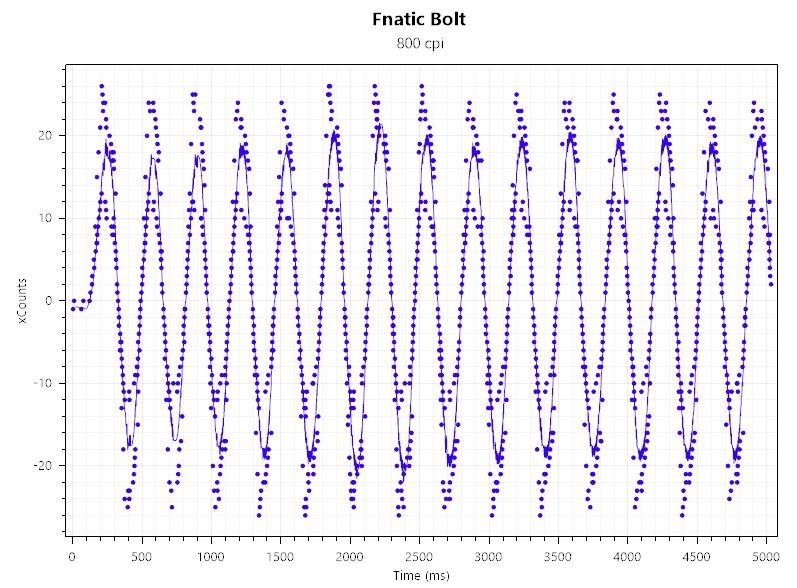 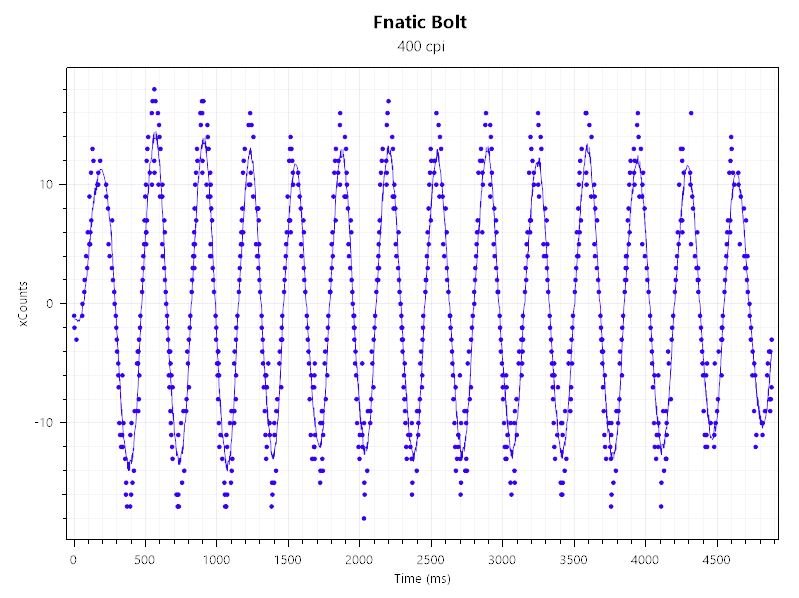 Bolt supports both 2.4GHz wireless and Bluetooth 5.1. The 2.4GHz wireless connection works by switching the switch on the bottom of the mouse to “2.4” with the attached USB dongle connected to the PC. You can also improve the stability of wireless communication by using the included extension cable to bring the mouse closer to the USB dongle.

Communication is stable when connected wirelessly, and there are no problems with long-term operation.

It has a large-capacity battery that supports continuous operation for up to 110 hours (when led off is set). After a certain period without moving the mouse, it goes into sleep mode, preventing unnecessary battery consumption.

It can be used while charging with the included paracord cable (also used as a USB dongle extension cable).

We’ve looked at “Fnatic Bolt” in detail. Although it is a small to medium size symmetrical gaming mouse, it can be held with average hand size. Although it is slightly smaller than the Logitech G PRO X SUPER LIGHT, which boasts a considerable market share, it is a very well-thought-out shape that can be said to be in the same line in that it can be adapted to all grip styles. Of course, it is also an excellent option for smaller hands.

I have a problem that the primary button is a little jarring, but it will not have an adverse effect unless I have a habit of exerting force on my fingertips to grip it or exerting it locally. However, the side buttons are dull and unstable due to the conspicuous crispness peculiar to the tact switch. It’s also a drawback that can harm performance when it comes to wheel clicks that are very stiff and difficult to push into.

It is equipped with a large-capacity battery that lasts up to 110 hours, yet it weighs 67g and is easy to handle, and the shell’s rigidity is maintained. The build quality is good except around the switch. In addition, the quality of the mouse sole is high, and some design ideas include increasing durability by a unique mechanism that provides a groove on the edge.

In conclusion, the shape of the Bolt is excellent, and if the size of the hand is small to average, you can hold it in any way. The large capacity battery and easy-to-use body weight are also attractive. However, the incomplete quality around the switch, which significantly affects the game’s performance, can be said to be a big problem for a gaming mouse in this price range. Unless you like the shape, it’s hard to say that it’s an excellent choice, and it’s a regrettable product because it has some shining parts.