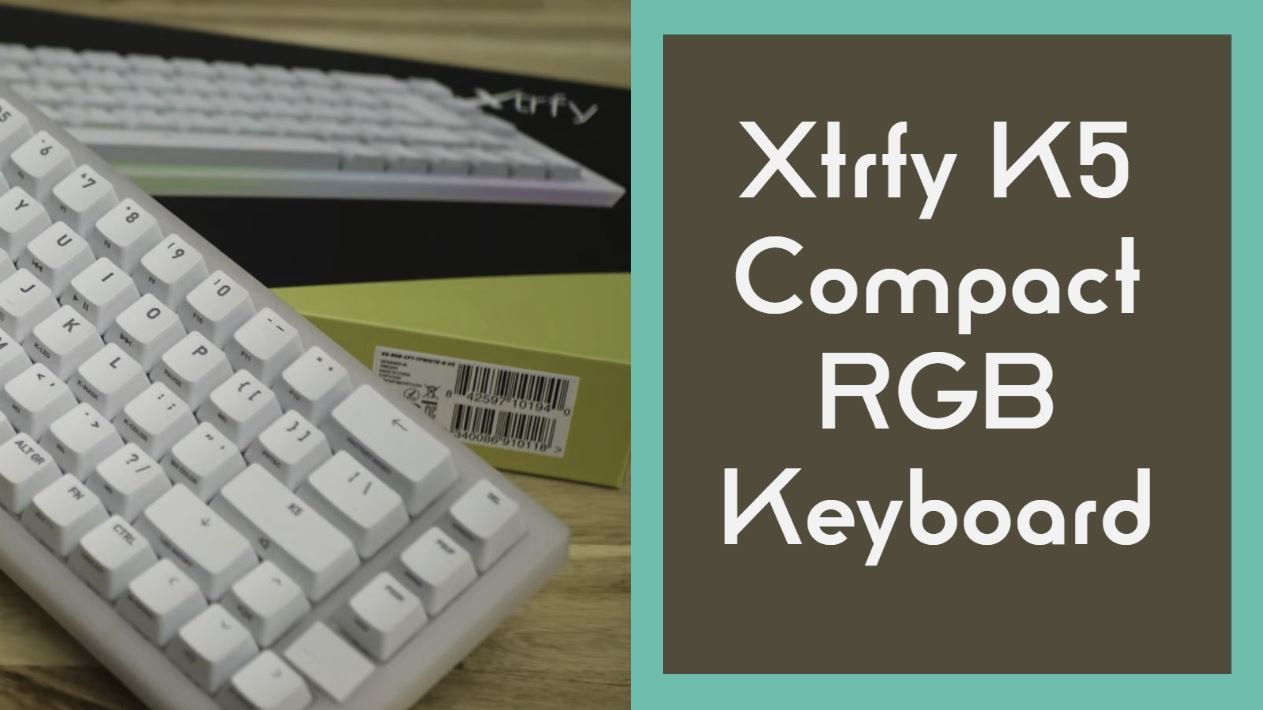 The Xtrfy K5 Compact is a small gaming keyboard with a 65% layout. Equipped with a removable translucent frame, the LED lighting is transparent to the case.

While focusing on the appearance, it supports a polling rate 2000Hz / response speed of 0.5ms, and by installing a PCB that supports hot-swap, the key switch can be easily replaced without soldering. It is rubbed from the beginning on the stabilizer. There is no compromise in the performance-related parts.

The company’s gaming mouse is equipped with innovative functions such as selecting the shape of the rear part of the main body by replacing the top shell and adjusting the weight balance by moving the battery. In this article, we will check in detail what kind of product the new keyboard of Xtrfy, which is developing products on its route, is. 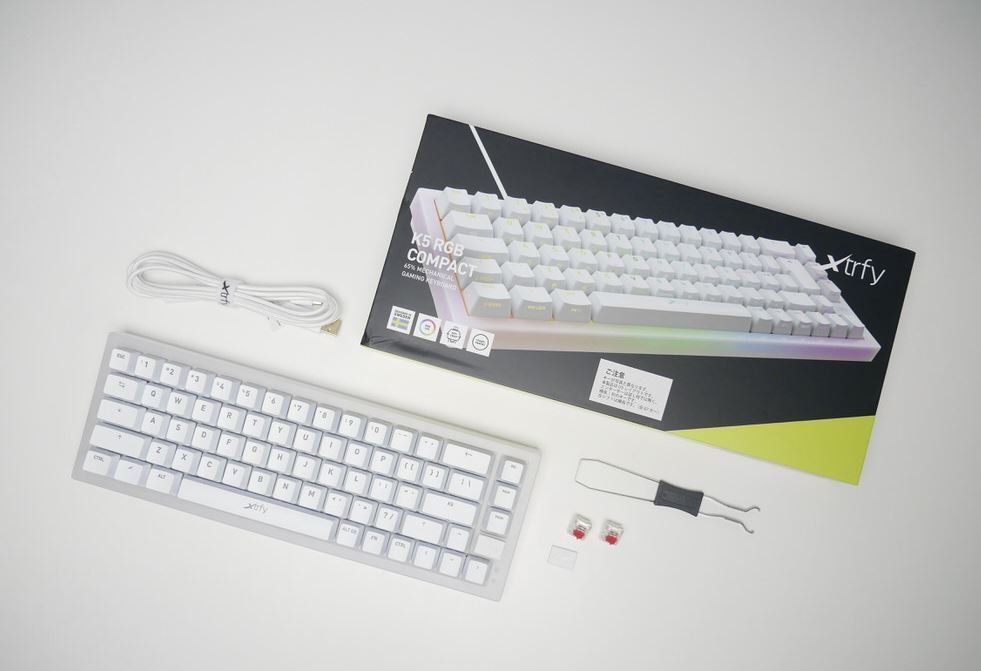 Despite the 67 keys in the US layout, the frequently used keys such as the three function keys (Delete, PageUp, PageDown) and the arrow keys remain, so it is hard to feel inconvenient even for everyday use. When I often enter sentences like the author, there are many situations where 60% is a problem, but 65% is not a problem at all.

The difference in body width is only about one key compared to 60%. It is easy to install even if the desk is small; it can secure a wide range of motion of the mouse, it does not impair convenience when key input, and it is an easy-to-use layout.

The body weight was a nominal value of 841g and an actual measurement value of 704.5g.

Since it has a moderate weight, it is firmly fixed on the desk and does not shift during key operation. If it is too light, the grip rubber on the bottom will not work well, and it will shift even if you push the main body a little.

The K5 Compact has a removable translucent frame. This allows the LED lighting to show through to the case for a beautiful visual effect. 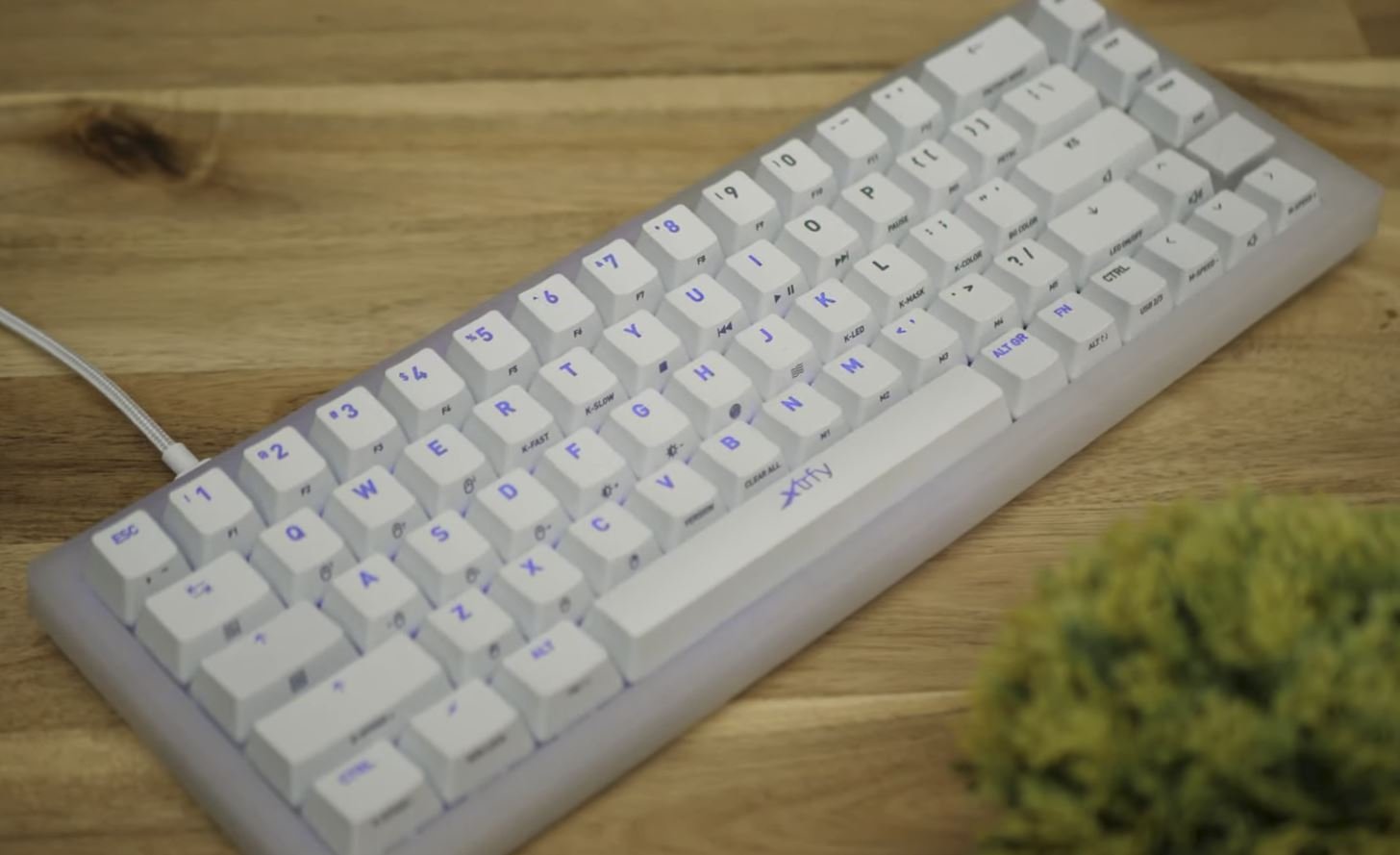 This translucent frame is fixed with claws and can be removed by simply pulling it up. It’s a little hard, but it’s easy to remove and can be firmly fixed. Remove the frame, and you’ll see a white aluminium top plate. 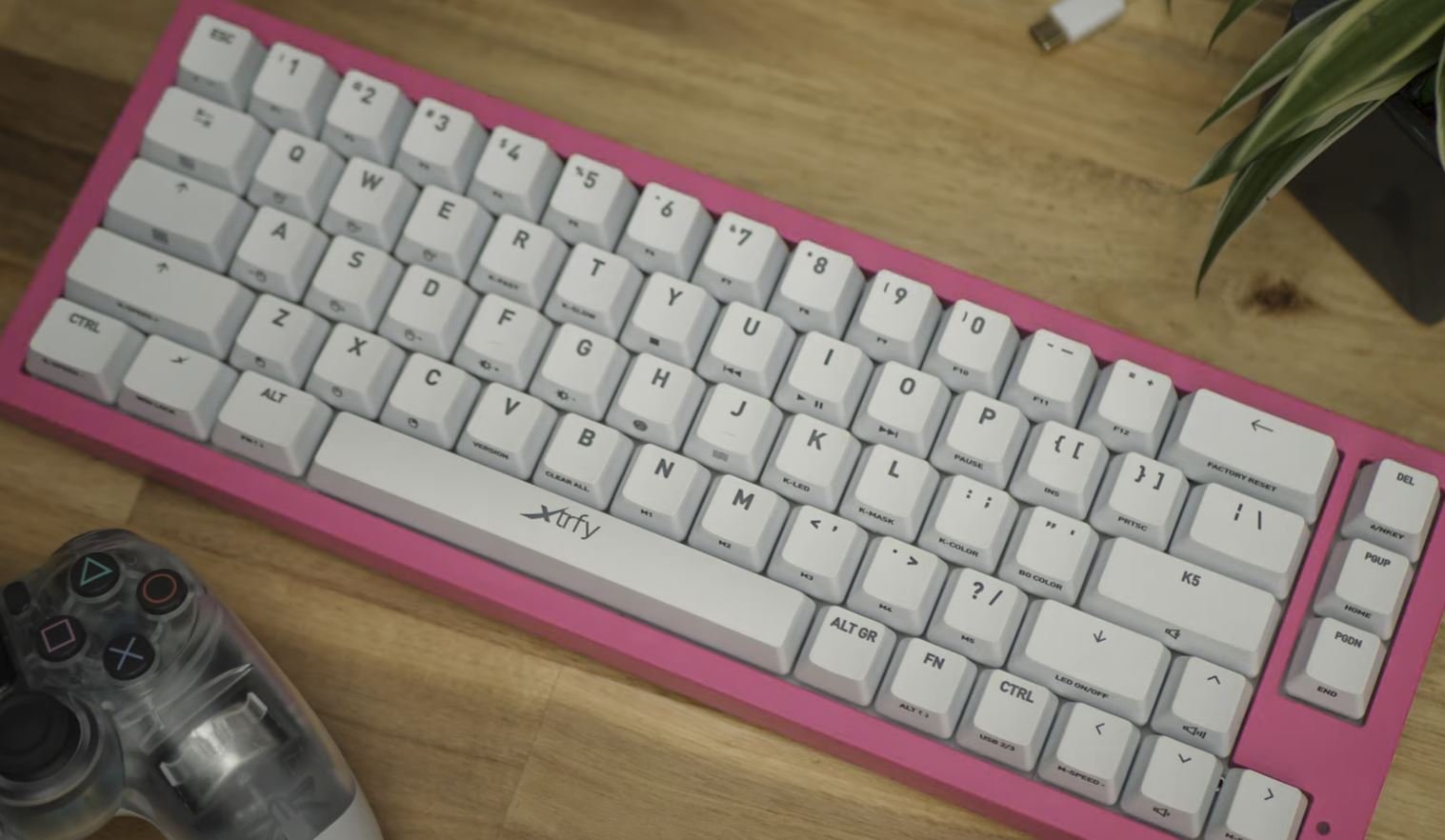 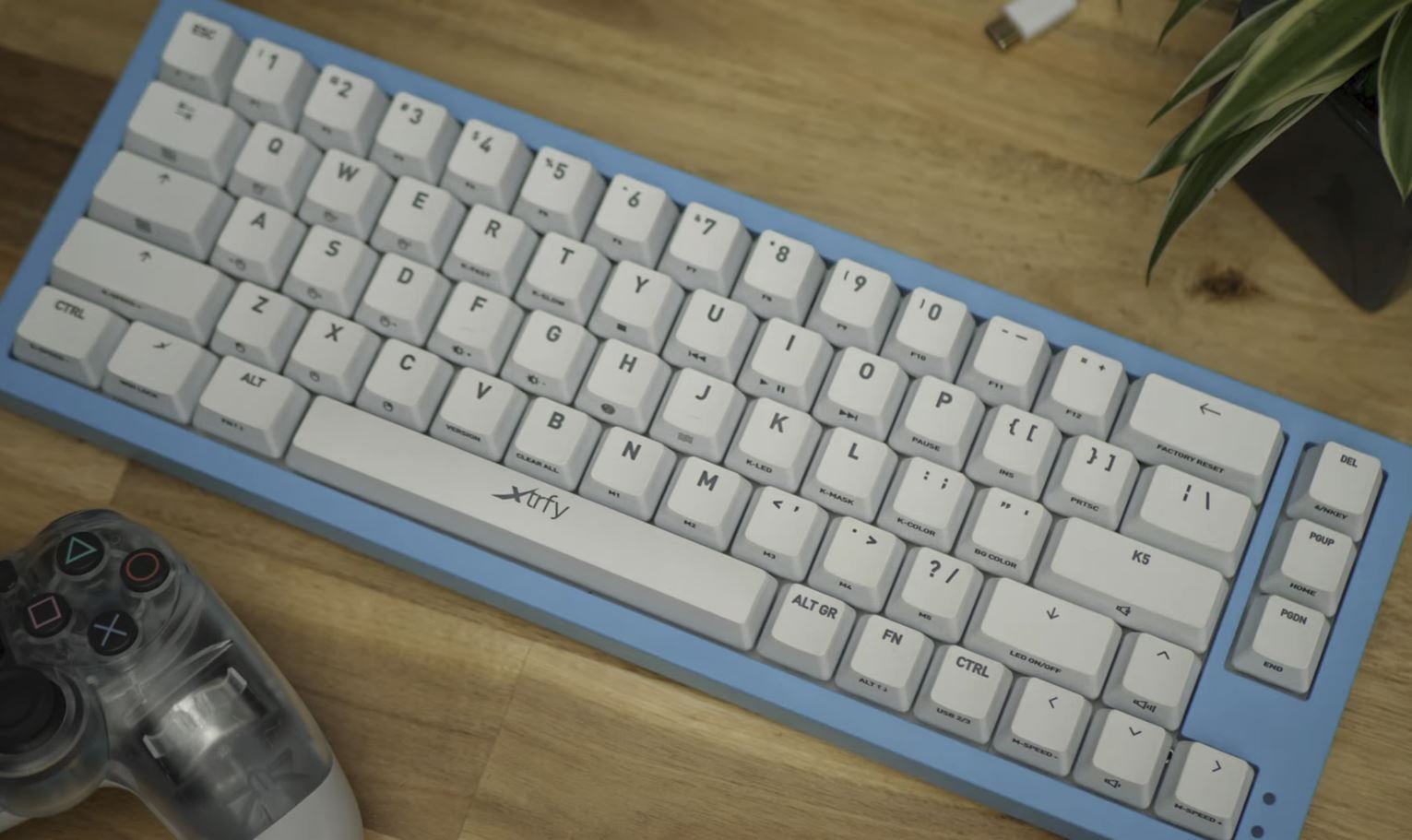 By making the frame removable, you can freely switch between the two patterns, and it is an advantage that you can adapt to your keyboard appearance preference and any play style.

At the bottom right is an LED indicator showing Windows Key Lock and Caps Lock status. The white light is lit so you can quickly identify it.

Files for 3D printing are distributed on the official website, and you can customize them to your liking.

The bottom shell is also made of translucent material. With a rectangular texture, it looks good and acts as a non-slip when lifted. Grip rubber is attached to the four corners to prevent slipping on the desk. A tilt stand is mounted on the backside.

The tilt stand has one step, and the typing angle is 4 % when the stand is laid down and 8 % when it is upright. Both are comfortable angles, so choose the one that suits your taste.

The K5 Compact incorporates a two-layer sound-absorbing foam. Specifically, it is sandwiched to fill the gap between the top plate, the board, and the base and the bottom plate. 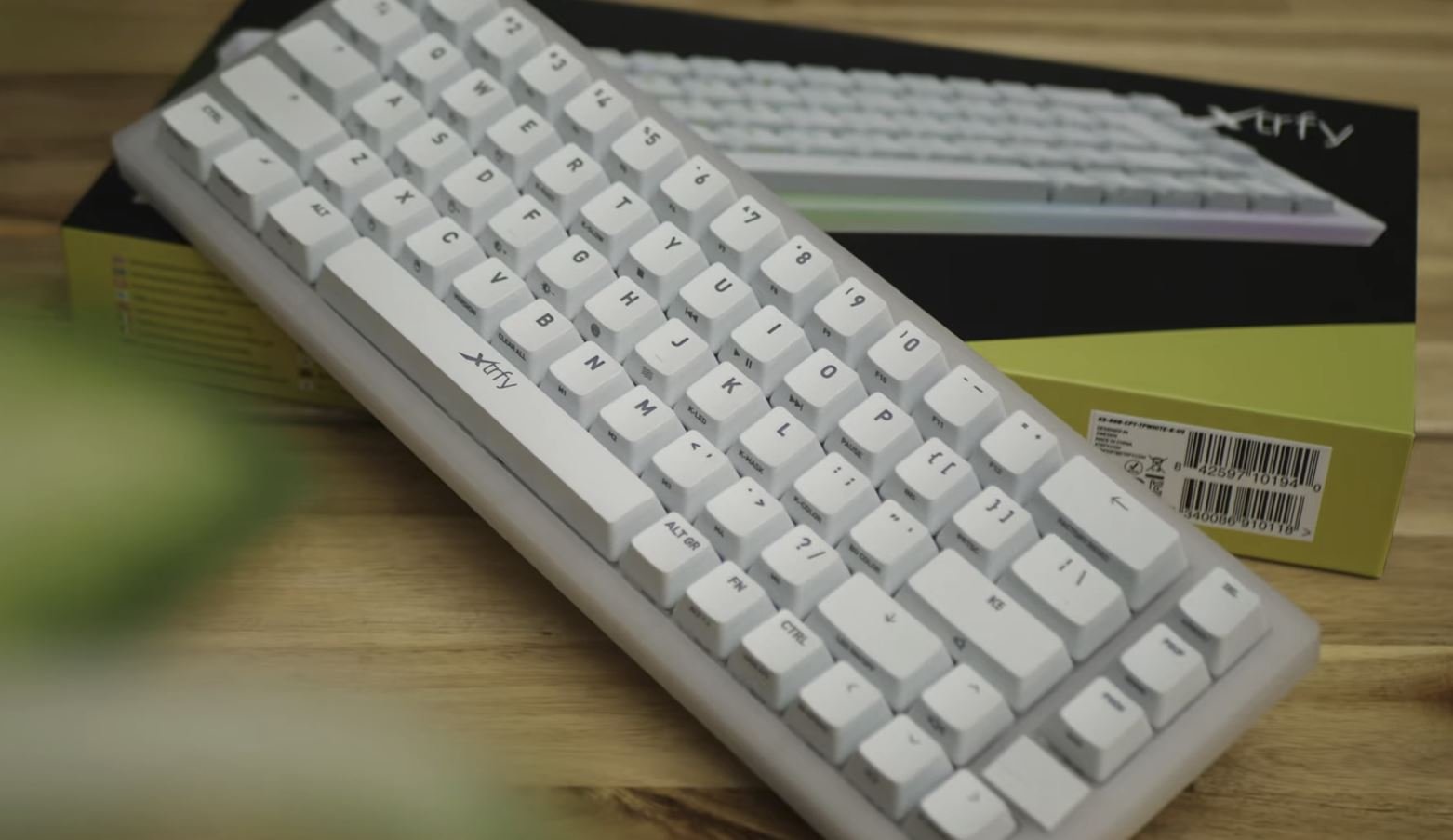 This suppresses unpleasant sounds when the presence of cavities inside generates keystrokes and reverberant sounds.

Unlike the mechanical keyboard that adopts a simple structure, the feel of the key switch itself can be felt in more detail, and a better feeling and stable key input are possible.

All stabilizers are rubbed from the beginning. Stabilizers are like auxiliary parts that you attach so that you don’t wobble when you press the end of a large key (Shift, Space, etc.). However, since the stabilizer involves contact between metal parts, it causes an unpleasant noise such as “clicking” when the key is pressed.

The stabilizer is coated with lubricant so that the impact between the parts is softened and the keying sound of big keys is soft.

Large keys such as Space and Shift are often used for everyday use and game operations, so you will feel better when typing.

Some keys aren’t familiar with the lubricant, so you’ll have to push them down a few times. Also, in my individual, the keying sound of the Space bar is a little loud. There may be individual differences in this regard, but the finish is rough. It doesn’t take much time so you can repaint it yourself.

Key switch: The standard key switch is “Kailh Red”. The main specifications are as follows. 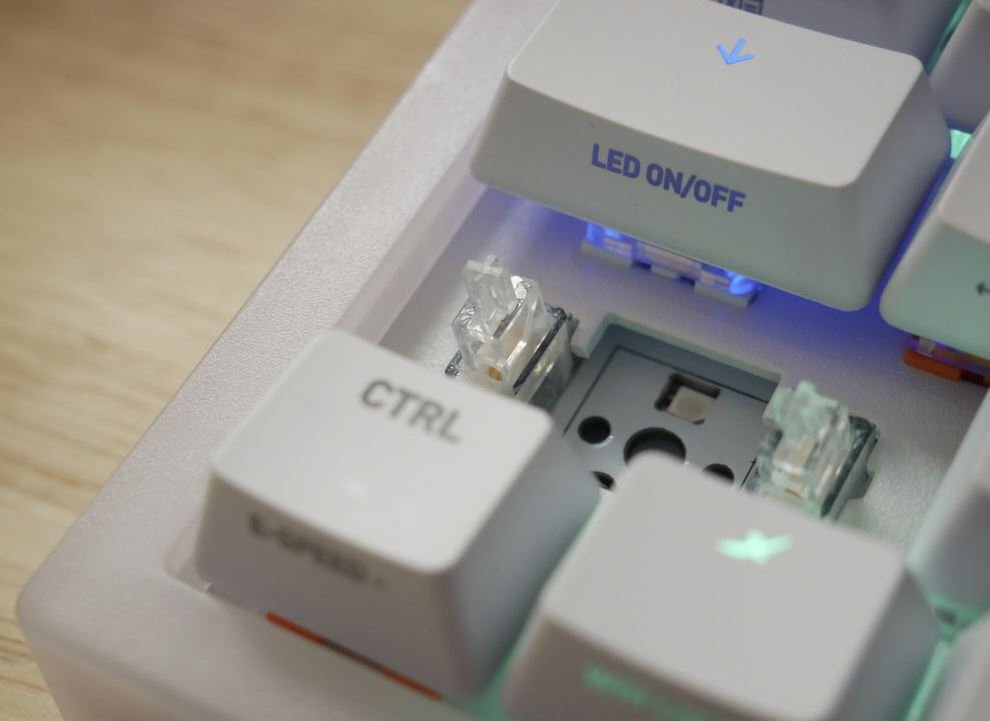 Cherry MX, a typical linear switch, has the same red axis keystroke; the actuation point is 0.1 mm shorter and is a standard key switch with no features.

This is familiar to Xtrfy keyboards, but with the redesigned components, it feels like a different keystroke than the K2 and K4.

The feeling of rubbing while pressing the key is noticeable, and the sense transmitted to the fingertips is not very good. It doesn’t feel like it’s stuck, and although it doesn’t directly affect key operations, it’s not smooth enough.

Hot swap: The K5 Compact has a hot-swappable PCB. The key switch can be removed with just the attached tool, and it can be easily installed by simply pushing it in according to the orientation of the two pins.

As mentioned above, the feeling of Kailh Red is not good. For example, if you use the same linear switch, replace it with one such as “TTC Golden Red V3” that allows the keys to descend smoothly, and the operation feeling will be more comfortable.

Hot-swappable keyboards are a good choice for gamers. There are various key switches, and you can pursue higher performance by searching for the one that suits you.

If you are willing to take the trouble, you can use the key switch—the feeling when typing is smoother, and the quietness is also improved. The rubbing feeling of Kailh Red mentioned above is also reduced.

The K5 Compact supports a polling rate of 2000Hz and has a response speed of only 0.5ms. Xtrfy calls this “Super Scan Technology”. 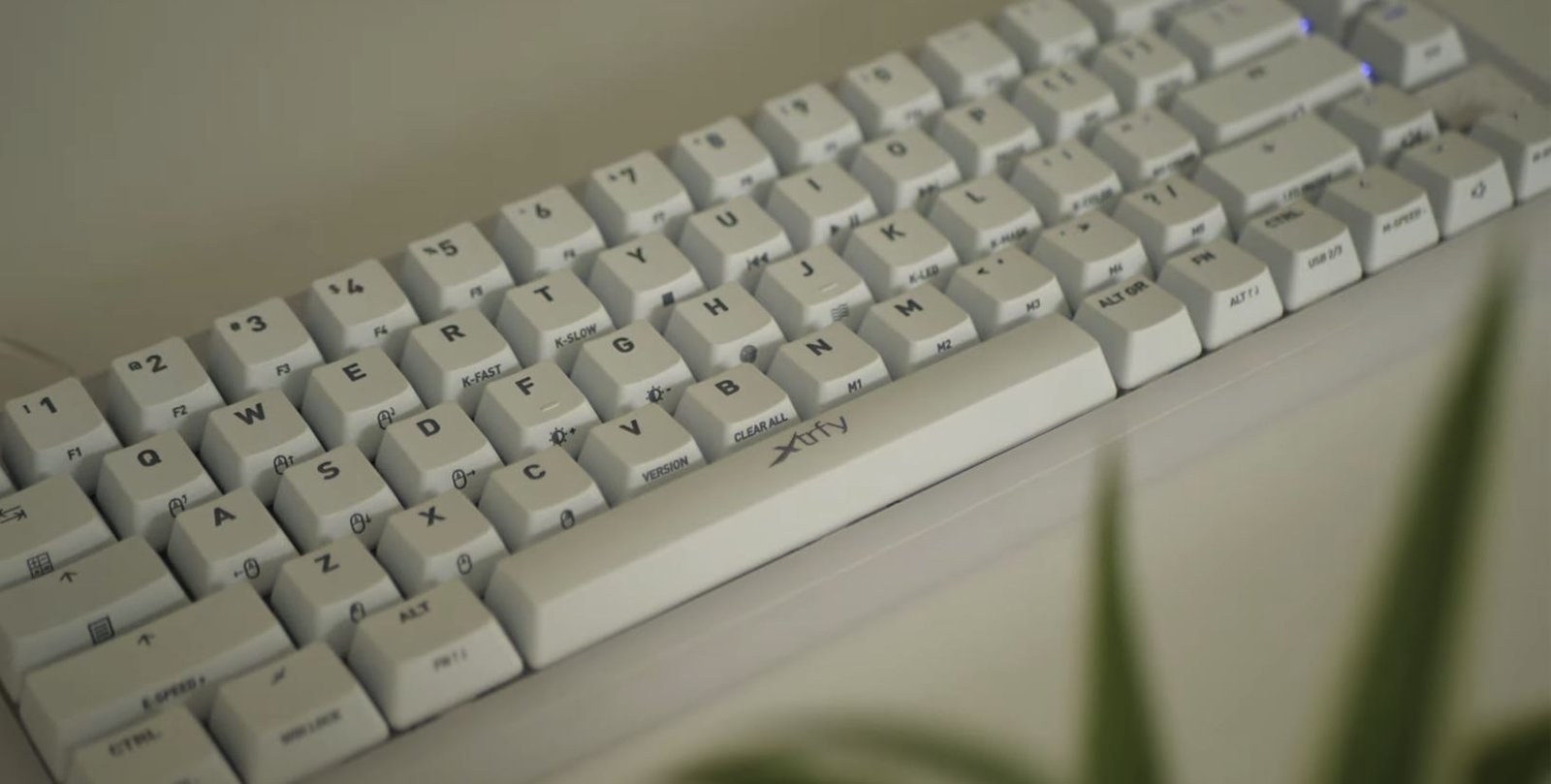 This reduces input delay and provides a faster key response than a typical keyboard. I couldn’t feel the difference in the gameplay, but in “VALORANT” and “CS: GO” where stopping accuracy is required, it may be advantageous in combination with the key switch.

LED lighting is transparent not only to the keys but also to the translucent frame, resulting in a lovely visual effect. You can enjoy more flashy effects compared to general gaming keyboards.

In addition to the 7 types of presets prepared in advance, it is possible to unify all keys with a single color or change individual key colors. All of these settings are completed only on the main unit.

The K5 Compact also has a detachable cable and a USB Type-C port on the left side of the back. A 2m long white braided cable is also very common. Since USB Type-C with excellent compatibility is adopted for the terminal on the keyboard side, it can be freely customized with any replacement cable.

Xtrfy devices, including the K5 Compact, feature driverless. No software installation is required and can complete the settings on the main unit. Detailed settings can make by pressing the Fn key and other keys simultaneously without being inferior to products that support software.

In addition to basic settings such as Windows key lock and media control, some functions increase convenience for some users, such as saving up to 5 types of macros in the main unit and moving the Fn key function to the left Alt.

We have seen in detail about “Xtrfy K5 Compact“. It is a gaming keyboard with a beautiful appearance that adopts a 65% compact layout and does not impair convenience. The LED lighting is transparent to the case by installing a translucent frame. You can enjoy two styles by removing the frame.

The two-layer foam between the PCB and the plate suppresses noise and reverberation during keystrokes. In addition, all stabilizers have been rubbed from the beginning, eliminating the unpleasant noise caused by contact with metal parts. Compared to the structure generally used for commercially available mechanical keyboards, it provides an excellent feeling of the keystroke.

It is equipped with a hot-swappable PCB, allowing users to select their preferred key switch. However, the standard Kailh Red has a strong rubbing feeling, and you can easily find a better key switch. Also, note that the standard keycap is made of ABS and is not a high-cost but wear-resistant PBT.

It’s a bit pricey, but it’s pretty much the specifications required for expensive keyboards, and the key switches and keycaps that are a concern can be easily replaced if you feel they don’t suit you. If you’re looking for a 65% mechanical keyboard with high quality and good lighting, and you find it a hassle to make, you’re a good candidate.