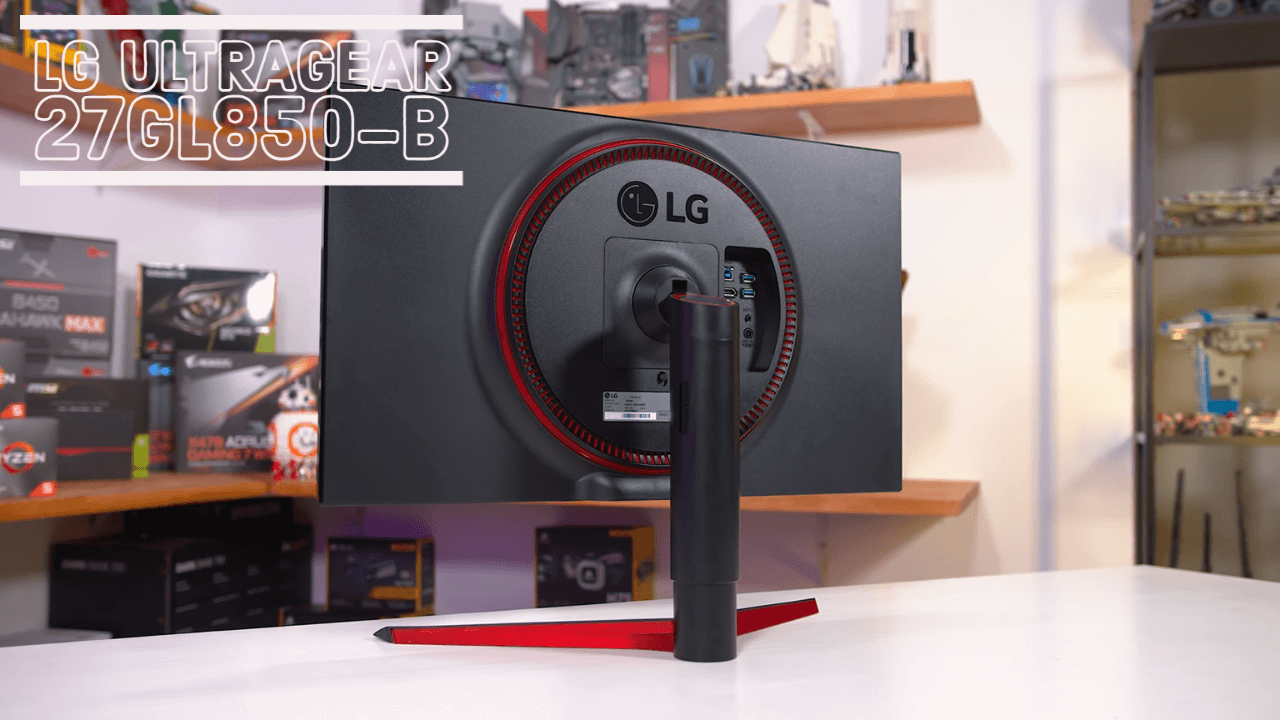 If you are looking for a new monitor, a few years ago the general rule was that gamers would buy TN panels for their higher refresh rates and fast pixel response times while creative types would get IPS tight panels for their accurate colors and wide viewing angles. Fast-forward to today and IPS refresh rates have climbed from 75 to 110 and even a 144 Hertz and now LG is claiming to have also closed the pixel response time gap with the 27GL850 1440p 144 hertz IPS monitor. So you guessed right today we will take a close look at the LG UltraGear 27GL850-B FreeSync IPS Gaming Monitor. The LG 27GL850 comes with the dimensions 614.2 x 364.8 x 56.03 mm which means it is a big size gaming monitor. Of course, because of the big size, you may think that this may be a pretty heavy one but done a good job in this case and it only carries a weight of 4.2 kg which fairly lightweight considering the size of the monitor. So let’s get into the design very similar to LG’s past offerings like the 32 GK 650 F or anything in their ultra gear line for gamers we get a flat V to stand with red highlights and a simple plastic construction reasonable bezels and that black plastic finish on both sides. So thankfully no glossy areas and easy access to ports on the RHIB it’s a simple attractive design with no matter ages game elements or pointless RGB lighting. The LG 27GL850 1440p 144 Hertz IPS monitor comes with an advertised 1 millisecond pixel response time by developing a panel with a new high-speed liquid crystal layer that promises TN levels of speed. If they pulled that off it’s an industry-first and it’s a huge deal but is it marvelous or is it marketing. It so popular well is the first IPS monitor that claims to hit TN level response times with the rated one millisecond response time. Theoretically, this display should have all the speed advantages of a TN panel but without the downsides like poor color performance low contrast ratios, and weak viewing angles when you combine that with a 27-inch panel size 2560 by 1440 resolution and 144-hertz refresh rate with adaptive sync it’s positioned as basically the perfect monitor for gaming. Its price also isn’t crazy for its offering $500 is right around the mark of other 1440p 144 Hertz IPS monitors it is around 150 to 200 dollars more than some VA offerings but this is a premium monitor with high-end hardware whereas those VM models are more a bang for buck option.

Interestingly on the front, you’ll see an Nvidia G-Sync sticker this isn’t a full g-sync monitor with the module and all of that rather it’s just a decent compatible display which means it supports the visor Adaptive-Sync standard known as FreeSync as well. So it works fine with both Nvidia and AMD GPUs for variable refresh a bit sneaky to go all out with the Qi sync branding to make you think this monitor only works with NVIDIA GPUs. But it’s just your regular Adaptive Sync display which is probably why it doesn’t cost $700 the stand is very adjustable with a good range of height tilt and pivot motion allowing you to sit in portrait orientation. There nevertheless functionality in the OSD is great we’re glad LG has simplified the Adaptive sync menu into just one toggle option.

Talking about connectivity selections there are two HDMI ports and one DisplayPort plus there are an audio output and a 2 port USB 3.0 hub which is considerably good in our opinion. Also, it doesn’t come with the built-in option speakers set up so you have to utilize an external speaker set up.

From the above table, you can be observed that this monitor requires a 240W(watts) and also it needed an external power supply to operate this monitor. Even with its flaws and some unusual quirks, the LG 27GL850 remains an exceptional and powerful monitor. This offers some hands-down most excellent IPS screen you’ve observed to time and a level of responsiveness that delivers a great path for easygoing and competing games.