MSI has a new 5K monitor in their Prestige series aimed at content creators, the PS341WU, so let’s find out what’s on offer aside from a crazy high resolution in this detailed review. The Nano IPS panel is 34 inches with a 21 by 9 aspect ratio and runs with a 5K resolution, ok well what they’re calling 5K2K, basically 5120 pixels across and 2160 pixels up, around 33% more pixels when compared to 4K. It’s just got a 60Hz refresh rate and 8ms GTG response time, so not for hardcore gamers, not that you could push many games high enough at 5K anyway.

MSI claims that the monitor has 99.5% sRGB and 98% DCI-P3 coverage, in my testing with the Spyder 5 we found 100% of sRGB, 84% o NTSC, and 89% of Adobe RGB, fairly good results. MSI also lists a typical contrast ratio of 1200:1, and we measured mine at 960:1. They note that it’s got a 450 nit typical brightness. Ghosting isn’t something we personally sensitive to, but you can see the differences between normal, fast, and fastest modes here. Viewing angles were fine regardless of angle, MSI notes that it’s good for up to 178 degrees both horizontally and vertically. As you may have noticed the screen is flat rather than curved. While that’s probably going to be preferable in many cases for content creators, we noticed that we get used to curved widescreen monitors quicker, it just feels like the corners are much closer and easier to see. The monitor is certified for DisplayHDR 600, and HDR content looked good to us. Well at least better compared to not using HDR, though we still don’t have a great deal of experience in this area. Apart from that in just about every other aspect it looked great to us, it was definitely bright enough and the colors looked excellent.

It’s offering some nice features for a monitor, granted we haven’t personally ever tested any other 5K2K ultrawide yet so we don’t have too much to compare against just yet. Overall you will surely like using it for content creation, for daily use personally, we think you’d prefer a curved screen at this length, however, if given the choice we would happily keep it over my usual 32” 4K monitor, simply because of how much better everything on-screen looked compared to my older monitor, but also just the massive space of the 5K2K resolution. 178º viewing angles do suppose to an IPS alternative, the brightness of 450 nits remains suitable and covers the space for DisplayHDR 600 certification, also the contrast remains officially rated at 1,200:1. MSI does offer some for the target audience. The IO is on the back toward the bottom and faces down. From left to right there are two HDMI 2.0 outputs, DisplayPort 1.4, Type-C DisplayPort, USB 3.2 Gen1 Type-B port which is the input from your PC to use the rest of the Type-A ports, followed by a USB 3.2 Gen1 Type-A port, and 3.5mm audio jack. To use the 5K resolution at 60Hz you have to either use DisplayPort, or the Type-C port which is also DisplayPort, the HDMI port only supports up to 4K at 60Hz. The power input is found towards the left and there’s a clasp for holding the cables in place, and this area gets hidden by a white plastic cover. There are two more USB 3.2 Gen1 Type-A ports on the left-hand side of the screen, along with a mic in and headphone out, and even an SD card slot which was nice to see.

From the above chart, you can observe the power consumption of this monitor which consumes a 100 to 240 VAC, 50 / 60 HZ of power which fairs for this size of the laptop, and also it has an internal type of power adaptor which may be convenient for some users. While not cheap, it’s offering some nice features for a monitor, it does offer good features set and it a good choice for the content creator and video or photo editor also if your using this laptop for daily use at home or in the office then also it performs very well. But for gamers, it’s not a perfect choice so if you want to use this monitor for playing the game it is not for you. 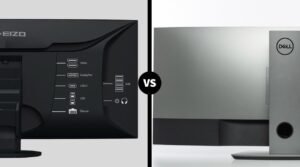